With the great and the good of the professional cycling world about to set off on the 100th Tour de France, we’re jumping on our bikes for 10 classic cycling films. 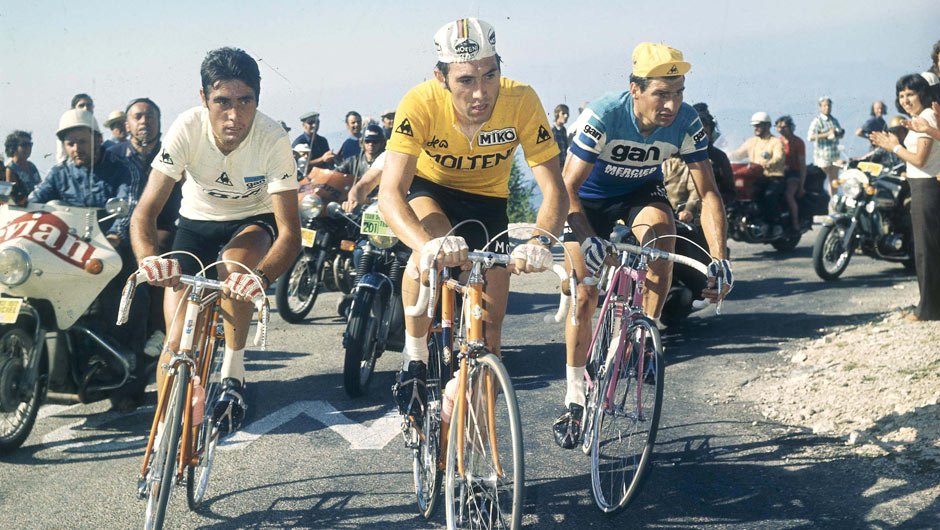 Each year the stars of professional cycling battle it out for the ultimate prize on two wheels, the Maillot Jaune of the Tour de France. Like the film director who conducts his or her actors in a grand cinematic orchestra, the cycling directeur sportif nurtures their crop of riders, seeking to get the best out of them as they ride at the limit of human endeavour.

Over the years many illustrious filmmakers have explored the world of cycling, with excellent documentary films about the Tour from Claude Lelouch (Pour un Maillot Jaune, 1965), Louis Malle and Jørgen Leth (see below). The sport has also provided inspiration for a number of Hollywood fiction films, notably Peter Yates’s Breaking Away in 1979, for which writer Steve Tesich won an Academy Award for best original screenplay. Tesich went on to write American Flyers (1985), which featured a moustachioed, pre-stardom Kevin Costner. It didn’t replicate the success of Breaking Away, but still has a place in the history of cycling films – though sadly it’s not available on DVD in the UK. The following year saw an American invasion of the Tour de France, with the arrival of the first US cycling team, 7-Eleven, plus the first American tour winner, Greg LeMond, riding for La Vie Claire.

Like a modern pro-team, our list of cycling films features a good mix of nationalities, with representation from Britain, France, USA, Belgium, Italy and Denmark – as well as a mixture of fiction and non-fiction. Not all the films included feature professional riders, as we’ve gone wider to include great films with bicycles as a key plot device. Modern British offerings are few and far between, but perhaps the recent success of Bradley Wiggins and Mark Cavendish will inspire a new raft of Brit flicks on the subject. For now, adjust your saddle, pump up your tyres and take a tour of 10 great cycling films. 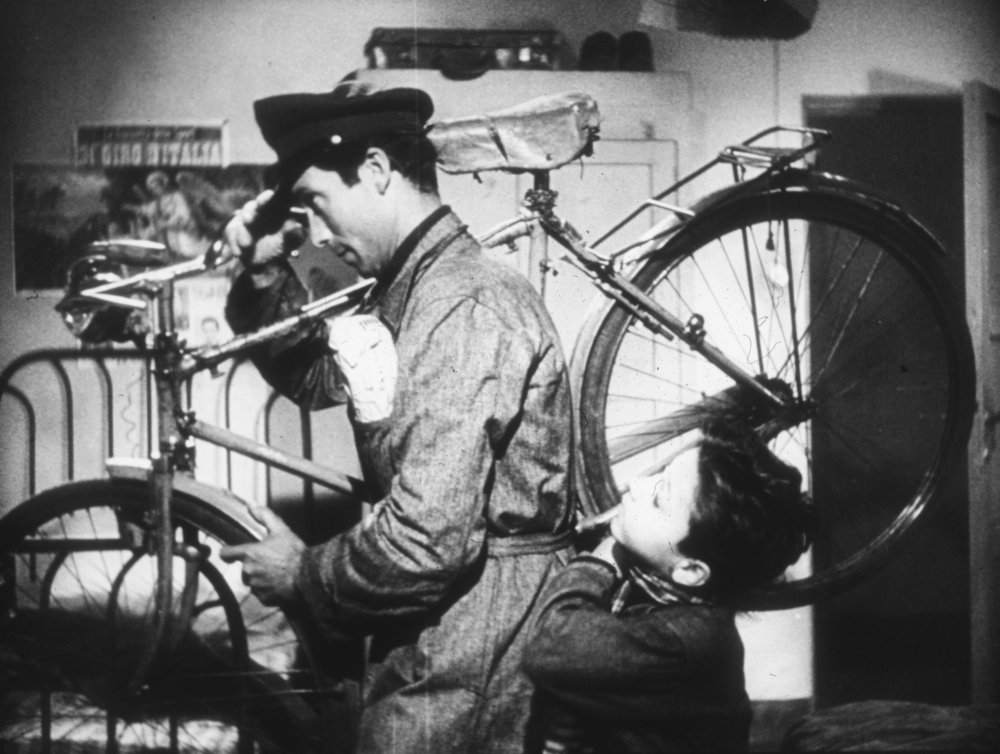 No list of bicycle-centric films would be complete without mention of Vittorio De Sica’s masterpiece of Italian neorealism. Set in post-war Rome, it follows the misfortunes of down-on-his-luck Antonio (played by Lamberto Maggiorani) and his young son Bruno (Enzo Staiola). Over the course of the day they embark on a fruitless hunt for the father’s stolen bike, which he desperately needs to work and support the family.

In 1952 Bicycle Thieves topped Sight & Sound’s inaugural greatest films poll and remains a favourite among both critics and audiences today. 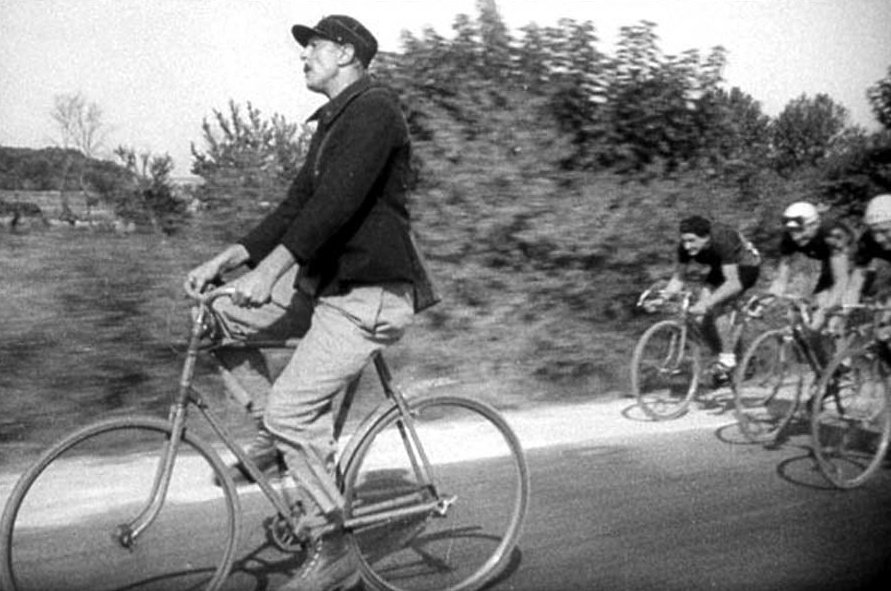 Jacques Tati’s feature debut follows the mishaps of a French rural postman, François, played by Tati himself. Under the influence of too much wine and after viewing a film about the modern methods of the US postal service at the village fair, he goes to extreme measures to speed up his own postal delivery. Slapstick hilarity ensues, with one scene featuring François struggling to ride his bike while inebriated and another where he inadvertently joins a bike race against amateur racers, eventually ending up in a river.

Shot in a pioneering colour process called Thomsoncolor, but released only in black and white, Jour de fête was recently restored. A sparkling comedy and satire about our dependence on technology, something which became a dominant theme in later Tati films such as Mon oncle (1958) and Playtime (1967). 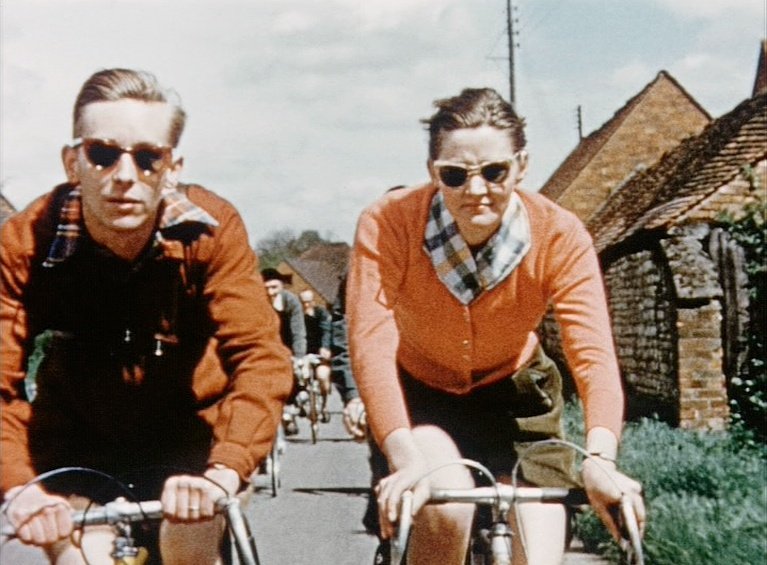 A novel film about how British Railways can cater for audax or touring cyclists, which can be found on the second of the BFI’s DVD compilations of British Transport Films. Probably one of the first films to make reference to the cycling ‘bonk’, when a rider doesn’t take on enough food, this short colour film provides a comprehensive guide to bicycle touring around Britain.

In the words of H.H. England, editor of Cycling magazine, “a cycling tour without a map is like new potatoes without the smell of mint”. Although a map in the jersey pocket is on the decline with the advent of GPS, this wonderful short film still feels relevant today, especially for anyone who’s experienced the freedom of hopping on a train with their bike to discover the great British countryside. 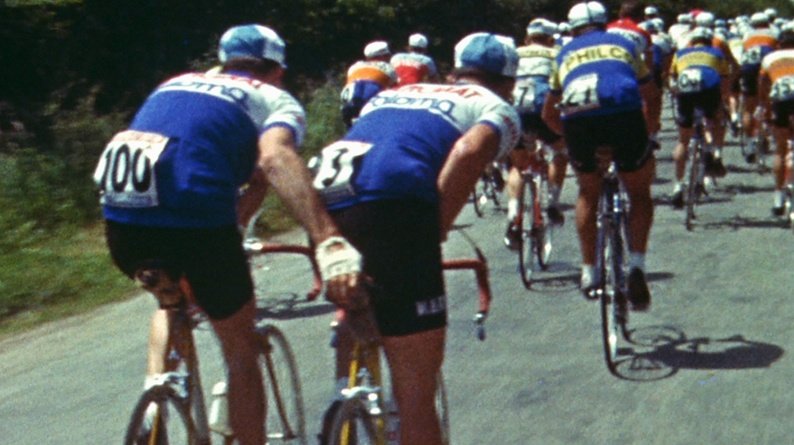 After co-directing the 1956 undersea documentary Le Monde du silence with Jacques Cousteau (which won them both the Palme d’or at the Cannes Film Festival), French director Louis Malle further made his name with classic fiction films such as Lift to the Scaffold (1958) and Zazie dans le métro (1960).

In 1962, he returned to the ‘real world’ (and a favourite pastime of Malle’s) for this short, 18-minute document of the Tour de France, the most watched sporting event in France. This quick-cutting documentary is an intimate portrait of the sport and the rigours of the Tour, seen through the eyes of the everyday man. It also serves to highlight the difference in attitudes to sport nutrition between the 60s and today, with the support riders or ‘water carriers’ stopping at bars to gather red wine, champagne and beer for the rest of the team. Malle’s film is a short but important piece of cycling documentary history. 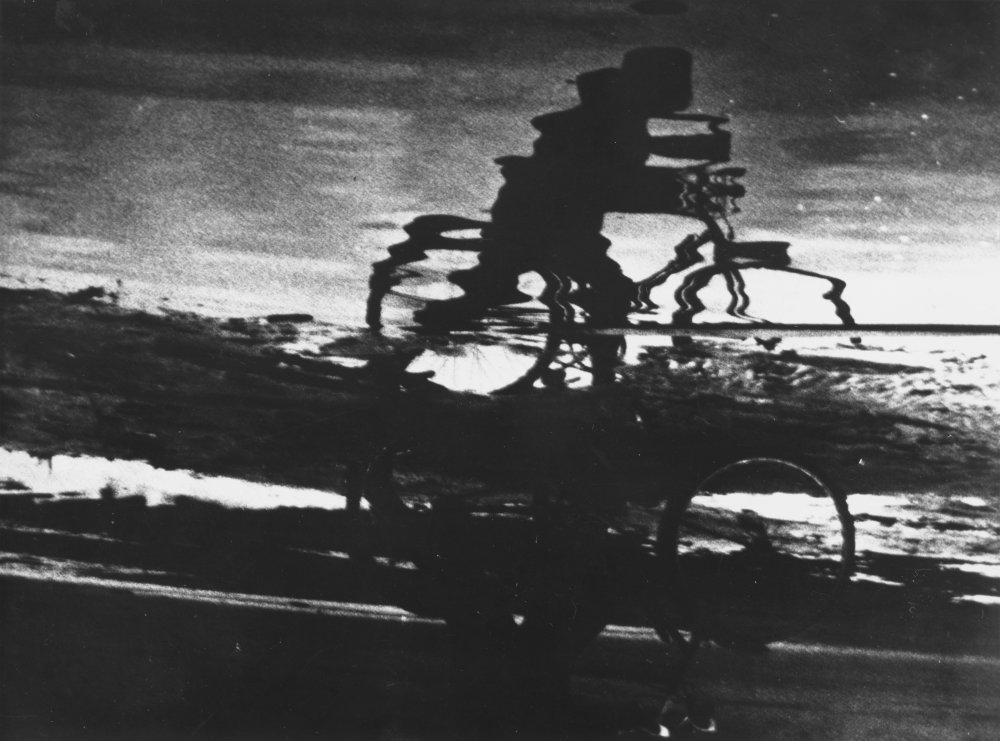 Ridley Scott’s first film – featuring his younger brother, the late Tony Scott, as a schoolboy playing truant for the day to meander around Hartlepool on his bicycle – is a far cry from his recent sci-fi juggernaut Prometheus (2012). Taking inspiration from James Joyce’s Ulysses, Scott employs a stream of consciousness that reveals the everyday thoughts and frustrations of the teenage schoolboy.

Scott shot in black and white on a Bolex 16mm cine-camera while studying photography at the Royal College of Art in London in 1962. In post-production, Scott was able to secure a score from John Barry, with the composer recording an original piece after being impressed with the young filmmaker’s work. 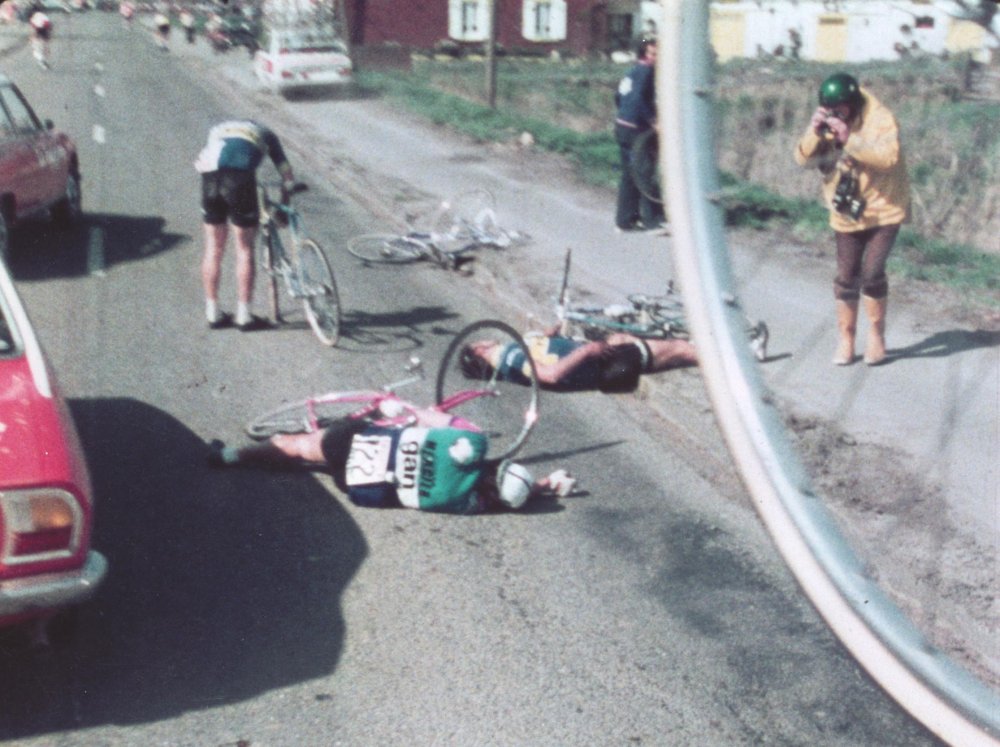 Featuring a superb opening sequence of a mechanic cleaning his bike, this Danish documentary is directed by Jørgen Leth (mentor to Lars von Trier), who commentates on the Tour de France each year for Danish television.

Covering the 1976 Paris-Roubaix race, which runs along the legendary pavé cobblestones of northern France, nicknamed ‘the hell of the North’, it features the stars of the day: Eddy Merckx, Francesco Moser and Roger De Vlaeminck.

Just one of several sports films that feature among Leth’s work, A Sunday in Hell wonderfully captures the poetry of cycling, documenting the array of star personalities, the emotion and excitement of the fans, the noncompliance of the protesters (who stop the race) and the contrast between the glory of victory and the suffering that comes with defeat. 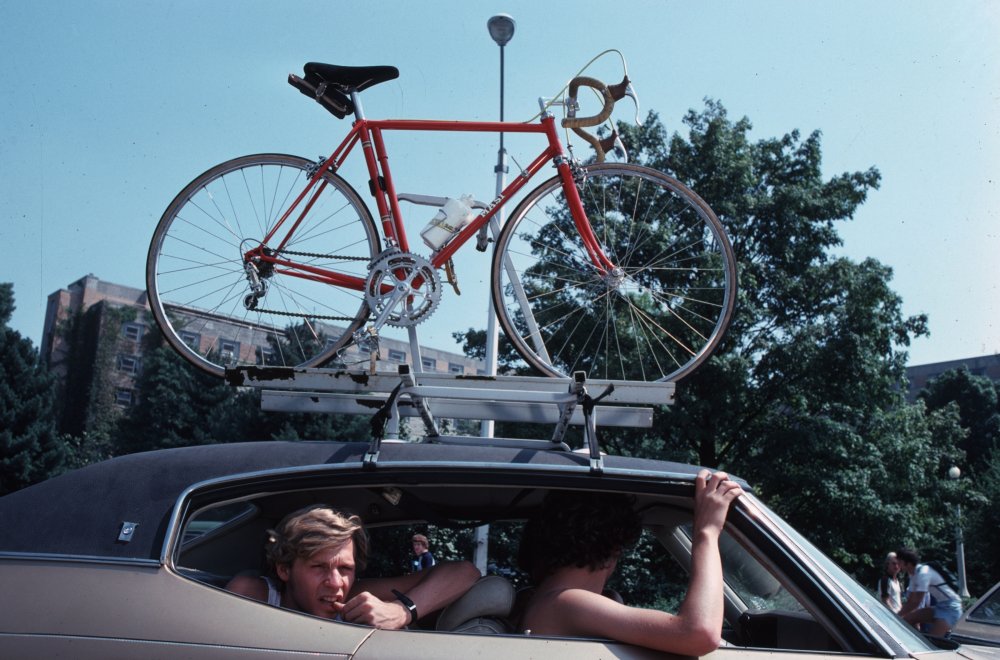 As cycling grew ever more popular in the US, it was only a matter of time before Hollywood made a major picture on the sport. Enter Breaking Away, Bullitt (1968) director Peter Yates’s coming-of-age tale about a group of friends in Bloomington, Indiana.

Among their ranks is promising amateur cyclist and Italophile Dave Stoller (Dennis Christopher), who worships Italian cycling and renames the family dog Fellini (much to his father’s annoyance). Disparagingly referred to as ‘cutters’ by the lndiana University students, because of Bloomington’s stonecutting history, the friends have several hostile encounters with the snobbish students, culminating in a cycle showdown at the university’s Little 500 race – a real event that takes place on campus each year.

Comparing favourably with The Last Picture Show (1971) as a representation of small-town America, the film was a critical and commercial success, grossing $20 million in North America. 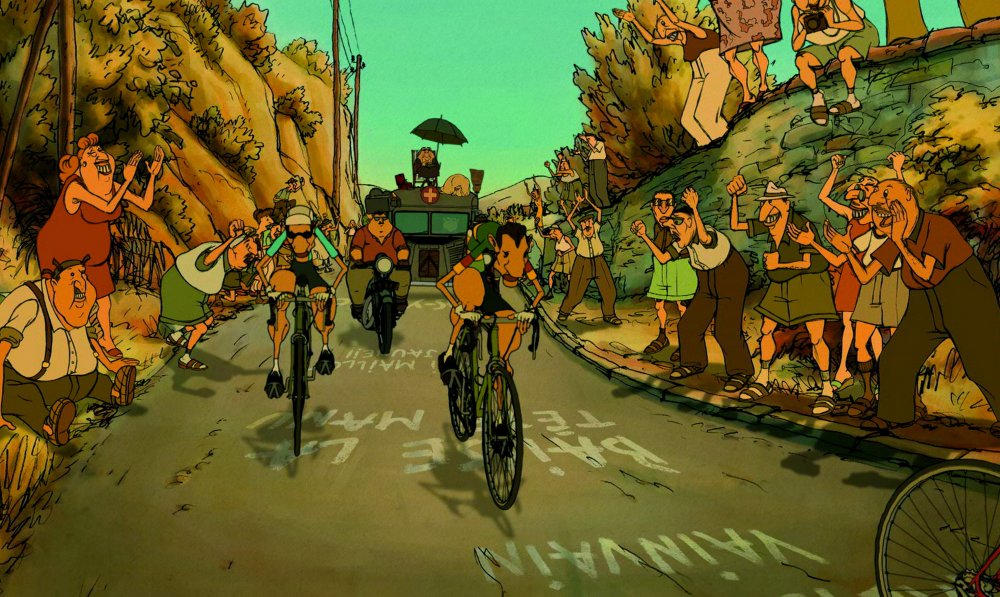 A deliriously demented vintage cabaret show by the triplets of Belleville sets the tone for this French animated picture (known as The Triplets of Belleville in some countries) by Sylvain Chomet. It’s the story of a young boy called Champion who lives a lonely life with his grandmother Madame Souza and only begins to realise his potential when he receives the gift of a bicycle. Several years later, Champion has developed into a handy bike racer, with his grandmother acting as a trainer, applying unconventional leg massages with egg whisks. On Champion’s maiden tour he’s kidnapped by French gangsters and Madame Souza and pet dog Bruno embark on an adventure to Belleville to rescue him.

Chomet creates a fantasy world with a unique style of animation that pays homage to the anime films of Studio Ghibli. There’s also a playful cycle-cap tip to Jacques Tati (who Chomet later brought to life in The Illusionist, 2010) with a scene of the triplets watching Jour de fête in bed. 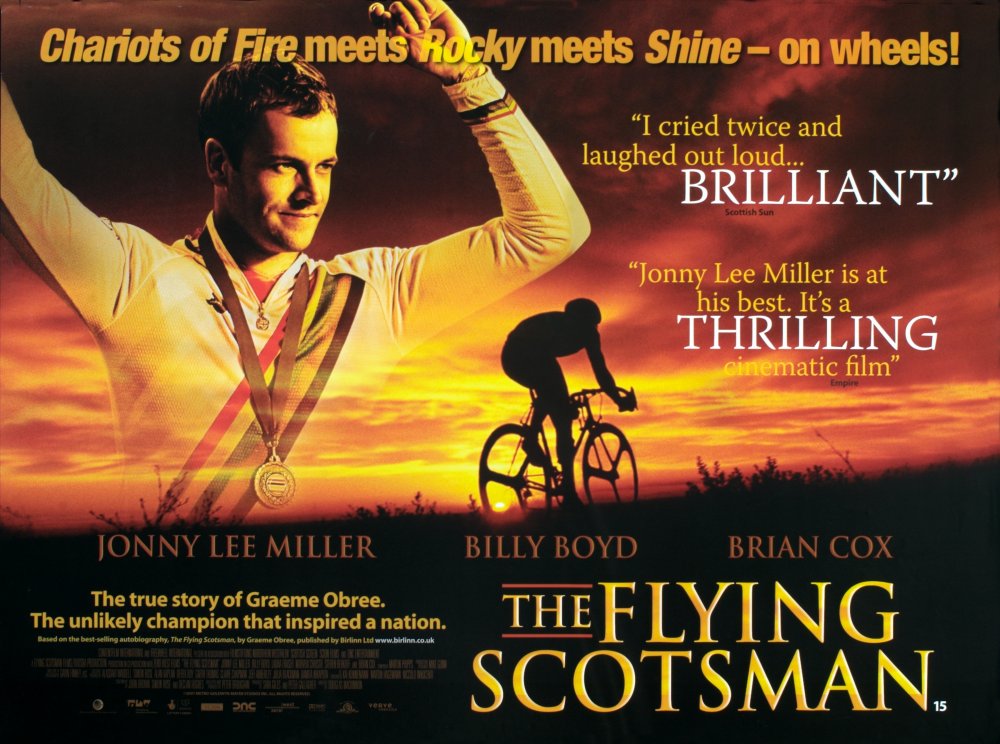 In this 2006 British biopic, Jonny Lee Miller plays the Scottish cyclist Graeme Obree, who twice held the World Hour Record and was World Champion in the 4000m pursuit in 1993 and 1995. The film depicts Obree’s battle with the establishment – represented here by the fictional cycling body the World Cycling Federation (WCF) – to be able to use his innovative bike ‘Old Faithful’, made from washing machine parts.

Like many great athletes, Obree also faces his own inner demons in the form of mental illness and depression, although this element is a little side-stepped in the film. Steven Berkoff is on hand in a comically over-the-top sinister turn as WCF chief Ernst Hagemann, and there’s memorable supporting work from Billy Boyd and Brian Cox. 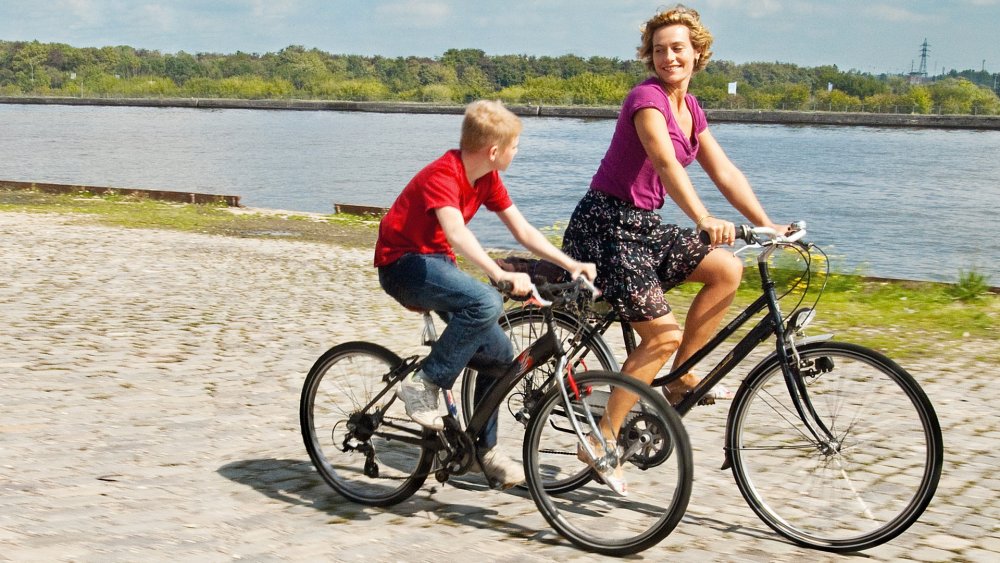 From the masters of stripped-back storytelling, this 2011 drama by the Dardenne brothers features a tearaway 11-year-old boy, Cyril (Thomas Doret), who’s been abandoned by his father (Jérémie Renier). Cyril escapes school to search for his bike, a symbol of his lost relationship with his father. A local hairdresser (Cécile de France) takes him in, but his destructive behaviour threatens to destroy this new stability. Co-winner (with Once upon a Time in Anatolia) of the Grand Prix at the 2011 Cannes Film Festival, this poignant drama revolves on themes of love, family and belonging, with echoes of Italian neorealist films and an obvious nod to Bicycle Thieves.