Nerd-chic programming comedy Computer Chess has inspired us to boot up 10 of the best computer films. 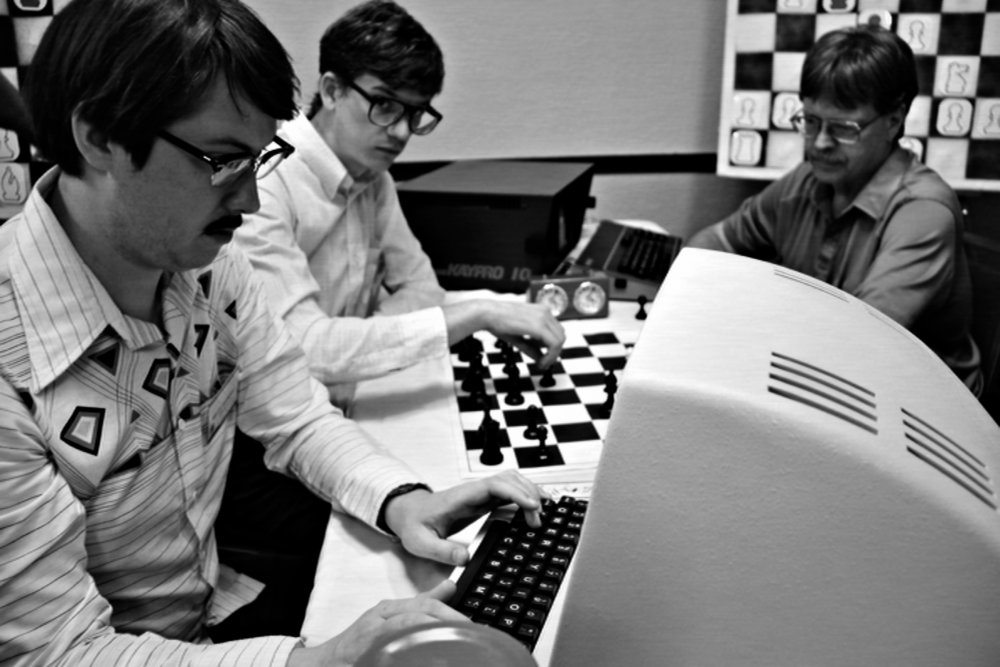 Set in the early 1980s, Computer Chess takes place at a weekend tournament where software engineers have converged to pit their chess-playing computer softwares against each other. Shot in black and white and on analogue video, it’s an affectionate, retro-chic ode to the idealism of a group of nerds whose apparently insular obsession was quietly laying the foundations for developments in artificial intelligence.

Highly original and beautifully observed, Andrew Bujalski’s film also presents a line in the sand in the history of films about computers. Instead of facing ahead and keeping up with the rapid evolution of technology, it looks back to the past, misty-eyed about a specific moment in our headlong rush into the future.

When computers first started appearing in films, they still seemed like the technology of tomorrow: bleeping, flashing supercomputers found onboard some intergalactic craft. After 2001: A Space Odyssey (1968), starring the most celebrated of all filmic supercomputers, no space epic or dystopian future-vision was complete without its own sentient mainframe.

In the 1980s, as home computing gave birth to the teenage nerd, a cycle of films including WarGames (1983) and Weird Science (1986) held a mirror up to the first generation of children who were growing up with computers in their bedrooms. Two parallel trends followed in the 1990s, the virtual reality movie and the hacking movie, before the internet and social media became so all-encompassing that almost every film today is a film about computers in some way.

The progress in computers has been rapid, leaving the cinema running to catch up. To celebrate the release of Computer Chess, we’ve gone back to the future to select 10 of the very best computer movies.

With sci-fi epics like This Island Earth (1955) and Forbidden Planet (1956), audiences grew increasingly accustomed to seeing and hearing about computers at the cinema during the 1950s – even if the machines depicted seemed impossibly futuristic. But, out in the real world, the LEO I (Lyons Electronic Office I) had become the first computer to be used for commercial business, and office workers were already having to face up to bold new technologies.

Their understandable anxiety about being replaced by machines isn’t a common theme in Hollywood films of the time, an oversight which makes 1957’s Desk Set unique. It’s a late entry in the Spencer Tracy-Katharine Hepburn cycle of battle-of-the-sexes comedies, starring Hepburn as the head of the library of the Federal Broadcasting Network. The office is bringing in an efficiency-boosting mega-computer called EMERAC (Electromagnetic Memory and Research Arithmetical Calculator), and invites its inventor (Tracy) to help ease the process of its installation. It’s a room-filling behemoth, with all the requisite bleeps and flashing lights, but only exacerbates the employees’ fears of redundancy when a computing error causes pink slips to be sent out to everyone in the company.

Set at Christmastime, this cheerfully antiquated farce came from the pen of Henry and Phoebe Ephron, whose daughter Nora would – a generation later – write and direct the quintessential rom-com about the email era: You’ve Got Mail (1998). 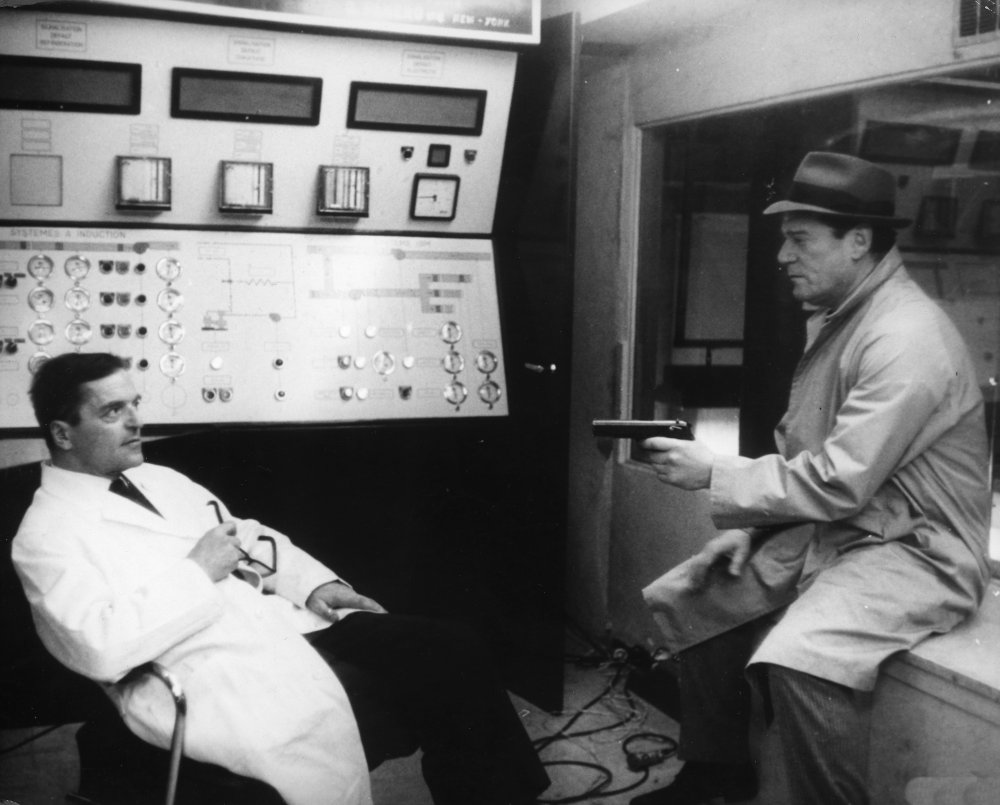 In its opening credits, Desk Set thanks the International Business Machines Corporation (IBM) for its assistance and cooperation. But the film’s whisper of anxiety about the rise of computers wasn’t going away. In the 1960s, this began to evolve into deeply pessimistic visions of man and his machines.

Enter Jean-Luc Godard, a cinematic groundbreaker on many levels, but also among the very first directors to treat the chilling potential of the computer. 1965’s Alphaville (working title: Tarzan Versus IBM) is set in a technocratic Paris of the future ruled by Alpha 60, a dictatorial supercomputer that has banned human emotion. Godard’s film was shot without special effects, instead he and his cinematographer Raoul Coutard made inventive use of the glass and steel of the contemporary city to suggest a world where the supposed advances of technology have created an emotional distance between people. 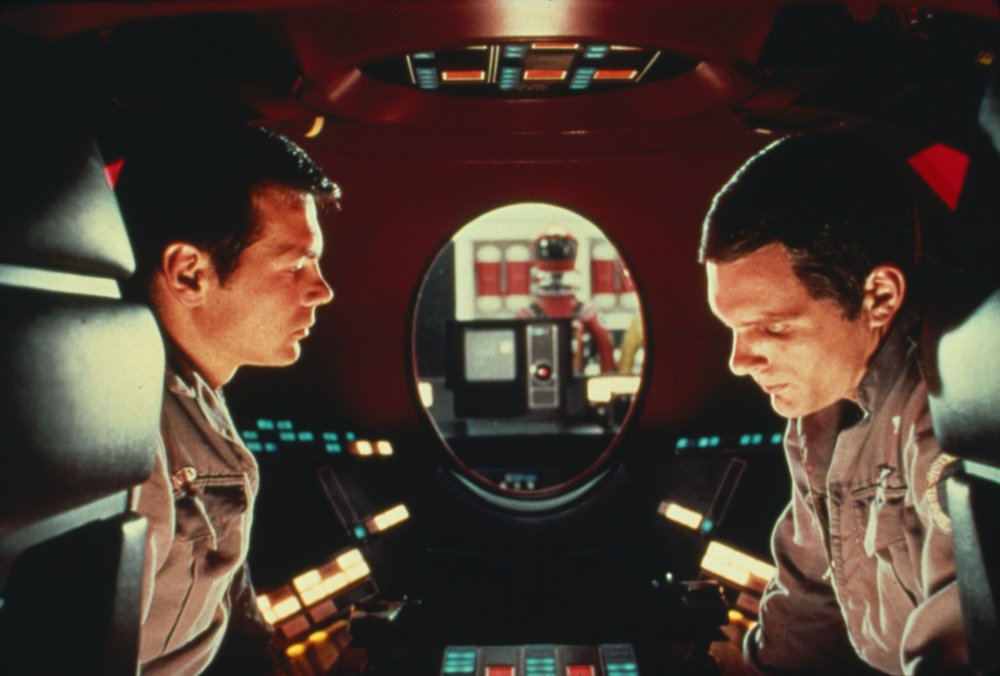 This was not the first space travel movie to feature a malfunctioning computer, but the HAL (Heuristically programmed ALgorithmic computer) 9000 that develops a murderous mind of its own during a mission to Jupiter remains film history’s most famous mainframe.

Stanley Kubrick was fascinated by computers and artificial intelligence, but did little for their reputation on-screen, having already brought about the end of the world with a computerised nuclear failsafe program in Dr. Strangelove (1963). But just as audiences once felt pangs of sadness for the monstrous King Kong as he toppled from the Empire State Building, HAL’s shutdown scene (with its gradually slowing rendition of ‘Daisy Bell’) is a moment of strange new pathos – that of sympathy for an inanimate object. With its mellifluous voice (provided by Douglas Rain), HAL has inspired countless imitations and spoofs, from MU-TH-R in Alien (1979) to I.N.T.E.L.L.I.G.E.N.C.E. in Team America: World Police (2004).

“Wouldn’t you prefer a nice game of chess?”, WOPR will ask David. No, David’s more interested in a program called Global Thermonuclear War, enthusiastically beginning to plan the destruction of first Las Vegas, then his hometown of Seattle – not realising his dabbling is having the gravest of real-world implications. A huge box-office success, WarGames led to a console game for Atari and Commodore 64 and remains a set text of early-80s retro-chic nostalgia.

No, not a great film (maybe even an outright bad one), but a great time capsule. Steve Barron was hot off directing music videos for Michael Jackson, The Human League and Tears for Fears, when he graduated to the big screen with this Virgin-bankrolled oddity about a love triangle between cellist Madeline (Virginia Madsen), dweeby architect Miles (Lenny Von Dohlen) and his jealous home computer, which has become sentient after a freak accident with spilled champagne.

Packed to the hilt with pop music, and weighed down with MTV-ready montage sequences, it’s a film that it’s difficult to imagine anyone taking too seriously even when it was first released, a headlong rush into a giddy future of soaring synths and techno wizardry that – two decades later – feels like a film from another planet. 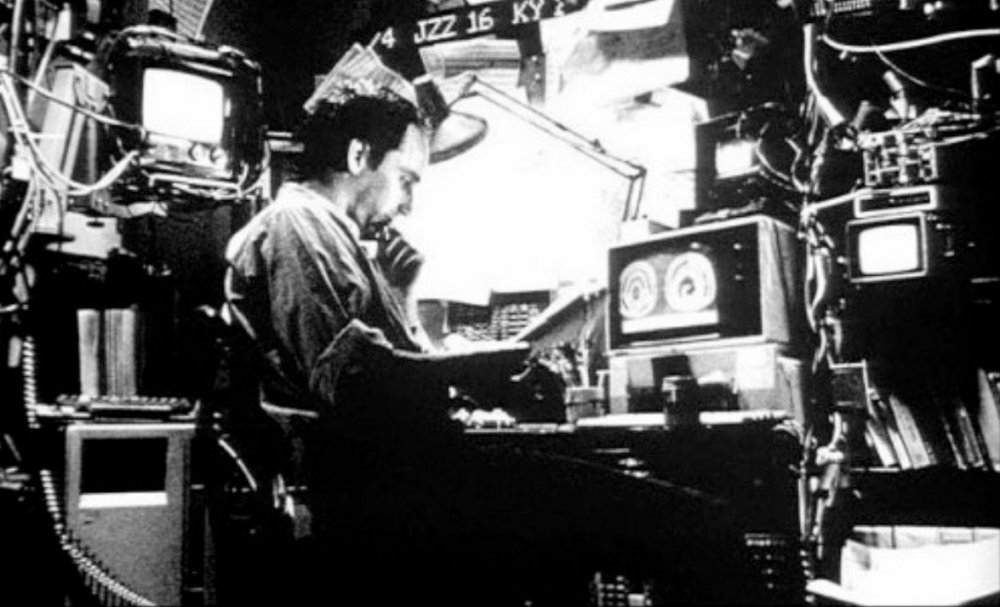 Darren Aronofsky’s number-crunching directorial debut is the story of Max Cohen (Sean Gullette), a paranoid, socially maladjusted mathematician who obsesses with his theory that numerical patterns underscore everything in nature. One day his computer Euclid (named after the Greek ‘father of geometry’) crashes after spitting out a 216-digit number that seems to predict movements on the stock market…

Scored with pulsing techno and shot in grainy monochrome, π puts us inside a disturbed mind that’s plagued by headaches, visions and the mental pressures of either genius or madness – we’re never sure which. There’s a surreal, nightmarish intensity to it all that recalls David Lynch’s Eraserhead (1977), but it’s combined with a quintessentially pre-millennial angst about numerological apocalypse. Made for $60,000, it remains one of the most distinctive, if harrowing, American debuts of the 1990s. 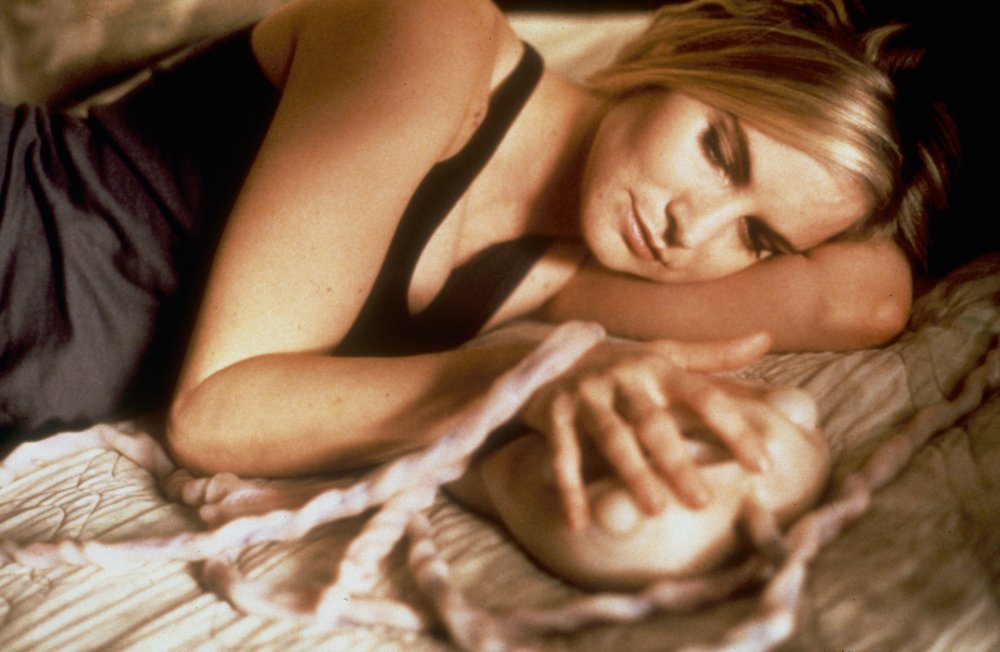 Rainer Werner Fassbinder had paved the way with his 1973 TV series World on a Wire, with Disney following suit in 1982 with Tron. But it wasn’t until the 1990s that virtual reality really took hold as a subject in the movies, with a cycle of not always terribly good films that includes The Lawnmower Man (1992), Johnny Mnemonic (1995), Strange Days (1995) and The Matrix (1999).

David Cronenberg stepped into the breach at the end of the decade with a wildly entertaining glimpse into a near future where the popularity of virtual reality computer games bestows god-like celebrity on their creators. Forced to go on the run together after an attack by pro-reality activists, game designer Allegra Geller (Jennifer Jason Leigh) persuades security guard Ted (Jude Law) to join her inside her game, initiating a bewildering succession of events in which it becomes all but impossible to tell reality from play. 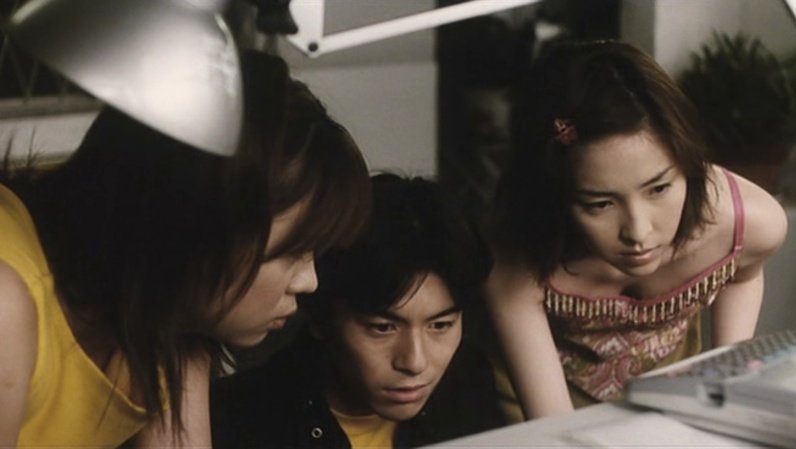 Hideo Nakata’s Ring (1998) had already made the humble videotape a thing of terror when in 2001 another landmark of the new cycle of Japanese horror cinema, Kiyoshi Kurosawa’s Pulse, gave us reason to fear our computers too. From its arrival, the internet always seemed like an exciting portal into new worlds; Kurosawa turned this on its head and made it a portal into the afterlife, through which the dead return to invade the world of the living.

In two parallel stories, young Tokyo-ites begin to see terrifying images through their computer monitors, ghostly black stains appear on walls in dingy apartments, and doors sealed with red tape mysteriously crop up around the city. While delivering more than its share of jolts and creepiness, Pulse is also suffused with melancholy and a sense of loneliness. “People don’t really connect you know,” says one character of the internet, as Kurosawa’s film mournfully maps the apartness of people in a world of advancing technology. 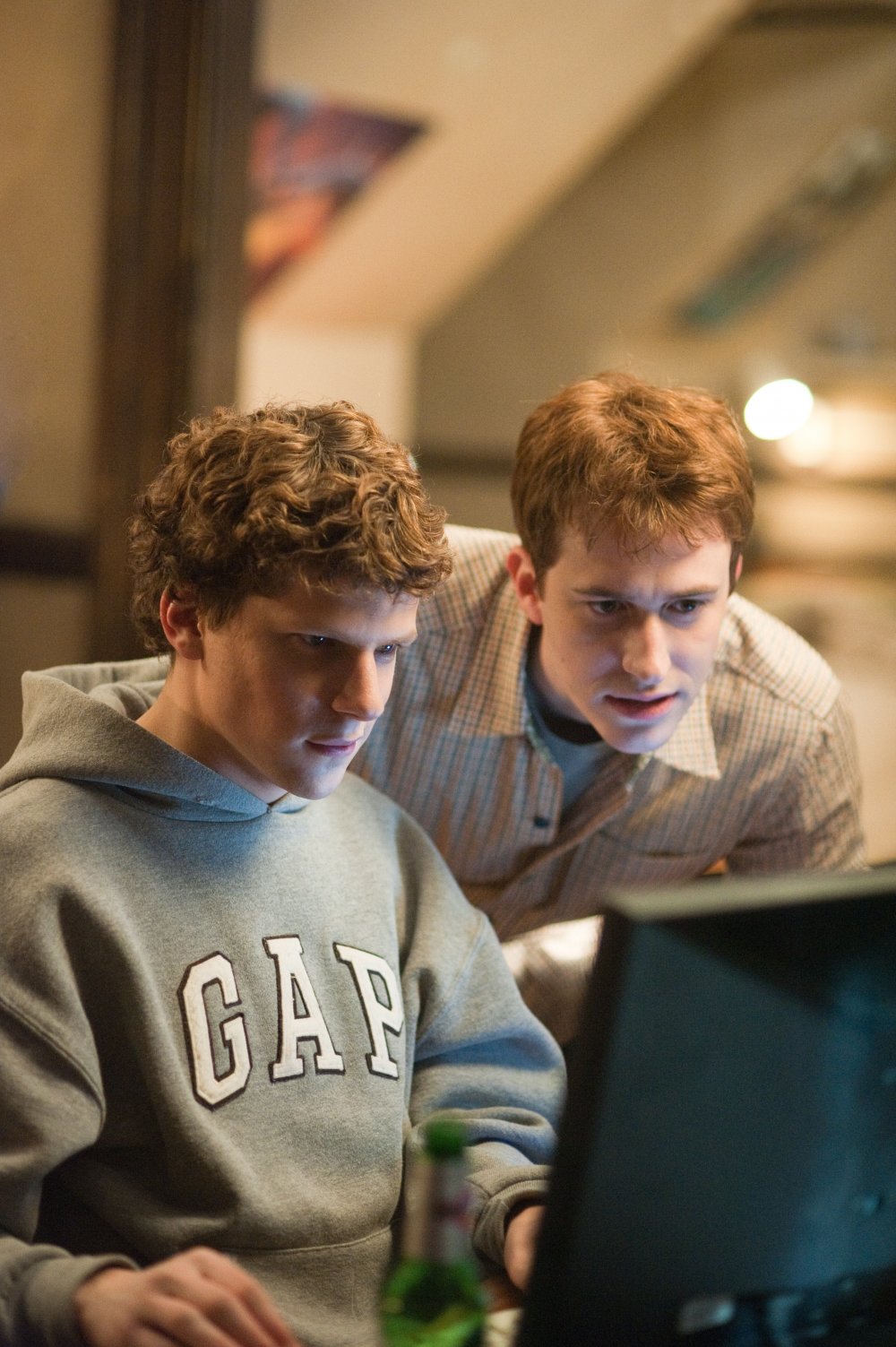 Depending on your viewpoint, the atomisation of people via computers suggested in Pulse began to take a turn for the better or the worse in the years immediately after the film’s release. With the advent of Facebook and other social media sites, friendships increasingly began to be sealed, counted, conducted and made visible online. When David Fincher made The Social Network in 2010, about the founding of Facebook by Harvard tech nerd Mark Zuckerberg (Jesse Eisenberg), there was a sense that almost everybody was interested in seeing it. After all, who didn’t – by then – use, love or hate Facebook? Who wouldn’t be interested in the fractious drama of its creation?

Fincher had an enviable subject and, with the aid of dialogue by Aaron Sorkin that perfectly captures the rapid-fire patter of nerdspeak, created a rather damning portrait of Zuckerberg and his associates but a thrilling drama about – if we’re to be grand about it – the seeds of a new age. 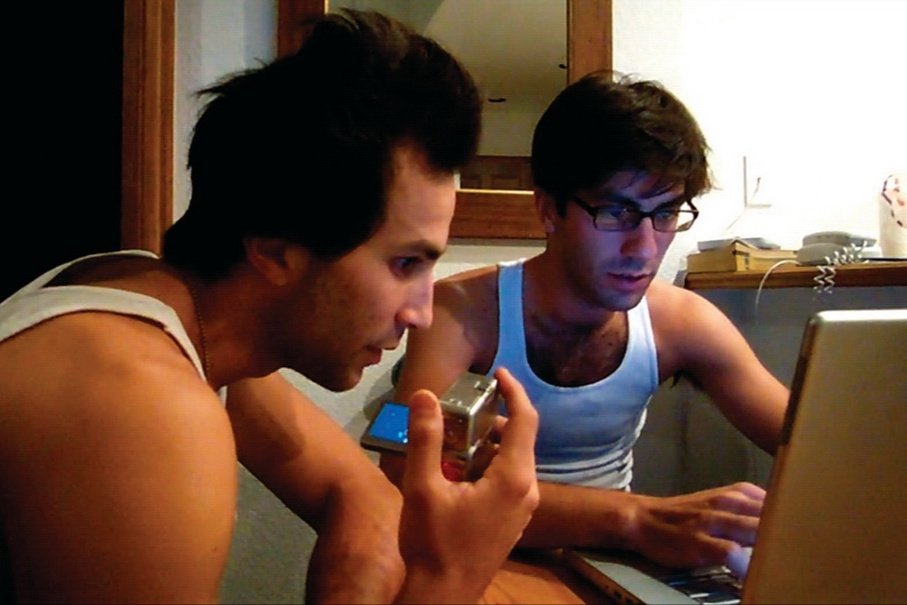 The same year that David Fincher told the origins story of Facebook, a documentary emerged with a belief-defying parable about the potential perils of social networking.

Catfish follows a man called Nev Schulman, a photographer in New York (and the brother of co-director Ariel Schulman) who is mailed a painting of one of his photos by an eight-year-old art prodigy, Abby, living in Michigan. What begins as an exchange on Facebook blossoms into an internet friendship with Abby’s whole family – and a long-distance romance with Abby’s beautiful elder sister Megan. As contradictory truths emerge, the unravelling story proves such a gift for documentary filmmakers that many have cried hoax. Why were there cameras there to record the story from the beginning? Where was Skype in all this? But however much of Catfish is truthful or falsified, it beat fiction cinema to a profound new subject: the ways we construct our identity online.