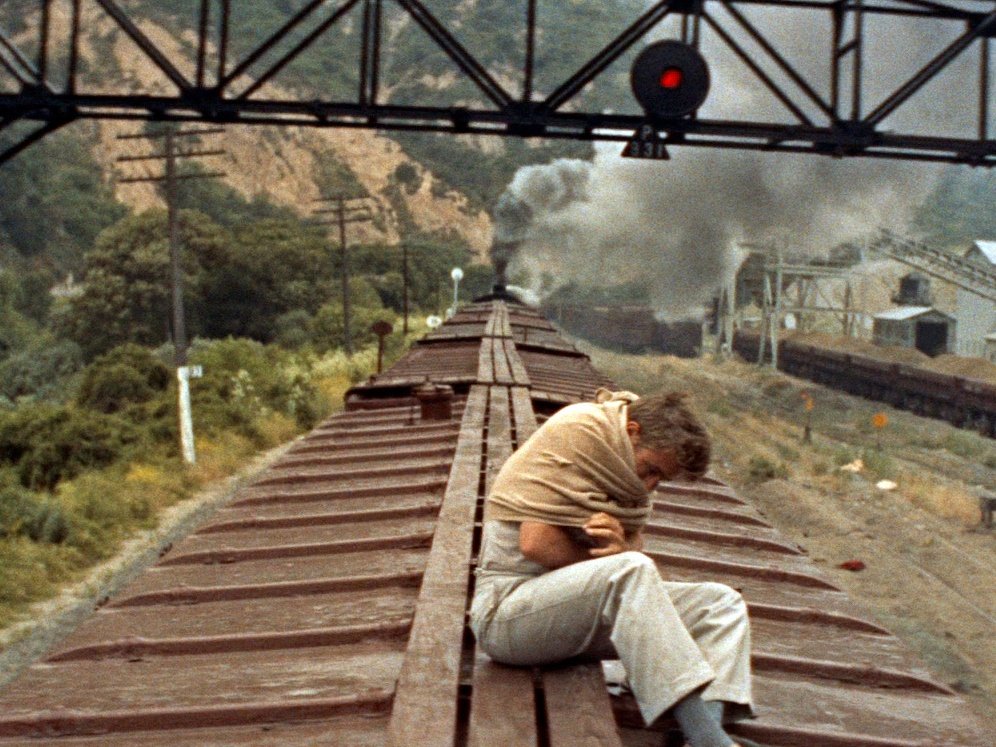 The iconic James Dean was only able to star in three feature films before his untimely death at the age of 24 in 1955. His debut role, for which he received the first official posthumous best actor nomination in Academy Awards history, came in Elia Kazan’s classic East of Eden (1955), a gripping tale of sibling rivalry. It was the only one of Dean’s films that the actor was able to see in its entirety. 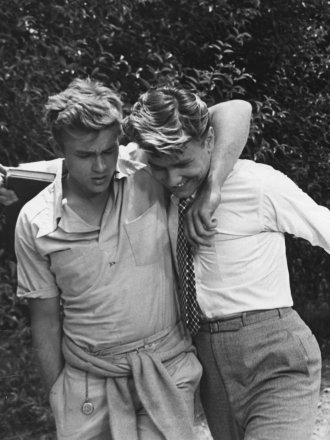 Based on the 1952 novel of the same name by John Steinbeck, this drama, set in California on the eve of America’s entry into the First World War, is a bracing update of the Old Testament’s Cain and Abel story. Dean stars as Cal Trask, the moody, wayward son of taciturn farmer Adam (Raymond Massey). Cal generally means well, but is magnetically attracted to trouble, and can’t hope to match the high esteem in which his father holds his conscientious, ‘good’ brother Aron (the underrated Richard Davalos). After Adam’s naive plans for a long-haul vegetable shipping business venture end in a huge financial loss, Cal bravely enters the bean-growing business as a way of simultaneously recouping the lost money and proving himself to his father. Unsurprisingly, events do not run smoothly, and Cal’s actions prefigure a great deal of family conflict.

Newly restored and released by Park Circus [in 2014] alongside Dean’s other films Rebel without a Cause (1955) and Giant (1956), East of Eden screens at BFI Southbank from 18 April 2014. To mark its reappearance, here is a selection of 10 more of the greatest films about brotherly relationships. Expect fraternal tension, bitterness, jealousy, murder, rage and – occasionally, at least – love. 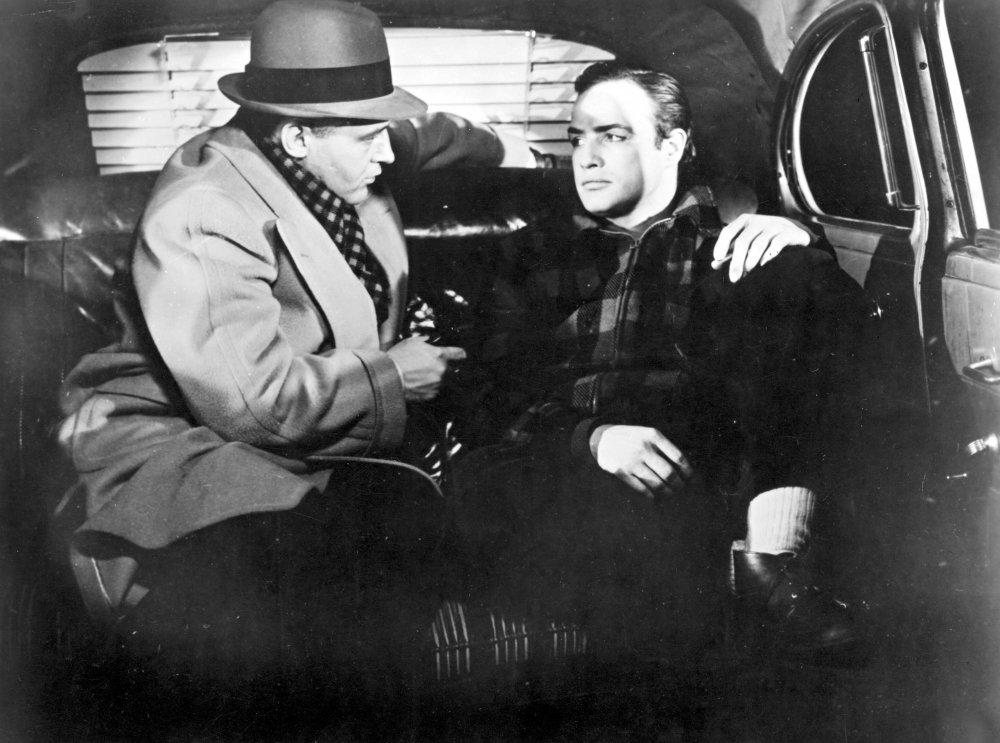 East of Eden was Elia Kazan’s second film on the spin to focus on a disastrously strained brotherly relationship. Its predecessor, On the Waterfront, is a pungent morality drama about union violence and corruption among longshoremen, set on New York’s oppressive docks. At its centre is the fraught connection between Terry Malloy (Marlon Brando) and his brother Charley (Rod Steiger), the right-hand man to the ironically-named Friendly, a crooked union boss. Years hence, Friendly had Charley order Terry to deliberately throw a fight that he could have won, so that the union boss could scoop the betting money: unsurprisingly, this history lingers like a bad smell.

A wholly engrossing spectacle distinguished by earthy performances, Kazan’s film is rightly famed for the powerful scene in which a heartbroken Terry tells Charley that, had it not been for the rigged fight, his career could have bloomed. “I coulda been a contender,” he laments, “instead of a bum, which is what I am. Let’s face it, Charley.” Following this emotional exchange, tragedy is to be found just around the corner. 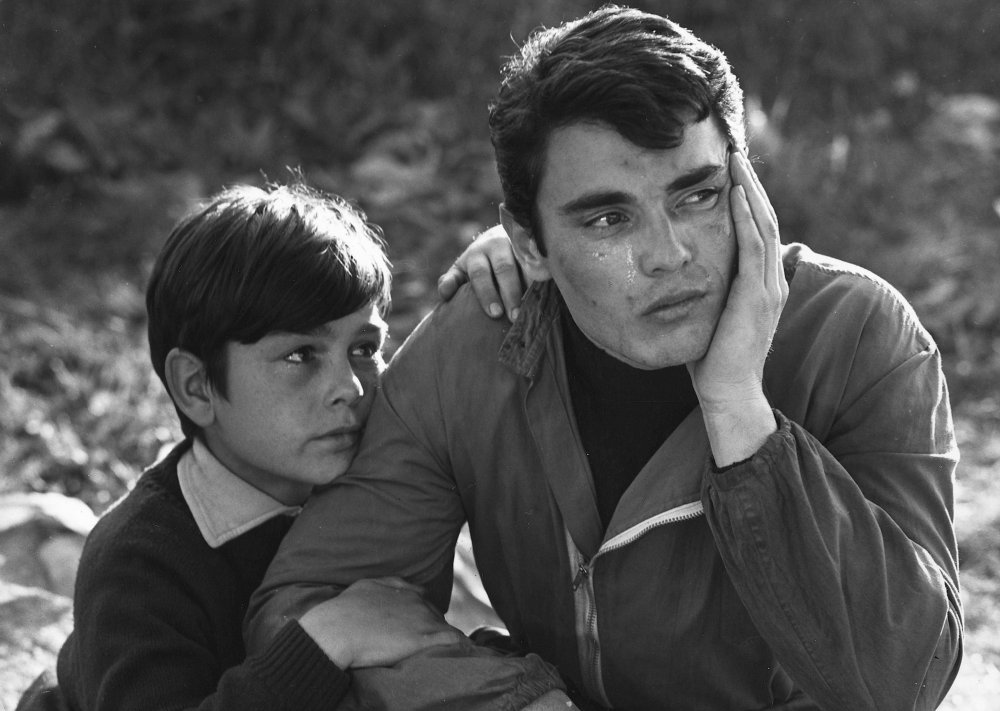 Although Luchino Visconti’s epic, operatic family saga ostensibly tracks the fortunes of five scrappy siblings, its core dramatic thrust is provided by the bubbling tension between Rocco (Alain Delon) and the rugged Simone (Renato Salvatori). Though diametrically opposed in many respects (Rocco yearns for his rural origins, while Simone is drawn to city life in northern Italy), they’re both handy in the boxing ring, and both happen to fall for the same woman: a prostitute, Nadia (Annie Girardot).

The film’s pivotal, and most shocking, scene arrives when Simone, along with a group of cronies, interrupts Rocco and Nadia during an outdoor tryst. In a repulsive act designed to debase the woman, intimidate his brother, and assert his own masculinity, he attacks and rapes Nadia. This scene, and a murder later in the film, provoked the wrath of the Italian censors: the film was seized and Visconti pressured to delete the offending moments. Visconti was only vindicated when a court judgement came down in his favour in 1966. 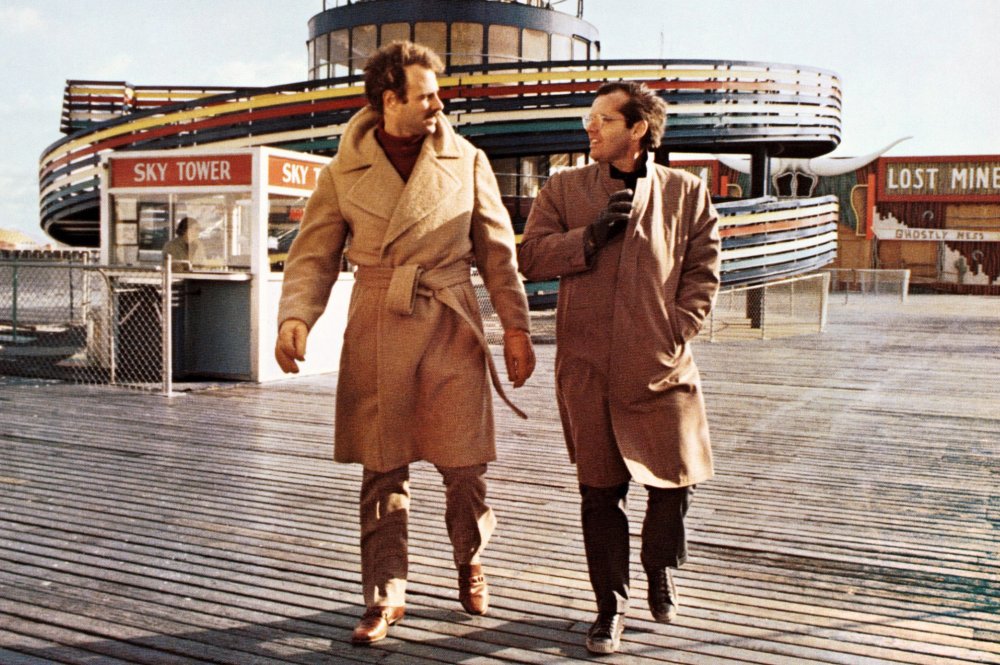 Bob Rafelson’s follow-up to Five Easy Pieces (1970) is a muted drama shot through with a shabby, faded glamour. Evocatively filmed in misty greys and blues by Vilmos Zsigmond, it plays as an elegy for the impossibility of the American Dream as refracted through the testy bond between a pair of chalk and cheese brothers. David (Jack Nicholson, in impressively buttoned-down form) is a depressive Philadelphia DJ summoned to the eerily dilapidated Jersey Shore by bro Jason (an on-the-precipice Bruce Dern), a toothy huckster with wildly ambitious plans to launch a casino in Hawaii. What David doesn’t know is that Jason is in deep trouble with the ruthless local boardwalk mobsters.

In perhaps the film’s most tellingly symbolic scene, the brothers discuss their future plans while literally going around in circles inside the Sky Tower ride on the shore. This downbeat character study was a colossal critical and box-office flop upon its original release, but has seen its reputation restored in recent times; it was rereleased in the UK in 2013. 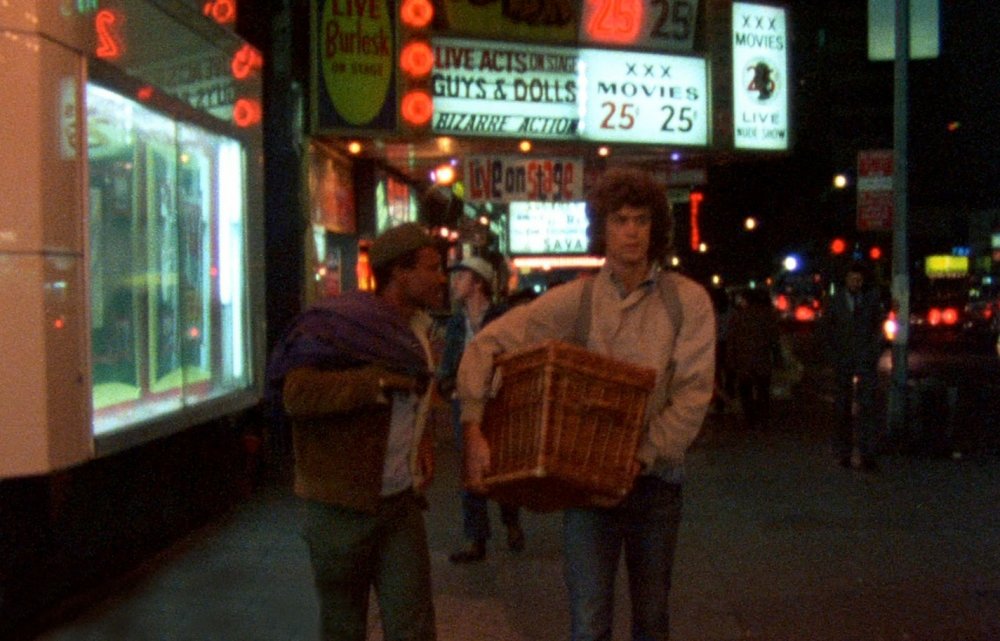 Frank Henenlotter’s deeply scuzzy yet vastly entertaining low-budget horror has one of the most deliciously literal titles of all time. It stars Kevin Van Hentenryck as Duane, a fresh-faced, curly-haired nerd who arrives on the grimy streets of early 80s New York with a locked basket under his arm. Inside the basket resides Belial, his embittered, grotesquely deformed Siamese twin: the result of a surgical separation in their youth. Together, the pair embark on a bloody quest for revenge against all who’ve wronged them, beginning with those poor doctors…

“This is the sickest movie ever made!”, screamed the famously crotchety critic Rex Reed… but the film’s distributor didn’t mind, and promptly slapped the quote all over its promotional campaign. Basket Case spawned two further sequels. Both are entertaining enough on their own terms, but neither are able to capture the original’s perfect storm of poignancy and sheer terror. 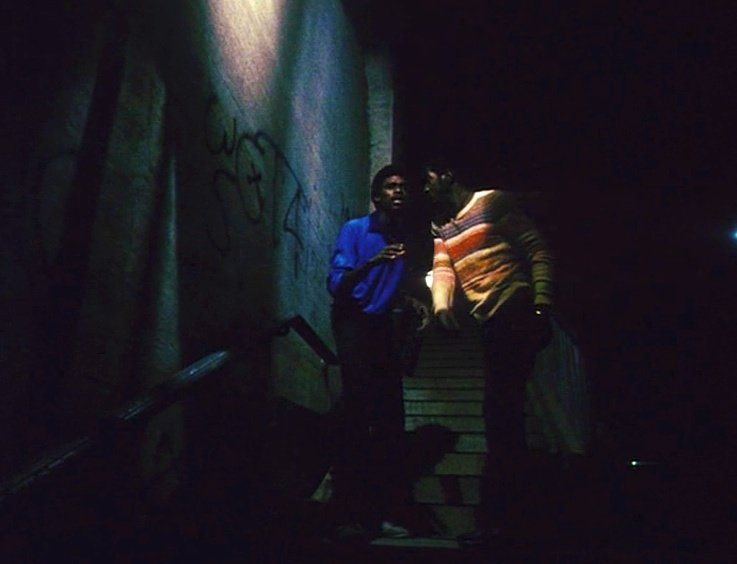 Charles Burnett remains best known for his elegiac, neorealism-inspired debut Killer of Sheep (1977), but his long-gestating follow-up is also well worth investigating. A wry, touching and keenly-observed portrait of life in South Central, LA, My Brother’s Wedding stars Everett Silas as Pierce, a languid, resolutely unambitious young man who settles for working in his parents’ dry-cleaning business. Conflict soon rears its head as Pierce finds himself split between his duties to his upwardly-mobile brother Wendell (Monte Easter) – who is due to marry a doctor’s snobbish daughter (Gaye Shannon-Burnett) – and his ill-advised loyalty to wayward, jailbird best friend, Soldier (Ronnie Bell).

Unfortunately, Burnett was prevented from completing his final edit on the film before it was sent to the New York Film Festival for screening by the producers. It took almost a quarter of a century before the director-approved version of the film was finally released in 2007. 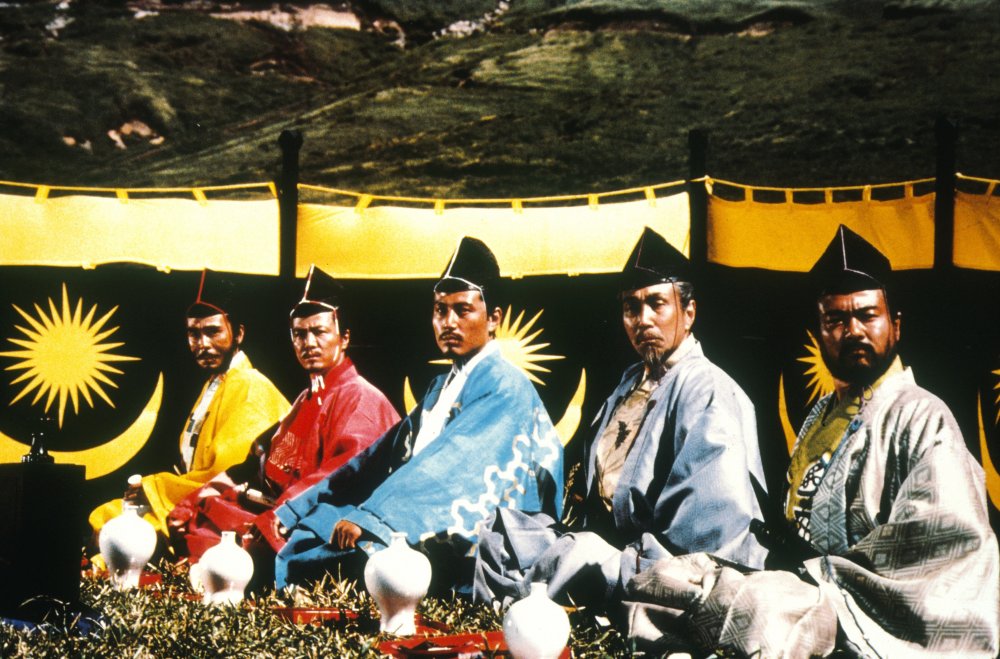 The most expensive film made in Japan at the time of its release, Akira Kurosawa’s final large-scale epic vigorously blended elements of Shakespeare’s King Lear (switching sons for daughters) with the legend of daimyo Mori Motonari.

An ageing warlord, Great Lord Hidetora Ichimonji (Tatsuya Nakadai), splits his fiefdom into three, apportioning equal shares to his sons: Taro (Akira Terao), Jiro (Jinpachi Nezu) and Saburo (Daisuke Ryu), who are to get the first, second and third family castles. The spirited Sabura, however, accurately foresees trouble, and, unlike his brothers, refuses to blindly kowtow to his father. Violence ensues, chaos reigns, and what follows is never anything less than an astonishing visual spectacle. The film is notable for its ingenious use of colour to inform character and the spatial landscape: rather than keeping track of the sons’ names in the midst of complex, mass battles, the viewer can follow the son dressed in yellow, the son dressed in red and the son dressed in blue – their armies are marked out accordingly with colour-coded flags.

The funeral of the title is Johnny’s, and it is at this emotional juncture where the film begins. Ferrara and writer Nicholas St John employ a chronologically elastic structure which eventually unravels the knotty events leading up to the opening scene’s grim tableau. Full of unpredictable twists and turns, The Funeral grips like a vice until its shockingly nihilistic denouement. Abel Ferrara’s oeuvre is littered with underrated films, but this might just be the most overlooked of all: the shifting, complex relationships between the brothers (and their wives and girlfriends) lends the film a powerful emotional undertow. 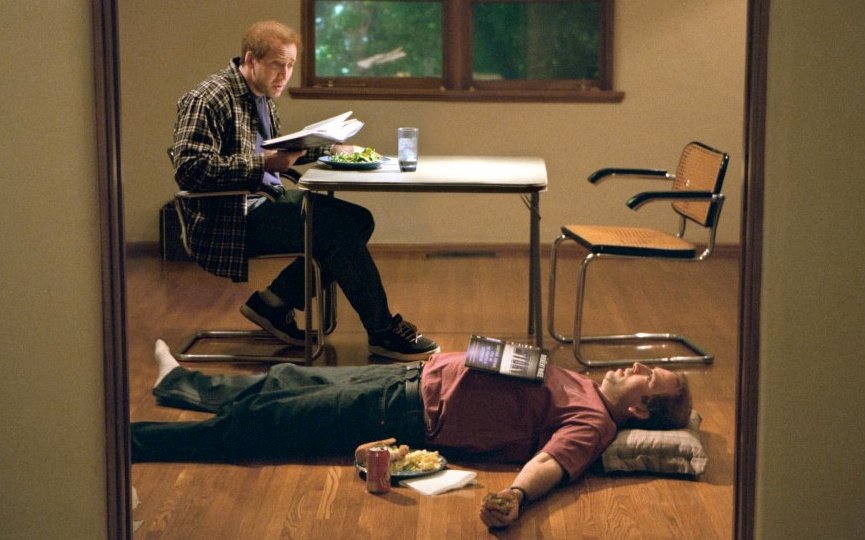 Nicolas Cage gives both of his best performances to date in Spike Jonze’s dazzling film of Charlie Kaufman’s semi-autobiographical, characteristically tricksy script. Cage plays twin brothers Charlie and Donald Kaufman – the former is an antisocial, doubt-riddled writer slowly losing his mind over an adaptation of Susan Orlean’s book The Orchid Thief, while the latter is an ebullient, opportunistic hack who lands a megabucks deal to develop his script for a clichéd psychological thriller. This development is, of course, much to Charlie’s chagrin.

Adaptation has a host of serious and archly articulated points to make about the vagaries of creativity and the vexing intersection of art and commerce. However, it’s most memorable for its poignant, unsentimental portrayal of brotherly antipathy and (deep, deep down) love. The gripping scenes between Charlie and Donald are as much a testament to the trick photography and Cage’s uncannily versatile performance as they are to Kaufman’s brutally honest, observant writing. 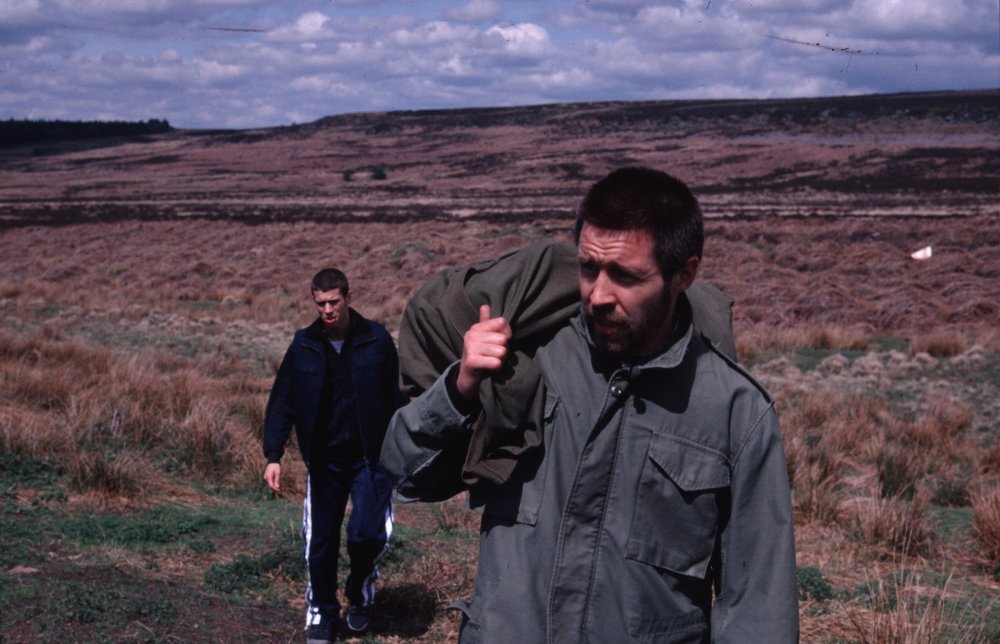 Few who saw Shane Meadows’ knockabout cod-western-cum-romcom Once upon a Time in the Midlands (2002) could have predicted the corrosive darkness that would define his follow-up, Dead Man’s Shoes. Paddy Considine gives a career-best performance as Richard, a troubled army vet who returns to a drab Derbyshire village to exact methodical revenge on the shabby lowlifes who’ve been tormenting his mentally-impaired brother Anthony (a hauntingly vulnerable Toby Kebbell.)

Despite the watch-through-the-fingers brutality exhibited by Richard on his singular quest, the fierce loyalty he displays toward his brother is oddly touching. That is, until an unforgettably vicious final twist transforms Dead Man’s Shoes from a skilfully nasty revenge thriller into a bitter, curdled study of regret. 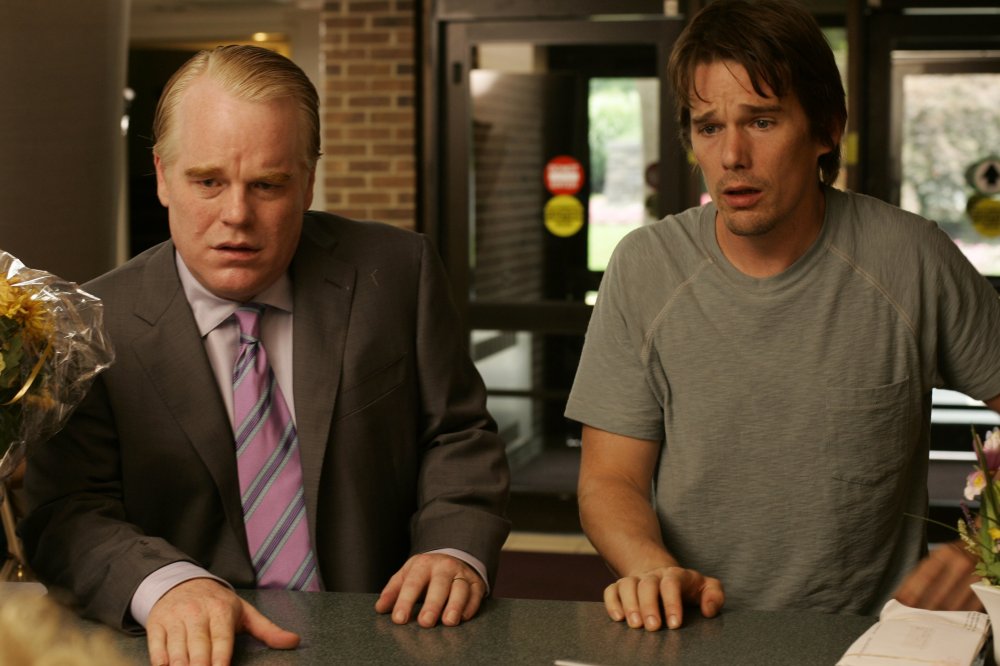 At the heart of this ferocious heist thriller lies the imbalanced relationship between brothers Andy and Hank Hanson (Philip Seymour Hoffman and Ethan Hawke). In order to fund an escape to Brazil, corrupt finance exec Andy hatches a hairbrained scheme to rob the jewellery store owned by the boys’ father (Albert Finney). Even though he knows the plot is doomed to failure, the deadbeat Hank allows himself to be dominated by his venal, heroin-addicted older brother. It doesn’t take long before events spiral far beyond the control of either man.

Before the Devil Knows You’re Dead is already poignant given its status as the veteran director Lumet’s final film, but it has assumed a further, powerful extratextual charge in the light of the tragic recent death of Hoffman. 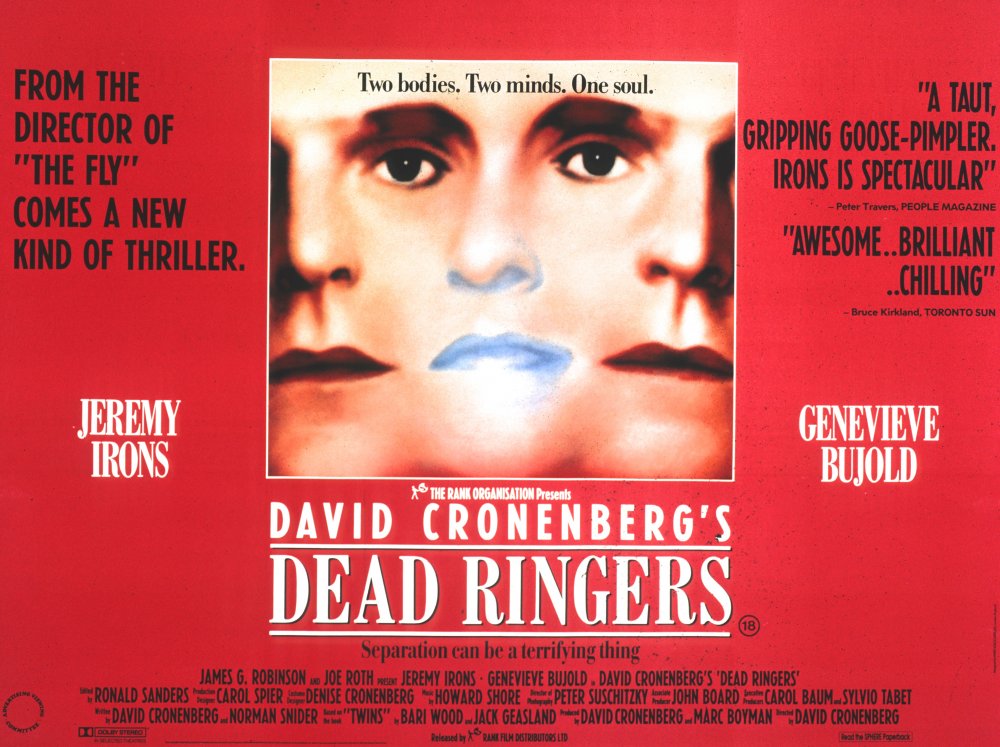 1988 would seem to be the annus mirabilis of the brother film. Sure, we put David Cronenberg’s Dead Ringers on our recent list of films about doubles, but you overwhelmingly voted Jeremy Irons’ turn as good/bad twins as deserving inclusion in our brothers list too. The same year’s Oscar winner Rain Man, with Tom Cruise playing a self-involved hotshot who’s thrown together with his autistic brother (Dustin Hoffman) on a road trip, was also a very popular suggestion.