Once upon a time, a French poet created a sublime film version of Beauty and the Beast that would enchant audiences forever after. With Jean Cocteau’s masterpiece now on BFI Player, here are 10 more truly magical fairytale movies. 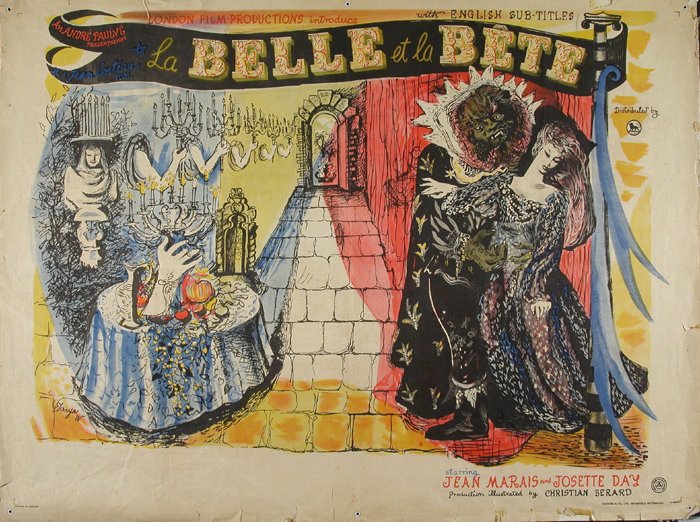 Because the cinema has always sought to offer an escape route from the pressures of the modern world, it comes as little surprise that fairytales offered huge appeal to filmmakers almost from the medium’s very dawn. Queen Victoria was still alive when Georges Méliès adapted Cinderella (1899) and other staples, and the pre-First World War period saw numerous fantastical tales emerge from both sides of the Channel and the Atlantic – the ones produced by Pathé Frères being particularly notable for their intricate hand-stencilled colours.

So by the time Jean Cocteau put his own characteristic spin on Beauty and the Beast, with La Belle et la Bête in 1946, the genre was already half a century old, and has shown no sign of flagging. On the contrary, fairytales both traditional and original offer seemingly limitless creative potential – Mme Le Prince de Beaumont’s tale of Beauty and the Beast has itself been reflected through numerous prisms, including Disney animation (1991), a present-day thriller (the 1987 TV series), an American high school (Beastly, 2011), out-and-out horror (Spike, 2008) and Walerian Borowczyk’s outrageous The Beast (1975), in which the Beast’s lust for his Beauty leaves nothing to the imagination.

As that last example emphasises, these films aren’t necessarily aimed at children, although the greatest examples strike chords across generations. They can be played absolutely straight or turned into complex personal and political allegories. They can draw on the latest in film technology or, as Cocteau did so memorably, rely heavily on the audience’s collective imagination. 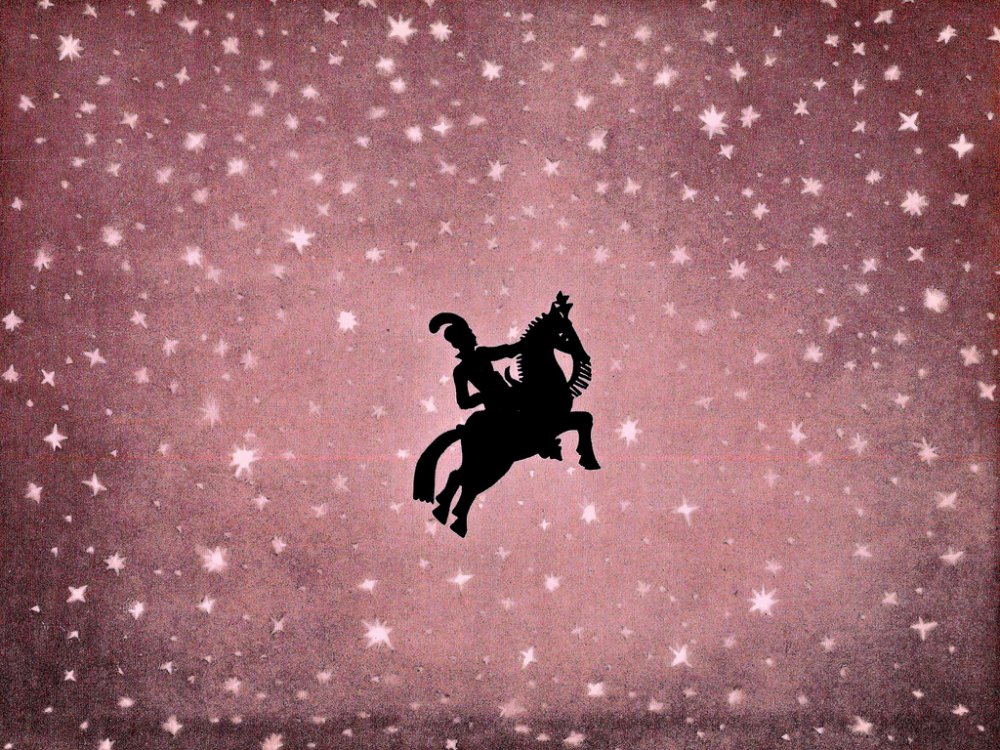 As much for commercial reasons as anything else, pioneering animators often turned to folk and fairytales for inspiration. Aleksander Ptushko’s The New Gulliver (1935) redrafted Jonathan Swift as pro-communist propaganda, Władysław Starewicz’s The Tale of the Fox (1937/41) saw the wily Reynard run rings around hapless colleagues, while Ray Harryhausen honed his technique on Mother Goose Stories (1946) and other short fairytale adaptations (1949-53).

German silhouette animator Lotte Reiniger’s commitment to the genre spanned her entire career.  Drawing on the ancient history of shadow-plays, her films are populated by painstakingly detailed cut-out creations, especially in this ambitious adaptation of the Arabian Nights that is believed to be the oldest surviving animated feature film. She never made another, but her later short films include exquisite adaptations of familiar classics and oddities like The Tocher (1938), inspired by the Scottish legend of the ‘wee folk’. 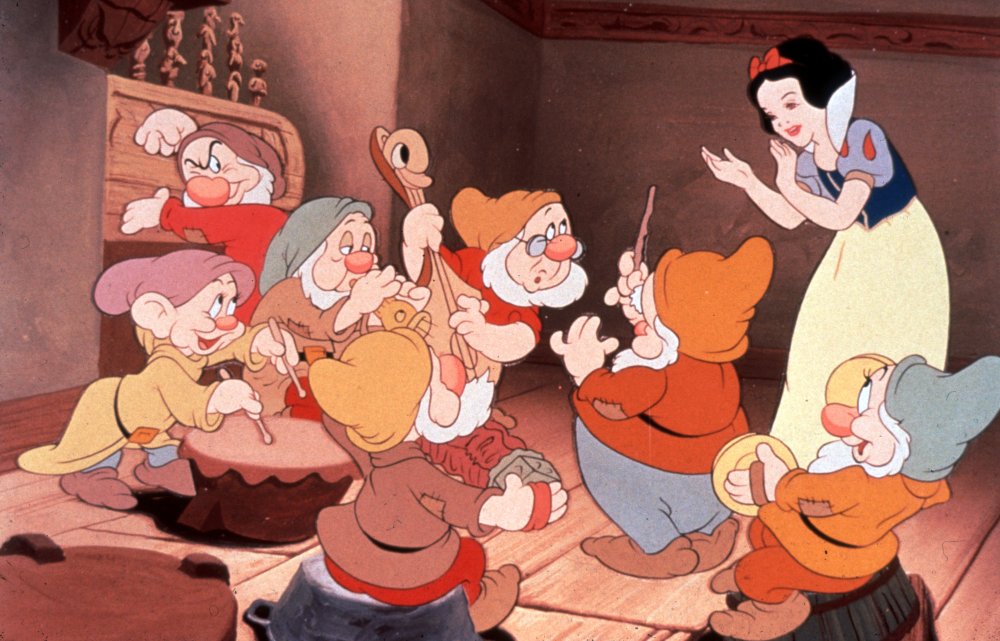 For the past 75 years, untold millions (more likely billions) of children received their first exposure to traditional fairytales through the work of Walt Disney. His formula: take a timeless story, flesh it out to feature length with the aid of irrepressibly catchy songs (Snow White boasts ‘Heigh Ho’, ‘Some Day My Prince Will Come’ and ‘Whistle while You Work’) while making sure that little or nothing dates the material – Snow White and the Seven Dwarfs may be the oldest film that could still get a profitable multiplex reissue today.

Given that Disney’s name is often (unfairly) used as shorthand for saccharine Americanised blandness, it’s surprising on revisiting early Disney features (notably the frankly traumatising Bambi, 1942) to see how dark they are, how unafraid to confront disturbing home truths. The Queen, Snow White’s stepmother, is a genuinely demonic creation, and the film faithfully reproduces the Brothers Grimm’s original themes of apparent death and premature burial. 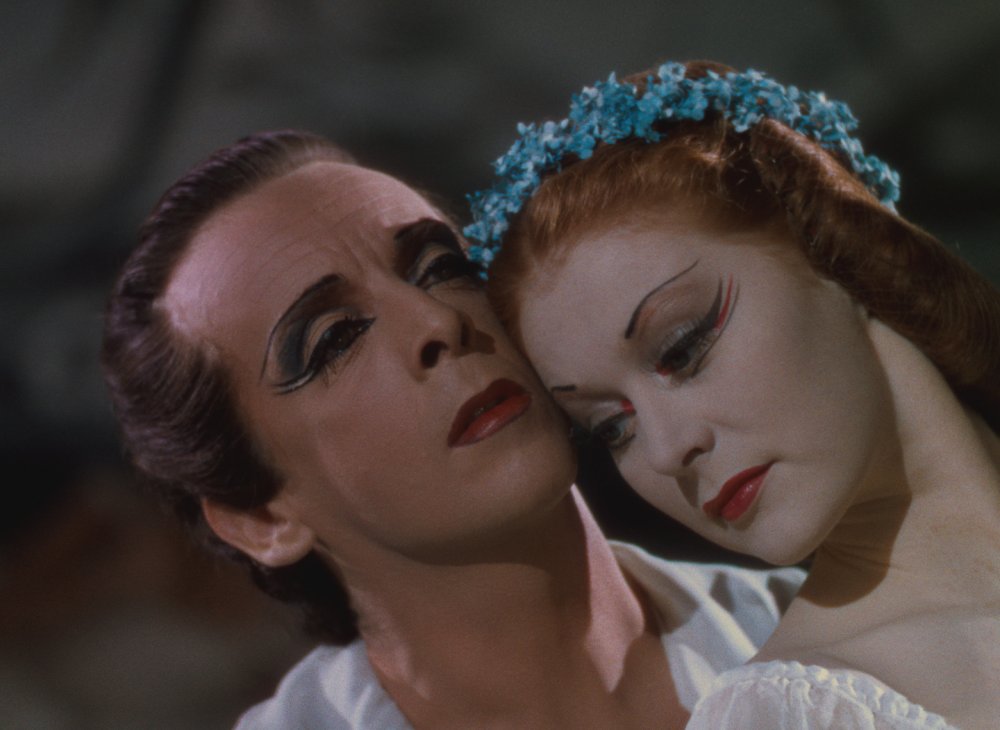 The high-water mark of the extraordinary creative run that Michael Powell and Emeric Pressburger enjoyed in the 1940s, this extravagant fusion of fairytale (Hans Christian Andersen), ballet and melodramatic romance was damned by its British distributors as “an art movie”, but went on to become an Oscar-winning blockbuster in the US.

Powell’s masterstroke was to cast an actual star ballerina, Moira Shearer, in the lead, her flaming tresses a natural for Technicolor. She proved more than up to the challenge of acting opposite Anton Walbrook and Marius Goring as the two men whom she rejects in favour of a total devotion to her art. During both the legendary ballet sequence (a 17-minute cinematic tour de force impossible to realise on a stage) and the grisly climax, The Red Shoes even nudges the horror genre, something later exploited by Dario Argento’s Suspiria (1977) and Darren Aronofsky’s Black Swan (2011).

The Czechs have a longstanding affinity with the fairytale, their many film classics spanning perennial childhood favourites like Bořivoj Zeman’s Once There Was a King (1954) and Václav Vorlíček’s Three Wishes for Cinderella (1973), or the dark fantasies of Jan Švankmajer’s Alice (1988) and Little Otík (2000). Jaromil Jireš’s gothic extravaganza straddles both these worlds, and is decidedly not for children!

Valerie (Jaroslava Schallerová) is a 13-year-old on the cusp of womanhood, a life change marked by the emergence of strange and often threatening figures – the priest just as disturbing as the vampiric ‘Weasel’ (whose white make-up was inspired by the 1922 film Nosferatu). Writer Angela Carter was among the film’s fans, and Valerie’s influence can clearly be seen on the Carter-scripted The Company of Wolves (1984), which fused a similar premise with more recognisable fairytale elements (notably Little Red Riding Hood). 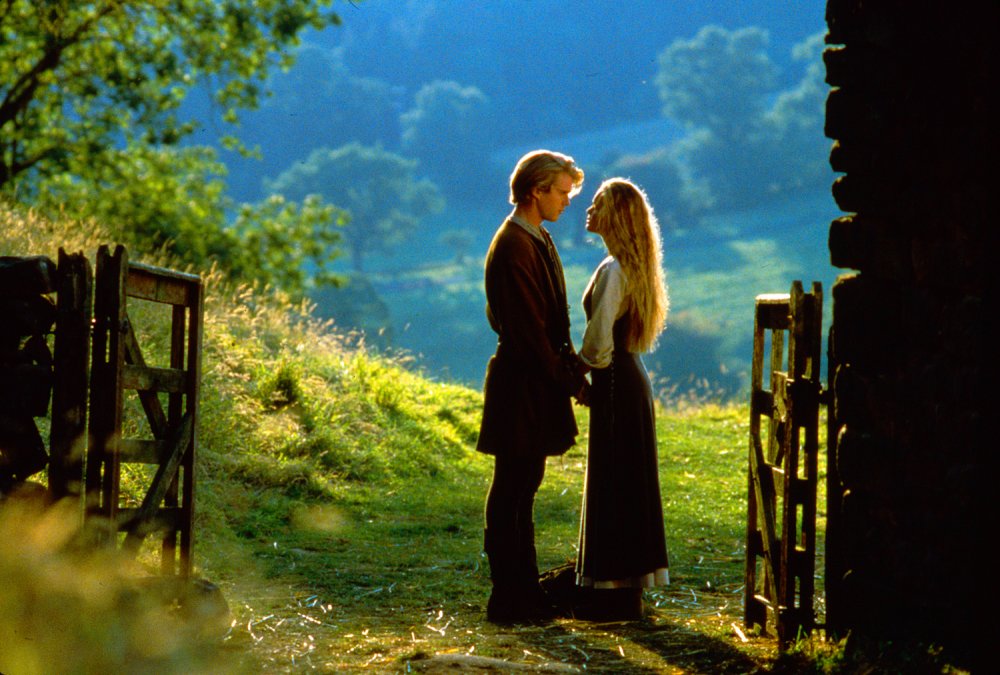 Targeted at more cynical children who’ve convinced themselves that they’ve outgrown all that soppy fairytale nonsense, Rob Reiner’s adaptation of William Goldman’s sassy, knowing 1973 novel is one of the most instantly quotable films of its decade (“Inconceivable!”), and a cast that includes Billy Crystal, Mel Smith, Peter Cook and Christopher Guest (Reiner’s partner in hilarity on This Is Spinal Tap, 1984) makes it clear that much of it is played for laughs.

But it wouldn’t work half as well if it didn’t so obviously love what it’s satirising. The romance between Buttercup (Robin Wright) and Westley (Cary Elwes) is far more than an off-putting collection of ‘kissing parts’, the revenge-fuelled quest by Inigo Montoya (Mandy Patinkin) is a stirring tale of derring-do, there are giants and pirates and Rodents of Unusual Size, and it’s all narrated on-screen by a twinkly but firmly no-nonsense Peter Falk. 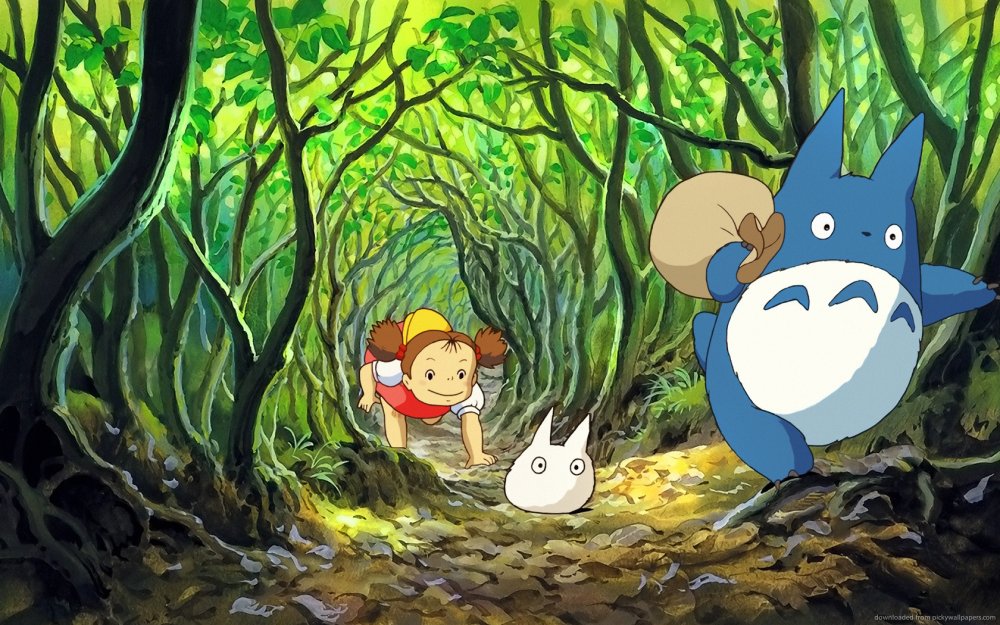 When we think of great fairytale films, they’re usually adaptations of already well-established classics. Hayao Miyazaki’s irresistibly beguiling masterpiece certainly feels like one, but in fact it’s a wholly original creation – albeit one that’s since become as indelible a part of Japanese (and global) culture as many things that have been around for centuries.

Two young girls, Satsuki and Mei, move into an old house near the hospital where their mother is recovering from a serious illness. There, they build an unlikely but touching rapport with the various supernatural creatures that inhabit the house and its surroundings, especially the monster-sized Totoro. This benign forest sprite travels by an unforgettable bus-shaped cat when he’s not guarding the forest and facilitating the growth of spectacular new trees (in which respect he’s far more successful than Dr Seuss’s similarly protective Lorax). 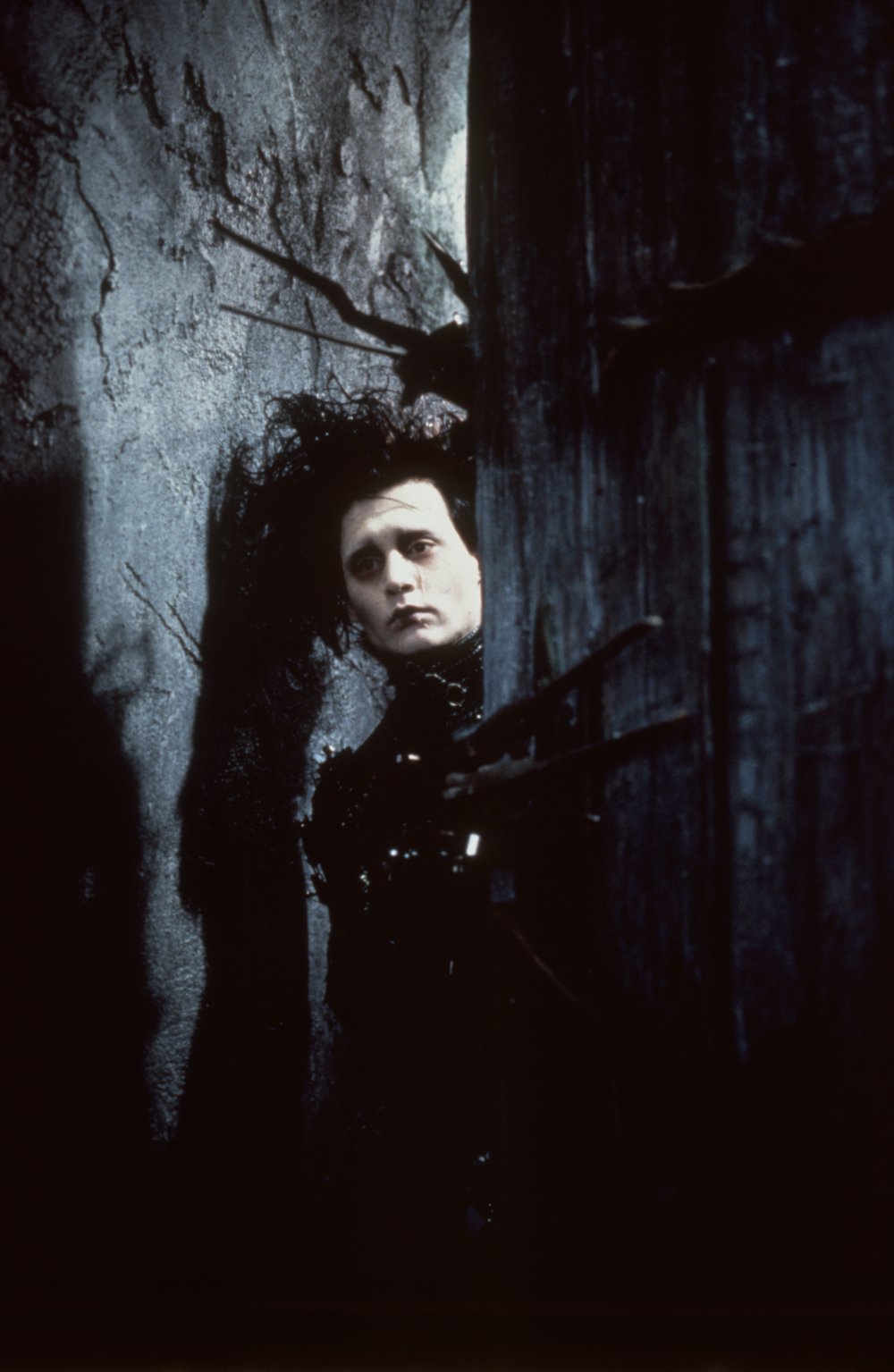 Of all contemporary American filmmakers, Tim Burton seems the most in tune with the classic fairytale tradition, even if he can’t help warping and twisting it along the way. Although based on an original idea (by Burton, fleshed out by screenwriter Caroline Thompson), its classic fairytale ambience is underscored by the fact that it’s told in the form of a bedtime story that attempts to explain where snow comes from.

Edward (a career breakthrough for TV pretty-boy Johnny Depp) is a desperately lonely artificial boy whose creator (Vincent Price in his last role) died before finishing the job, leaving him with scissors instead of hands, and while this makes him a wizard at both haircutting and topiary, he’s doomed to remain a permanent outsider, much like the Beast of Cocteau’s film. His Beauty is played by the teenage Winona Ryder, Depp’s real-life girlfriend at the time. 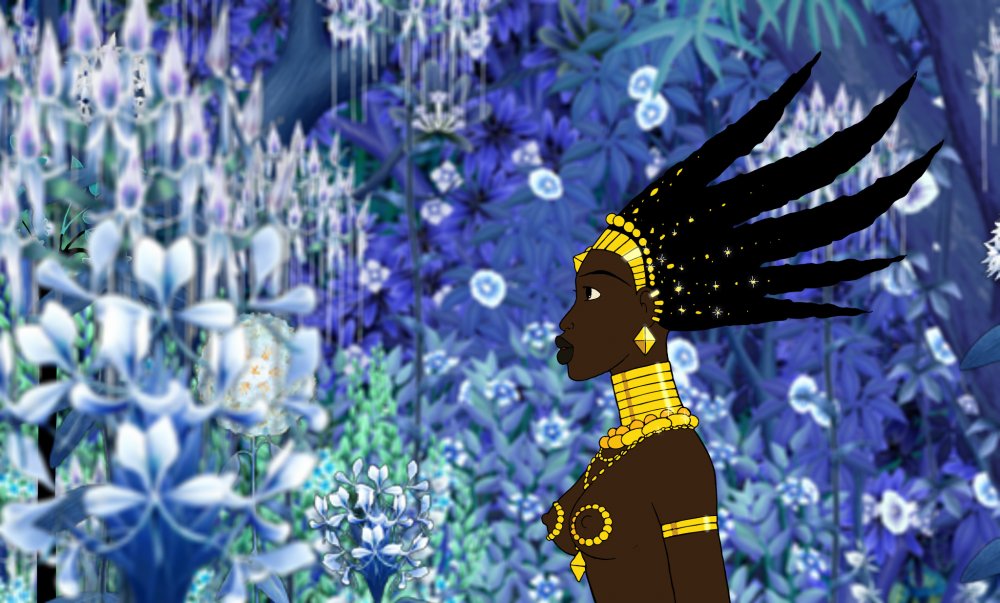 French director Michel Ocelot has spent the last four decades making exquisitely detailed colourful animated films inspired by both the folk culture and decorative arts of many countries from off the usual well-beaten track. The first Kirikou film, his international breakthrough, was inspired by west African folk tales about an intrepid boy who refuses to let his diminutive stature impede his efforts to persuade the sorceror Karaba to stop persecuting his fellow villagers.

In addition to drawing inspiration from traditional African art and music, Ocelot takes a refreshingly un-Disney-like approach to his material, not least in the copious but never gratuitous nudity (Kirikou begins the film by crawling out of his mother’s womb, impatient to hurry things along). Other Ocelot creations in a similar vein include the Middle Eastern-influenced Azur and Asmar: The Princes’ Quest (2006) and the Lotte Reiniger tribute Tales of the Night (2011). 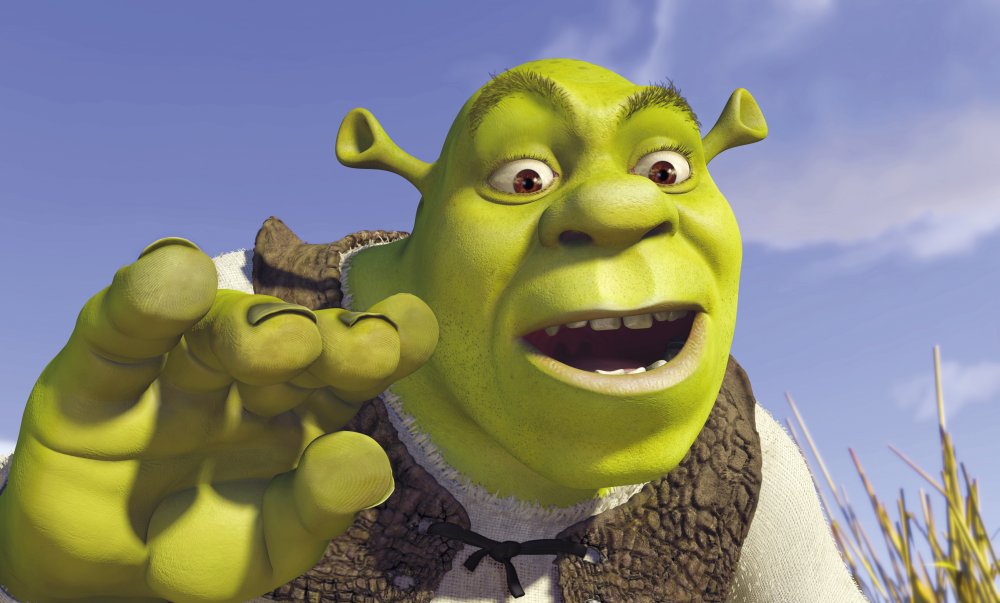 A huge hit that generated multiple sequels and a feature-length spin-off (2011’s Puss in Boots), DreamWorks’ Shrek combines an encyclopaedic knowledge of classic fairytales with a gleefully subversive wit, with Disney’s treatments in particular subjected to open mockery.

Shrek (voiced by Mike Myers) is a Scottish-accented ogre who wants to be left alone to enjoy the pleasures of his swamp – and is none too impressed when a gaggle of fairytale characters ends up there in enforced exile. Accompanied by a talking donkey (Eddie Murphy), he sets out to petition Lord Farquaad (John Lithgow) for their removal. It’s a quest that mimics many similar fairytale journeys, with some wickedly inventive twists along the way – not least a concluding gag that addresses the cop-out ending of the various versions of Beauty and the Beast. (When Shrek is finally rendered human in Shrek 2, he looks disturbingly similar to Gordon Brown.)

Fascist Spain circa 1944, five years after the Spanish Civil War, seems an unlikely setting for one of the more distinctive fairytale extravaganzas of recent years, but Guillermo del Toro brilliantly uses this historical backdrop as a springboard for a Narnia-like fantasy. Young Ofelia (Ivana Baquero) believes that she’s the reincarnation of the fabled Princess Moanna, whose curiosity about what lay above her father’s underworld kingdom ended up striking her blind.

While Ofelia’s archetypally wicked stepfather tracks down and tortures anti-fascist rebels, she escapes into an ancient and highly symbolic labyrinth. Here a faun compels her to perform three tasks that will definitively establish her true nature and allow her to escape her present nightmare. Both a supremely imaginative artist and an unusually intelligent commentator on the mythological roots of his work, del Toro proves that the traditional fairytale still offers plenty of creative mileage.