The best of seaside cinema, celebrating the spectacle of Brits released on the beaches. Simple pleasures, quirky traditions, brightness punctuated with violent attacks of darkness and gloom. It must be British summer time. 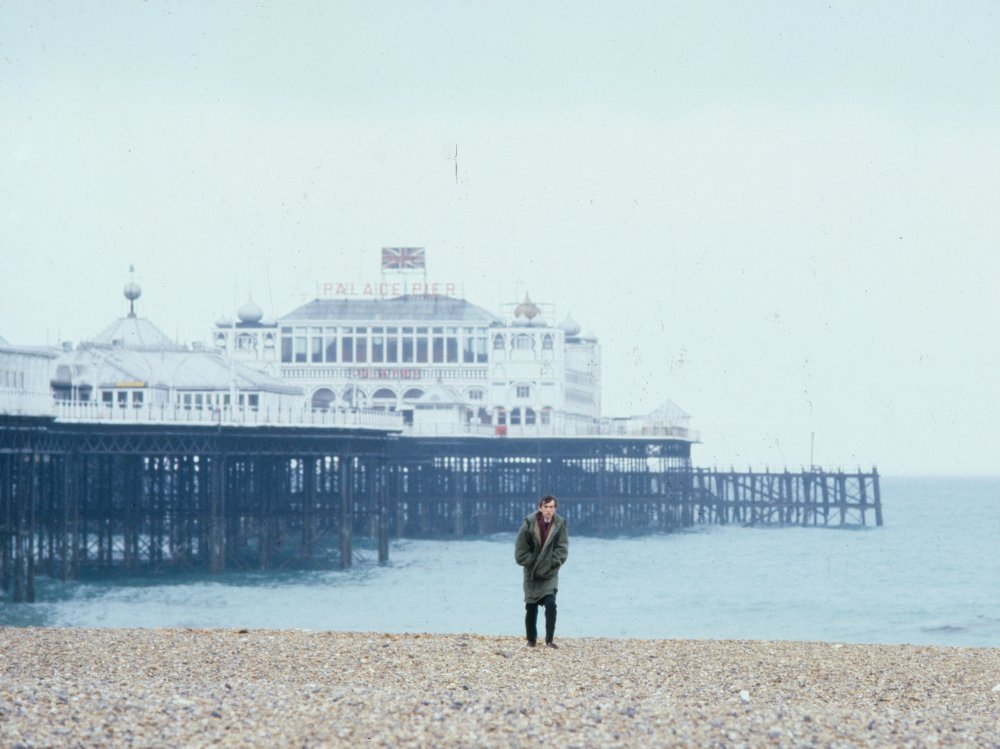 The British seaside resort was borne of Victorian splendour. Its grand piers and spotless promenades gave classy couples the chance to cast off their crinolines for bathing suits, and benefit from the fresh sea air. From the moment factories closed for the traditional ‘wakes week’ trips, the British working classes headed off to the coast in their masses. Train after train delivered workers for a well-earned few days of rest and relaxation, and the British seaside resort as we know it became a popular tourist attraction.

Cinema has often sought to capture the unique feeling of the British seaside town, both in and out of season. Documenting day trips with the family to enjoy the amusements and fairground rides, holiday camps, fish and chips on the seafront, boarding houses and bawdy humour. It’s a place of quirky traditions and simple pleasures, and that seaside spirit has fuelled many classic films. Some films celebrate the charms of the seaside, others peer beneath the surface and reveal painful truths, but all life has been represented on screen.

So, pull up a deckchair, grab yourself a 99 and reflect on the unique quirkiness of the British seaside resort on film. Don’t forget to send a postcard. 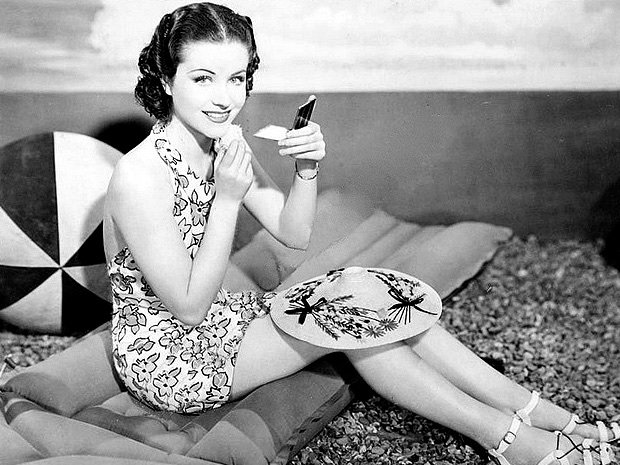 A sweltering August bank holiday in England. As the masses clamber to escape the city for the seaside, Bank Holiday follows the fortunes of three groups of Londoners. Amongst those boarding trains are nurse Catherine (Margaret Lockwood) and boyfriend Geoffrey (Hugh Williams) heading off for a clandestine weekend away. But she has her mind on her hospital patient, Stephen (John Lodge). Friends Doreen and Milly set off to enter a beauty contest and search for romance. Working-class couple Arthur and May are on a family excursion with their children, looking for an escape from the daily grind.

Bank Holiday perfectly captures the traditional British seaside day out in all its forms. The stories cleverly converge as the characters cross paths. A popular film with contemporary audiences, it established director Carol Reed’s reputation. It also serves as an important snapshot of society at the time, a rare glimpse of the everyday. 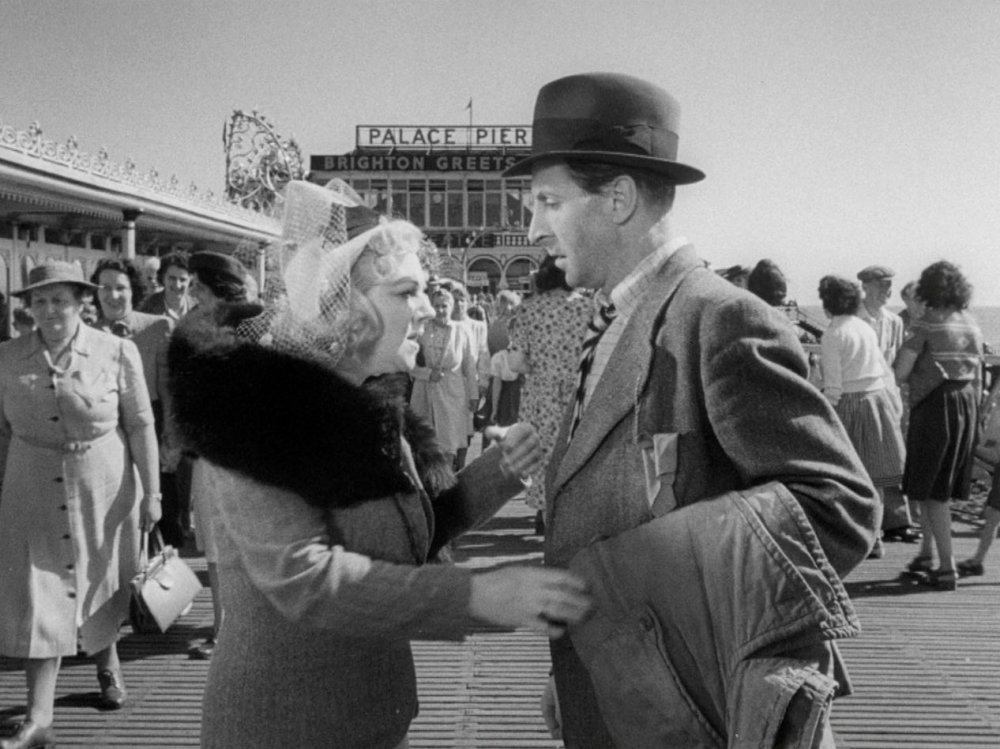 Brighton in the late 1930s, a town run by vicious mobs. Teenage gang leader Pinkie Brown (Richard Attenborough) kills a man at the fairground. He’ll do anything to cover his tracks and build a convincing alibi, even marry a key witness to guarantee her silence.

Based on the novel by Graham Greene, Brighton Rock is a pivotal British gangster thriller in the American tradition. It’s set loosely in the 1930s but has a feel of post-war austerity, and the location filming sets an evocative, realist tone. By showing Brighton’s cosy tea shops in sharp contrast with its dodgy bars and boarding houses, it captures the incongruity of the British seaside town. Attenborough is remarkable in the role of Pinkie, all intensity and terrifying menace. Brighton Rock was a foray into the gritty British crime thriller that became a staple in later years, and its influence can still be felt today. 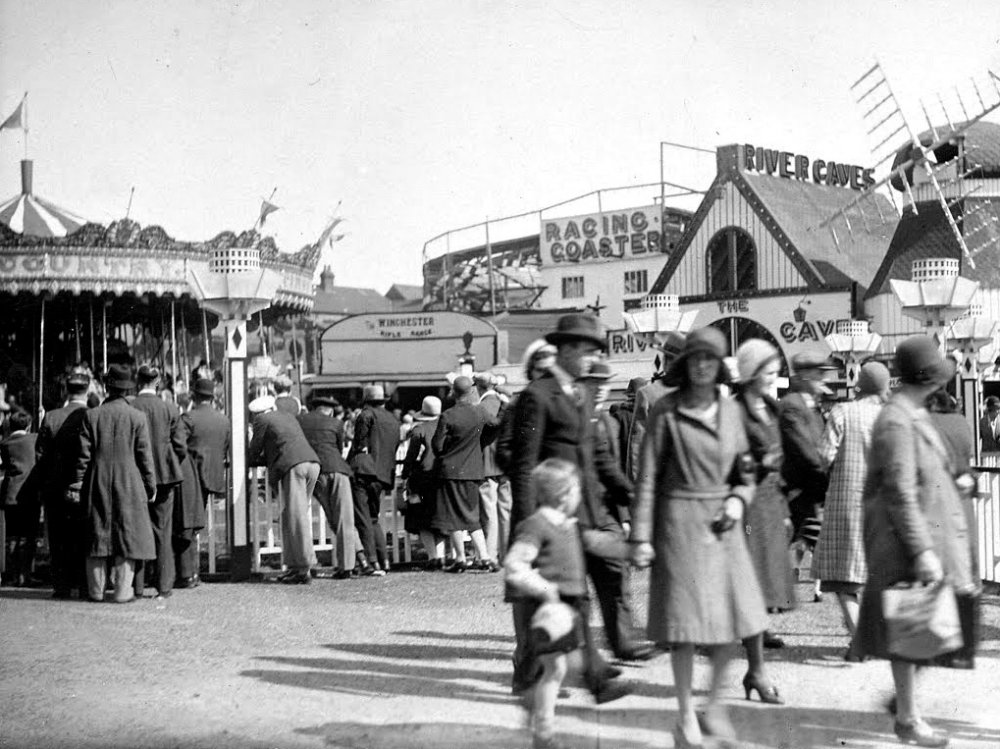 Lindsay Anderson’s seminal short documentary was screened as part of the first Free Cinema programme in 1956, although it had been made three years earlier. It provides a tour of the Dreamland funfair in Margate and documents the different attractions on offer; the arcades and funfair rides, the rather sinister looking mechanical puppets, the bingo, the bangers and chips. People are presented enjoying themselves with a naturalistic soundtrack, the usual traditional narration absent. Crowds of people enjoying themselves in their leisure time, letting go and doing their thing amongst the bright lights and big noise.

This is a film for changing times, a new way of documenting the real lives of the working classes. Plainly and candidly presented, there are thrills but no frills. It was an important step towards the ground-breaking cinematic realism of 1960s British fiction cinema and beyond. The film might be short, but its influence was long-lasting. 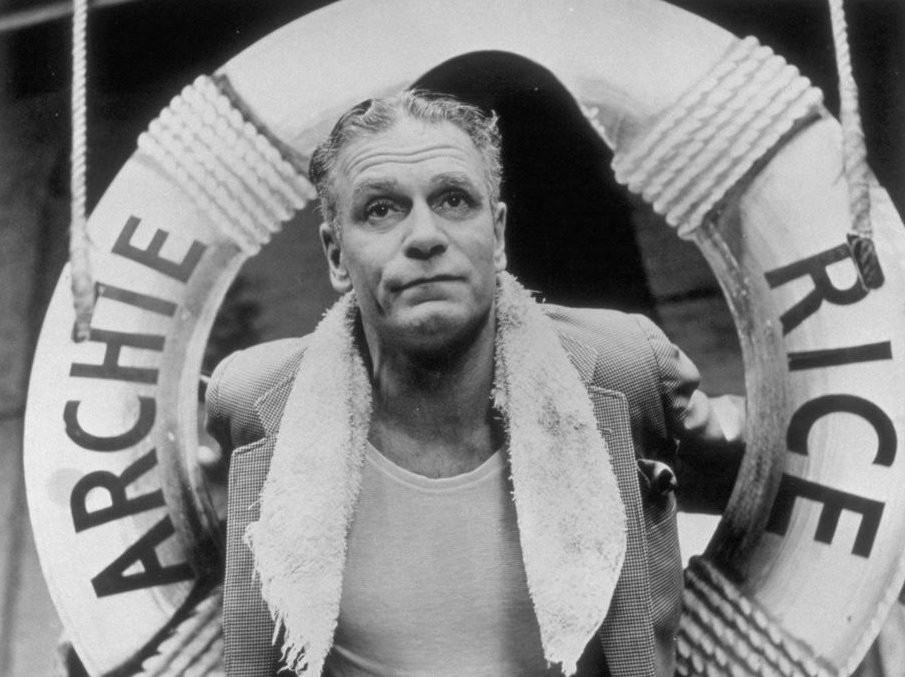 Archie Rice (Laurence Olivier) is a failing 1950s northern variety performer. He tries desperately to revive his flagging career but manages to alienate his family and risks losing everything to chase the last wisps of his fading showbusiness dreams.

Based on John Osbourne’s stage play, which was also directed by Richardson and starred Oliver, this redolent film recreates the decidedly British seaside aesthetic of seedy music hall vaudeville shows — the end of the pier tag shorthand for third rate and scruffy. Set in Morecambe, it has a dingy, realist feel that was all too familiar in northern seaside towns at the time. There is a palpable sense of decline throughout the film. It feels as though it isn’t just Archie that has reached rock bottom, his career is a symptom of a wider decay in society. 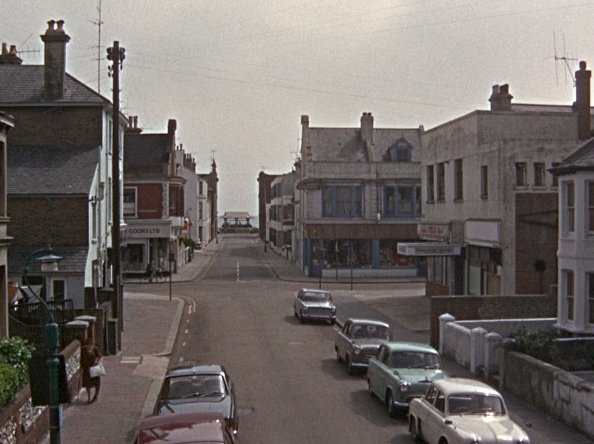 Based on the 1957 play by Harold Pinter, this claustrophobic film tells the story of Stanley (Robert Shaw) a lodger in a scruffy seaside boarding house run by landlady Meg (Dandy Nichols). He is visited by two strangers, and their menacing presence portents to a tormented end.

This film pulls no punches when it comes to portraying life away from the jolly seafront, and the grim reality of life in a coastal town out of season. People have fallen on hard times or are hiding from their history. The squalid seaside boarding house is a suffocating trap full of strangers. The food is grim and nausea inducing, and the milk is always off. The house is filled with shadows of trauma and mental disturbance and there is an overwhelming feeling of unease and an unknown threat of violence. This is a fascinating film. A clever, atmospheric Pinter adaptation which deserves more attention. 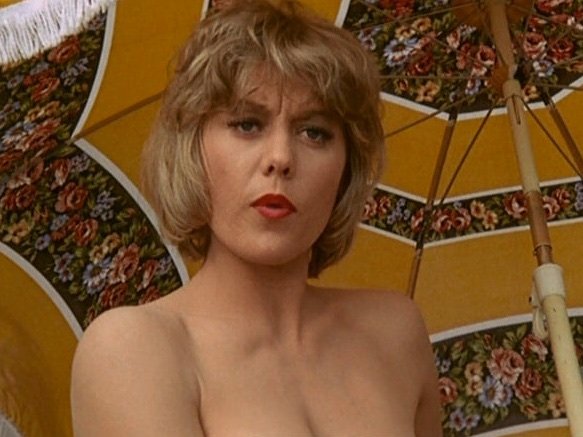 No celebration of the British seaside would be complete without a Carry On… film. Like a saucy seaside postcard to British cinema’s playful heritage, Carry On Girls is set in the fictional south coast town of Fircombe. It’s a resort on the slide, and town councillor Sidney Fiddler (Sid James) decides to turn its fortunes around by staging a beauty contest. But his colleagues have mixed feelings and the resulting showdown with the local Women’s Liberation Movement inevitably means the situation slides into farce.

This is a Carry On… of the later period and feels like a reaction to the rapidly changing social climate. It’s more risqué than its predecessors, and even includes an appearance from 1970s saucy film stalwart Robin Asquith. But there are familiar parochial characters who epitomise a small-town mentality ripe for ridicule. The fading British seaside of the period is represented as effectively as any social realist effort. 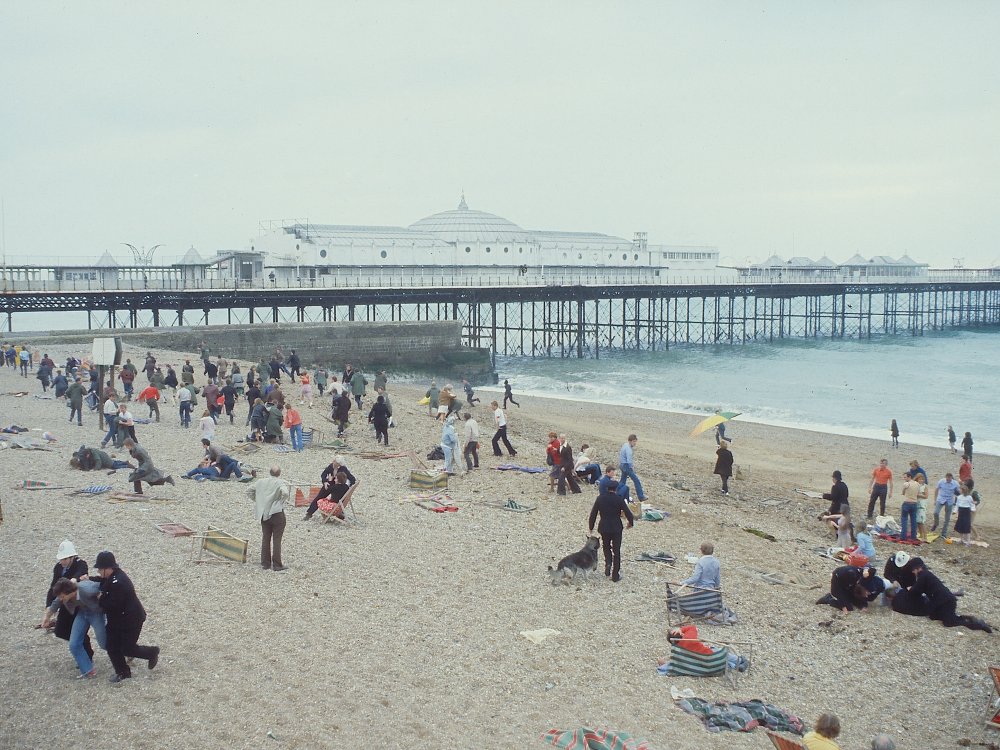 A film lauded for its influence on popular culture, Quadrophenia stars Phil Daniels as Jimmy, a young 1960s London Mod. Seeking escape from the monotony of his life, he rides his scooter, takes drugs and fights with Rockers. But his life soon unravels as his thrill-seeking gets out of control, culminating in a Bank Holiday showdown between the rival gangs on the Brighton seafront.

Loosely based on The Who’s 1973 rock opera, Franc Roddam’s gritty directing debut is stylish and assured. It feels like a film that actually understands young people rather than patronises them and encapsulates the importance of subculture and rebellion. The young cast is full of now famous faces, their raw frenetic energy adding to the sense of authenticity on screen. The film now feels synonymous with Brighton and bank holidays, the evocative locations and music as much a star of the film as the actors. 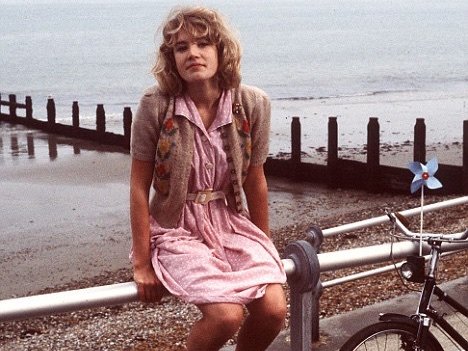 Wish You Were Here is a poignant, delicately observed coming-of-age drama based on the early life of Cynthia Payne. It tells the story of precocious 16-year-old Lynda (Emily Lloyd), who feels bored and frustrated by her life in a genteel south coast seaside town in the 1950s. With behaviour that sets the net curtains twitching, she encounters a friend of her father, the creepy and controlling Eric (Tom Bell), and is forced to make a life-changing decision.

With neat rows of seaside houses and the immaculate bowling green, everything has its place, except Lynda. Often seen riding her bicycle along the seafront, a toy windmill attached at the front spinning with the breeze as she moves, creating a feeling of playfulness and freedom in contrast to the starched attitude of the residents. The film encapsulates the distinctive identity of a small seaside town and the claustrophobia it can create. 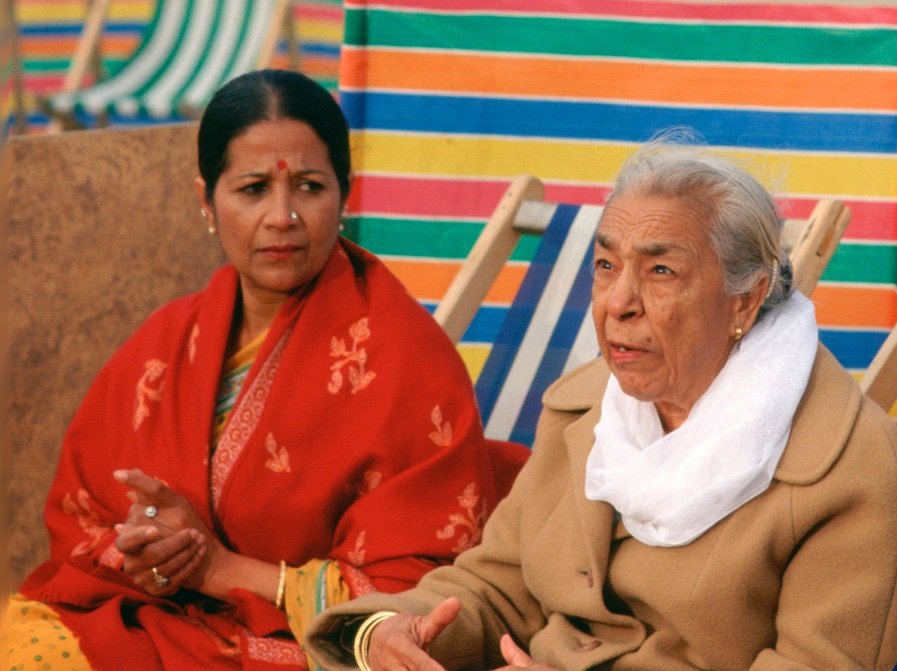 Written by Meera Syal and directed by Gurinder Chadha, gentle comedy road movie Bhaji on the Beach follows an Asian women’s community group from Birmingham on a day trip to see the Blackpool Illuminations. The women span different generations, with differing attitudes coming to the fore and exposing the gap between tradition and modernity in their community.

People head to the seaside to forget their troubles, but the women in this film can’t escape from them, they are right there on that minibus. Often though, a change of scenery can force you to finally address your problems and move on. Funny and whimsical, but with a social message at its heart, Bhaji on the Beach provides a fascinating juxtaposition as the women enjoy the traditionally white working class seaside resort of Blackpool. Their own microcosm of cultural challenges is a symbol of the changing social climate of early 1990s Britain. 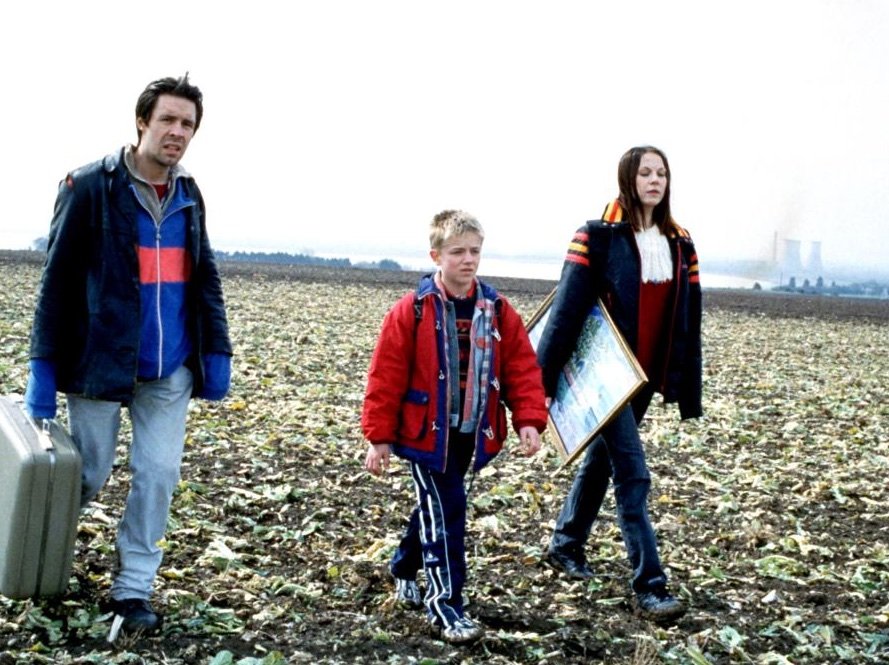 Tanya (Dina Korzun) and her son Artiom arrive in London to start a new life. When her fiancé fails to meet them, Tanya claims asylum, and they are confined to a holding centre in a deserted seaside resort. There she develops a relationship with local man Alfie (Paddy Considine).

This is a resort out of season and out of sorts, with Margate playing the role of fictional Stonehaven. Pawlikowski takes a uniquely British location and shows it sparse and desolate. Conveying an overwhelming sense of emptiness, it echoes with faded glories and ghosts of family holidays past. Like a prison camp, now it holds people in constant stasis, and their dreams of a better life captive. The situation is bleak, but there’s an overwhelming sense of love and acceptance within the unconventional triumvirate of characters. This is a compassionate story, which celebrates the kindness of strangers in a sea of hopelessness.