Don’t forget to vote… for any films you think we’ve left off our ballot of terrific films about British politics, politicians and life in Westminster. 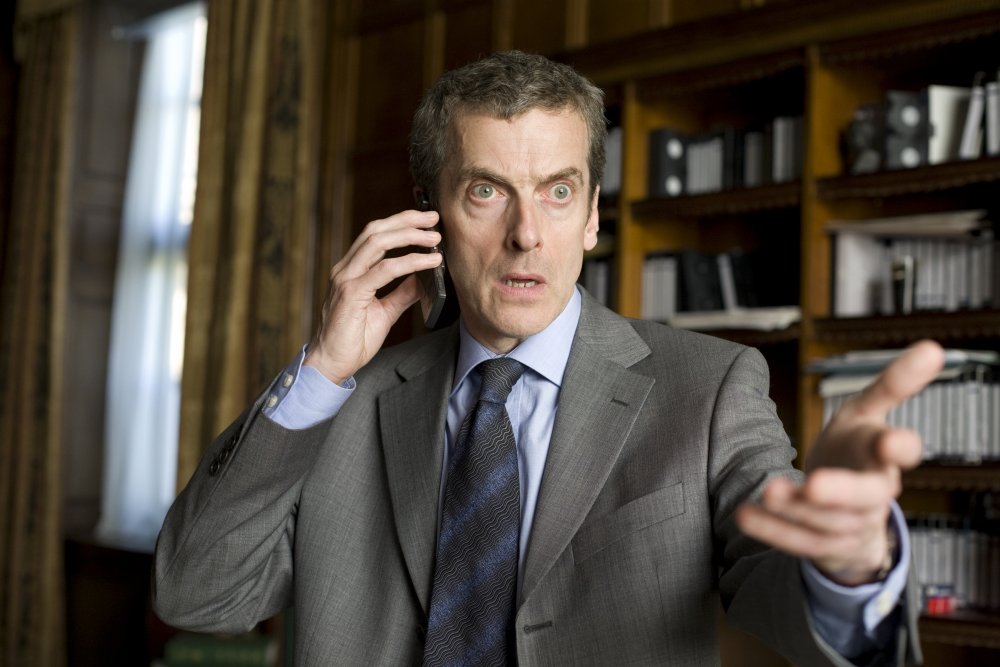 It’s easy to be under the impression that British politics comes up all the time in British feature films – after all, this is certainly true of British television. But once you take the small screen out of the equation, and also eliminate stories of individual activist movements that have less to say about the British political system itself (Made in Dagenham and Pride being good recent examples, Passport to Pimlico an excellent historical one), we’re left with surprisingly slim pickings.

It didn’t help that the British Board of Film Censors explicitly banned many political topics for much of the first half of the 20th century. A mid-1920s laundry list of forbidden subjects includes “inflammatory sub-titles”, “Bolshevist propaganda”, “British possessions represented as lawless sinks of iniquity” and even “references to Royal persons at home and abroad”, while BBFC president Lord Tyrrell notoriously boasted in 1937: “We may take pride in the fact that there is not a single film showing in London which deals with any of the burning issues of the day.”

Postwar relaxation of censorship permitted more overtly political subjects, but these generally weren’t considered very commercial. Television, particularly in the 1960s and 70s, provided a far more attractive platform for writers and directors who wanted to capture the political zeitgeist – something that also benefited from a short production schedule and rapid broadcast upon completion. By contrast, The Rise and Rise of Michael Rimmer was supposed to be released in the run-up to the 1970 general election, but a delay of several months blunted its satire. Television also brought such milestones as Days of Hope (1975) and A Very British Coup (1988) substantially bigger audiences than they would ever have realistically garnered on theatrical release.

That said, there are a handful of big-screen exceptions, many which have gained additional historical interest since they were made. Indeed, in many cases it’s hard to miss how certain things haven’t changed, be it the disillusionment of former idealists, the challenges of juggling public and private life and the Machiavellian machinations of spin doctors and advisors – the latter by no means a recent phenomenon. 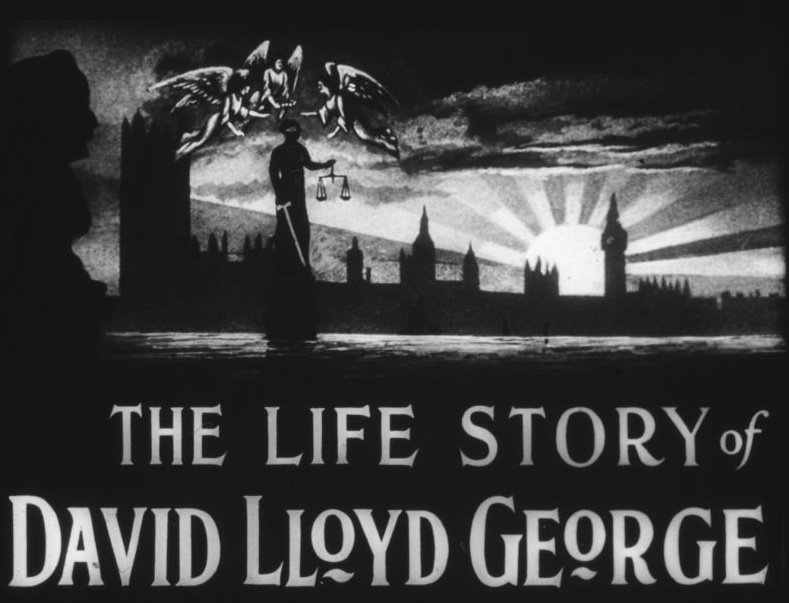 Big-screen biopics of politicians aren’t usually attempted until their subjects are either dead (The Young Mr. Pitt, Young Winston) or long retired (The Iron Lady). By contrast, David Lloyd George was the sitting prime minister – and although production proceeded with his blessing, he’s thought to have been directly involved with the film’s pre-release suppression, supported by the negative and only print being discovered among his grandson’s possessions.

At the 1996 world premiere, hopes weren’t high: the film was backed by prominent Liberal sympathisers and directed by a man with a largely deserved reputation as a prolific hack. Yet while its approach to its subject’s rise (rebellious schoolchild, crusading lawyer, progressive politician, prime minister) is unashamed hagiography, it also has a visual and narrative sweep that’s highly unusual for a British film of its era, especially when it comes to Elvey’s confident marshalling of large crowd scenes or the tableau-based visualisations of the effect that Lloyd George’s legislative milestones had on ordinary people. 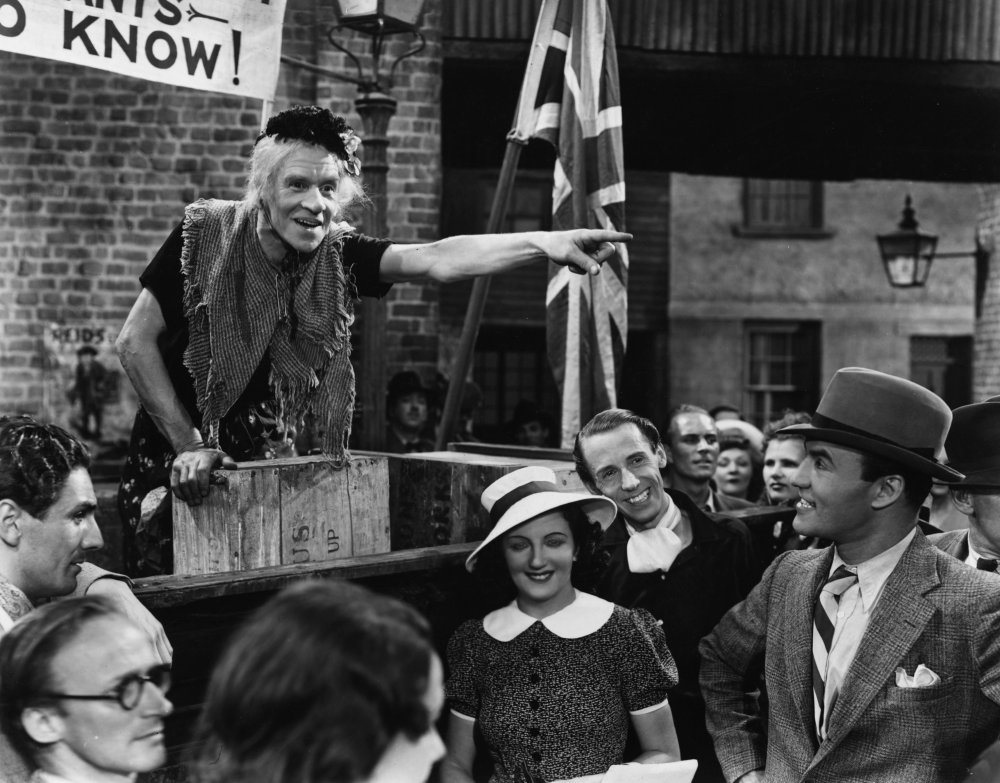 By rights, the 1939 film on this list should be Carol Reed’s The Stars Look Down – but censorship toned down the political aspects of A.J. Cronin’s source novel to such an extent that they became largely irrelevant. By contrast, the BBFC waved through this third screen vehicle for Arthur Lucan’s long-established music-hall drag act, presumably believing that nobody would take it seriously.

More fool them, because the film tackles a surprisingly wide range of topical political concerns, most notably that of corruption, vested interests and even foreign debtors. The plot is kickstarted by Old Mother Riley successfully running for parliament against her landlord, and then becoming the Commons’ champion of the northern working classes that were the film’s target audience. Promoted to the Cabinet, she asserts “Everyone shall be employed!” – a potent message to a country then between the Great Depression and WWII, even if it’s delivered by a comedian in a dress. 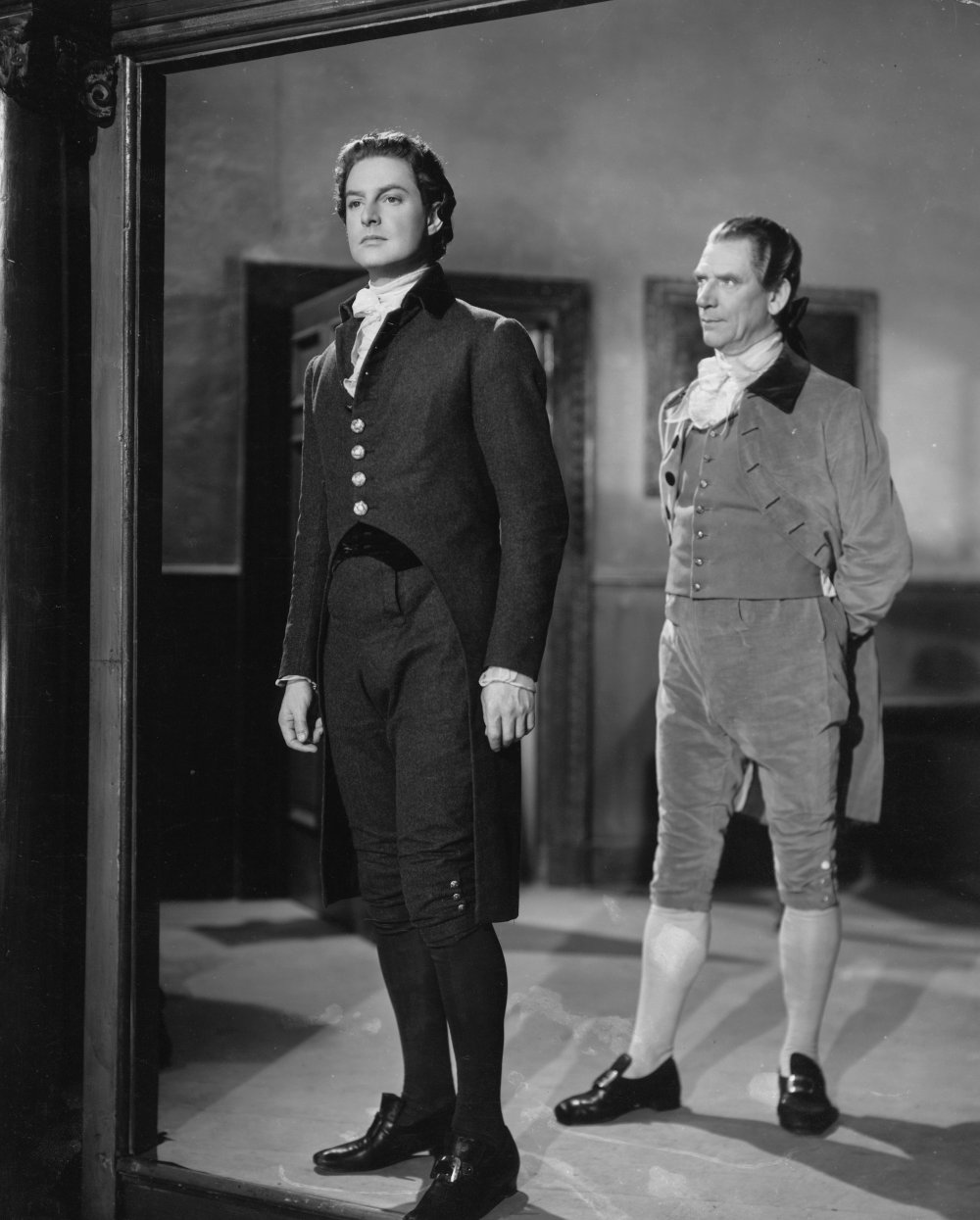 The early years of the Second World War saw the production of two prime ministerial biopics: The Prime Minister (1941), about Benjamin Disraeli, and the self-explanatory The Young Mr. Pitt, which starred Robert Donat (then one of Britain’s biggest stars) as William Pitt the Younger, depicted here against a backdrop of the French Revolution and the rise of Napoleon.

Even now, the parallels with Hitler’s empire-building are obvious, and nobody would have failed to pick up on the allegorical purpose of depicting Pitt as a lone warning voice against those bent on appeasement: the British film industry fought shy of depicting Churchill directly, so this was the next best thing. John Mills plays the reformer William Wilberforce, depicted here as Pitt’s sidekick and conscience – but the film is most interesting politically for its keen awareness of the importance of public opinion and the occasional necessity of ignoring its siren call for the sake of the longer-term good. 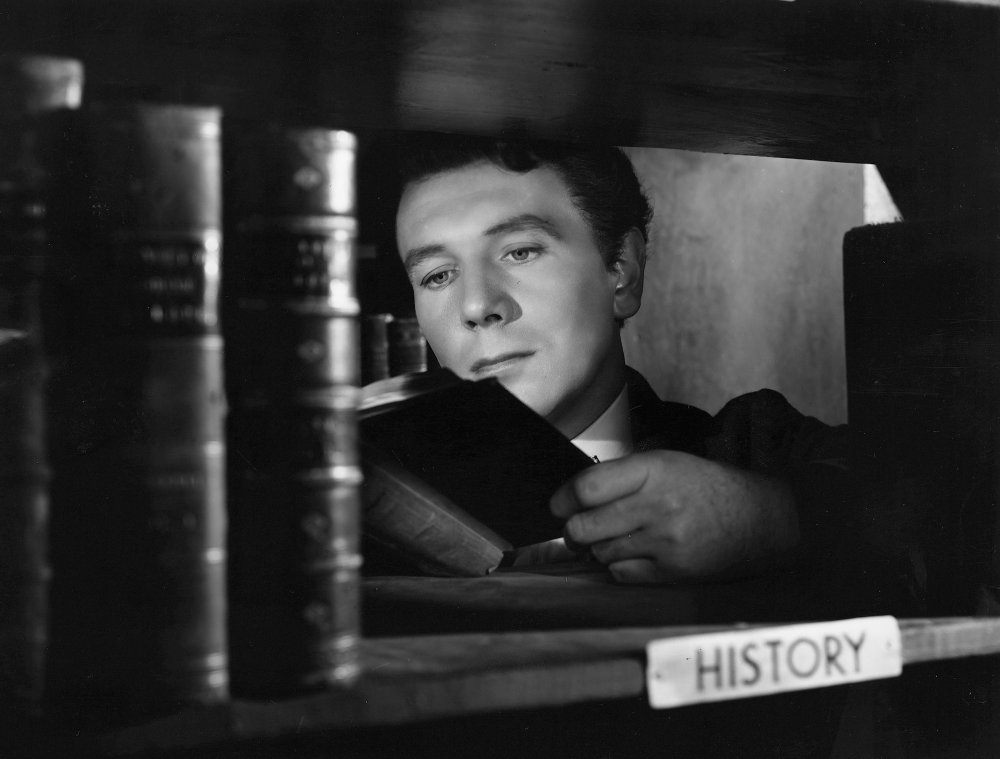 Howard Spring’s 1940 novel was a thinly-disguised portrait of the former Labour leader Ramsay MacDonald, a point emphasised by Michael Redgrave’s physical appearance in the Boulting brothers’ film adaptation. He plays fictional British politician Hamer Radshaw, whose journey from a Manchester slum to a place round the Cabinet table is paralleled by his willingness to compromise his originally impassioned socialist beliefs out of practical expediency – even to the point of strongly criticising his suffragette wife (Rosamund John), and accepting a peerage after his ultimate rejection by the electorate.

The Boultings went on to make many classic satires – notably Carlton-Browne of the F.O. and I’m All Right Jack (both 1959) – but this is their most politically impassioned piece, not least because it was released in the early years of Clement Attlee’s postwar Labour administration and could clearly be interpreted as a warning shot across its bows. 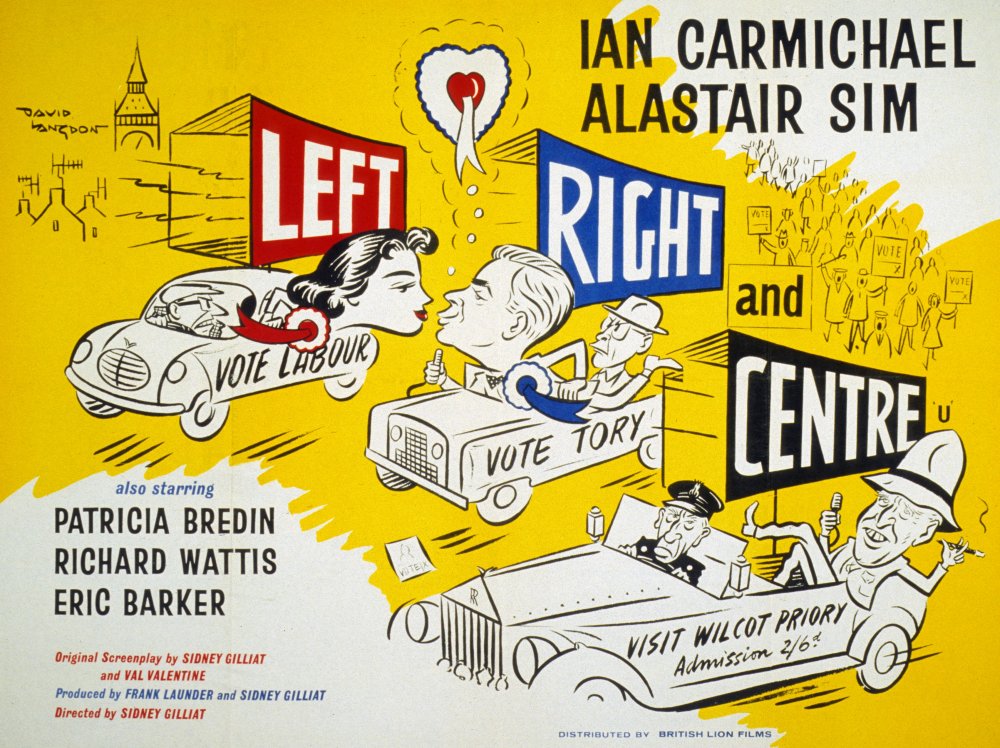 Frank Launder and Sidney Gilliat’s glory days were largely behind them when they made this breezy comedy, although it’s historically interesting both for offering a rare big-screen depiction of the British electoral process in some detail, and also for its observations about the increasing political influence of television and the decline of the English aristocracy.

Lord Wilcot (Alastair Sim) attempts to parachute his hapless nephew Robert (Ian Carmichael) into a safe Commons seat by engineering a by-election victory on his behalf so that he can help publicise his ancestral mansion, now a commercialised stately home. Unfortunately for his Machiavellian plans, Robert meets and falls for his Labour opposite number (Patricia Bredin) during a train journey to the constituency, and their growing romance undermines the public image of “a bitter struggle” that their increasingly frazzled election agents are attempting to sell to the voting public – meaning that they too have to form an alliance if only to prise their candidates apart. 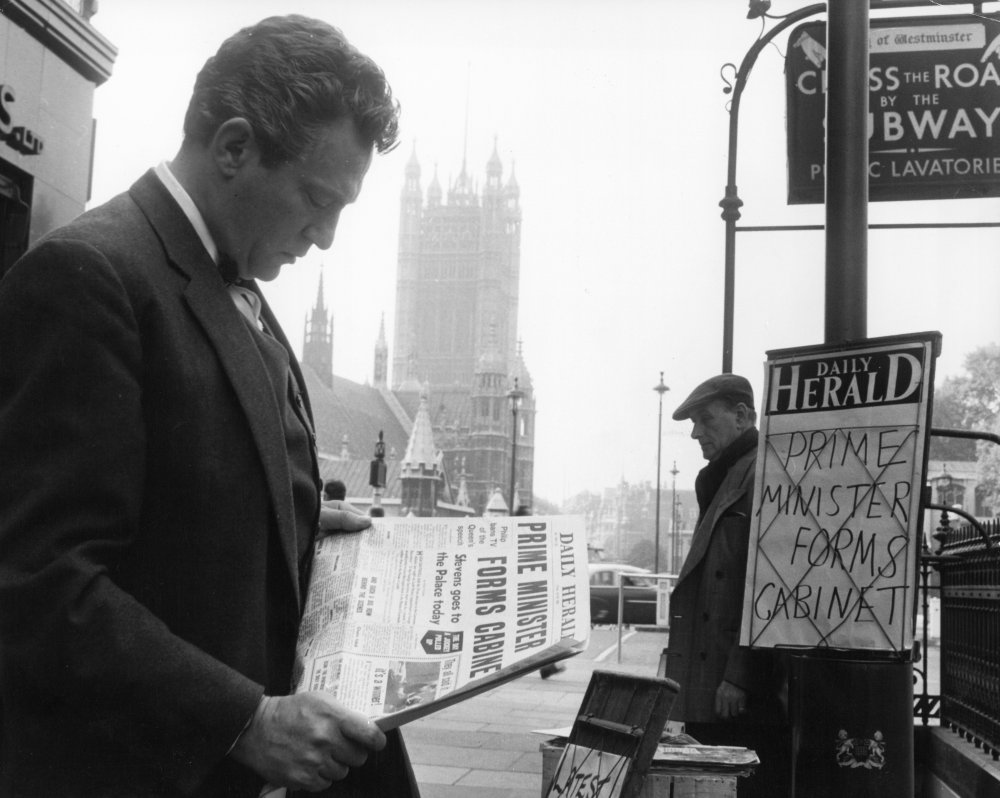 Before his 1958 death in a car crash, Labour MP Wilfred Fienburgh wrote a novel that crystallised his disillusionment with the way that the Labour party was heading in the 1950s. His fictional MP Johnnie Burke (brilliantly played by a BAFTA-winning Peter Finch) initially seems to have everything going for him – at 42, he’s young for an MP, and ruggedly handsome with it – but he has to strike a constant and increasingly delicate series of balances between his public and private life, between long-term ambition and short-term expediency, and between his increasingly unhappy marriage and his genuine love for his much younger mistress (Mary Peach).

An adulterous MP would barely turn a hair these days, of course, but over half a century later the film’s key themes of disillusionment and betrayal (especially by and of parliamentary colleagues) remain all too valid. Stanley Holloway’s (very) Old Labour veteran and Donald Pleasence’s wily plotter are also all too recognisable. 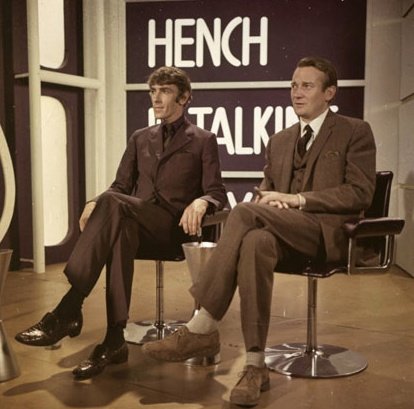 Co-scripted by the film’s star Peter Cook, director Kevin Billington and nascent Pythons Graham Chapman and John Cleese, The Rise and Rise of Michael Rimmer charts the ascent of Cook’s eponymous polling expert to the very top of the political tree by making use of every PR technique at his disposal in order to boost his own image ahead of that of his various clients – who at one point include the leaders of both major political parties.

What does Rimmer stand for? Who knows – and, more relevantly, who cares? By using the most up-to-the-minute polling techniques he can determine exactly what the public wants, and work out the most efficient means of delivering it to them, at least in appearance if not in substance. Cook later admitted that executive producer David Frost was just as much a satirical target as contemporary politicians like Harold Wilson, Edward Heath and Enoch Powell. 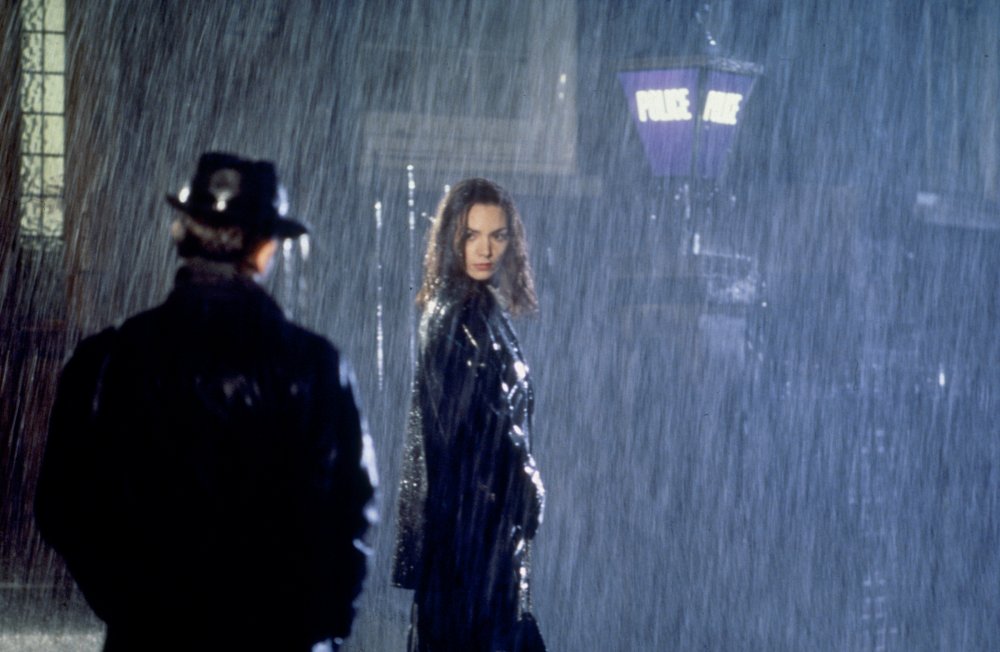 Despite the claims made for the 2009 MPs’ expenses affair, the furore that broke in 1963 when John Profumo, the minister for war in Harold Macmillan’s already troubled government, admitted to the House of Commons that he’d been having an affair with Christine Keeler, a teenage model who was also involved with a Soviet naval attaché (and this mere months after the Cuban missile crisis), remains the high-water mark of British political scandals.

Ian McKellen plays Profumo in this big-screen dramatisation, although the dramatic focus is on osteopath Stephen Ward (John Hurt), whose relationship with Keeler (Joanne Whalley) and his desperation to blend in with what he saw as the leading lights of the British establishment ultimately ended in tragedy with his scapegoating and suicide. It was the end of an era that’s recreated here with painstaking attention to period detail, the better to offset its many temptations and hypocrisies. 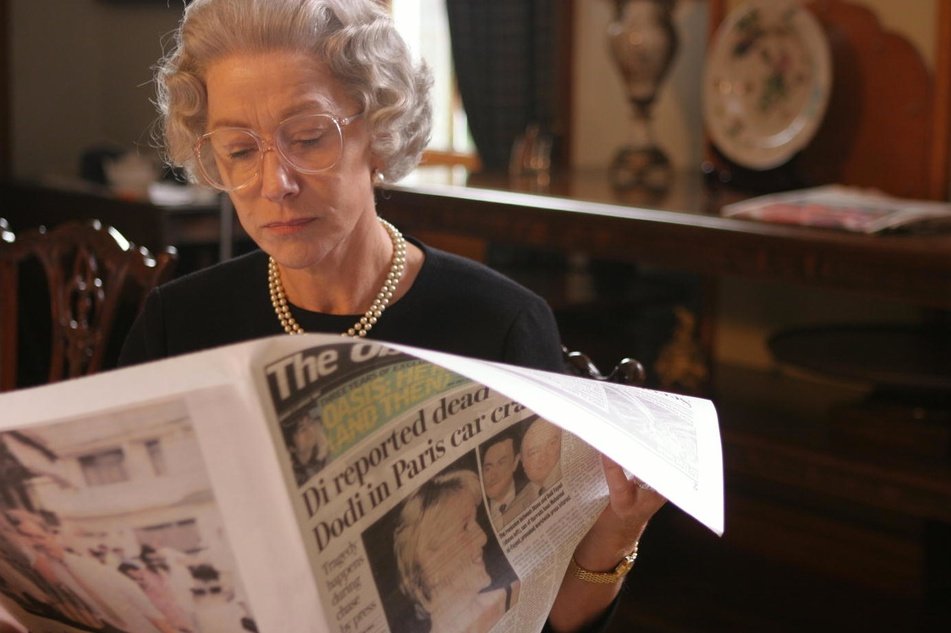 In the last decade there have been two Oscar-winning portrayals of the two most significant female British political figures of the last half-century. But while Meryl Streep’s uncannily accurate Margaret Thatcher in The Iron Lady (2011) lacked a worthy dramatic vehicle, Helen Mirren’s Queen Elizabeth II was at the heart of this unexpectedly witty and engrossing comedy of manners set during the first week of September 1997 when the bond between the royal family, the British political establishment and the wider populace seemed strained to breaking point in the wake of Princess Diana’s death.

Much of the film concerns the private discussions between the Queen and prime minister, Tony Blair (Michael Sheen). Still fresh from a landslide election victory, he’s more in touch with public opinion than she is, and more keenly aware of how the monarchy and its constitutional relevance was coming under serious threat. But how can he explain this to someone who ascended the throne before he was born? 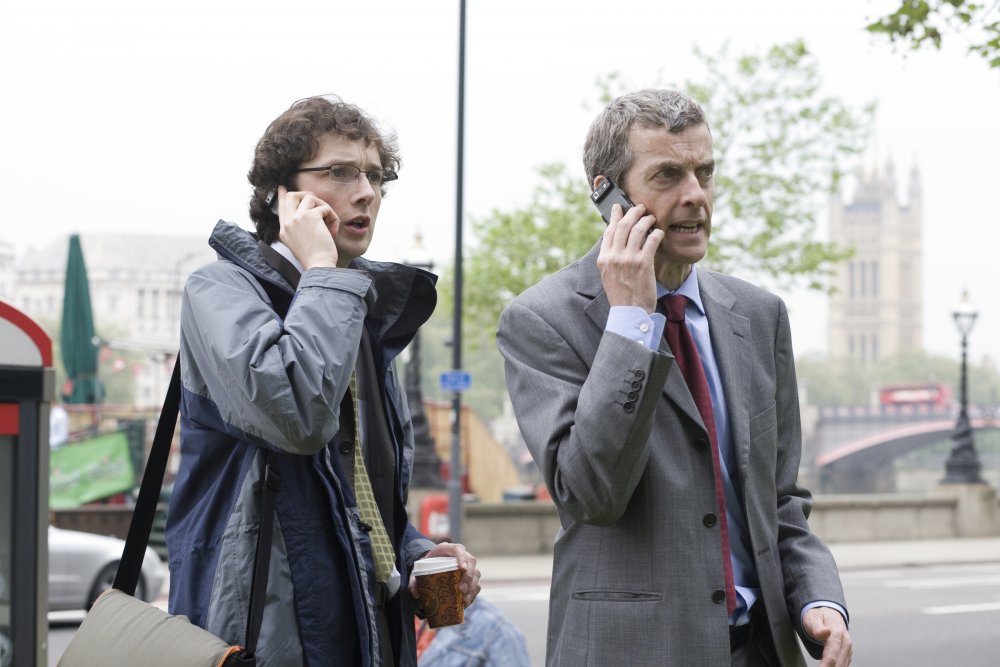 The Queen’s author Peter Morgan later wrote the TV movie The Special Relationship (2010), about the political partnership of Tony Blair and Bill Clinton, but it wasn’t half as funny as Armando Iannucci’s ferocious assault on Anglo-American political relations. Loosely based on Iannucci’s BBC sitcom The Thick of It (2005-12), from which it takes Peter Capaldi’s spin doctor Malcolm Tucker and his demonic mastery of Rabelaisian invective, it’s also a forensic examination of political impotence at a time of national crisis – an unspecified Middle East war – and the crucial role played by behind-the-scenes string-pullers on both sides, of which Tucker is merely the most verbally aggressive.

Like all great satires, it’s both hilarious (few recent British comedies have quite so many killer lines per scene) and terrifyingly clear-sighted, both aspects neatly summed up by the one-line description of some unnervingly young State Department employees as “like Bugsy Malone, but with real guns”.