Get in the ring with these 10 knockout boxing movies, as Sylvester Stallone returns to the screen with Creed, the latest instalment of the Rocky saga. 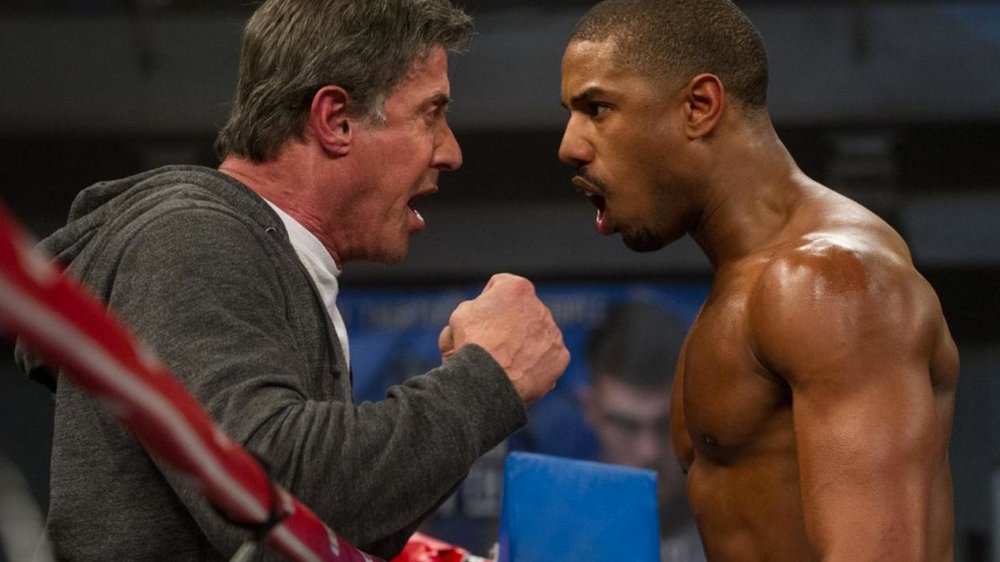 Watch any documentary on late-career Muhammad Ali or Joe Louis and it’s pretty apparent as to why boxing is such a cinematic staple. Faustian pacts, violence, glory, and nearly inevitable decline – sometimes spectacular self-immolation – are par for the course. From expressionistic, smoke-filled rings to cigar-chomping promoters, the boxing film has a familiar iconography, and a rags-to-riches narrative pattern to go along with it. From the shadowboxing to the rings and gloves, there’s a symbolism that almost seems ritualistic. Filmmakers as disparate as Buster Keaton and Martin Scorsese have offered their own interpretations – suffusing the natural drama of boxing with slapstick comedy, tragic melodrama, and even political allegory.

But it’s Hollywood’s most famous fictional fighter, Rocky Balboa, who now returns to our screens. Michael B. Jordan stars as the son of Rocky’s most famous opponent in Creed, the series’ seventh film. Adonis Creed moves from his swanky white mansion in LA to a nondescript walk-up in Philly, where he enlists the old pug as his trainer. It’s a propulsive, thrilling story, with a constantly swirling and tracking camera following the unlikely friends’ spirited training regime. It captures the realistic HBO glitz around the sport; the televised speculation, the trash-talking, the press conferences and weigh-ins.

It’s been a few years since a truly noteworthy boxing film has been released. But with a spate of upcoming releases this year – from Lenny Abrahamson’s The Emile Griffith Story to Miles Teller-attached Bleed for This – it feels like Creed is at the forefront of a rehabilitation. It may be that the old film noir staple is coming back to audiences at last. In the meantime, here are 10 essential boxing films from the past. 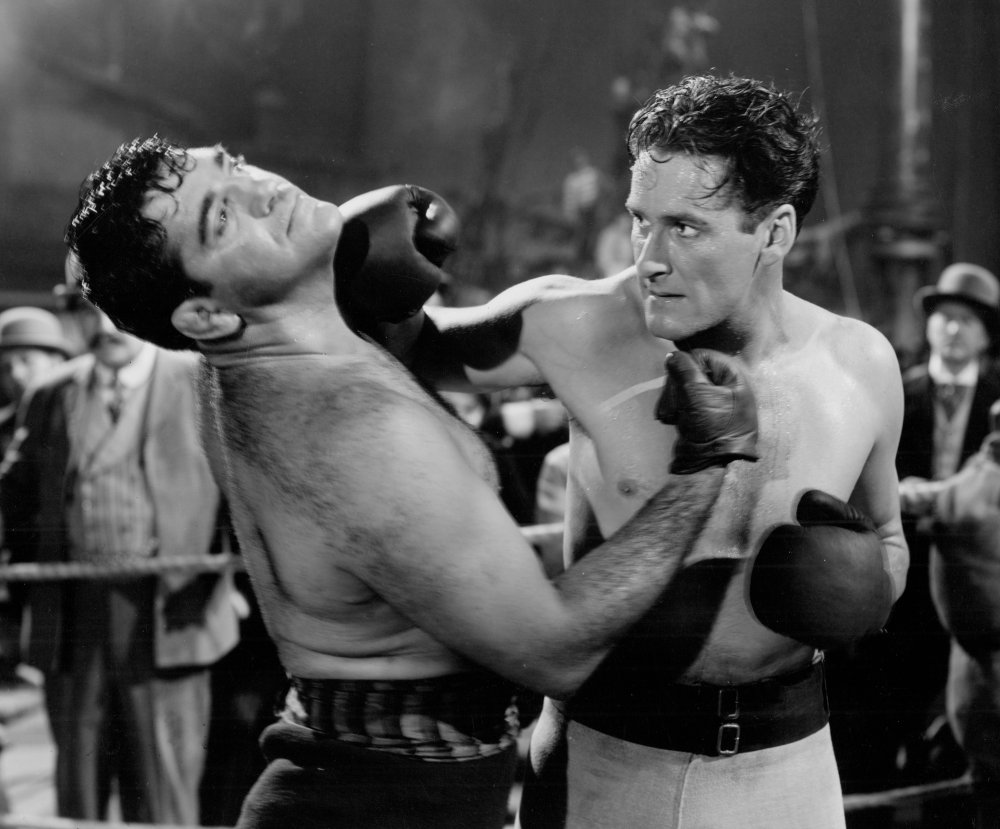 Apparently, Gentleman Jim is Mike Tyson’s favourite boxing film. Take from that what you will, but at the very least it’s a testament to the movie’s accuracy. This lighthearted biopic captures an important historical transition in the 1890s – from bare-knuckle boxing to modern sports regulation. Errol Flynn is typically dashing as ‘Gentleman’ Jim Corbett, the man who rose to fame and brought the Marquess of Queensberry rules with him. Coming from a raucous Irish family who regularly tumble into fisticuffs, Corbett is spotted for his potential and trained to face champion brawler John L. Sullivan.

Raoul Walsh, a contract director at Warner Brothers well known for his bravado, is a perfect fit for the material; he stages fights carefully, but with breezy physical humour. Particularly memorable is a chaotic illegal bout staged on a raft in the Frisco bay – naturally, it’s raided by police. 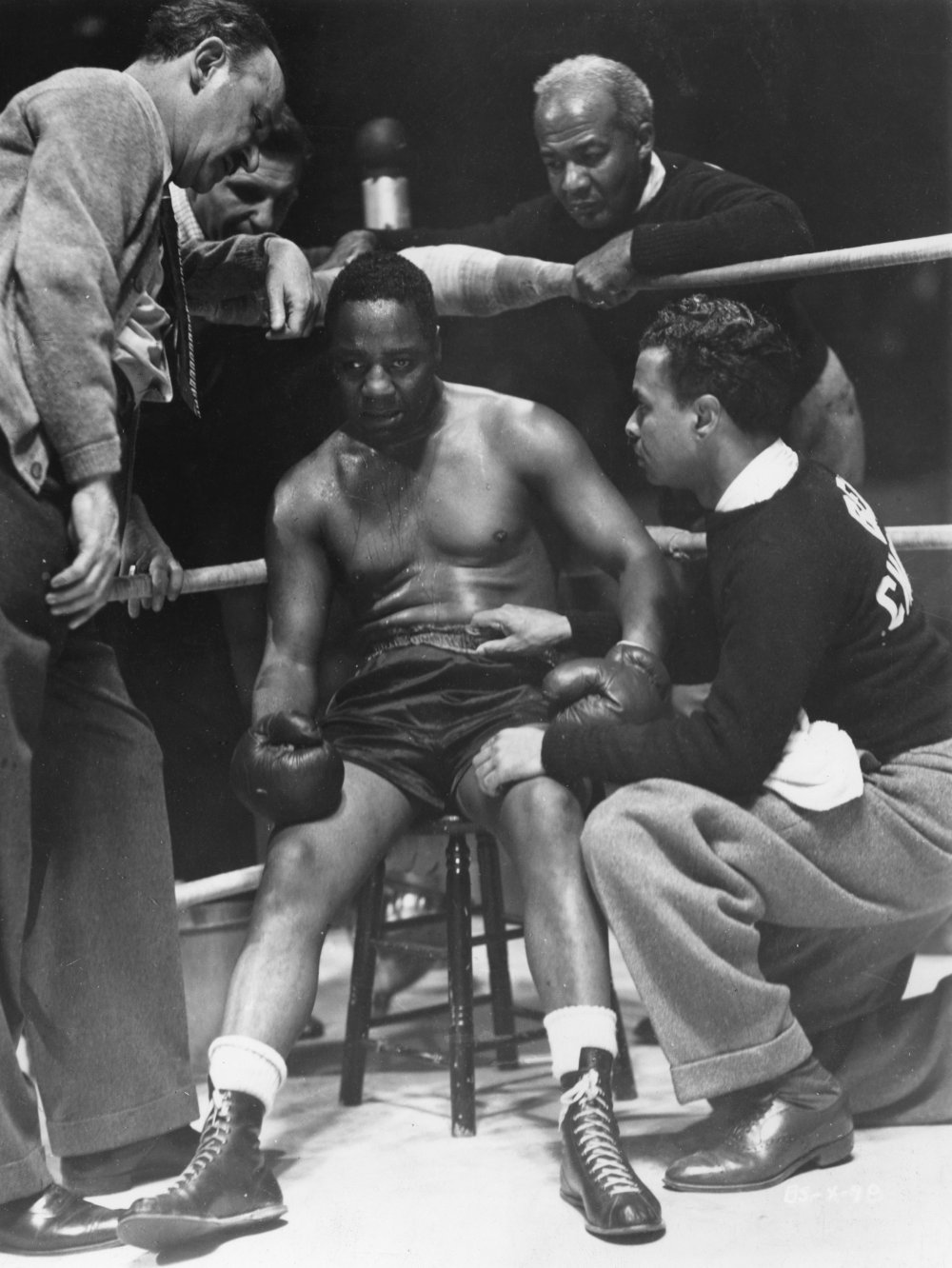 This lefty parable about the stratospheric rise of a working-class Jewish fighter may well be the Citizen Kane of studio-era boxing films. It’s certainly one of the most visually accomplished – filmed in smoky, high-contrast black and white by cinematographer James Wong Howe. Howe used eight different cameras to capture the matches, even filming on roller skates at times.

The film’s writer, director and stars were all committed to left-wing causes and were later victimised by the House UnAmerican Activities Committee (HUAC), but not before they managed to show fighter Charley Davis (John Garfield) exploited by corrupt, capitalistic promoters. Both sympathetic and misguided, he makes greedy decisions at every turn. But Garfield must show solidarity with his old blue-collar community – and, tellingly, with a retired black fighter, Ben (Canada Lee), whose memory he must fight to protect. If he doesn’t, he’ll have far more to lose than a shot at the title. 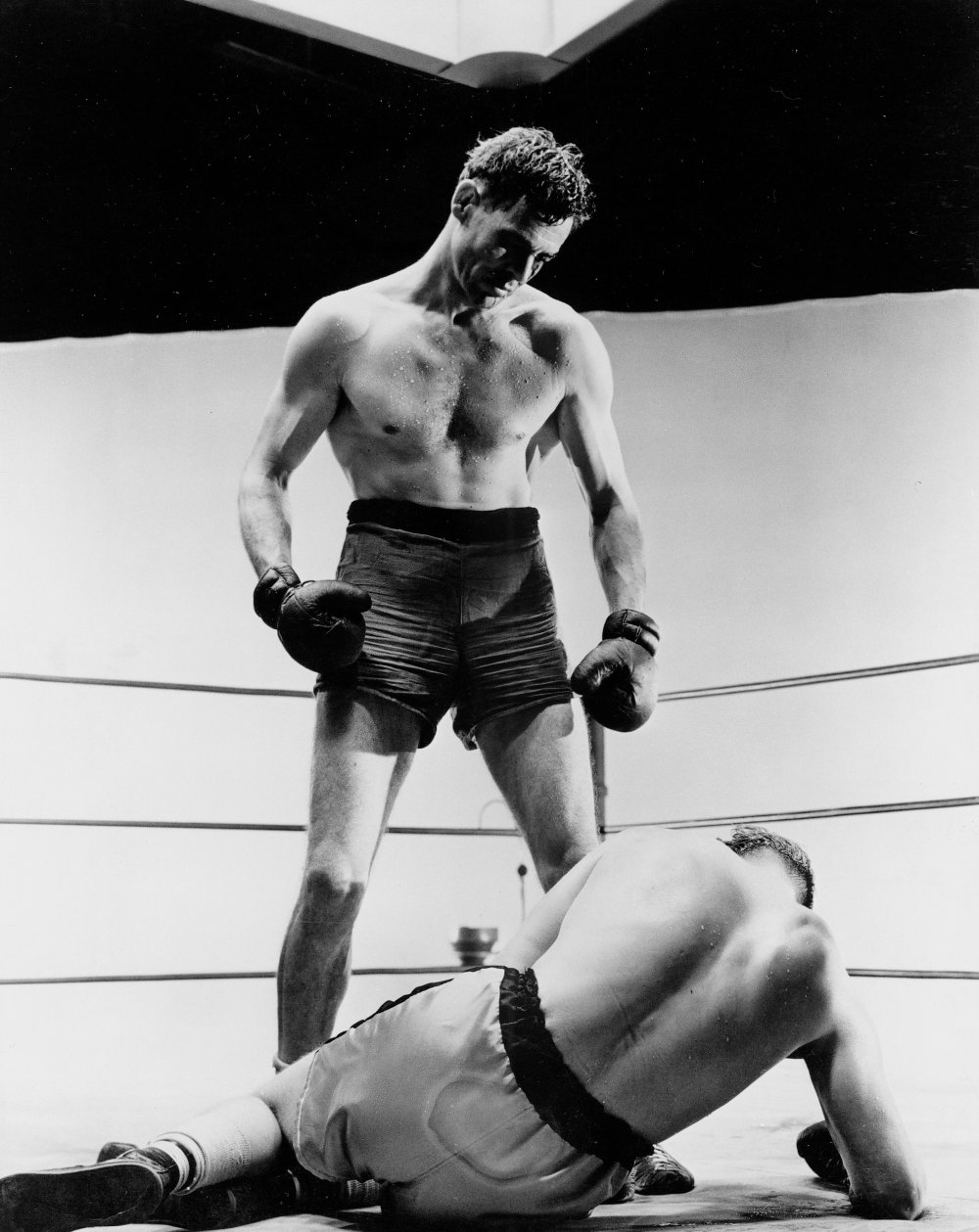 Real life ex-fighter Robert Ryan stars as an ageing journeyman preparing for a tough fight in this lean noir mood piece. His concerned wife (played by Audrey Totter) urges him to quit, but he presses on, unaware that it’s been arranged that he throw the fight. Clocking in at a queasy 72 minutes, this film noir might be one of the most pessimistic depictions of the sport ever put on screen – a jaded look at a thoroughly rotten business.

Director Robert Wise was a lifelong sports fan who artfully choreographed fight scenes and based his bloodthirsty audience on real-life crowds. One journalist at the time was said to have noted: “Any more pictures like this and they’ll be establishing a ban on prize-fights.” 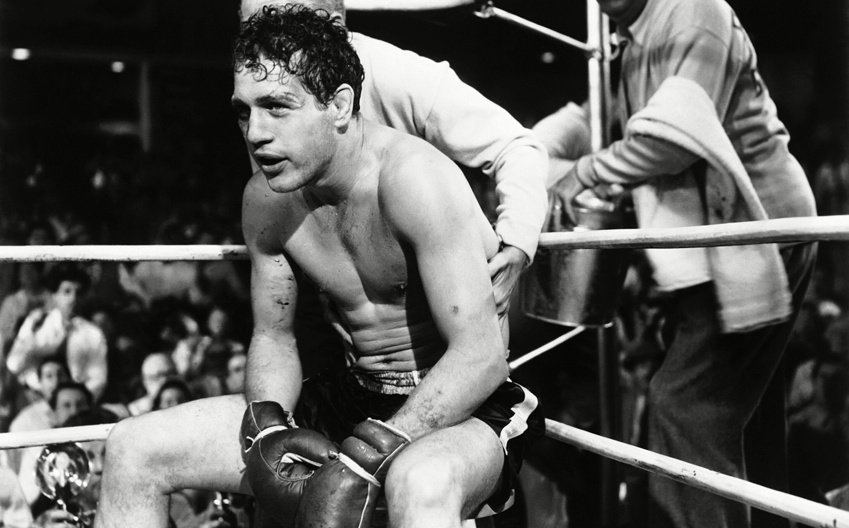 Paul Newman was 31 in his first really notable role – the celebrity-endorsed life-story of middleweight champ Rocky Graziano. All Newman’s method training must have come in handy, given that the blonde all-American boy was playing an Italian-American juvenile delinquent. He just about pulls it off; though he’s got a beginner’s tics, they can’t disguise his charm. Newman’s crooked, ne’er-do-well persona would serve him well into the 1960s.

Presaging the interest director Robert Wise would show in New York gang culture with West Side Story (1961), the film looks into Graziano’s troubled upbringing and family life. It never shies away from his violent past and army desertion. He’s full of swaggering nonchalance, but in true 1950s style, it’s really the steadiness of a loyal wife that he needs. A favourite scene takes place outside the realms of the gym, when Rocky tries to walk Pier Angeli’s Norma home. The consummate tough finds himself suddenly and adorably tongue-tied, and a walk to the station becomes a late-night odyssey across the city – out of sheer awkwardness. 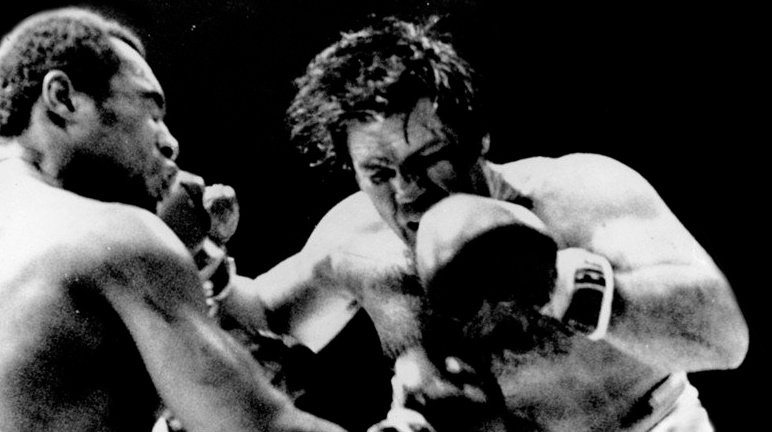 Cassius Clay (prior to his rebirth as Ali) appears in the first few shaky frames of Requiem for a Heavyweight. This is via a remarkable PoV shot, wavering as Clay, a fierce opponent, comes in for the knockout. The camera wobbles, goes out of focus, and clatters to the floor. We soon discover the man in that heap is ‘Mountain’ Rivera (Anthony Quinn), an oafish, good-natured heavyweight who’s been in the ring for too long.

Forced to retire for his health, Rivera must seek out whatever employment is available to him – and that turns out to be very little. Requiem for a Heavyweight was written by Twilight Zone creator Rod Serling, an army boxer himself, and was adapted multiple times for cinema and television. Ralph Nelson’s 1962 version features Jackie Gleason as Rivera’s shifty old manager and Julie Harris as the kindly unemployment clerk who dates the fighter. 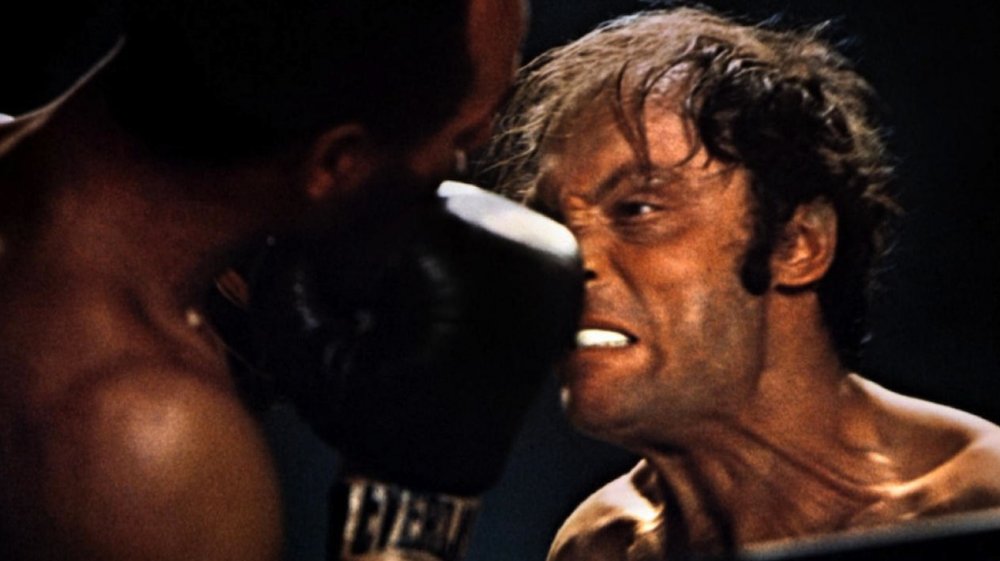 John Huston’s sun-drenched neo-noir is a grim saga of has-beens and would-be’s, starring Stacey Keach as the former and Jeff Bridges as the latter. Set in the fading California town of Stockton, the elder and younger boxers train together in the hopes of achieving something beyond the realms of their decaying surroundings. But alcohol and false hope prove equally treacherous. With a melancholy soundtrack from Kris Kristofferson, Fat City has a real air of existential malaise. 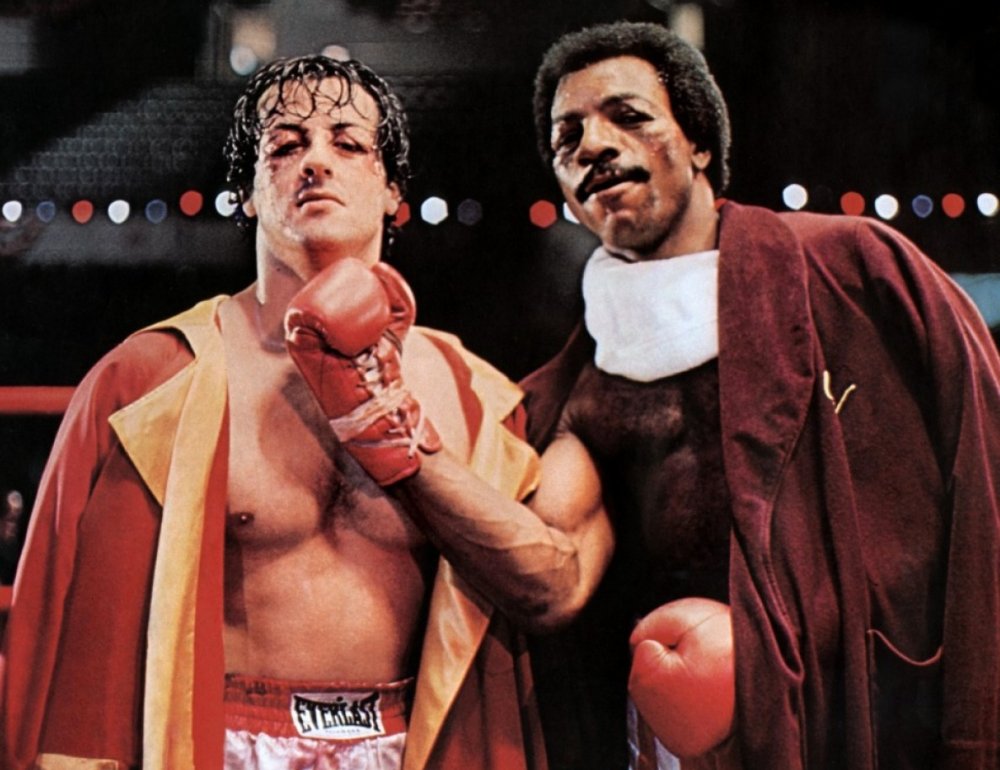 It’s compelling to realise how much audiences tend to misremember Rocky – how it’s conflated with its (lesser) sequels, how gritty and quasi-‘New’ Hollywood it feels, and how utterly class-oriented its depiction of Rocky’s existence really is. It speaks so directly to the under-educated, under-employed men of late 1970s America. Rocky seems to address that man’s confusion and loneliness; bolster his hidden virtues and tenacity.

Sly Stallone’s ‘sensitive brute’ routine was scoffed at by some, but as time goes on the performance only seems more nuanced and lovable. Back in 1976, Pauline Kael was brave enough to compare Stallone to Brando – silly, perhaps, but in this role it’s hard to imagine anyone greater. 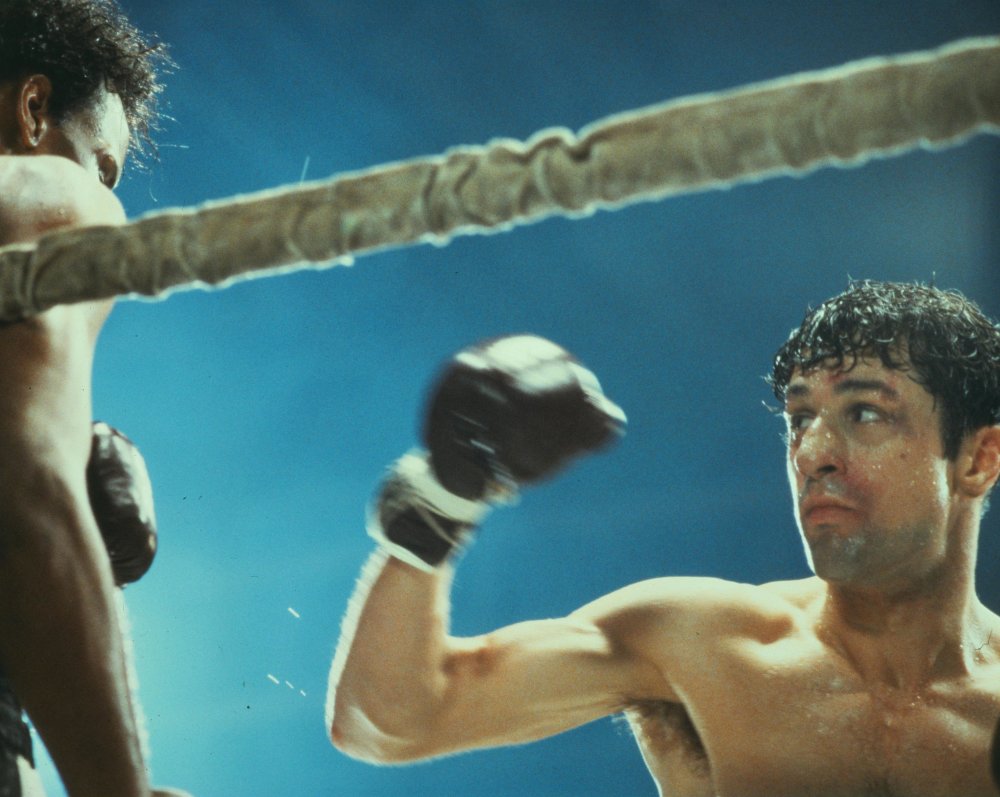 Martin Scorsese proclaimed early on in making his modern classic that he had no interest in boxing, and knew very little about the sport. Instead, he uses the bouts as chapters or bookends in the story of Jake La Motta’s life – as well as indicators of his frustration or masochism. An inexpressive, violent bully, La Motta is brought to life by a seething Robert De Niro, and given an ideal foil in calmer brother Joey (Joe Pesci).

Scorsese beautifully layers his influences – with hints of American boxing classics as well as Italian melodrama like Rocco and His Brothers (1960). It’s true that the Soviet montage style and forlorn strains of Mascagni on the soundtrack offer Raging Bull a certain poetry; but it’s a trip into the psyche of a man consumed by sexual jealousy and inarticulate rage. Essentially, it’s a beautiful film on an ugly subject. Scorsese’s work here isn’t just a masterpiece of sports films, but entirely on its own terms. 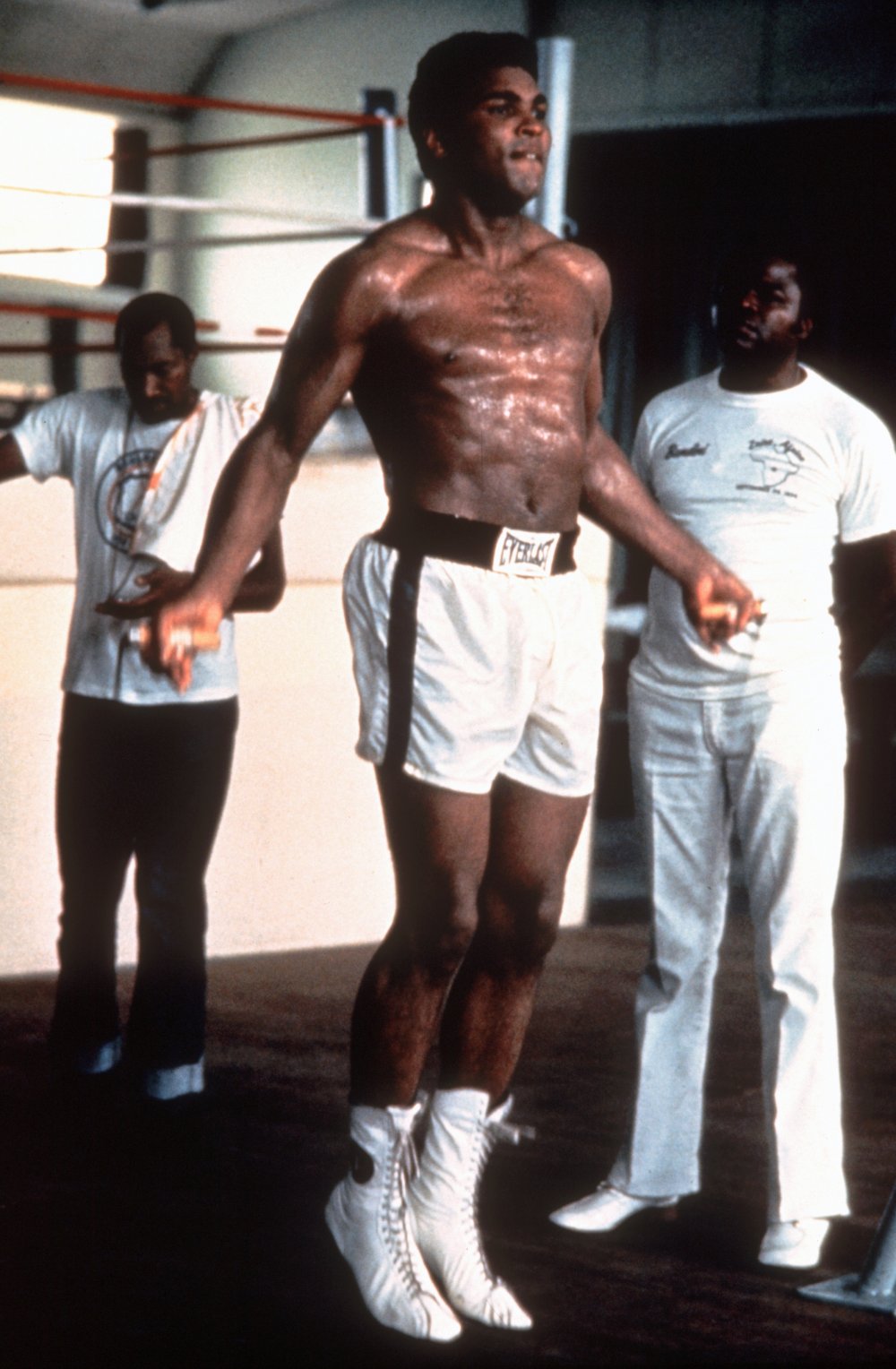 No collection of boxing films could be complete without mention of The Greatest – and while Michael Mann’s 2001 biopic isn’t a bad choice, the fact remains that no one can play Ali quite as well as the man himself. Leon Gast’s documentary offers a collection of footage and subsequent interviews surrounding the lead-up to one of the most famous clashes of all time: The Rumble in the Jungle. Set up in Zaire by the nefarious Don King, Ali might have met his match in the giant George Foreman. He registers little concern – he’s a towering presence on-screen, hilarious and cocky; welcoming schoolchildren to chant, “Ali, boma ye!” (“Kill him!”) everywhere Foreman goes. It’s all intrinsically dramatic and larger-than-life.

Of course, Ali comes back from that punishing rope-a-dope routine, delivering Foreman a blow that lands him on the canvas like a deflated balloon. Few moments in fiction cinema are so thrilling; documentary has rarely felt this alive.

Unforgivable Blackness: The Rise and Fall of Jack Johnson (2004) 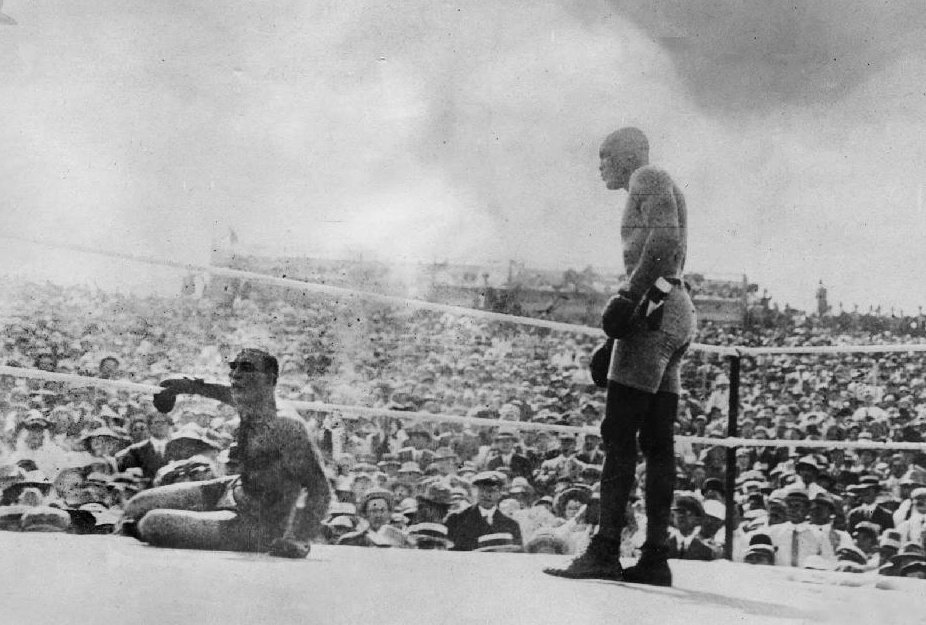 It’s impossible to understand the legacy of race in boxing – and how deeply intertwined the two subjects are – without knowing the story of first-ever black heavyweight champ, Jack Johnson, a man who earned the most important athletic accolade in the world in 1910. Ken Burns’ documentaries are leisurely paced, heavily researched affairs, constituted entirely of archival material. But even with its lengthy running time, Unforgivable Blackness is endlessly engrossing.

Johnson was a defiant figure; he openly flaunted his wealth and dated white women. He was so despised that after his reign, it took 29 years for a black fighter to get another shot at the title. With that in mind, it doesn’t seem an exaggeration to say that to learn about Johnson is, by extension, to learn about America. The picture is not always pretty (of the nation or of the champ), but it’s an unforgettable watch.