Our 10-film tasting menu of some of the most spectacular musicals to come out of India. 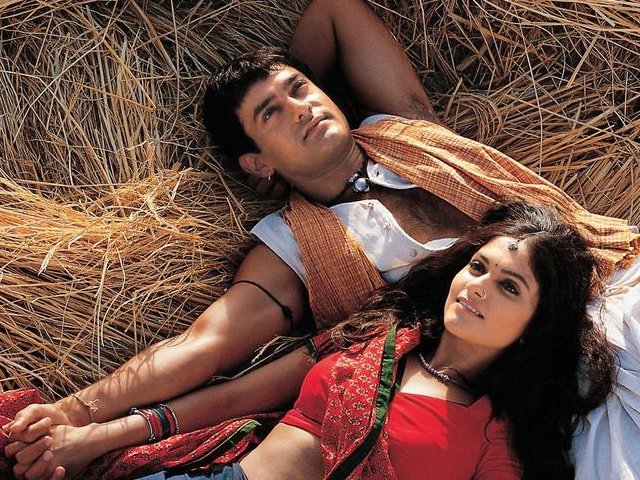 Indian cinema’s relationship with music has always been unshakable. The first Indian talkie to come from one of the Bombay-based studios, soon to be known collectively as Bollywood, was a musical: Alam Ara, directed by Ardeshir Irani in 1931. Now sadly lost, it was advertised as ‘All talking, all singing, all dancing’ and contained seven song sequences, with the track ‘De De Khuda Ke Naam Per’ becoming a national phenomenon.

This early offering of music and movement formed the foundations of the melodic monolith Bollywood would evolve into. As Indian cinema developed, song and dance remained an important feature of its films. The 1940s and 50s were a golden age of Indian filmmaking, with beloved titles such as Andaz (1949) and Mother India (1957) continuing to use music as an important narrative device.

While the musical is a distinct genre in Hollywood, over in Bollywood song and dance find their way into any and all of the other genres. Dhoom (2004), for instance, is an action-packed thriller in the John Woo mold that still manages to squeeze in a few songs, while 2010’s My Name Is Khan is a serious drama starring superstar Shah Rukh Khan as a man navigating life with Asperger’s syndrome yet contained some fantastic tracks.

Unlike in most Hollywood musicals, however, the stars on screen aren’t usually responsible for the singing themselves. Playback singers are the behind-the-scenes heroes and heroines of the industry, singing pre-recorded songs that are then lip-synced by the cast. A number of these singers have become stars in their own right. Playback singer Asha Bhosle is a national treasure responsible for decades of hits and has sung on more than a thousand film scores. She’s adored among the Indian community worldwide, with British indie band Cornershop’s hit ‘Brimful of Asha’ dedicated to her prolific output.

Every Bollywood devotee has their favourites, but here’s a snapshot of 10 classic Mumbai musicals that represent some of the best. 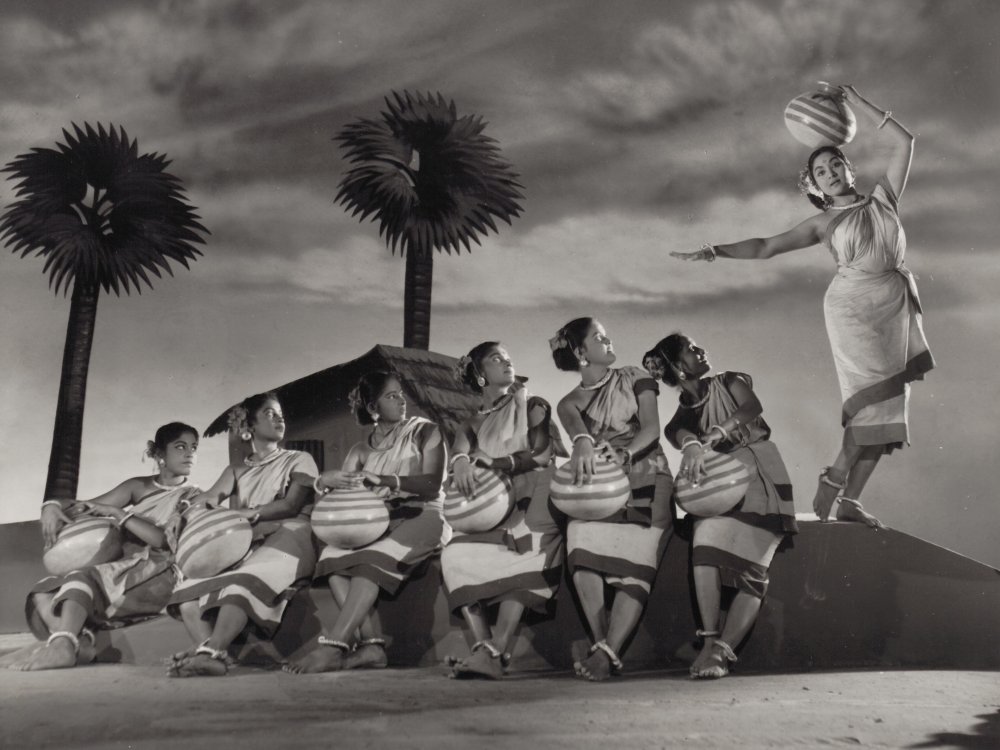 Bimal Roy’s 1958 film Madhumati explores the notion of reincarnation, which is central to Hinduism. The hero, Devinder (Dilip Kumar), accompanied by a close friend, is en route to collect his wife and child from a train station on a wild and stormy day. With his path to the station blocked by a landslide, they take shelter in an old mansion that he begins to find eerily familiar. Before long he’s recalling a past life in which a previous version of himself named Anand had an ill-fated relationship with a beautiful country girl named Madhumati.

Soundtracked by Salil Chowdhury, one of India’s most prolific film composers, Madhumati is a melancholic meditation on previous existence and unrequited love. The song ‘Suhana Safar Aur Yeh Mausam Haseen’ provides a beautiful and haunting aural backdrop as Anand walks through the lush and scenic countryside of the Ghorakhal mountains in northern India. 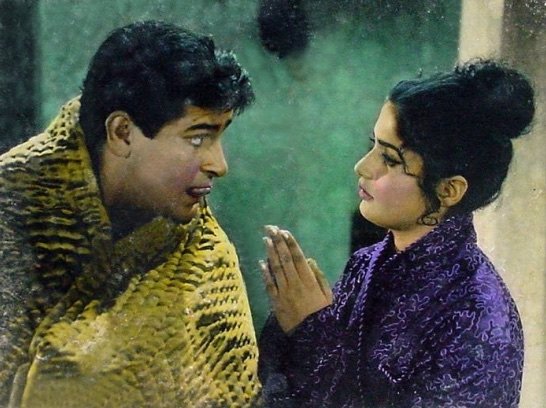 Parental disapproval of unarranged relationships – and how it can (or can’t) be overcome – is a theme that runs through much Bollywood cinema. In Janwar we get a two-for-one taste of heartbreak, with wealthy brothers Mahendra (Rehman) and Sunder (Shammi Kapoor) both falling in love with women from the lower castes.

One of the most famous moments of the film comes with the song ‘Dekho Ab Toh Kisi Ko Nahin Hai Khabar’, which is performed to the borrowed tune of The Beatles’ ‘I Want to Hold Your Hand’ with a twangier, sitar-like guitar sound foreshadowing the Fab Four’s forays into Indian music. Jerking around as if imitating the Beatles’ rival, Mick Jagger, Kapoor’s electrified dancing in this sequence is intended as a lighthearted send-up of the gyratory styles of British and American rock’n’rollers. 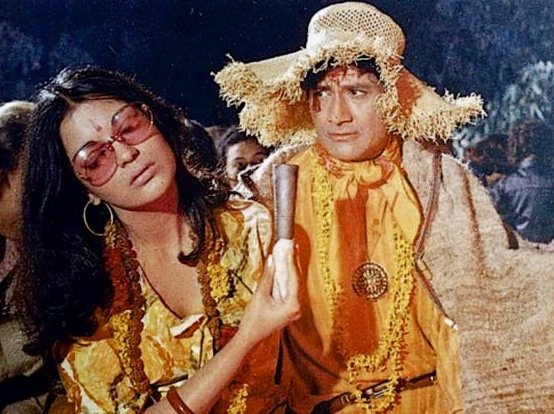 While visiting Kathmandu and observing growing numbers of young westerners on the hazy hippie trail of the 60s, Dev Anand was inspired to write, star and direct Hare Rama Hare Krishna, a feature criticising groovy youngsters who connected Indian philosophy with chemical experimentation. Anand plays Prashant, a pilot who’s been asked by his father to locate his estranged sister Jasbir (Zeenat Aman), who has run away to Nepal, where she’s living within the local countercultural scene.

Between long puffs on hash-filled chillums, Jasbir – now known as Janice – sings one of Bollywood’s biggest hits of the 1970s, ‘Dum Maro Dum’, which translates as ‘take another puff’. Containing a fuzzed-out instrumental track that wouldn’t feel out of place on a Velvet Underground record, her spiritually misguided ode to hedonism was famously sampled years later by Method Man, by reputation one of rap’s biggest weed smokers, on his 2004 track ‘What’s Happenin’’ with Busta Rhymes. 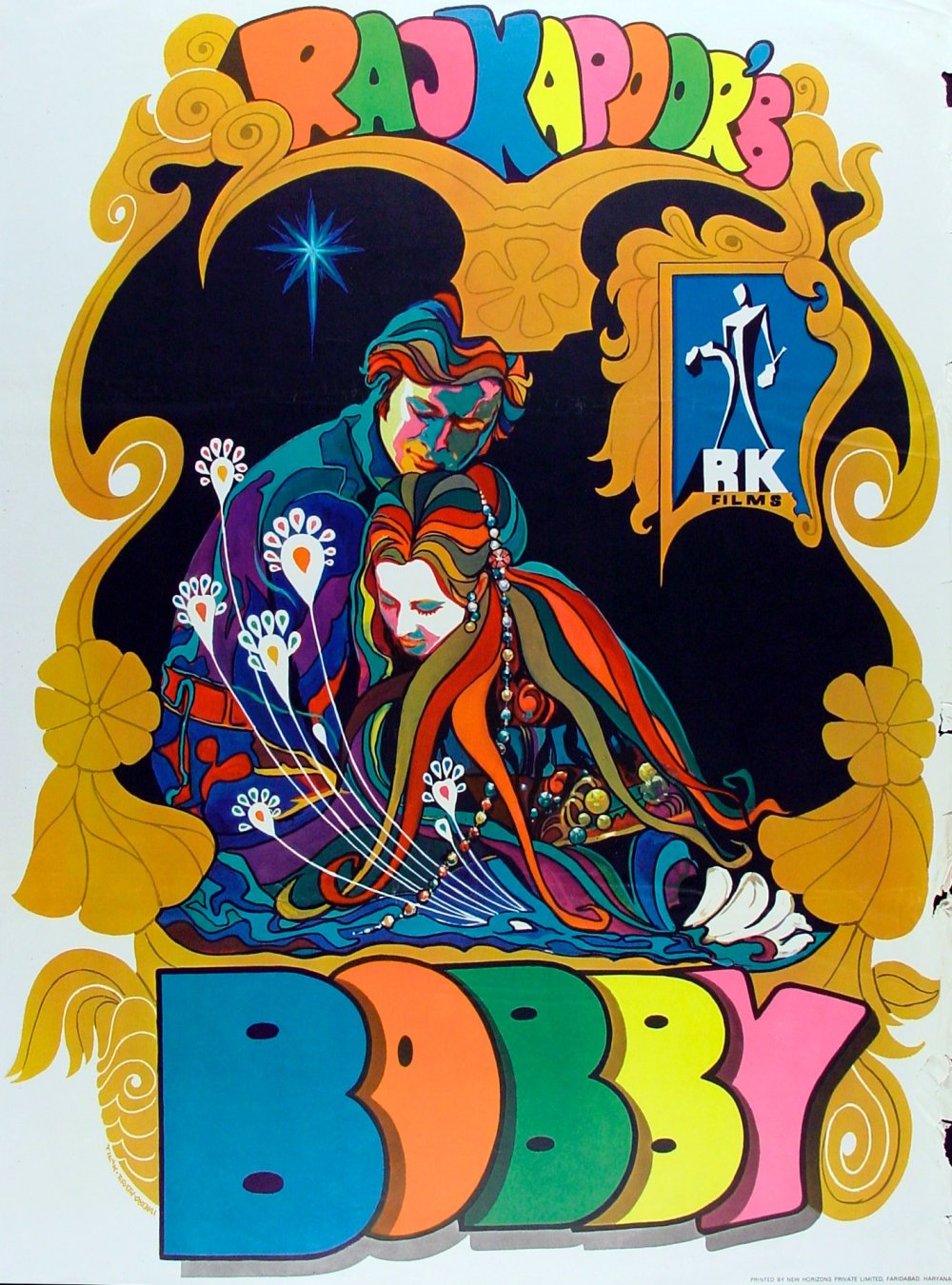 Two of the greatest Bollywood dividers, class and religion, provide the barrier for our hero and heroine in this 1973 feature from Raj Kapoor. Kapoor’s son Rishi plays Raj, a young teenager from a privileged Hindu background who, on his return home from boarding school, falls in love with Bobby (Dimple Kapadia), the daughter of a Christian fisherman. Raj visits Bobby’s father, a jolly, local boozehound. In a beautiful exchange during the song ‘Naa Chahoon Sona Chandi Naa Mangoon’, Raj is given his blessing, with both men singing the line “There’s no bargaining in love.” However, this is naturally shot down in flames by Raj’s parents, who don’t approve of the relationship and want him to marry within his caste. With great emotion and song, the couple have no option but to run away together.

In addition to being one of India’s biggest cinematic hits of the 70s, Bobby also gained huge popularity in the Soviet Union (where Bollywood had more traction than the bourgeois and decadent Hollywood), drawing 63 million admissions. 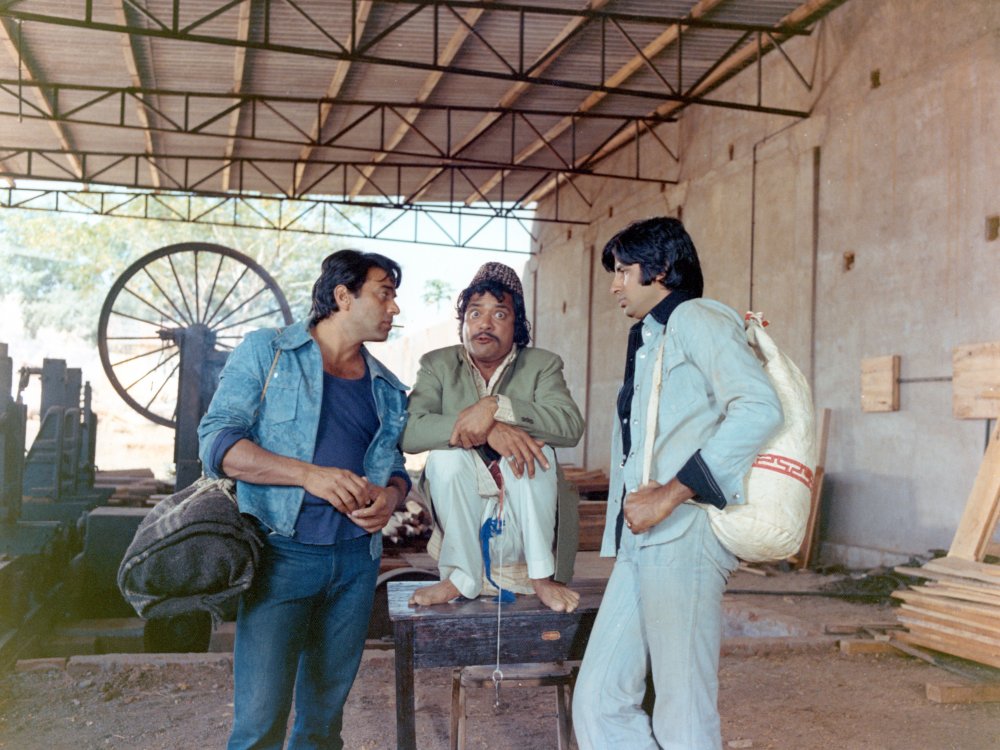 Initially a huge commercial flop, Sholay benefited from word of mouth and repeat screenings to become one of the most popular films in Indian history. It’s a genre-infused mishmash of east and west – think Butch Cassidy and the Sundance Kid (1969) if directed by Sergio Leone with song and dance sequences.

The legendary Bollywood star Amitabh Bachchan and Dharmendra play Jai and Veeru, two small-time thieves who are recruited by Thakur, a retired policeman, to track down Gabbar (Amjad Khan), a vicious bandit terrorising the region. Jai and Veeru’s friendship is cemented through the song ‘Yeh Dosti Hum Nahi Todenge’, delivered as the pair drive through lush countryside together in a motorbike and sidecar. Sholay climaxes with one of Bollywood’s most iconic fight scenes: Thakur finally squares up to Gabbar and kicks him senseless with his spiked shoes. Sholay spawned many imitators, which became nicknamed ‘curry westerns’ by critics. 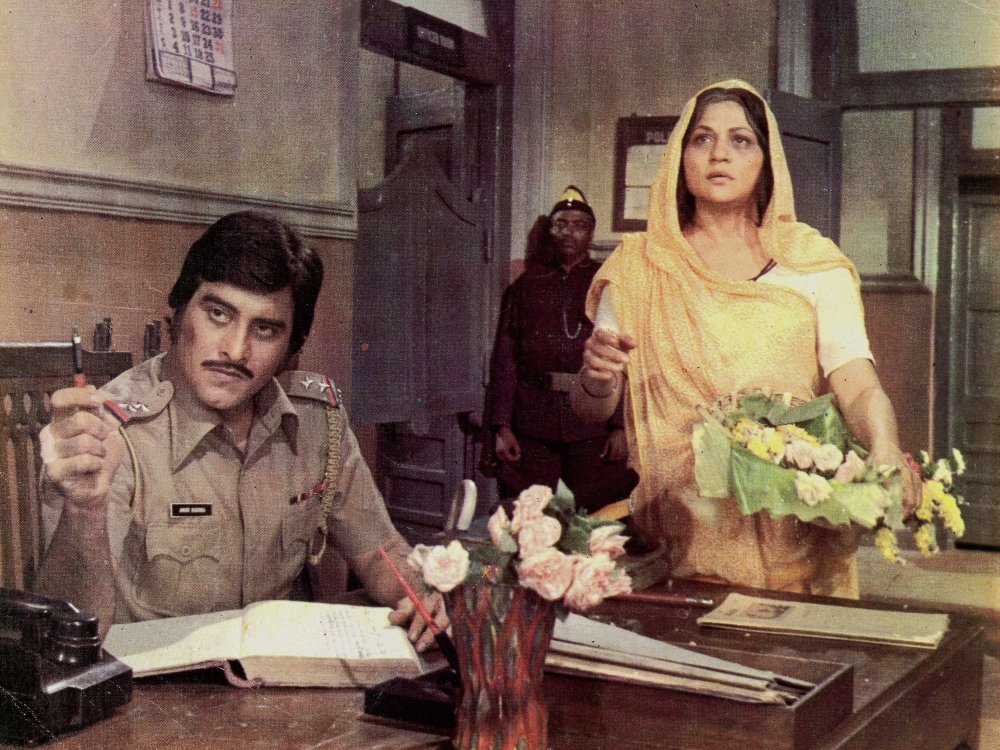 Amar Akbar Anthony is one of the finest examples of a ‘masala film’, a term derived from Indian cuisine (where masala is a blend of spices) to refer to a mishmash of genres, usually romance, action and comedy. The narrative follows three brothers who are dramatically separated from their parents because of a clash with a local gangster. Each brother is adopted by families of different faiths. Amar is raised a Hindu, Akbar a Muslim and Anthony a Christian.

Bollywood powerhouse Amitabh Bachchan takes centre stage in the role of the roguish Anthony. Emerging from a car-sized Easter egg and speaking in a comedic, plummy English accent, Anthony recites near-verbatim sections from a Benjamin Disraeli speech (“you are a sophisticated rhetorician intoxicated with the exuberance of your own verbosity”) before breaking into ‘My Name Is Anthony Gonsalves’ – one of the film’s standout songs. 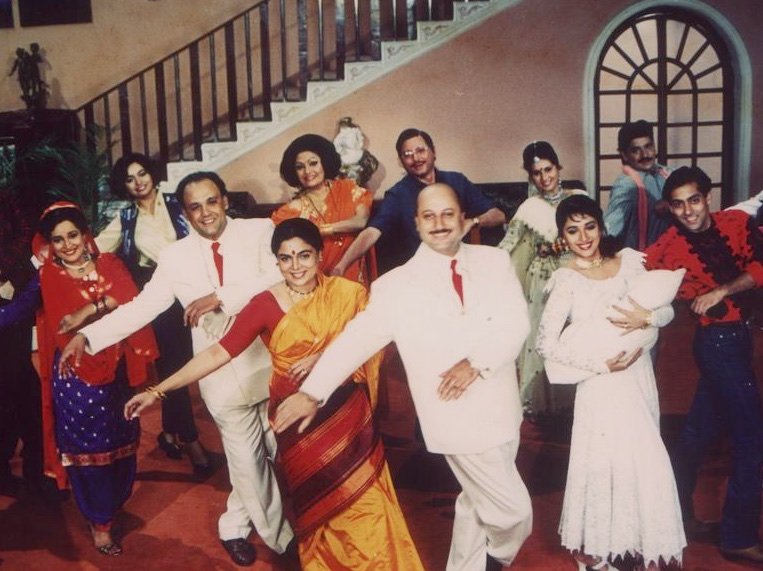 Loosely based on the 1982 film Nadiya Ke Paar, Sooraj Barjatya’s Hum Aapke Hain Koun..! became the highest grossing Indian film of the 1990s. It was the first to take one billion rupees at the box office. Barjatya wanted to move away from the ‘hero and villains’ scenarios depicted in films like Sholay by making a film that gave viewers an insight into the trials and tribulations of upper-middle-class family life, making them “feel as if they have come to visit a big joint family that is preparing for a wedding”.

Containing 14 songs (a lot even by Bollywood standards), the film’s music capitalised on the beautiful voice of veteran playback singer Lata Mangeshkar, who received a Filmfare award for her rendition of the song ‘Didi Tera Devar Deewana’, which translates as ‘Sister, Your Brother in Law Is Crazy’. 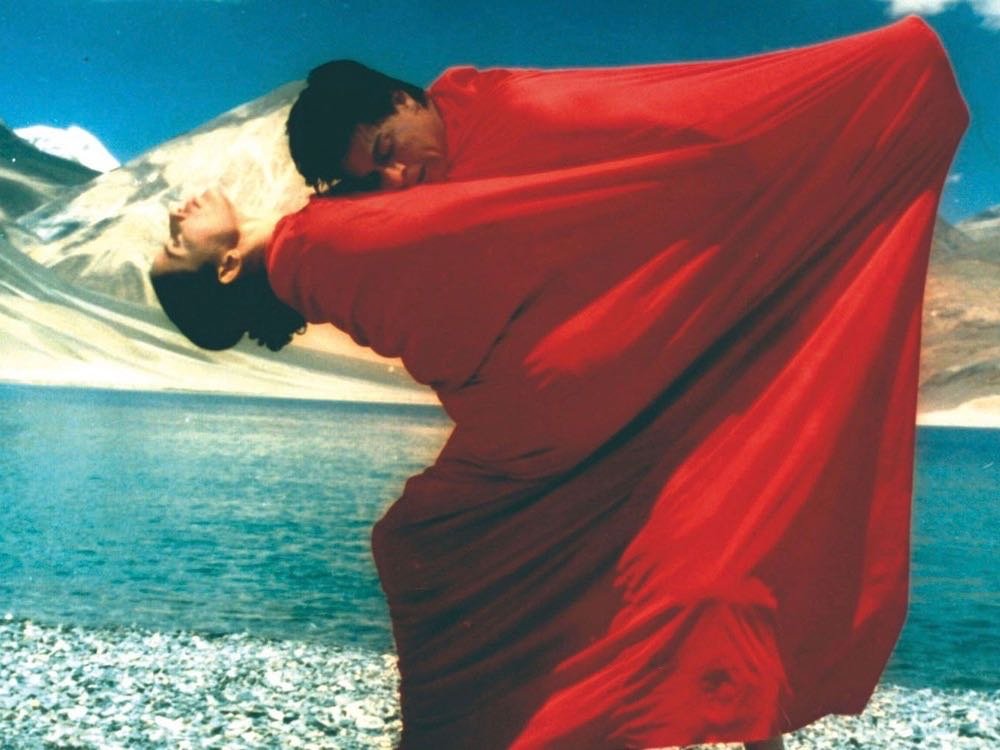 In Dil Se.., Bollywood superstar Shah Rukh Khan plays Amar, a radio reporter dispatched from New Delhi to Assam to work on a story. En route he falls for a beautiful stranger played by Manisha Koirala. Although he’s instantly smitten, she rejects his romantic advances. But when she later turns up at his house, unannounced, he agrees to help her, unaware that she harbours a dangerous secret.

Mani Ratnam’s modern classic contains one of the most complex dance sequences Bollywood has ever delivered: ‘Chaiyya Chaiyya’. Based on a Sufi folk song and taking place on top of a moving train, this performance took four days to choreograph and film. “One of the unit members tripped and hurt himself. Other than that, things were safe,” recalled actor Malaika Arora of a treacherous shoot in which absolutely no photographic trickery or backscreens were used. 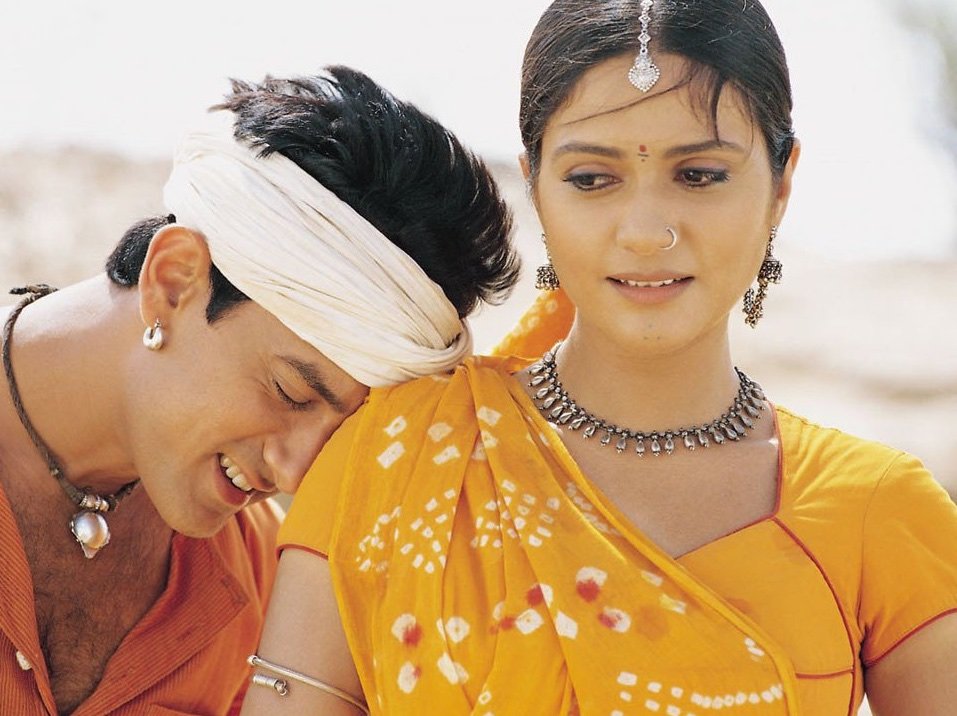 Cricket and colonialism collide in Lagaan, Ashutosh Gowariker’s epic feature from 2001. It’s set in 1893, with India under British rule, when a small village is burdened by a heavy land tax or ‘lagaan’ (tax or fine in Hindi) imposed by the story’s villain, Captain Russell (Paul Blackthorne). When villager Bhuvan (Aamir Khan) stands up to this unfair demand, Russell challenges him to a game of cricket, a sport Bhuvan has never seen before. If Bhuvan and his motley team of locals wins, the tax is scrapped for three years, but if he loses, Russell will triple his charges.

Lagaan is particularly well known for the track ‘Mitwa’, an evocative blend of Sufi folk music with a popular Bollywood sound often known as ‘Sufi rock’. It became the third Indian feature to be nominated for an Academy Award (following 1957’s Mother India and 1988’s Salaam Bombay!). 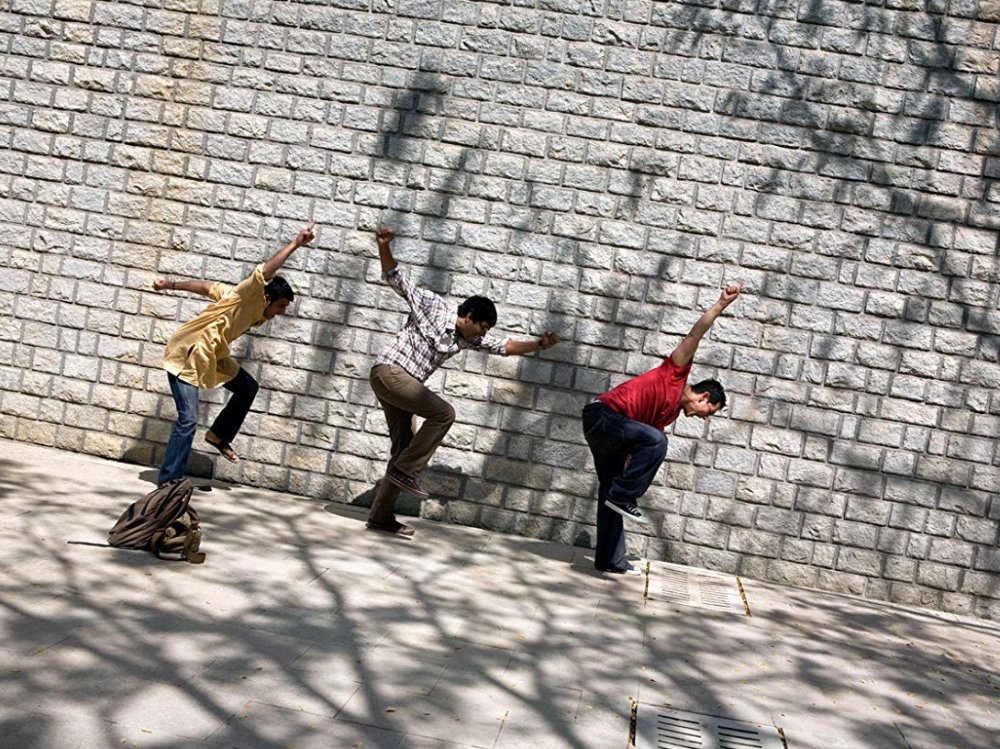 Laagan’s Aamir Khan also appears in this more lighthearted 2009 feature, a popular favourite that’s currently high up in the IMDb’s top 250. Set predominantly on a university campus and borrowing more than a little from the American buddy and college comedy films of the 2000s, 3 Idiots tells the story of three students, Farhan (R. Madhavan), Raju (Sharman Joshi) and Rancho (Khan). The wisecracking, intellectually sharp Rancho mysteriously disappears after their graduation and takes on an almost mythic status for his friends, as they ponder what may have happened to him. Years after university, they begin a search to find him.

The romantically playful ‘Zoobi Doobi’, performed by Khan and Kareena Kapoor, became a huge hit with Indian audiences. The sequence incorporates every kind of homage to the musical, including aerial dance routines, black-and-white footage, synchronised umbrellas and rain-soaked singing – a spectacular nod to the past, present and future of musical Bollywood.