Battleships, submarines and sea warfare are the co-ordinates of this week’s list, in celebration of the London Film Festival Archive Gala screening and nationwide rerelease of one of the great, forgotten British war films. 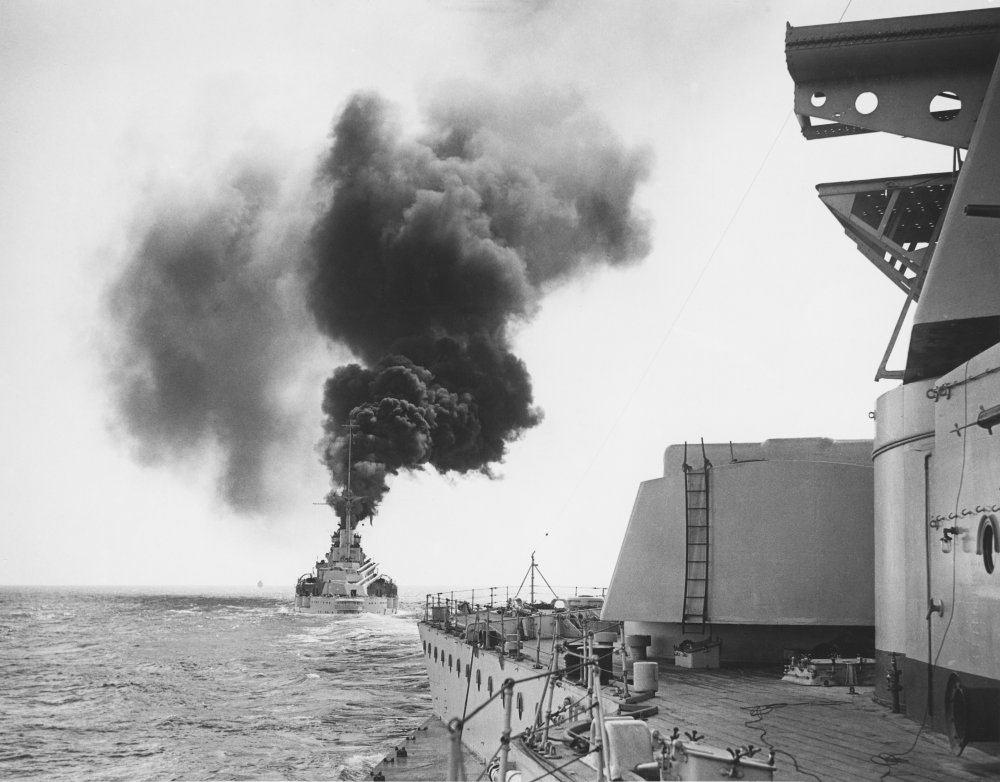 The Battles of Coronel and the Falklands screens on 16 October as the Archive Gala of the 58th BFI London Film Festival before going on general release on 17 October 2014.

As part of our ongoing commemoration of the centenary of the First World War, the BFI National Archive has restored Walter Summers’ 1927 account of two of the most significant maritime encounters of the entire conflict. Complete with a new score performed by the Band of Her Majesty’s Royal Marines, The Battles of Coronel and Falkland Islands completes Summers’ British Instructional Films trilogy, which had started with the Western Front reconstructions, Ypres (1925) and Mons (1926).

The Liverpudlian director had seen action as a sergeant in the trenches, with the second of his three decorations for bravery inspiring the epochal play, Journey’s End, which was written by 9th East Surreys comrade, R.C. Sheriff. But Summers achieved similar levels of authenticity with this ambitious naval undertaking, which was partially produced in response to Unsere Emden (1926), German Louis Ralph’s equitable record of another important 1914 engagement, the Battle of Cocos.

Working from a screenplay by a quartet of writers that included 39 Steps author John Buchan, Summers filmed off the Isles of Scilly with the full co-operation of the Admiralty. Consequently, he was able to invest the action with a scale, immediacy and realism that continued to influence the way in which naval combat pictures were made during and beyond the Second World War.

Some directors had to make do with models in water tanks, but a ring of truth still echoes around all 10 titles in this overview of cinema’s bid to capture the unique perils of war at sea. 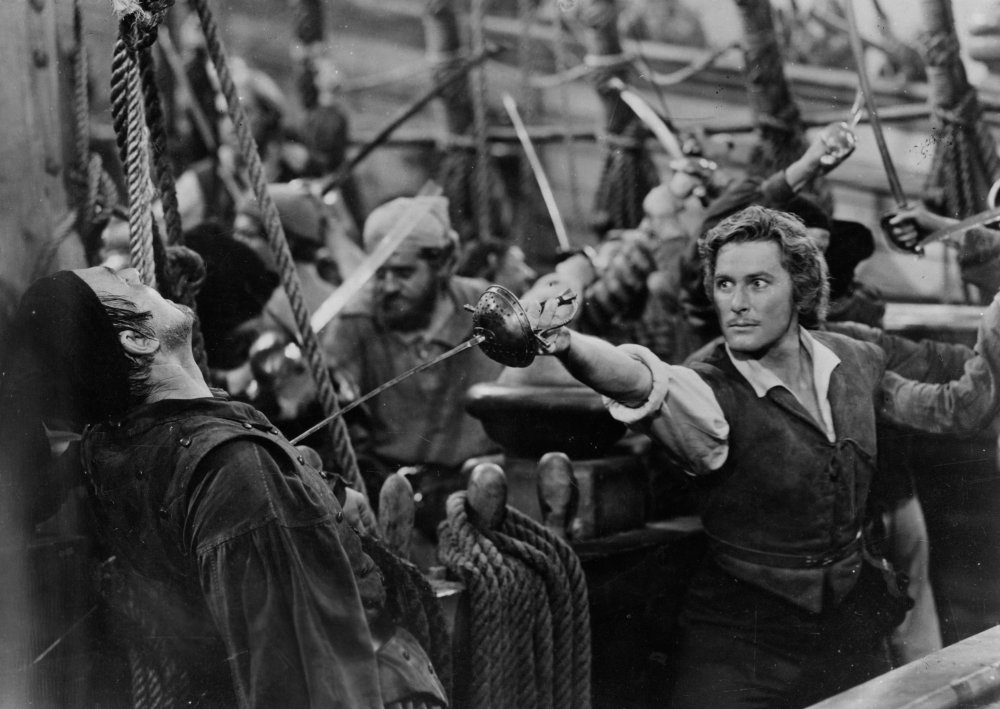 With the United States pursuing a policy of isolationism during the first years of the Second World War, Hollywood was supposed to remain neutral. However, with so many European émigrés in key positions within the studio system, a steady stream of pictures emerged boosting the Allied cause and few would have missed the parallels between Hitler and Philip II of Spain in this rousing adventure inspired by the career of Sir Francis Drake.

As in all his 12 films with Michael Curtiz, Errol Flynn epitomises swashbuckling bravado as the patriotic privateer seeking to confound the Spanish Armada. The battle sequences are designed to thrill rather than capture the realities of 16th-century naval skirmishes. But the anachronisms are as much part of the pleasure of this celebration of subversive heroism as Erich Wolfgang Korngold’s sublime score, Byron Haskin’s creaky special effects and Flora Robson’s “ruthless ambition” speech as Queen Elizabeth, which was supposedly admired by Winston Churchill. 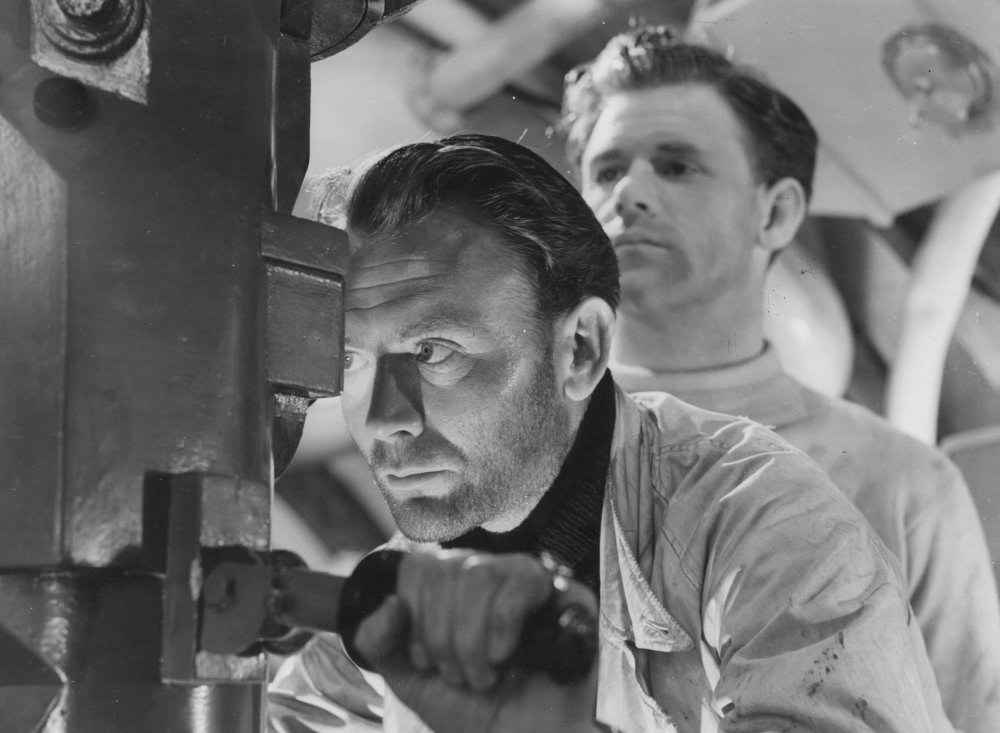 The docu-dramatic style pioneered by Walter Summers in his silent trilogy became a key facet of British films during the Second World War. It was designed to reinforce the gravity of the situation facing the country, while also providing information and inspiration. But combat features also had to entertainment and that’s why the likes of Noël Coward and David Lean’s In Which We Serve (1942) included home front sequences that reminded those in uniform of what they were fighting for and those back home of their duty to the forces overseas.

Unshowily capturing the claustrophobia and camaraderie aboard skipper John Mills’s submarine, Anthony Asquith judiciously blends social-realist soap with nerve-shredding action in this undervalued three-act saga. The central segment, in which HMS Sea Tiger pursues the German battleship Brandenburg across the Baltic, conveys the uncertainties of naval warfare, while the showdown off the Danish coast provides an intriguing insight into tactical ingenuity. Peppered with nautical jargon and played with gritty naturalism, this deserves to be much better known. 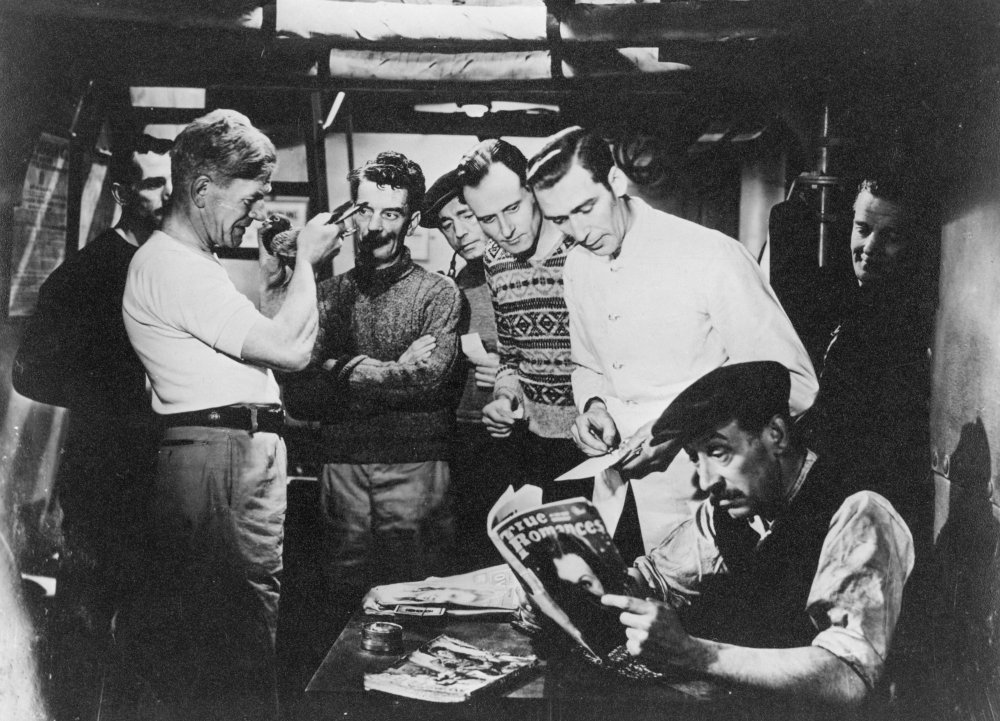 Supply convoys were the lifeline that enabled Britain to stand alone against the Third Reich for over a  year. Yet, while the role played by the merchant navy was rarely extolled in fictional features, Ealing boss Michael Balcon was determined to follow up Pen Tennyson’s Convoy (1940) by relating the true story of MV San Demetrio and hired Chief Engineer Charles Pollard (who is played by Walter Fitzgerald) to serve as a special adviser to director Charles Frend.

The story of lifeboat survivors who decide to rescue the oil tanker they had abandoned following a U-boat attack sounds like Boy’s Own derring-do. But the unforced level of documentary detail employed in depicting the hardships endured by the skeleton crew as they strive to get their stricken vessel back to Blighty reinforces the sense that the common man was every bit as capable of taking command and displaying courage above and beyond as the officer class. 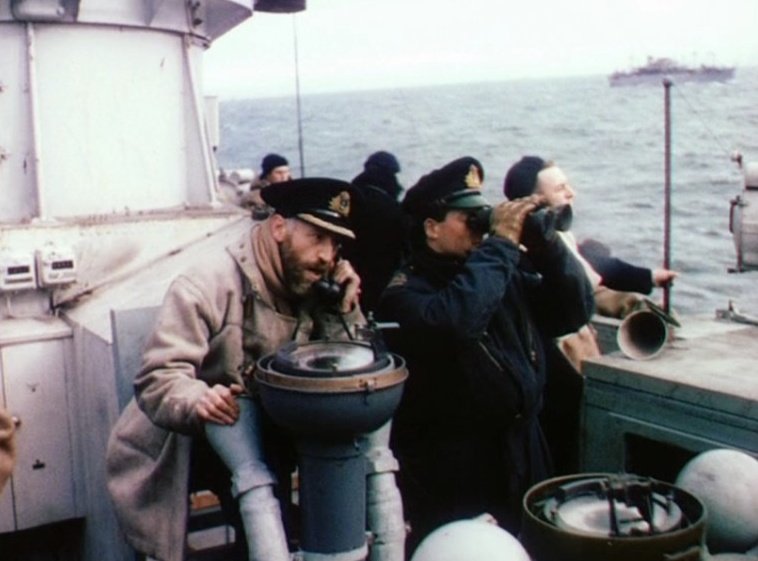 Convinced that monochrome did insufficient justice to the visual and dramatic spectacle of the war in the North Atlantic, the Ministry of Information ordered the Crown Film Unit to use Technicolor for this study of the bond between those sailing under the white and red ensigns. Considering he was shooting on location in appalling weather and occasionally in battle conditions, Jack Cardiff’s imagery is remarkable and brings a palpable sense of immediacy to action whose authenticity is further enhanced by the casting of real seamen rather than professional actors.

But the seascapes also show audiences the vast expanses that Allied shipping had to traverse and the dangers it faced from Nazi wolf packs. Shifting focus between the lifeboat containing survivors from the Jason, the rescue ship Leander and the hovering German U-boat, this is not just a riveting game of cat and mouse, but also a stark reminder of the risks involved in tackling a ruthless enemy. 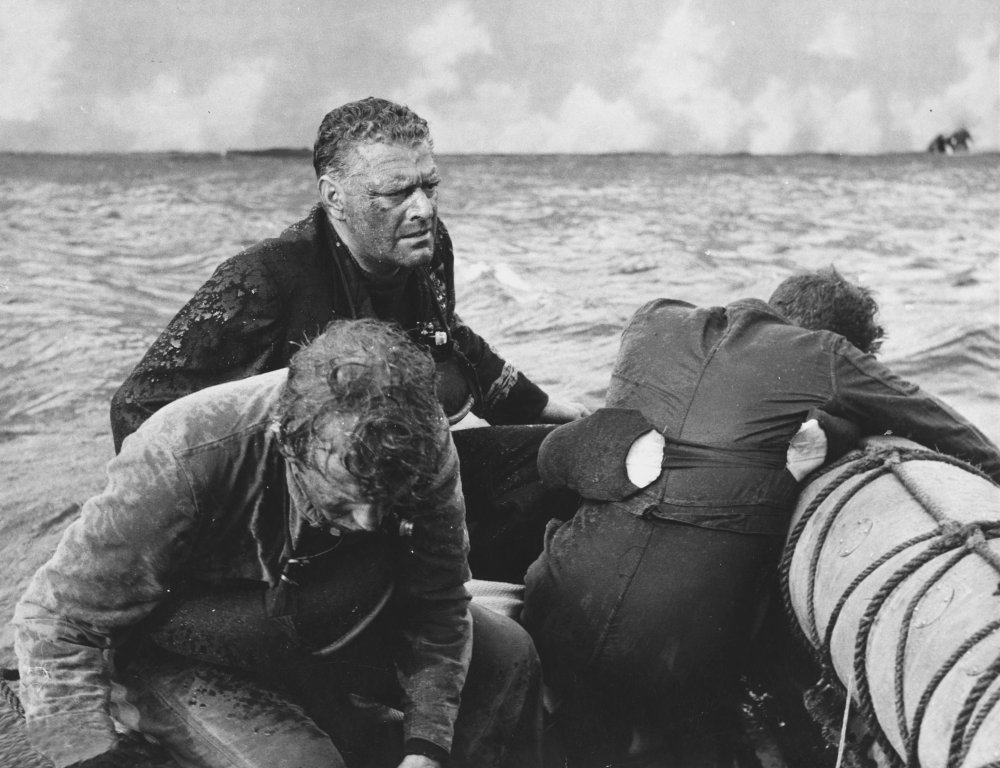 The loneliness of command comes across loud and clear in Ealing’s exceptional adaptation of Nicholas Monsarrat’s bestseller. Exploring the psychological pressure involved in making decisions that would affect the lives of crewmates and countless faceless strangers, Eric Ambler’s screenplay places more emphasis on the human than the heroic. Consequently, few will remain unmoved while watching tears stream down Compass Rose captain Jack Hawkins’s cheeks as he gives the order to drop depth charges knowing that they will kill helpless mariners in the water, as well as knock out the U-boat that sank their craft.

Ambler also recalls the tensions that existed between enlisted men and conscripts, while the training sequences reveal how raw some crews were when they were pitched into action. Donald Sinden, Virginia McKenna and Denholm Elliott were among the newcomers to find fame through the film. But its star was the Coreopsis, the sole surviving wartime corvette, which the producers purchased from the Maltese navy. 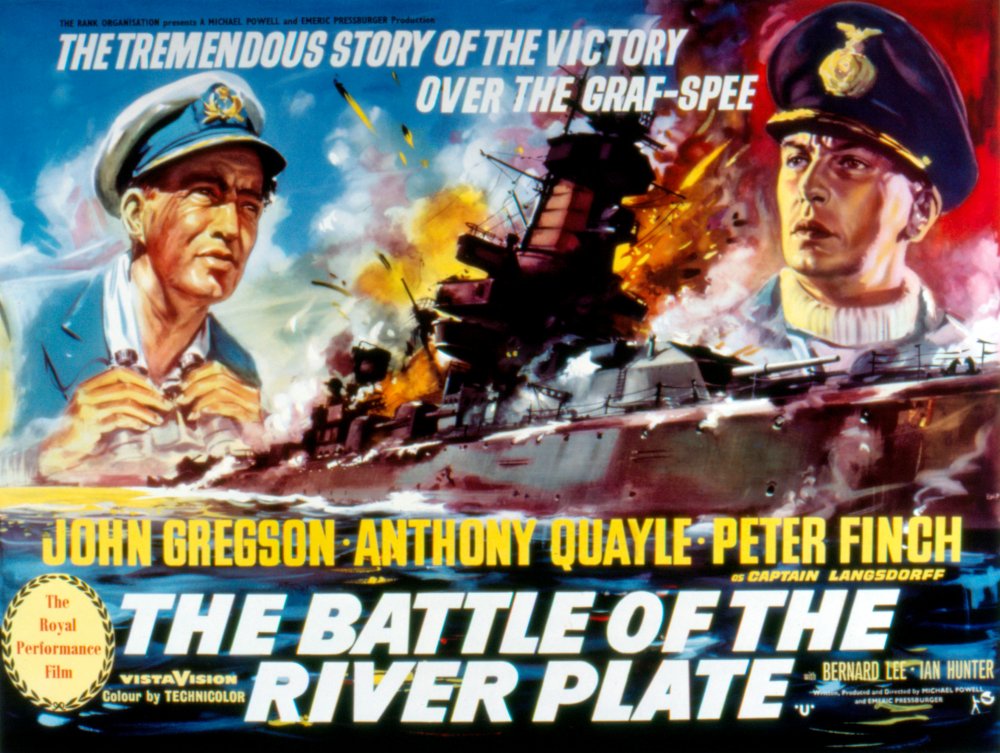 One of the many ‘now it can be told’ pictures produced in the decade after the defeat of the Axis, this has much in common with The Battles of Coronel and Falkland Islands, as the contested waters are again off South America, while the pocket battleship, the Admiral Graf Spee, is named after the victor of Coronel. But the biggest similarity is the mutual respect between the British and German commanders, whose gentlemanly gallantry stands in stark contrast to the conduct of the war in other theatres.

What Michael Powell and Emeric Pressburger don’t reveal, however, is that Captain Hans Langsdorff (Peter Finch) would shoot himself just days after scuttling his ship after being trapped in Montevideo harbour and bidding a fond farewell to former prisoner, Captain Patrick Dove (Bernard Lee). Yet such tragic reality would have compromised the chivalric tone the Archers carried over from their army classic, The Life and Death of Colonel Blimp (1943). 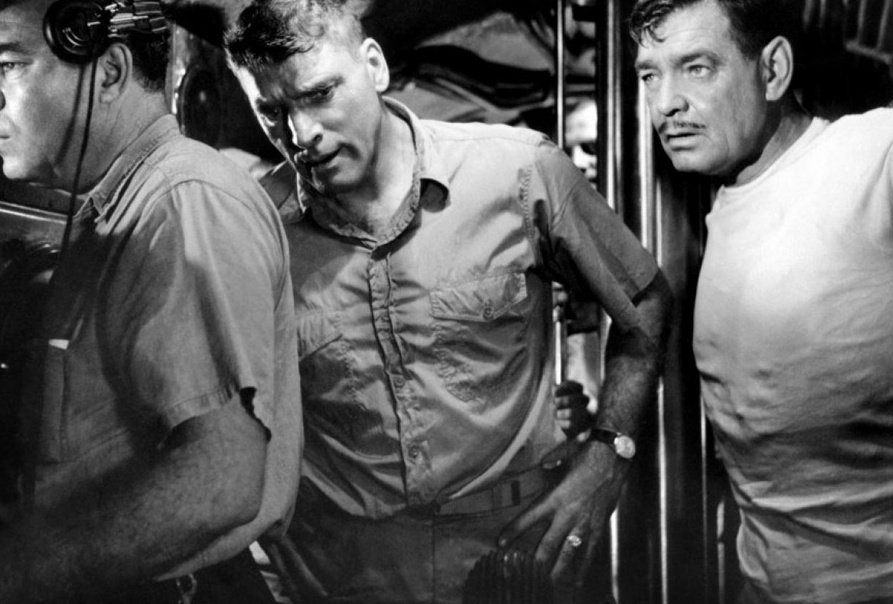 Mental incapacity was a recurring theme in 1950s American naval films, with Humphrey Bogart’s Captain Queeg in Edward Dmytryk’s The Caine Mutiny (1954) and James Cagney’s Captain Morton in John Ford and Mervyn LeRoy’s Mister Roberts (1955) each losing the respect of restless crews eager to do their bit. In these cases, pragmatism is dismissed as an excuse for inaction. But Robert Wise inverts the concept, as he focuses on the Ahabian obsession that drives submarine commander Clark Gable to pursue with increasing recklessness the Japanese destroyer that sank his last vessel.

Edward L. Beach loathed this adaptation of his book, which eventually sees disapproving number two Burt Lancaster take up Gable’s cause after he is wounded. But it’s interesting to compare Gable’s bitter loathing of Japanese counterpart, ‘Bungo Pete’, with escort skipper Robert Mitchum’s courteous treatment of U-boat captain Curt Jürgens after he tricks him into surfacing in Dick Powell’s The Enemy Below (1957). 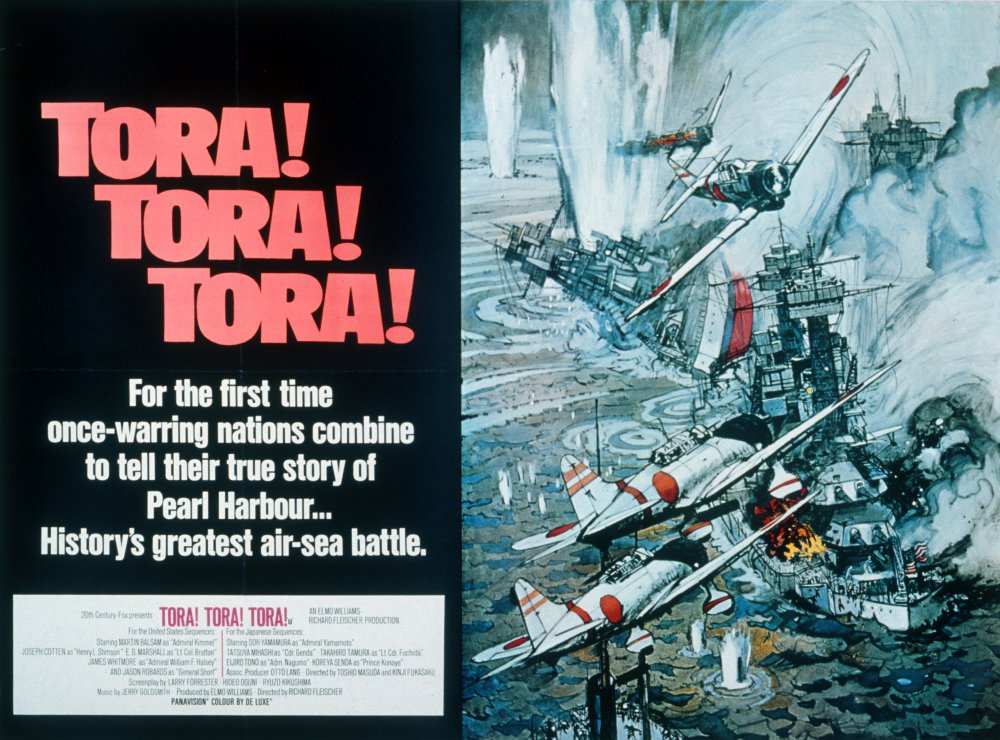 Producer Elmo Williams liked to joke that this $22m recreation of the Japanese assault on Pearl Harbor cost more than the real thing. It would have been more expensive still had Akira Kurosawa been allowed to film his 400-page scenario. But he was replaced for the Japanese sequences by yakuza specialists Kinji Fukasaku and Toshio Masuda, while Richard Fleischer supervised the meticulously researched and authentically reconstructed raid.

The emphasis for much of the picture is placed on strategic planning, duplicitous diplomacy, flawed intelligence and missed messages. But, once the first planes fly unopposed over Hawaii, the speed, scale and precision of the attack is brilliantly recreated, with chilling details like the American sailors jumping into burning oil on the ocean surface bringing home the grim savagery of war. The design, effects, photography and editing are impeccable. Yet, while this fine film struggled to break even, Michael Bay’s vastly inferior Pearl Harbor (2001) grossed $450m worldwide. 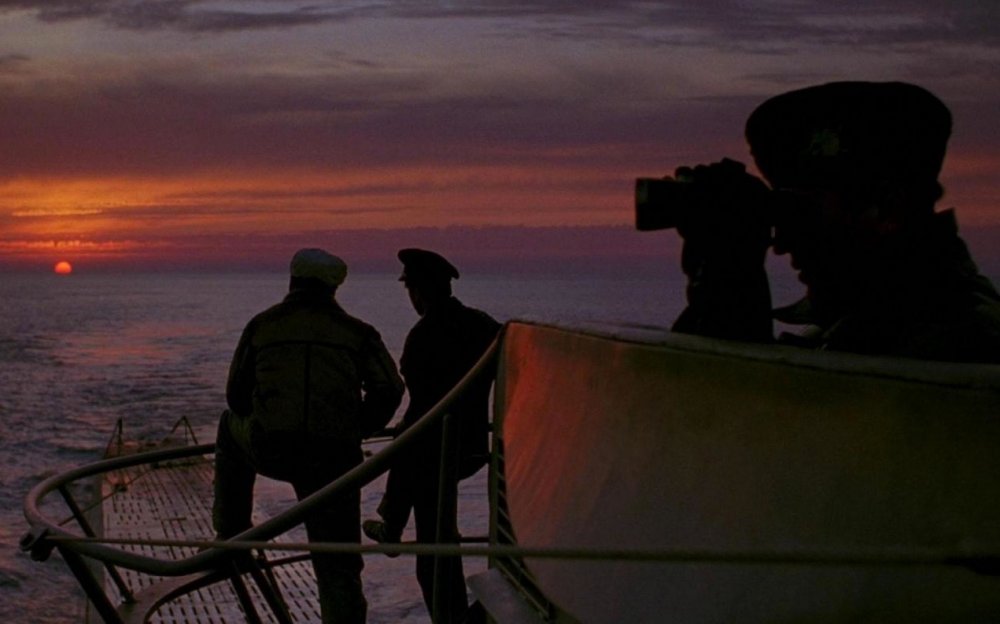 Half a century after Gustav Ucicky revealed the vulnerability of submariners in the Nazi-approved Morgenrot (1933), Wolfgang Petersen reminded German audiences of the perils faced by U-boat crews in his epic adaptation of war correspondent Lothar-Günther Buchheim’s 1973 mémoire à clef. There are two versions each of the theatrical release and the TV mini-series. But what pervades them all is the daunting sense of claustrophobia that gnaws at the crewmates as they endure the long hours of stultifying tedium while awaiting the inescapable terrors of combat.

Jürgen Prochnow excels as Captain Henrich Lehmann-Willenbrock (who served as a consultant), while Rolf Zehetbauer’s production design, Jost Vacano’s handheld photography and Mike Le Mare’s immersive sound work (which received two of the film’s six Oscar nominations) expertly convey the cramped conditions and their psychological ramifications on the largely inexperienced recruits. But it’s Petersen’s control that makes U-96’s patrol of the Strait of Gibraltar so gripping, visceral and indelible.

Master and Commander: The Far Side of the World (2003) 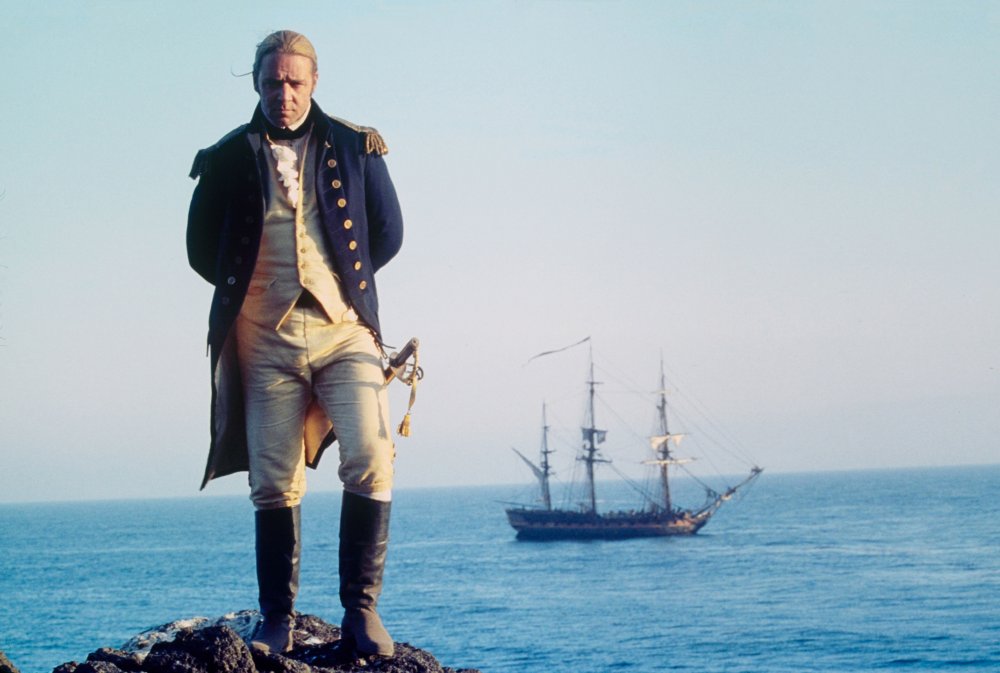 Master and Commander: The Far Side of the World (2003)

Several of Patrick O’Brian’s 20 Aubrey-Maturin novels were plundered for Peter Weir’s historical epic, which could stand as the dictionary definition of the phrase ‘rattling good yarn’. Switching the action from the 1812 Anglo-American contretemps to the Napoleonic wars in the year of Trafalgar, Weir plays down the period’s political complexities. But he nails the hazards of being under sail on a man o’ war and, even if the location and tank work are supplemented by models and CGI, the tussle along the South American coastline between HMS Surprise and the French privateer, the Acheron, makes for transporting viewing.

The story revolves around the friendship between Captain Jack Aubrey (Russell Crowe) and surgeon-naturalist Stephen Maturin (Paul Bettany). But the sense of a shipboard community, with all its rituals and superstitions, is as admirably conveyed as the ferocity of the fighting, with the sounds made by the shrieking ordnance, splintering wood and maimed mariners being Oscar-worthily bloodcurdling.