Journey into old Australia with these brutal tales of outback outlaws. 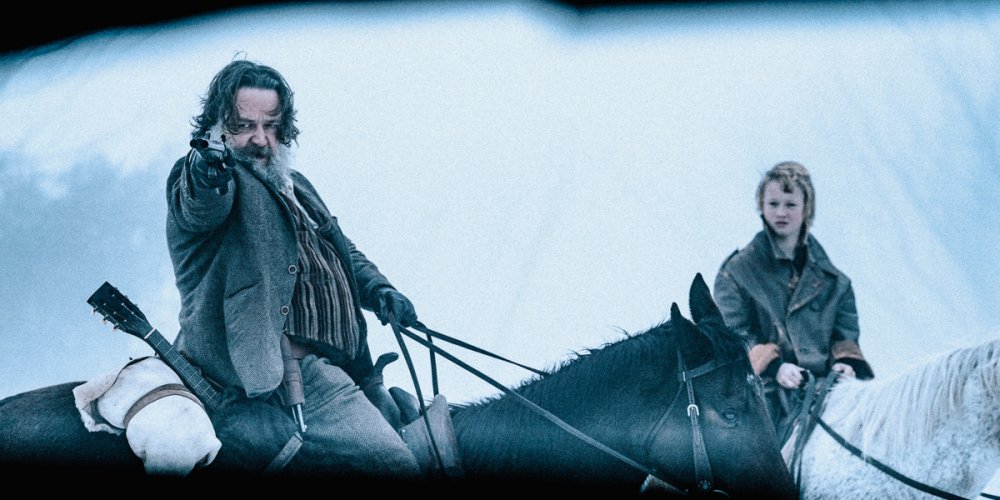 Director Justin Kurzel’s True History of the Kelly Gang (2019) represents a bold revisioning of one of Australia’s most famous myths – the story of bushranger Ned Kelly. Based on the Booker prize winning novel of the same name by Peter Carey, it presents the criminal (played by British actor George MacKay) as a brutalised man out for revenge, casting the violent narrative in a queer, punk aesthetic, epitomised by the film’s marketing images, showing a pistol-wielding Kelly clad in a bloodstained dress.

Not only is Kelly Australia’s most famous bushranger – the name given to convicts who had escaped and survived Australia’s harsh environment to become outlaws – his legend forms a mini industry in film and television. In addition to Kurzel’s, Kelly has been the subject of eight films. The earliest of these – Charles Tait’s 70-minute The Story of the Kelly Gang (1906) – is now recognised as the world’s first feature film. He was played by Rolling Stones frontman Mick Jagger in the 1970 British film Ned Kelly, and by Heath Ledger in a 2003 Australian production of the same name.

These Kelly films form part of a larger body of outback westerns. Early films depicting bushrangers were so popular in late 19th and early 20th century Australia that authorities in several states, fearful of their anti-authoritarian content, banned them. The laws, made in the 1910s, remained in place until the 1940s, effectively crippling the nation’s nascent film industry.

Like the finest American westerns, more recent Australian examples of the genre have focused on re-examining a romanticised past – in Australia’s case, the country’s brutal convict origins and white settlers’ violent dispossession of Indigenous people. Here are 10 of the best. 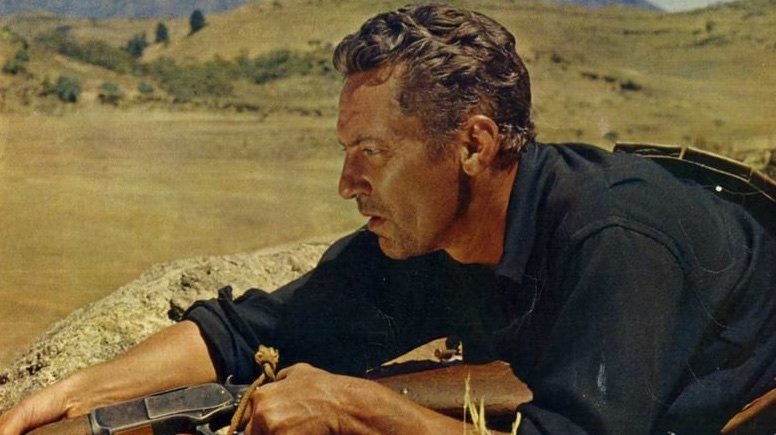 Rolf Boldrewood’s novel Robbery under Arms, first published in 1889, is the fictional tale of the exploits of a renegade English nobleman, known as Captain Starlight, on the Australian goldfields in the 1880s. It’s been filmed six times, with the first sound and colour version made for Rank Organisation by Jack Lee in 1957.

Lee’s film took the novel’s complex plot and turned it into the story of two brothers – Starlight’s sons – who are drawn into a life of crime when they join their father’s gang. The mainly British cast, headlined by Peter Finch as Starlight, speaks to the time when Australia had no film industry and was only one year into the introduction of local television. Nonetheless, the cinematography by Harry Waxman, whose lengthy film credits include The Wicker Man (1973), looks crisp and imparts a real sense of the isolation of early white settler life. The film also tackles what would become a key feature of many Australian westerns: the vital role of Indigenous people as trackers, both for bushrangers and the authorities. 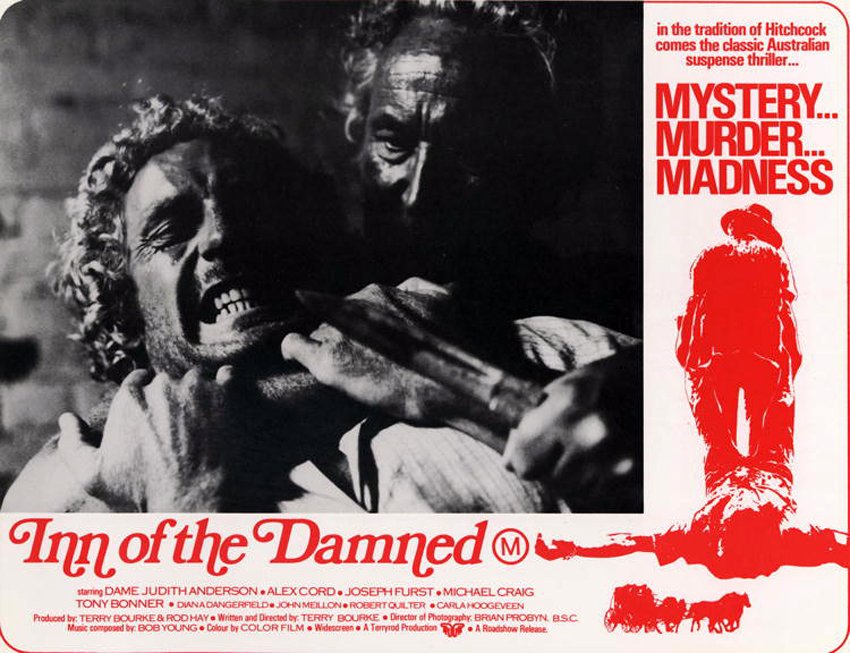 The cycle of Australian films known as Ozploitation boasts a number of westerns, including the rather shambolic Mad Dog Morgan (1976), starring Dennis Hopper, and the little-known Raw Deal (1977), an action film about bounty hunters hired to eliminate a gang of Irish revolutionaries active in the Victorian goldfields. It also includes this 1975 horror western, Inn of the Damned, written, produced and directed by Terry Bourke, Australia’s earliest big screen horror director.

A couple driven mad by the death of their child many years earlier run a remote bush inn, where they slaughter passing travellers with the help of booby-trapped bed. They are undone when one of their victims, a bushranger, is also being pursued by the police and a tough American bounty hunter (American action star Alex Cord). The film effectively fuses the bushranger genre with horror and sexploitation themes. 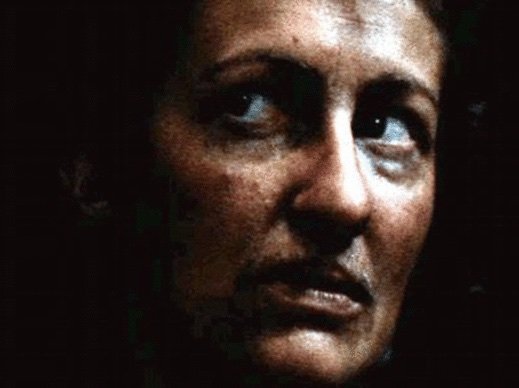 Set in 18th-century Australia, Journey among Women sees the daughter of a well-to-do judge, engaged to a local army commander, running away with a group of escaped female convicts. They establish a women-only society in the bush on the outskirts of Sydney and defend it against both escaped predatory male convicts and the colonial authorities who are trying to recapture them.

Apparently based on a true story, the production was by all accounts a turbulent process. The cast – all amateurs except for Nell Campbell, who had just starred as Columbia in The Rocky Horror Picture Show (1975) – included feminists who strongly disagreed with the choice of director, Tom Cowan, and his vision for the film. Confusing and hard to categorise, the results exhibit aspects of documentary, agitprop, Ozploitation and arthouse cinema. Regardless of the political intentions of the director and cast, its blend of violence, female nudity and lesbianism saw it become a hit with drive-in audiences.

The Chant of Jimmie Blacksmith (1978) 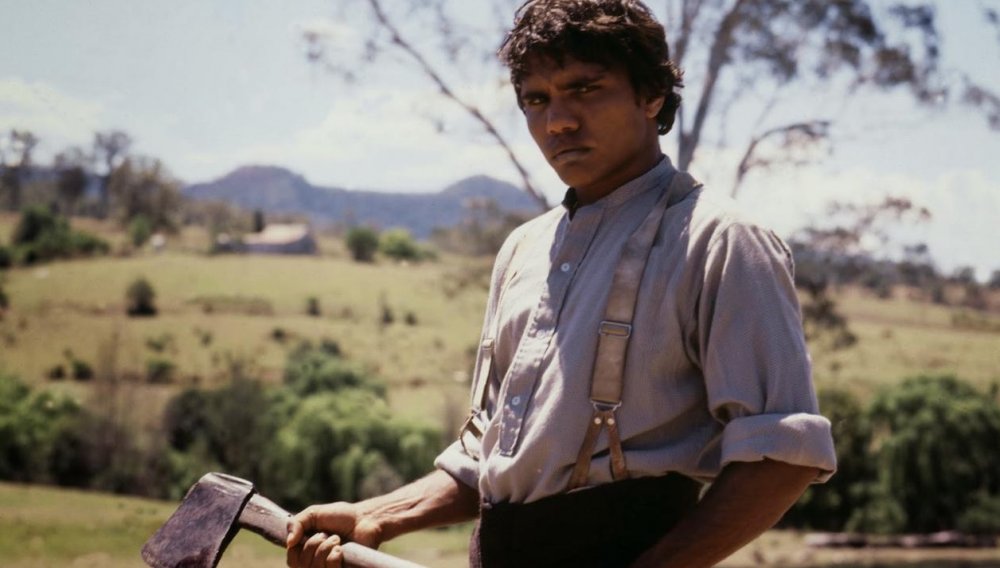 The Chant of Jimmie Blacksmith is considered a key entry in the revival of Australian filmmaking in the 1970s, and rightly so. Directed by Fred Schepisi, who also penned the script based on the novel by local author Thomas Keneally (who would later write Schindler’s List), it’s a harrowing tale of a mixed-race Indigenous man (the debut performance of actor Tommy Lewis) who tries to make his way in white society and is cheated and abused by virtually every person he meets. One indignity too many leads Jimmie and his uncle to murder several white women and go on the run.

The film’s depiction of the way in which Jimmie’s hopes for a better life, and his well-meaning nature, are frustrated and ultimately demolished by racist settler society, resulting in an explosion of unpremeditated violence, still packs considerable emotional punch. Interestingly, the film was seized and confiscated in the UK during the video nasty panic in the early 1980s. 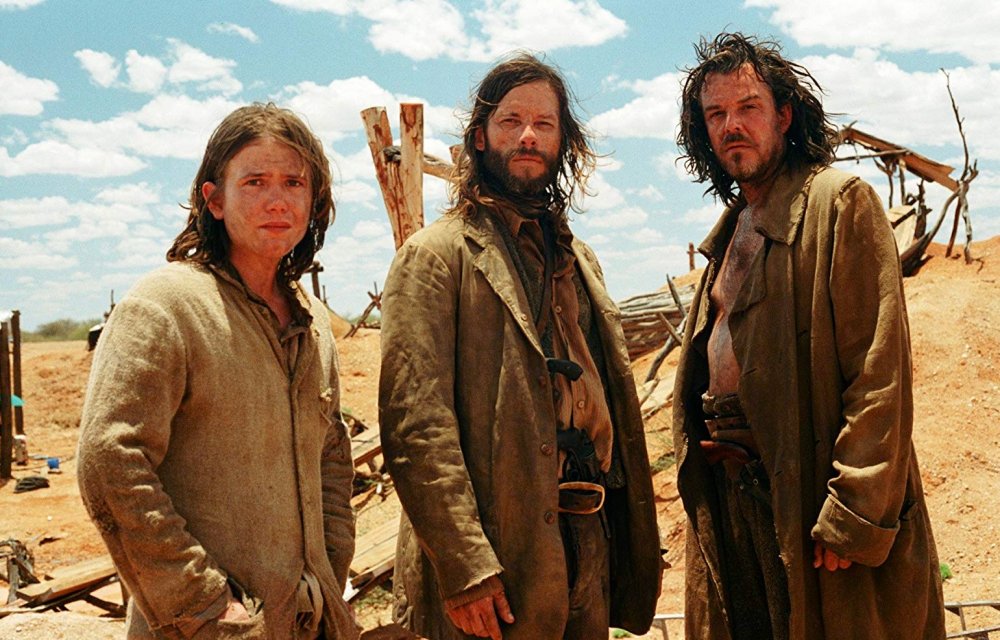 Charlie Burns (Guy Pierce) is the world-weary middle member of a trio of criminal brothers who have been terrorising the 1880s outback. When Charlie and his younger brother, Mike, are apprehended, police captain Stanley (Ray Winstone) makes him a proposition: find and kill his psychopathic older brother, Arthur (Danny Huston), who is still on the run, or see Mike hang.

The Proposition is everything one would expect from the cinematic coupling of John Hillcoat – whose directing credits include the 2009 film adaption of Cormac McCarthy’s The Road and the bleak prison drama Ghosts of the Civil Dead (1988) – and singer Nick Cave, who penned the script. A visceral gothic shoot ’em up, populated by a cast of nightmarish characters, the film is effective but at times feels overwrought – not least the plotline involving Stanley’s determination to wipe out the Irish Burns gang as a part of futile effort to ‘civilise’ the sun-blasted outback and make it safe for his delicate English wife (Emily Watson). 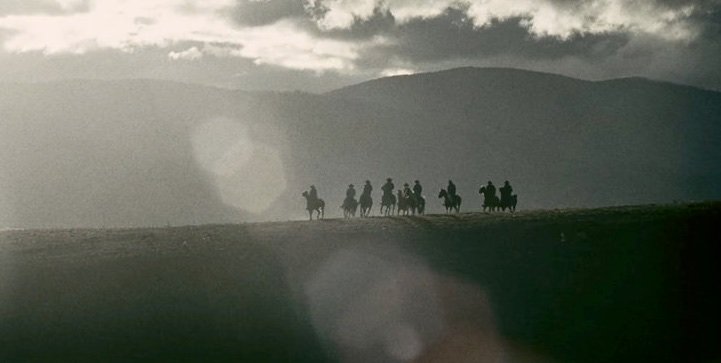 Patrick Hughes’ debut film transplants to modern-day Australia the well-worn trope of the lone man who is the victim of a criminal injustice and returns for revenge. A young police officer (True Blood’s Ryan Kwanten) and his pregnant wife (Claire van der Boom) move to the dying country town of Red Hill. On the cusp of a major storm, word comes through that local man Jimmy Conway (The Chant of Jimmie Blacksmith’s Tommy Lewis), in jail for the murder of his wife and the attempted killing of a policeman, has escaped and is heading to Red Hill. The sheriff (veteran Australian actor Steve Bisley) readies the town’s defences but appears to have more at stake than just protecting the local citizens.

A fast-paced action film that’s as predictable as it is enjoyable, Red Hill makes the most of its location, around the Victorian alpine town of Omeo. It also has a great part-Morricone, part-Australian pub rock soundtrack. 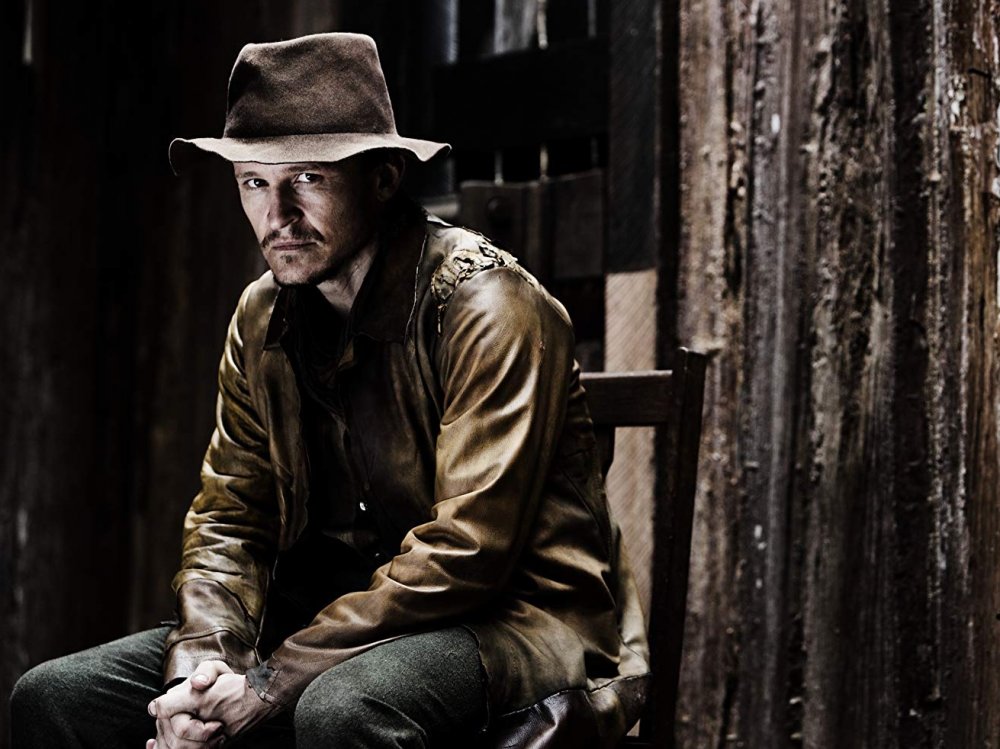 This made for television film is based on the real-life story of British convict turned bushranger Michael Howe, active in early 19th-century Van Diemen’s Land, as the island of Tasmania was then known. Howe helped lead a criminal gang that was so successful that the local governor declared martial law in an effort to suppress them. Colonial authorities were also threatened by Howe taking an Indigenous woman as a lover, with the potential this had for encouraging a dangerous alliance between dispossessed blacks and whites.

The film boasts good performances by Damon Herriman – who will be familiar to international audiences from his recent turn as Charles Manson in Quentin Tarantino’s Once upon a Time… in Hollywood (2019) – as Howe, and Rarriwuy Hick as his lover, whose local knowledge of the land is vital to the gang’s survival. Actor Brendan Cowell’s directorial debut, the film adeptly depicts the tragic relationship between white settlers and the island’s original Indigenous inhabitants, complemented by beautiful cinematography by Simon Harding. 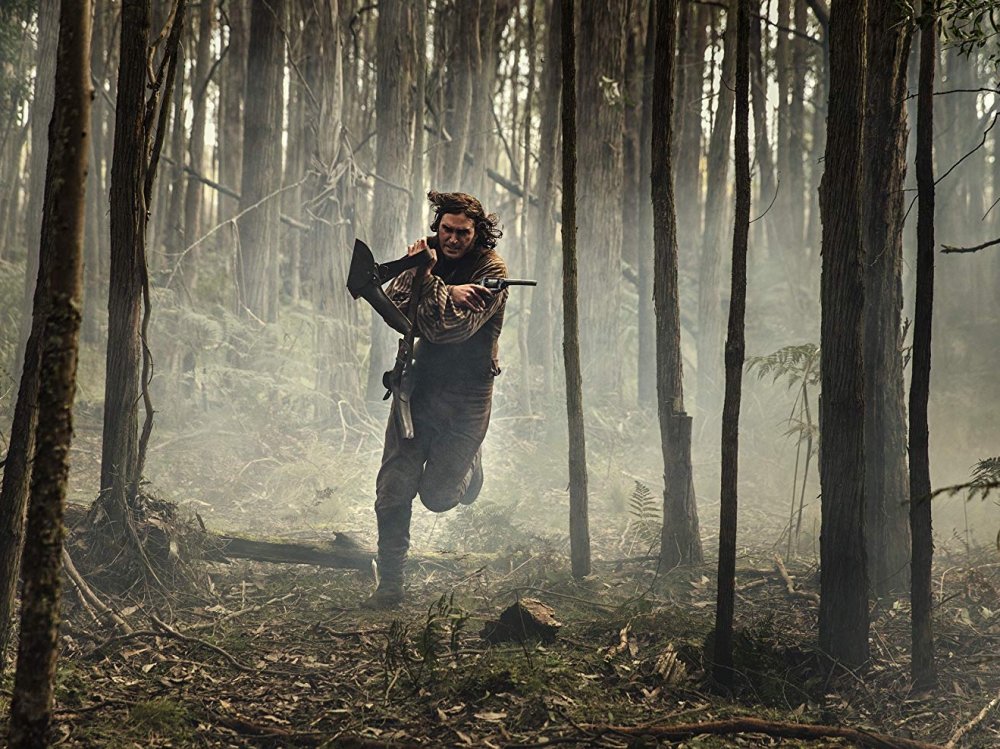 Australian director Matthew Holmes depicts real life 19th-century bushranger Ben Hall (Jack Martin) as an essentially decent man pushed into a life of crime by brutal colonial authorities. The story deals with the final stages of Hall’s criminal career up to his death at the hands of police in 1865. Narrowly escaping a police ambush, Hall hatches a plan to go to America, in the midst of its own gold rush. Working with a flamboyant, hot-headed Canadian, Gilbert (Jamie Coffa), and an inexperienced younger man, Lee (John Dunn) – the lens through which the audience see just how tough the life of a bushranger is – the trio stage a series of robberies to raise funds for their escape, as the police close in on them.

The Legend of Ben Hall is a fascinating Australian take on the revisionist US western’s trope of the bandit who knows the world is changing around him but can’t escape his old ways. 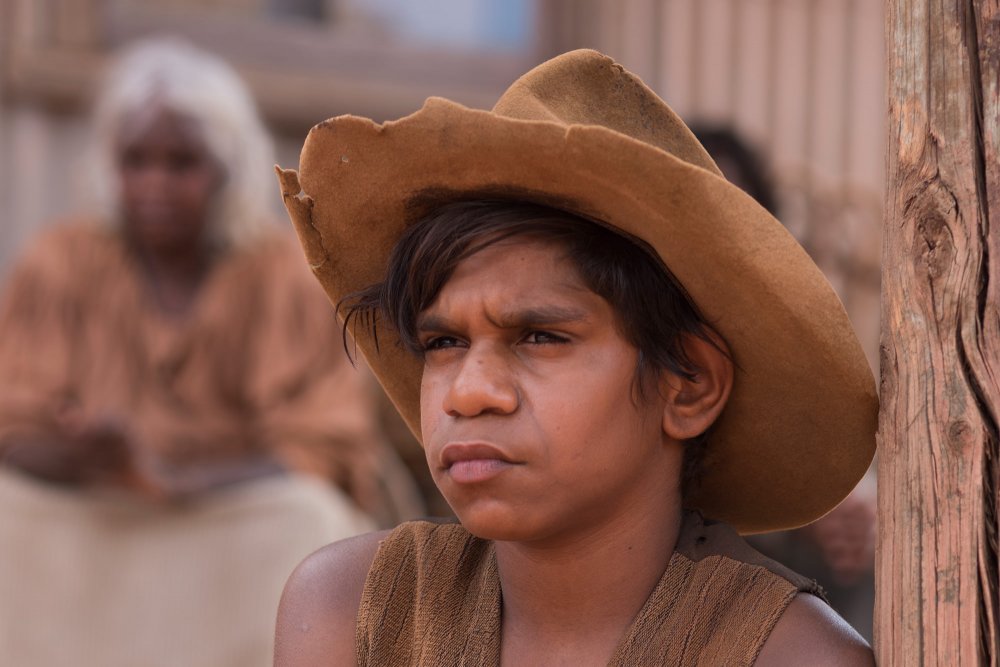 In 1920s outback Northern Territory, an Indigenous man, Sam (Hamilton Morris), works for a well-meaning but naive religious farmer (Sam Neill). When a new neighbour, a returned First World War soldier, rapes Sam’s wife and threatens to kill him, Sam kills the man in self-defence. Fleeing with his wife, he’s closely pursued by a posse headed by the local head of police (a very grizzled Bryan Brown).

Director Warwick Thornton’s first film, Samson and Delilah (2009), about a young Indigenous couple who flee their remote government-controlled community for what they hope will be a better life in the city, displayed a light touch that belied the complex themes. Sweet Country is the same. Not a lot is said by any of the characters, and parts of the film have a dream-like feel. But it packs a lot in, including a nuanced and layered take on white Australia’s horrific treatment of Indigenous people, their sexual exploitation, the loneliness of outback life and the trauma of those returning from war. 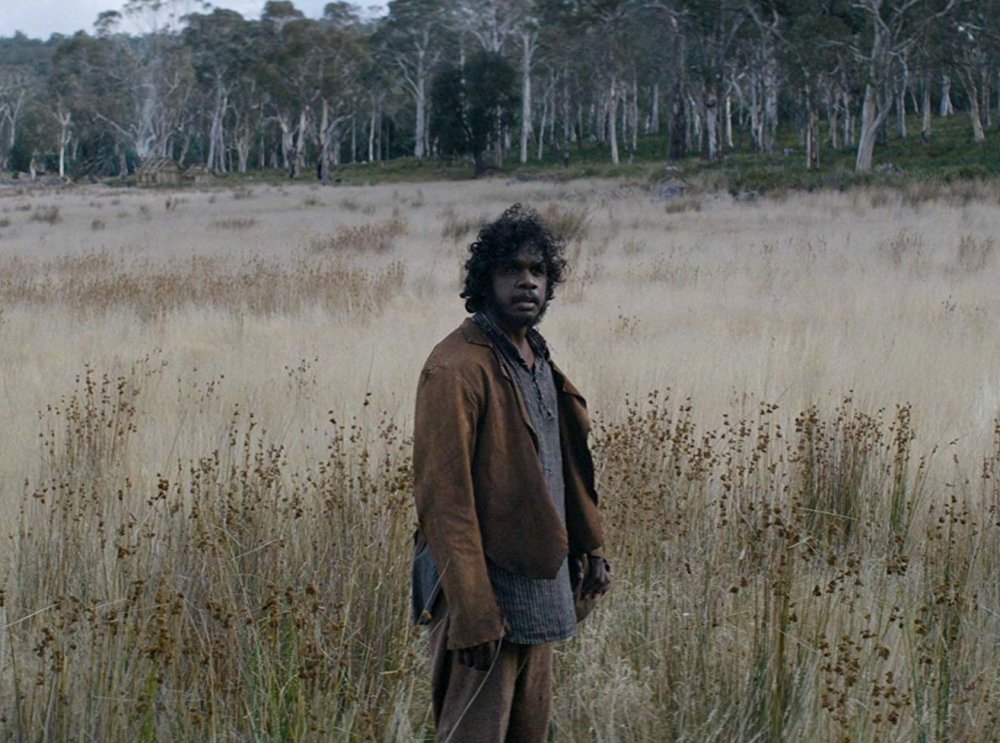 Irish-Italian actor Aisling Franciosi gives a stunning performance as Clare, a young Irish convict who relentlessly pursues a British officer, Hawkins (Sam Claflin), through the wilderness of Van Diemen’s Land, after he and his soldier viciously rape her and murder her husband and child. In the process, she forms a shaky alliance with a young Indigenous man, Billy (Baykali Ganambarr), escaping his own trauma at white hands.

Jennifer Kent’s big screen debut, The Babadook (2014), plugged into the cultural zeitgeist with its depiction of the paranoia experienced by a single mother who believes that fictional character from a children’s book has come to life in their home. The Nightingale is a very different film, a rape revenge western that depicts the sexual and racial violence of early colonial Australia in unflinchingly detail.