From Spirited Away to Your Name… here are some of the greatest Japanimation films of the century so far. 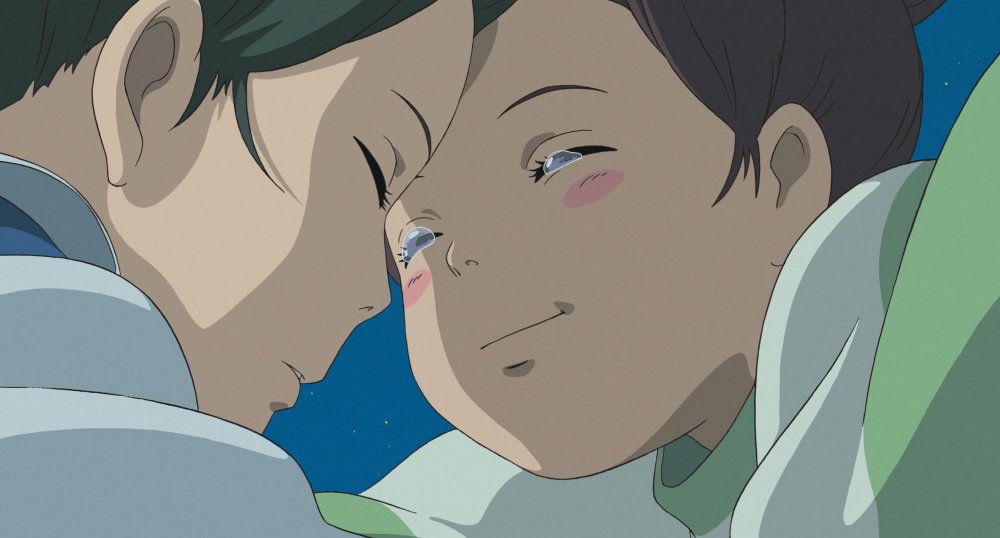 Japanimation is celebrated at BFI Southbank throughout May 2018

Over the course of the past two decades, anime has continued to shake off its reputation outside of Japan as a niche, or even juvenile, cinematic form. Studio Ghibli, barely known in the west until the international release of Princess Mononoke in 1999, is today one of the world’s most revered animation studios, having racked up six Oscar nominations this century, and with five of their features among the 50 highest grossing non-English films of all time. They’ve also played a pivotal role in expanding the very definition of anime, making the historic move of partnering with non-Japanese talent, led by Dutch animator Michael Dudok de Wit, to deliver 2016’s exquisite, dialogue-free The Red Turtle.

Looking beyond the output of this undisputed behemoth, small studio CoMix Wave Films has emerged as a major player in recent years thanks to the prodigious talents of director Makoto Shinkai, whose sublime Your Name (2016) is currently the highest grossing anime film of all time. And the cult of visionary auteur Satoshi Kon, who tragically died aged just 46 in 2010, has continued to grow in recent years, thanks in part to last year’s re-release of his chilling 1997 debut Perfect Blue.

Nevertheless, it remains a rarity for an anime feature not bearing the Ghibli seal of quality to receive worldwide theatrical distribution. As such, many Japanese animated gems continue to fly under the radar of mainstream audiences. But the 10 titles below are all available to watch in the UK, and offer a compelling overview of Japanimation in the 21st century thus far. 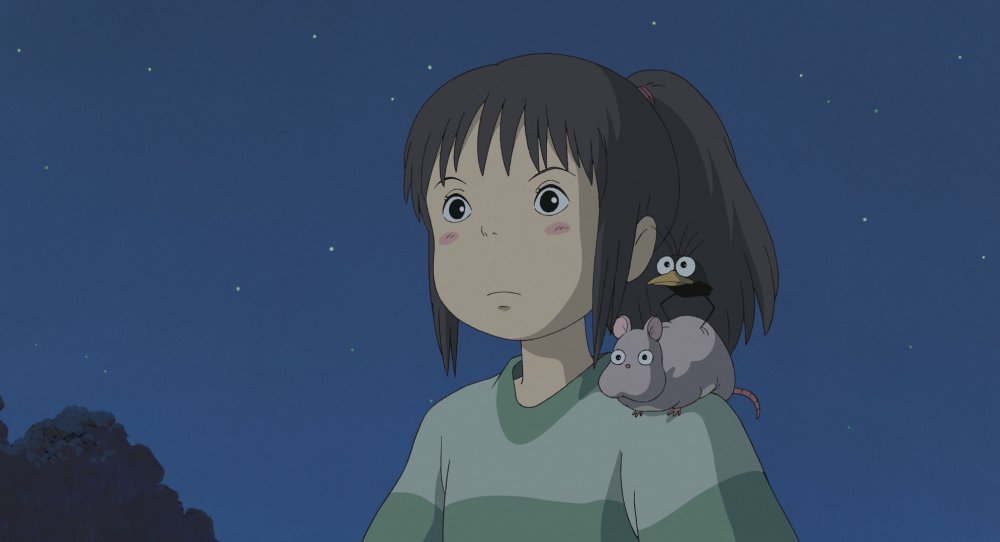 Hayao Miyazaki sealed his reputation internationally as Japan’s Walt Disney with a modern masterpiece that that surely needs little introduction. Spirited Away landed in UK cinemas in September 2003, by which time it had broken Japanese box office records, and won both the Berlinale Golden Bear and an Oscar for best animated feature.

This Alice in Wonderland-esque tale, about a withdrawn young girl caught in a spirit realm after her parents are transformed into pigs, is a spellbinding evocation of the loss of childhood innocence, elevated by sumptuously fluid animation, a bittersweet orchestral score and Miyazaki’s seemingly boundless visual creativity. Today, Spirited Away is a regular fixture on best-of lists of all stripes – it currently sits at number 28 on IMDB’s user-generated all-time top 250, while last year The New York Times declared it the second-greatest film of the 21st century to date. 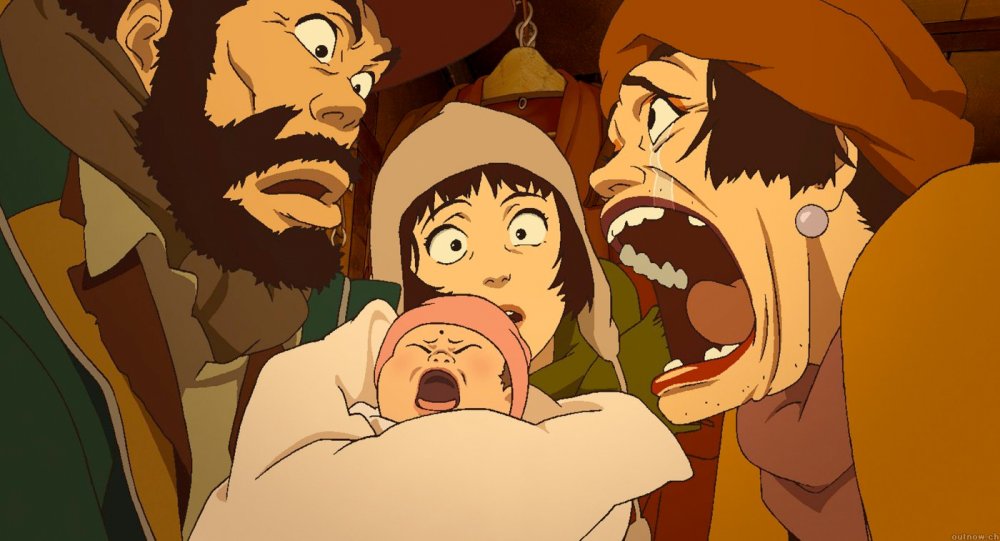 Marking a departure from the non-linear tricksiness that characterised his first two features, noirish psychological thriller Perfect Blue (1998) and ingenious Japanese history lesson Millennium Actress (2001), Tokyo Godfathers is by far Satoshi Kon’s most narratively conventional film. But this engrossing tale of three homeless people caring for an abandoned child at Christmas time still has plenty of surprises up its sleeves. When our central trio – gruff alcoholic Gin, teen runaway Aya, and Hana, a former drag queen who now identifies as a trans woman – embark on a quest to track down their foundling’s parents, what starts out as a social realist riff on the perennial Three Godfathers story elegantly evolves into an offbeat road movie, with the sudden intervention of a Hispanic hitman sending the story in a delightfully unpredictable direction.

Tokyo Godfathers also earns its place on the list as a nuanced, sympathetic portrait of a trans woman. Homophobic slurs are hurled at Hana in a manner that makes for uncomfortable viewing, but her heartbreaking backstory and aptitude for motherhood are conveyed with compassion and admiration. 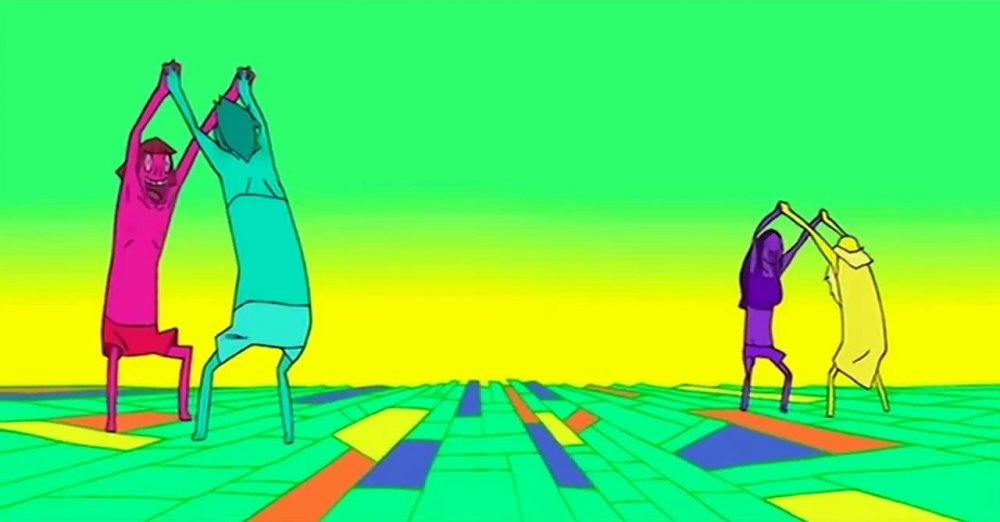 This head-spinning 2004 cult classic is finally readily available in the UK, having, at the time of writing, just been released on Blu-ray. Offering an experience roughly akin to ingesting a heavy dose of hallucinogens on the streets of Osaka, its closest cinematic cousins are psychedelic animated experiments of the 1960s and 70s, such as George Dunning’s Yellow Submarine (1968) and Ralph Bakshi’s Fritz the Cat (1972).

Essentially, it’s an expressionistic coming-of-age tale, with aspiring young manga artist Nishi determined to make the most of life after he’s shot, introduced to God and returned to Earth. During a protracted stint trapped in the belly of a whale alongside his high-school crush Myon and her older sister Yan, Nishi begins to move his gaze beyond his own navel. Mind Game’s dizzying temporal shifts and jump cuts owe something to the anarchic spirit of the French New Wave, while its chaotic mish-mash of disparate animation styles ensures that it looks like nothing else out there. 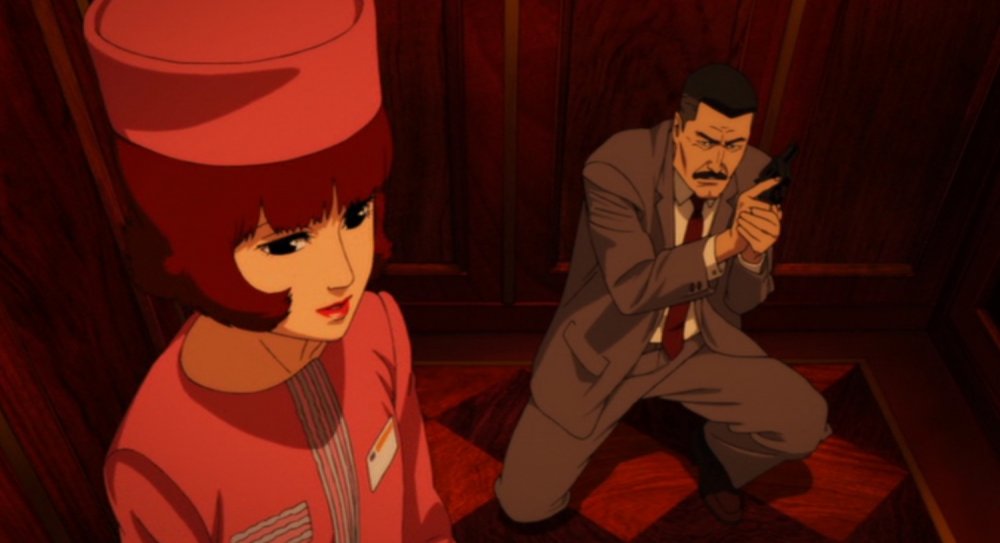 Satoshi Kon’s vibrant mind-bender spins a wild yarn hinged around a device called the DC Mini, developed to allow psychologists to view their patients’ dreams. We get to witness the device in action in a trippy opening sequence, in which the titular Paprika, the enigmatic alter-ego of Doctor Atsuko Chiba, attempts to help Detective Toshimi Konakawa make sense of his recurring nightmares. When a pair of prototype DC Minis are stolen, the thieves wage war on their creators by merging reality with a disorienting dreamscape.

Paprika is perhaps best known internationally for the uncanny manner in which it anticipates Christopher Nolan’s Inception (2010), another tale of crimes committed in the subconscious realm. But where Nolan’s dream world is chilly and cerebral, Kon’s is gloriously untethered, skewing closer to the creeping dread of David Lynch. And a subplot involving Konakawa’s frustrations as a failed filmmaker, and the untimely death of his former collaborator, is rendered extremely poignant by the fact that this would be Kon’s last completed film. Upon being diagnosed with terminal pancreatic cancer in 2010, he abandoned work on his follow-up Dreaming Machine to spend his final months at home.

Bearing the distinction of being the first major anime feature to be helmed by a non-Japanese filmmaker, Tekkonkinkreet is a visually intricate, frenetic, occasionally brutally bloody adaptation of Taiyō Matsumoto’s three-volume 1993-94 manga series. First-time director Michael Arias, a co-producer of the Wachowskis’ animated anthology film The Animatrix, draws on his background in VFX and animation software development to deliver a distinctive, seamless blend of hand-drawn and CG imagery.

Tekkonkinkreet tells the tale of Black and White, a pair of seemingly superpowered street orphans who serve as vigilantes on the mean streets of Treasure Town, a colourful dystopian city effectively run by the yakuza. Arias punctuates a satisfyingly scuzzy hard-boiled crime tale with surreal flourishes and moments of surprising tenderness, ensuring an unpredictable ride. But the real star of the show is Treasure Town itself, depicted here as a fascinating, feverish cross between Mumbai, Hong Kong and a dilapidated Japanese theme park. 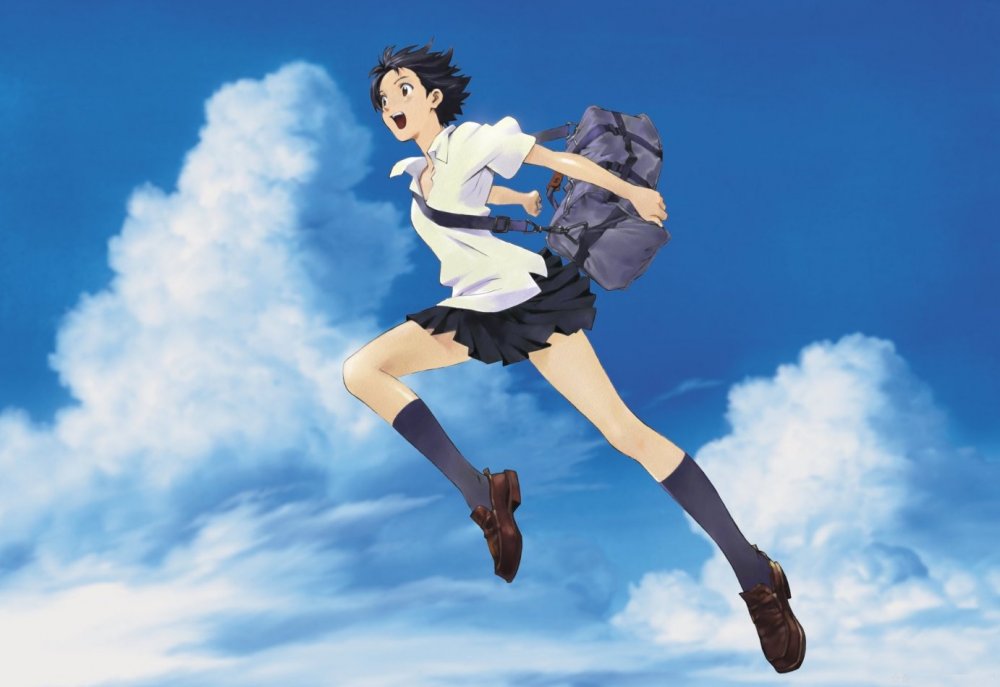 Since breaking ties in the mid-2000s with mainstream anime factory Toei Animation, home of Digimon and Dragon Ball Z, Mamoru Hosoda has delivered a succession of critically revered and commercially successful features, starting with this loose adaptation of/sequel to Yasutaka Tsutsui’s 1967 sci-fi novel. It charts the fantastical exploits of Makato, an endearingly unsure-of-herself high schooler who suddenly finds herself able to take charge of her destiny by rewinding time.

Preoccupied with the trivialities of adolescent life, she wields her new power frivolously, turning back the clock to avert minor embarrassments and, in one instance, to stretch out an after-school karaoke session into a 10-hour marathon. But Makato is dealt a double-whammy of rude awakenings, as it emerges that she’s been granted a finite number of “leaps”, and that her self-serving approach to time travel may ultimately have grave consequences for others. The result is equal parts effervescent YA comedy and moving metaphysical melodrama. 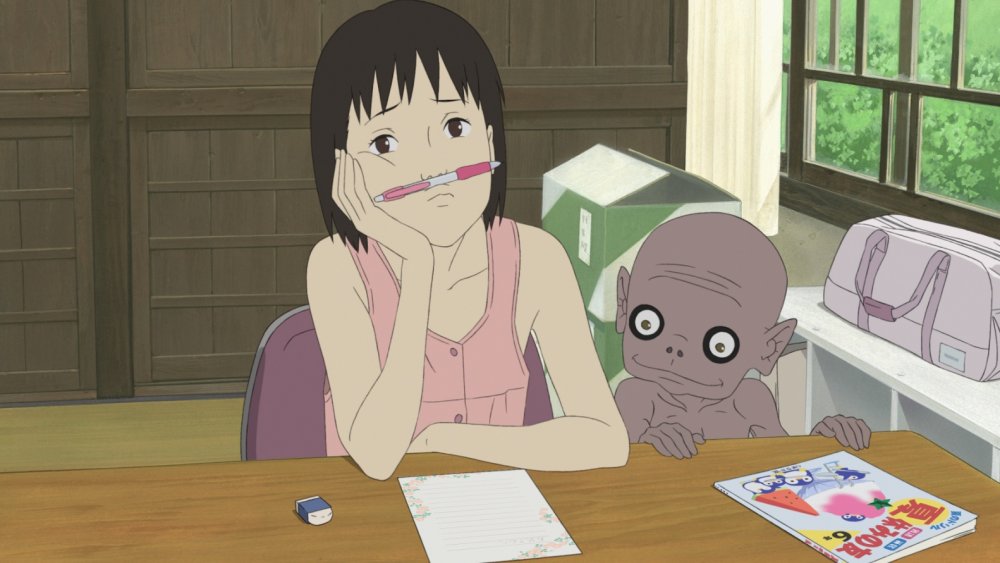 This intimate directorial effort from veteran animator Hiroyuki Okiura, who worked on classics like Akira, hinges around a simple but deeply affecting premise. Following the death of her father Kazuo, 13-year-old Momo moves with her mother from Tokyo to a remote rural island. Haunted by the fact that she had argued with Kazuo in his final days, she fixates on an unfinished letter he had begun to write to her shortly before his passing. In a fantastical turn of events, a trio of comically grotesque spirit creatures show up to guide Momo through the grieving process.

The film’s languorous first act perfectly captures the interminability of an unhappy childhood summer, with tranquil, sun-kissed vistas serving as a poignant counterpoint to Momo’s evident inner turmoil. And when things take a turn for the otherworldly, Okiura handles the tonal shifts elegantly, even managing to incorporate an elaborate fart joke without tipping the balance too far towards juvenalia. 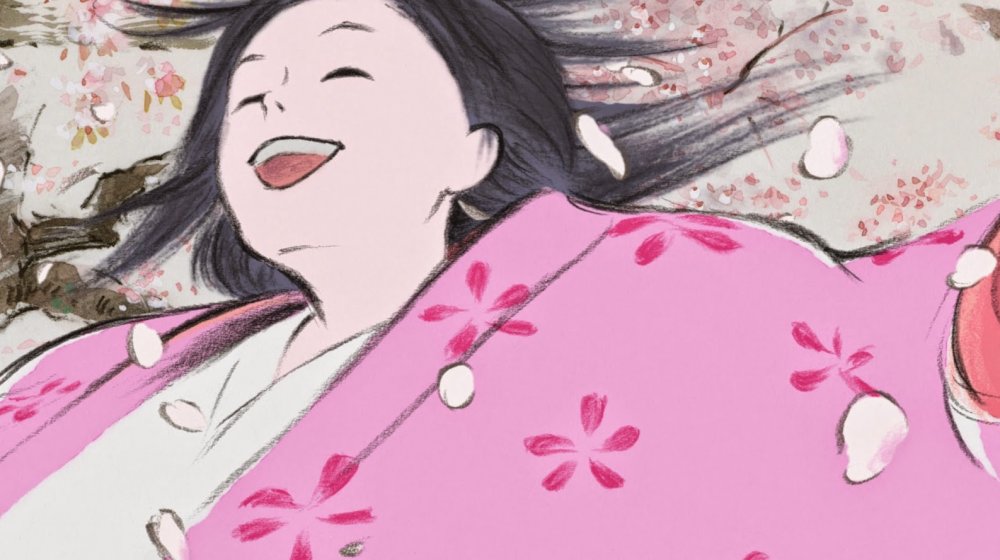 Ghibli co-founder Isao Takahata’s riff on Japan’s oldest surviving prose narrative is an exquisite labour of love, years in the making. The Tale of the Princess Kaguya sees an elderly bamboo cutter left dumbstruck after he discovers a tiny girl inside a glowing shoot. Bringing this apparent miracle of nature back home to his wife, the couple raise the child as their own. But the revelation of the girl’s true origins puts a major strain on familial bonds.

Eschewing the intricate, colourful style that characterises most of Ghibli’s best-loved features, Takahata aims for something looser and more expressionistic, delivering a film looks like an unfinished watercolour painting brought to life. This relative visual sparseness lends a melancholy tone to proceedings, foreshadowing a truly heart-wrenching climax. 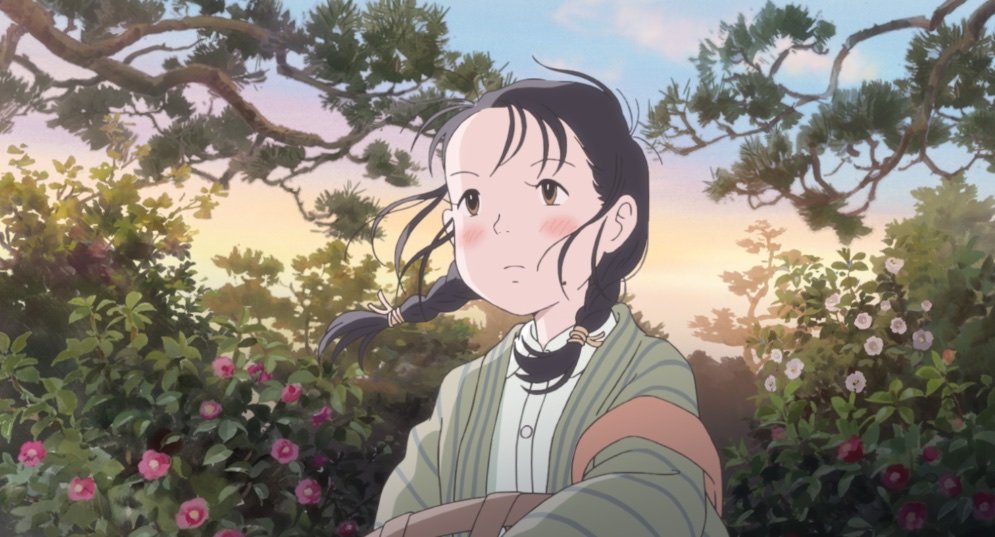 Japanese animators are often praised for their willingness to broach challenging real-world subjects that western studios wouldn’t touch with a bargepole, and Ghibli alumnus Katabuchi pulls off quite a feat here with this child-friendly evocation of Hiroshima during the second world war.

Adapted from Fumiyo Kōno’s manga series of the same name, it tells the story of Suzu, whom we first meet in 1933 as a young girl living in the small township of Eba. In This Corner of the World takes its time to really immerse the viewer in the gentle rhythms of our protagonist’s unremarkable domestic life, before her arranged marriage to a naval officer turns her existence on its head. The war remains a distant, unseen threat for much of the film’s running time, but Katabuchi pulls no punches in grappling with its devastating consequences. Yet an impressionistic animation style ensures that even its bleakest moments are infused with graceful beauty, while Suzu’s quiet stoicism allows the film to end on a cautiously optimistic note. 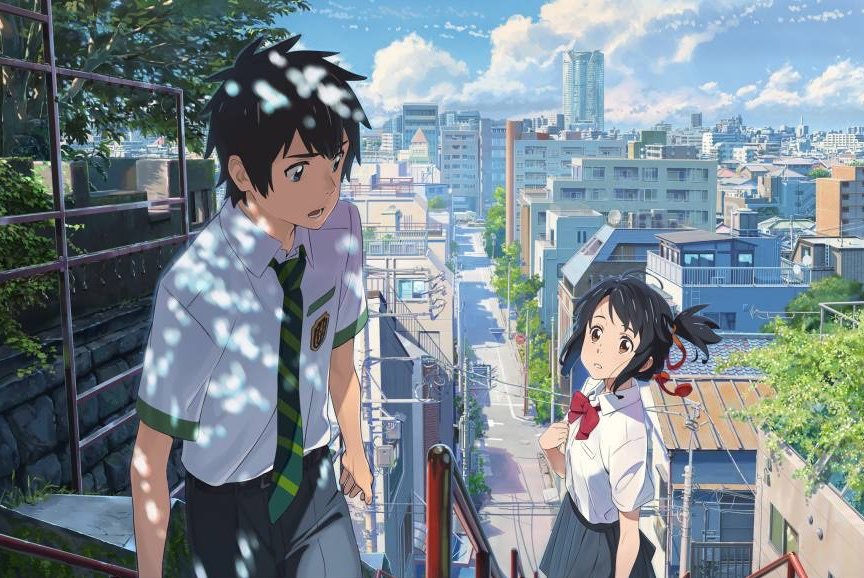 Makoto Shinkai established himself as Hayao Miyazaki’s heir apparent with this glorious existential teen drama, which is currently Japan’s fourth highest-grossing film of all time. It starts out as a playful, visually dazzling riff on body-swap comedy tropes, with small-town girl Mitsuha and Tokyoite Taki intermittently, and unwittingly, hijacking one another’s physical forms. Once the pair, who’ve never met, figure out what’s going on, they find inventive ways to communicate with one each other, and thus begin to form a uniquely intimate bond.

Just as it starts to look like things are heading in a quirkily romantic but somewhat predictable direction, a seismic twist ups the stakes dramatically for all concerned. The scene is thus set for a breathtaking final act that marries the race-against-the-clock exuberance of Back to the Future (1985) with the transcendentalism of Terrence Malick’s The Tree of Life (2011).