10 essential films to watch after Once Upon a Time... in Hollywood

It’ll come as no surprise that the latest from Quentin Tarantino, which hits UK cinemas this week, is endlessly referential in its cultural allusions. We picked out ten essential films for further viewing after Once Upon a Time… in Hollywood. 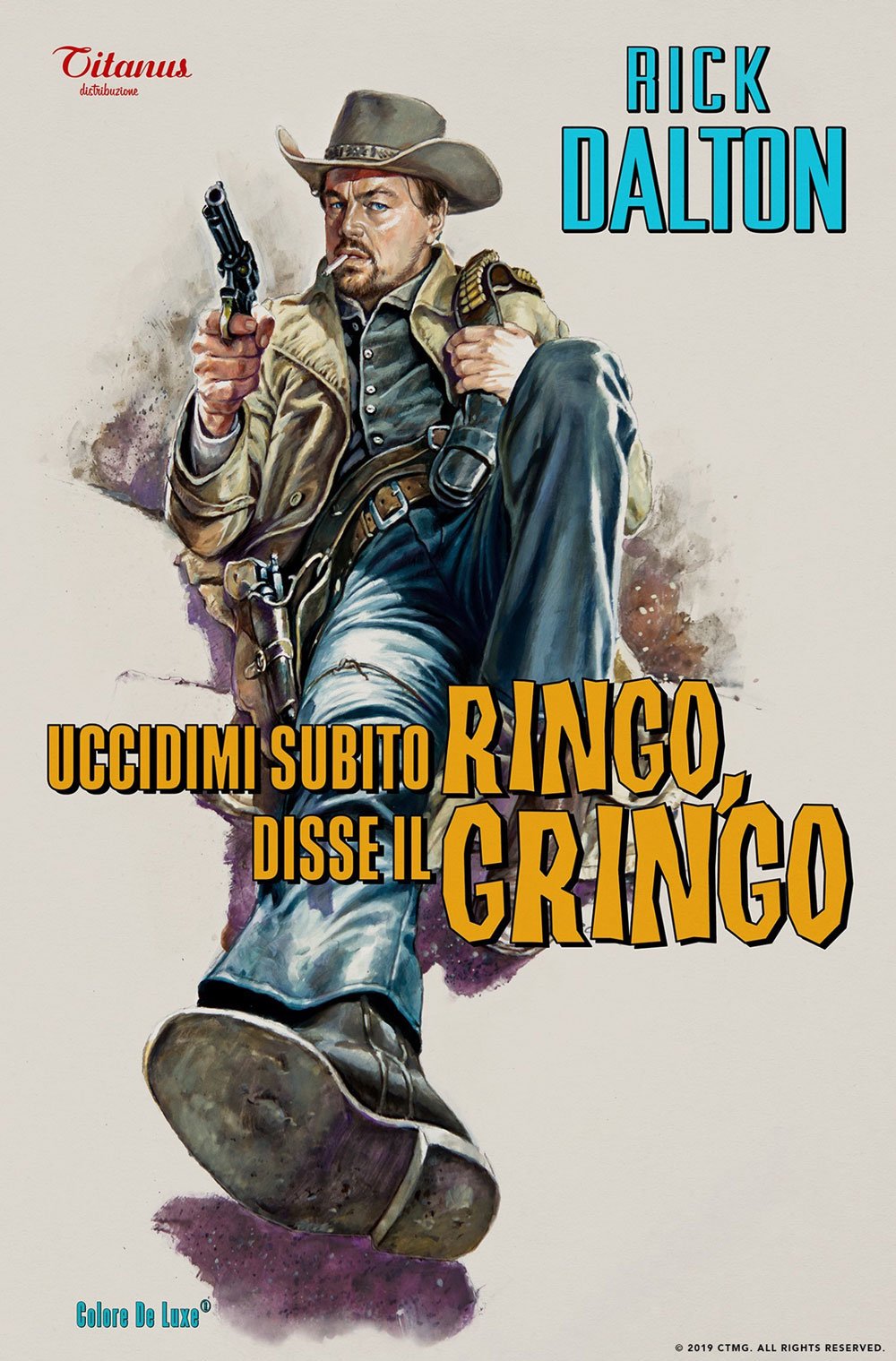 Rick Dalton movie poster from Once Upon a Time... in Hollywood (2019)

Certain studio films of the late 1960s retained an old-fashioned vision of classical genres like the musical, the war film or the western, a sensibility aligned with Once Upon a Time… in Hollywood’s leads, troubled TV and movie star Rick Dalton (Leonardo DiCaprio) and his stuntman Cliff Booth (Brad Pitt). Simultaneously, a wave of independent films emerged imagining alternatives in a spirit of optimism and formal experimentation. Capturing a pervasive sense of youthful rebellion, these films often referenced a burgeoning American counterculture and hippie lifestyle. The latter is something Rick and Cliff find abhorrent and which, for better or worse, is ultimately embodied by the film’s own vision of the Manson Family. Much has been made of Tarantino’s new film, in particular its playful creation of alternative realities, historical and proto-cinematic. However, just as striking is its thorny evocation of some of these key collisions and contradictions in the Hollywood of the late 1960s and a turbulent American social landscape. Watching the following films can hopefully help to deepen the movie’s collage effect, and, without giving too much away, problematise its provocative conclusion. 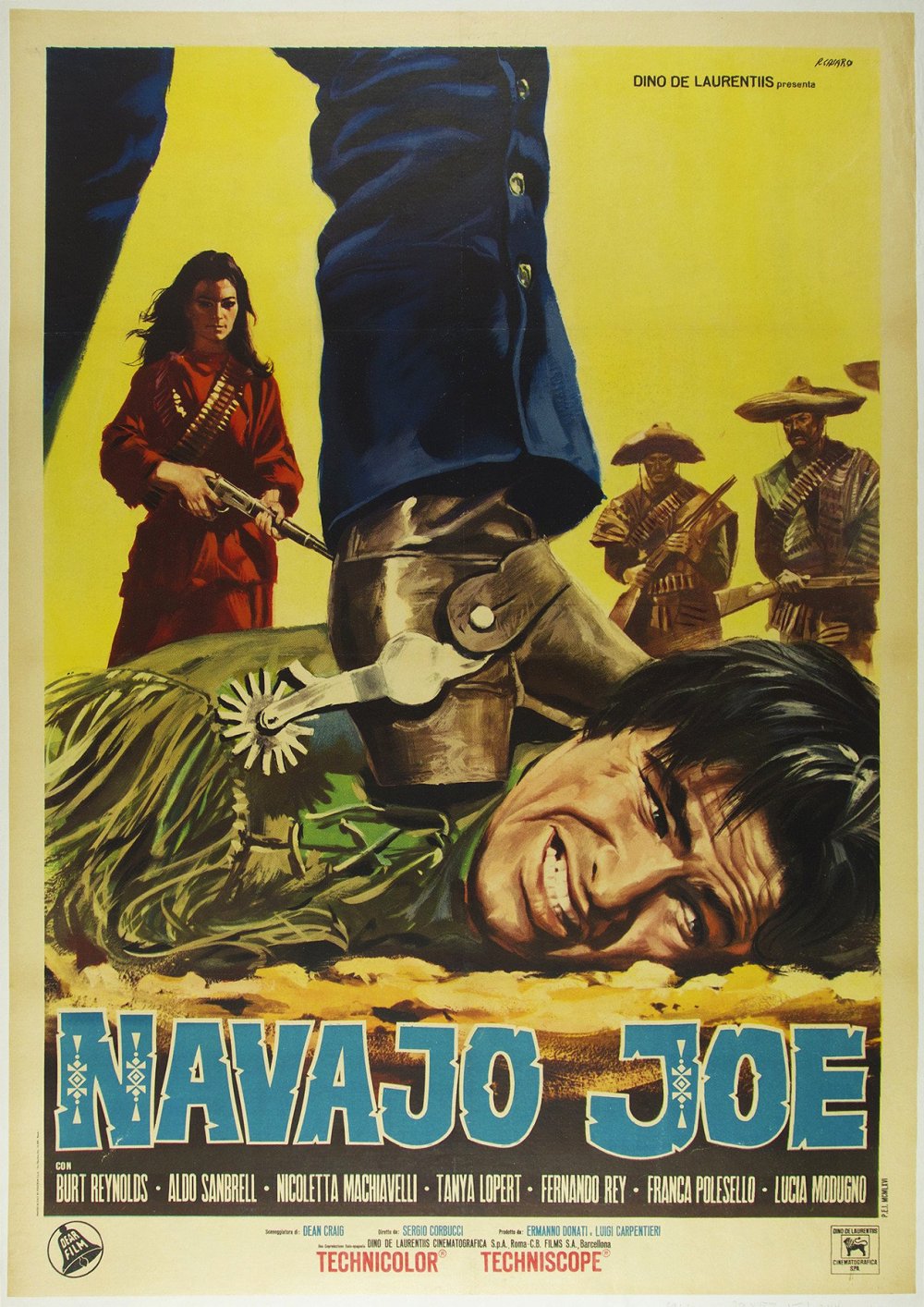 Early in Once Upon a Time… in Hollywood Rick meets prickly agent Marvin Schwarz (Al Pacino) who suggests he travels to Europe to shoot westerns with Sergio Corbucci. It’s hard not to think here of Burt Reynolds who, fresh from years on Gunsmoke (1955-1975), went to Spain to shoot Navajo Joe with Corbucci in 1966. Reynolds plays the titular monosyllabic Native American, who seeks vengeance on the bandits who wiped out his tribe. That violent and sexually charged films like Corbucci’s were successfully imported, dubbed and released to American audiences can only have shown up more restrained Hollywood westerns, just as they breathed new life into the careers of fading American stars. 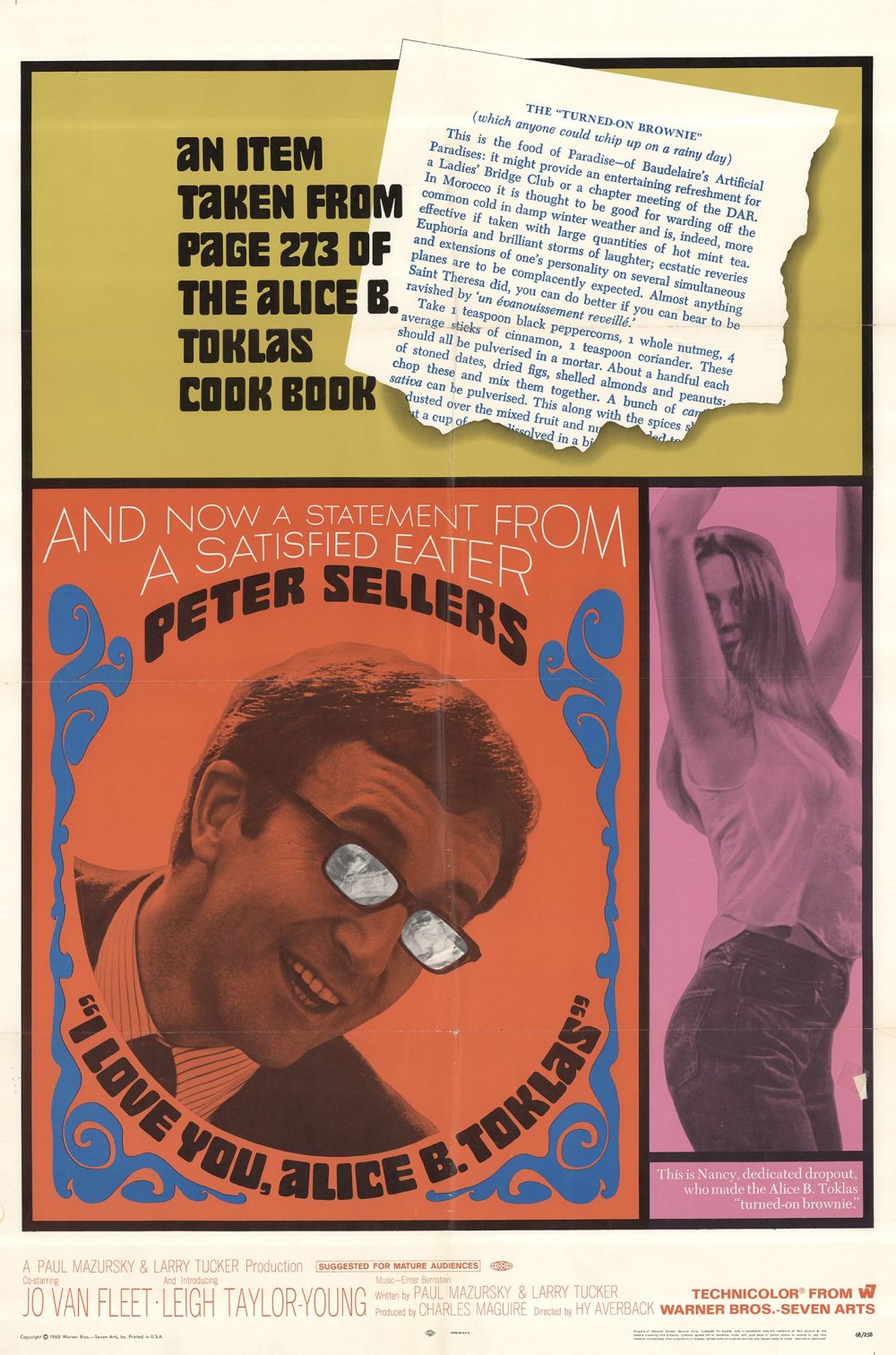 When establishment dinosaur Cliff Booth has an ominous run-in with various members of the Manson family at Spahn Ranch, Tarantino dramatises the idea of old Hollywood colliding with a new youth culture about which it understood very little. While low budget independent sensations of the period like The Trip (1967), Psych-Out (1968) and Easy Rider (1969), sought to explore the emerging counterculture and experimentations of commune life without judgement, Hollywood studios reckoned with it in a rather more dismissive fashion with comedies including Skidoo (1968) and How to Commit Marriage (1969). In I Love You, Alice B. Toklas!, Peter Sellers’ uptight lawyer Harold Fine decides to live in a commune with the free-spirited hippie Nancy (Leigh Taylor-Young). While much of the humour sniggers at flower power and ‘free love’, it also pokes fun at an uptight world of ‘squares’. The film provides a window into two worlds colliding, onscreen and off, without solutions. And at the brink of enormous social change, it shows Hollywood struggling to comprehend an emerging and engaged youth audience. 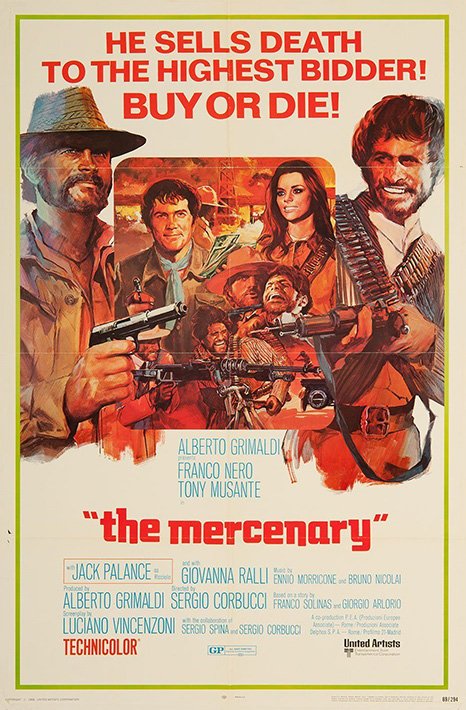 Shot two years after Navajo Joe and featuring a similarly incongruous Hollywood star in the form of Jack Palance as villain Curly, this 1968 entry stars Franco Nero as laconic and amoral gunslinger Kowalski. Nero had already played Django for Corbucci in 1966, but Kowalski is a more brutish and amoral character, his signature being to light matches off any available surface, from the shoes of a dead man to the bare breasts of a dancing girl. It’s an astonishingly violent film, full of grisly set pieces and elaborate scenes of torture. Another clear influence on the increasingly explicit and morally ambivalent westerns that would emerge from Hollywood at the end of the 1960s and 70s, it’s a blood-soaked blast in which zero heroes emerge. 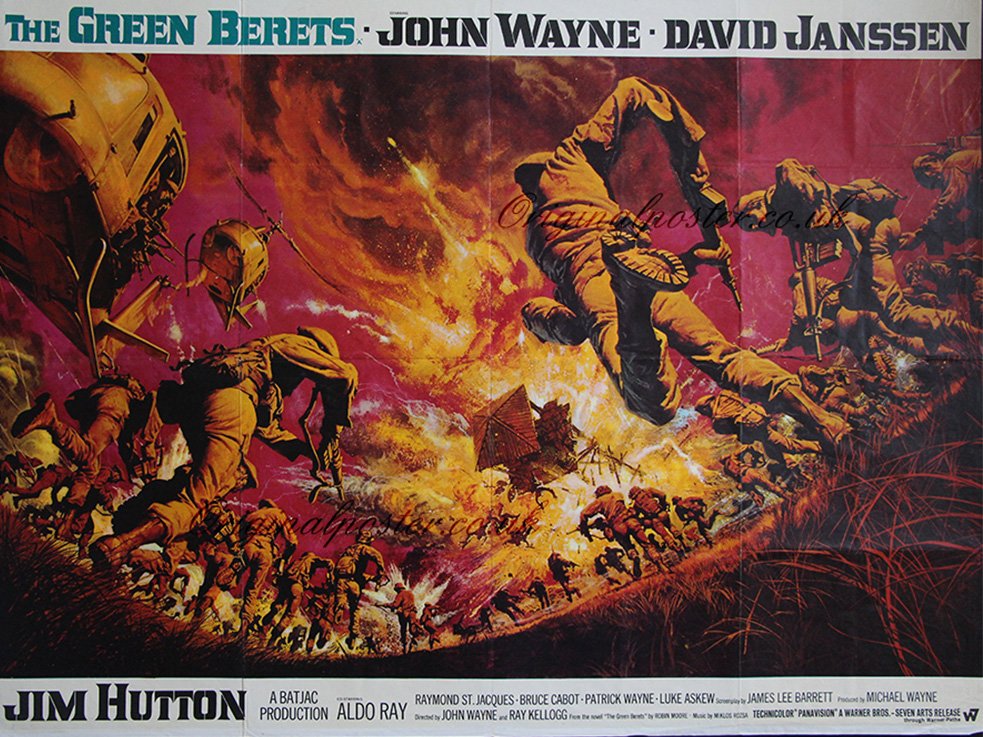 With the popularity of the Vietnam war waning in the American imagination amid daily TV updates of atrocities and defeats, ultra conservative Hollywood icon John Wayne took it upon himself to star and co-direct this 1968 war epic with a big budget and studio backing, and support from the American military. It’s a jaw-droppingly poorly conceived film, in which gung-ho Americana collides with queasy oversimplification of the conflict and locals. Moreover, the classical style and tame battle scenes align it with an increasingly outdated and polite approach to action filmmaking. It remains a fascinating snapshot of a Hollywood thoroughly out of touch with the popular mood of unrest, and absolutely essential viewing for anyone interested in the propagandising function of film. Moreover, it’s hard not to imagine Rick Dalton being over the moon had he nabbed a bit part in this. 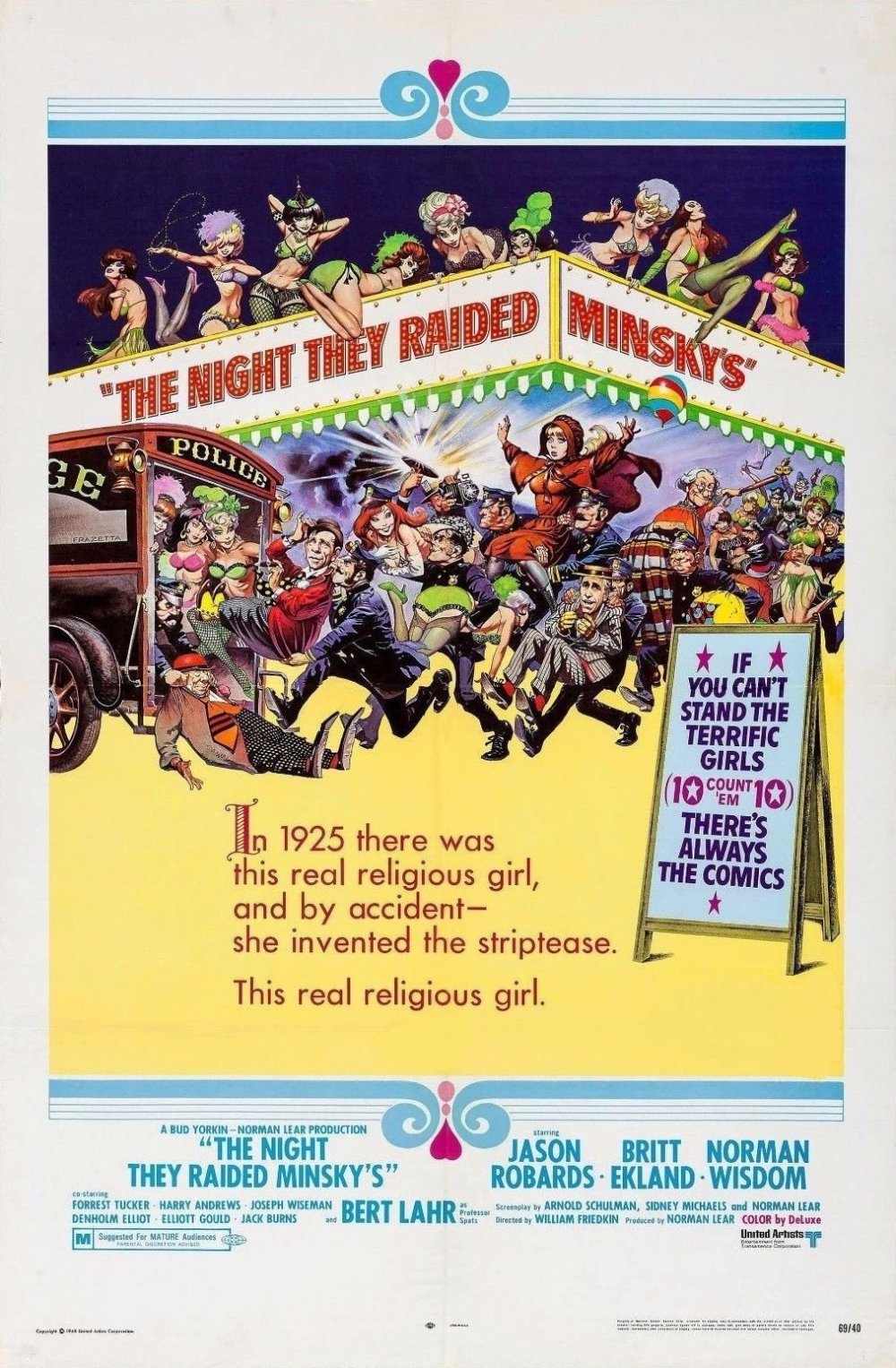 A marquee for this film is pointedly visible in one scene of Once Upon a Time… in Hollywood. A diegetic musical exploring the burlesque scene in early 20th century New York, it’s a raucously funny feature showcasing an all-star, cross-generational cast of performers from Bert Lahr and Norman Wisdom to Britt Ekland and the screen debut of Elliott Gould. The flimsy plot proves an excuse to stage various elaborate burlesque numbers against the backdrop of lavish sets. But what makes the film significant is its kinetic filming style and frenetic editing, integrating a wealth of archive footage in inventive ways. And while it belongs to a tradition of variety musicals stretching back to the 1930s, the film itself feels strikingly modern, something akin to the work of Richard Lester. That it was directed by future poster boy of the New Hollywood, William Friedkin, only adds to the sense of two versions of Hollywood colliding in an exciting and uneasy mix. 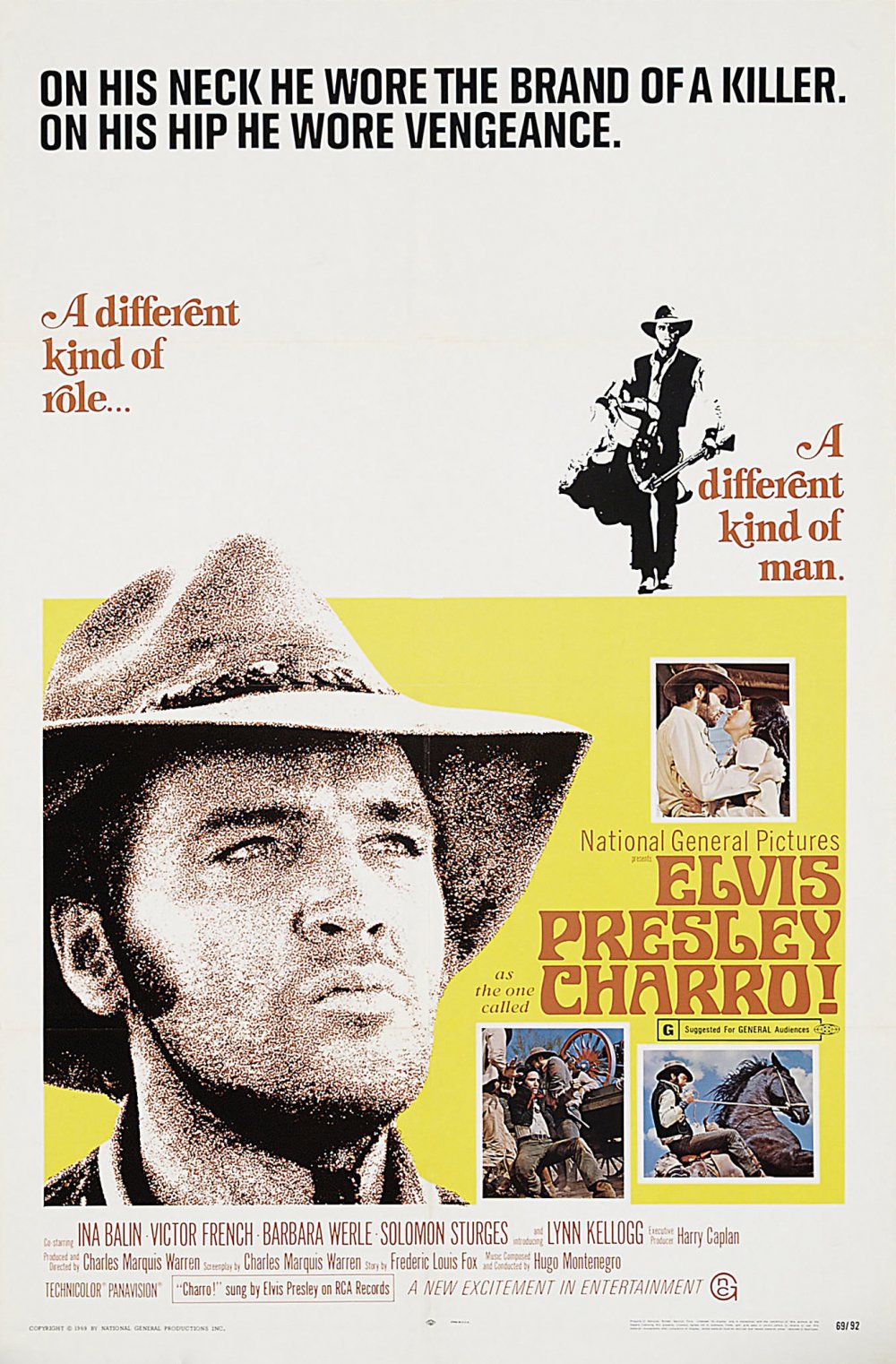 Making a guest appearance on TV western ‘Lancer’, Rick is at one point forced to wear elaborate facial hair and a hip, anachronistic outfit at the behest of the director. Watching the late Elvis Presley studio western Charro!, a forgotten box office hit of 1969, it’s hard not to think of Rick. Playing a reformed bandit, Elvis appears in outfits that seem rather incongruous, trousers slightly too flared, waistcoat and necktie a little too modern to pass in a turn of the century frontier town. The film itself also seems conflicted, combining an old-school matinee western town-under-siege plot and virtuous heroics with edgier flourishes of violence at the hands of villains who seem to have stepped in from the more brutish landscape of the spaghetti western. 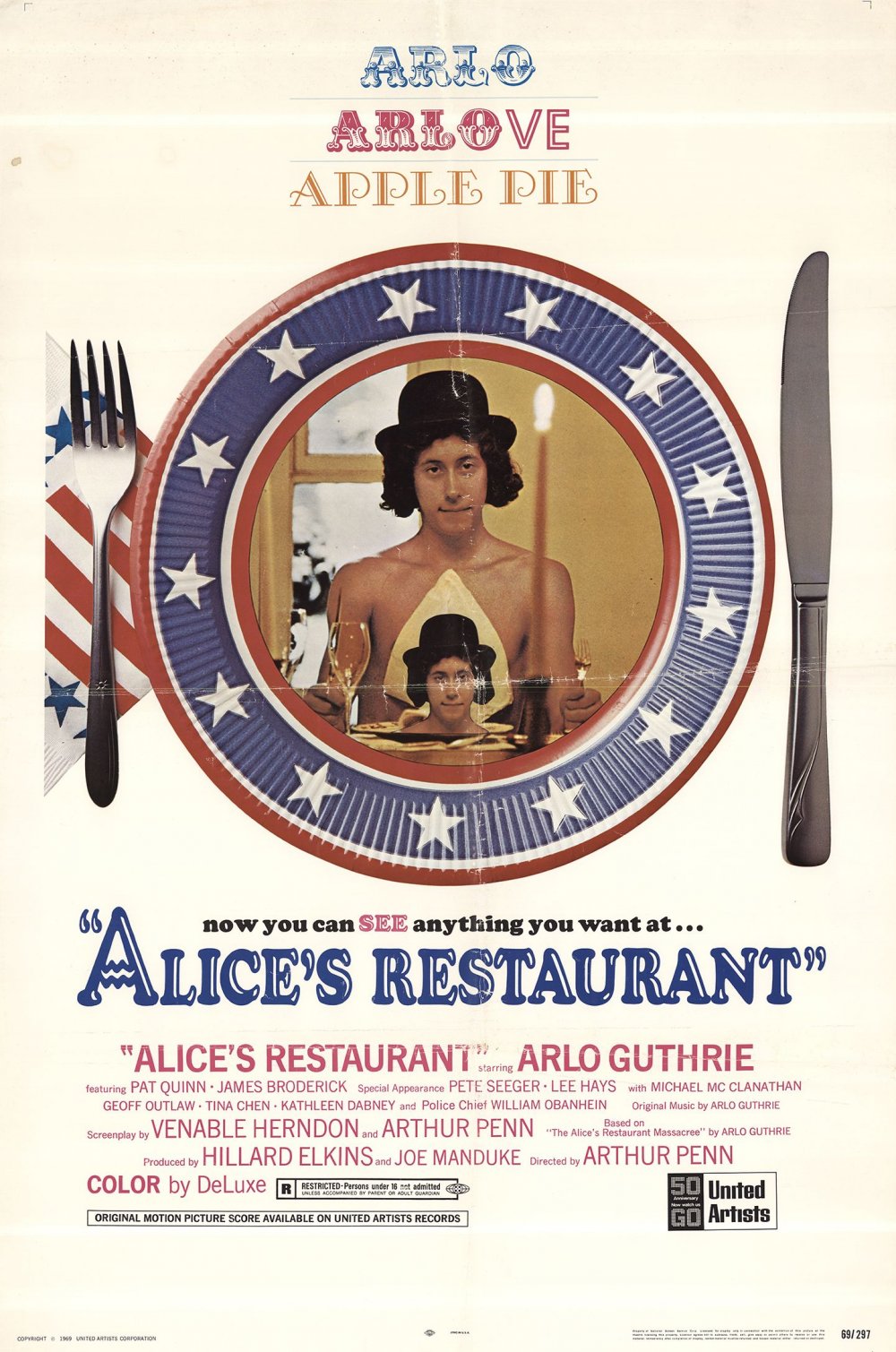 Arthur Penn followed the success of Bonnie and Clyde (1967) with this madcap, unruly comedy, a kind of kaleidoscopic, semi-biographical film about folksinger Arlo Guthrie, playing himself. The loose fragmentary plot shows Arlo cross America, dodge the draft and find a new home in a commune built out of an abandoned church, all tied together by Guthrie’s rather lovely, lyrical narration. Often inscrutable and dated, the film nonetheless captures a spirit of rebellion and anti-establishment sentiment unclouded by disappointment or economic hardship. The spirit of optimism, free love and political rebellion that characterise this commune stand in marked contrast both to slightly later, doom-filled cinematic explorations of the counterculture, and Tarantino’s film. 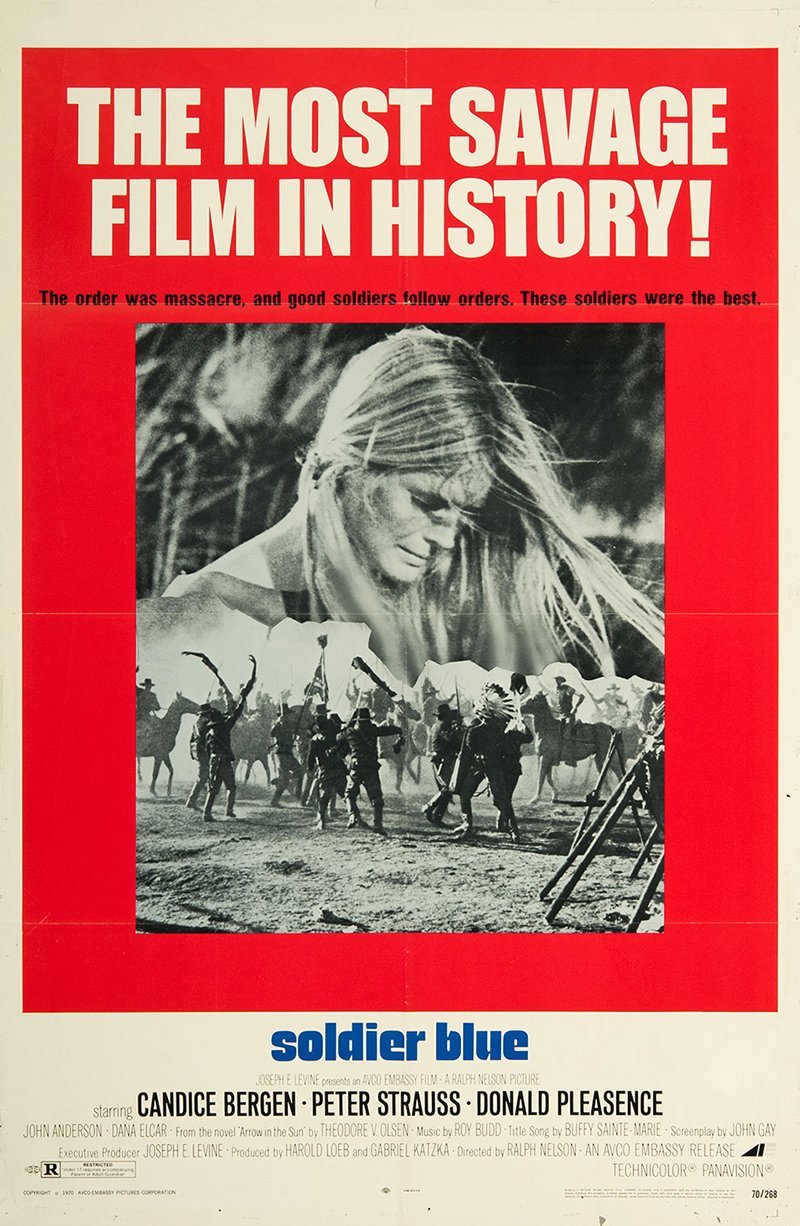 One of New Hollywood’s most upsetting westerns, Ralph Nelson’s controversial 1970 film sits alongside revisionist films including Little Big Man (1970), A Man Called Horse (1970) and Ulzana’s Raid (1973) in its examination of atrocities inflicted on Native American people at the hands of settlers in the late 19th century. Enjoying the artistic benefits of a newly relaxed attitude to representing sex and violence, Nelson stages the historic Sandcreek Massacre in unflinching detail. But he also draws strong parallels with the Vietnam conflict: though allegorical in its confrontation, the echoes of atrocities such as My Lai are strong. Our window into the film, taking the form of a young white man and woman who observe the massacre — conduits for a newly politicised American youth — is one of horror, disillusionment and disgust. Moreover, the film embodies the perfect intersection of studio filmmaking, independent production aesthetics, European influence and politicisation that came to a head just as Once Upon a Time… in Hollywood’s narrative comes to a close. 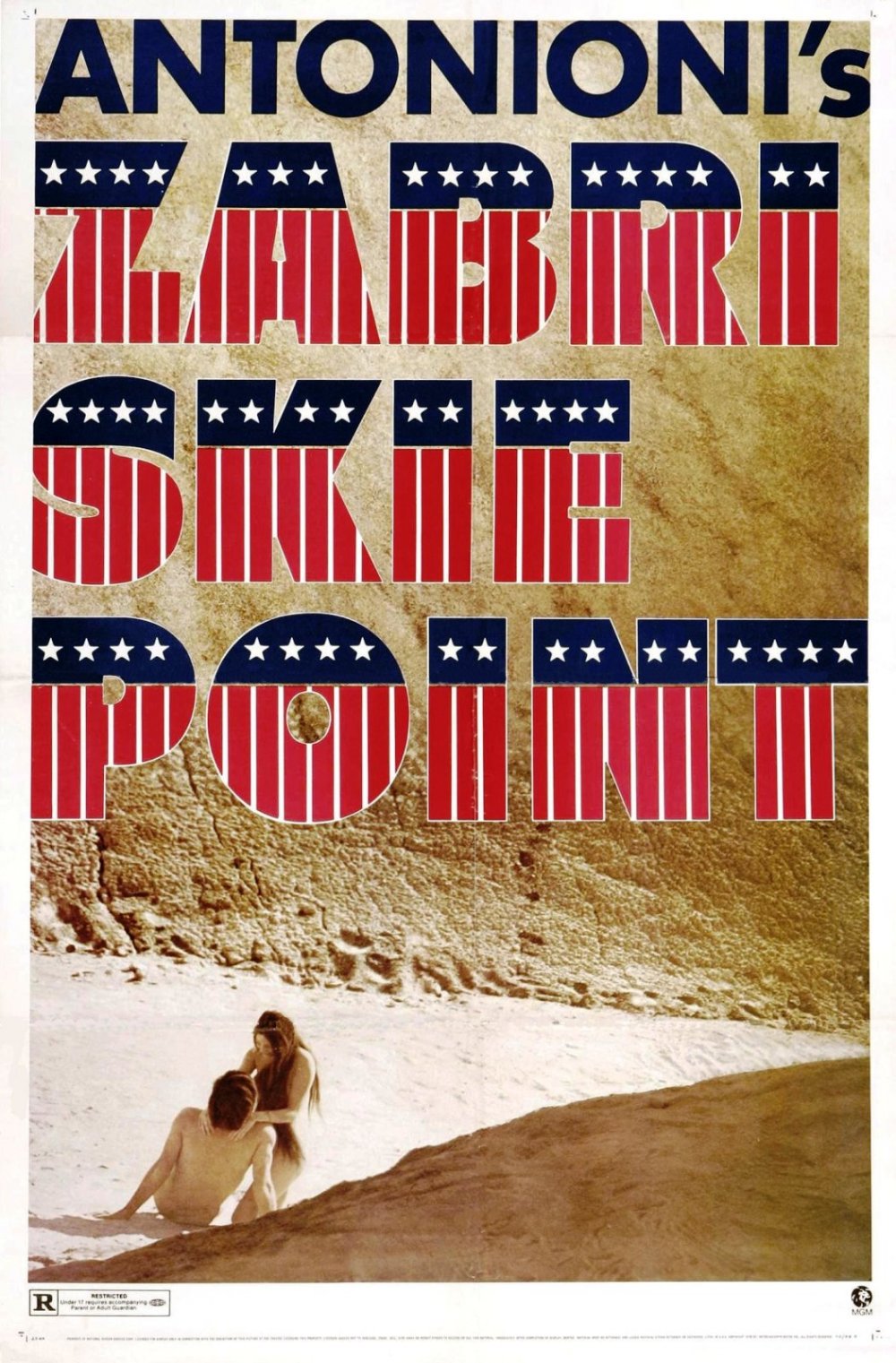 Antonioni’s elliptical and impressionistic film brings a profoundly European sensibility to its depiction first of politicised campus protesters caught up in conflict with cops, then uptight squares in an office block, and eventually a pair of drifting kids who make love in the Californian desert at a bizarrely abstracted commune. The hallucinatory effect of the film, capturing as it does a conflict between energised youth and scared, cynical elders in an overwhelmingly sensory fashion, is dizzying as are the extravagant widescreen cinematography and the increasing reliance on richly symbolic imagery over dialogue as the film progresses. It’s as far removed from classical Hollywood filmmaking as you can imagine; a radically erotic, radically different take on the youth movement to anything proffered by dismissive old-school Hollywood, urgent countercultural indies, or Tarantino, gifted 50 years of hindsight and the cultural shorthand of ‘The Manson Family’ to embody hippiedom and the emerging youth movement. 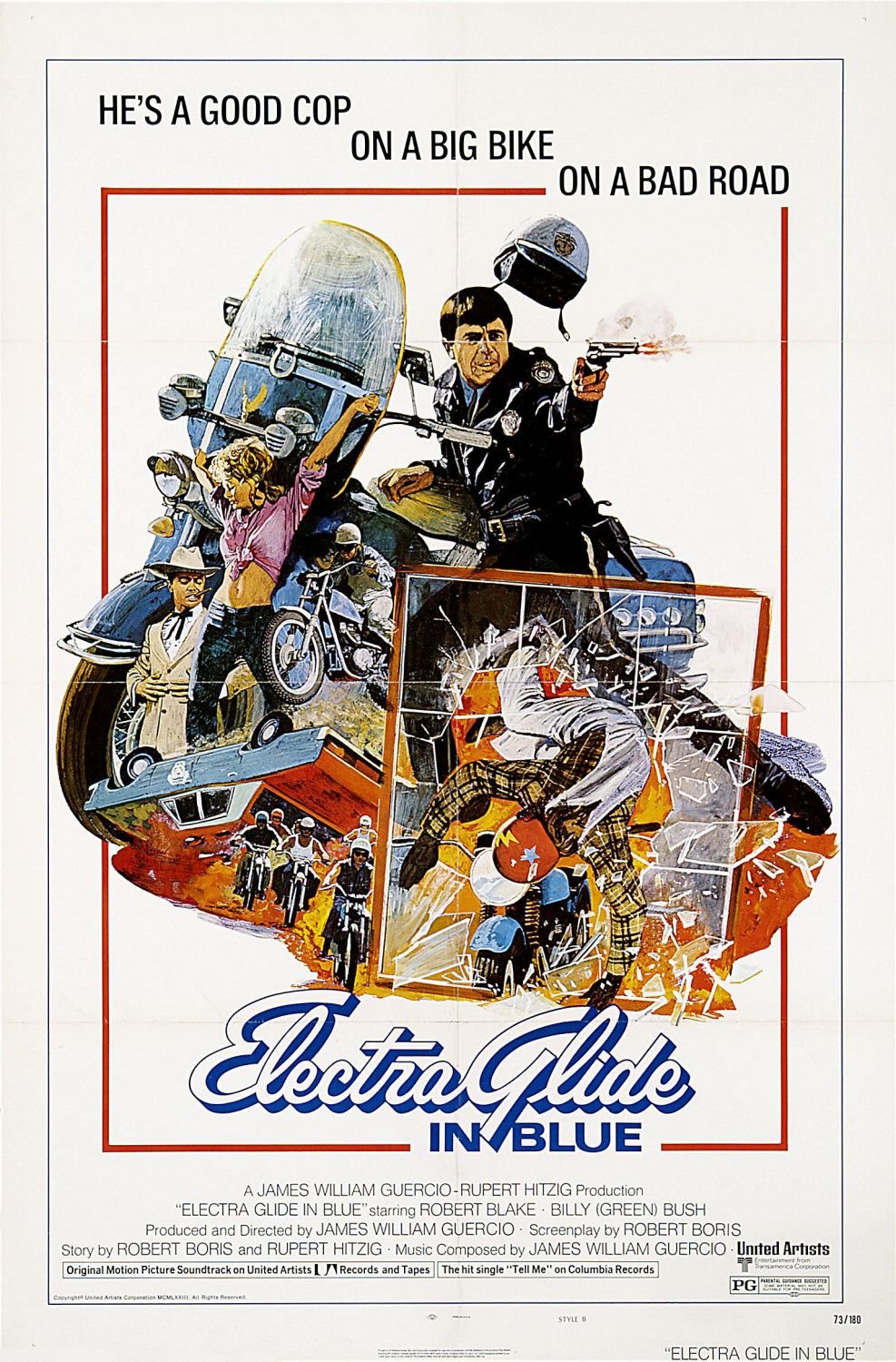 Much like contemporaneous road movies Two Lane Blacktop (1971) and Vanishing Point (1971), this fast-paced and downbeat film uses the desert road to explore the existential crises of various trapped people, the difference being that the hero here is a traffic cop and Vietnam vet rather than a criminal on the run or a hippie drop-out. Beautifully shot, entirely unpredictable and overwhelmingly pessimistic, the film demonstrates just how far commercial American filmmaking had come in just a few years. But what makes it particularly interesting in relation to Once Upon a Time… is a scene set in a failing commune visited by our hero, John Wintergreen (Robert Blake).

The visuals strongly echo Tarantino’s depiction of Spahn Ranch as a space of deprivation, debauchery and chaos lived out in the desert by strung-out dropouts and druggies. But rather than a sense of evil lurking in the shadows, it is a feeling of disappointment and failure that permeates the scene. And instead of standing out as something hostile and unwanted, as it does in Tarantino’s film, the commune here is of a piece with Electra’s general malaise — perhaps its most touching example. Unlike the other sad cases populating the film, or the intense misanthropy of the Tarantino, this does not hint at the slow disintegration of all hope or the destruction of a dream by external forces, but rather suggests instead the scorching disappointment of something attempted, and failed.