We count down 10 of Dame Maggie’s very best and haughtiest turns. 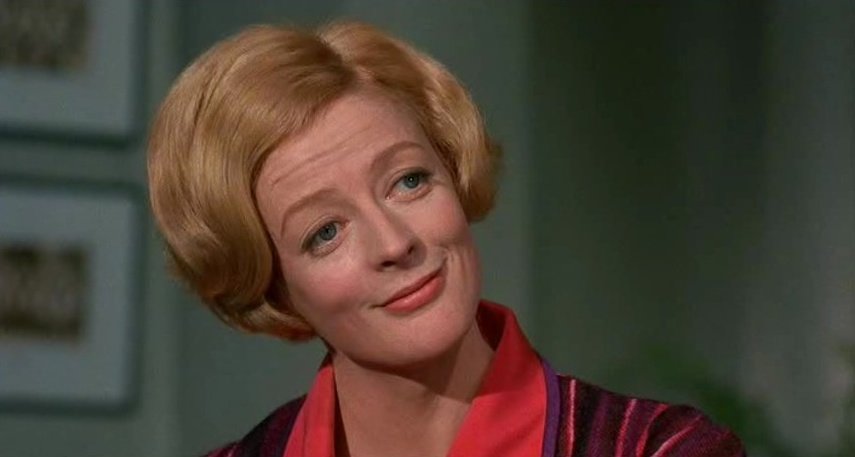 Maggie Smith made her first movie in 1958 – Seth Holt’s Nowhere to Go, a sharp, edgy black-and-white thriller in which she played a rich, snooty loner who befriends a petty criminal and conman – and has made upwards of 50 since. Not only is she one of our most prolific home-grown movie stars, she’s also one of the most varied and surprising. This selection, and the whole BFI season across December and January, reflects both her comic brilliance and her continual, forensic search for the truth of what she is saying.

Her instinctive comic technique sprouted in early days in West End revue stardom with Kenneth Williams, and this was harnessed to the tragic, unsentimental vivacity and emotional rawness of her stage performances as a founder member of the National Theatre with Laurence Olivier, where she also worked with Franco Zeffirelli and Ingmar Bergman.

Her portfolio includes seven of the Harry Potter movies – she describes her Professor Minerva McGonagall as Jean Brodie in a witch’s hat – and her imperious Lady Constance Trentham in Gosford Park, template for the Dowager Duchess of Grantham in Downton Abbey, one of TV’s most successful dramas. She’s the spine of the series and its biggest attraction all over the world.

Maggie got slightly typecast as a feisty, resourceful secretary in early movies. Here, she’s Aussie tycoon Rod Taylor’s romantically-inclined office gofer in a sort of Grand Hotel of the airport lounge in a fogbound Heathrow. In a lovely scene with Richard Burton she pleads for financial assistance to beat off a corporate takeover of Rod’s business. Burton said she didn’t just steal this scene: she committed grand larceny. She also keeps top class company in the fog-bound airport lounge with Orson Welles, Elizabeth Taylor, Margaret Rutherford and even David Frost as a cringing journalist. Terence Rattigan wrote the entertaining script. 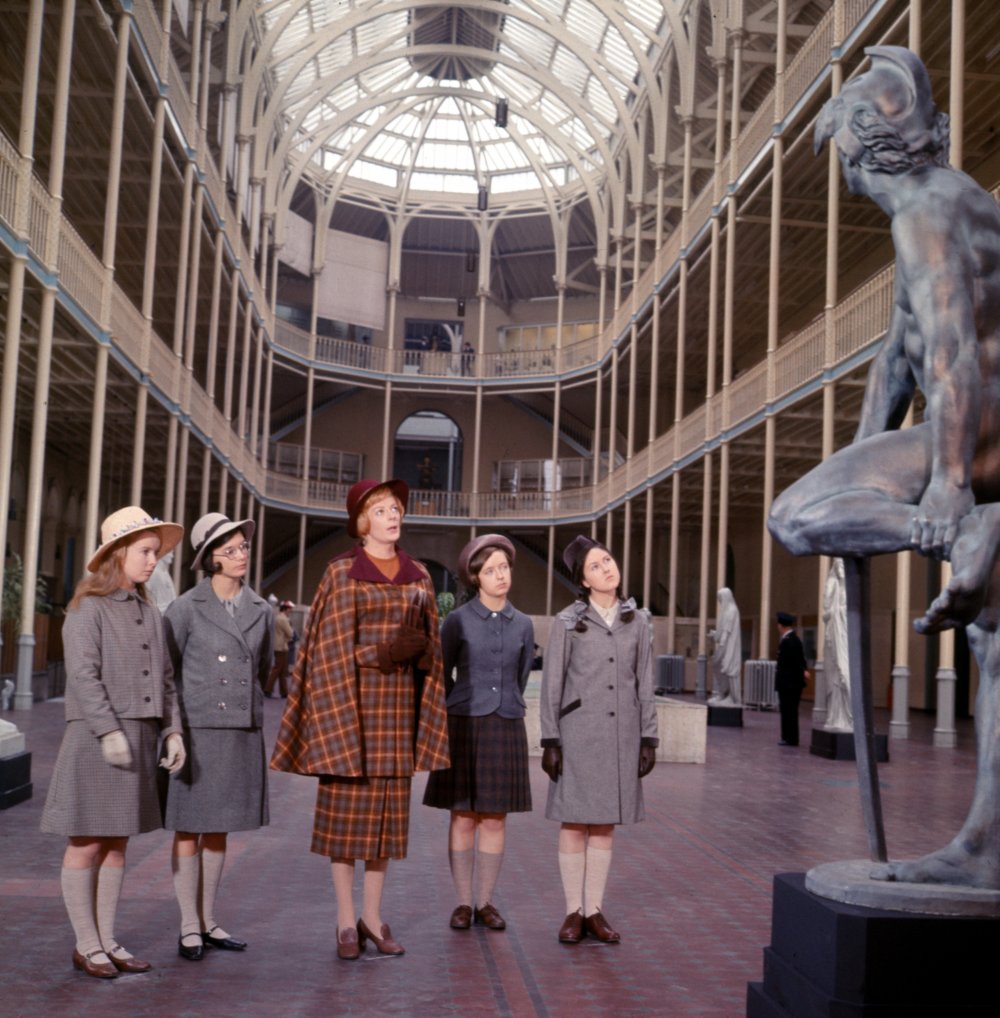 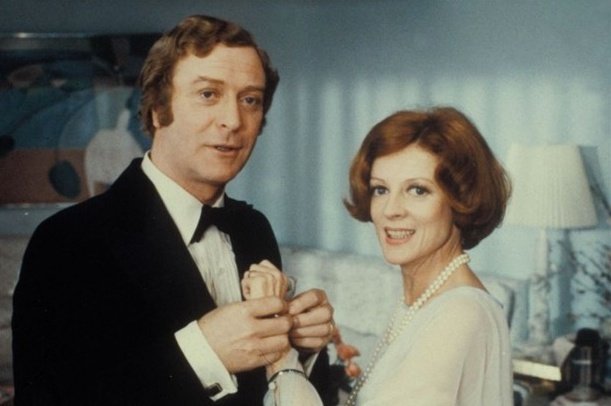 A second Oscar, for best supporting actress, followed in Neil Simon’s adaptation from his own Broadway hit, Plaza Suite. There was a neatly ironic outcome to the story of Maggie’s character, an actress called Diana Barrie, attending the Oscar ceremony and leaving empty-handed. Michael Caine plays her husband, rather daringly, as a bisexual antiques dealer, and they strike fiery sparks alongside Jane Fonda, Walter Matthau and Elaine May. Controversially, Bill Cosby and Richard Pryor play as a couple of accident-prone black doctors. Caine described working with Maggie as a masterclass in comedy acting, and they renewed a happy professional relationship 20 years later on Peter Yates’ ghostly comedy It All Came True. 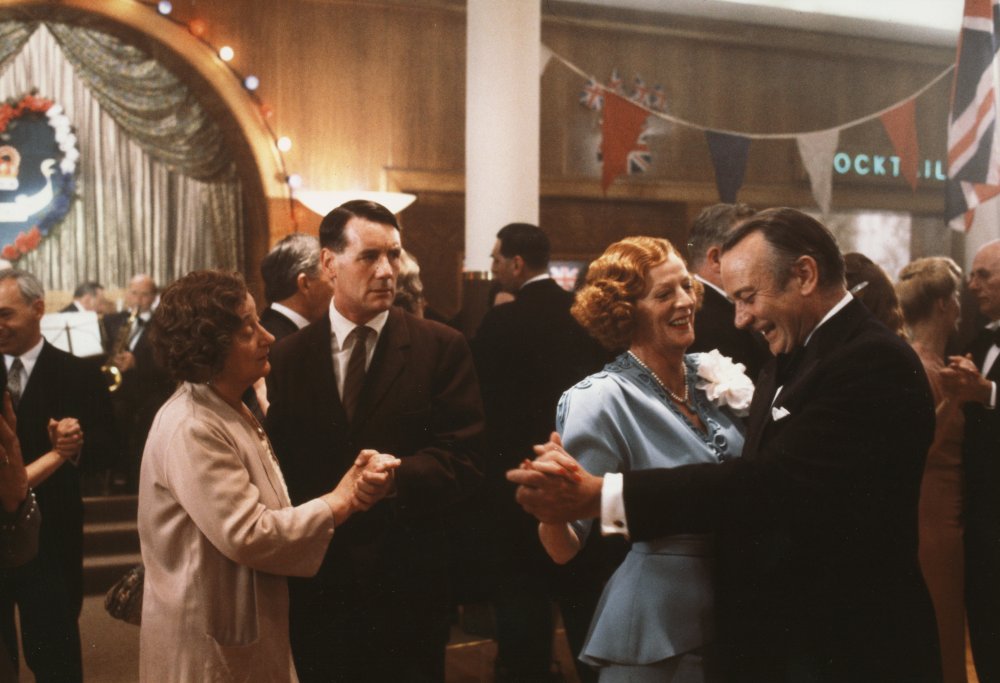 Alan Bennett is one of Maggie’s key writers, and this delightfully acrid film shows them off at their best. Joyce Chilvers (Smith), married to a Yorkshire chiropodist (Michael Palin), instigates a conspiracy to smuggle a pig onto the banquet table to celebrate the Queen’s wedding in 1947. Rationing and rashers are on the menu, and Joyce, the Lady Macbeth of Ilkley, throws caution to the wind with a dry sherry then floors Palin – once she’s squared the local top brass in her devious, socially ambitious meddling – with “Right, Gilbert, I think sexual intercourse is in order.” A great cast includes Liz Smith, Pete Postlethwaite, Jim Carter and Denholm Elliott.

The Lonely Passion of Judith Hearne (1987) 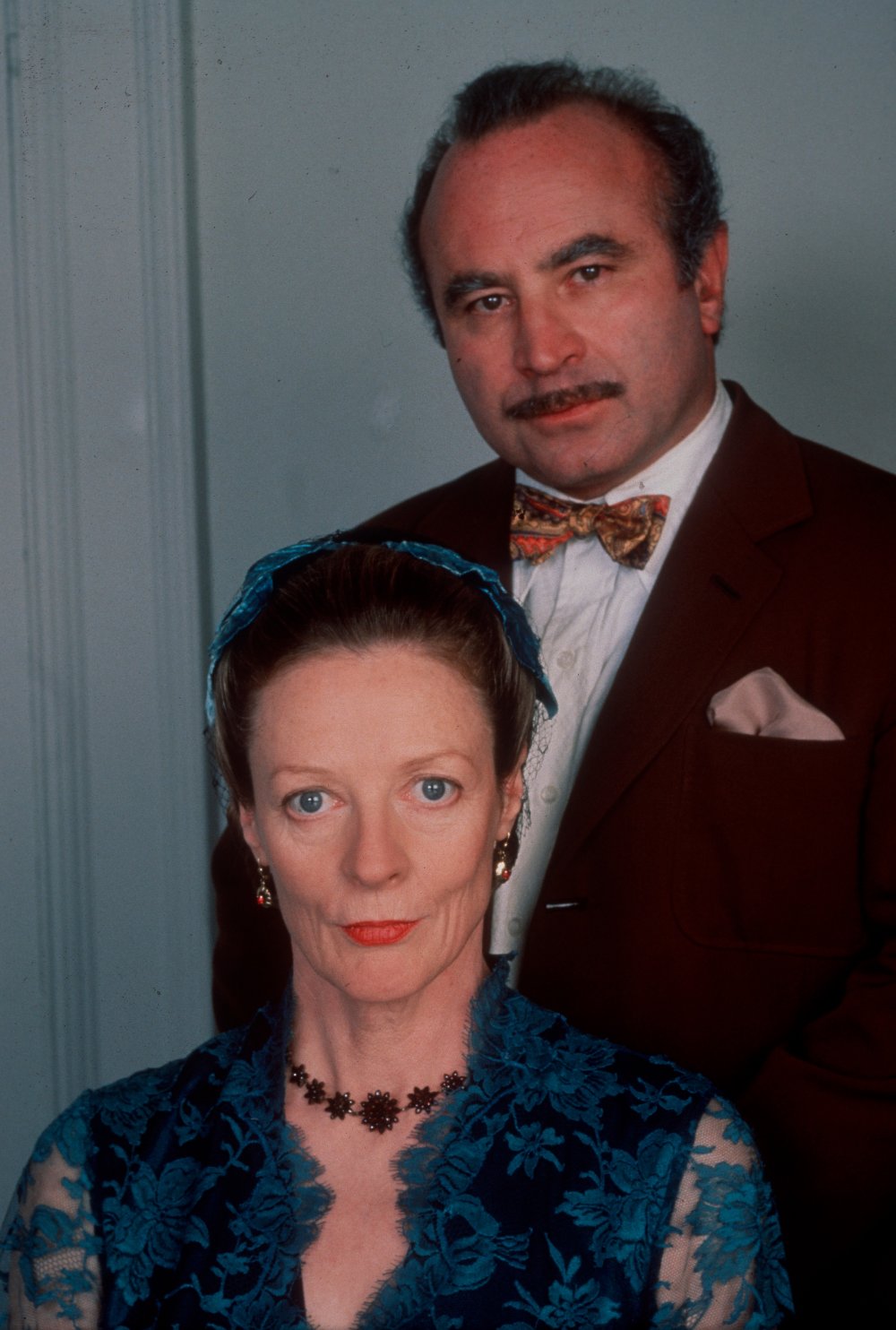 The Lonely Passion of Judith Hearne (1987)

Alcoholic, sexually-undernourished, middle-aged loners became something of a Maggie Smith speciality, and this astonishing performance as a Catholic spinster living at odds with her own sensuality deservedly won her both a BAFTA and Evening Standard award. Brian Moore’s first novel, switched from Belfast to Dublin in a sensitive adaptation by Peter Nelson, offers the actress a tragic intensification of Susan, the vicar’s wife, in Bennett’s Bed among the Lentils. In outline, Judith Hearne – like Joyce Chilvers, a part-time piano teacher with dreams of self-improvement – is as stark and linear as a Modigliani portrait, but the nerves and the pain are almost unbearable; she reveals an inner soul of radiant innocence. The film co-stars Bob Hoskins and Prunella Scales. 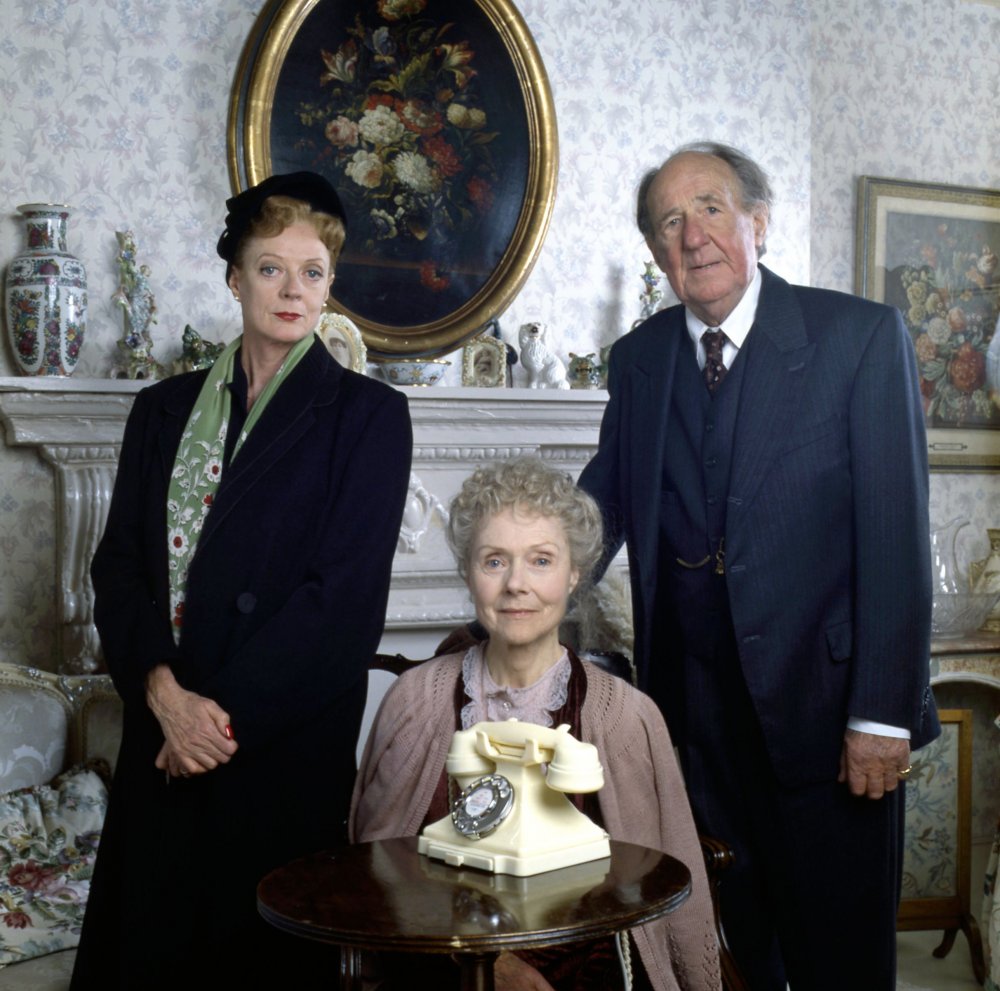 Jack Clayton’s BBC television film used the adaptation of Muriel Spark’s macabre novel he had been trying to set up as a movie for years. It was well worth the wait, Maggie glinting like an anaconda as Mabel Pettigrew, a svelte and manipulative blackmailer among the elderly and infirm around London and on a female medical ward. Spark’s character is 73 years old, but she takes at least 10 years off. She would play another angel of death in her (to date) last West End stage appearance in Edward Albee’s The Lady from Dubuque in 2007. This lady is a glamorous liability in a wonderful cast of seniors including Michael Hordern, Renée Asherson, Thora Hird, John Wood and Cyril Cusack. 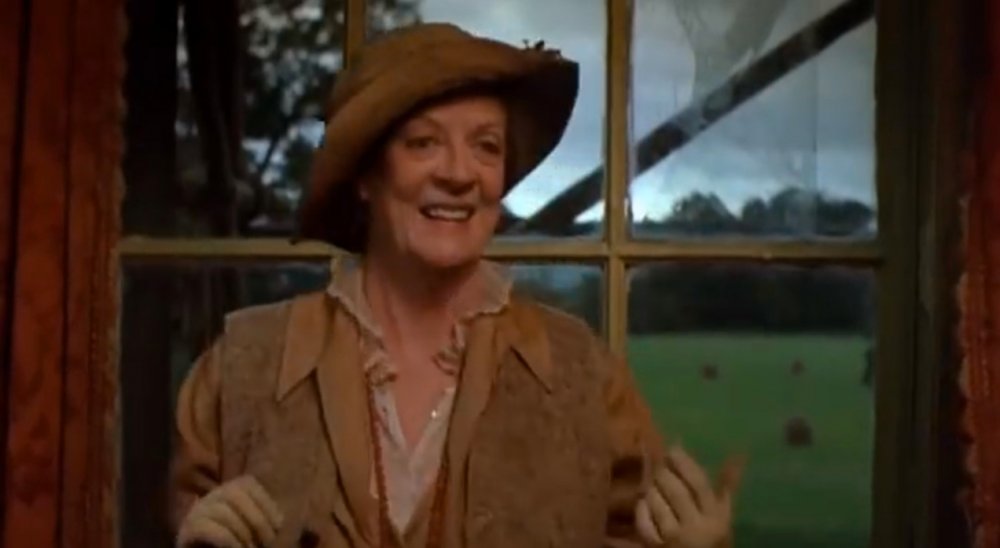 A too little-known film debut by theatre director Deborah Warner, with Maggie as Lady Myra Naylor, an upper-class Anglo-Irish chatelaine in County Cork, 1920, during the dangerous lull between the Easter Rising and the civil war. It’s a beautiful, slightly self-consciously composed film, and beautifully written by John Banville from an Elizabeth Bowen novel. Maggie and Michael Gambon lady-and-lord it over the house guests, who include Fiona Shaw, Jane Birkin and Lambert Wilson, while her orphaned niece (Keeley Hawes) is pursued by a callow, smitten English officer (David Tennant) and seduced by a Republican terrorist (Gary Lydon). 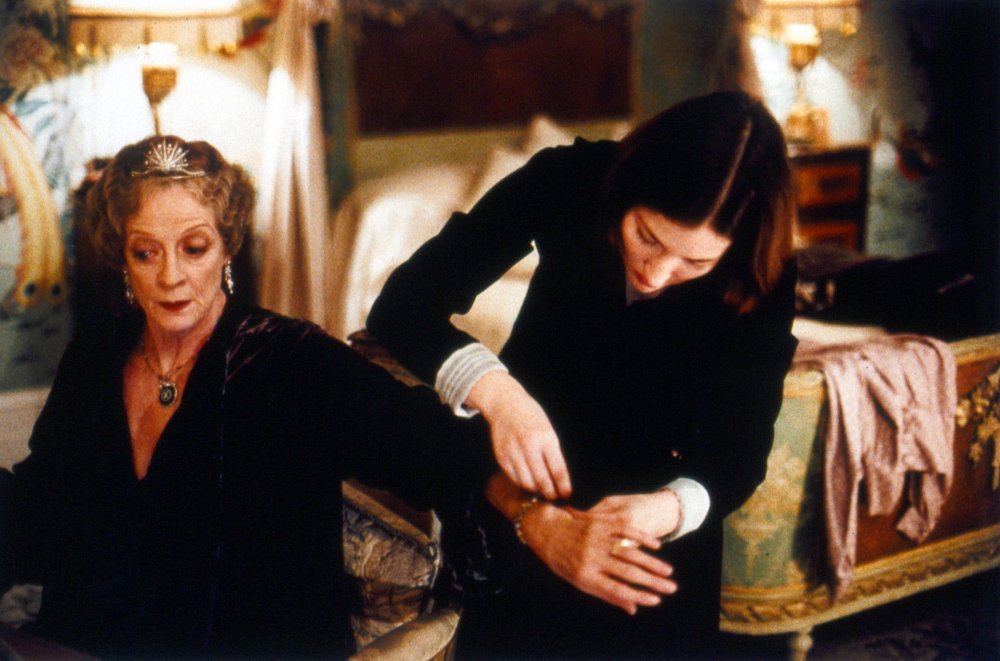 Jeremy Northam as composer Ivor Novello, a weekend guest in this 1932 country house murder mystery, is not exactly consoled over a recent failure by Maggie’s Lady Trentham opining that, “It must be so disappointing when something flops like that.” The Downton dowager is just around the corner. Altman’s superbly orchestrated upstairs-downstairs direction, from an Oscar-winning screenplay by Julian Fellowes, includes not only Maggie but a roll call of other greats – Alan Bates, Eileen Atkins, Helen Mirren, Derek Jacobi – in the servants’ quarters. And the upstairs crowd includes gross and grumpy Michael Gambon, languid Kristin Scott Thomas, bright but boneheaded Tom Hollander and Stephen Fry as a hopeless detective. 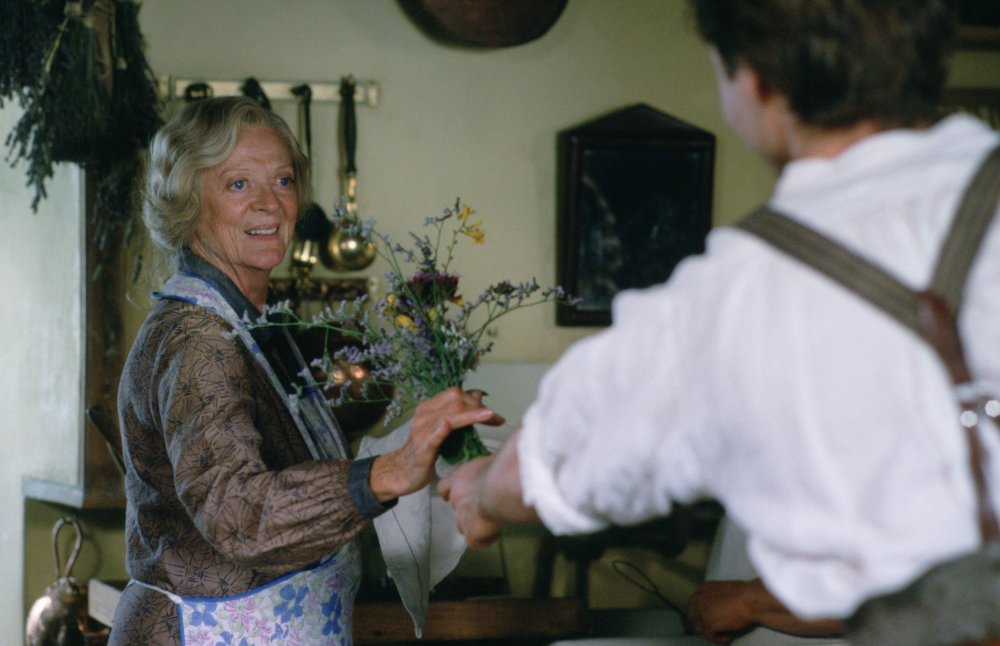 Maggie first worked with Judi Dench at the Old Vic in 1957 and this charming, pitch-perfect period piece is a classic of their acting relationship, as two pre-war Cornish sisters in a fishing village whose lives are transformed by the arrival of a handsome young violinist (Daniel Brühl) in their cottage on the cliffs. It’s also a fine example of the medium-budget British movies Maggie has graced over the past twenty years, with good input from Miriam Margolyes, Natascha McElhone, Freddie Jones (and son Toby) and David Warner. When Dench discovers a rival in her affections for the violinist, Maggie intones acidly, as only she can, “I know it’s not very Christian of me, but I dislike that woman intensely.” 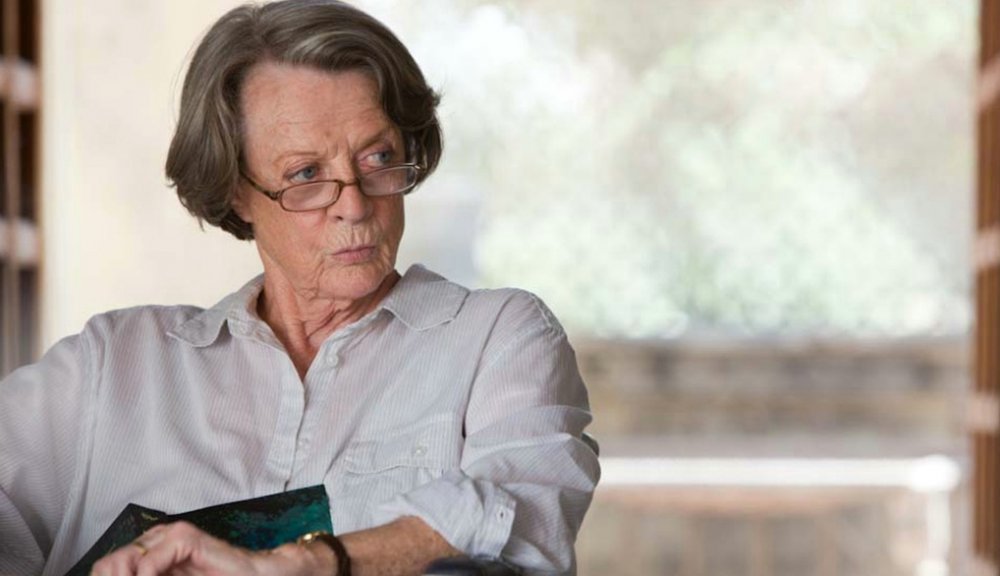 A surprise box office smash – a sequel is on the way – finds Maggie in a disparate group of seniors fetching up in a dodgy holiday hotel on the outskirts of Jaipur. As so often, Maggie – as Muriel Donnelly – provides a voice of aghast scepticism (“If I can’t pronounce it, I don’t want to eat it,” she states tartly on being offered a savoury snack on the bus journey from the airport) but she also travels from grouchy inmate, waiting for a hip operation in a wheelchair, to problem-solving participant in the adventure. By the end, she glows. Judi Dench provides the framing narrative (from a novel by Deborah Moggach) and links up with Bill Nighy on the back of a motorbike.