No two lists of the greatest Disney animated films could ever be the same: each generation grows up with a different era of movies and we all have our memories and preferences. How many of these 10 do you agree with? 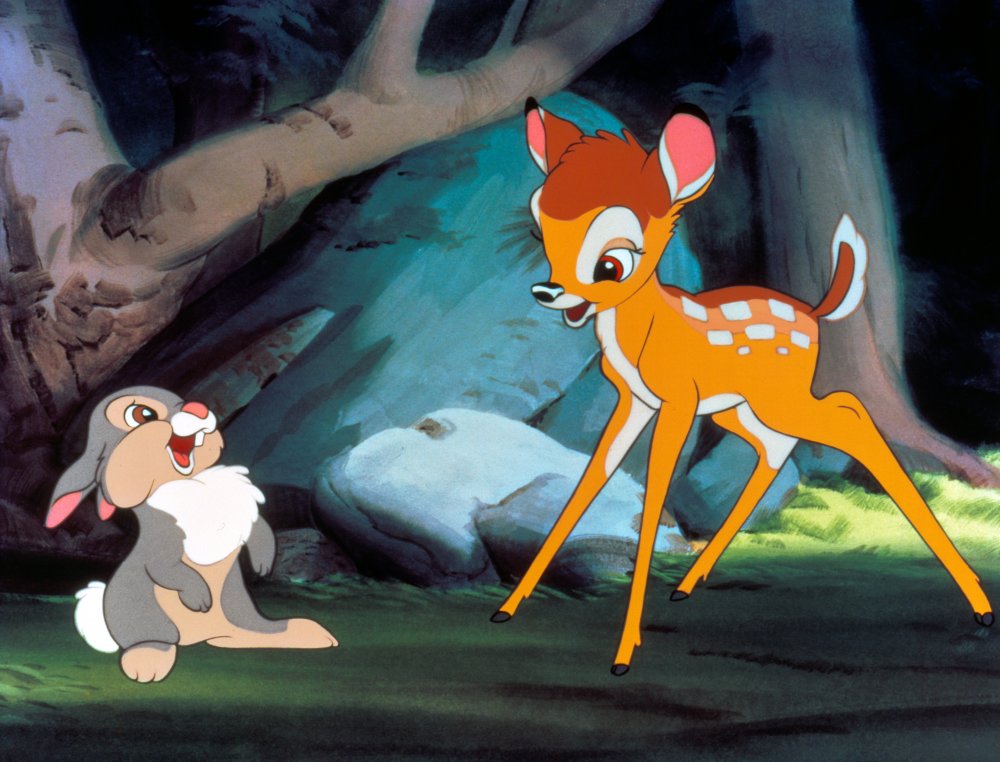 For many of us, the Disney canon is representative of our earliest, formative cinematic memories. The studio’s rerelease cycle (now effectively maintained just for home video releases) every seven years meant you didn’t need to be born in the 1940s to catch the earliest features on the big screen. With the upcoming Big Hero 6 the 54th entry in their roll call of Animated Classics, there’s certainly plenty of choice when compiling a list such as this one.

Of course, unless we took Sight & Sound’s Greatest Films of All Time approach, polling critics and filmmakers alike, no list is ever going to be definitive (and much like the aforementioned, would likely differ vastly from one publicly sourced). The weight of nostalgia hangs heavy – and possessively – over any such undertaking, the films we watched as children tending to maintain a firmer grip than those we discovered (or were released) in adulthood.

A quick pub-survey or two when putting this list together showed both the fervour of individual passions for certain films and the hopelessness of including 10 titles on which everybody would agree. So with just the one person responsible for making the selections below, by it’s very nature this list of 10 ‘best’ is entirely subjective, which as many have already pointed out is perhaps not entirely a good enough excuse for omitting The Jungle Book (1967). But them’s the breaks. 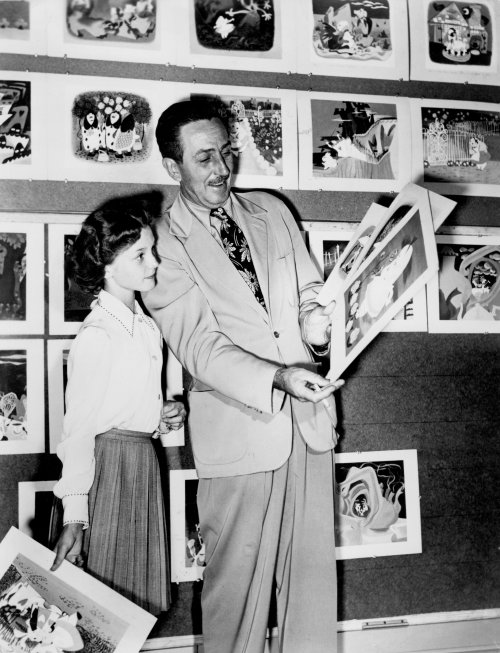 Revisiting the canon almost in its entirety during BFI Southbank’s comprehensive season in 2011 proved an eye-opening experience, with fond memories of first-run viewings (The Sword in the Stone, 1963; The Black Cauldron, 1985) dulled by older eyes, and first-time viewings of later films (The Emperor’s New Groove, 2000; Treasure Planet, 2002) running the gamut between wonder and snores.

What seemed incontestable however, was the power certain images and sequences – some nigh on 80 years old – held over new and old eyes alike; seven crying dwarfs around a glass coffin, or a single line from a stag to his son, “Your mother can’t be with you anymore,” continuing to break even the strongest of hearts.

So here’s 10 of Disney’s best, as chosen by this particular viewer. Sure, The Jungle Book, The Little Mermaid (1989) and The Lion King (1994) went on and off the list more times than I can remember, but in the end there just wasn’t room for everything … And in case you’re wondering, Frozen (2013) came nowhere near. 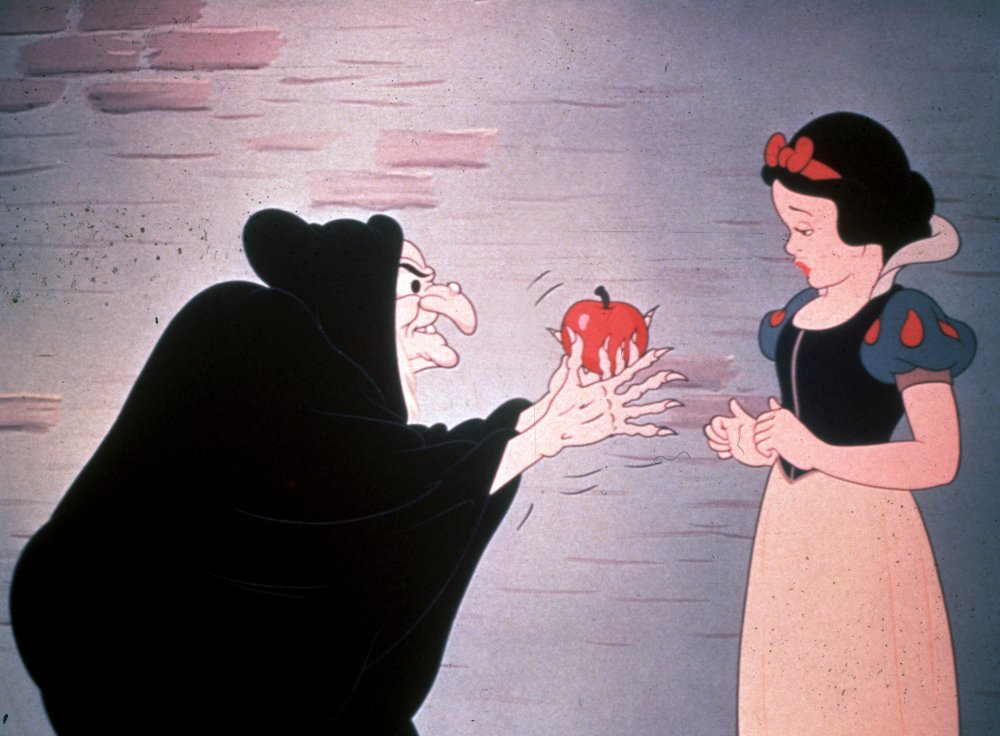 While Disney would go on to refine the formula established here in later years, the historical importance of its first animated feature, Snow White and the Seven Dwarfs, demands its inclusion on any such list. The fairest one of all proved the studio’s biggest risk of all, with trade papers at the time suggesting sight-unseen that audiences would walk out, unable to take 80 minutes of such brightly coloured images.

With a staff of a thousand and a budget swelling to $1.7m over three years, Disney couldn’t afford for the film not to be a hit. Of course, it was a smash, and the pioneering work for all that would follow. It may have been technically bettered – not least in the depiction of humans – in the films to come, but it remains a remarkable feat of artistry and storytelling, instantly quashing Walt Disney’s concern that audiences might fail to empathise with drawn characters. 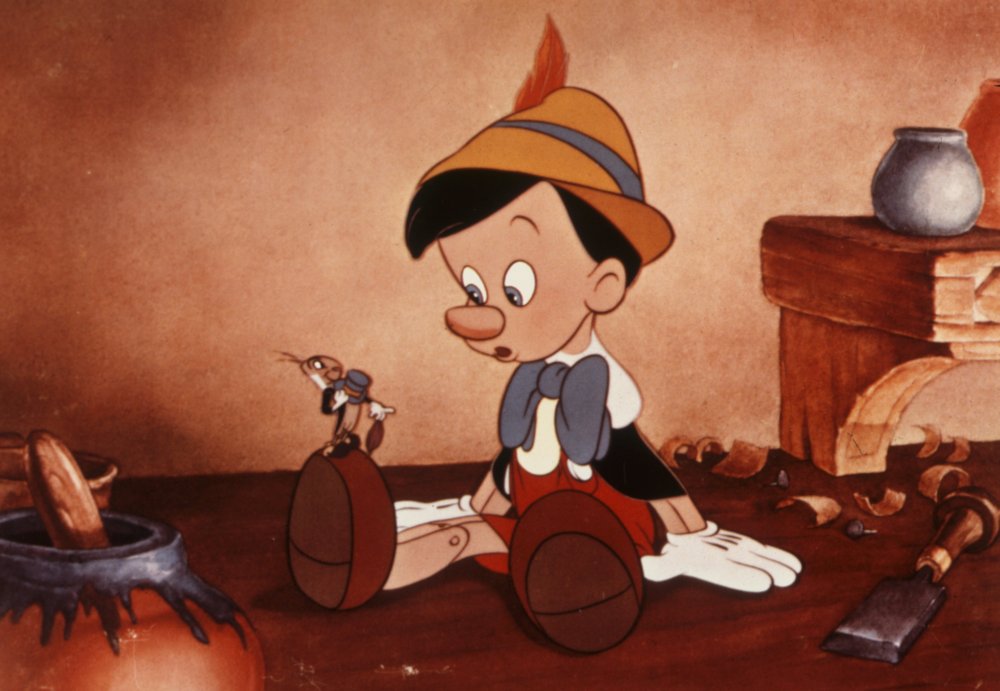 Despite a mostly positive critical reception upon release, Disney’s second animated feature proved a box-office catastrophe on its first run, only going into profit on rerelease. For all its catchy tunes and loveable supporting players, any memory of the film as straightforward morality tale is quickly scuppered in revisiting by the sheer number of perversely dark turns the narrative takes on the way to its not-entirely-happy ending. Pinocchio is granted motive freedom, but little free will – even his conscience is a separate entity – and a puppet without strings remains a puppet.

That the directors use his guilelessness to such traumatically subversive ends – from his initial kidnapping to Stromboli’s stage performances, from Pleasure Island to Monstro’s stomach – proves a subtextual nightmare made text like nowhere else in the Disney canon. It stands as one of the studio’s greatest works, and rightly so, but it’s one hell of a dark ride. 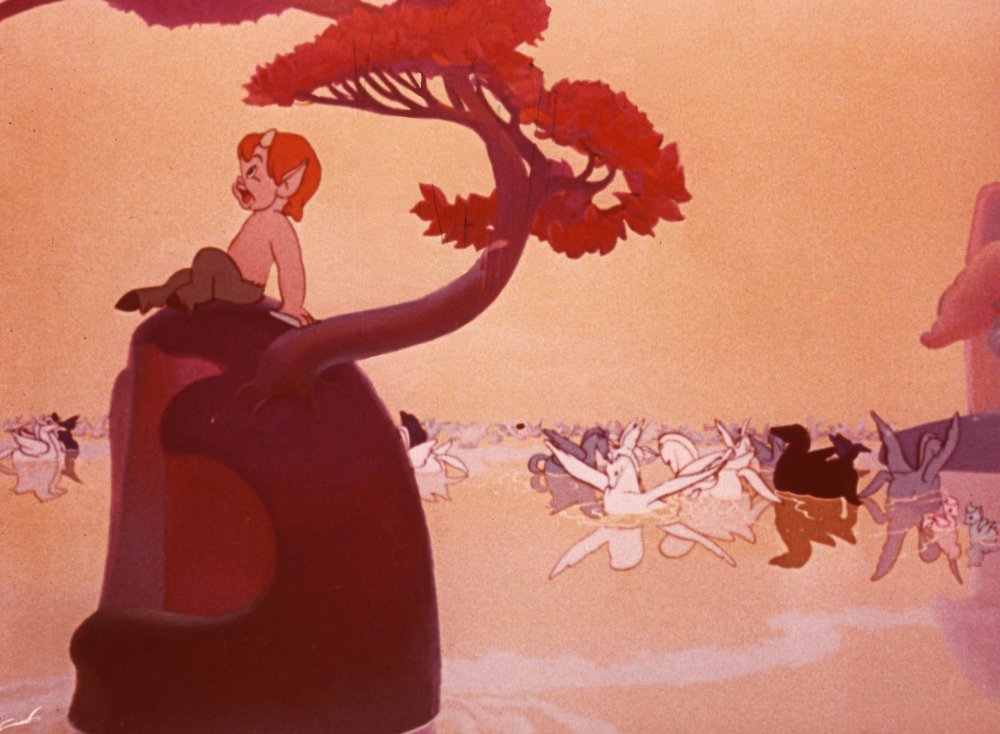 Disney’s most experimental feature-length venture proved a costly failure at the time of release, meeting a decidedly polarised public and critical reception. That it would go on to become one of the most highly revered exercises in ‘pure cinema’ in the studio canon was testament to the pioneering spirit of its founder.

Fantasia consists of a series of vignettes set to classical music, but it wasn’t in the animation department alone that Disney was pushing the boundaries of the medium. A surround sound system known as Fantasound was installed in cinemas for its roadshow run, while the two-projector set-up (one exclusively used for audio) effectively served as the prototype for the stereophonic surround systems employed today.

It may be the iconic turn of Mickey Mouse as the Sorcerer’s Apprentice that provides Fantasia’s most enduring image, but it’s the demonic visual accompaniment to Mussorgsky’s Night on Bald Mountain and its segue into an elegiac finale of Schubert’s Ave Maria that sees Fantasia at its most powerful. 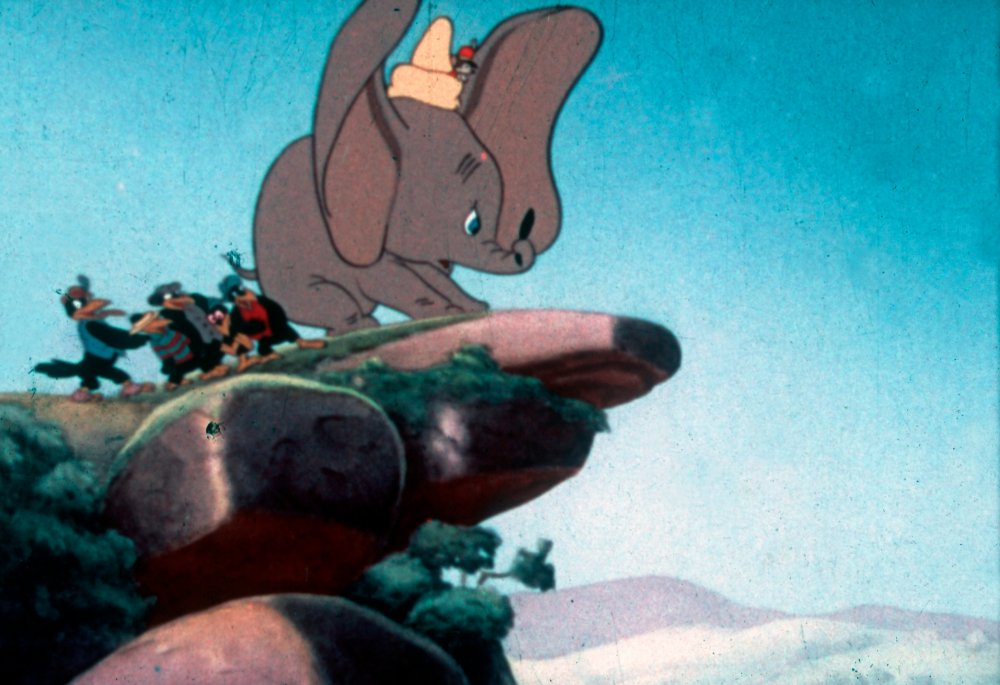 It’s testament to the work of Disney’s story team that despite budgetary cut-backs after the box office disappointments of Pinocchio and Fantasia, the comparative crudity of Dumbo’s animation did little to stifle the power of its enduring appeal. Disney may not have been pushing the boundaries of animation here as he had previously – though the studio still found room for experimentation in the hallucinogenic pink elephants sequence.

Instead, Disney tested the potential of his non-human characters for transmitting an emotional weight like never before. With perhaps the exception of the next film on this list, few films in the canon carry the throat-lumping power of Dumbo’s separation from his mother, or the lullaby sung to him from her cage – both of which serve to make his final, redemptive high-jump from the fiery precipice all the more triumphant. 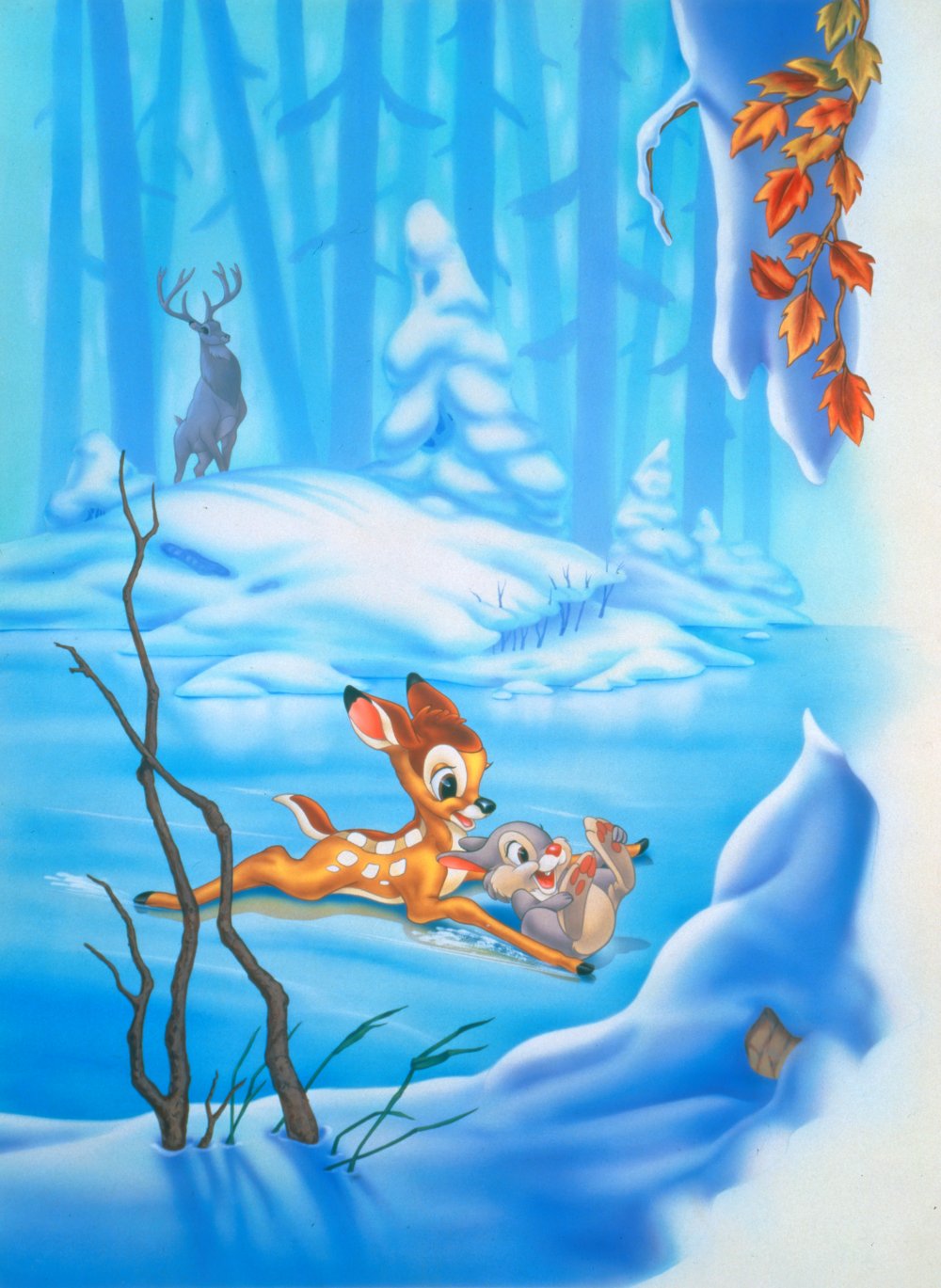 The font of an ocean of childhood tears, Bambi stands as the pinnacle of Disney’s achievement in anthropomorphic empathy and emotion-wringing. It’s also one of the most exquisitely drawn of the studio’s features, the hand-painted, multi-plane forest backdrops rendered stunningly atmospheric.

For all the adorable woodland creatures, Bambi’s lack of condescension in addressing adult themes gives it a vivid sense of realism. From the fighting stags and the blazing fire to that moment when a shot rings out, there’s little cushioning in its presentation of death and the violence of its shadowy human figures. Still capable of inspiring a sense of awe (and wails of despair from its younger viewers), it remains one of the peaks of the studio’s artistic achievements. 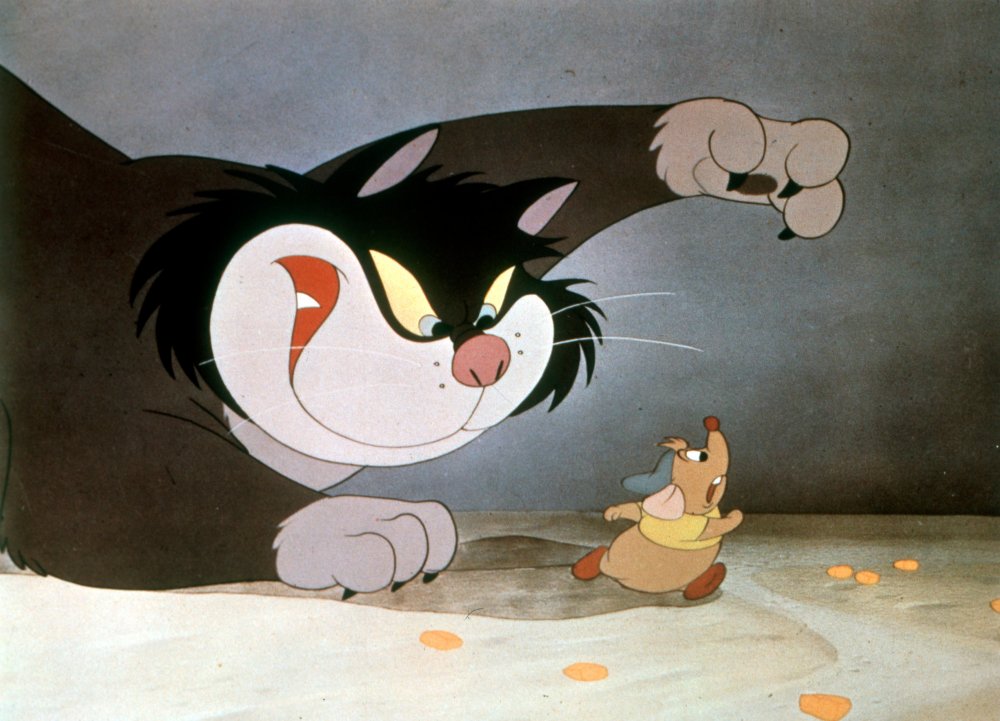 Disney’s quintessential rags-to-riches princess fantasy, Cinderella served as a return to feature filmmaking after the financial difficulties faced during the Second World War. “We need a story with a girl in trouble, that usually works,” said Walt Disney, in need of a hit after the relative failures of Pinocchio, Fantasia and the quickie anthology films released during the war.

Disney had adapted the Charles Perrault fairytale previously, as the last of his Laugh-o-Gram shorts back in 1922. But this new feature version was the studio’s most expensive production to date, with Disney proving his business nous by licensing the film’s Tin Pan Alley musical commissions in-house. The songs’ chart successes cleared debts and paved the way for a broader production slate to come.

It’s the addition of a parallel narrative that provides some of Cinderella’s finest sequences: the animals making the dress; the transporting of a key up a never-ending staircase; the ballroom dance; and, of course, one of Disney’s most charming creations: the rotund rodent, Gus. 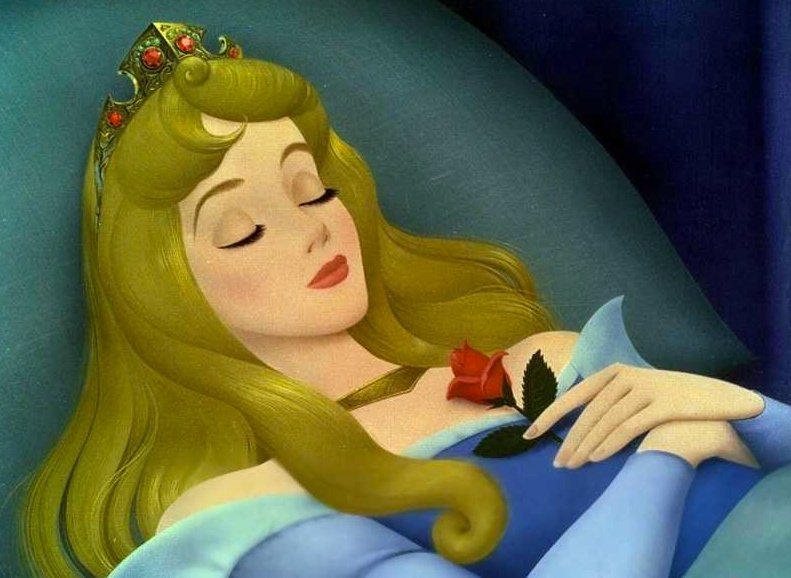 Before the revisionist take on her backstory in Maleficent (2014) neutered her monstrousness, few Disney villains had the iconic sewn-up quite like Sleeping Beauty’s nemesis. Of course, it’s possible – and probably wise – to ignore Angelina Jolie’s demythologising take on the character, especially when revisiting one of the studio’s most visually stunning creations.

Taking its inspiration from medieval art and printed on 70mm film for its release, few animated features fill the screen quite like Sleeping Beauty. It may have proved something of a box-office disappointment on release, but there’s no denying the joys of its supporting cast, good and bad alike. And then there are the set pieces, not least the prince’s final escape from the castle and Maleficent’s dragon, which serves as one of the most vividly realised sequences in the Disney canon.

The Many Adventures of Winnie the Pooh (1977) 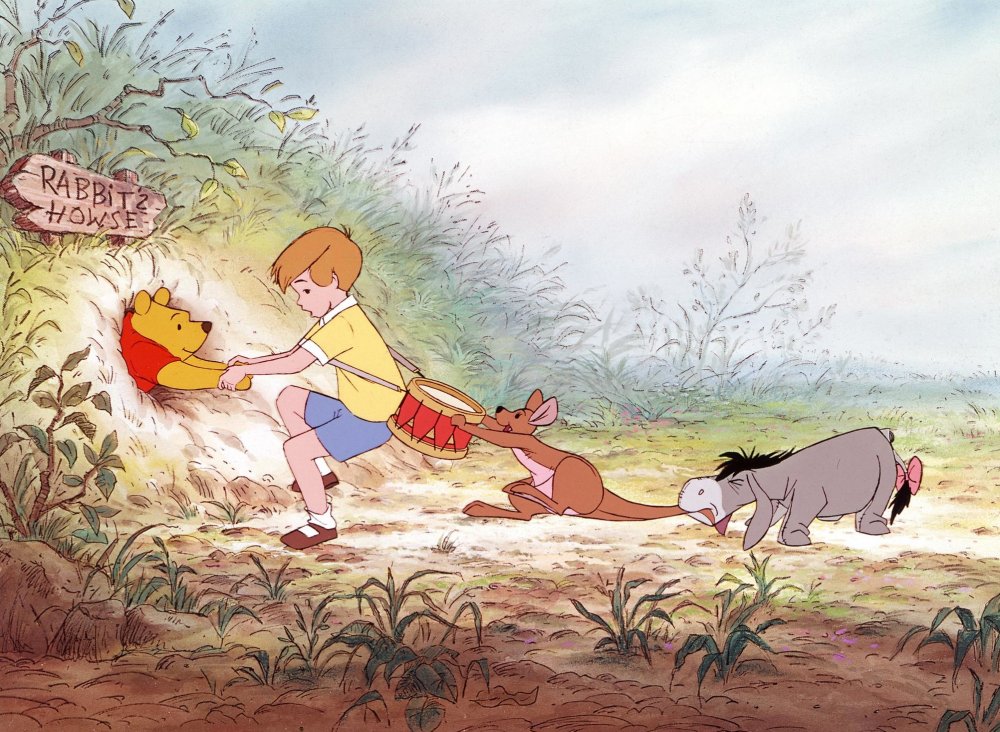 The Many Adventures of Winnie the Pooh (1977)

Of all Disney’s literary adaptations, few retain the flavour of the original text quite like their cinematic imagining of the world of A.A. Milne. Employing a deliciously postmodern flavour (one that would be utilised more emphatically for its 2011 spin-off, Winnie the Pooh), the characters exist within the pages of a book in Christopher Robin’s live-action bedroom. With its heroes climbing across pages and interacting with the printed words – at one point blown right off the page itself – there’s fourth-wall breaking and narrative interruption aplenty across the three shorts that make up the feature film.

For all its gentle charm and kindness of spirit (just watch poor Piglet giving up his home), it’s the perfect voice-casting – something of a lost art these days – that imbues the film with a warmth that makes the Hundred Acre Wood an irresistible place to spend 70 delightful minutes. 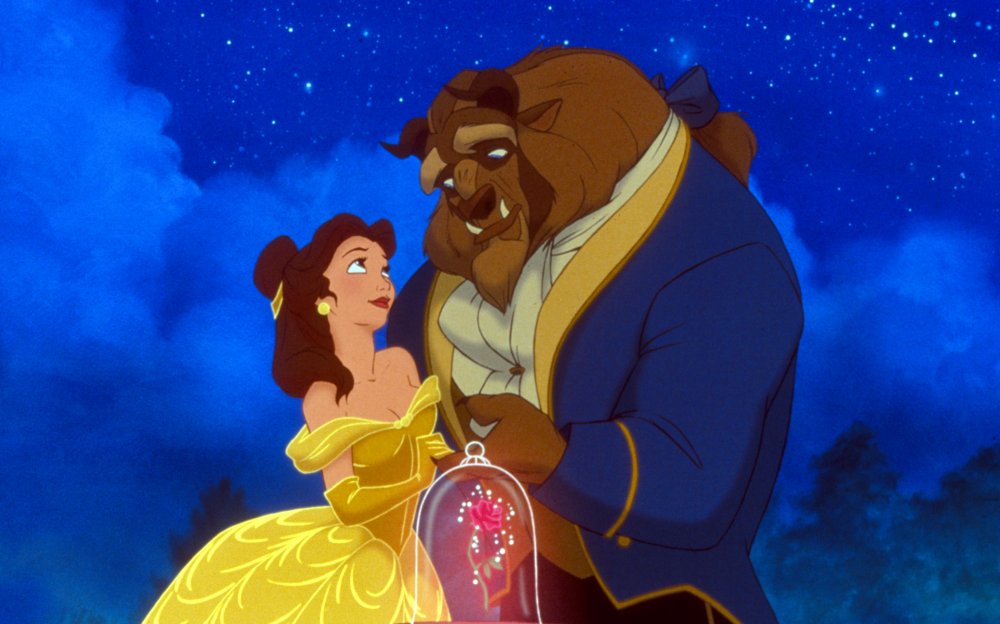 It’s almost impossible to choose between The Little Mermaid, Beauty and the Beast and The Lion King, the three films that represented a renaissance in Disney fortunes after the doldrums of the 1980s. But as the first animated feature to be nominated for best picture at the Academy Awards, this seems as good a choice as any.

Borrowing its peerless musical cues from Broadway under the guidance of Alan Menken and Howard Ashman, and a welcome number of its visual motifs from Jean Cocteau’s definitive telling of the 18th-century French fairytale, La Belle et la Bête (1946), the film pushes all the right emotional buttons. With its deftly sketched characters and pioneering use of CG-animation (first employed by the studio in 1990’s The Rescuers Down Under), it remains a remarkable achievement – an action-packed spectacle, representative of the studio’s finest modern hour. 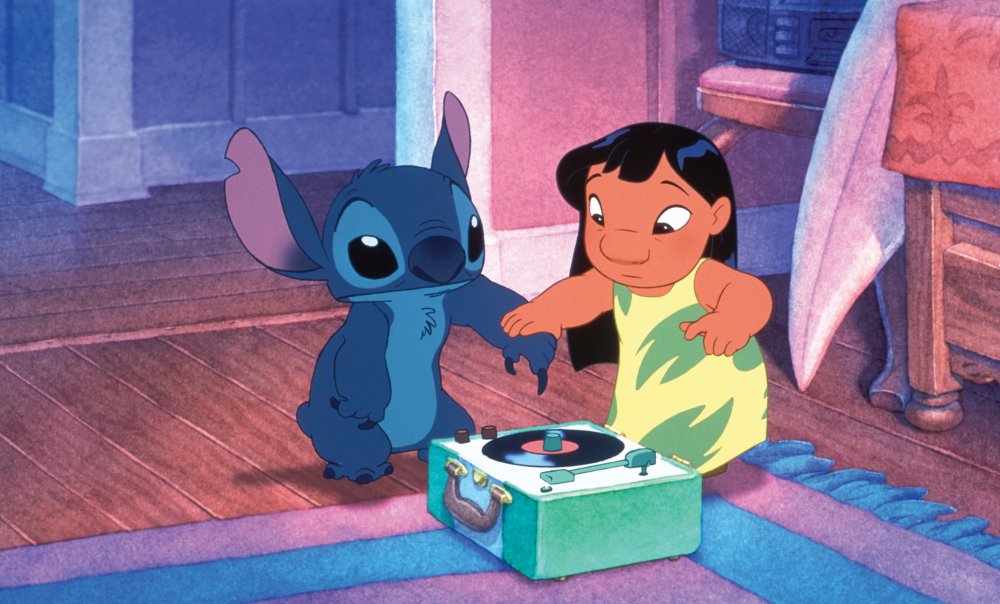 Every list needs an underrated wildcard, and few come as wild as Stitch, the alien biological experiment with anger management issues, programmed to destroy worlds but soon adopted (after being mistaken for a dog) by latchkey kid Lilo when he crash lands in Hawaii.

With its madcap energy tempered by an emotional weight founded in its notions of family, belonging and fitting in, it’s as moving as it is funny. And funny it sure is: with the irrepressible Stitch’s disdain for all but Elvis records and wreaking havoc, it maintains its wittily subversive tone (Stitch effectively using Lilo as a human shield against the bounty hunters on his tail) even as it threatens to tip into sentimentality. That it stays on the right side of schmaltz is testament to a sharp script by directors Chris Sanders and Dean DeBlois, its cultural affection as warm as that for the razor-toothed blue tornado at its centre.