We count down 10 of the greatest performances from the brilliant yet volatile Dennis Hopper. 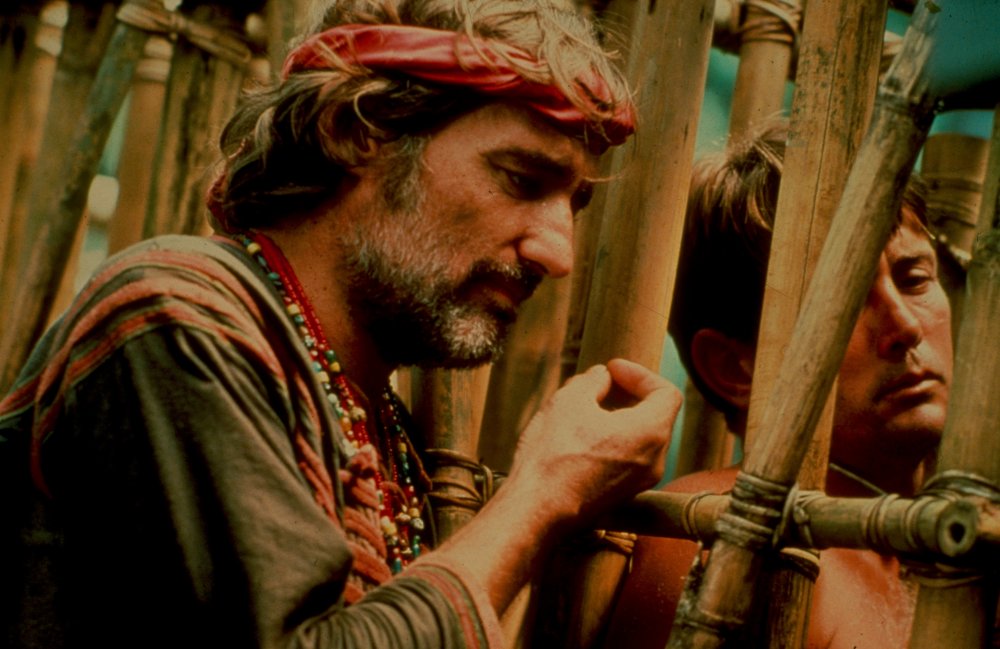 The late, great actor-director-artist Dennis Hopper had a penchant for creative risk-taking – from out-there early collaborations with the likes of Andy Warhol and Roger Corman, to the unqualified triumph of his terrifying turn in David Lynch’s Blue Velvet (1986), via his epochal directorial debut Easy Rider, which was instrumental in kickstarting the American independent filmmaking movement of the1970s.

Hopper’s remarkable career highs have of course been matched by innumerable regrettable lows. His directorial career faltered almost as soon as it started, with obtuse Peru-set meta-film The Last Movie (1971) baffling critics and alienating audiences. Its belated follow-up, 1980’s harrowing family drama Out of the Blue, made distributors nervous on account of its uncompromisingly frank depictions of drug use, domestic abuse and incest, and consequently also sank without a trace at the box office. Both films have undergone significant critical reappraisal in subsequent years.

More tragically, years of substance abuse left Hopper with both a severely tainted professional reputation and significant financial problems. As such, his choice of roles was not exactly always motivated by artistic ambition – for every Blue Velvet there’s a Super Mario Bros. (1993) or a Firestarter 2: Rekindled (2002). But the raw power of his best on-screen work is more than sufficient to obliterate unpleasant memories of these more questionable career moves. Here then, are 10 of Hopper’s very finest feature film appearances. 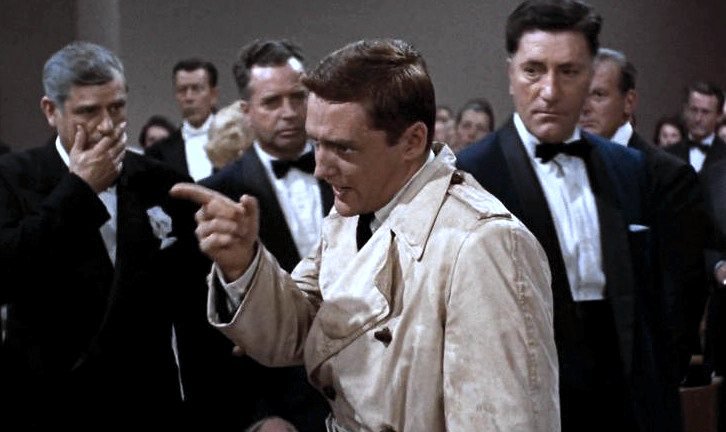 After a bit part opposite James Dean in Rebel without a Cause (1955), Hopper scored a more substantial role in what would be the young megastar’s final film. George Stevens’ sumptuous, epic melodrama about rival oil magnates in Texas is a clear precursor to Paul Thomas Anderson’s There Will Be Blood (2007), with fine performances from Dean, Rock Hudson and Elizabeth Taylor. Hopper holds his own admirably amid such illustrious company, as the son and heir of multimillionaire rancher Jordan ‘Bick’ Benedict (Hudson). The role calls largely for restraint, but Hopper visibly relishes his big dramatic moment, a public confrontation with Dean that swiftly turns violent. 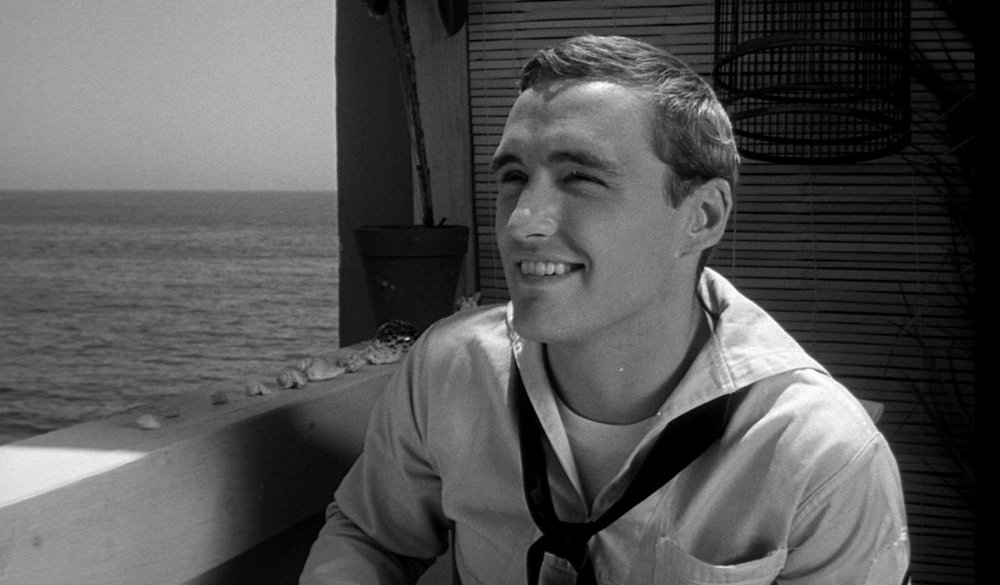 Hopper’s first lead role, in this compellingly bizarre, noir-tinged romantic horror, remains little seen. He plays Johnny, a clean-cut young sailor who falls madly in love with Mora (Linda Lawson), an alluring young woman who believes herself to be a mermaid, and whose previous two boyfriends died in suspicious circumstances. While the film is every bit as unconventional as much of his subsequent work, Hopper’s turn here exhibits no trace of the unhinged showmanship he would later become known for. Instead, he exudes a bashful, naive charm, evoking perfectly the sense of an innocent everyman caught in an increasingly nightmarish situation. For those who remember Hopper primarily as a larger-than-life villain, here’s a potent reminder of his versatility as a performer. 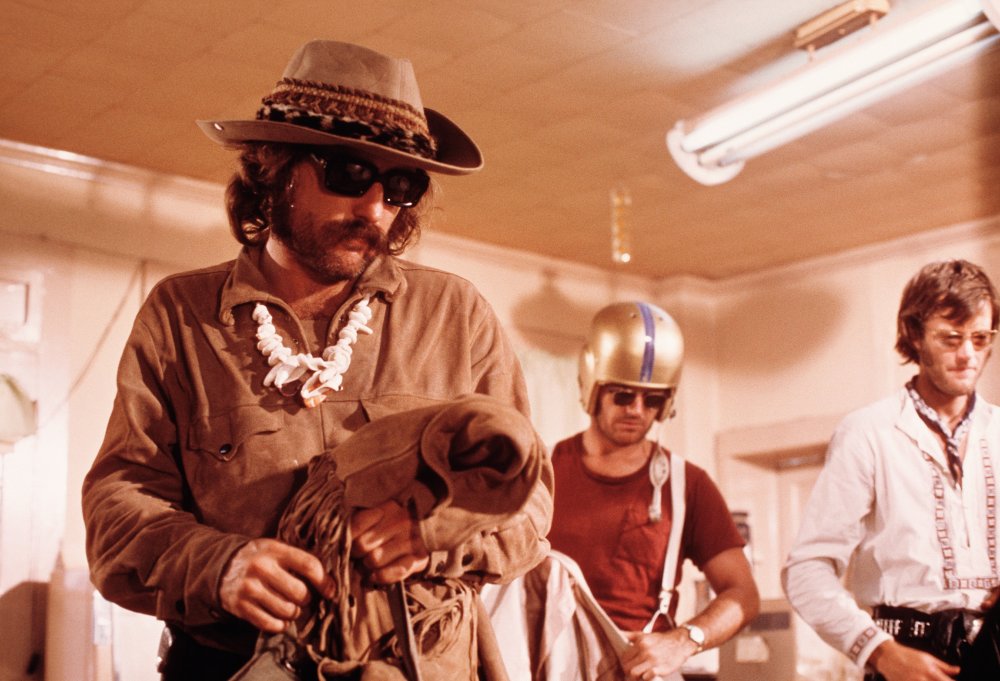 Hopper may have secured his place in film history with his 1969 directorial debut, but there’s no denying it makes for a rather uneven viewing experience. The opening scenes in particular are something of a slog, laden as they are with heavy-handed visual symbolism, and what today feels like stale stoner cliché. But persevere and Hopper’s long-haired drifter Billy becomes a far more engaging screen presence, his seemingly affected jadedness giving way to strung-out paranoia in a manner which is unsettling to behold. The film is also helped along no end by the appearance of Jack Nicholson, whose star-making turn as booze-addled lawyer George brings a welcome dose of humour and kinetics to proceedings. 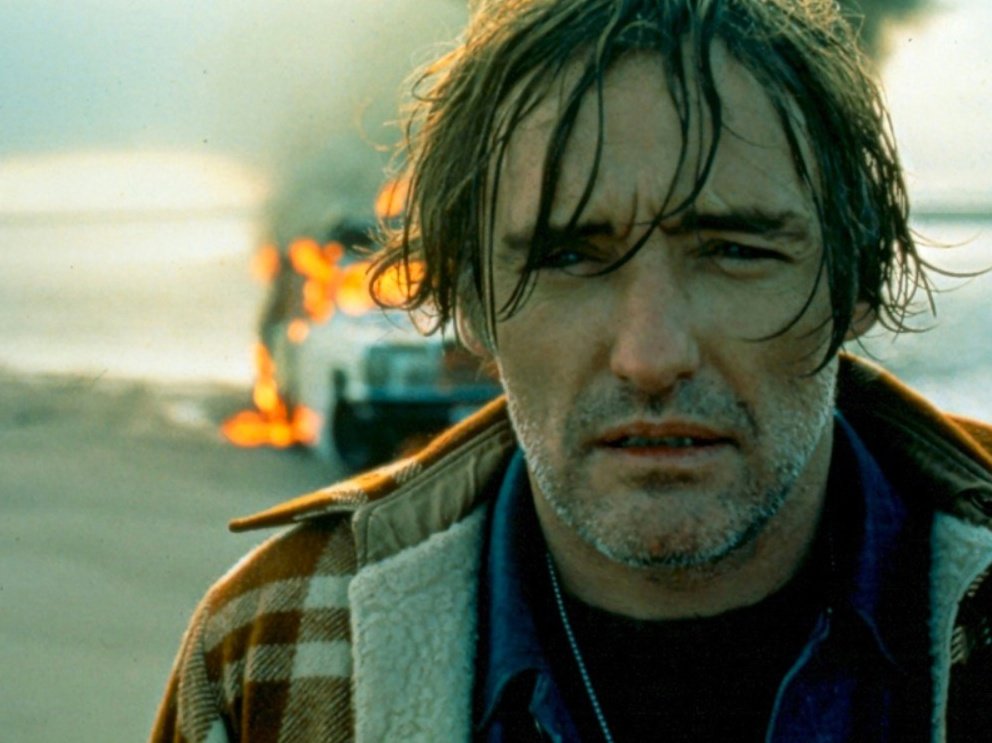 In the wake of his commercially disastrous second film as director, The Last Movie, and with his drug habit spiralling out of control, Hopper cemented his reputation in Hollywood as an unpredictable hell-raiser, impossible to work with. Happily, Wim Wenders saw fit to take a gamble by casting him in this loose interpretation of Patricia Highsmith’s at-the-time unpublished novel Ripley’s Game. Drawing not only on his chaotic personal life, but also on his experience as a painter and art collector, Hopper turns in a beautifully understated, intriguingly ambiguous performance as Tom Ripley, who subtly manipulates a German picture framer (Bruno Ganz, also on terrific form) into carrying out a contract killing. 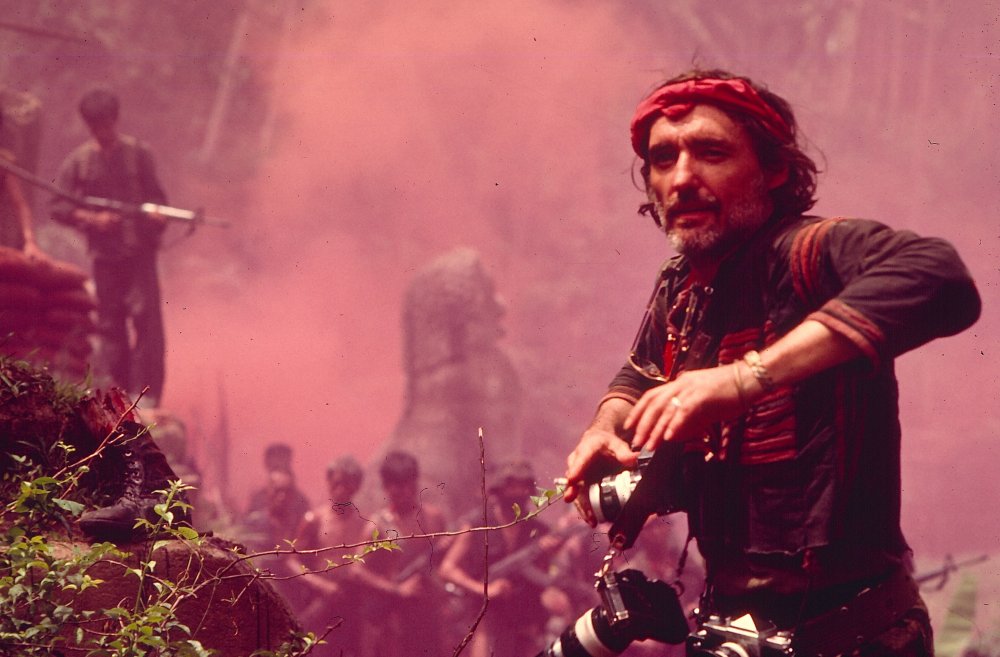 “Dennis Hopper was standing near me. He was telling me how he kills pigs in New Mexico with a .22 pistol and covers them with shaving cream and shaves the hair off.” This might read like an extract from a Bret Easton Ellis novel, but it is in fact taken from Eleanor Coppola’s entirely non-fictional memoir Notes on the Making of Apocalypse Now. Hopper was consuming staggering quantities of cocaine during the notoriously debauched shoot of Francis Ford Coppola’s Vietnam war opus, as one might infer from his crazed performance as a photojournalist-turned-disciple of Marlon Brando’s truly insane Colonel Kurtz. But his turn here is no mere substance-addled pantomime. Like much of his best work as a supporting actor, Hopper brings thrilling authenticity and depth to what might in lesser hands have been a forgettable cameo. 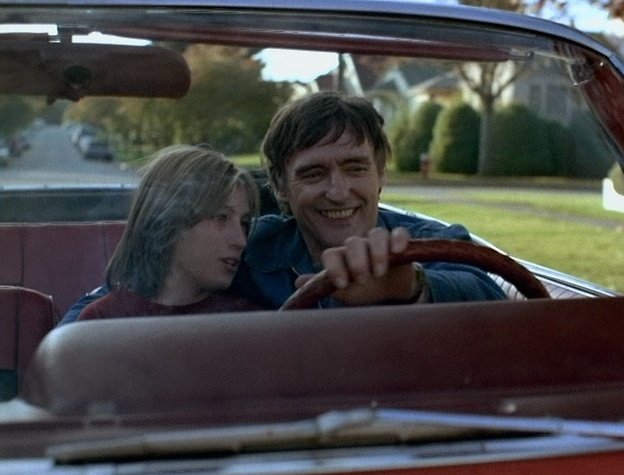 Hopper’s overlooked third film as director is a blisteringly raw, bracingly provocative punk-era drama, about a disaffected teenager (a remarkable Linda Manz) struggling to cope with the misery inflicted on her by her deeply dysfunctional parents. Hopper oozes anger and self-loathing as her deadbeat father, fresh from prison having served time for drunkenly driving his truck into a bus full of schoolchildren. Behind the camera, he establishes a tone of unsettling heightened realism, before ratcheting up the melodrama for a lurid, breathtakingly bleak climax. As a depiction of a blue-collar family in crisis, the film deserves consideration alongside the likes of John Cassavetes’ A Woman under the Influence (1974). 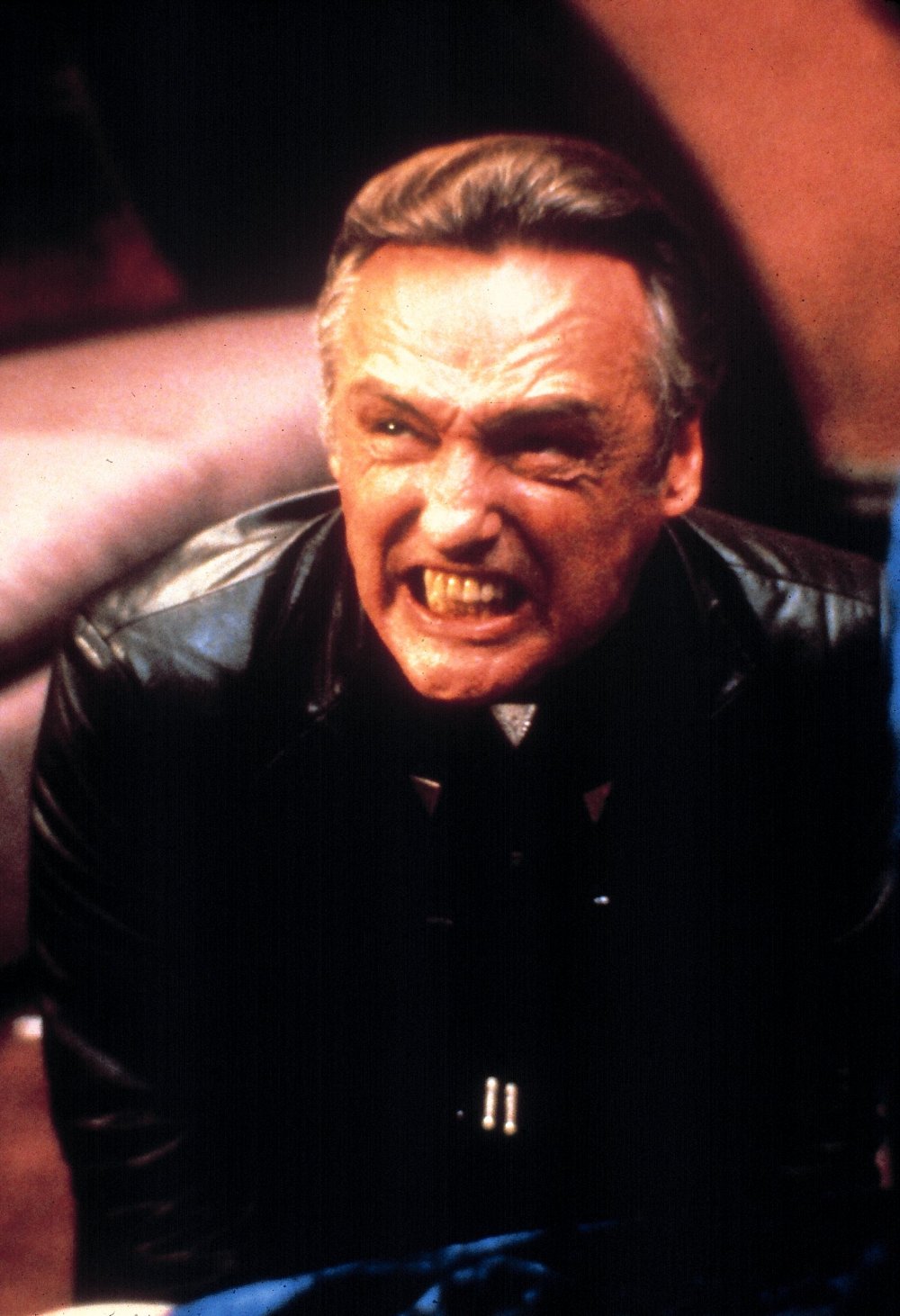 An oft-repeated Hopper anecdote is that, upon reading the script for Blue Velvet, he saw so much of himself in psychopathic sadist Frank Booth that he called David Lynch to demand the part, declaring that he in fact was Frank Booth. In an interview with filmmaker Chris Rodley, Lynch confessed to being somewhat unsettled by how readily Hopper identified with the character: “I was caught in a bind, because I didn’t want to know anybody like Frank. And yet, for the film, I had to have that person.” Of course, Lynch put the needs of the picture before his own trepidations, and the result was one of the most startling depictions of depthless human depravity ever committed to celluloid. 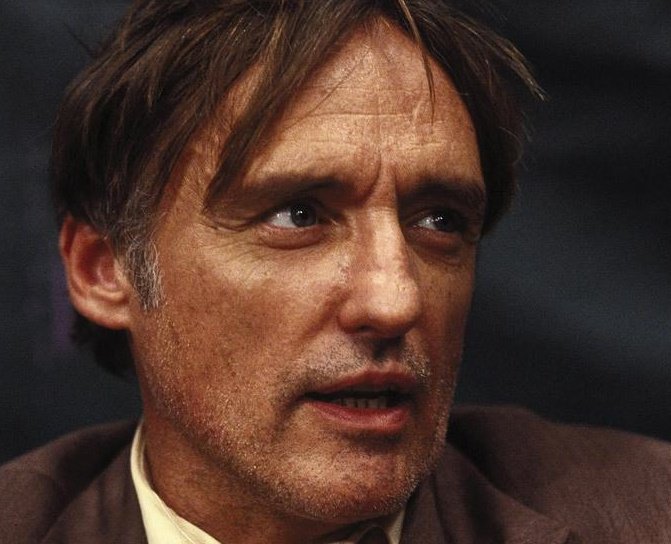 Hopper brings an element of unpredictability and rawness to this formulaic but undeniably affecting high-school basketball drama. He picked up his sole acting Oscar nomination for his supporting turn here as Shooter, the alcoholic parent of a team member who is offered a shot at redemption when invited to assist divisive new coach Norman Dale (Gene Hackman) in his quest to lead the boys to the state championship finals. With years of personal experience of drink and drug abuse to draw on, Hopper imbues the character with a real sense of pathos – it’s painful to watch him stumble around incoherently in public, in view of his mortified son; and deeply moving to see a faint glimmer of hope in his eyes as he summons the courage to take charge of the team in Dale’s absence.

The indisputable highlight of Tony Scott’s romantic crime thriller is Hopper’s grandstanding tête à tête with Christopher Walken, now generally referred to as ‘the Sicilian scene’. Walken oozes menace as mob boss Don Vincenzo Coccotti, on the hunt for a stash of drugs inadvertently stolen by comic bookstore clerk Clarence (Christian Slater). Hopper plays Clarence’s estranged father Clifford, whom Coccotti tracks down and terrorises. But rather than run the risk of being tortured to the point where he might give up his son’s location, Clifford makes an audacious bid to provoke Coccotti into murdering him, by calling into question the purity of his racial heritage. Clifford’s speech is hatefully racist, and makes for profoundly uncomfortable viewing. But there’s simultaneously something deeply moving about his on-the-spot willingness to give up his own life in the vague hope that his sacrifice might save his son. Screenwriter Quentin Tarantino has called the scene one of his proudest achievements. 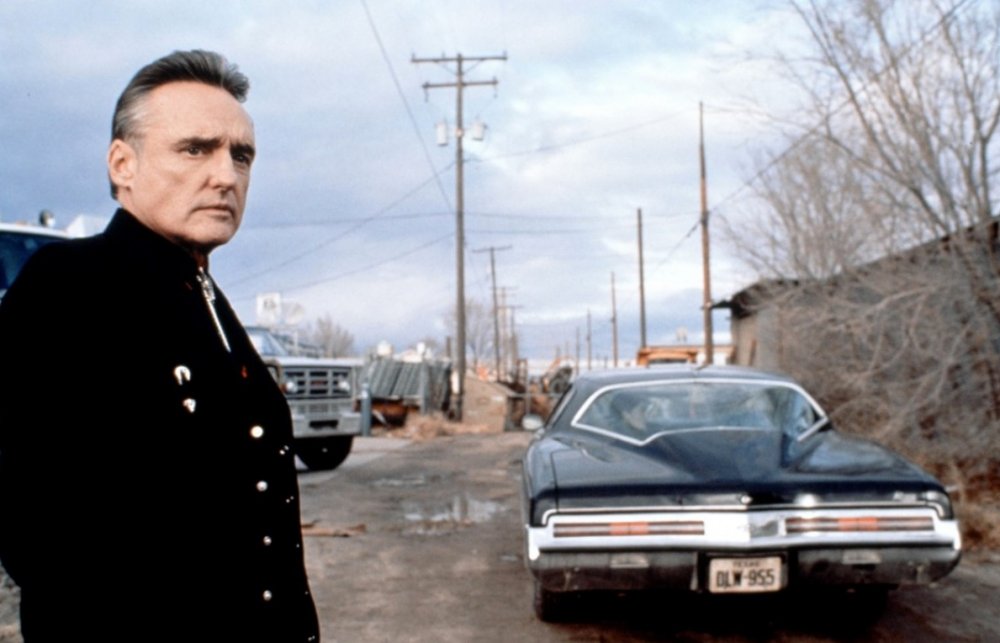 The 1990s saw Hopper establish himself as Hollywood’s pre-eminent sociopath-for-hire, channelling something of Frank Booth’s manic energy, to largely enjoyable effect, in the likes of Speed (1994) and Waterworld (1995). But perhaps the most effective riff on the Booth persona can be found in this criminally under-seen neo-noir western, which borrows elements from the Coen brothers’ Blood Simple (1984), and to some degree anticipates their take on Cormac McCarthy’s No Country for Old Men (2007). Hopper tears up the screen as Lyle, a hitman who is incensed to discover that an imposter has effectively poached his latest contract. The film’s Lynchian vibe is heightened by the presence of co-stars Nicolas Cage and Lara Flynn Boyle, fresh from roles in Wild at Heart (1990) and Twin Peaks (1990-91) respectively.