The latest film by Mat Whitecross is a riotous rites-of-passage drama set against an era-defining gig by the Stone Roses. The director tells us why Spike Island is more than a nostalgia trip. 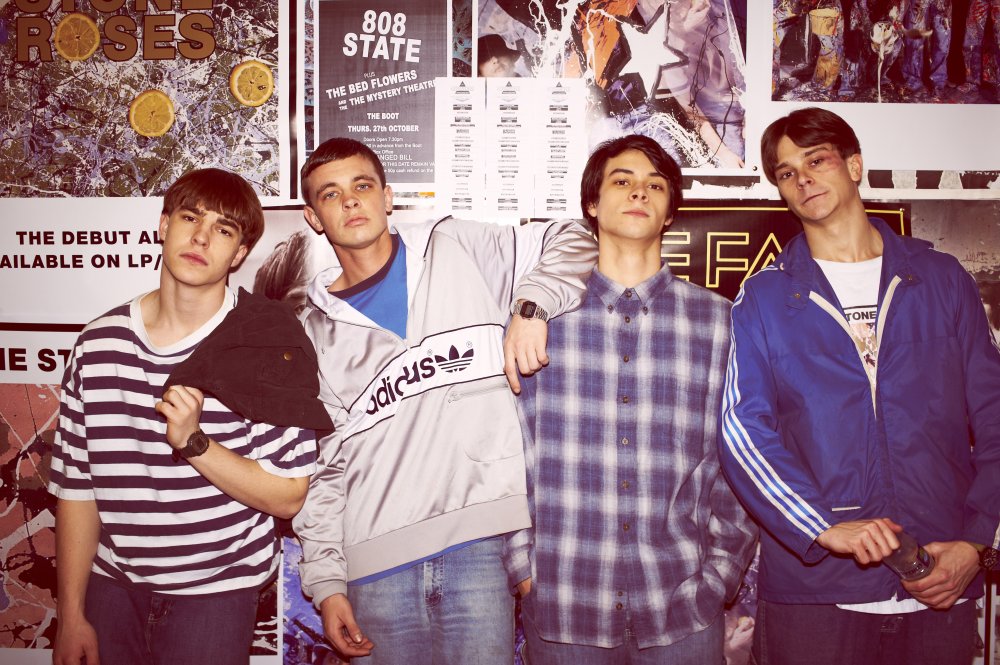 Mat Whitecross’s new film is a nostalgic coming-of-age story set against a special moment in recent British musical history: the Stone Roses’ performance at Spike Island, in the Mersey Estuary, in May 1990. It’s the tale of five Manchester teenagers, themselves wannabe rock stars, who’ll stop at nothing to get into the over-subscribed concert and see their heroes live, perhaps even pushing one of their own demo tapes into Ian Brown’s hands.

Whitecross first made his name directing music videos (for Coldplay and The Rolling Stones among others) and co-directing the award-winning The Road to Guantanamo (2006) with Michael Winterbottom. His solo debut, the 2010 biopic Sex & Drugs & Rock & Roll, met with wide acclaim, notably for Andy Serkis’s performance as Ian Dury. With Spike Island, he’s again documenting our recent pop-cultural past, but Whitecross insists that his new film is only partly about recapturing the energy of its moment. Instead, it’s a universal story of young people grappling with the challenges and excitements of adolescence, and the importance of defining your youthful identity against the things you love. 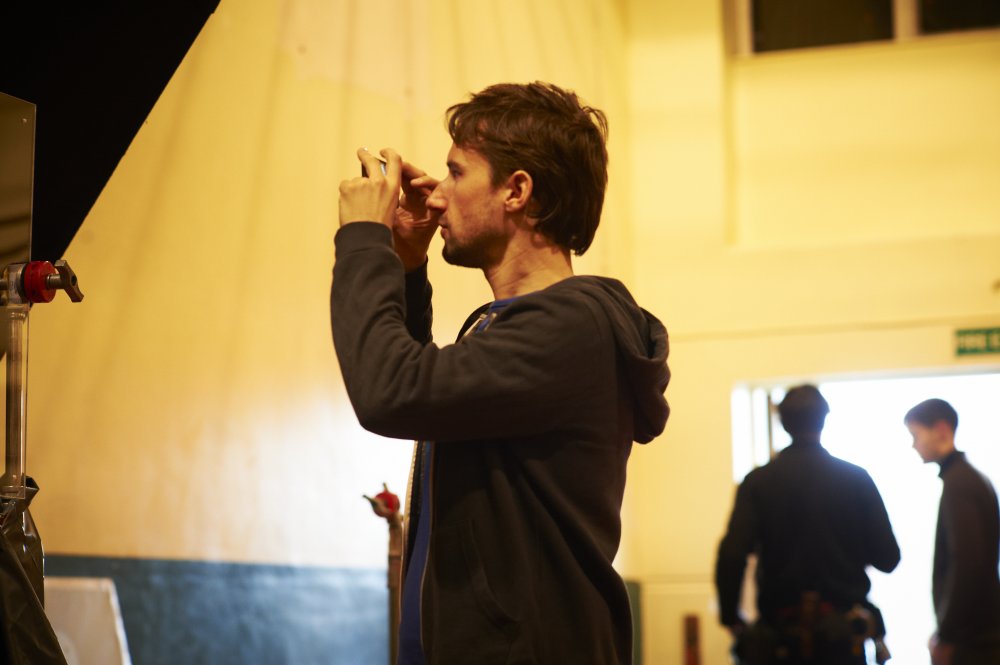 Do you remember hearing about the Spike Island gig at the time, or were you too young?

No, I used to read NME and Melody Maker. I got tuned into the Stone Roses just as they were on the verge of splitting up. I remember thinking What’s all the fuss about?, then tracking down a copy of their first album in the local library and thinking I can’t believe I’ve missed out on these guys. It was all the furore and messiness of their breakup that switched me on to them. That and a few other bands were really the soundtrack for me at university, so weirdly I was being nostalgic for a period that I missed out on. But I knew of them. You can’t really grow up in England and be into your music and not know about them.

Was there a comparable band for you that defined your teenage years?

I grew up in Oxford, so Radiohead and Supergrass were the bands that we used to listen to. There was a place called the Zodiac in Oxford and I was lucky enough to see them both there when I was growing up. Everyone had the demo tapes and the EPs.

The Stones Roses have this particular fanaticism that they inspire in people. The writer of Spike Island, Chris Coghill, has got Stone Roses tattoos. I don’t remember anyone at the time growing up with Radiohead tattoos – it’s a different breed of fan. 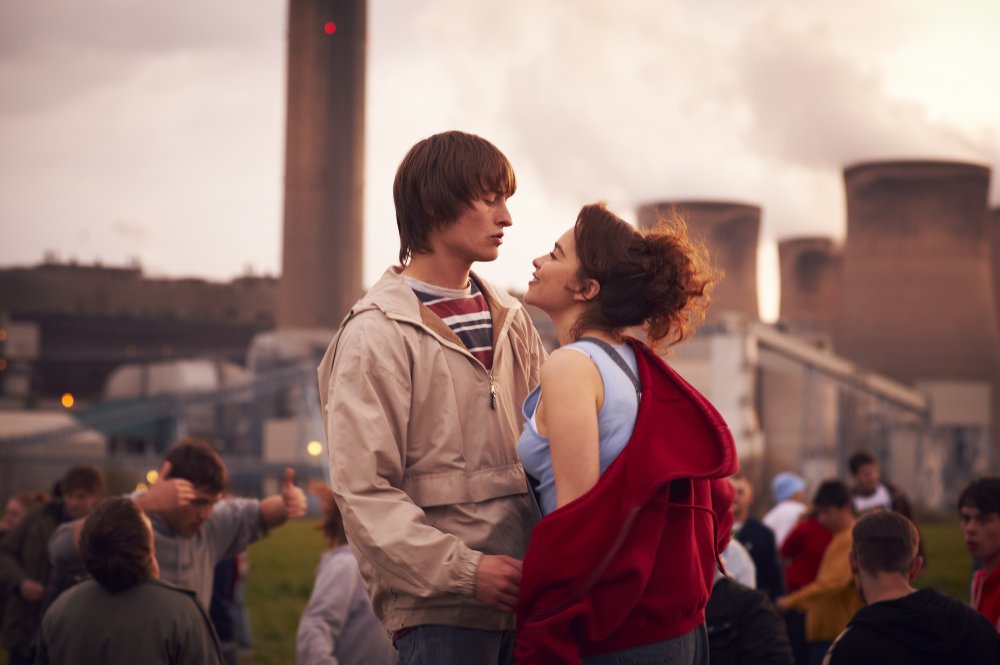 Was it the Stone Roses element that drew you to Chris’s script?

Weirdly it was the music element [in both Sex & Drugs & Rock & Roll and Spike Island] that made me distrust my involvement in them. I thought, Am I typecasting myself here? I’ve made music videos, I get offered a lot of music scripts, maybe I shouldn’t be doing another music film. But in the case of Sex & Drugs, it’s really a family drama; it’s about a man whose public and private personas clash. The music is the cherry on the top of the cake. It could have been that he was a footballer or a politician.

Similarly with Spike Island, I love the Stone Roses but that’s not enough to attract me to the project. But when I read the script I realised it’s actually a nostalgic coming-of-age film, like Mean Streets (1973) or I vitelloni (1953) or Stand by Me (1986). If people love the Stone Roses and that brings them to the drama, that’s great, but that’s not really what the film’s about – it could be inspired by someone’s love of anything, whether they had dreams of becoming a footballer or an astronaut. The music is what they idolise and what they want to be a part of, but that’s not who they are.

Did the actors understand the Stone Roses euphoria or was it all like another age for them?

Actors will play anything. You get them into the audition and ask if they’re a Stone Roses fan and they say “Of course, I grew up with their music.” It’s not till you get on the shoot that you realise that half of them have never heard of the Stone Roses. It’s weird to think that Elliott [Tiittensor, who plays ‘Tits’ in the film]’s mother had been to Spike Island when she was a kid – that puts it all into context. Elliott’s a music fanatic so he did know them, but with the others we put them into a Stone Roses/Madchester bootcamp, where Chris Coghill taught them a lot of the dance moves, we played a lot of the music, we’d send them copies of NME from the time. It doesn’t feel like a period film to me, because it’s still within living memory, but actually it’s just as much of a period film as if you were doing a Regency Jane Austen film. 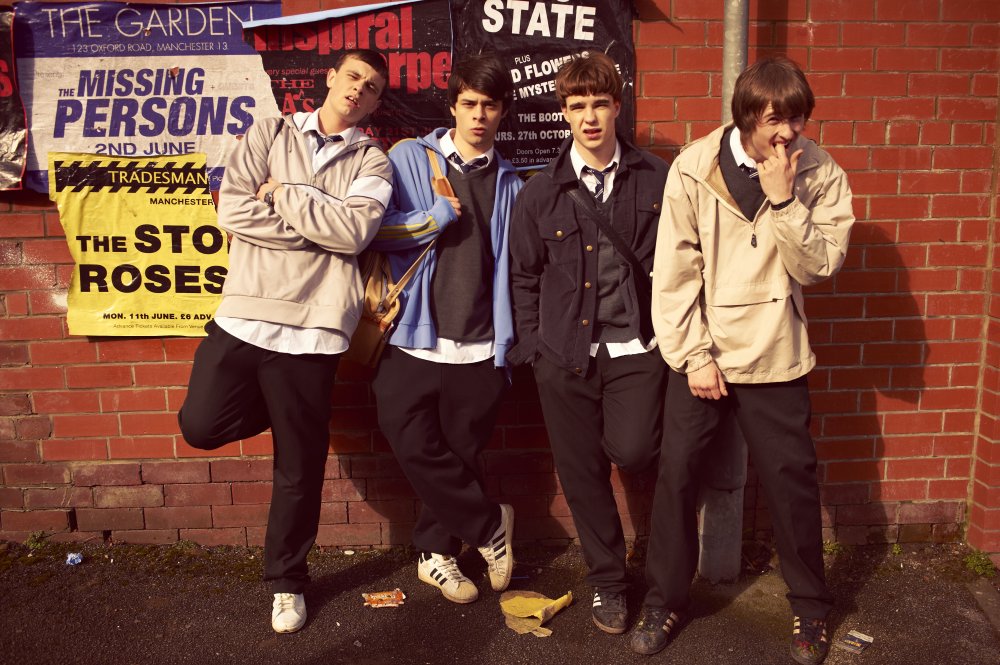 You were able to actually film at Spike Island…

For convenience it made sense to film everything in Manchester. But as soon as we went to the real Spike Island, it just had a different flavour. We’re making a film called Spike Island, and that’s hallowed ground to a lot of people. We realised quite early on, Fiona [Neilson] the producer and I, that we should shoot it in the real place. For the first few weeks, everyone thought we were mad, because when you go to Spike Island it doesn’t seem like that much – it’s a very small patch of ground. But Chris was very careful to get all the logistics of the day right; he’d collated all these different anecdotes from people who’d been there. Trying to recreate it somewhere else, we’d have tied ourselves up in knots. And almost in a superstitious way, we thought let’s try and film everything how it was – there’s something nice about doing that.

Was it difficult to license the use of the Stones Roses’ songs?

That was one of the prerequisites for the project; without the music, we wouldn’t have been able to do it. Fiona talked to the label very early on and got that all sorted. Chris knows a couple of the band members and tagged along almost as a groupie once they reformed; he was going from gig to gig all over the world. There was a strange serendipity to the whole thing coming together, because we found out we’d got the money to make the film the same week that the Stone Roses made their big announcement saying they were getting back together. It felt like the timing was good. 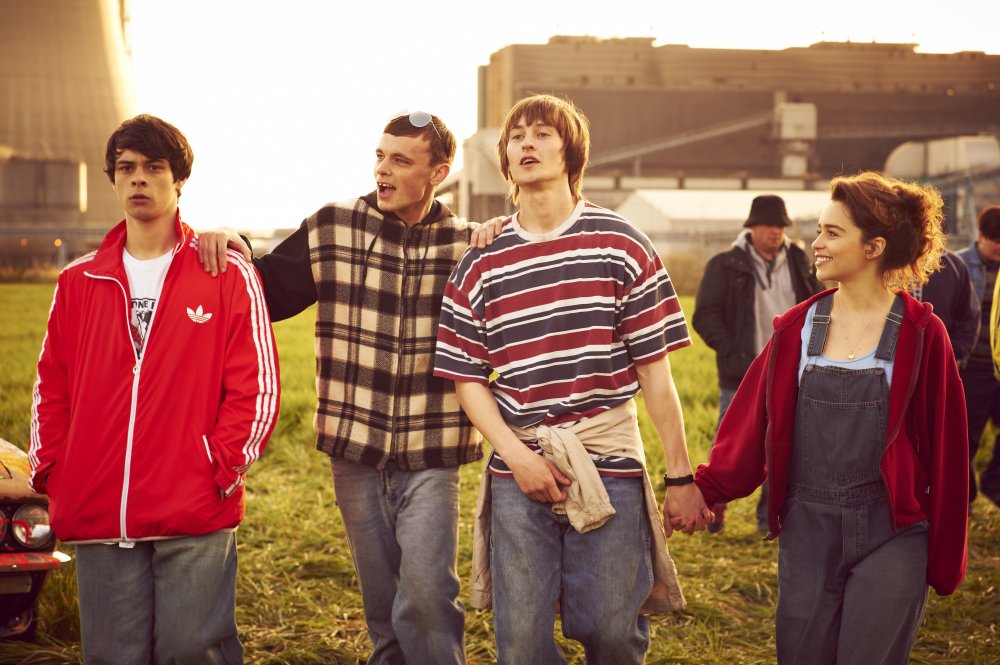 Have you heard from the band about the film? Have they seen it?

The band haven’t seen the film. They’re still on tour. But we want to try and organise a screening for them. I really hope they like it. It’s nerve-wracking because the film and the script were conceived as a love letter to the band, so I hope they take it the way it’s intended.

You’ve mentioned some coming-of-age films that were an inspiration. Did you look at any concert or music films too?

The tricky thing when you’re starting on a film is that you don’t want to borrow from other films directly. We talked about specific gigs that we’d been to rather than films. Obviously there’s been Woodstock (1970), and that recent Ang Lee film [Taking Woodstock, 2009] and films about guys on a mission to see The Beatles – we talked about them but didn’t actually see them, as much as we could we tried to avoid that. The main thing for me was how to make the film feel realistic, but at the same time heightened and somehow seen through that rose-tinted gauze that you have when looking back nostalgically. I like films like Do the Right Thing (1989), like City of God (2002), which feel real and naturalistic but also have a very deliberate colour palette. 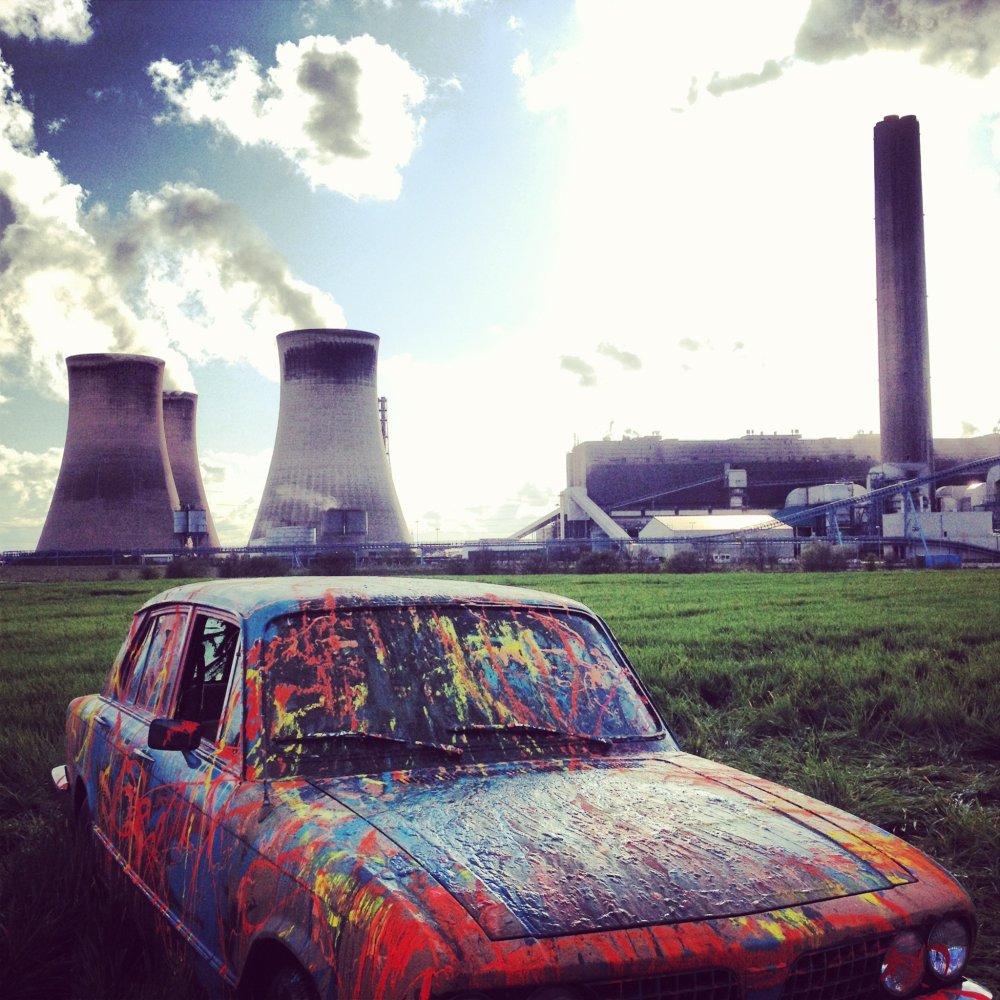 How did you go about recreating the actual gig?

Initially, Chris wrote a version of the script in which you never see the concert. When I was reading it, it felt like a bit of a cheat to me. I could see why he’d done it, to be practical and to write something that could actually get made. But when we talked about it, we said “You’ve got to see Spike Island, it’s so iconic.” The aerial photography from the day is what people remember about it, aside from all the shots people have taken of each other.

I’ve got these [visual effects] guys called The Brewery who’ve worked on all my music videos, they’ve worked with Michael Winterbottom and they’ve just done Eran Creevy’s film Welcome to the Punch (2013). We sat down with them and thought obviously we can’t do a two-hour sequence inside Spike Island but if we can just glimpse it at times at least the audience would feel like they’ve had a taste of it – or if you could see a moment of its reflection in someone’s glasses or the camera soared and you got a sense of the scale of it. So we talked about how we might achieve that.

You always need to have a compelling argument for why people should go and see a film at the cinema, particularly if it’s a low-budget British film and it costs exactly the same to go and see Superman. The thing for me was, if we can just tease the audience with the possibility of seeing it and give them a sense of that scale, then we’ll have justified calling it Spike Island and you won’t feel like you’ve been robbed.

We also shot a lot of stuff outside the gig, at the fences and the burger vans – that’s where we spent our money, [to recreate] the experience of turning up at a festival for the first time. 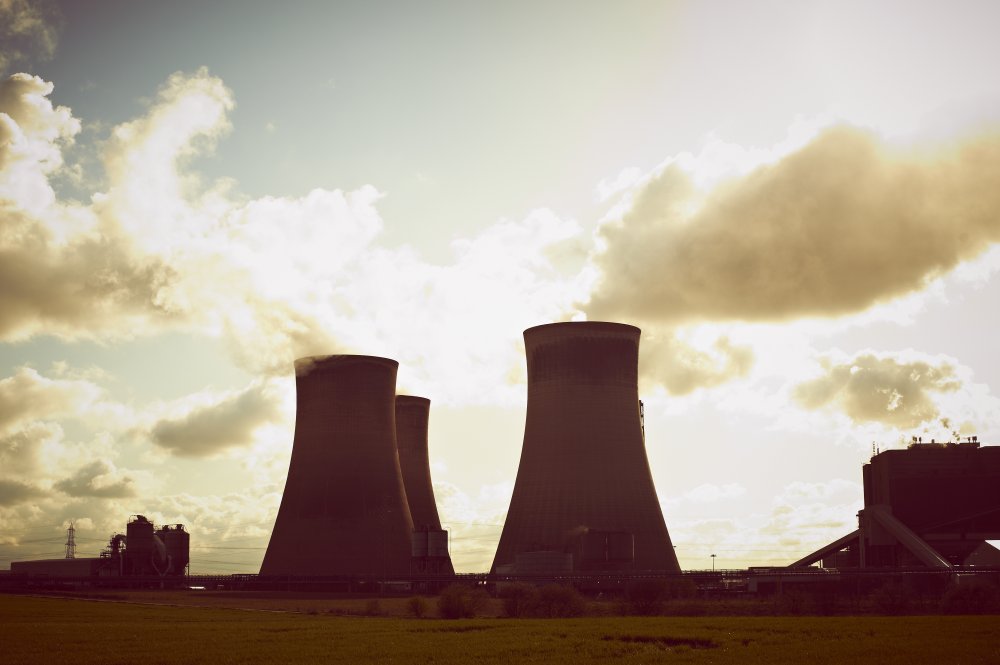 What’s the response to the film been like from people who were actually there? Did you get it right?

The general vibe that we’ve had from people is that we got it pretty accurate. But you talk to people about Spike Island and there’s about as many versions of Spike Island as there are people who attended. There were more than 30,000 people. Some people will say it’s the greatest gig of all time. Some people say the band was never better. Some say the sound was terrible, or it was a ridiculous venue, or there was a 10-hour queue for the toilets and a 14-hour queue for the beer. The one thing that unites everyone is that there was a bizarre, generational bonding force that happened on that day. It seems to have been one of the most important gigs for that generation. But I like the fact that depending on who you were on that day, you’d had a very different experience.

It’s like when someone asks you what your favourite film is, it changes every day of the week. I think ‘Sugar Spun Sister’ is currently my favourite, but it will be different tomorrow.