Spitting Image: still biting after all these years

Thirty years after Spitting Image first hit TV screens, Samira Ahmed caught up with the show’s creators, voice artists and the politicians it lampooned to reminisce about a groundbreaking series that was essential viewing for politicos and couch potatoes alike. 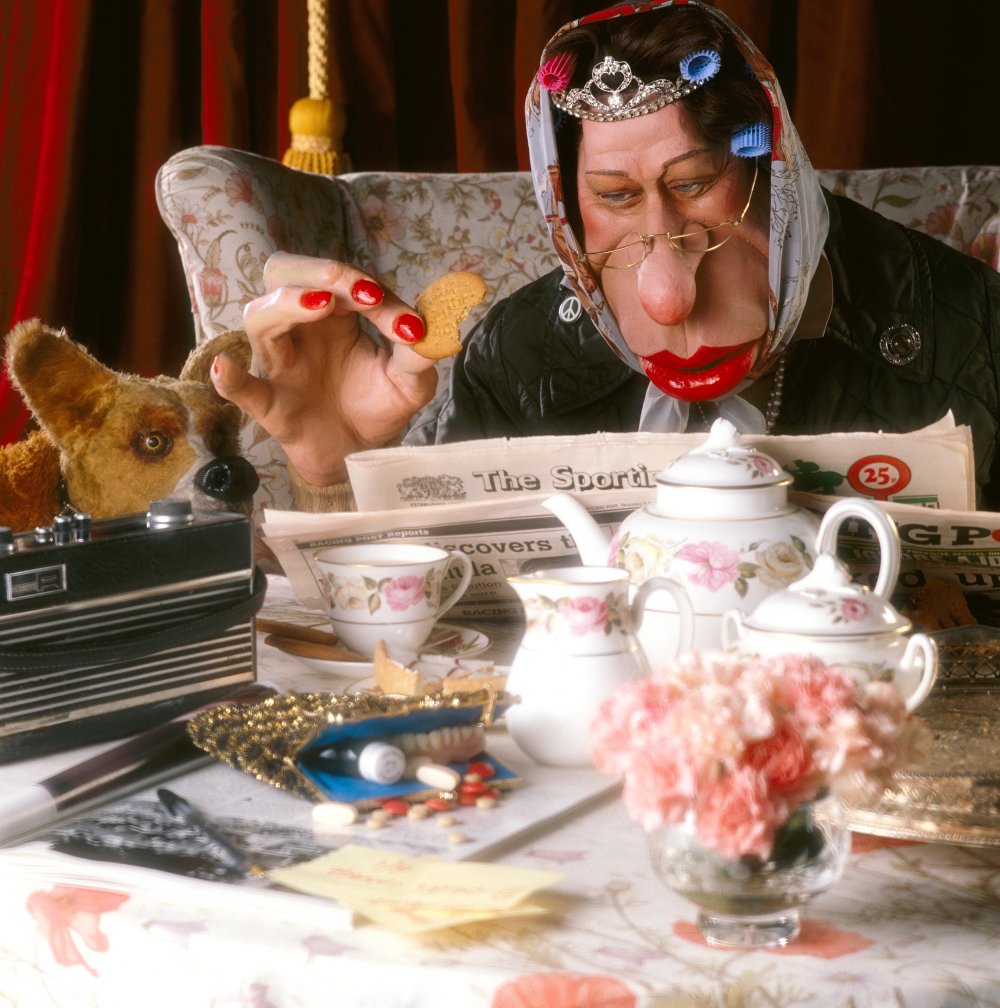 Strikes and riots, braying yuppies brandishing brick-sized mobile phones, slimy politicians with a touch of the undead about them. If we have trouble remembering where 1980s reality ended and TV satire began, then it’s partly because Spitting Image sprawled across its Sundays from 1984, cheering up the bleakest night of the week for audiences of up to 14 million viewers – right through to the end of the John Major years – in all its spit-crusted, wart-studded, latex glory. “Spitting Image’s legacy is the 80s in all its minutiae,” reflects Roger Law now. We covered it so well. By the end we had a thousand puppets.”

“It was the naughty programme for children who stayed up late,” observes actor Steve Nallon, about whose Mrs Thatcher voice, more shortly. “Breathtakingly naughty”, “impertinent”, “mischief” – the words many of its core team apply in recalling the feel of the show. But educational too: “For a lot of young people it put a name to politicians,” says co-creator Peter Fluck. 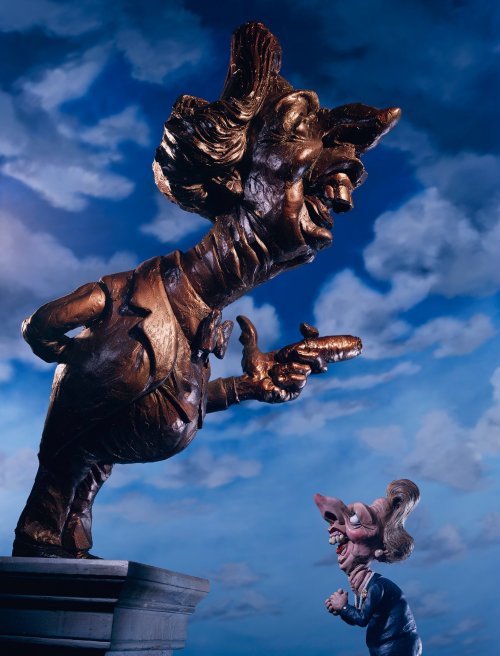 The brief from ITV’s Central TV franchise, according to producer John Lloyd, fresh from Not the Nine O’Clock News, was to be “as topical as That Was the Week That Was, but as dense in ideas as Monty Python.”

The visuals came from artists Peter Fluck and Roger Law’s remarkable partnership. They had been making physically grotesque 3D puppet tableaux for Newsweek and The Sunday Times since the 60s – limited only by the two dimensions of the pages. Both drew consciously on the physical cruelty of the great 18th- and 19th-century cartoonists Gillray and Tenniel. Nallon remembers the influence of Jonathan Swift in a sketch of Thatcher asking why poor people didn’t “just eat their own bodies.” And the Pythonesque sense of fantasy led to many memorable creations: a leather-jacketed Norman Tebbit as a threatening bully boy; Thatcher with a man’s suit and cigar ordering dinner for her feeble male cabinet “vegetables”; the tabloid hacks of the Murdoch press as pigs in trenchcoats.

Fluck and Law’s original vision of half an hour of hardcore political satire rated very badly with audiences and they both say John Lloyd established rules that worked. More of a mix of celebrity and sports stars. “No sketch more than a minute,” recalls Law. “Except John Major and his wife who would eat peas for three minutes because they were so boring.”

“It took quite a long time for writers to wise up to the fact that puppets had limitations,” says Peter Fluck. “They’d write Norman Tebbit jumps on motorbike.” The number of writing and voice talents who developed their skills on Spitting Image is still remarkable. They include Steve Nallon, then a 22 year old, fresh from an English and drama degree at Birmingham University, who applied an academic rigour. He developed an almost symbiotic relationship with his most famous subject, Prime Minister Margaret Thatcher, by listening to tapes of her in rowdy parliamentary proceedings. 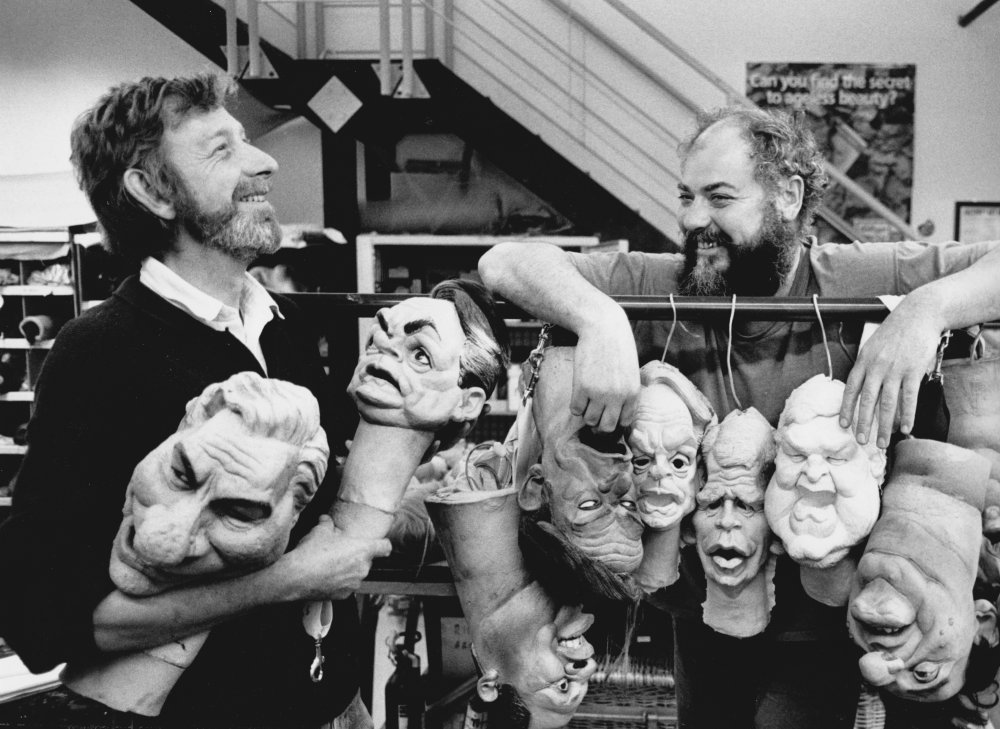 “I went for a more jugular House of Commons type Thatcher,” he explains, still switching effortlessly to that remarkable forceful timbre. “I listened to the steel that was in the voice… Most people did her in a patronising way. Very slow… I went for the honesty. ‘I’m not going to hide behind anything. I’m going to tell you what I think.’ I identified [that was] what people liked about her. My grandmother voted for her so I knew that.”

The voices were recorded first on Saturday and then the show was filmed in Birmingham with the puppets driven up each week in a lorry from the London workshop. They were built and operated by a huge, talented team, many veterans of the recently cancelled Muppet Show. The show enjoyed a serious budget – £300,000 a show, which Lloyd thinks is equivalent to £1 million today. But there was no waste. Fluck remembers the churn of characters who were no longer topical: “Their heads went back into the workshop and we cut them up with scissors. [Henry] Kissinger’s nose would be put on top of Princess Anne’s mouth and got re-mixed into the sketches.”

The intensity of the deadlines to stay topical is still unmatched. Says Law: “We’d even throw away on a Friday and reshoot on Saturday. More than once I recall editing the second half of the show when the first half was airing.” Lloyd says he got by on adrenalin and about three hours sleep a night for three years, once working 88 out of 90 days in a row: “You had a choice. Die or get cleverer.”

And what about the effect on politicians and public figures? Labour frontbencher Roy Hattersley, believes they were all fair game. “I never minded it. I think it was because of my persona. I was a sort of a bumbling old uncle. It would have been different if I’d been [Tory cabinet minister] Kenneth Baker sliming my way through it.” Lloyd feels with hindsight it was unfair to Prince Charles. Hattersley, Law, Fluck and Lloyd all agree Liberal leader David Steel’s career may have been damaged by his portrayal as a tiny figure in the pocket of his coalition partner SDP leader David Owen. The sketch only came about because of an early plan to make a number of smaller puppets. Hattersley thinks Steel was damaged “quite badly,” but won’t admit it. “But Owen believed he WAS the senior partner. The series only worked if the puppets had a grain of truth about them.” 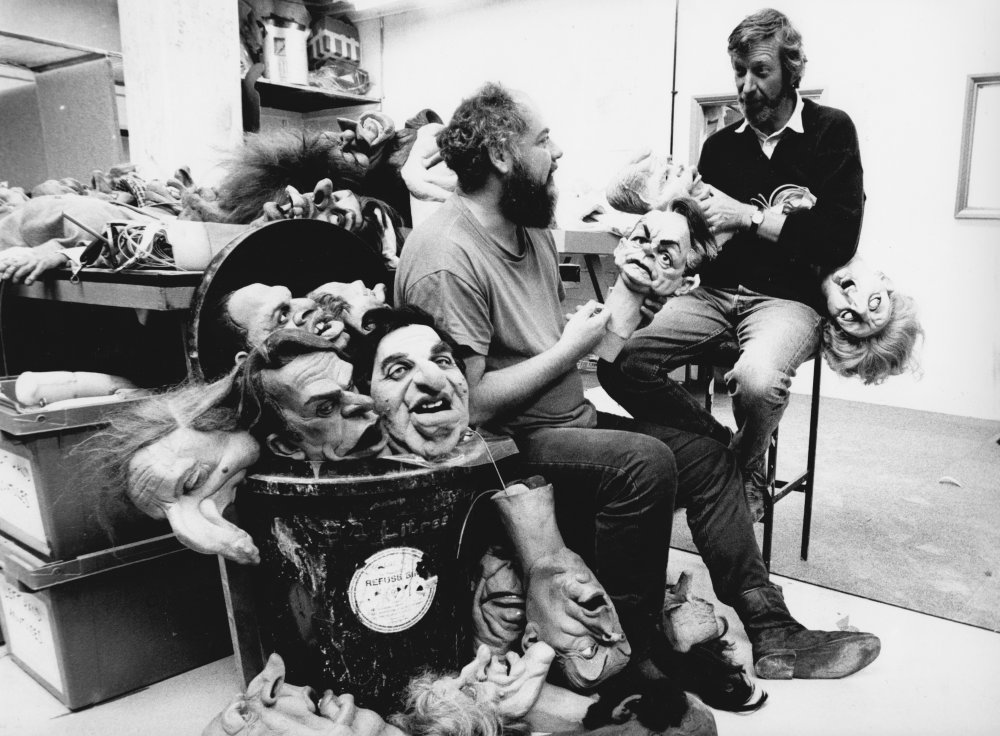 Inevitably one compares the creative freedom of those days with the pressures on political comedy today. Lloyd remembers fierce editorial discussions about where to draw the line on taste and content. “We struggled really hard to make it as balanced as possible.. And nobody ever lost their nerve. There’s no chance in hell of that in the current construction of broadcasting…Would you find anybody who’d take the political flack?”

Lloyd woke up one day on the train back into London to hear the cleaners saying of Spitting Image: “I love that show because I hate the fucking Queen.” It begs the question did Spitting Image change anything? Did it actually help the powerful figures it was lampooning? Lloyd, who remembers with horror the riots of the early 80s, is happy to think of it as a “contribution to democracy and stability” because it was “a safety valve” to let off steam. 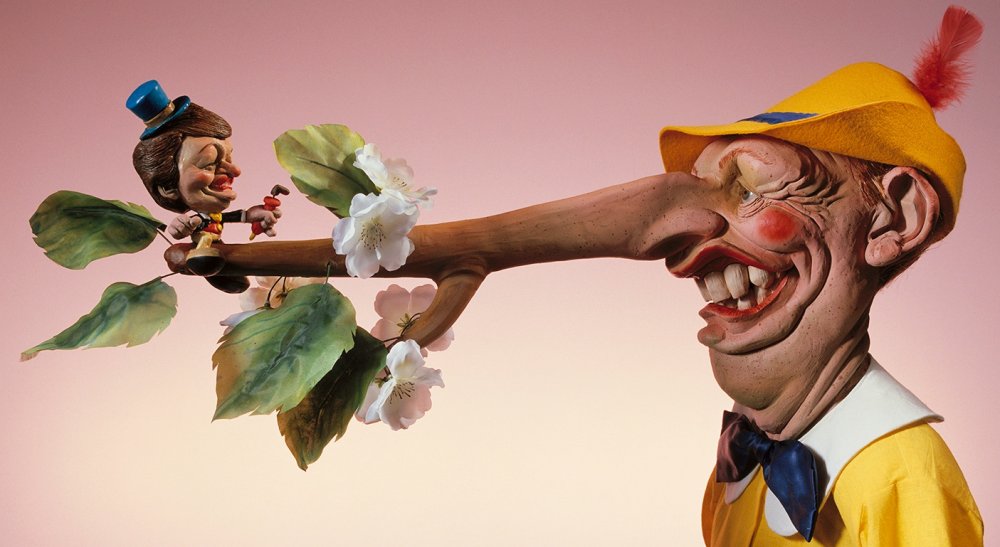 Fluck says “I did learn that it doesn’t change anything.” But he treasures the fact that it made a mass audience laugh. “I was recently approached … by someone who said: I want to thank you for getting us through the Thatcher years when things were collapsing.”

So what is the show’s legacy?  “Celebrity culture, Tony fucking Blair and subsequently Cameron,” grumbles Roger Law, the only senior founder member to stay through the show’s entire 12-year run. “The only thing I hate more than politicians is puppets.”