Memories from the mine: the day I filmed Paul Robeson

One day in 1949, the iconic actor and singer Paul Robeson made a visit to a coal mine near Edinburgh to perform for the miners. The National Coal Board sent a camera crew to record the performance, which director Peter Pickering recalls in this exclusive new interview nearly 70 years later.

2016 was a year that forced one to cling to small, unexpected pleasures. One of mine was seeing one particular archive film enjoy new life, 68 years after its original release. As part of its blockbuster Black Star project, the BFI put online a film with the unglamorous title of Mining Review 2nd Year No. 11 (1949). An early issue of the National Coal Board’s long-running newsreel-cum-magazine series, it concludes with ‘A Star Drops In’, an item covering the visit of the great African American singer, actor and activist Paul Robeson to Edinburgh and the nearby Woolmet Colliery.

Thanks especially to Twitter and Facebook activity, ‘A Star Drops In’ soon started racking up views both on YouTube, where it sits as a standalone item, and on BFI Player, where it plays in its original context as the third of three stories (the others are on mining safety and on coal economics) making up 2nd Year No. 11.

It’s a modest but cracking little film – and for me there was an extra frisson in its online success, in that it was directed by a good friend, Peter Pickering. Just 25 when he filmed the story (and, incidentally, also directed the other two items in this particular edition of Mining Review), he turns 93 this month.

I recently checked in with Peter for an email interview about ‘A Star Drops In’ and associated matters, not least since January 2017 marks 70 years since the coal industry’s nationalisation. The BFI not only preserves the film itself but also its production file, from which we’ve included a few interesting pieces of documentation interspersed below. 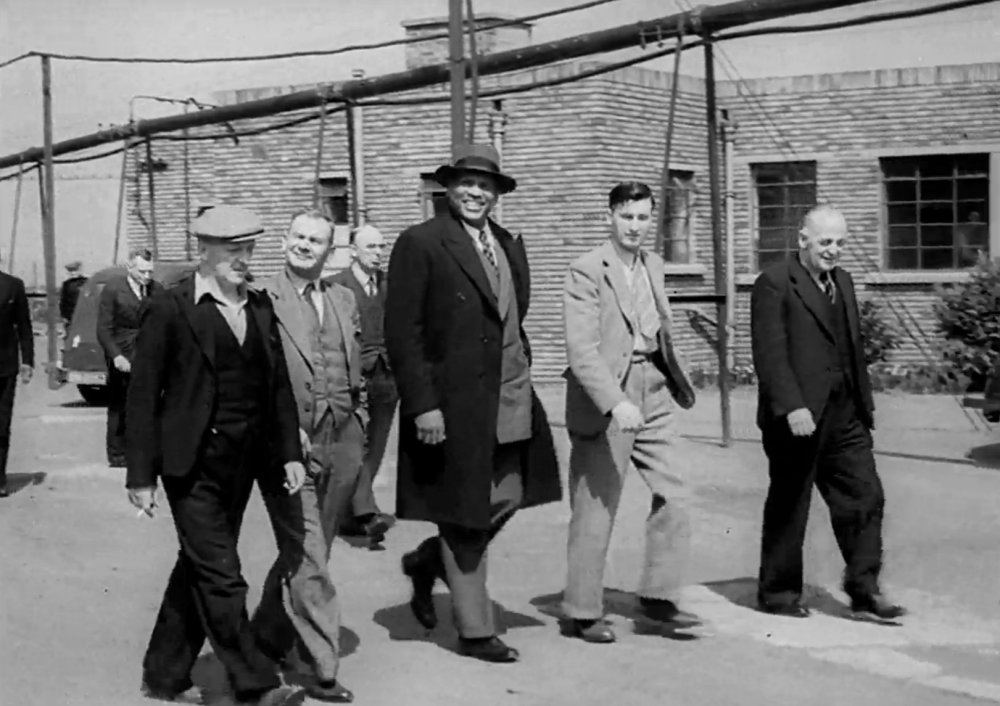 Surprised, I suppose, but happy enough. I had great admiration for Paul Robeson at the time, both as a film actor and a political figure. He delighted the miners I think.

You were a staff director at DATA Film Productions, which held the Mining Review production contract. Can you set the scene?

DATA had broken off from Paul Rotha Productions (where I’d been working before being called up) in 1944 when I was still in Italy in the army, as a one man one vote cooperative with Donald Alexander, who I think was at the centre of the idea, as producer. When I was demobbed and came back to England I was offered the choice of returning to Rotha or joining DATA. I remember visiting Rotha to tell him I had chosen DATA, and that he wasn’t very pleased.

Rotha is such a major figure in the documentary movement. What were your impressions of him?

My early feelings about him were that he was a quite authoritarian head of the company, but that was possibly my unfair 17-18 year-old [self] thinking. Even so, when I had the opportunity to choose between rejoining him or rejoining those who had left him to form DATA, they seemed to reflect that attitude. I believe in his functioning and authority as a film director and producer, and as a writer on British documentary he was admirable.

At DATA, what was the typical process of setting up and filming a Mining Review story? And what was the director’s role?

There were variations, but basically you were often sent to investigate the making of the proposed item, either on your own or with a crew so that you could shoot it straight away, newsreel fashion. Sometimes you would come back and actually write a shooting script with a suggested commentary over the shots. I think the Robeson item was the newsreel type, but I’m sure the approach must have been discussed with Leslie Shepard and Terrick Fitzhugh who were running Mining Review at the time. I don’t remember Donald Alexander being involved, but he may have been. 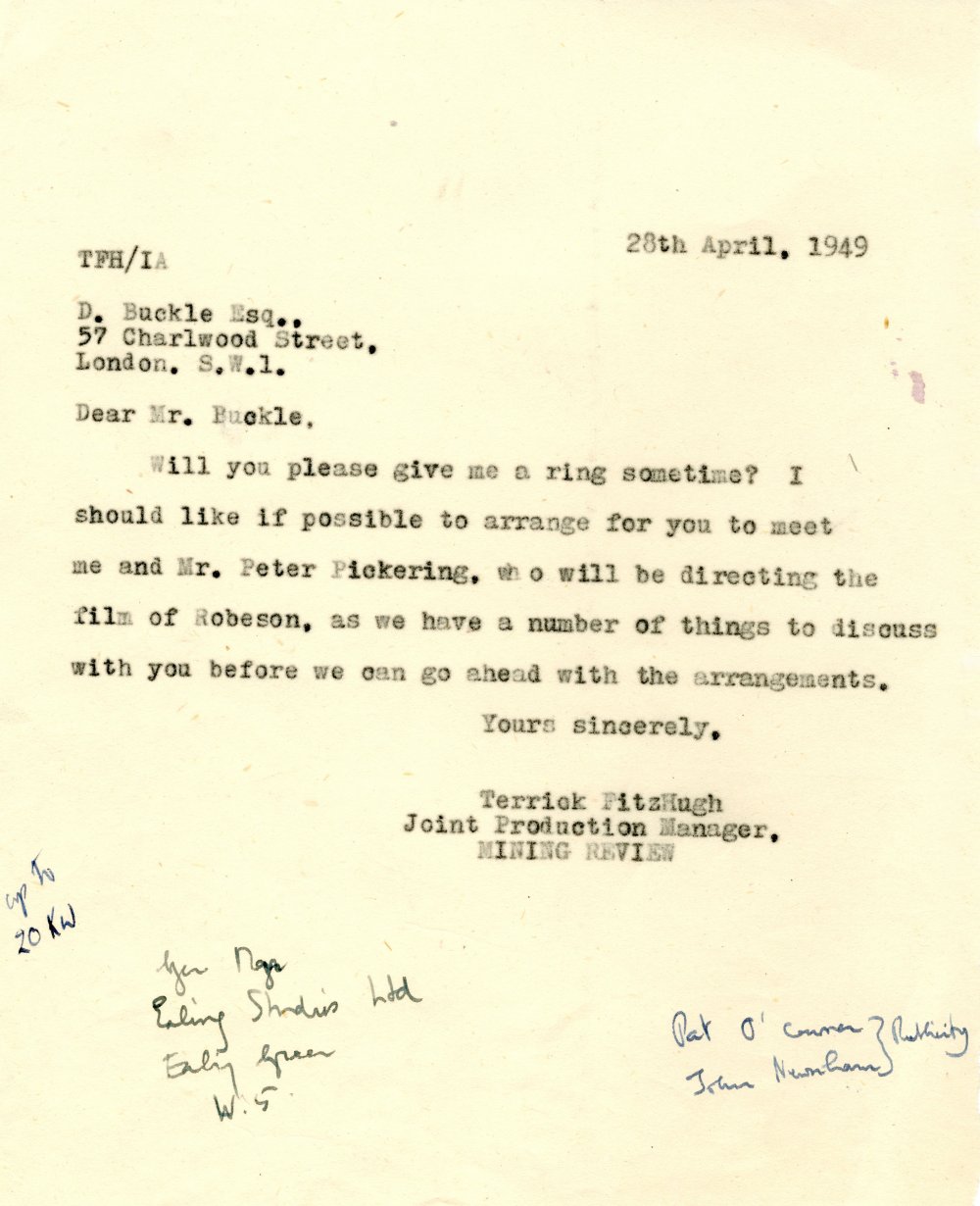 DATA’s first contact with Robeson. Desmond Buckle was a London-based West African activist who acted as a sort of unofficial secretary for Robeson during his UK visit. Note the handwritten record of Robeson’s answers to DATA’s queries
Credit: BFI National Archive 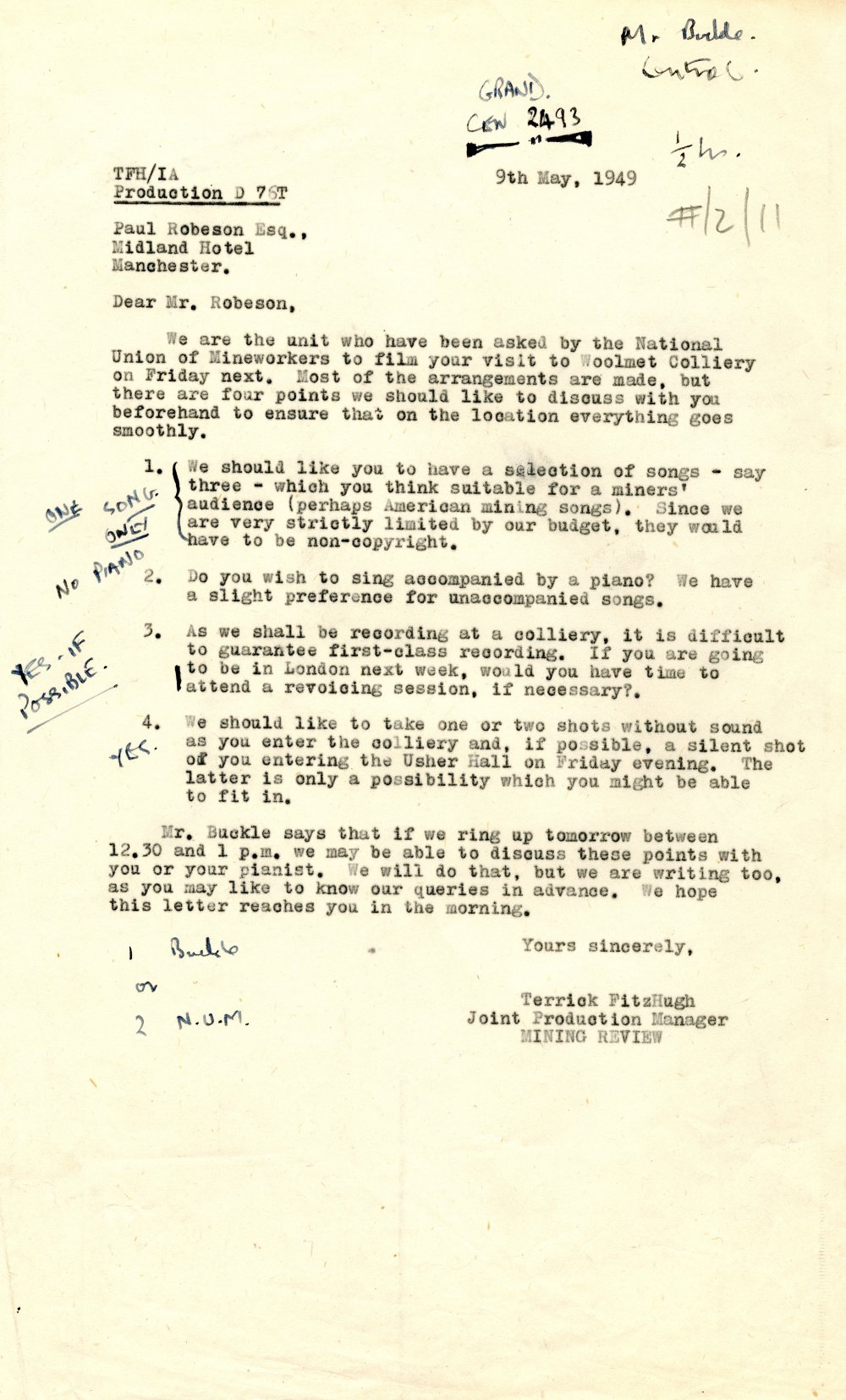 What do you remember about filming Robeson?

I don’t remember myself or anyone meeting Robeson in London, but I do think we met him in Edinburgh, maybe briefly, before filming him there and at the mine. I don’t remember personal conversations with him, and the direction was newsreel-ish and not specific. He simply wandered in among the miners, and we filmed it. I enjoyed the opportunity to film him. 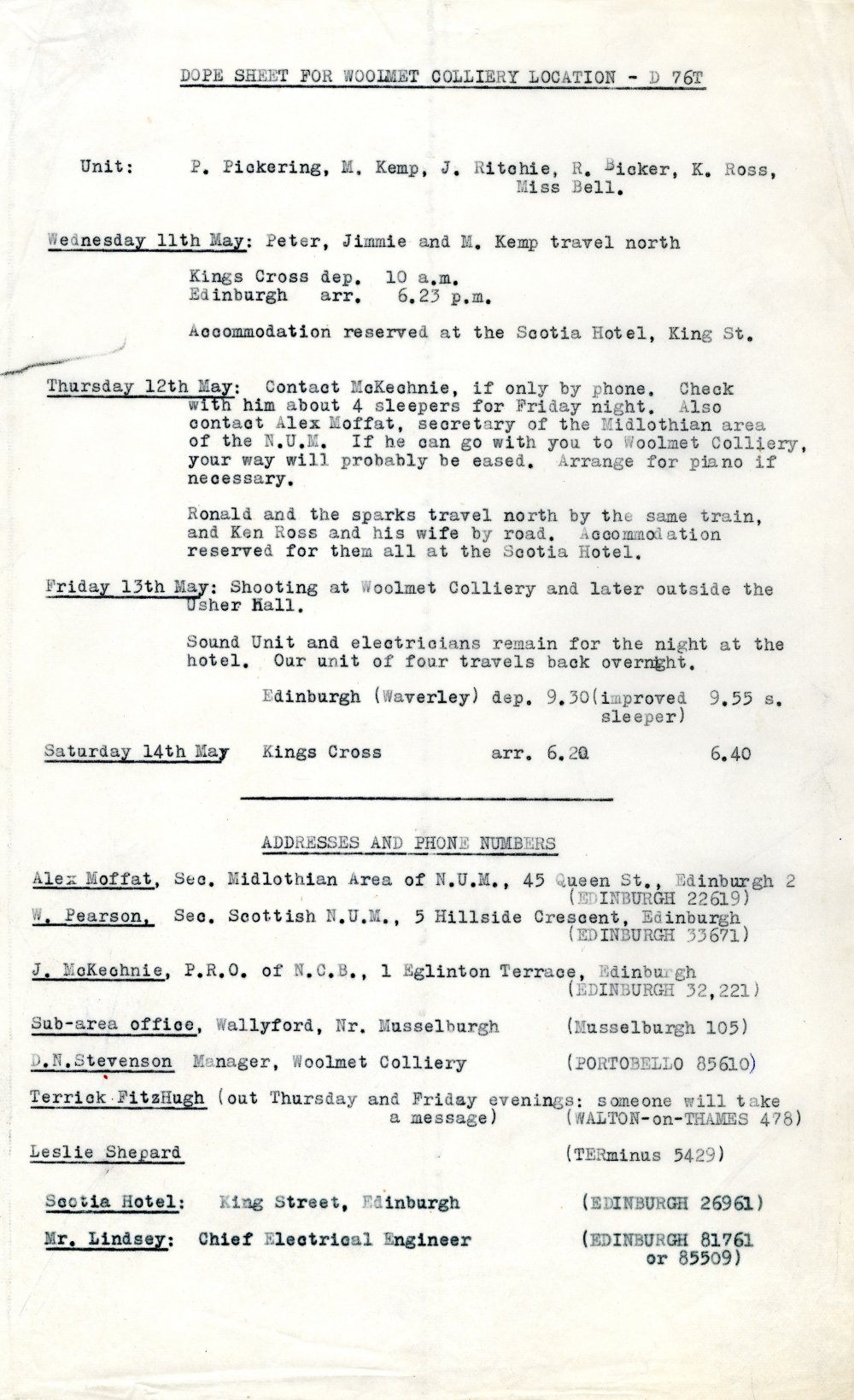 What was your experience of director-cinematographer relationships?

It varied. Perfect with Su – Wolfgang Suschitzky; alright with all the others I worked with, though some I preferred to others. The only problem I remember was the question of hand-held filming. Some lighting cameramen were less happy about that than others, even though it was usually the camera assistant who was camera operator, and who usually didn’t mind hand-held. 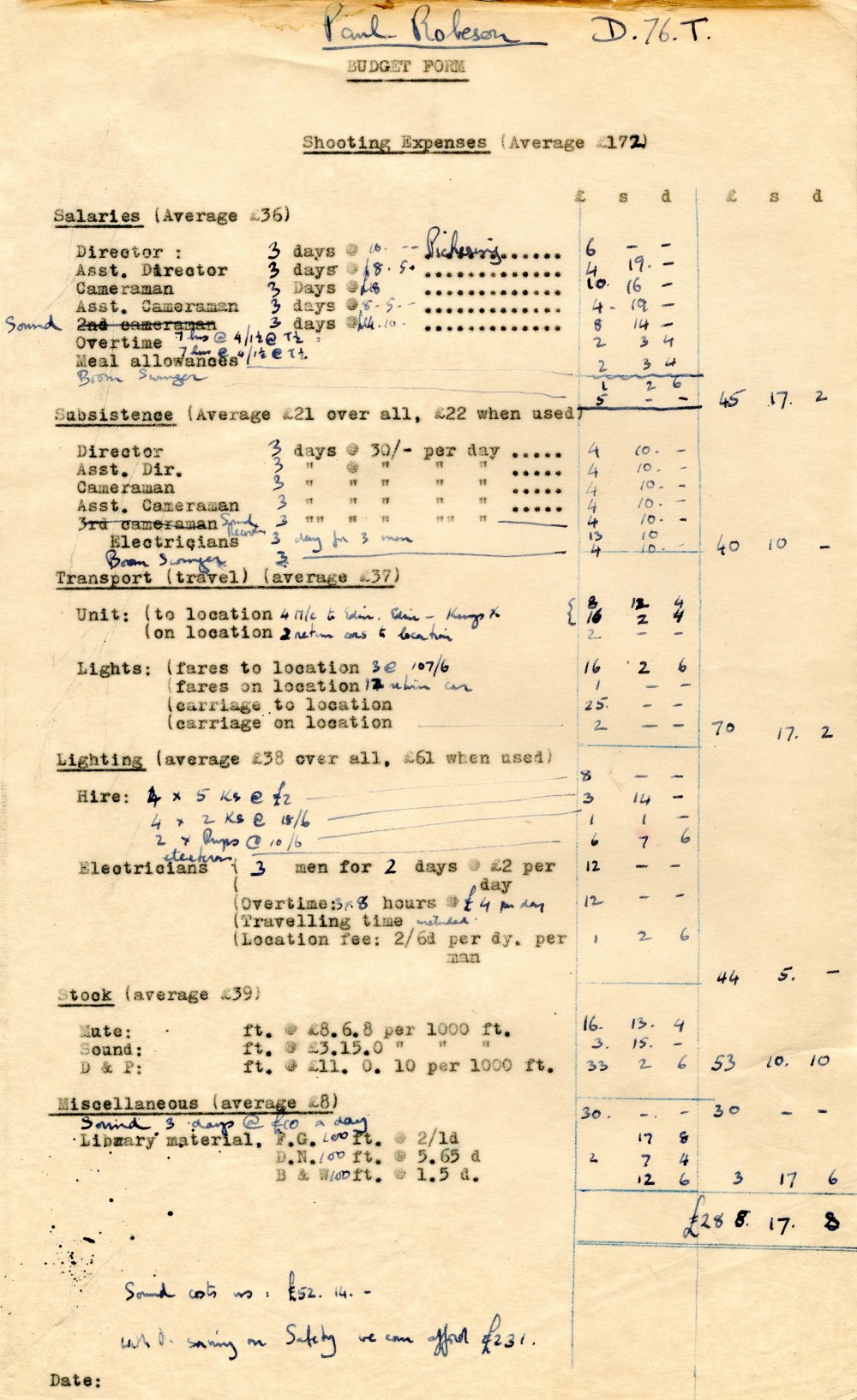 Did you know at the time that the cameraman was paid more than the director?

I don’t know. I don’t remember now that he was. I’m sure I must have known at the time, and may have considered that a lighting cameraman had more responsibility for the success of production than a director in such things as Mining Review items. 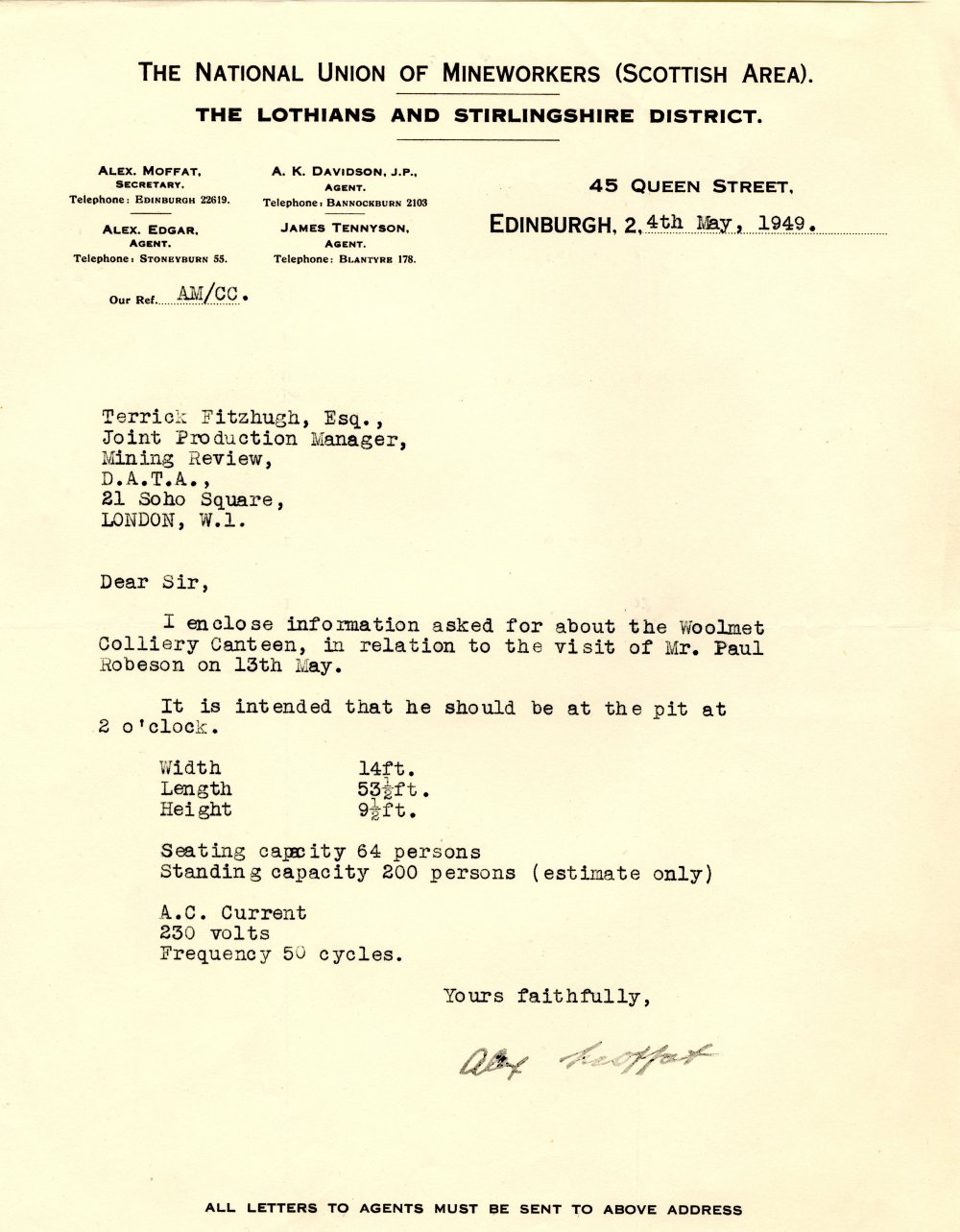 Technical planning was always an essential part of filming at coal-mines. This letter, from the miners’ union (the NUM and its local branches often suggested the subjects for Mining Review, including this one) details the logistics of Woolmet’s colliery canteen where most of the story was filmed
Credit: BFI National Archive

Can you tell us something about the technicalities of filming this story?

We rarely shot sync sound in Mining Review items, and as far as I remember in the early days, before independent magnetic tape recording, the only way you could shoot sync was by hiring sound recordists with a sound on film camera, who recorded the sound straight onto 35mm film, which you then synced with the picture.

On this occasion, because Robeson singing was essential to the film, we did have a sound recordist called in to be with us. The camera DATA themselves used then was still a Newman Sinclair, not just underground, as we still had to later, but for everything, unless studio shooting with a Mitchell or something was necessary, and that was rarely the case with Mining Review. 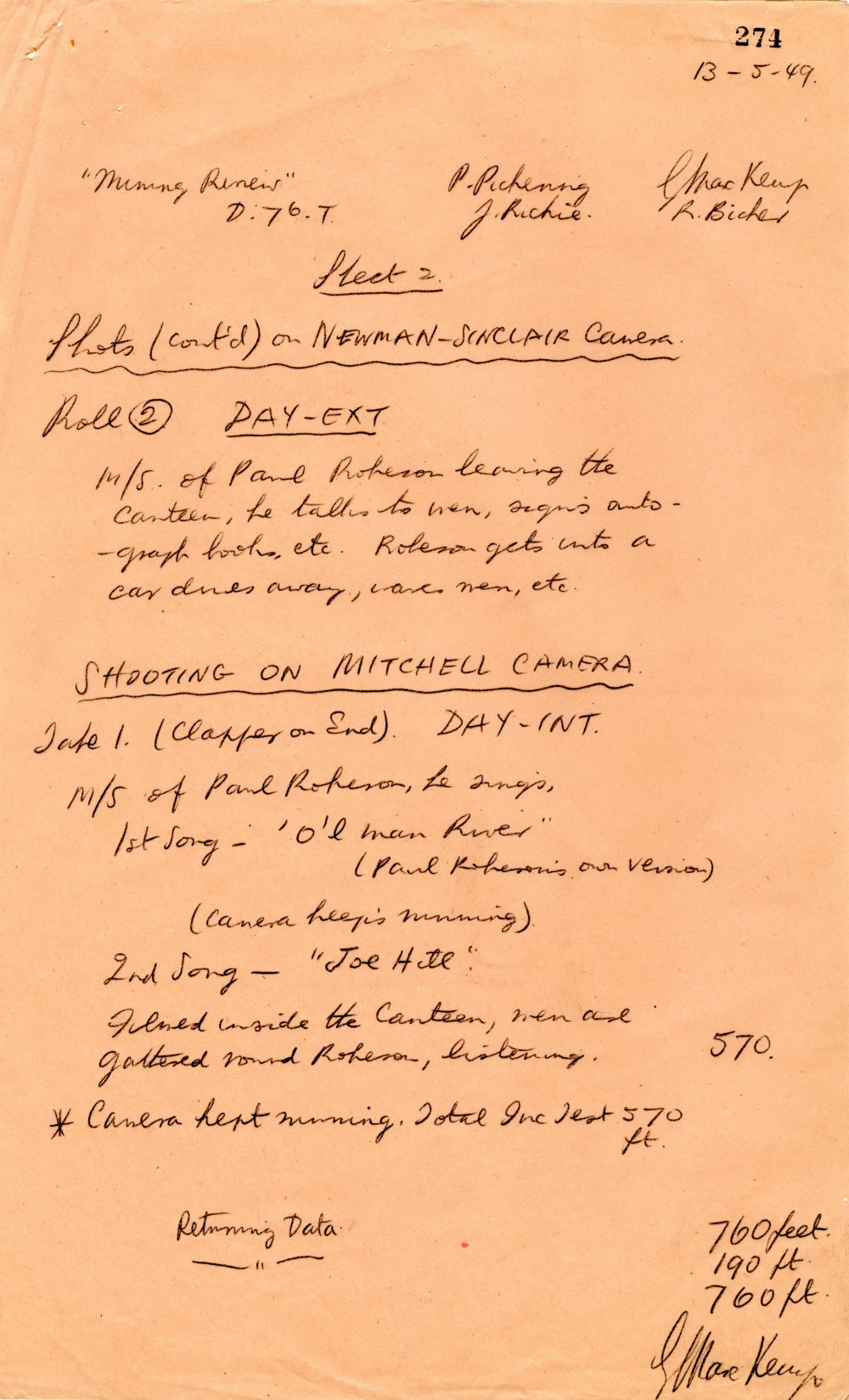 The file includes three pages of shooting reports, which record that a Mitchell camera was used for Robeson’s singing, while the Newman Sinclair, containing silent stock, was used to shoot everything else in the film. This page interestingly shows that in the event Robeson sang two songs. ‘Ol’ Man River’ (Robeson’s signature song) wasn’t used in the edit, while ‘Joe Hill’ became the centrepiece of the film
Credit: BFI National Archive

When Robeson sings ‘Joe Hill’ the effect is spellbinding, even today. Did it have that electrifying effect on you and the crew?

Yes. And for the miners too I’m sure. We, and I think they, didn’t know what he was going to sing, and I remember feeling delighted that he chose what he did.

Today, it’s intriguing that a corporate film – which in effect it is – should derive from a suggestion by the union and centre on an activist song. What was the NCB’s role in commissioning content for the series?

As far as I remember, while they chose the subjects of many items at regular monthly meetings of the NCB’s PR staff, they accepted many suggested by DATA, often as a result of suggestions from directors who saw possibilities when they were filming other Mining Review stories. 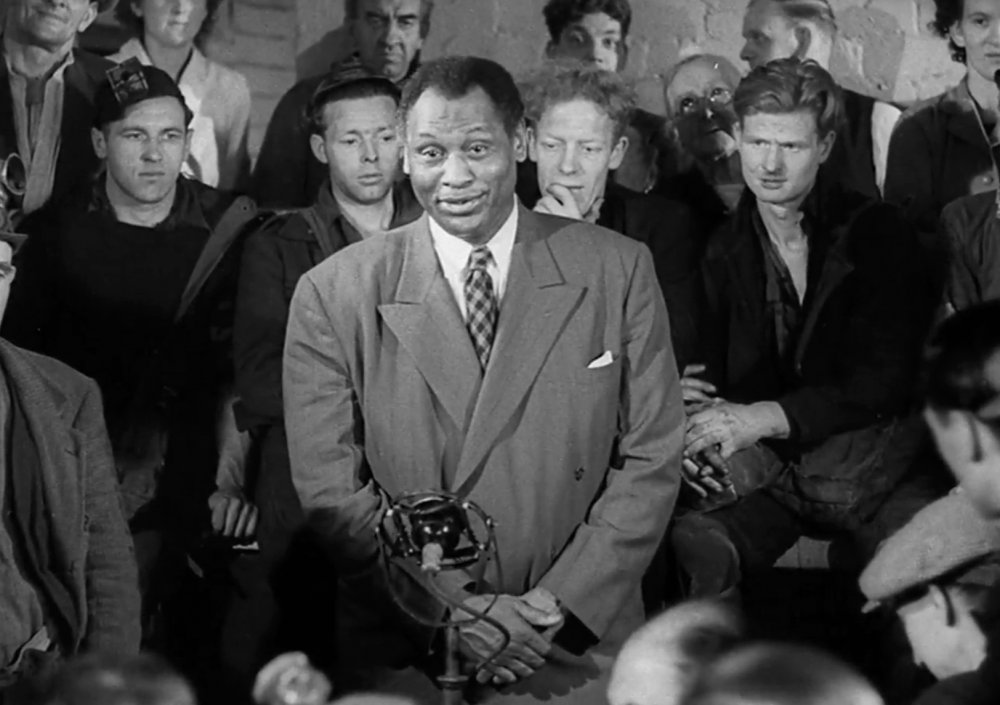 It’s also interesting that Robeson forged connections with the British working class – then an overwhelmingly white society. Did you detect any prejudice?

I think his success as a singer and actor, and his interest in active left-wing politics, overcame any sense of his racial ‘inferiority’! Both with my crew, as far as I remember, and with the miners.

The commentary uses the word ‘negro’, which grates to modern ears.

I can’t remember whether it grated with them then.

The shooting report indicates you shot 1,090 feet of 35mm rushes. The finished item is three minutes long. That’s a ratio of just over 3:1 – pretty tight! Would that be typical?

As director would you have had involvement in the editing?

Generally no. The material was handed to the editors – then Dick Storey with Robert Kruger who later became editor himself, and subsequently producer – with any written treatment or shooting script and left to them. They subsequently showed the cutting copy to the Mining Review producers, and usually the director, for approval. 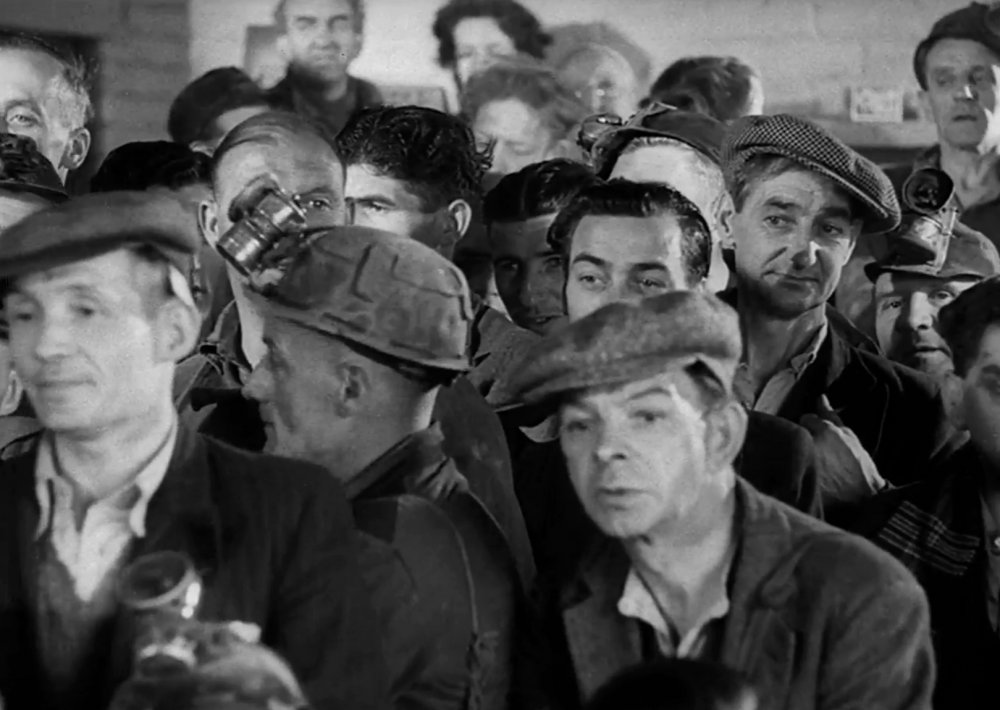 The working world has changed beyond recognition from that of Mining Review. Having lived through all that, what are your reflections on the ideological implications of the documentary film movement?

Wow! At 93 this is a question that lives with me all the time. The problem of answering it as I once might have done is perhaps made impossible by fading neurons. On the world I can only say that unless, until, the late André Gorz is recognised as having the significance of a revised Karl Marx, there’s not much hope. As for British documentary, maybe the brief hope of Attlee and Bevan and 1945 was quickly lost in regressive commercialisation, as with everything else. The classic idea of documentary became lost to an extent in the idea of non-fictional storytelling often close to advertising.

Your career as a coal filmmaker stretched from shortly after nationalisation to just before the 1984 strike. What are your reflections on the industry’s journey?

While clearly the use of coal was becoming, at the time of the industry’s destruction, anti-environmental, the destruction of mining communities, with no attempt to offer them an alternative allowing continuance, ignored the social value they had created. I can never forgive Thatcher for that!

Thanks for talking to us. Any final thoughts?

I remember that Donald Alexander shared the views of those miners who thought nationalisation should have extended to miners’ own control of the industry. I think I often felt that might be true when working with them. And thank you. I have enormous admiration for the BFI!

Thanks to Nathalie Morris and Nigel Good, of BFI Special Collections, for their help in accessing the production file for Mining Review 2nd Year No. 11.

Related to Memories from the mine: the day I filmed Paul Robeson