Andrew Kötting completes his ‘Earthworks’ triology with a story about a Russian boy raised by dogs. He tells Ben Nicholson about moving away from melodrama, collaborating with Iain Sinclair and making up a nonsense language for a film. 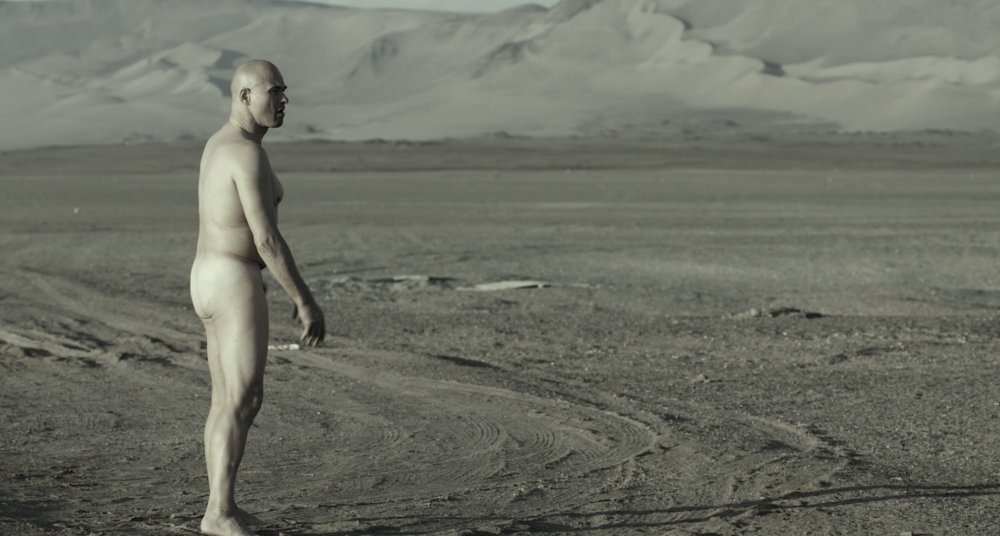 Watch Lek and the Dogs online on BFI Player

Over the past decade Andrew Kötting has been traipsing the country with Iain Sinclair exploring the various ghosts of our national psyche. His latest film Lek and the Dogs (2017), however, returns to complete the ‘Earthworks’ trilogy that he began with This Filthy Earth (2001) and continued with Ivul (2009).

Both films featured performance artist Xavier Tchili as a peripheral character named Lek, who now takes centre stage in an atmospheric and bracingly unusual meditation on human nature and psychology, loneliness and hardship, and the philosophy of time. It takes as a jumping off point Hattie Naylor’s 2010 play Ivan and the Dogs, which told the true tale of a young boy who lived in canine company on the streets of Moscow for several years. Kötting’s film follows an adult Lek through a post-apocalyptic wasteland as he recounts his time with the dogs and his struggles to adjust to a life without them.

We spoke to Andrew Kötting about adapting the play, constructing a nonsense language and the influence of his frequent collaborator, writer Iain Sinclair.

How did you first come across Ivan and the Dogs?

Hattie Naylor was an undergraduate when I was doing my postgraduate, and we kept bumping into each other in the sound studios. Unbeknownst to me, she was a big fan of Gallivant (1996) [Kötting’s documentary about a trip he took on the British coast with his grandmother and disabled daughter]. We reconnected just about when Ivan and the Dogs was being broadcast. I made a point of listening and loved it, and right there something was seeded. I went and saw it on the stage at the Soho Theatre just when I was mulling the idea of doing a third feature film about a character that lives underground [concluding the ‘Earthworks’ trilogy]. Hattie was generous and really enthusiastic, and that’s when Ivan and the Dogs very slowly turned into Lek and the Dogs. 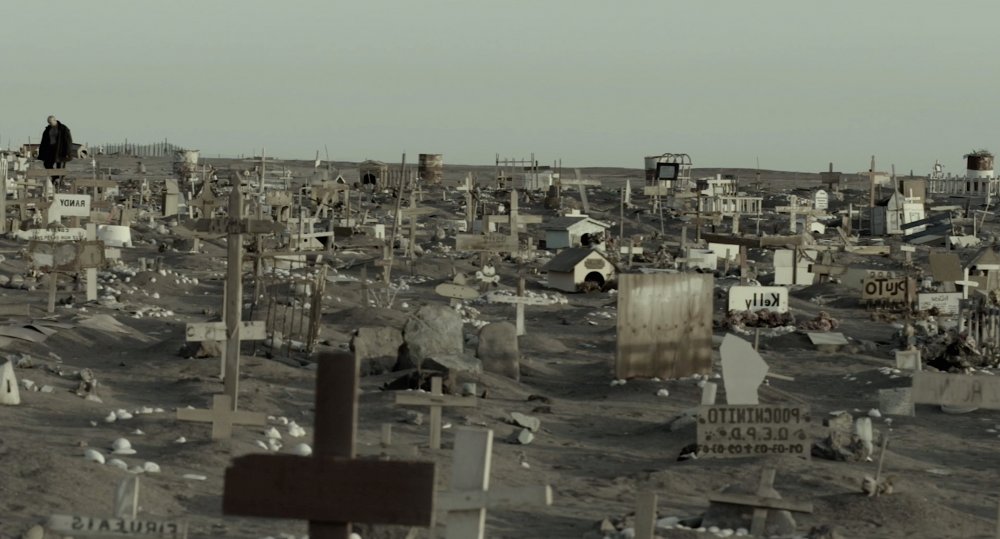 So you knew quite quickly that Ivan could fit in with where you wanted to take Lek?

It was more like a springboard. I was taking the play as a catalyst for a bigger – and maybe more ‘meta’ – story. A story less specifically connected with Russia and the time she set it, which was based on the true story of Ivan. It was an excuse to spend time together, to riff around a few ideas and just open it up. I think because I always had this idea of Samuel Beckett’s Krapp’s Last Tape – that was very much a point of reference – it just seemed right to set this monologue under the ground and have this character listen to his life.

Was Hattie involved in opening it out, or did you just run with it?

A bit of both really. It becomes a lot more essayistic and freeform as I wanted to incorporate a lot of archive. Xavier’s dad was an avid movie maker so the archive you see was him as a kid, and that really opened up the floodgates knowing – or imagining – that I had this bridge from when he goes into the orphanage and then into the world proper. It becomes the Lek story, as opposed to the Ivan story. And she was vital, Hattie, in terms of that crafting. It was very collaborative, and I was trying to be very faithful to her writing – certainly for the first 20 minutes of the film.

And presumably, the relationship with Xavier Tchili was very collaborative too? Not only because he’s played three iterations of this character, but his commitment in this film is evident.

He gets a voice! In This Filthy Earth he doesn’t really say much and he was kind of tongue-tied in Ivul. That language that you hear in Lek and the Dogs, we just created that. It was inspired very much by the work of Complicité. It’s a kind of gobbledegook language; there are bits of Russell Hoban in there, Cormac McCarthy, maybe even a bit of Nick Cave’s And the Ass Saw the Angel and we just sent it through a kind of mixer. We always wanted this Eastern European inflection. But the language was more tonal, more about atmosphere, so I was directing roughly but his outbursts were more about atmosphere and emotion. 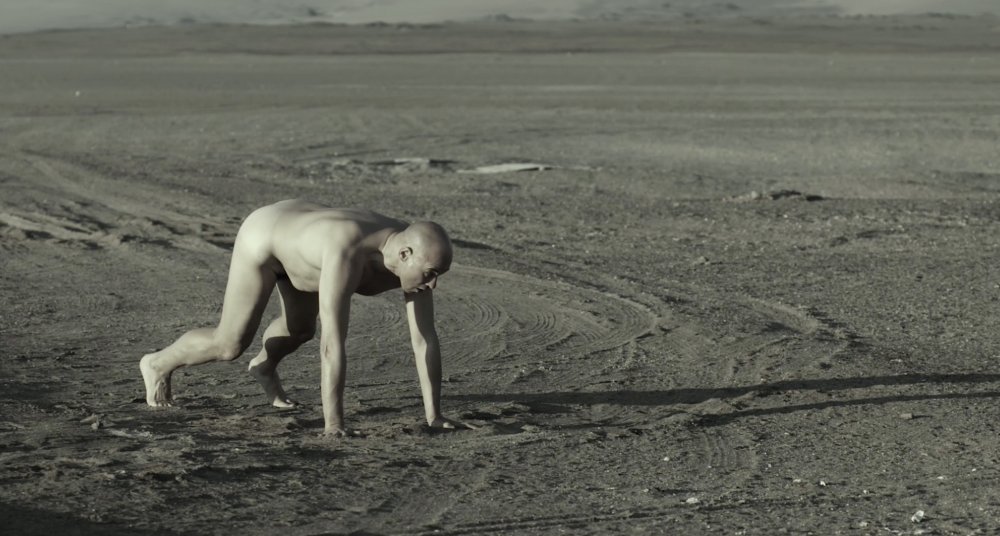 Bucking the trend of the trilogy, which was arguably moving toward cinematic convention with Ivul, this film is really dynamic, formally. It actually feels more like one of your ’journeyworks’.

I think you’ve got it absolutely right when you mention the ‘journeyworks’, and I think that’s the influence of my collaborations with Iain [Sinclair]. It sounds quite pompous, but one grows up. There’s something berserk about This Filthy Earth and Ivul, especially the melodrama, that has no pull or interest for me now – even the magical realism. I became less interested in telling conventional stories. There is a brilliant one that Hattie’s written, but the majority of my voice in it is more akin to the work I’ve been making for the last 10 years. There’s something now that I feel a lot more at home with than I would telling a story.

And this perhaps feeds into your wider work with lots of sidebar projects and offshoots. Do you come into projects looking for ways to make multiple pieces, or is it a result of you wrestling with the material?

[Laughs] Iain would say it’s just me bleeding the material for every last fucking drop! I look at it more poetically, maybe romantically. I like the idea of spillage, where things are spilling in and out. There’s something about the single screen image in a cinema which feels very didactic and limited when, for instance, if I’d made Gallivant 25 years later there certainly would have been a blog, a website, and I suspect I would never have mediated all of that material.

And finally, having seen your work regularly mentioned in the same breath as Patrick Keiller: any plans for Lek in Space, or is this it?

[Laughs] I think so. Mainly because there are lots of other things that I want to be doing. It feels good to me that Lek is to bed – it feels like closure. I might collaborate again with Xavier Tchili; we’ve got lots of things to talk about, but I think Lek just needs to shut the fuck up and go to sleep now.