Jurassic World: Fallen Kingdom and how to make a mighty dinosaur film

Colin Trevorrow, director of Jurassic World and co-writer and executive producer of its sequel, Jurassic World: Fallen Kingdom, takes us through his six steps for making a roarsome dino adventure.

Jurassic World: Fallen Kingdom screens at BFI IMAX and across the UK from 6 June 2018

Jurassic World: Fallen Kingdom is the latest multiplex-crushing behemoth in a franchise that has defined how we see and think of dinosaurs on screen since the summer of 1993. It’s the fifth film in the series, second in a planned Jurassic World trilogy and, most importantly, the best one since the Jurassic Park’s T-Rex roared into our consciousness 25 years ago. 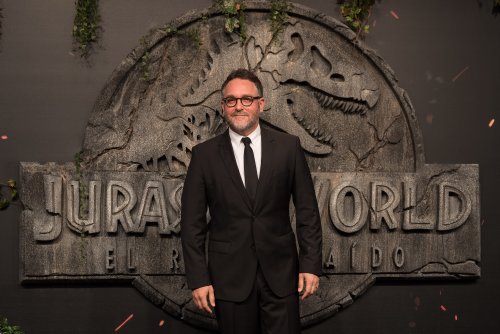 This time around former Jurassic World theme park operations manager Claire Dearing (Bryce Dallas Howard) is a dinosaur-rights activist. She gets caught up on Isla Nublar with dino trainer Owen Grady (Chris Pratt) while trying to rescue raptor Blue. The pair are double-crossed by some mean old business types led by Eli Mills (Rafe Spall) and have to deal with a volcanic eruption, a plethora of fierce dinosaurs and, of course, mankind’s inherent need to self-sabotage. Director J. A. Bayona is at the helm for some spectacular set-pieces, while appearances from fan faves like chaos theory egghead Ian Malcolm (Jeff Goldblum) keep all the clever girls – and boys – satisfied.

We met the film’s co-writer and executive producer Colin Trevorrow, who directed Jurassic World and is lined up to take the reins on the final part of the trilogy, to hear his six crucial steps to making a mighty dinosaur movie.

I try to look at the dinosaurs as animals. And I think animals can be creatures that you love AND horrifying and scary. I think that they could be our greatest companions and our biggest danger. And to be able to have that kind of dynamic allows you to not know who you can trust. And that to me makes for something much more interesting than to just have monsters you’re always scared of.

Have a relatable hero

A hero needs a level of ‘relatability’ that comes from vulnerability. I like heroes who bleed and heroes who are complex and are dealing with the same kind of doubts that many of us face, even in our sometimes mundane lives. We all imagine ourselves as heroes in certain moments. If you could link that to the adventure that you’re thrown into when you’re in a dinosaur movie, then that will be compelling for an audience.

We have many antagonists. I actually consider the villains in this movie, and actually in both of the Jurassic World films, to be mankind, and the corporate greed and the personal greed of business, and the humans who populate it.

I find something that’s special about our franchise is that we have our human heroes and our human villains. The dinosaurs, to me, are not villains. They are animals that can really fall either way. I mean, they’re predators, and so, yeah, they will eat you, but a predator isn’t always thinking about how hungry they are. They also fear for their own safety, and so a big volcano threatens everybody there. They’re going to run, just like the humans do. And I thought that we got an opportunity to throw the humans and the dinosaurs into a shared peril in this movie that we haven’t seen anywhere else. I love moments like that, when opposing sides are dwarfed by something that’s even more threatening than either of them.

“I, like a lot of filmmakers who have been given this responsibility, am a student of what the middle film is, and what its needs are in a trilogy. This film is non-stop peril, and the characters are on their heels pretty much the whole time, and that’s something that when you think of The Empire Strikes Back, when you think of the movies that really worked, those characters were up against it from start to finish.

We wanted to leave the audience in a place where it wasn’t a cliff-hanger. It felt like this was the complete movie that existed as a story in its own right, and yet people would want to know what was going to happen next. And that’s a really tough balance to strike.

Be responsible while you entertain

I try not to make a message movie, but I think that inherent in the story we’re telling are some real questions about our responsibility to other living creatures on the planet. And we’ve put a lot of them in situations of peril. The last male white rhino just died. That’s human responsibility. And we’ve had a great effect on this planet, and we do have to have a discussion about what we can do to correct those mistakes.

The first film [Jurassic World] was based on a set of ideas that he had, and I felt that movie was in service of what his vision could be. And in this film, he allowed Derek [Connolly] and I to write an original story and take it where we want it to go, and I think one of the benefits of the first film doing as well as it did is that it gave us a little bit of room to make it a little more challenging and resonant and take some risks, without cracking the foundation that Steven Spielberg and Michael Crichton built. I look at it like we are tending to a garden that was planted by others before us, and we have to plant a couple of seeds of our own. Hopefully that whole thing will grow into something more.