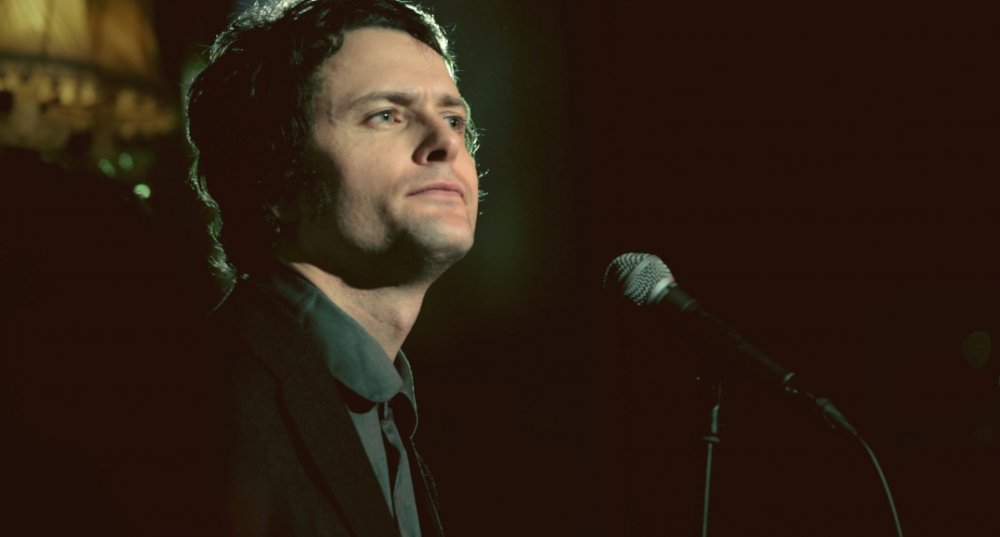 Edward Hogg in The Comedian

The Comedian is the first feature from Tom Shkolnik, focusing on Ed (Edward Hogg), a thirtysomething who works in a call centre while trying to make it as a standup on London’s comedy circuit.  After a disastrous gig, he meets Nathan (Nathan Stewart-Jarrett, better known as Curtis in Misfits), a vibrant young man, and the two begin to date. Ed’s life begins to change drastically – he walks out on his job, and even as his relationship with Nathan grows more serious, he begins to have feelings towards his flatmate, Elisa (Elisa Lasowski).

It’s a film that will chime with anyone who has followed their dreams by moving to the big city to find success, only to discover how reality gets in the way. It shows a London you very rarely see on the big screen (ie one that actually exists); Shkolnik filmed across East London, including Shoreditch, Hackney Wick and Brick Lane. With believable, flawed characters, and an excellent script developed through improvisation with the actors, it was one of the highlights of last year’s London Film Festival. Backed by the BFI Film Fund, it has been shown across the world, including at this year’s London Lesbian & Gay Film Festival.

How did the idea for The Comedian come about and how inspired was it by real life?

I had been living in London for eight years. I really wanted to make something that represented the city that I know. I felt there was a life that I could see around me, which didn’t correspond to the representation of London shown in cinemas and on television. I didn’t know why that gap exists. I thought it would be interesting to make something in that space between gritty estate dramas and Notting Hill (1999). [Those films] miss a whole gamut of experiences.

I was going through a breakup, and I met a friend who was working in a call centre. We’d meet for coffee in Soho Square and he’d tell me these stories about his life, and these stayed with me. A few months passed, and I thought of creating a character who was a struggling standup, drifting around London, and it came to be symbolic of the feelings I was having. It’s autobiographical in spirit. 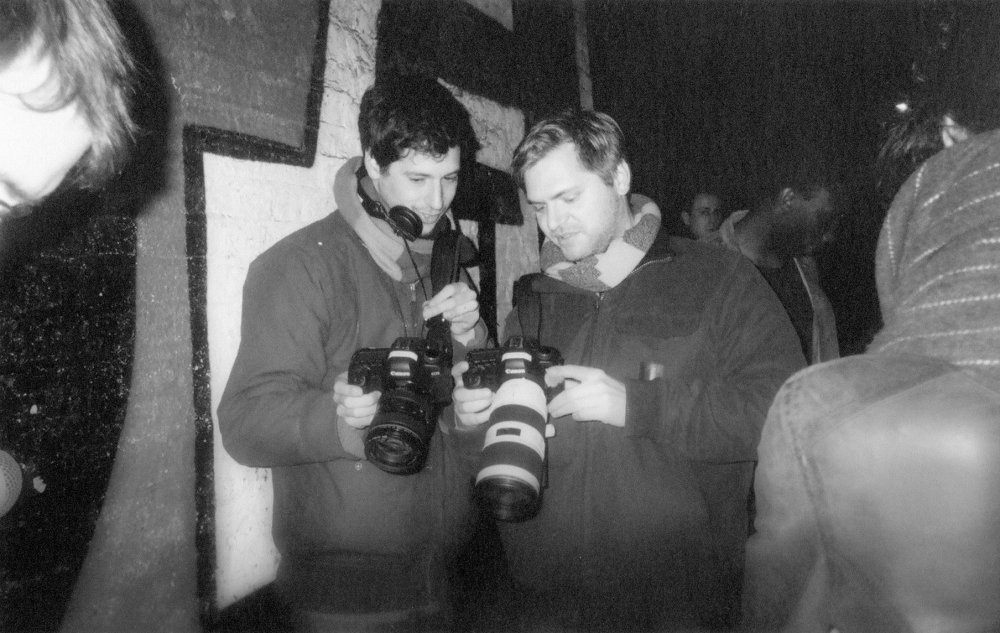 Has your friend seen the film?

Yes. He was involved all the way through, in varying degrees, and he’s seen it several times. When I started working on it we didn’t know where it was going to go. We spent a lot of time talking about things that happened to him as a young gay man living in London. A lot of his experiences didn’t make it into the final film, but there’s still something in the texture of his stories that’s still there. The character ended up being very different from him, but he is pleased with the result.

The film was born out of improvisation. How did you work with your actors to create the script?

It needed to feel like my life, or the life of people around me. I was obsessed by this idea. At the time, I wanted [the film] to flow like jazz music, riffing on the beats of the story. We had a list of rules, which would lead us to some kind of texture. All the actors were called by their own names and wrote their material – It’s Ed’s standup, they’re Elisa’s songs. We couldn’t fake locations. We weren’t allowed to stop businesses from working when we were filming. We couldn’t use day for night.

We only did one take for each scene. We would only shoot [trial improvisation workshop] scenes if we didn’t know what the conclusion would be. We would set up the premise of the scene, and shoot the exploration of a number of possibilities. I’d go back and watch the rushes to see what would work best and work out how we could continue from that point onwards.

There’s a particularly powerful scene where Ed and Nathan are hassled on a bus by a group of teenage girls.

That scene was really important. It was always in my mind. When you live in a pseudo-liberal environment, I think it’s quite easy to become blasé about sexuality. But actually the world around us is not as open as we would like to think. There needed to be an external factor which would come crashing in on this illusion of freedom.

I didn’t want any clichés in the film – [if the scene had featured] a standard gang of boys, that would be really boring. I figured that if it was a group of teenage girls it would be more interesting.

I’d met Edyta [Budnik], the blonde girl, as part of the audition process. I called and asked her to create a gang with her friends. In rehearsals I’d encourage them to abuse me verbally and I’d fight back. We came to do the scene on the bus and they really went for it. I knew we were exploring with Nathan ideas of being gay and black, and attitudes towards sexuality within black society and him being outside of that. I knew that would give us something intriguing. 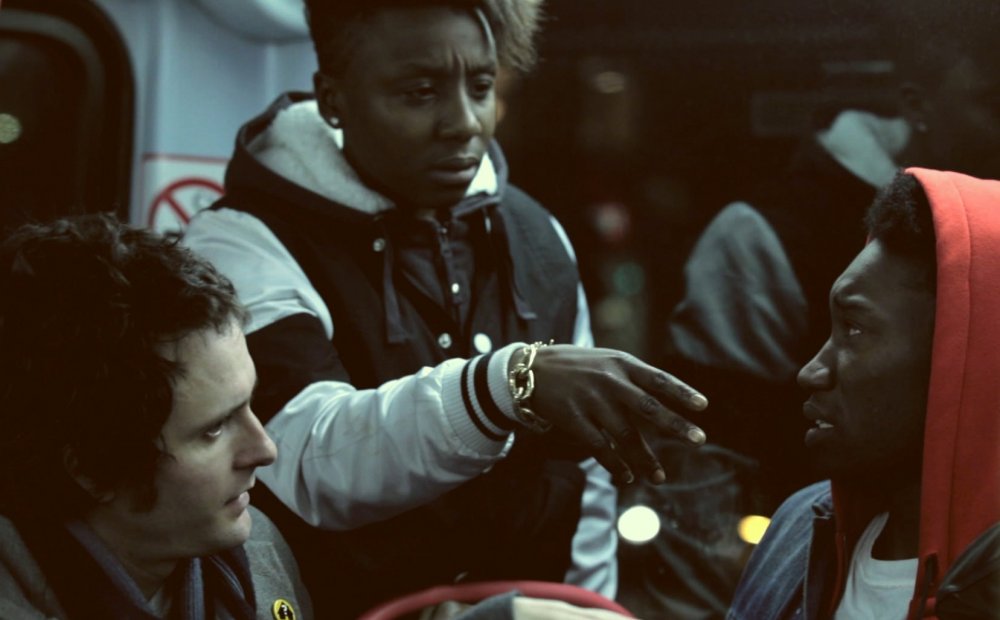 One scene that’s hard to watch is Ed’s disastrous standup routine and the compère’s reaction.

Ed genuinely was utterly terrified on stage, because it was his material he’d written and spent months preparing, no one gave it to him. He was very attached to it, and when it went badly, it was hard for him, and that became part of the film.

I think the film became a study of self-destructiveness and failure, and what’s it like to fail. One of the first questions I asked the cast was, “Where would you be working if you weren’t an actor?” People responded with jobs like “call centre operator”. You come to London when you’re 21, and you think you’re the shit and the city will bow down to you, and 10 years pass, and it doesn’t and the city doesn’t care.

It’s screening at the London Lesbian & Gay Film Festival. Was it always the intention to have a gay, or possibly bi, protagonist?

We were screening the film in Tel Aviv at the British Film Festival. Afterwards a film professor from Tel Aviv University said “you know, this is one of the few films where sexual orientation isn’t described.” We talked about that a lot – reaching that point where it needs to be defined. Is Ed gay? Is he straight? I don’t know. He has these feelings for a man, he has these feelings for a woman.

It was important to capture the complexity and fluidity of feeling without labelling this person as gay or straight. I know gay men who have had relationships with women. I know in my own emotional world I can fall in love with men. No one says the word ‘gay’ before [the scene on the bus]. And Ed remains speechless, he can’t react because he’s never defined himself that way. It was all about trying to capture the fluidity of identity in modern life. The desire to define and the desire to remain undefinable. 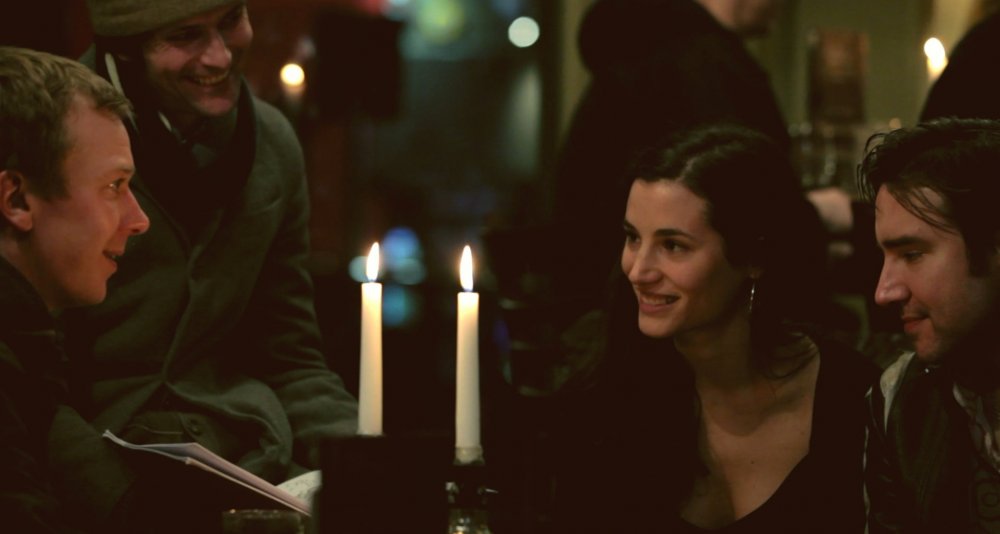 At 80 minutes, it’s a short feature. Did you feel it would be this length when doing improvisation?

I had no idea. The first cut was nearly six hours long. I think we made a decision to condense it as much as possible. It could have been more leisurely and observational. During filming, we used the word “humble” a lot. I wanted to make a humble film, that wasn’t showy or a calling card for anything. When we were editing, we were stripping anything that felt indulgent.

I don’t know yet. Luckily, some people like The Comedian, so they’re willing to listen to my ideas. I want my next film to be very different from the world of The Comedian. Something else.