The films that anticipated the Brexit vote

Visiting communities across the UK, the Guardian’s online video series Anywhere but Westminster took the temperature of a nation in the run-up to the EU referendum. With the films now added to the BFI National Archive, curator Ros Cranston caught up with video journalist John Domokos. 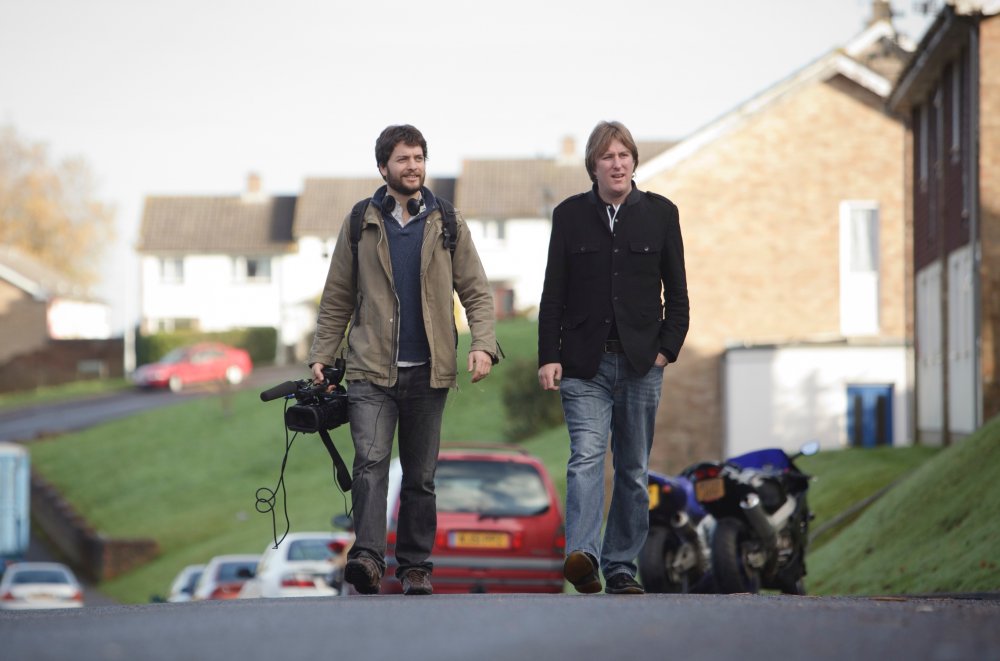 Newly arrived in the collection of BFI National Archive are nine of the Guardian’s entertaining, perceptive and groundbreaking online video series Anywhere but Westminster.

These short films made by journalist and author John Harris and video journalist John Domokos capture the political mood of everyday folk in a compelling and witty fashion, consciously breaking with “the conventions of television news and Westminster-centric newspaper political reporting”.

They visit communities across the country from Jaywick in Essex to Greenock, Firth of Clyde – and along the way the filmmakers observed the possibility of the Brexit vote well before other mainstream media.

As part of the process of bringing the films into the archive, non-fiction curator Ros Cranston took the opportunity to ask Domokos about the series.

How did the Anywhere but Westminster series originate?

In 2009 I was sent with John Harris, who was writing about politics for the Guardian, to cover the political party conference season in video. The Guardian had only recently begun making its own videos to publish on its website.

Party conferences are very strange events, where the entire show lands in the middle of a town like a spaceship, and all the action takes plan inside the security ring of steel. And the way they were covered by most of the media was very straight – who’s up, who’s down, how today’s big speech went, set-piece interviews. For us this felt boring, and we began to show the behind-the-scenes stuff, the airless press room, stuffy fringe events in the bowels of the maze-like conference centres, and the faint absurdity of the whole events.

The videos were popular and felt different from what anyone else was doing, so they kept sending us. We began to go outside of the ‘bubble’ of the conference and speak to the public, highlighting the gap between the mood inside and outside. After a couple of years of this we began hitting the road at other times of the year, developing the idea of exploring the gap between politics as shown on the news, and politics as seen by man and woman in the street, in places that rarely saw journalists visit.

In 2014 we gave the series its title – it was around the same time as UKIP was on the rise with its anti-establishment message. They seemed to be the party tapping in to the same feeling of disconnect that we were finding. Fortunately, we appear to have outlived them for now, mainly by staying curious and open, and trying to learn from our mistakes. 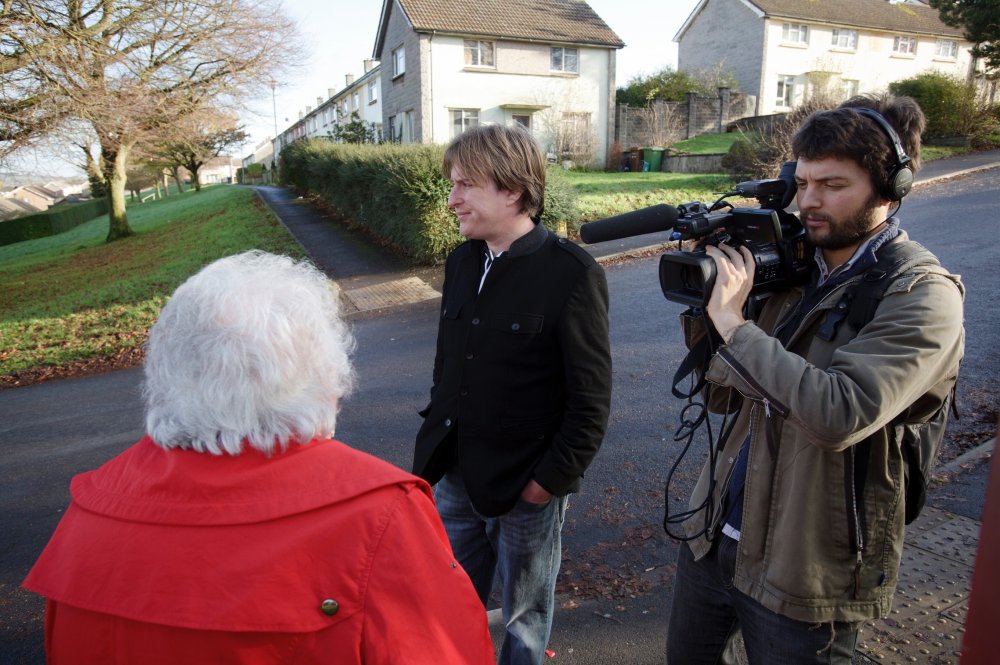 How has the working dynamic evolved between you and John Harris?

At the beginning John Harris was the commentator, and I was sent to be the cameraman. But we soon found that our approach to what we each did matched very well: he had a sidewise look at politics, coming at it as a skeptical outsider; I felt the same about video journalism, wanting to avoid the standard formulaic approach of much of the broadcast media to it.

Another aspect of our naturalistic approach is for John Harris to act less like a traditional presenter, and more like a character, reacting with real feelings to a situation rather than the scripted wisdom many presenters convey.

We’ve had difficult moments on the road, and the kind of fall outs that probably happen with bands when they go on tour. But ultimately we have a lot of fun, and have always seen the humour as a key element to put into the films, and keep the show on the road.

Do you have a favourite of the films?

It would have to be the EU road trip. We try to make all of our films feel like a journey of discovery rather than pre-scripted, but it’s hard in practice to stick to that, and scary to set out to make a film without anything set up. But in this case, the only thing we decided on before we started filming was where we would start – the south Welsh valleys.

From there we travelled across the country, making it up as we went, with one aim: to speak to as many people as possible, in as broad a range of places as possible, to somehow gauge the national mood ahead of the referendum.

The film builds towards a single epiphany on a housing estate on the edge of Manchester that feels true to this day. By some strange form of osmosis – and luck, probably – the resulting film felt like it captured the dark mood of time, and foreshadowed not just the result but much of the debate and attempts at explanation that would follow.

It’s a great example of the power of the much-maligned (and much-abused) vox pop – on TV usually a short, tightly cut sequence carefully balanced out for political views on both sides; here it was the entire film.

Did any of the films take unexpected turns during filming?

Almost all of them ended up differently from what we set out to make. But the biggest surprise was when the exit poll came in on 7 May 2017, and Jeremy Corbyn had defied expectations and taken seats from the Conservatives. We were in a hotel in Walsall, with plenty of footage from people slagging him off, but not much evidence of the Corbyn surge in our material. And we had a film to turn around for the next morning.

Whether it was through the ‘availability bias’ of the type of person who agrees to do vox pops, or bad location selection, or just bad luck, the people we had filmed that day were mainly older, and in non-university areas.

We knew the only thing to do was hit the road again – so we set off for Birmingham in the car that night, and found lots of young people enjoying their night out, not political activists, more like students. Yet they had all voted for Corbyn. It felt like some kind of reverse of the Brexit result, where older voters ‘won’. So we edited through the night and made a film of two halves, calling it ‘The Britain That Lost and the Britain That Won’.

With the films now held in the BFI National Archive, how do you think future audiences might react to them?

All of them are made in a few days, shot and edited without time to polish or reflect on them. This gave them an immediacy at the time, helped them work as videos for a newspaper website, where audiences want to know what’s happening right now.

Hopefully put together like this, and placed in a more historical context, they form a kind of chronicle of this fascinating period of political upheaval in Britain, and oral history. So when future generations are wondering say, why it was again that we ended up leaving the European Union, they can watch the people that voted for it explain why.

Are you planning any more films in the series?

At the moment, it feels like we are never far from a possible election or another political crisis. So much as we need a break from each other, and life on the road, the next series is probably not too far away. At times it can feel like being the classic ageing career criminal in a heist movie who wants to go straight but keeps coming back for ‘one last job’. 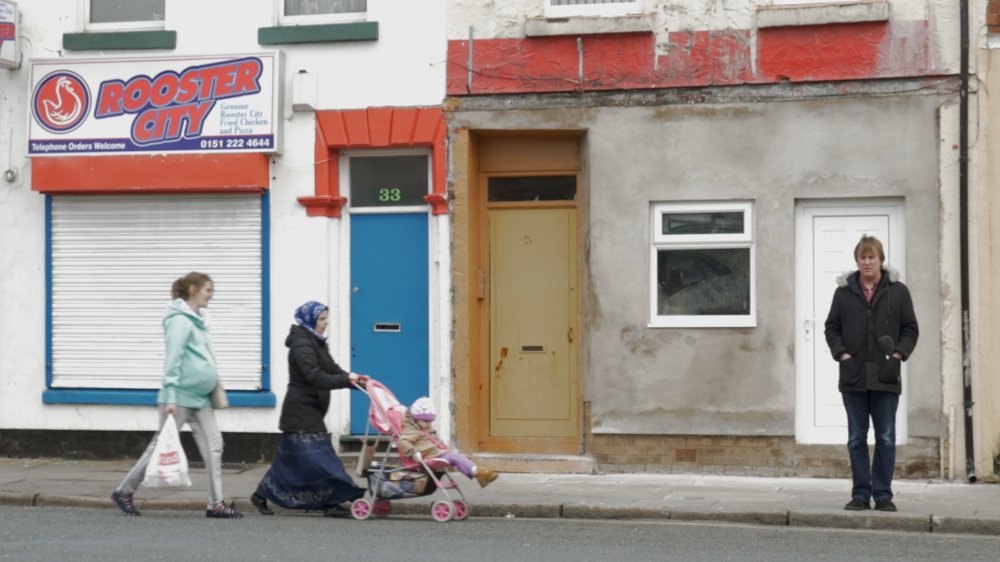 How do you see your work in the context of broader British film history?

We have often bandied around terms while we are filming such as ‘vérité’ or ‘gonzo’, usually ironically, as we are aware of our lowly place in the cinematic food-chain (as well as how meaningless and clichéd those terms have become). But I suppose there is a parallel between what British filmmakers did with the Free Cinema movement, and how we approached the business of making video news. They were reacting against the conventions of traditional documentaries at the time, and seeking a more authentic, personal and down-to-earth approach. In our case it was the conventions of TV news and Westminster-centric newspaper political reporting against which we defined ourselves.

In a vérité-like spirit, we don’t try to hide the presence of the camera, or the production process, or even our own biases. They are part of the story.

Those movements were made possible because new technology (ie 16mm film cameras) made it easier to be mobile and capture real life. We happened to come along at a time when video cameras became small, cheap and much easier to use without training. At the same time the internet as a place for distributing those films created a very open space for experimentation where the conventions, rules, methods and audience expectations of TV and film did not apply.

We also follow in some ways in the footsteps of Nick Broomfield, in terms of John Harris’s strong on-screen presence that is there to draw out the meaning and humour in a situation, and to almost provoke the other characters into saying something revealing.

Other ingredients that have gone into our mix have been the road movie genre (John introduced me to Christopher Petit’s Radio On), modern political satire (such as Armando Iannucci’s In the Loop), and above all a mutual appreciation of the possibilities in the humble TV vox pop.

If you could deposit your work alongside any other director in the BFI National Archive who would it be?

I’ll say Patrick Keiller. His Robinson films have been a recurring reference for us on the road, although very different to what we do. His evocation of the country, through the use of no-frills shots of A roads, roundabouts and shopping arcades, coupled with the dry humour is something we’ve always aimed for in our own way.

What are your next projects?

I’ve just produced an eight-part episodic series set in Stoke-on-Trent, looking at how that city is trying to re-invent itself and change the perception of it in some circles as a kind of Brexit backwater. In that sense it is a relative of Anywhere but Westminster. But in another it’s very different – an in-depth look at a single place over the course of a year, rather than the more fleeting capturing of a moment that is an ABW film.

It’s an attempt to find a place for longer-form episodic stories on a news website. It comes out early in 2018 – if it works, I’d like to do more along those lines. I’m also keen to take the thinking behind that and Anywhere but Westminster further, and start projects that bring more diverse voices not just into the videos, but into the production of them.