Why I love ... Morons from Outer Space

This sci-fi satire with a silly title from the director of Get Carter and Flash Gordon is much more fun than its death at the box office suggests. 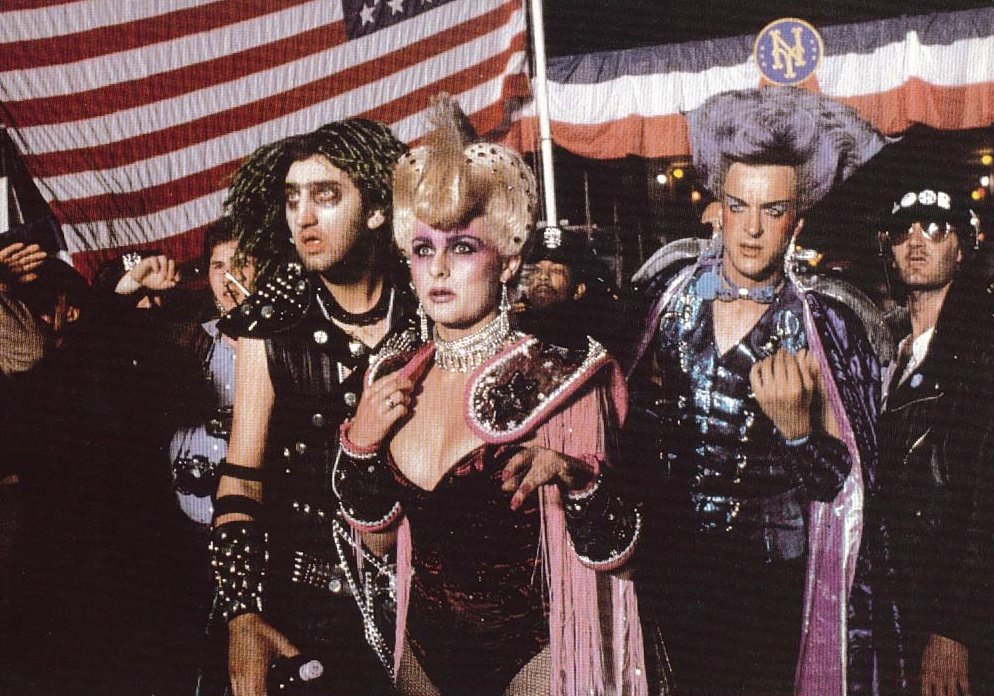 I first saw Morons from Outer Space at the ABC cinema in Oxford on its release in 1986. I went with my family and I remember two things. That the cinema was basically empty and that I laughed harder than I had ever laughed in the cinema. I was 10.

It has never stopped making me laugh. I watch it at least once a year. And I still laugh. I unapologetically love this film.

A box-office failure from 1986 starring Mel Smith, Griff Rhys Jones and, well, Jimmy Nail, it tells the story of four hapless humanoid aliens who accidentally crash land their spaceship (kind of an intergalactic caravan) on Earth, specifically on the M1, just outside Hatfield. It’s a spoof – not the most highly regarded genre out there – and most excruciating of all, it’s called Morons from Outer Space. Probably the worst title ever bestowed upon a film, let alone one which already had so much working against it on paper.

Nobody saw it. Nobody wants to see it. I don’t blame them.

So why do I love it? Well, first and foremost, it’s a genuinely funny film. And the things that made me laugh when I was 10 are not the same as the ones which make me laugh now (apart from the moment where, watching the riot outside their flat live on TV, one of the aliens says “that man’s about to throw something” at which point a brick flies through the window and brains Griff Rhys Jones). Like the best comedy – and, yes, I might be about to compare Morons to Chaplin, it combines the most base physical humour with sophisticated social commentary. 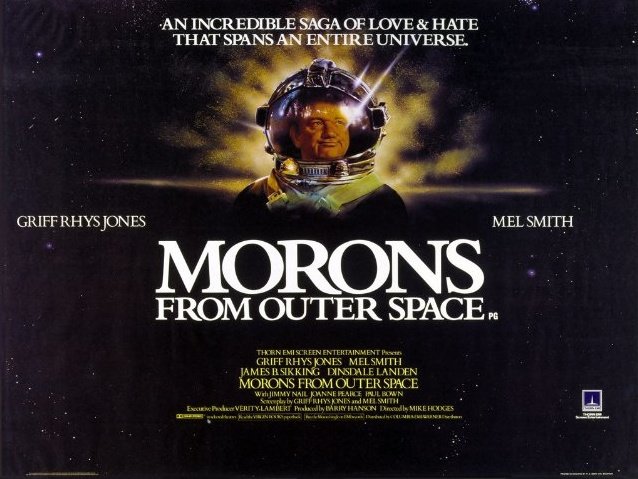 It mocks British social mores, aggressive American foreign policy, and every level of the establishment and media. Then it turns its eye on your average human Brit and shows us how preposterous we are when scaled to the universe as a whole. Beer-swilling, fashion-obsessed, lazy, rude, petulant, with a massive sense of self-entitlement and very little self-awareness.

Specifically, Morons from Outer Space was an attempt to burst the bubble of late 70s/early 80s sci-fi as ushered in by Steven Spielberg. It took the grandiose visual style, the dolly-in close-ups of men in suits looking enchanted, the spaceships through the fog, the notion that aliens are of a higher intelligence and coming to share love and wonder – and posits a more likely outcome: that if there is life on other planets, it’s likely every bit as flawed and idiotic as we are. If sci-fi’s role is to hold a mirror up to society, Morons from Outer Space does this in the most literal sense.

I’m going to go a bit further and say that, like all the best sci-fi, Morons from Outer Space was actually quite prescient. We live now in an age where technology and communication networks are far more advanced and powerful than almost anyone who actually uses them. You only have to read the comments section under any YouTube video or look behind the wheel of any Audi to confirm this. So, what would happen if a company suddenly produced an affordable, easy to operate space vehicle? We would infect the universe with our idiocy. I’d say this is a notion that has rarely, if ever been explored in sci-fi. 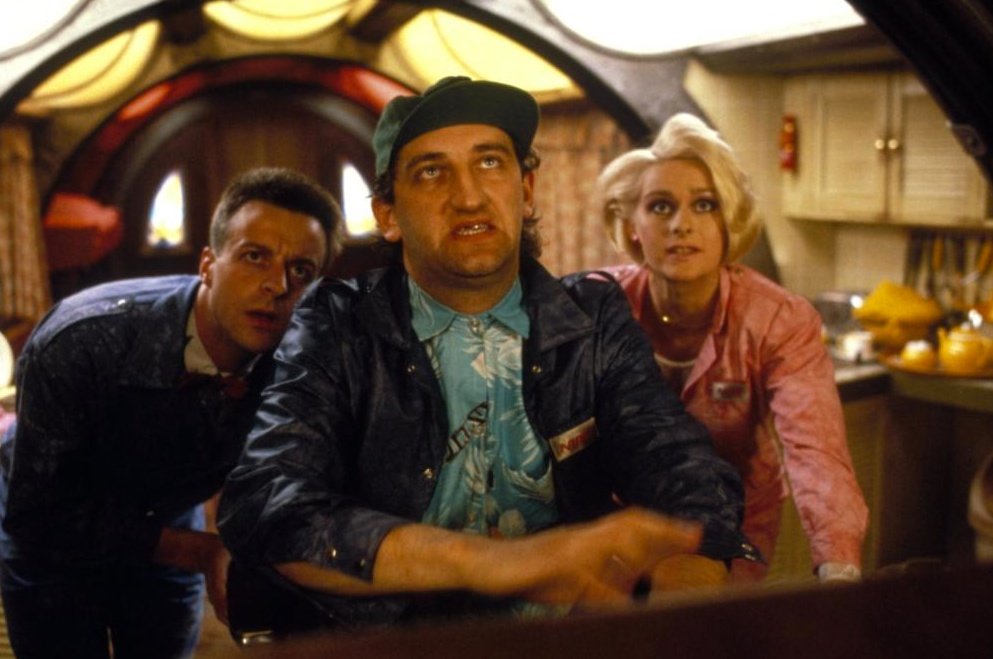 Further than this, Morons from Outer Space preempted our current rut of dullards-turned-celebrities and celebrities-turned-news stories. Our trio of aliens (Smith lands separately and has his own sub-story through most of the film), liberated from their secret government prison facility, enlist Griff Rhys Jones’s feckless Graham as their reluctant manager and they quickly find themselves on the talk show circuit and performing sold-out stadium gigs despite a total lack of musical ability or general competence.

This shouldn’t come as a surprise. Smith and Jones were no slouches when it came to satire, having proved their mettle on Not the 9 O’Clock News. Mel Smith didn’t make many appearances on the big screen but it was the perfect format for the subtle nuance of his squishy countenance – flitting seamlessly between tetchy insolence, twinkly-eyed pathos, insecure pomposity and desperate heartbreak, all in the tightening and loosening of those big silly lips. Morons consistently hints at a cinematic comedy career that could have been, had this film and the duo’s second cinematic outing Wilt (1989) not been such damp squibs commercially. Smith ended up behind the camera instead.

The real secret of Moron from Outer Space’s success, its wry, subtle moments, its brilliant lampoon of Hollywood film language, was its director Mike Hodges, famous for Get Carter (1971), Flash Gordon (1980) and the less-well-known sci-fi thriller The Terminal Man (1974) – a favourite of Stanley Kubrick’s.

I recently interviewed Hodges as part of our sci-fi season and when I told him I wanted to discuss Morons from Outer Space, his face dropped. Then he started to laugh and told me he hadn’t been asked about that film at all in the nearly 30 years since he finished it.

In his eyes, it was a misfire. He did not work well with Smith & Jones through post-production; they did not trust, or perhaps understand his comedic judgement or cinematic visual satire and the film became far more broad than he had intended. The final indignity being the change of title. The film Hodges had signed on to make was called ‘Illegal Aliens’.

But it wasn’t long before Hodges was talking affectionately about the project, about the joy of skewering what he described as the sentimental “Spielbergian vision of the world” and a fair percentage of our own society, who he saw as “thick, insensitive, violent and ’orrible”. 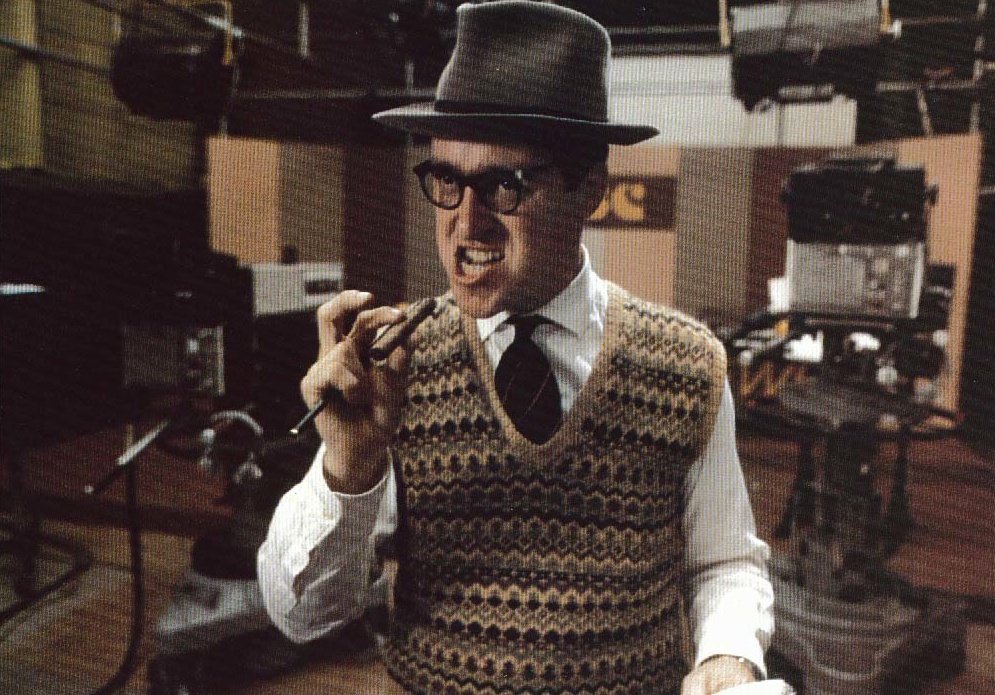 By the time we’d spent the best part of half an hour discussing it, my enthusiasm and knowledge of it in turn baffling and gratifying, he said he was really going to have to sit down and watch it again.

As much as I’d love to proclaim Morons from Outer Space as an overlooked classic, I’m aware that it’s a compromised film. Ultimately, it has become just one of many examples of British TV stars making a failed transition to the big screen.

It’s destined to sit forever among the slurry of Ant & Dec’s Alien Autopsy (2006), Kenny Everett’s Bloodbath at the House of Death (1984), Rik Mayall and Adrian Edmondson’s Guest House Paradiso (1999) and whatever those Keith Lemon and Mrs Brown abominations that I’ve successfully avoided in recent years are. I tried showing it to a group of pals a couple of years ago and found myself having to explain to them why it was good. So maybe it isn’t. But I love it.

Related to Why I love ... Morons from Outer Space