Why I love... Dracula

Is the suave, blood-sucking count in the Hammer version of Bram Stoker’s novel the best of all screen Draculas? Kevin Lyons thinks so… 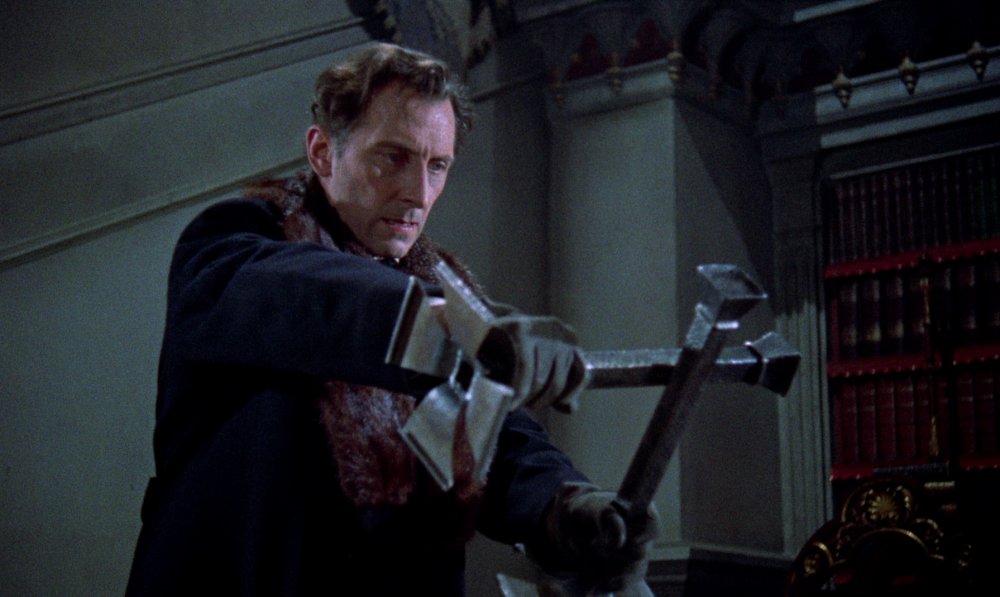 Right from the off, as blood splashes in glorious Technicolor across Dracula’s sarcophagus, it was clear that this was going to be unlike any Dracula we’d seen before. At the time the best known version would still have been Bela Lugosi’s turn for Tod Browning and Universal in 1931 – and if that stodgy telling of the tale wasn’t already showing its age it certainly was after this. From the blood-dripping opening to the breathtaking finale, Hammer’s version simply rattles along at a pace that would have left Browning reeling.

It’s this energy and drive that still impresses the most. Writer Jimmy Sangster’s script may take considerable liberties with the original novel but the film benefits immeasurably from his stripped-down, no-nonsense take on the narrative. The to-ing and fro-ing between Transylvania, Whitby and Hampstead is gone, Sangster relocating the pared down action to Hammer’s now familiar version of the Carpathians that looks, feels and sounds just like the Home Countries. 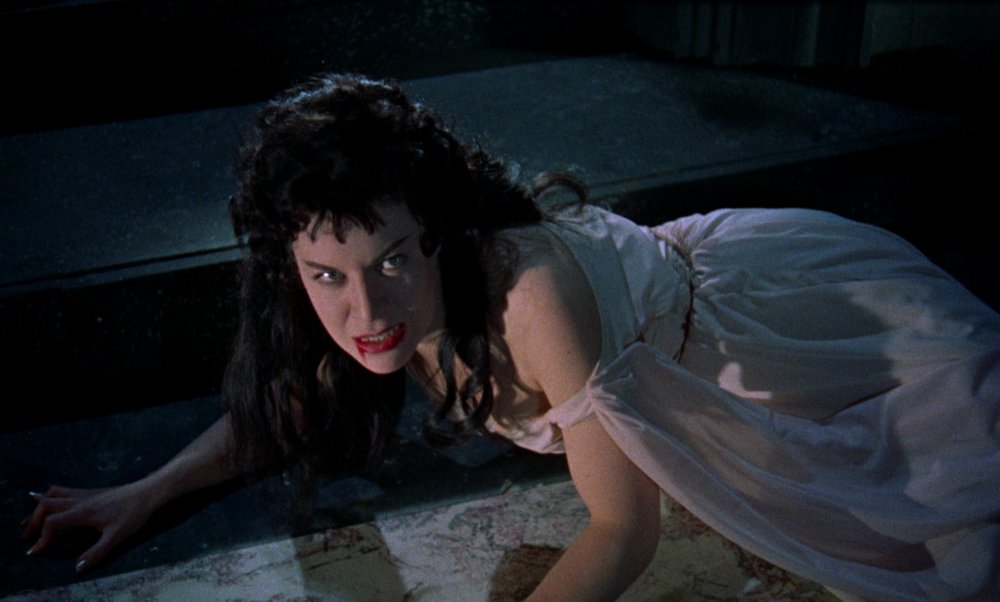 Characters are reconfigured (John Van Eyssen’s Harker is no longer a solicitor arranging the sale of a house but an undercover vampire slayer posing as a librarian but secretly in cahoots with Peter Cushing’s Van Helsing), combined (Valerie Gaunt is on hand as a vampire bride so sensuous that even if Hammer’s budget could have stretched to it they didn’t really need the three in the novel) or done away with altogether (this version is noticeable for having no Renfield).

An occasional pause for breath in the mid-section is the only slowing of the remorseless tempo as director Terence Fisher keeps the narrative flowing far more smoothly here than he’d done in Hammer’s breakthrough horror, The Curse of Frankenstein (1957).

The film’s dynamism perfectly suits its brace of leading men. Christopher Lee is extraordinary in the title role, still by far and away the best of all screen Draculas. Charming and civil, feral and raging, brooding and sensual, he’s a world away from Lugosi. His ferocious anger at finding his bride trying to bite Harker is genuinely terrifying; his sudden appearance in a doorway, blood smeared around his snarling mouth an iconic moment in British horror cinema. The switch from the urbane and attractive host in his opening scenes, through sinister captor to snarling, savage monster, all in the space of five minutes, is typical of the film’s vitality. 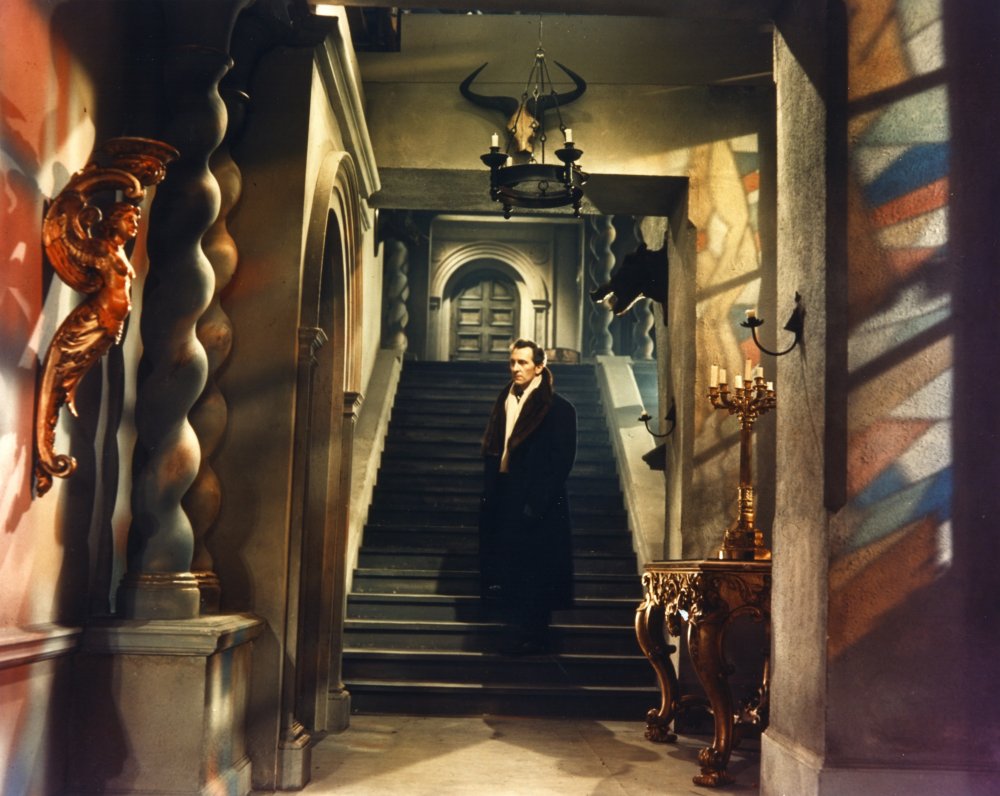 Peter Cushing makes for a forceful, athletic Van Helsing, a far cry from Edward Van Sloan’s rather fusty old duffer in the Browning film. This Van Helsing is a very modern scientist, likening vampirism to drug addiction, dismissing as myth the ability of the vampire to transform into a bat (an edict ignored in the sequels) and recording his thoughts on new-fangled phonographic rolls.

But he’s also a dashing man of action, resourceful, driven and so committed to his cause that he can often seem as dangerous and frightening as his quarry. Rather than stand back and allow the other male characters to do the heavy lifting as Van Sloan had done in 1931, Cushing’s Van Helsing is quite content to get his hands dirty and comes equipped with a small arsenal of stakes and crucifixes, the tools of his grisly trade.

Indeed so fed up was Cushing of just whipping out another crucifix when it was needed that the actor dreamed up the memorable finale. Van Helsing tears down the curtains in Dracula’s library and forces the vampire back into the deadly rays of the morning sun with an improvised cross fashioned from a pair of candlesticks, giving the film a climax as energetic and vibrant as the rest of the film.

Hammer became British horror’s first superstars in the wake of Dracula and turned out a series of sequels. The first, The Brides of Dracula (1960) is among the studio’s finest hours-and-a-half and although the rest are (mostly) interesting none were a match for this original. Not one of the sequels – and indeed few of the subsequent Hammer films, wonderful though many of them are – were ever able to capture the drive and vigour of Dracula.

In 1974 Fisher perhaps revealed to Gary Parfitt of Hammer fanzine Little Shoppe of Horrors the simple reason why: “Everything was right about that film; the script, the casting, everything just clicked. The chemistry just worked the whole way. A wonderful experience.”