Two films from 1942 reveal the devastation caused by German bombing raids in the south-west of England, when homes, ancient buildings and medieval cathedrals all became unlikely targets of the Nazi campaign. 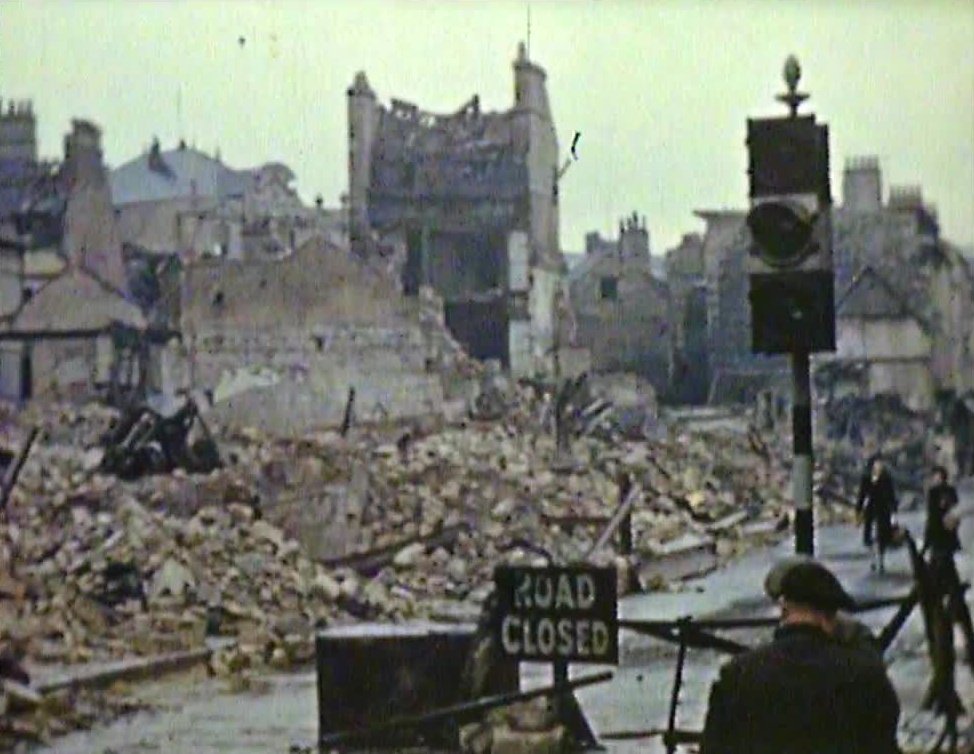 Everyone knows about the London Blitz, and those who know their WWII history will know of the destruction of Coventry and the raids on industrial cities of the north and the ports of the east and south. But the South West? It seems so unlikely – why bomb Bath? Or Bristol, or Exeter? Our image of the West Country is nearly always of a tranquil, rural idyll, a timeless place of high-hedged lanes and thatched cottages – the worlds of Trollope’s Barsetshire, Jane Austen’s Bath and Thomas Hardy’s Wessex.

But two films from 1942, The Blitzed Cities of Bristol and Bath and Exeter after the Blitz, show us the all-too-real aftermath of German bombing raids. The familiar sights – of rubble and twisted metal and stunned locals, and smouldering ruins being picked over by ARP men – seem strangely incongruous so far from the capital. In fact, Bristol was the fifth most-bombed city in the UK, despite being ostensibly less of a military target than some (although it had an airfield and a port). But Bath and Exeter were not military targets. Apart from the odd stray bombs dropped by lone raiders, they should have been safe. 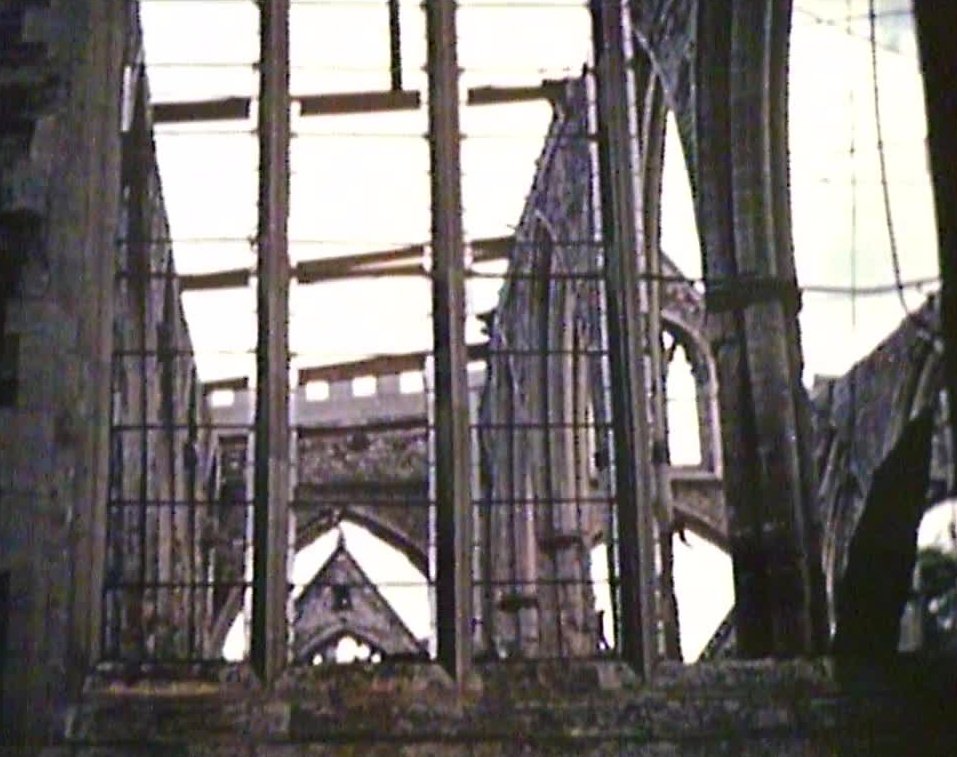 What these films provide is visual evidence of the specific bombing missions known as the ‘Baedeker raids’, ordered personally by Hitler in retaliation for the Allied bombing of Lübeck in February 1942, and targeting cultural and historic centres rather than military objectives. The beautiful city of Lübeck was, in Sir Arthur ‘Bomber’ Harris’s chilling words: “not a vital target, but it seemed to me better to destroy an industrial town of moderate importance than to fail to destroy a large industrial city”.

As can be seen in the two films, these revenge raids on British cities of the South West did considerable damage to ancient buildings, medieval cathedrals and the glories of Georgian Bath – and, of course, to thousands of homes and business premises.

Both films are made by amateur or semi-professional cameramen, replete with too-fast pans and repetitions. They are a far cry from polished productions such as Fires Were Started (1943) or London Can Take It! (1940). But this is in their nature. They were made as films of record, documenting the damage to specific buildings and streets as well as recording the mobile kitchens set up to aid the homeless, the fire brigades and demolition gangs, and even the occasional human touch – including an old man looking at the ruins of a house where his wife died. 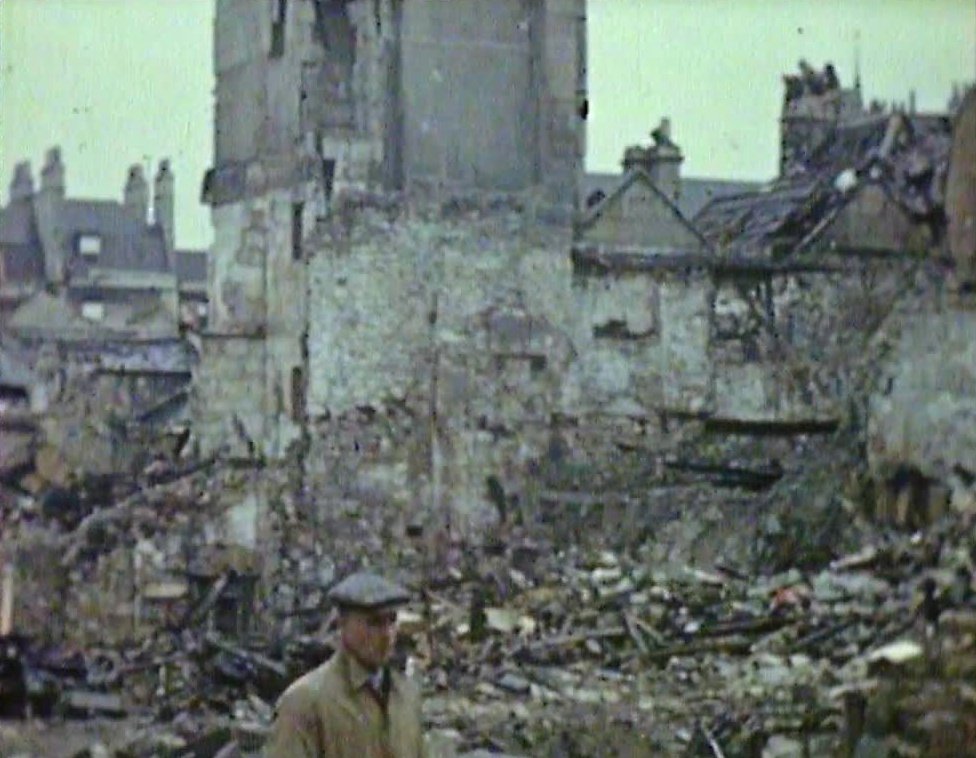 The Blitzed Cities of Bristol and Bath was commissioned by a ‘Mr Fear’ (born in Chew Magna but now resident in Kansas City, an intertitle tells us) and made by Dunscombe’s, a firm of opticians and photographers – which may explain why the film is in colour. This is unusual as film was rationed during the war and colour stock was almost never available.

The commission also explains why the film begins with scenes in the sleepy village of Chew Magna. An intertitle announces: “the only evidence of wartime activity is the mobile first aid ambulance”. Had the cameraman only known just how ironic this was! For Chew Magna was, secretly, a ‘QL site’: a decoy for the Luftwaffe seeking to drop their bombs on Bristol by night. Lights would be set up to imitate airstrips, or the railway sidings and marshalling yards of the Bristol docks. Another nearby decoy site, at Black Down in the Mendips, was designed by technicians from Shepperton Film Studios, who were also churning out dummy planes and tanks for the North Africa ‘dirty tricks’ campaign.

Exeter after the Blitz seems to be rushes or production footage shot by the Dartington Hall Film Unit, based at the Devon stately home, from where it made documentaries during the war which were distributed throughout the region by the Ministry of Information. It has been suggested that, since the Baedeker raids were essentially an attack on the confidence and morale of the British nation, Churchill wanted to minimise reporting of them. The Germans, on the other hand, did their utmost to make capital out of the raids. Following the bombing of 3-4 May 1942, German radio declared, “Exeter is the jewel of the west; we have destroyed that jewel, and we will return to finish the job.” But they didn’t come back, and soon the raids ceased altogether as British anti-aircraft units became more active and there were more strategic uses for German planes.

These films demonstrate that the bombing campaigns of the Second World War had more than just a simple military purpose. They show the ruins of medieval and Georgian architecture that were targeted by Germany because they would burn nicely, and because their destruction would crush Britain’s spirit. The British have always closely identified with their history and documents such as these provide a sad memorial to these lost wonders.

Related to Why bomb Bath? – Blitzed cities captured on film