Where to begin with Takeshi Kitano

Your next obsession: the idiosyncratic cinema of Japanese megastar ‘Beat’ Takeshi Kitano 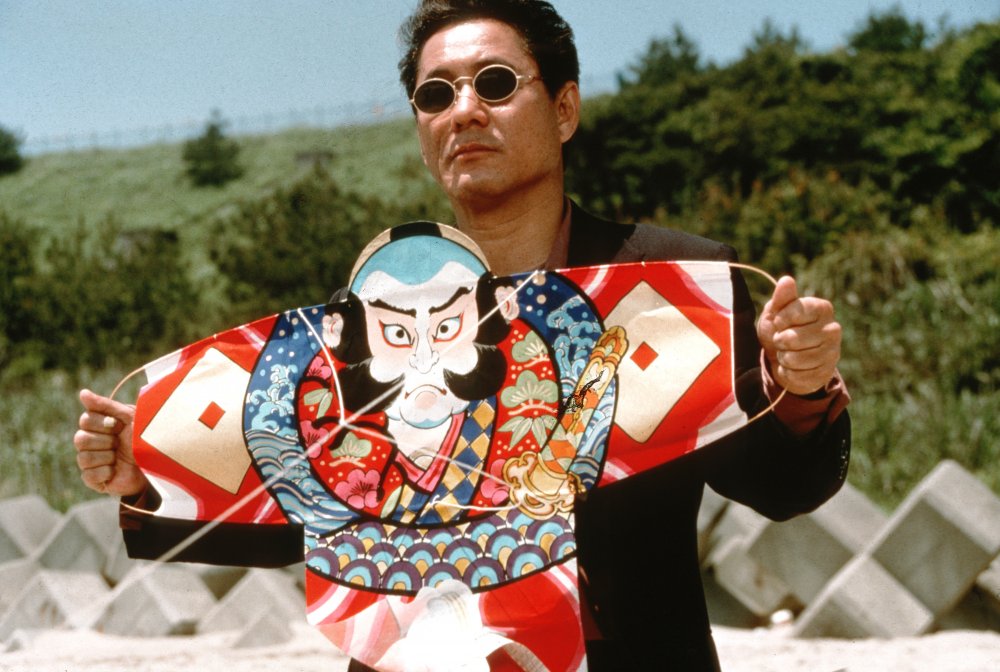 During the 1990s, the face of Japanese cinema projected internationally was almost entirely that of one man. With titles such as Sonatine (1993), Hana-bi (1997) and Brother (2000), Takeshi Kitano represented the ultimate actor-writer-director package. In these pictures he gives a succession of domineering turns as world-weary, self-destructive cops, or gang bosses whose unpredictable fits of savagery place them way outside the boundaries of everyday society. Typically, his eyes are obscured by dark glasses, while his cold, dispassionate demeanour only fleetingly breaks into rictus-like grins.

Kitano’s identity is stamped over his films in other ways too. Just as noteworthy is the spare, uncluttered and highly idiosyncratic visual approach, and the unpredictability of his editing rhythms (since 1991 he’s edited all his films). While other directors frame their action sequences by way of intricately choreographed bullet ballets, relayed in disorienting flurries of close-ups and rapid edits, Kitano kept the viewer distant and detached. His scenes unfolded sedately in immaculately composed long shots, building a dread sense of anticipation before exploding into violence with only the scantest of warnings. 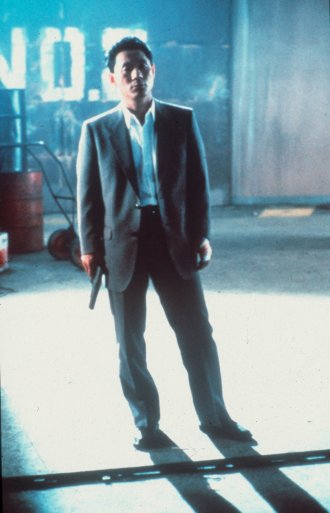 But was ‘Takeshi Kitano, international auteur’ just a mask – the more serious half to his much better-known, fast-talking, comic alter-ego in Japan, ‘Beat’ Takeshi? It’s the latter persona who continues to dominate national TV screens, with his unique brand of potty-mouthed punditry, practical joking and penchant for mocking the national mindset. And is this the same Takeshi Kitano behind the scattershot gag-fest of Getting Any? (1994), a bawdy cinematic knockabout comprised of an increasingly ludicrous series of skits initiated by a young man’s attempts to get his leg over?

He’s certainly a difficult one to pin down, that man Kitano. His body of work as a director, comprising 17 films spanning from Violent Cop (1989) to Ryuzo and the Seven Henchmen (2015), might best be seen as a project of deconstruction, even destruction, of the familiar funnyman image he worked so hard to establish throughout the 1970s and 80s.

Local audiences allegedly tittered as he awkwardly mangled his English-language lines in his first major film role, as the brutal camp prison guard in Nagisa Oshima’s Merry Christmas Mr. Lawrence (1983). But the laughter had long simmered down by the time Hana-bi was awarded the Golden Lion at Venice in 1997, and, while the past decade has seen Kitano going rather off the boil, there’s no denying the impact that his first run of films made outside of Japan.

In a career marked by subversion – both of his own star persona and of popular genres such as the cop and yakuza movie – Kitano’s debut, Violent Cop (1989), represents one of his more orthodox outings. It’s a gritty revenge thriller, once described as “Dirty Harry meets The Searchers”, in which he plays volatile law enforcer Detective Azuma, who not only doesn’t do things by the book but also roughly throws it aside when a gang of drug dealers, suspected of murdering a colleague, kidnap his emotionally disturbed sister. 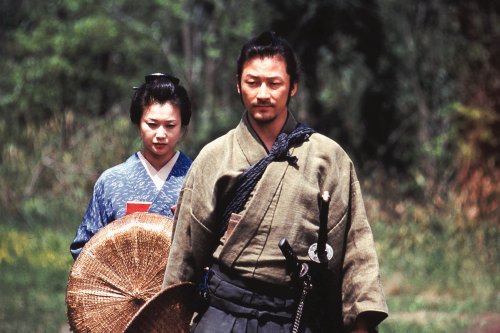 Already cast in the lead, Kitano took over the directing reins after half-jokingly saying he’d step up to the plate when the originally appointed director, Kinji Fukasaku, dropped out of the project. The result was dark and undeniably shocking, especially for Japanese audiences lured in by the original theatrical poster. This presented a full-length body shot of the comedian glaring blankly at the camera, emblazoned with the original title text, which translates directly as “That Man is Brutal”. A British equivalent might have been if Ben Elton had replaced Michael Winner to direct himself in Death Wish.

Alternatively, you could dive in with the considerably less abrasive Zatoichi (2003), in which a peroxide-headed Kitano takes the role of the legendary blind swordsman originally played by Shintaro Katsu in a cult series of 26 films and four television series made between 1962 and 1989. Kitano’s first period drama is full of swashbuckling action, comic interludes and a Stomp-inspired finale featuring all the assembled cast members. It marked his commercial zenith in Japan, before the trilogy of Takeshis’ (2005), Glory to the Filmmaker! (2007) and Achilles and the Tortoise (2008) marked a self-indulgent period that his reputation has struggled to recover from. 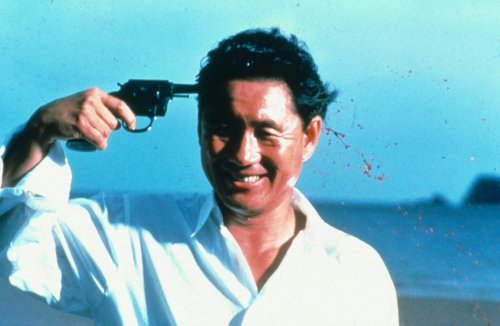 A melancholic air descended over many of Kitano’s movies in the mid-90s, around the time of the motorcycle accident in 1994 that left his face half-paralysed, and which he later described as an “unconscious suicide attempt”.

Anticipating the event came what is seen by many as his signature work, Sonatine, an existential take on the yakuza genre. Kitano takes centre stage as Murakawa, a jaded gangster with thoughts of retirement who is dispatched by his boss to the semi-tropical beachside paradise of Okinawa to help out in a local turf war, only to have most of his cohorts rubbed out in a bloody skirmish. The ensuing film explores the psychology of those who live on the edge, as the handful of survivors bide their time playing childish beach games while awaiting the decisive battle that may or may not end in their deaths.

Often seen as his crowning achievement, Hana-bi (1997) inhabits similar territory, with Kitano casting himself as a cop facing a mental breakdown due to the ongoing stress of a hefty debt to a local yakuza group, his wife’s terminal leukaemia and his involvement in an accident that led to a colleague’s confinement to a wheelchair. Though the literally translated English-language title of Fireworks signals a violence-as-spectacle aesthetic, the key to the poignancy of this heartfelt work is hinted at by the composite characters of ‘flower’ and ‘fire’ in the original Japanese title, suggesting the juxtaposition of tenderness and pain, and of creation and destruction, that fuels the drama. As with much of his work in this vein, the elliptical editing style ensures that the much-touted violence actually remains between the frames – implicit, imagined and unseen – and, when it does occur, is all the more shocking for it. 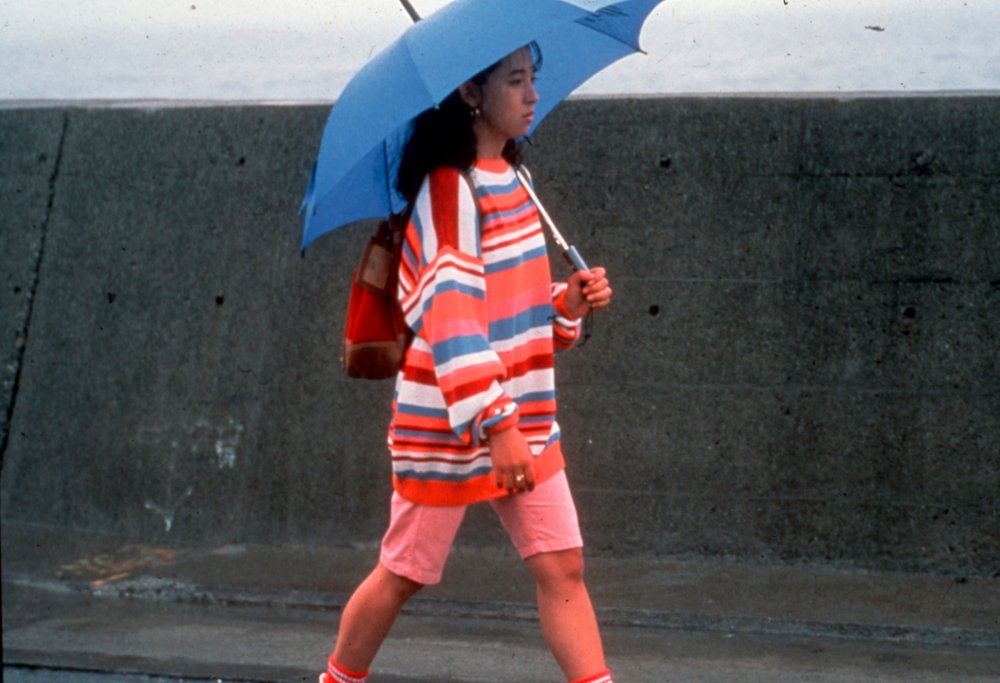 In contrast, it’s stillness that dominates A Scene at the Sea (1991), a disarming portrait of a deaf refuse collector who seeks solace through surfing. Kitano’s third film as a director, the first that he edited himself, and the first in which he does not appear, is also his most minimalistic and lyrical. Meanwhile, Kids Return (1996), a semi-autobiographical account of two school friends who go off the rails and drift apart, is undoubtedly his most personal.

Kitano’s stab at transposing his gangster shtick to Los Angeles in his first English-language film, Brother (2000), seemed like a major career misstep. Following a near flawless run of films throughout the 1990s, the performances felt muddied in translation in an overly ambitious attempt at expanding his audience base beyond the international arthouse.

Nevertheless, Brother is at least curiously entertaining, which is more than can be said for his subsequent attempt at manufacturing a domestic hit. Though it has its admirers, Dolls (2002) is a real trudge. An omnibus of three stories about lovers eternally bound together by fate, which takes Chikamatsu Monzaemon’s 18th-century bunraku play, The Courier for Hell, as its linking device, the film comes across as rather too desperate to please. Costumes, art direction and Kitano regular Katsumi Yanagijima’s vibrant camerawork are all undeniably pretty, but, beyond its rather self-conscious Japanese aesthetic, it’s an inanimate affair.