Where to begin with Jacques Demy

Your next obsession: the yearning romanticism of Jacques Demy 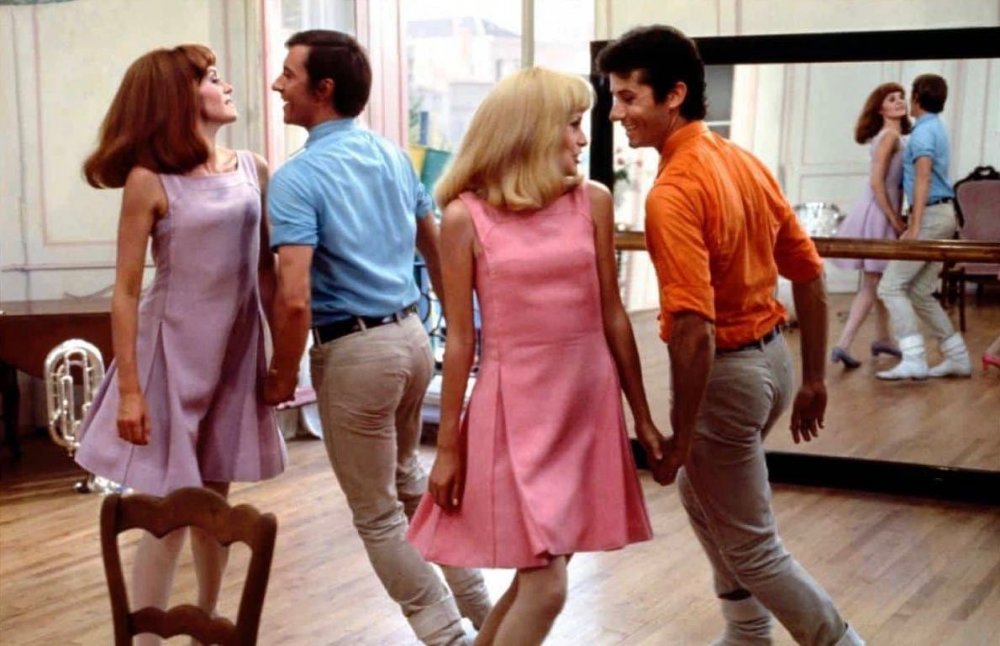 The Umbrellas of Cherbourg returns to cinemas on 6 December 2019

Were it not for the surprising box-office success of La La Land – a movie partly inspired by the musical films of Jacques Demy –  it might prove very difficult to persuade today’s audiences that the late French director’s work is worth exploring. After all, his films are rather like fairytales (indeed, 1970’s Peau d’âne and 1972’s The Pied Piper are actual fairytales), are mostly set in unremarkable provincial towns and generally centre on characters forlornly fantasising about finding enduring bliss with an idealised lover who probably exists only in daydreams or the distortions of memory.

What’s more, in Demy’s very best known films the characters voice their thoughts and feelings about this quest for happiness by singing. What, doubters might reasonably ask, has that to do with modern life? 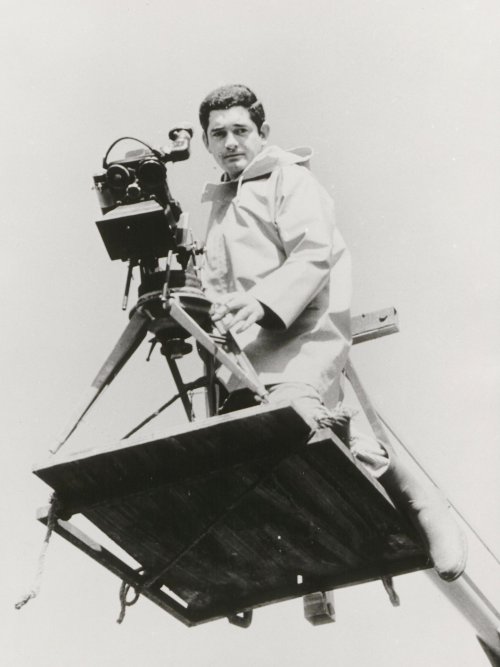 Well, quite a lot. There is undoubtedly an element of fantasy in Demy’s films, in that the world he creates on screen – almost but not quite like ours, with its singing and dancing, its carefully coded colours and costumes, and its meticulously orchestrated coincidences, brief encounters and twists of fate – is very conspicuously a cinematic construction. Yet what makes his finest work so special is the way he firmly grounds this filmic artifice in a robust emotional and psychological authenticity. Yes, his characters are looking for love, but they are doing so in a world where financial problems, unexpected pregnancies, unemployment, strikes, loneliness, boredom, jealousy, illness, crime, war and death exist.

Moreover, they are doing so in the knowledge that the happiness that comes with love may turn out to be disappointing or ephemeral. But that doesn’t mean they’ll give up hoping, dreaming and looking…

It’s fair to say, then, that Demy’s vision of life’s vicissitudes is in keeping with ‘reality’; it just so happens that, by way of sharing his personal worldview, he revelled in the various opportunities afforded him as a filmmaker. A cinephile, he loved turning French coastal towns – Nantes, where he grew up, but also Cherbourg, Rochefort, Nice and Marseille (and, in 1969’s Model Shop, Venice Beach) – into magical realms that vividly mirrored his characters’ emotions.

Music – usually composed by the late Michel Legrand – was also a tool of Demy’s trade, often matched to the writer-director’s own wonderfully inventive lyrics, while the extraordinarily expressive art direction and costume designs of husband-and-wife team Bernard Evein and Jacqueline Moreau are also crucial to the conjuring act.

The best place to start – The Umbrellas of Cherbourg

The Umbrellas of Cherbourg (1964) remains Demy’s best known film to this day. Though those wholly unfamiliar with his work may initially balk at the idea of a movie where every single word is sung, most will probably be won over (and in tears) by the end of its tale of rapt teenage romance undermined by military service, maternal interference and social convention. Its groundbreaking combination of vibrant colours, elegant camerawork, a radiant Catherine Deneuve, Legrand’s poignant score and Demy’s pointed libretto usually does the trick.

But for those who’d prefer to sample something a little less heady, good starting points would be either of his earlier two features, both brilliantly shot in black and white and with Legrand’s music used only as entrancing accompaniment to the lovely images. Lola (1961) boasts Anouk Aimée as a cabaret dancer and single mother courted by various admirers as she awaits the (improbable?) return from America of the love of her life, while La Baie des Anges (1963) stars a dazzlingly blonde Jeanne Moreau as a compulsive gambler who takes up with a bank clerk new to the casinos.

Elegant, wry, witty and littered with exhilaratingly fluent moments that serve as an imaginative counterpoint to the stories’ darker undertones, the films offer clear evidence of Demy’s admiration for the ornate beauty of the work of Max Ophuls (to whom Lola is dedicated) and Josef von Sternberg. 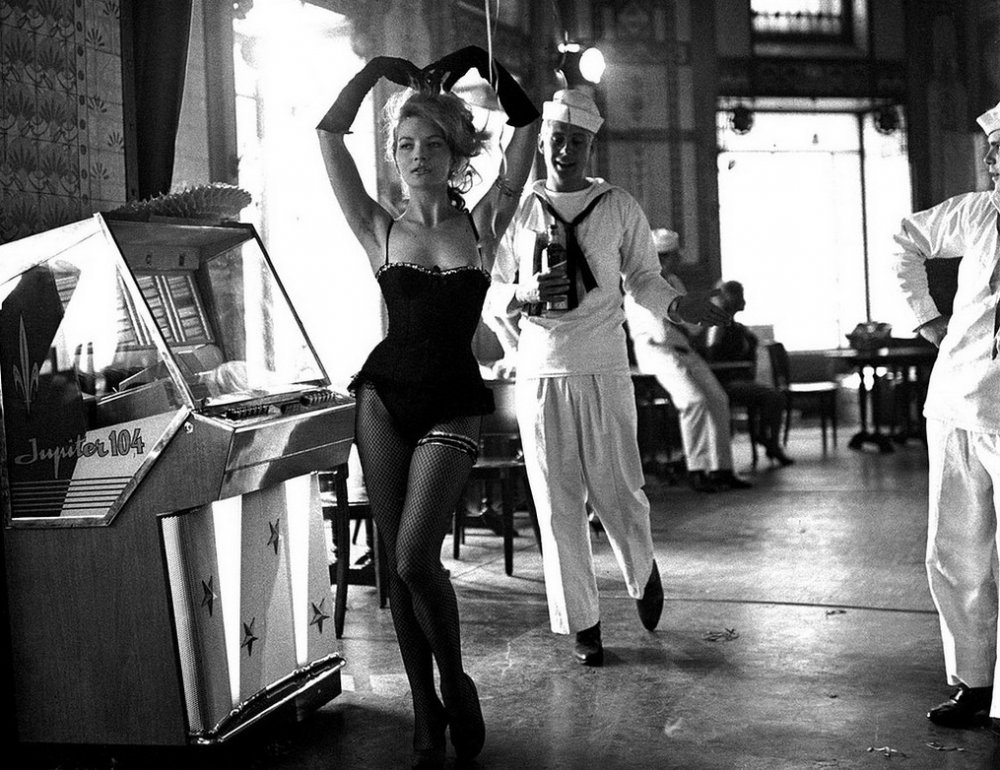 The most obvious next stop would be Les Demoiselles de Rochefort (1967), arguably Demy’s most utterly enchanting film, a complex (but wholly accessible and entertaining) account of a series of close-but-sometimes-missed encounters between a gallery of lovelorn individuals over one long weekend when a travelling carnival turns up in the titular town – its buildings painted in pastel hues to match the bittersweet mood of the movie. 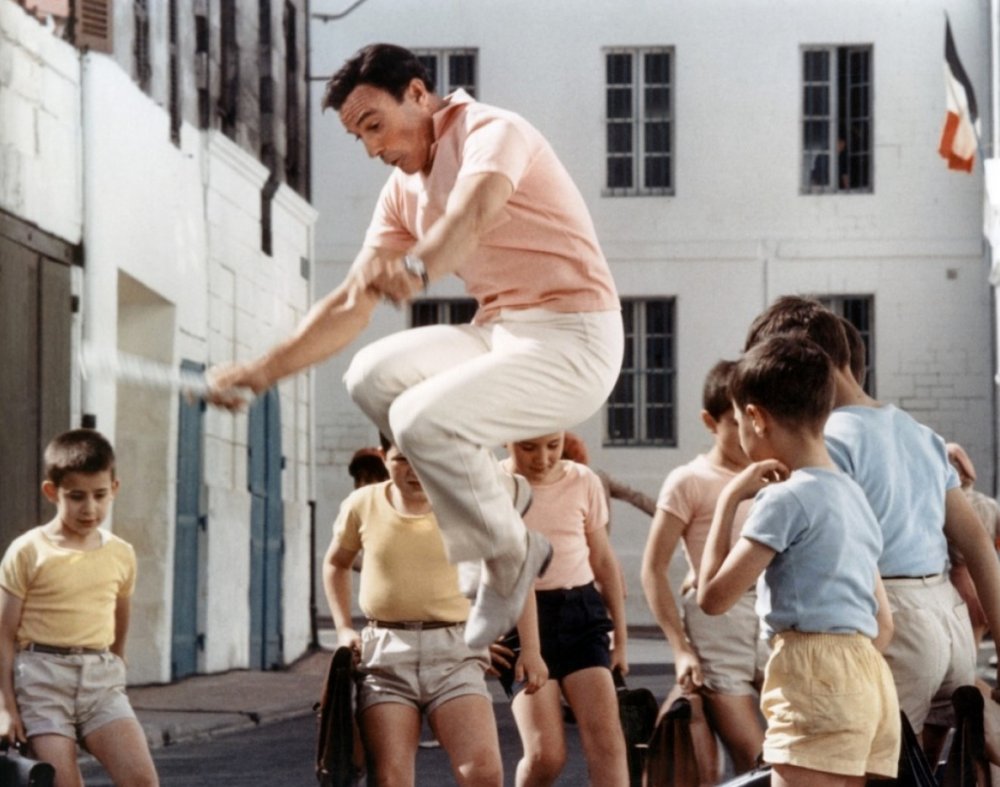 When the film was released, some critics complained that much of the dancing simply wasn’t up to Hollywood standards, but they had wrongly assumed Demy had been trying to make an MGM-style musical. In fact, the film is simply a superlative example of the writer-director having created his own profoundly personal world, which happens, in passing, to make a few affectionate nods to its American predecessors. The exuberant dancing is sheer energy, while the music merges jazz, neoclassical, pop and pure Legrand lyricism to memorable effect. 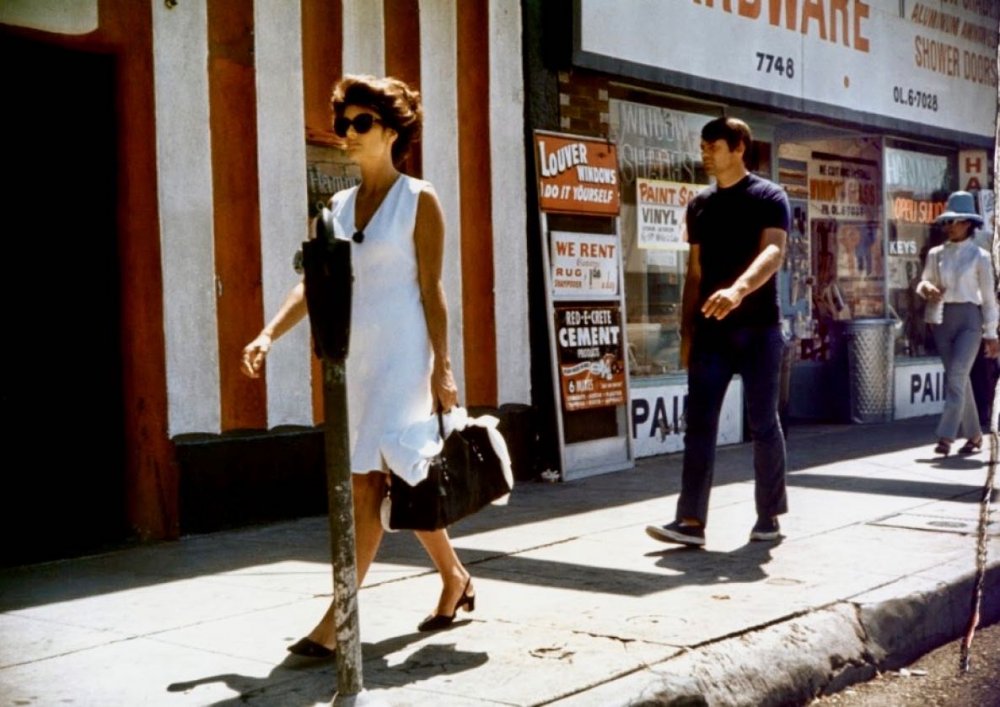 Next, it makes sense to move on to Model Shop and Une chambre en ville (1982), each as great, in their own different ways, as anything Demy ever made. Shot while Demy and his wife Agnès Varda were living in California, the former is notable not only for being one of the great films about Los Angeles – a city at once glamorous and seedy, and all that driving! – but also for the way it reintroduces us to ‘Lola’ from his first feature, now divorced and reduced to working as a pin-up model for photographers.

One of the many fascinating and distinctive aspects of Demy’s cinema is that characters from one film may turn up unexpectedly in another (a man who courts the Deneuve character in The Umbrellas of Cherbourg, for example, sings a few lines about how he once met Lola in Nantes); the director often spoke of his desire – born of his admiration for Balzac – to make a great many films that were all connected to each other by means of certain shared characters. 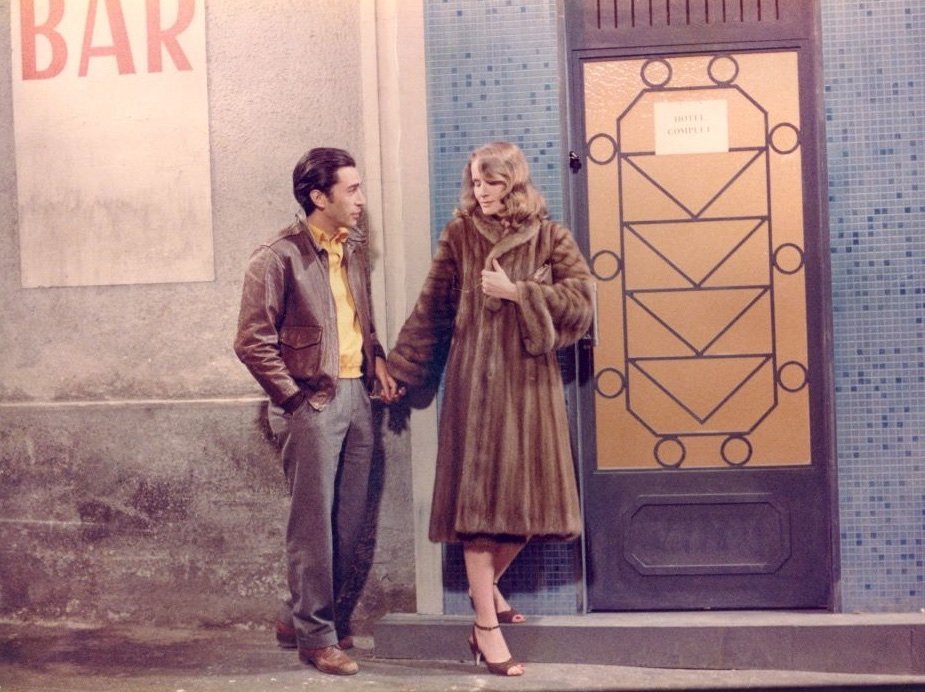 Largely because it was for many years available only in unsubtitled prints, Une chambre en ville remains the least well-known of Demy’s finest films, even though it was very close to his heart, inspired as it was by events in his childhood. Like Umbrellas, it’s entirely sung (this time to music by Michel Colombier), though the storyline hardly sounds like the stuff of film musicals. Against the background of an often violent Nantes dockers’ strike, a passionate affair begins between a laid-off docker about to break up with his pregnant girlfriend, and his landlady’s daughter, who walks the streets seeking sex with strangers as a way of wreaking revenge on her oppressively possessive husband.

With its intense emotions, fraught conflicts and heated score, it’s Demy’s darkest film by far, and closer to opera than to the traditional musical, but it’s no less impressive than Umbrellas or Les Demoiselles… in its very eloquent cinematic artifice.

Although it’s regarded in France as a national treasure (and was Demy’s biggest box office hit), it’s probably not a good idea to begin with 1970’s Peau d’âne (Donkey Skin). Notwithstanding a strong cast and an intriguing take on sexual mores, this staging of a Charles Perrault fairytale tends to strike many non-French viewers as so much kitsch. 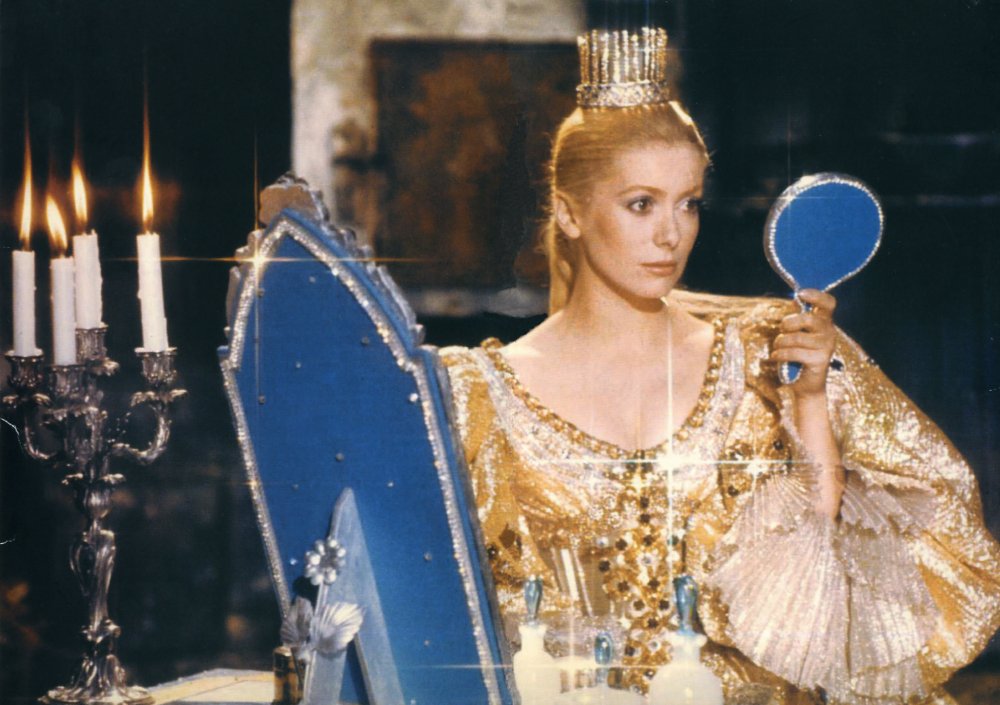 Indeed, with the glorious exception of Une chambre en ville, most of the films Demy made after 1970, however eccentric or inventive, are minor achievements compared with the masterworks of the 60s, though his final feature, Trois places pour le 26 (1988), has its moments, as Yves Montand (sort of playing himself) reminisces and wonders about a long-lost love while rehearsing a show about his life in Marseille.