How the often nightmarish 1970s film of Watership Down cleared the ground for more realistic, less romanticised depictions of our countryside.

• Buy tickets for Watership Down at BFI Southbank 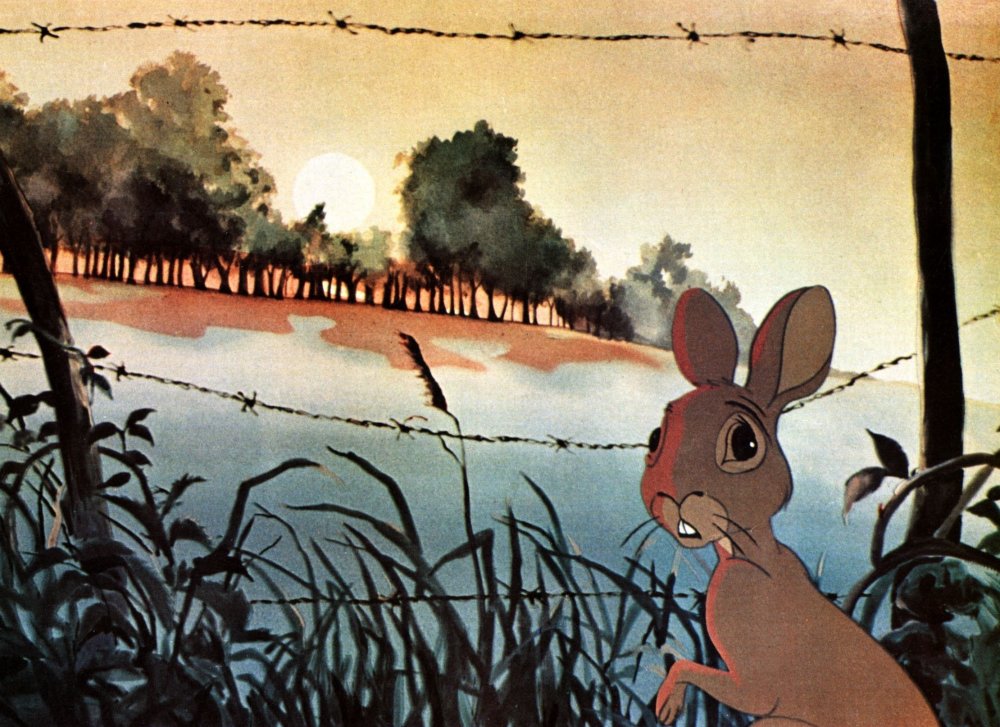 Though based on a children’s book, Martin Rosen’s 1978 adaptation of Richard Adams’ Watership Down addresses some incredibly adult themes of land, power and belonging. Remembered as a terrifying visceral experience by a certain generation of young British cinemagoers, the film is equally a groundbreakingly honest depiction of the reality of Britain’s rural landscape.

Unlike many other representations of our countryside, Watership Down is a narrative that’s both of the land and for the land. It knows that showing recognisable elements often scrubbed out of picture-perfect visions of green and pleasant lands aids rather than sullies the drama. While the landscape in stories by the likes of Enid Blyton or A.A. Milne is a gentle and comfortable place of unfolding yarns, Adams and Rosen both present a place where death and brutality are part of everyday life.

The film follows the rebellious exodus of a group of rabbits from their peaceful warren after one of their clan, Fiver (voiced by Richard Briers), has an apocalyptic vision of their home being destroyed. With the help of his brother, Hazel (John Hurt), they take their concerns to the head of the warren (Ralph Richardson), who ignores their pleas to escape. 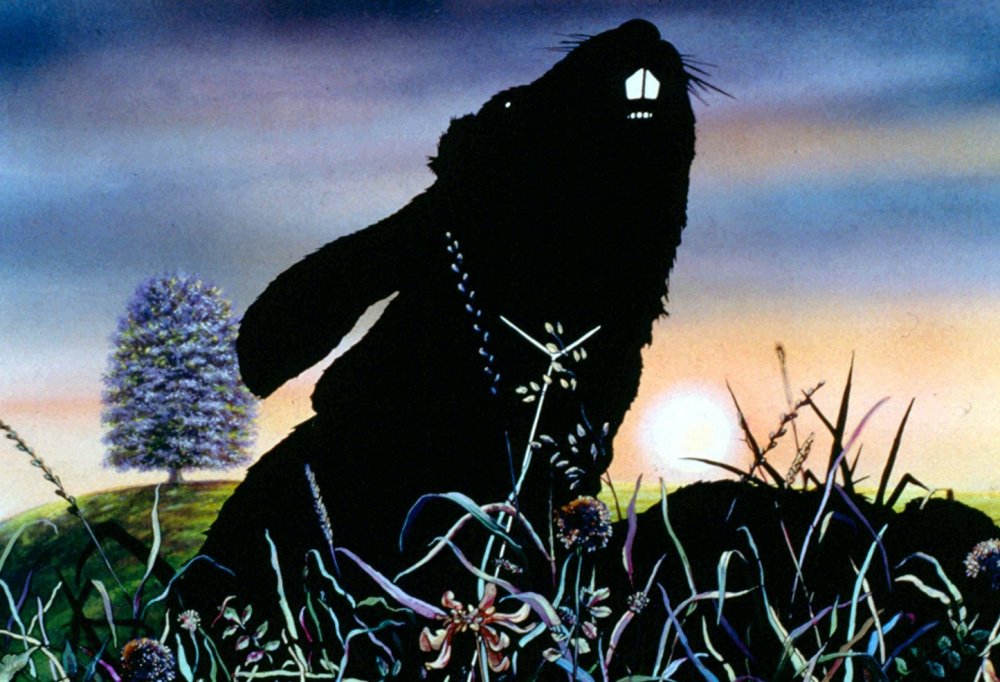 They form a small group who, once past the guards, escape in search of a new home. The group encounters myriad dangers, from snares and myxomatosis to the farmer’s local cat (Lynn Farleigh) and the rats in a church. Finding a perfect hill, but having lost their only female to a hawk, the group decide to infiltrate and release the female rabbits at a nearby farm and later to liberate other females from Efrafa, a fascist rabbit state run by the evil General Woundwort (Harry Andrews). However, not all goes to plan.

This story has many elements that may surprise a modern first-time viewer. The violence on display in Rosen’s animation has a raw and scratchy quality, especially in its very detailed depictions of snare trappings, death by disease and rabbits’ bodies being torn apart in the jaws of a maniacal dog.

The inclusion of a fascist breeding camp, where the female rabbits are forced to remain underground to breed, seems shockingly adult. General Woundwort’s system is more Margaret Atwood’s The Handmaid’s Tale than Beatrix Potter’s Peter Rabbit. But all of these brutalities are balanced with a warmth and genuine understanding of the natural world in which it is set, stemming from the nuanced rendering of the film’s setting of Sandleford. 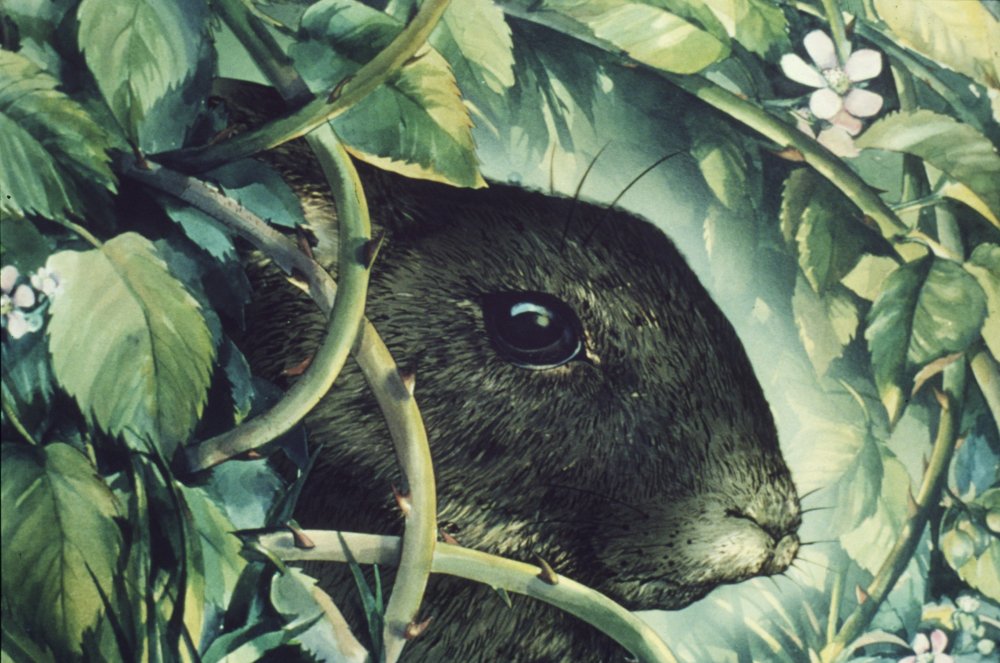 After the folkloric opening detailing the history of the world from the rabbits’ perspective, the titles make it clear that this is the rural landscape as it really is and not simply a chocolate-box vision. At first, visuals of rolling fields fill the screen, almost idyllic in their watercolour designs. The shot continues but, cutting back slowly, the screen draws through the steelwork of a cable pylon, allowing the full view onto the valley before the film’s title appears on screen.

That such an important moment is marked by an object once regularly excluded from depictions of the landscape is telling. The pylon later makes a further appearance, as a marker when leading the dog back to the fascist warren, with an incredibly beautiful and dream-like shot looking up through the structure’s cone. A tree could have easily been used to mark this sequence, but the manmade object that holds up the valley’s humming wires was chosen instead.

Similar objects appear throughout Watership Down, portrayed as an almost organic part of the landscape. This is surprising considering the main crux of the narrative depends on the destruction of the first warren by land developers, where, as Fiver sees in his vision, “The field is covered in blood.” Barbed wire fences litter and border almost every pasture, tarmac roads cut through the grass with their deadly cars, and the rusting old ironwork of a graveyard breaks the skyline. This is the reality of the landscape: corroded, messy but all as much a part of the environment as the trees and the hills. 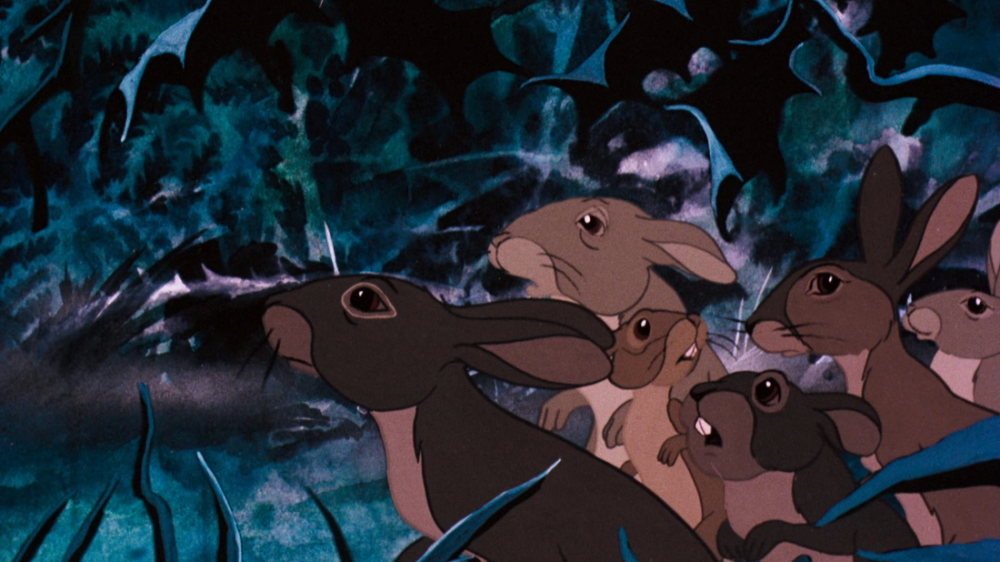 Watership Down’s sense of the land being chaotic has had a profound effect on many rural-set dramas after it. You can see its message in the drama of TV’s The Animals of Farthing Wood (1993-95) as well as in more edgy rural films such as Andrew Grieve’s On the Black Hill (1987) and Andrew Kötting’s This Filthy Earth (2001). Even in the recent spate of brutal countryside films, including Guy Myhill’s The Goob (2014), Hope Dickson Leach’s The Levelling (2016) and Francis Lee’s God’s Own Country (2017), the portrayal of landscape has a lot in common with Watership Down. But with its wealth of mud and blood, surprisingly it’s Rosen’s film that’s the most visceral.

This attitude to the landscape had some cinematic precursors – Philip Trevelyan’s The Moon and the Sledgehammer (1971) and David Gladwell’s Requiem for a Village (1975) both spring to mind. But as (ostensibly) a family film, Watership Down reached a far wider audience, playing an influential role in deromanticising the British countryside on film. At once, pylons and barbed wire took their place among the fields and hills.

Watch the Watership Down trailer