Pull up to the bumper, baby… here’s why the screen career of music icon Grace Jones is worth celebrating. 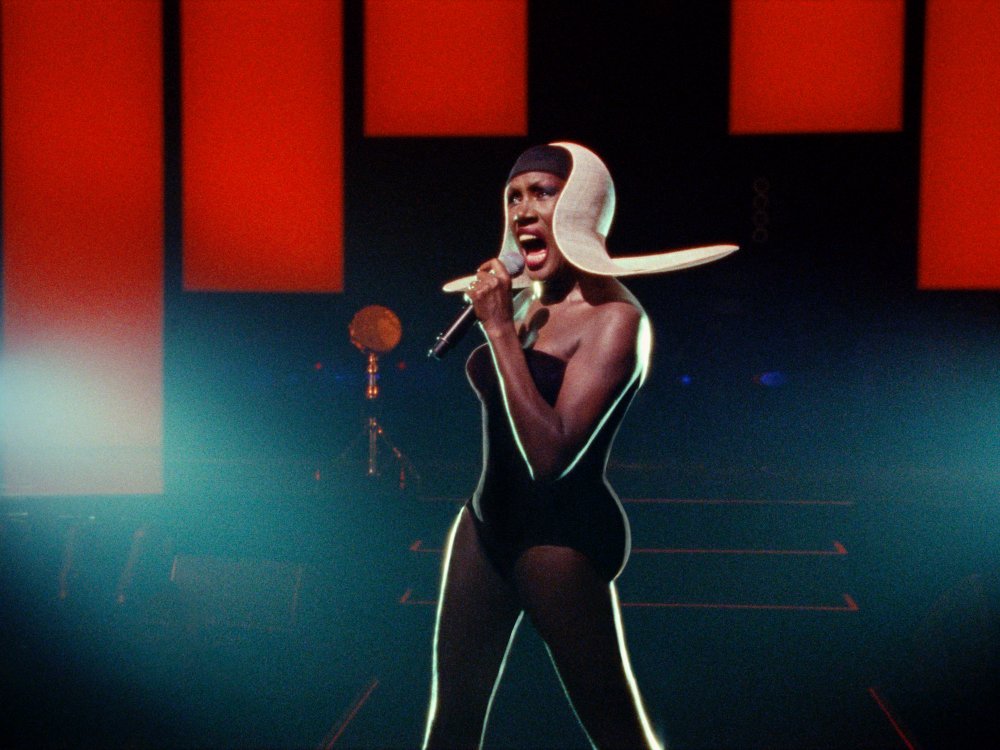 Grace Jones: Bloodlight and Bami, backed with National Lottery funding through the BFI Film Fund, is in cinemas now

Sophie Fiennes’ Grace Jones: Bloodlight and Bami, a new documentary exploring the many sides to this larger-than-life music legend, is a fascinating study of an iconic performer, but it’s not Jones’s first appearance on the big screen. In the 1980s and 90s she dominated a handful of movies, a sideline that is often lost in discussions of her career, which tend to focus on her music and her fierce public persona.

Jones’s movie career started with small roles in blaxploitation flick Gordon’s War (1973) and an uncomfortable cameo in the unwatchable French sex comedy Attention les yeux! (1976), but it wasn’t until the 1980s that her on-screen career really soared, when she appeared in three supporting roles that upstaged Arnold Schwarzenegger, a pack of bloodthirsty vampire strippers and even James Bond. 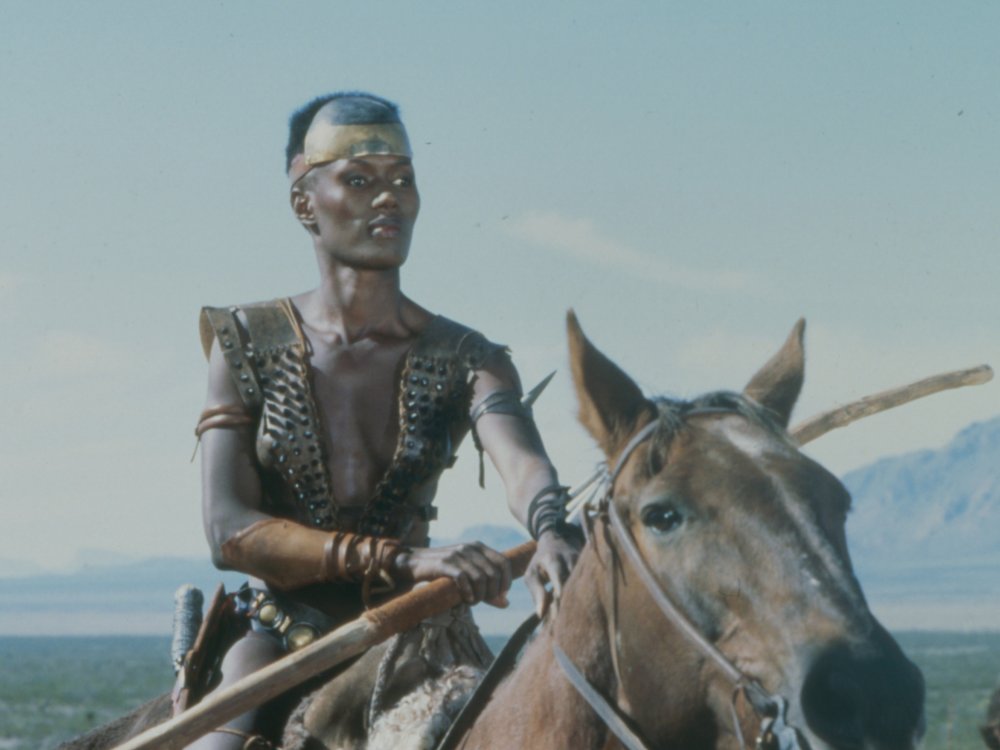 Jones’s first major screen role was in Conan the Destroyer (1984), playing Zula, a bandit warrior who forms an alliance with Conan (Schwarzenegger). It’s the only one of her film roles where she plays someone unambiguously good – later castings would play up her capacity for villainy. Zula is wild and powerful, and Jones sinks her teeth into the role with relish, earning her the first of three acting nominations for a Saturn Award, honouring performances in sci-fi, fantasy and horror films. It’s an intensely physical performance – Jones trained for 18 months for the role, and did the majority of her own stunts.

Zula was a lot of fun, but her film career was about to become much more interesting, when she was cast as May Day in the 14th official James Bond film. A View to a Kill (1985) is one of the weakest of the franchise, but the casting of Jones as the henchman of mad industrialist Max Zorin (Christopher Walken) is inspired. May Day is the most interesting woman Bond ever encountered – few blockbusters would dare cast Roger Moore and Grace Jones as lovers. Unlike in Live and Let Die (1973), Moore’s first 007 film, A View to a Kill doesn’t fetishise the race of Bond’s black lover – May Day is more than his equal. Small wonder it’s she, rather than Walken or main love interest Tanya Roberts, who appears on the poster with Moore. 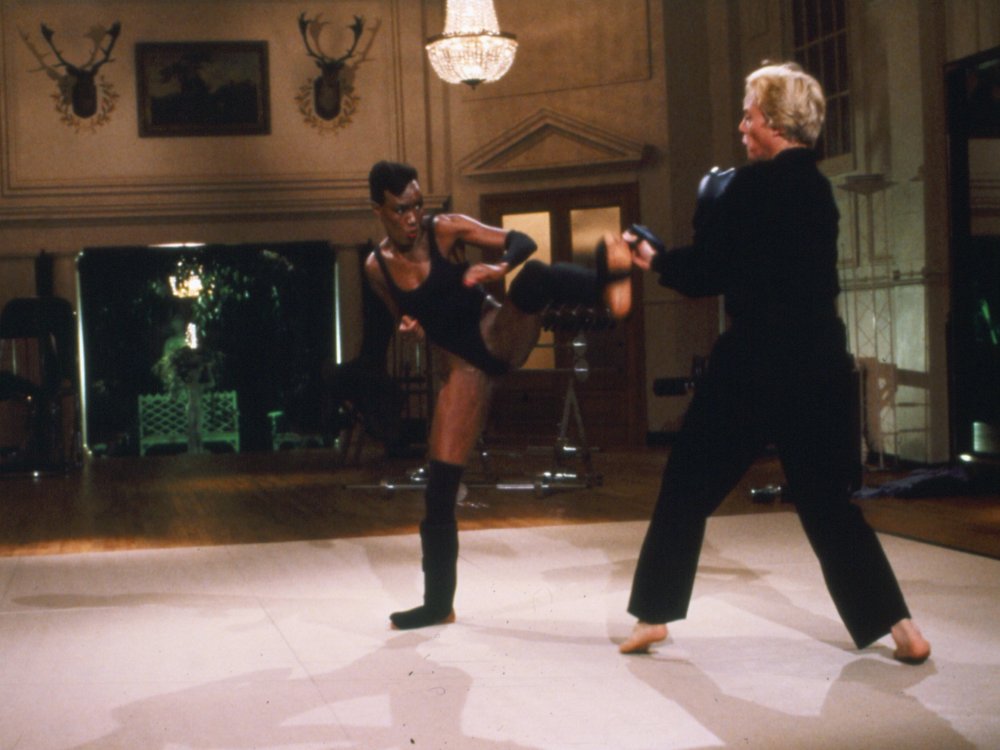 May Day was a woman of few words, but she was downright loquacious compared to Jones’s next character, the wicked Katrina in comedy horror Vamp (1986). Jones appears, caked in white body paint, performing a sensuous and menacing striptease (there isn’t much tease), climaxing the routine by mounting a faceless mannequin. Following this unforgettable entrance, a frat boy goes backstage and tries to seduce the dancer, and soon ends up being her dinner, for Katrina is a vampire queen. Vamp is bathed in gorgeous neon lighting to compensate for a zero budget, most of which presumably went towards Jones’s salary. If so, it was money well spent. 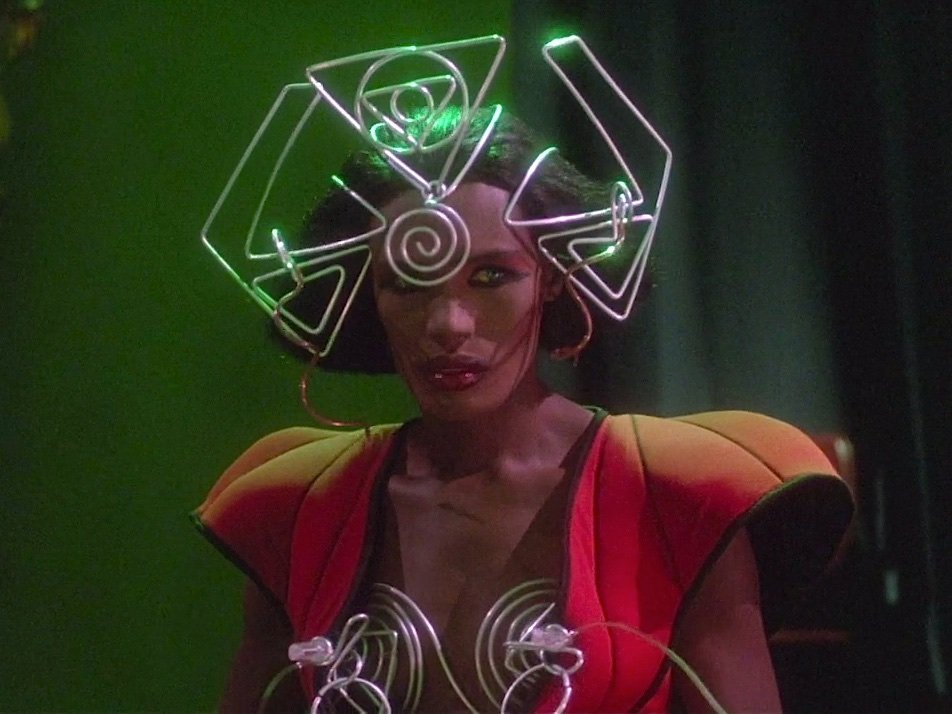 Zula, May Day and Katrina are all unforgettable, but how much of their appeal lies in Jones’s acting ability? Can she act, or is she merely starring in roles that are extensions of her own personality? Certainly she is rarely cast against type. And she has certainly given at least one dreadful performance, unhappily cast as the chief antagonist opposite Hulk Hogan in McCinsey’s Island (1998), a predictably appalling family adventure. Yet one film performance in Jones’s canon stands above the others, tearing the screen apart in a role no one else could have hoped to match.

In Boomerang (1992), an Eddie Murphy vehicle that (despite some unpleasant misogyny) works well as a satire of the advertising industry, Jones plays Strangé, a flamboyant French diva brought in to be the face of a line of cosmetics. She’s a wonderful comic creation, and Jones has never been better on screen. While previous roles emphasised Jones’s physique and unusual sexiness, Strangé allows her to play to her considerable comic strengths. 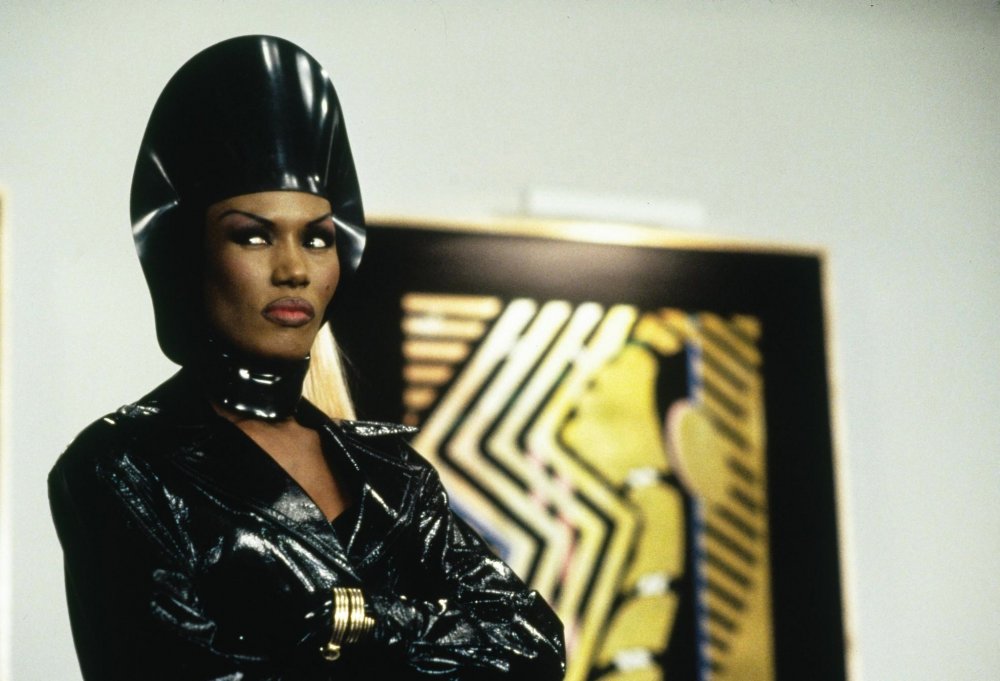 In the 2016 BFI Black Star poll, exploring the best performances by black actors in cinema and TV history, several voters nominated Jones for this role. Among them, Black Cultural Archives curator Jan Asante wrote: “Jones is a comedic joy to behold. Roles like this for women, let alone women of colour, have seldom existed in the entire past century of American cinema.”

From pitching ridiculous names for a new scent (“Wet Spot… Love Puss”) to appearing in a grotesque advert in which she gives birth to a bottle of perfume, it’s a performance free of vanity, and the undoubted highlight of an uneven movie.

A few TV flicks notwithstanding, she hasn’t acted in a feature film since the 1990s. If she ever chooses to return to big screen acting, here’s hoping she opts for a comedy again.