Tony Scott’s True Romance is a loved-up couple-on-the-run movie to rank with the best of them, but what makes it really special are the colourful supporting roles that Tarantino’s script provides for the likes of Christopher Walken, Gary Oldman and Brad Pitt. 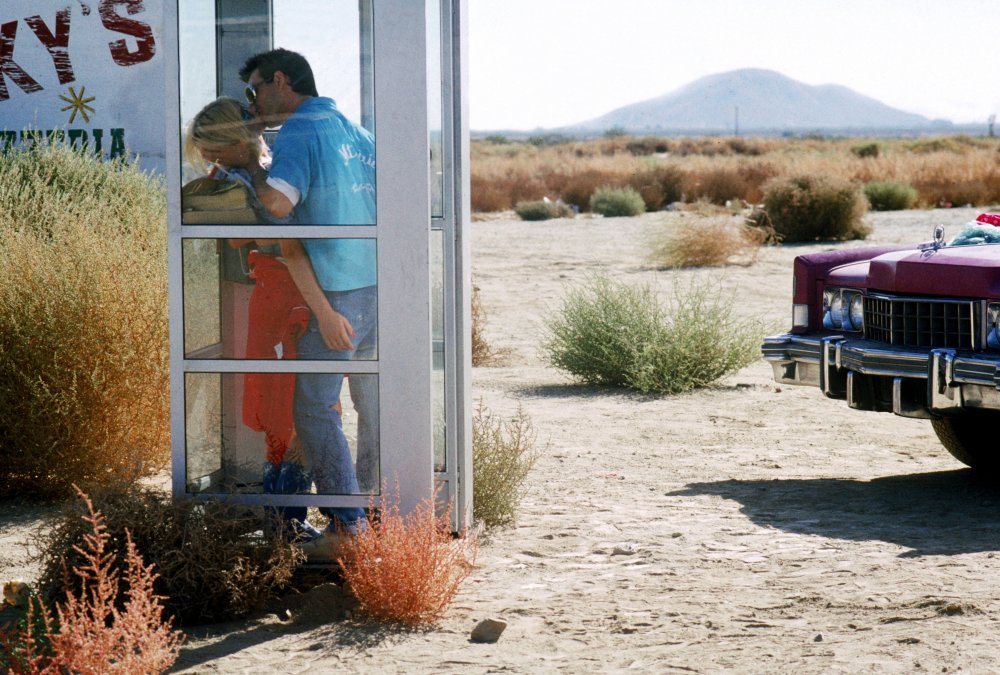 “All you need for a movie is a gun and a girl.” – Jean-Luc Godard

True Romance is back in cinemas nationwide from 20 November 2015.

Judging by the fundamentals of Quentin Tarantino’s script for True Romance (1993), Godard’s famous maxim had as great an influence on his writing as the French auteur’s 1960s visual exuberance did on his directing. The film is unarguably a brash-and-brisk gun-and girl-flick – fast, elemental and funny. But while influenced by the French auteur in this key respect, Tarantino also clearly understood the need to bring a raft of minor characters front and centre.

Clarence Worley (Christian Slater) is a friendless but funny film-and-comic-geek video store clerk living in Detroit. He meets call girl Alabama Whitman (Patricia Arquette), falls in love, and marries her the very next day. Clarence visits Alabama’s pimp to collect her clothing and explain the terms of her resignation. He packs a gun and some witty remarks. Hell does not so much break loose as explode across the screen, lurid and loud like an especially vicious New Year’s Eve party. Consequently, Clarence leaves with a suitcase of cocaine instead of Alabama’s clothing, and the pair flee to LA, hotly pursued by men in no mood to be messed with.

The girl, the gun, the lovers on the run. As story archetypes go, it had been churned out many times before. But what puts the meat on the bones of a film that could have been more hackneyed than a greetings card message is its smaller roles. True Romance is all about the minor characters. In some cases the following offer mere cameos, with others their part is more substantial. Yet no matter how long each of them is on screen, they all leave a vivid impression. 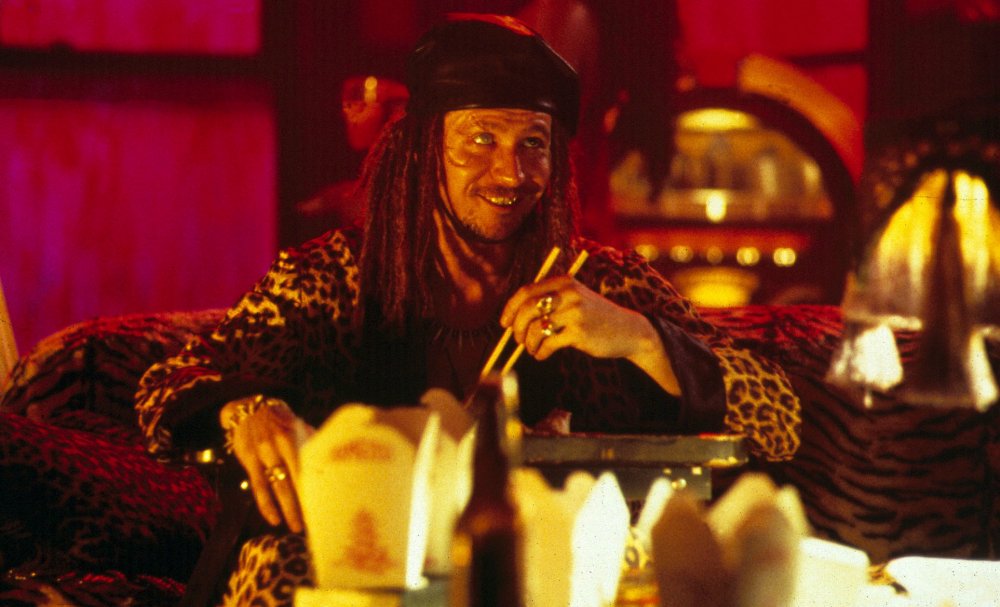 True Romance contains one of cinema’s most memorable wannabe black men: pimp and drug dealer Drexl Spivey. With his cod-Jamaican accent, dreadlocks and striking sartorial style, Gary Oldman’s hilarious portrayal is sure to evoke laughs of self-recognition among every white person to think they were a bit cool for listening to hip-hop. From the multi-coloured shell-suit unzipped down near his navel to the leopard-print dressing gown and leather Kangol cap, the phrase ‘strong look’ was invented for Drexl, his gold teeth and nasty facial scarring providing exquisite finishing touches. In his two scenes Drexl steals drugs, kills, eats Chinese takeaway and has a serious confrontation with Clarence. Such is a pimp’s life. 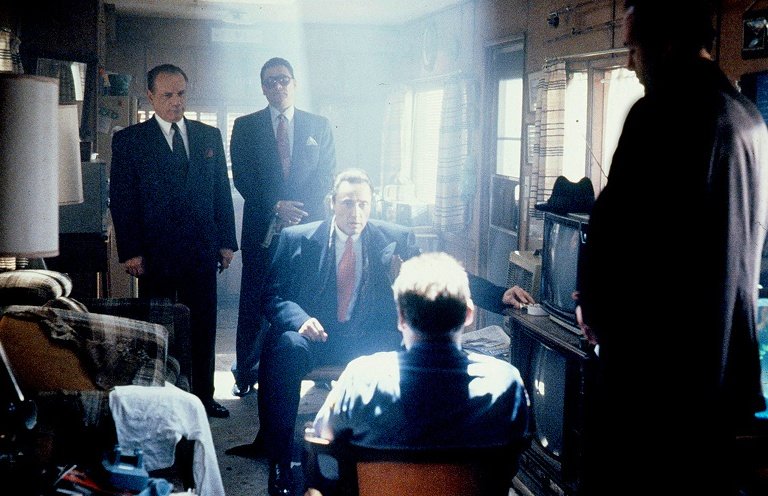 Clarence’s estranged father Clifford (Dennis Hopper) is a former policeman living in a trailer when his son shows up with his new bride. He’s a weary, down-on-his-luck sort but appears neither happy nor miserable, having instead reached a period of middle-aged acquiescence. It’s bad luck that his son has stolen $500,000 worth of Don Vincenzo Coccotti’s cocaine. Christopher Walken plays the Don and when the pair get talking, it’s a masterclass in unexpected underplaying. Two fierce actors, known for their scenery-chewing histrionics and volcanic anger, cooly shooting the breeze. Of course, extreme violence is not far away, but not before Clifford intones an outrageously offensive theory regarding Coccotti’s Sicilian ancestry. 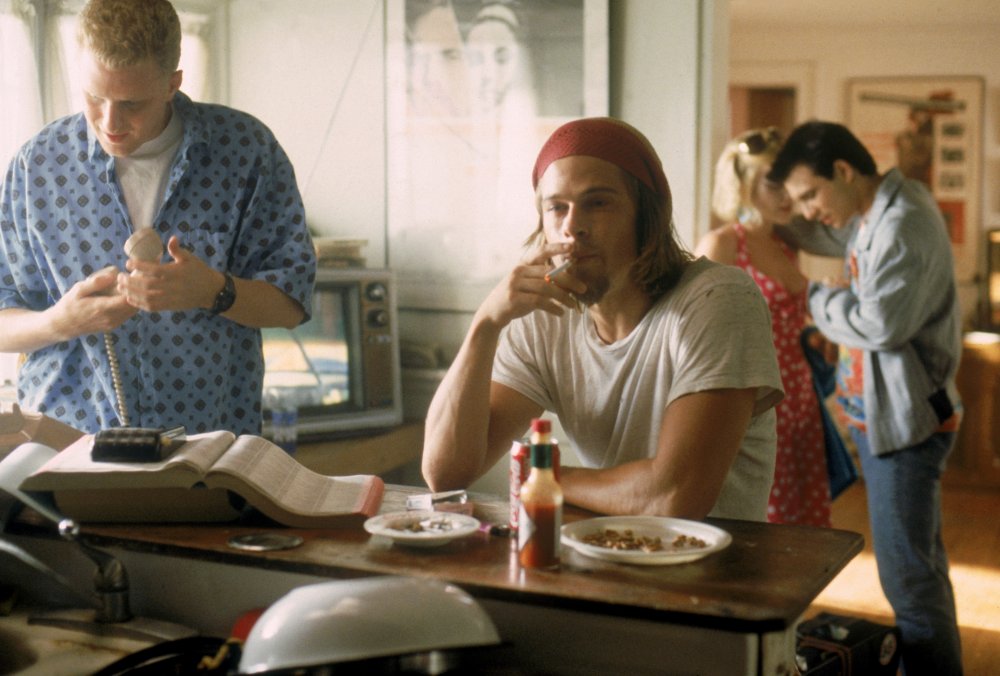 If it wasn’t enough to have the heavyweight British actor of the 1980s essay a pimp and two of the biggest New Hollywood stars of the 60s and 70s shoot the breeze, Tony Scott cast the biggest star of the 90s as a sofa-bound stoner. Brad Pitt later admitted that he spent a portion of his actual life in the early 90s getting heavily stuck into beer and weed, but one can only hope he was as funny as his True Romance alter ego. Lank-haired Floyd watches TV, tokes on a bong, drinks beer and laughs, whether he’s ignoring knocks on the door, trying to remember directions or facing mob guns. Floyd looks like a surfer but there’s no way he’d be bothered to leave the house, let alone ride waves all day. 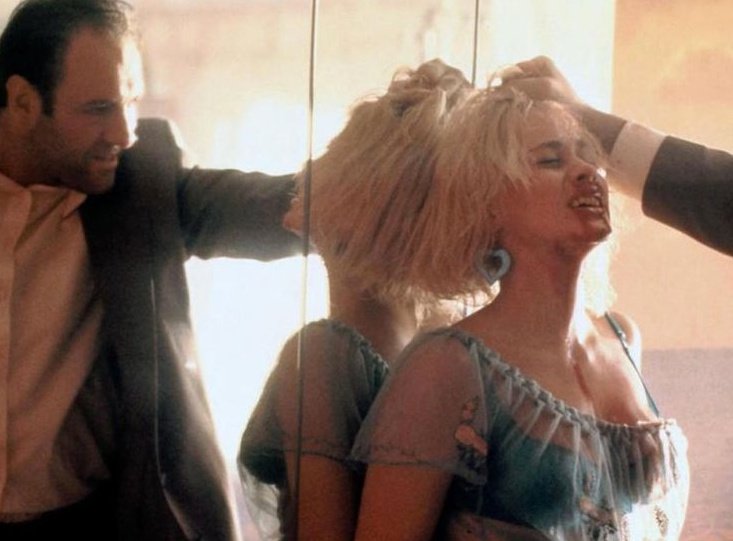 Aside from a ridiculous exchange with a befuddled Floyd in which he reveals none of his malign intent, mafia henchman Virgil (James Gandolfini) is tasked with tracking down the Worleys, retrieving the stolen cocaine and meting out the appropriate punishment. When Alabama returns to the Worleys’ bridal suite alone, Virgil is waiting and the film’s most brutal scene begins. His unpleasantness is without question and Gandolfini is frighteningly believable as a man who holds nothing back while savagely assaulting Alabama. It’s an uncompromising scene that remains tough to watch but not just for the physical violence. As ever, Gandolfini’s skill at imparting malevolence with just a grin is second to none. It would be another six years before he would become TV’s greatest mobster in The Sopranos, but he may have won the part based on this one terrifying scene. 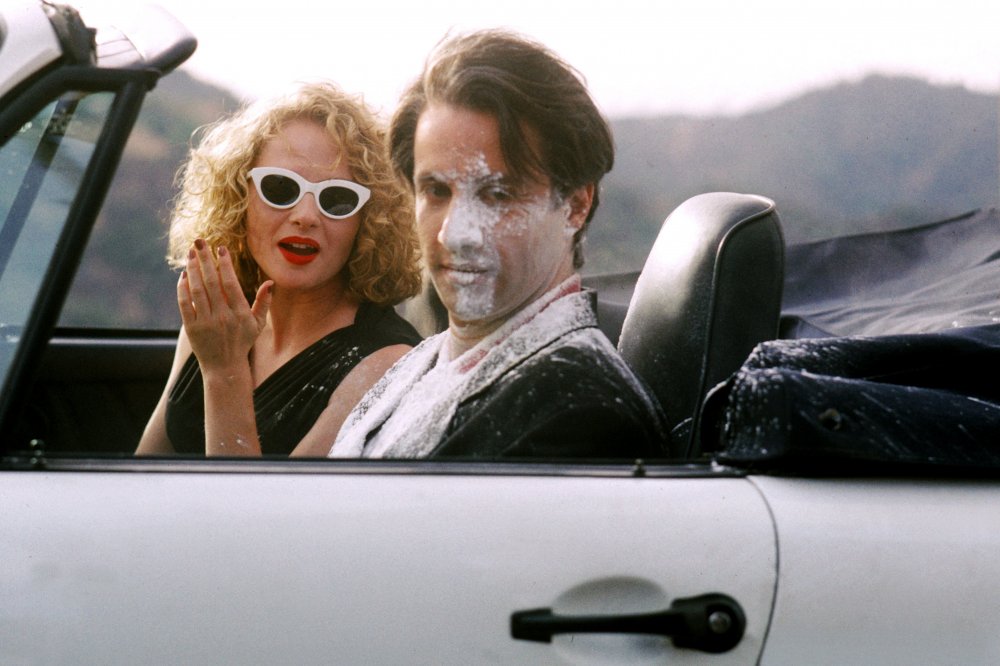 In a film populated by murderers, pimps, call girls and coke dealers, hapless but hopeful actor Elliot Blitzer is True Romance’s biggest loser. He’s routinely insulted by bolshy film producer Lee Donowitz (Saul Rubinek), manipulated by everyone else and doomed to failure. Bronson Pinchot (as hilarious here as he is as pretentious art dealer Serge in 1984’s Beverly Hills Cop), plays Elliot with all the necessary smarm one would expect from a Hollywood drug connect/bottom-feeder. He’s the butt of the joke in each scene he appears in and, following a laugh-out-loud scene where he gets pulled over for speeding, turns into a sweating paranoid mess for the remainder of the film. As with all the characters we’ve listed here, a film focused purely on Elliot’s life would be an intriguing prospect.

Related to True Romance: how Tarantino makes every character count