Tom Baker: the definitive Doctor Who?

As our Doctor Who at 50 season continues with a screening of ‘The Robots of Death’, Kevin Lyons argues that – for some Who fans – The Doctor will always be Tom Baker.

He may be approaching his 50th anniversary in the youthful shape of his 11th incarnation, Matt Smith, but for many fans The Doctor doesn’t sport a bow tie, have a penchant for a fez or enjoy an Astronaut’s Wife-style relationship with a distaff intergalactic Indiana Jones. Instead he favours large floppy hats, unfeasibly long scarves and his most faithful companion is an annoying robot dog. He’s Tom Baker, the fourth incarnation of The Doctor and the actor who enjoyed the longest run in the role and who arguably remains the best loved of any of the original series doctors.

Baker came to the role in 1974 after a spell as a trainee monk, a stint in the Royal Army Medical Corps and a patchy career in film and television which, by the time he inherited the keys to the TARDIS from Jon Pertwee, had faltered, leaving him toiling as a labourer on a building site. But armed only with an infectious grin, a wild mop of hair (his predecessor dismissed him as “all teeth and curls” in 20th anniversary adventure ‘The Five Doctors’) and a bag of jelly babies he quickly made the role his own, adventuring through space and time for an unrivalled seven years before finally making way for Peter Davison in 1981. 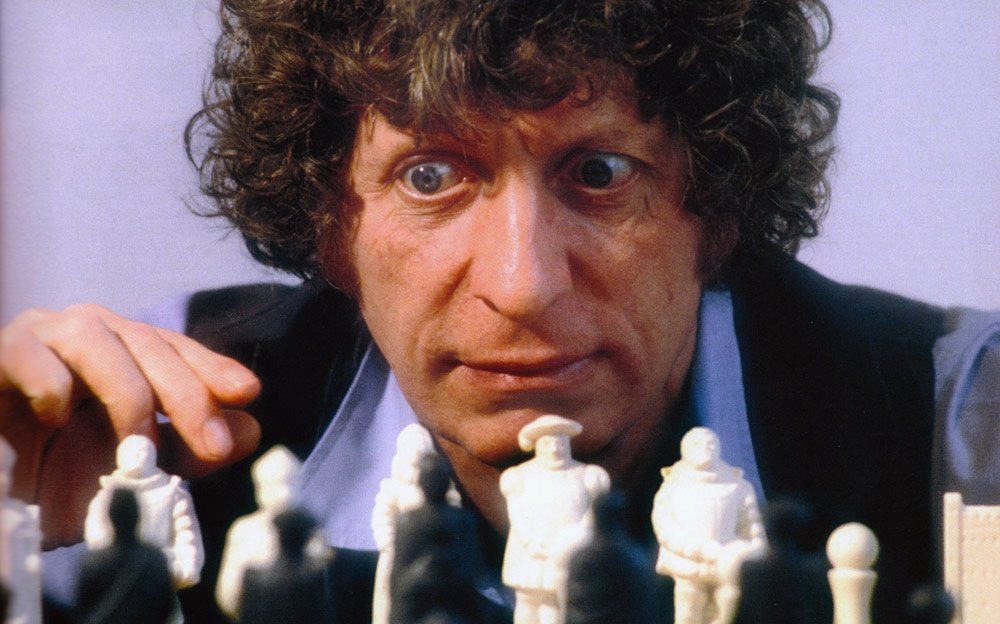 Along the way, he saw the birth of the Daleks at the withered hands of their insane creator Davros in ‘Genesis of the Daleks’; channelled Sherlock Holmes as he tangled with giant rats in the sewers, Chinese tongs in the East End and time travelling war criminals in a music hall in ‘The Talons of Weng-Chiang’; had repeated troubles with his own people, the Time Lords, in ‘The Brain of Morbius’, ‘The Deadly Assassin’ and ‘The Invasion of Time’; and for some reason seemed to have a particularly hard time with robots and computers (‘Robot’, ‘The Android Invasion’, ‘The Robots of Death’, ‘The Face of Evil’, ‘Underworld’, ‘The Androids of Tara’).

In the real world, Baker’s time on the show was no less eventful. Although viewing figures for his first few years saw the show returning to the levels of popularity it had enjoyed at the height of ‘Dalekmania’ a decade before, Doctor Who fell foul of television campaigner Mary Whitehouse who took exception to the increasingly violent tone of the stories overseen by producer Philip Hinchcliffe, particularly ‘Genesis of the Daleks’ which more explicitly than ever linked the titular aliens with Nazism, and ‘The Deadly Assassin’, one cliffhanger for which featured The Doctor apparently being drowned. 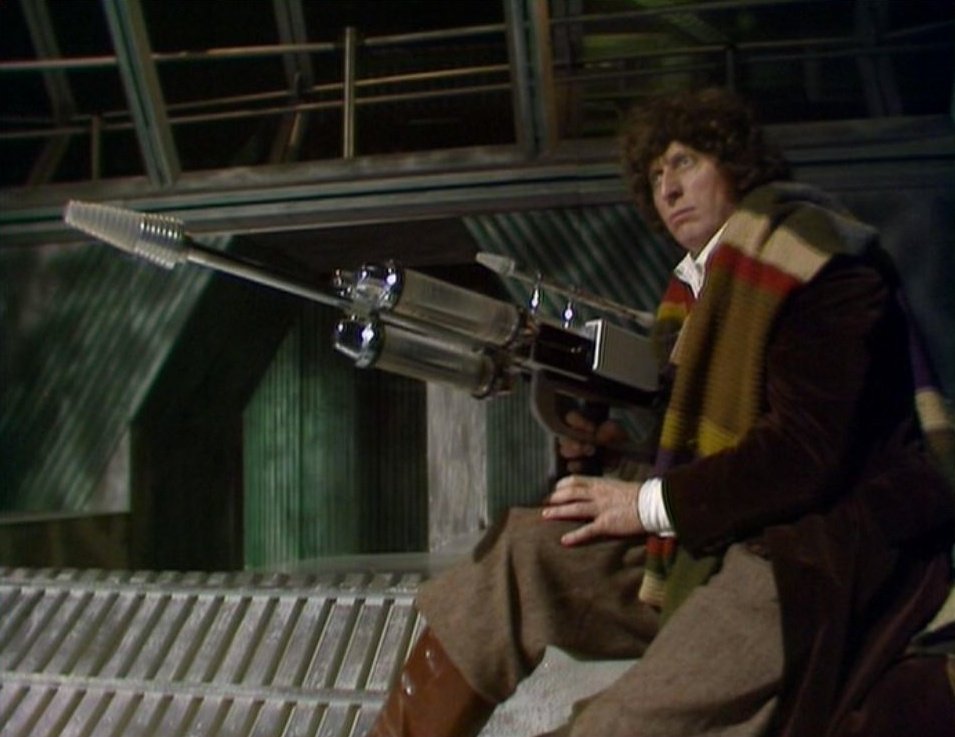 But the public loved Baker and his Fourth Doctor persona was everywhere in the 70s, selling computers and insurance in television ads, launching the series in America (Baker’s Doctor was the first to be seen there when the programme was broadcast on PBS stations) and making innumerable public appearances for his growing army of adoring fans.

Baker even turned up on the doorstep of an unsuspecting household in Preston to watch an episode of ‘The Deadly Assassin’ while passing by after appearing at a Doctor Who exhibition in Blackpool. Such was the public’s love for Baker that the family simply invited him in and allowed him to sit quietly watching the television with them.

Baker left the programme in 1981 at the climax of ‘Logopolis’ after his Doctor unceremoniously fell from a radio telescope while foiling another ill-conceived plan by his old sparring partner The Master (reintroduced in the shape of Anthony Ainley in the previous story ‘The Keeper of Traken’) and regenerated into Peter Davison. Although he subsequently appeared in documentaries celebrating the programme’s continued success, for many years he resisted the call to return to the role that made him a household name. 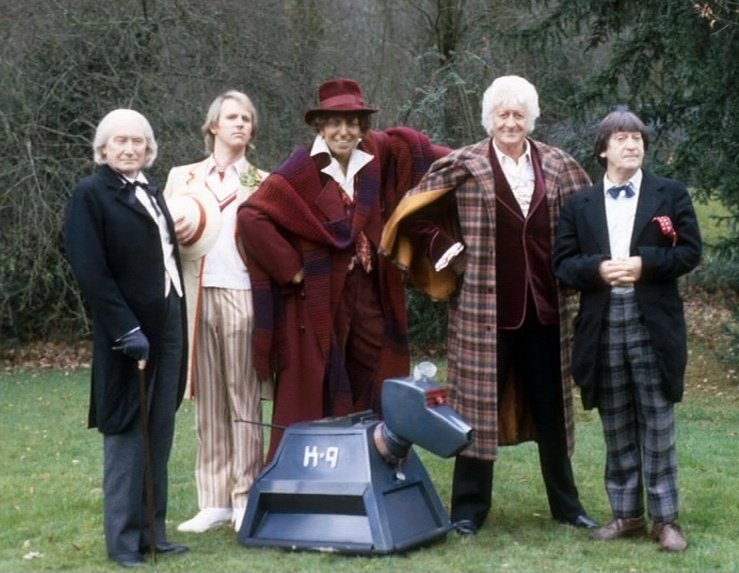 His ‘appearance’ in ‘The Five Doctors’ was confined to a rather laboured plot twist and unseen footage from Douglas Adams’ abandoned serial Shada and his appearance in the best-forgotten 1993 ‘Dimensions in Time’ special for Children in Need was limited to the Fourth Doctor sending a warning to his other selves about the peculiar plan by renegade Time Lady The Rani to trap him in a time loop.

But in July 2009 he relented and began recording audio dramas for both the BBC and Big Finish, reuniting with former companions Louise Jameson as Leela and Mary Tamm as Romana.

Two decades after he last appeared on screen as The Doctor, Baker’s popularity in the role shows little sign of waning. I daresay that for many the first mental image conjured by the words Doctor Who are still of the tall, grinning Bohemian with the wild eyes, the hat and the scarf.

Readers of Doctor Who Magazine have certainly shown little sign of their affection for the Fourth Doctor abating – since their long-running annual polls began, he has lost out on the ‘Best Doctor’ accolade only three times, in 1990 to then incumbent Sylvester McCoy and in 2006 and 2009 to David Tennant. 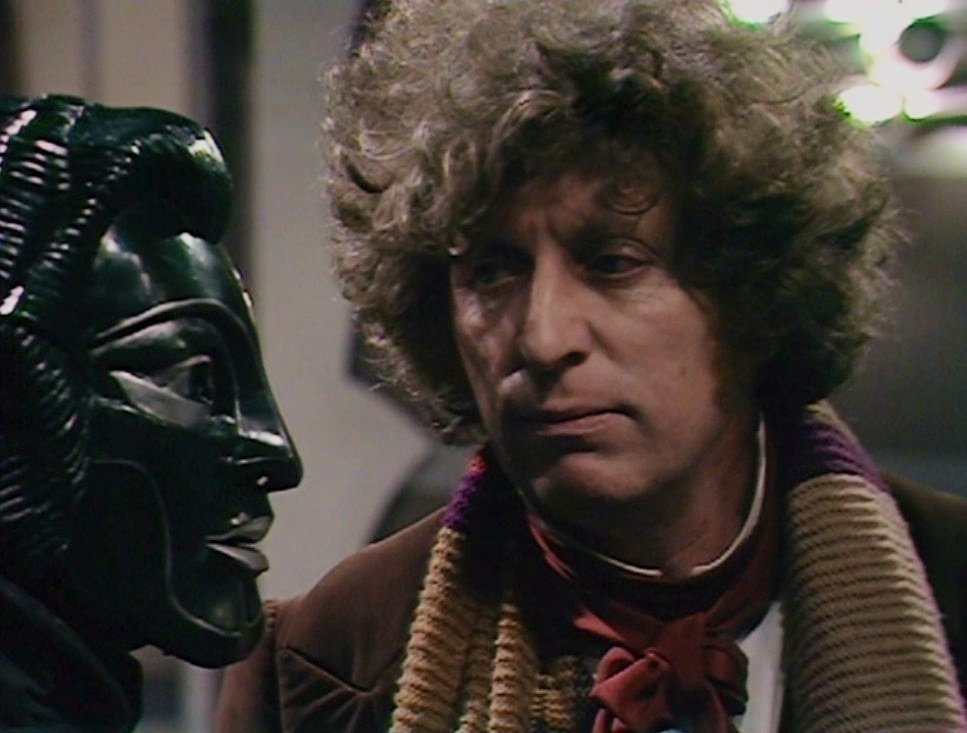 His current ‘national treasure’ status is due entirely to the seven years he spent as The Doctor, using his own natural eccentricity and wit to forge an unforgettable and truly iconic television hero who resonates with young (and not-so-young) audiences today every bit as much as he did in the 70s.

In his first few minutes in his new incarnation, The Doctor, still suffering from post-regeneration confusion, tells UNIT medical officer Harry Sullivan “You may be a doctor, but I’m the Doctor. The definite article, you might say.” And there are few who would argue with that.