As Baz Luhrmann’s Jazz Age spectacular The Great Gatsby hits cinemas, we share some discoveries from the archive of director Jack Clayton, director of the 1974 version of F. Scott Fitzgerald’s classic novel. 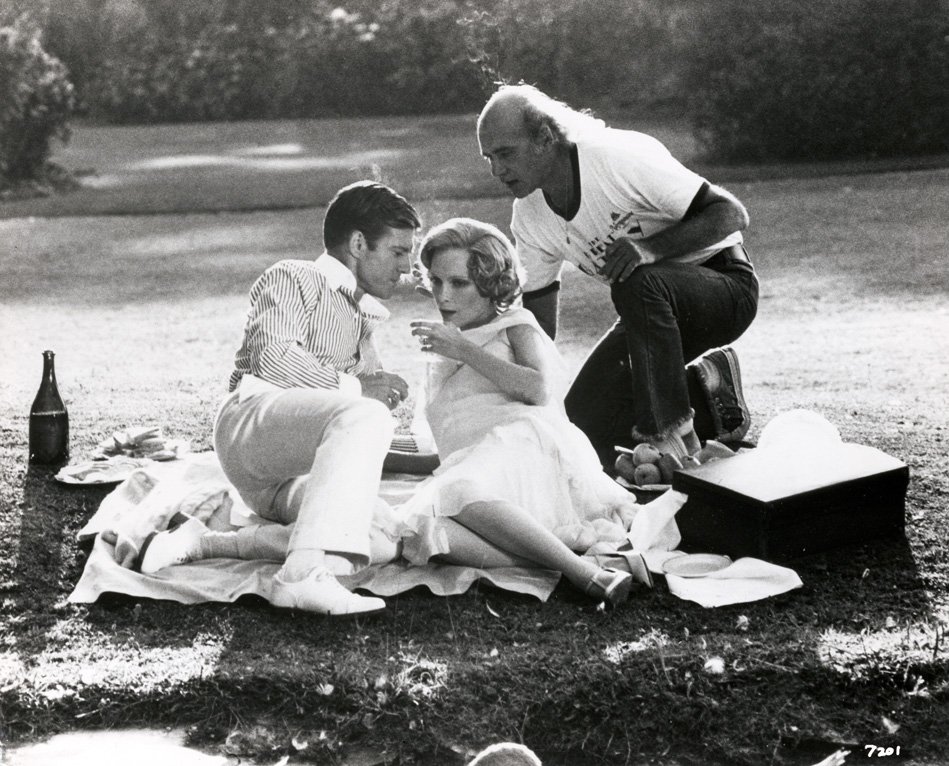 We’ve been cataloguing director Jack Clayton’s papers since last year and they will soon be made available to researchers for the first time via the BFI Reuben Library. The scripts, letters, notes and other production papers that make up the archive offer fascinating insights into Clayton’s struggle to film F. Scott Fitzgerald’s The Great Gatsby in 1974 – there had already been two previous attempts in 1926 and 1948 – and hints at why even the talents of Robert Redford, Mia Farrow and a script by Francis Ford Coppola had trouble making it third time lucky.

Jack Clayton had gained a reputation for successfully delivering complex literary works to the screen. Breaking ground with John Braine’s ‘kitchen sink’ drama Room at the Top (1958); frightening audiences with The Innocents (1961), a version of Henry James’s gothic horror The Turn of the Screw; and portraying marital meltdown and mental illness in Penelope Mortimer’s The Pumpkin Eater (1964).

There was initial scepticism that an English director should be chosen to interpret this most American of all novels. But Clayton was undeterred, and began a meticulous unpicking of the original text.

Clayton admired Fitzgerald, but felt The Great Gatsby had some flaws in its dramatic construction. He thought Truman Capote’s first draft screenplay – by faithfully adhering to the book – was overlong and needed variety of pace. It lacked detail about Daisy and Gatsby’s past relationship and crammed too much action into its final pages. “It is like a great fish that is all head and no tail”, he told Capote in his notes. Capote was replaced by Francis Ford Coppola – who had already won a screenwriting Oscar for Patton (1969) and was about to release his directorial masterpiece The Godfather (1972). 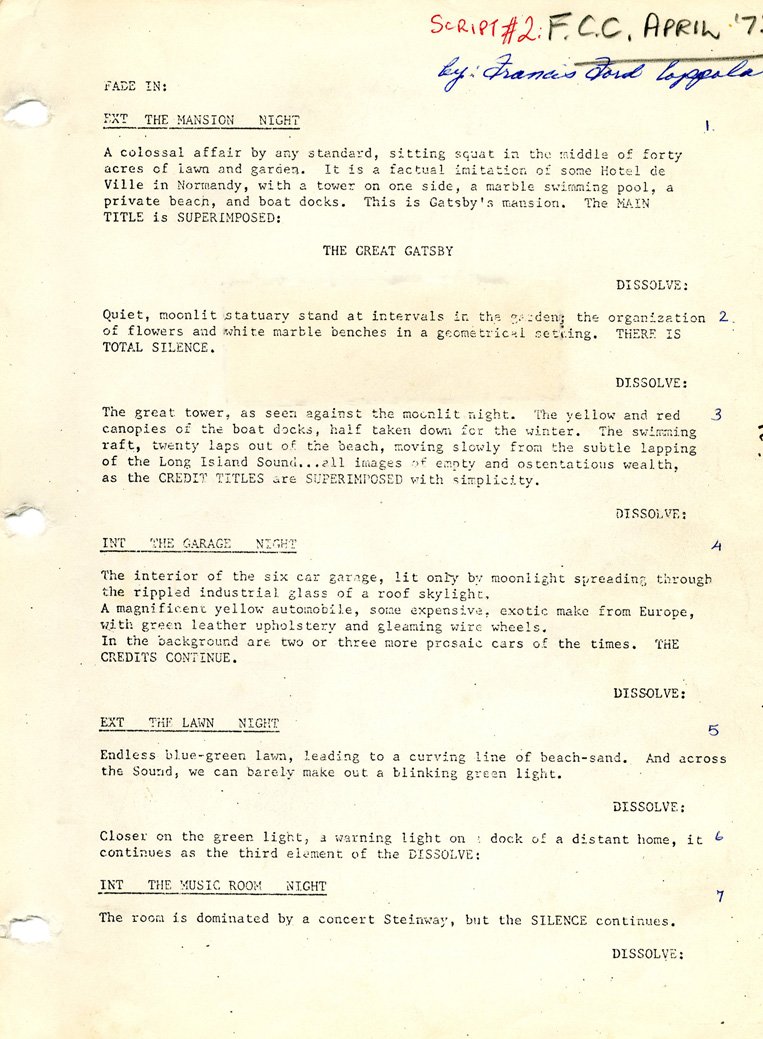 Clayton gave Coppola copious notes and suggestions, including his idea that the pool at Gatsby’s house should play a more prominent role. He wanted to introduce a love scene there between Gatsby and Daisy, memories of which would later pre-occupy Gatsby. 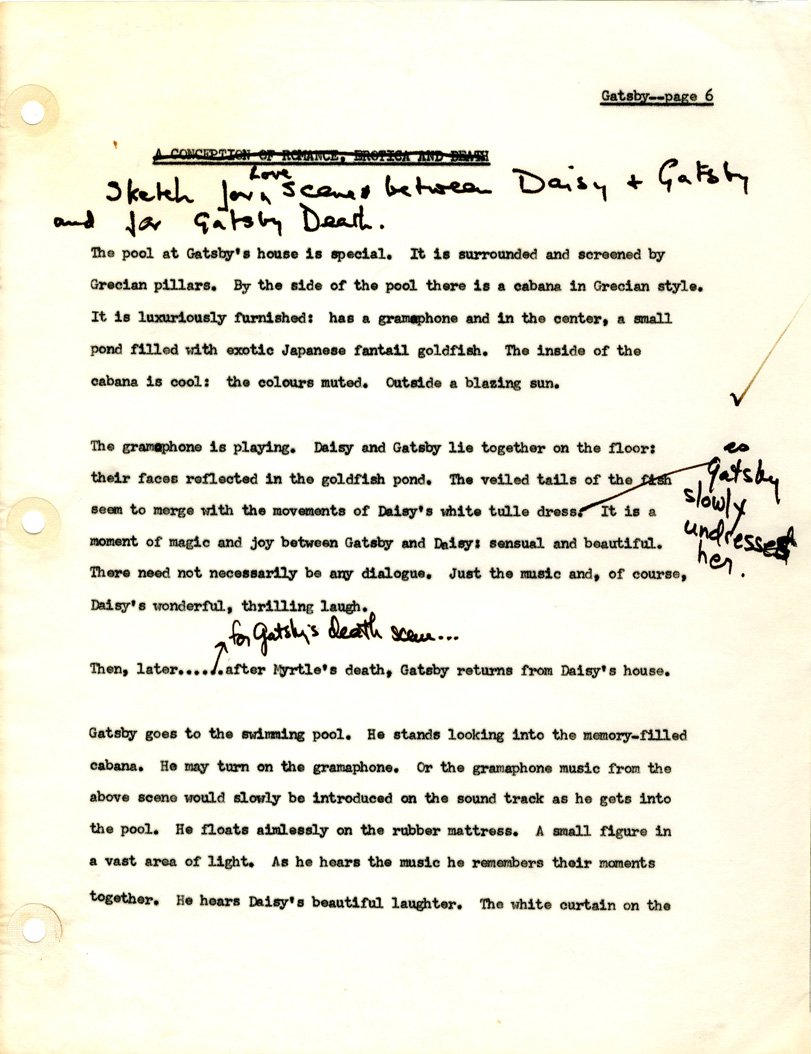 Jack Clayton's annotated typescript notes and suggestions for a love scene and the finale, undated c. 1972

Fitzgerald’s daughter, Francis ‘Scottie’ Smith, kept a close eye on the screenplay, arguing strongly that Gatsby shouldn’t be portrayed as a gangster: in a letter to Clayton she wrote of the need to “de-Godfather” the script. She also advised caution over the inclusion of sexual content, fearing it might exclude younger audiences who studied the book at school. 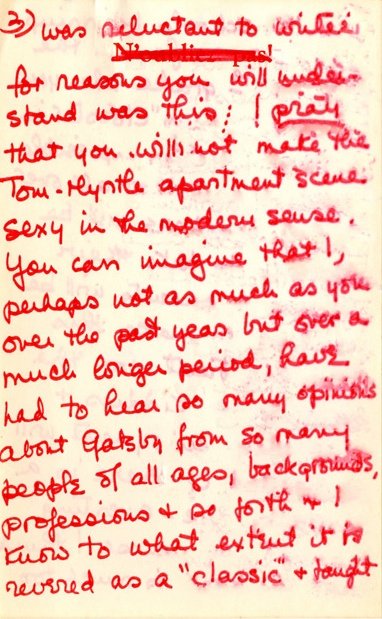 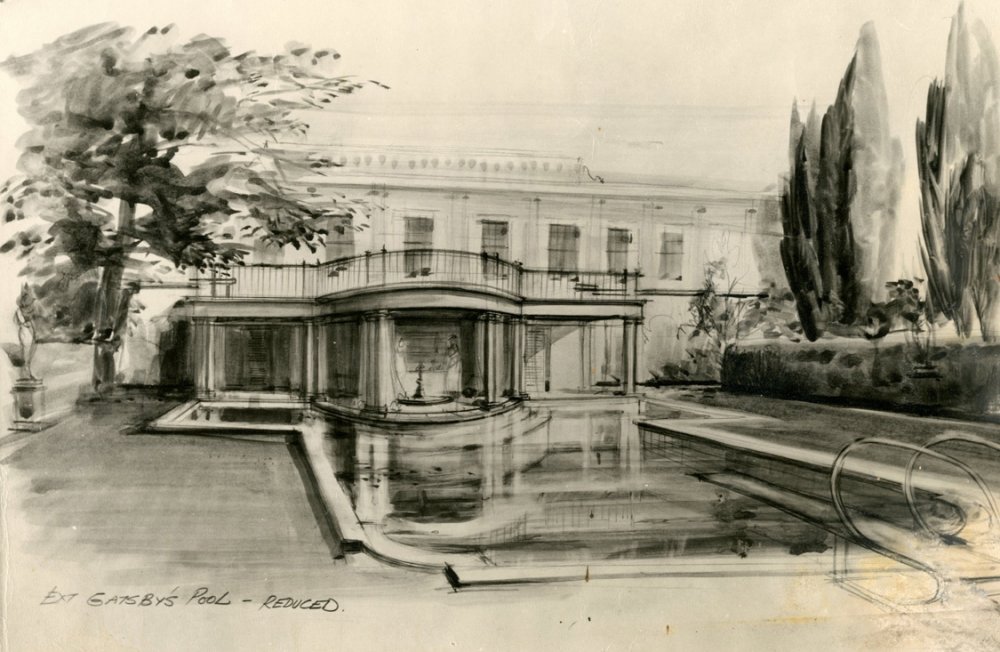 Clayton had very definite ideas about colour, favouring only pale pastels in principal costume and light gossamer fabrics, with Daisy nearly always seen in white. In a letter to John Box, he writes:

I think the film should have a golden look… I intend to keep going through the film a constant feeling of extreme heat… I want people to perspire all the time and I want even to see stains on people’s dresses. It is a part of the story, the heat.

A huge challenge then, when filming in rainy Rhode Island and on a chilly Pinewood Studio back lot. Clayton was also against slavish attention to period detail if it would be detrimental to the composition of the scene. In further notes to John Box he says emphatically, “This is a film for today and of today, which is merely set in 1925.” 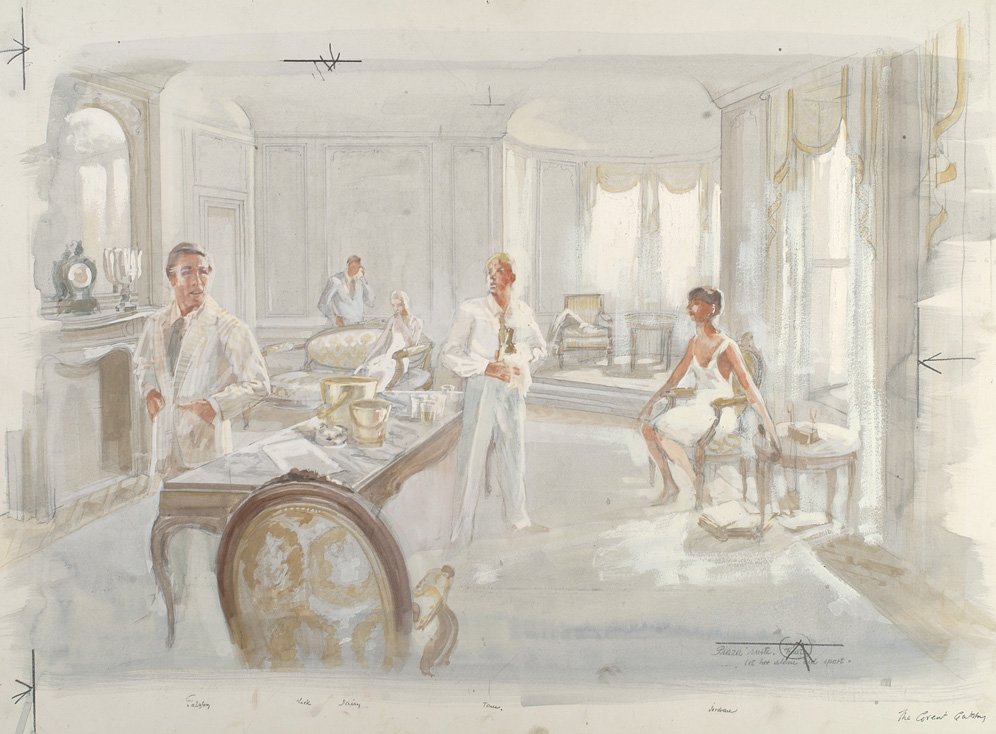 There were many casting ideas for the role of Daisy Buchanan, Fitzgerald’s archetypal ‘flapper’. Natalie Wood, Julie Christie and Faye Dunaway were all considered. 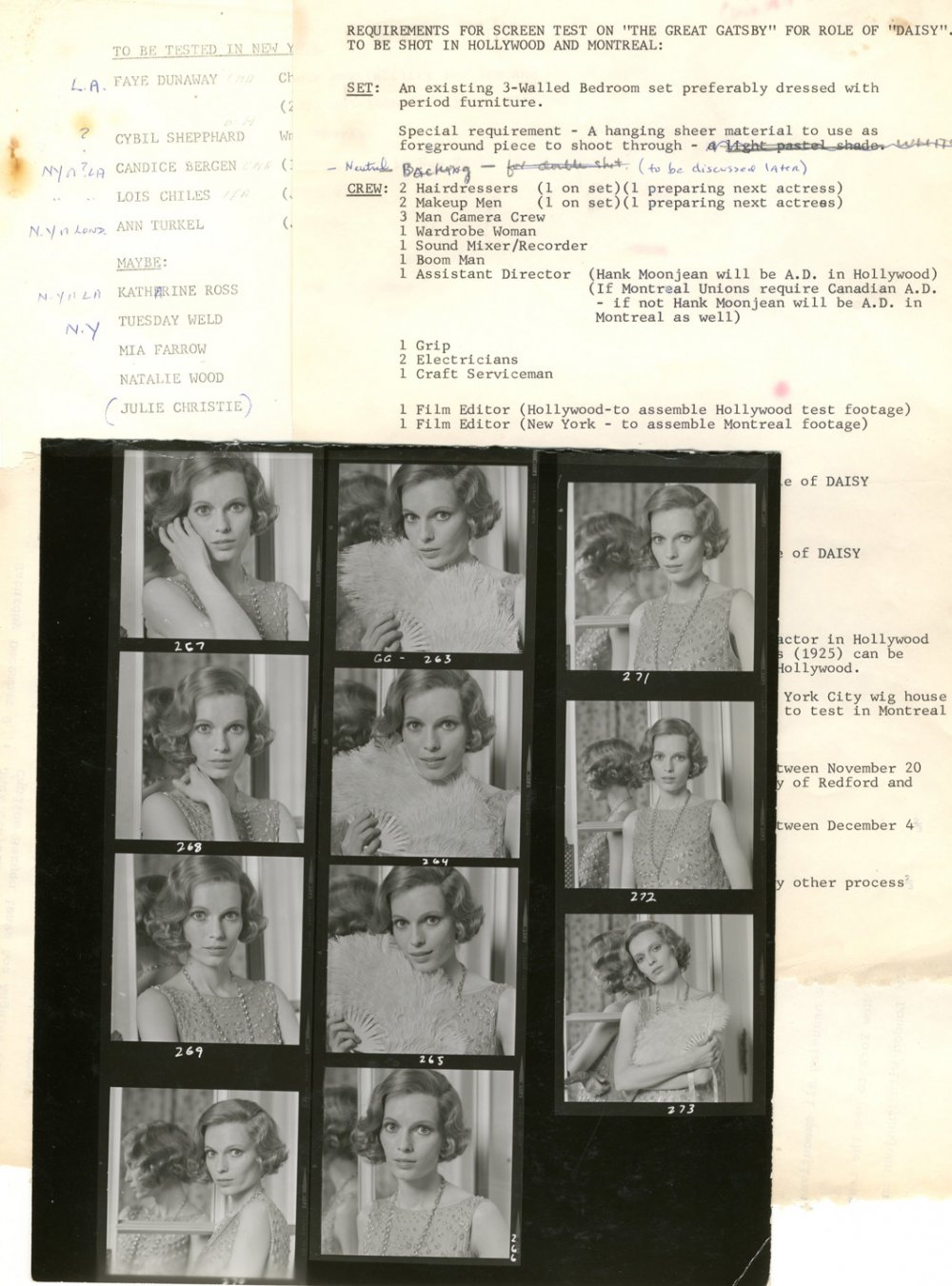 But Mia Farrow – who was only a “maybe” on the list of actresses – gave what Clayton described as a “sensational” test performance, despite being very ill with flu; he even refused to be deterred when she announced she was in the early stages of pregnancy.

The film won Oscars for costume (Theoni V. Aldredge) and music (Nelson Riddle) and did well at the box office, but critical reaction on both sides of the Atlantic was mixed. There was praise for Clayton’s direction, for his actors and for the film’s exquisite ‘look’, but it was widely felt there was just something missing.

Could it be that for Fitzgerald purists The Great Gatsby is simply an impossible novel to film? 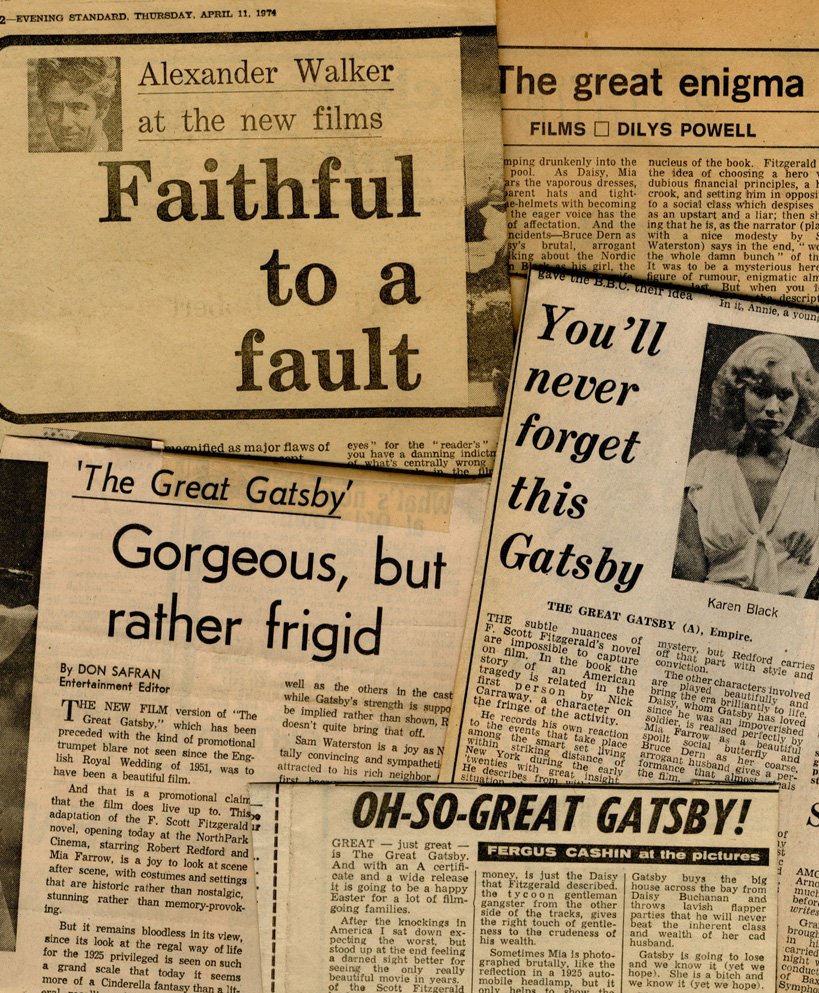 Press cuttings showing mixed reactions to the film in 1974