With True Romance back in cinemas nationwide, we get to grips with Quentin Tarantino’s sensitive side. 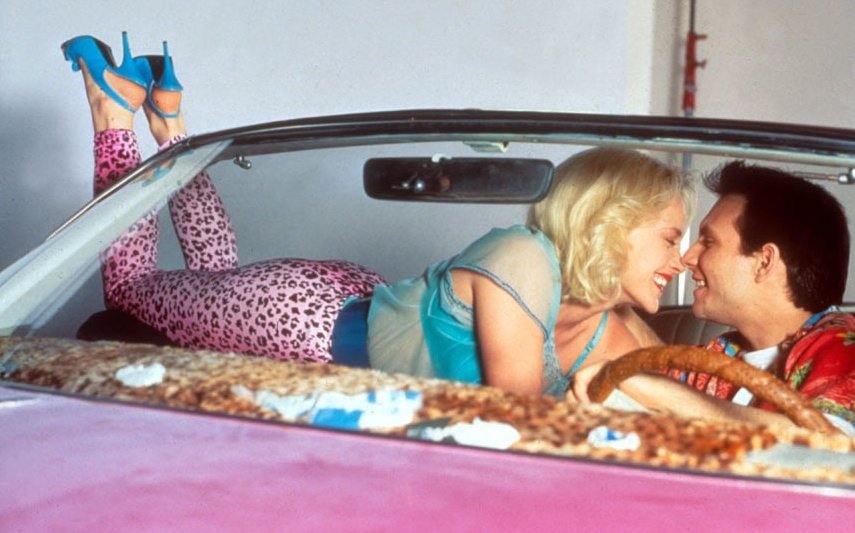 True Romance is back in cinemas nationwide from 20 November 2015.

When you think of the films of Quentin Tarantino, romance isn’t likely the first thing that springs to mind. But look beneath his trademark whip-cracking dialogue and bloody violence and you’ll find that most of Tarantino’s screenplays reveal a soft centre around which all that mayhem revolves. First exploring his sensitive side in 1993’s True Romance, which is about to be rereleased across the UK, the writer-director has since brought a plethora of colourful couplings to the screen. Here are some of his most memorable… 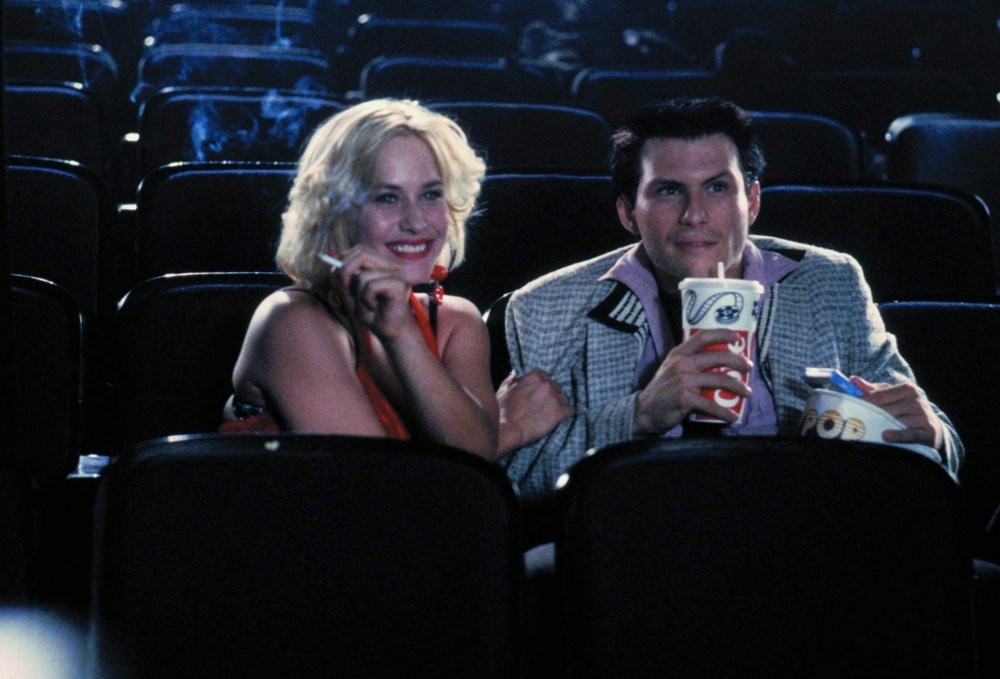 Elvis-obsessed Clarence Worley (Christian Slater) and rookie call girl Alabama Whitman (Patricia Arquette) are two of Tarantino’s earliest characters, but remain his ultimate power couple. Their endearing date night, involving spilled popcorn during a Sonny Chiba triple bill, may be a set-up – a birthday present to Clarence from his boss – but it is nevertheless love at first sight, and they marry the very next day.

This all-consuming passion fuels the carnage that follows, after Clarence kills Alabama’s pimp Drexl (Gary Oldman) to defend her honour. (“I think what you did is so… romantic” is her breathy response to his admission of murder.) As they journey from Detroit to LA to escape the clutches of Drexell’s drug cartel cohorts, Clarence and Alabama barely take their hands off each other; their chemistry overcoming the brutality they face at every turn.

Even during the climactic gun battle, with bodies falling all around her, Alabama’s feelings are overwhelming. “When all I could hear was the thunder of gunshots and all I could smell was violence in the air,” she intones after the event, “I look back and am amazed that my thoughts were so clear and true, that three words went through my mind endlessly… you’re so cool.” It’s a declaration of love as powerful and eloquent as any, and it’s entirely fitting that Clarence and Alabama are rewarded with a happy ending – complete with a child named, of course, Elvis. 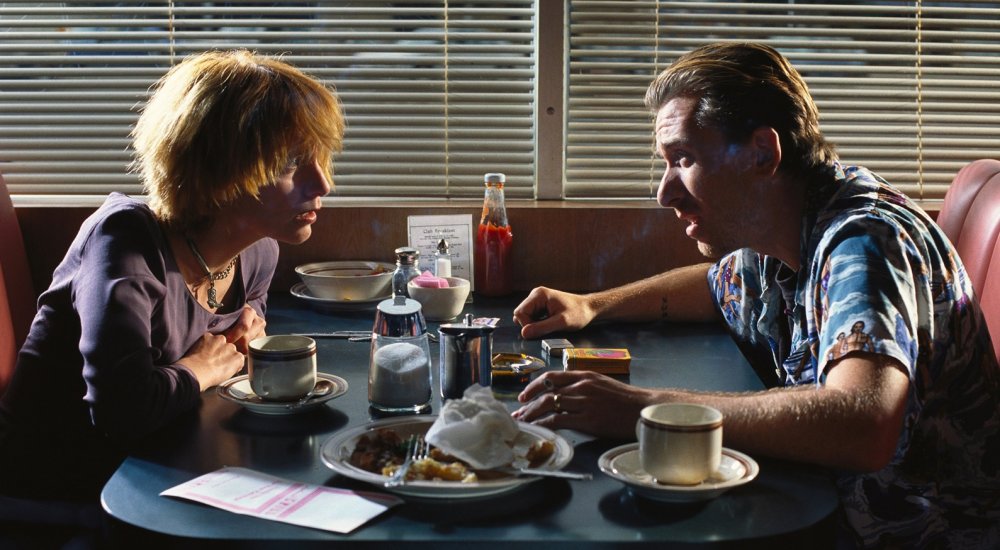 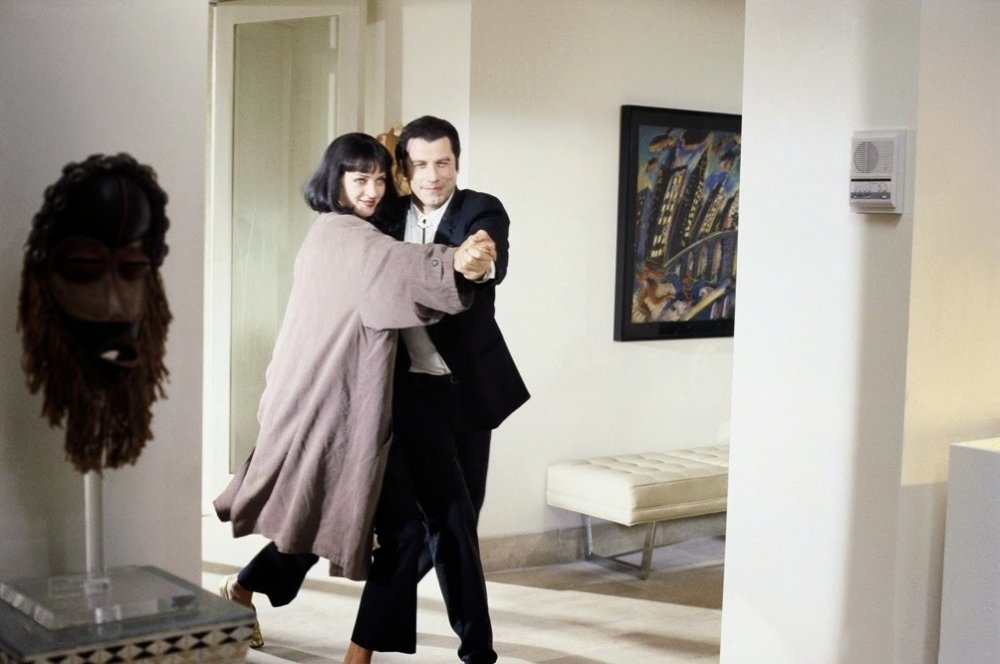 Unfolding to the increasingly suggestive strains of Dusty Springfield’s ‘Son of a Preacher Man’, Chuck Berry’s ‘You Never Can Tell’ and Urge Overkill’s ‘Girl, You’ll Be a Woman Soon’, the dangerous flirtation between hitman Vincent (John Travolta) and gangster’s wife Mia (Uma Thurman) is one of modern cinema’s greatest seductions.

The first we see of Mia is a close-up of her red lips as she talks to Vincent, a sensual motif that’s repeated as she sucks on a milkshake (then a straw, then a cherry) during their dinner date at Jack Rabbit Slim’s. By the time the pair take to the dancefloor, for the diner’s provocative twist contest, their chemistry is electric and it seems clear where the night is heading… until Mia takes a massive heroin overdose, forcing Vincent to turn knight in shining armour and save her life. In Tarantino’s world, nothing says “I care” like a massive hypodermic needle to the chest. 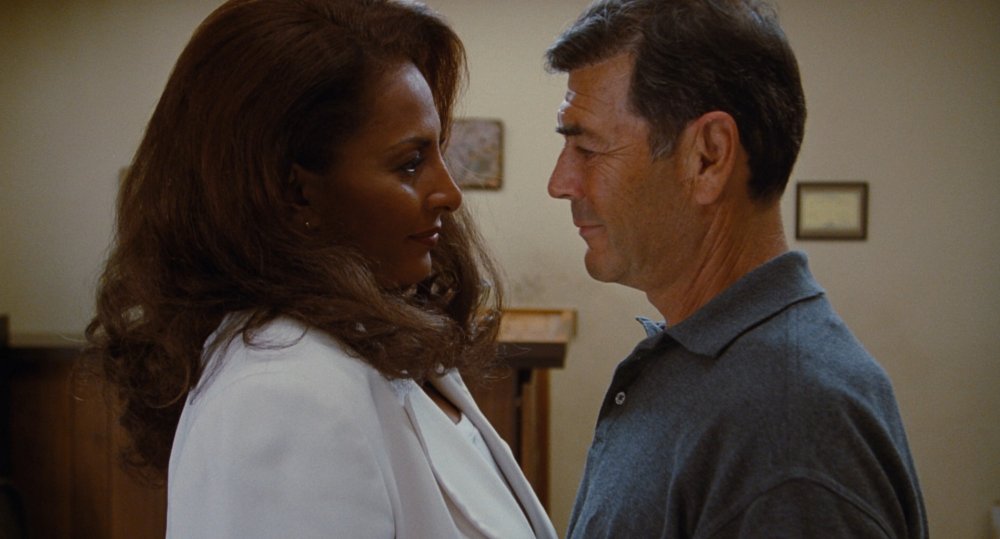 There’s no love lost between Pam Grier’s sassy flight attendant-slash-gun-smuggler Jackie Brown and her arms dealer boss Ordell (Samuel L. Jackson) – particularly after she walks off with his $500,000 – but genuine feelings do run deep in this cerebral heist thriller. While the growing attraction between Jackie and bail bondsman Max Cherry (Robert Forster) is never given voice, their chemistry is crucial both as pivotal plot point and sensitively handled counterbalance to the narrative’s aggressive power plays. 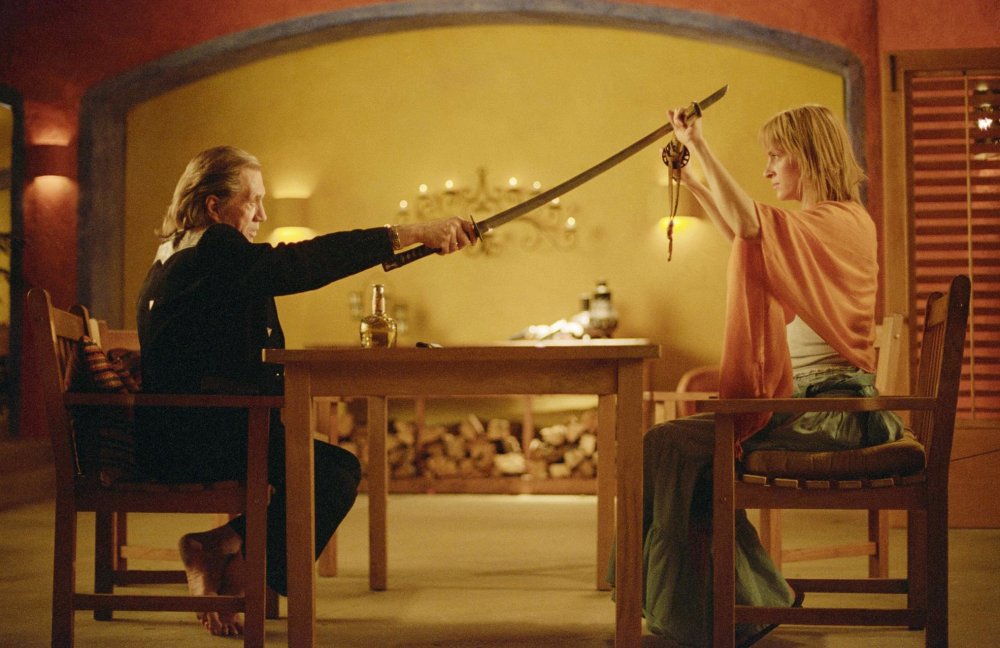 Although their romance ended in attempted murder, the connection between former assassin Beatrix Kiddo aka The Bride (Uma Thurman) and her hitman ex Bill (David Carradine) is strong enough to drive two features’ worth of passionate revenge.

After witnessing Kiddo’s relentless rampage through Bill’s entourage, her eventual confrontation with the man himself is surprisingly tender. Despite her violent intent, the strength of their shared history – heightened by the presence of their young daughter – gives their climactic denouement an emotional undercurrent and the kill, when it comes, is intimate. Using the legendary five-point-palm technique, Kiddo seals Bill’s fate by gently exploding his heart; a fitting end to this ultimate love/hate relationship. 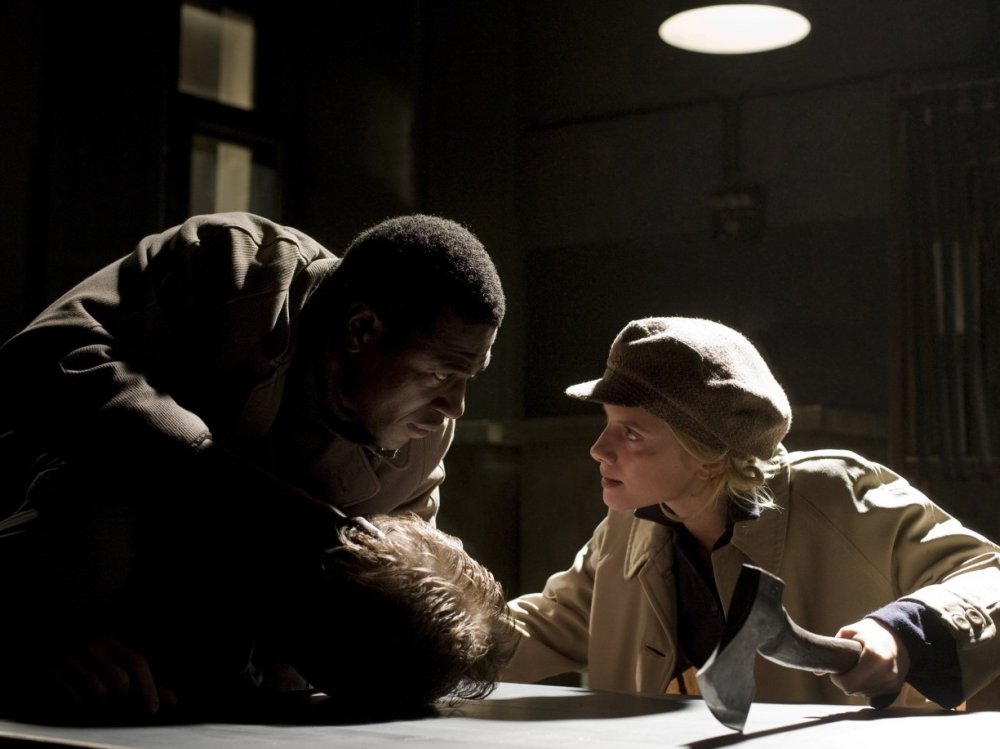 While Tarantino’s Oscar-nominated alternative World War II screenplay Inglourious Basterds may revolve around the moustachioed machismo of a band of Nazi-hunters, the film’s explosive climax is firmly in the hands of cinema owner Shosanna (Mélanie Laurent) and her projectionist lover Marcel (Jacky Ido).

While the plan to bring down the Nazi elite by burning them to death inside a locked cinema is entirely Shosanna’s, who wishes to avenge her murdered family, it is Marcel who carries out the act. As he sets light to film reels behind a screen broadcasting his lover’s triumphant face, he is essentially sacrificing himself for her cause; a romantic declaration made even more powerful as Shosanna lies dead in the projection booth above, killed by Nazi cineaste Frederick Zoller (Daniel Stahl). It may kick-start a sequence of bombastic violence, but it’s Tarantino at his most poetic. 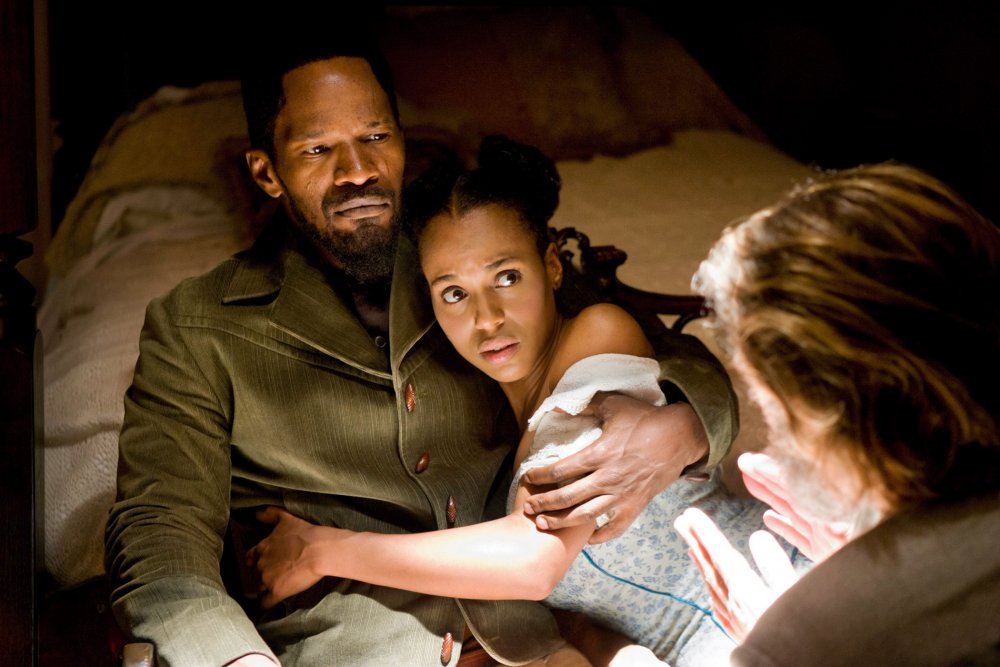 The most recent of Tarantino’s screenplays has much in common with True Romance as, like that film’s Clarence, titular protagonist Django (Jamie Foxx) is motivated not by revenge but by undying love for his wife, Broomhilda (Kerry Washington).

A former slave, Django risks his newfound freedom to team up with his emancipator, bounty hunter Dr King Schultz (Christoph Waltz), and release his wife from the enslavement of plantation owner Calvin Candie (Leonardo DiCaprio). While most of the film is given to the growing friendship between Django and Schultz, Broomhilda is Django’s ever-present motivation and the strength of his feelings inspires Schultz to pay Candie’s outlandish $12,000 ransom for her release (until, unsurprisingly, violent events force a different outcome.) Indeed, as a powerful personification of the all-conquering strength of true love, Django – like Clarence before him – is one of Tarantino’s purest romantic heroes.