The first ever winner of the Oscar for best foreign film, 60 years ago, Federico Fellini’s La strada put his wife Giulietta Masina centre stage in an affecting road movie that became a landmark in world cinema. 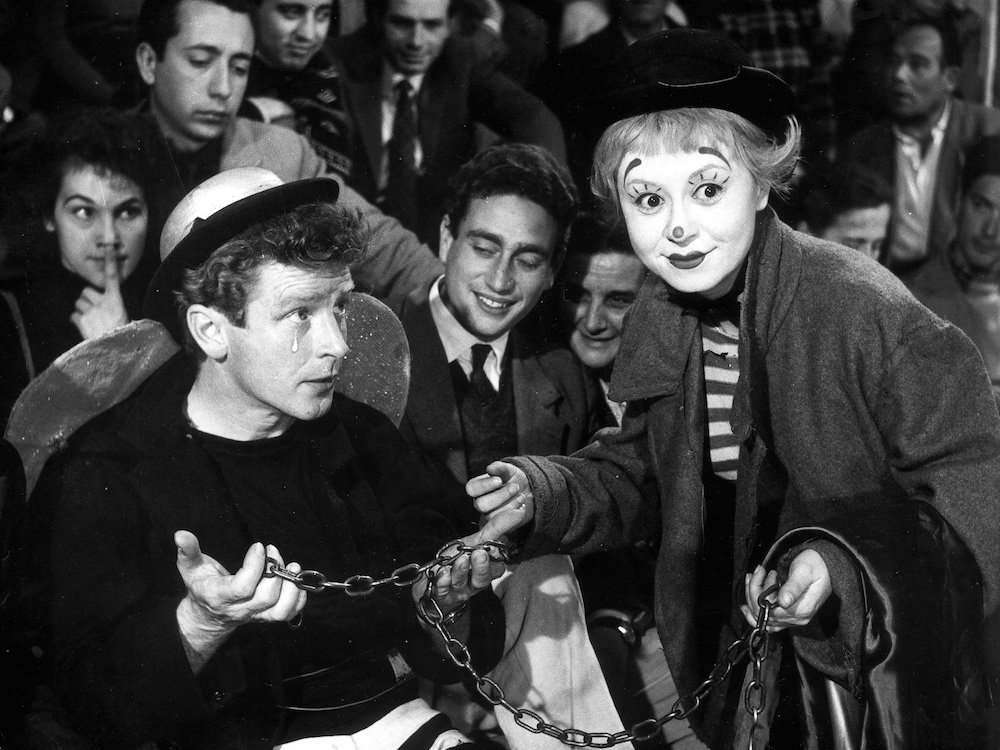 La strada is back in cinemas nationwide from 19 May 2017

Taking to the stage at the Oscars ceremony at Hollywood’s RKO Pantages Theatre on 29 March 1957, president of the Academy George Seaton introduced the inaugural award for best foreign film. Among the nominees were Kon Ichikawa’s The Burmese Harp (1956) and René Clément’s Gervaise (1956), but the winner turned out to be the fourth full feature by a cartoonist-turned-filmmaker whose burgeoning career was about to truly take off.

Federico Fellini’s La strada (1954) tells the story of a young woman from an impoverished family who is sold to a strongman in a traveling circus. Not only did the film launch Fellini’s career internationally, it also provided a once-in-a-lifetime central role for his wife of 11 years, Giulietta Masina, who played the heartbreakingly guileless protagonist Gelsomina.

In the decade before her breakthrough, Masina had taken on a variety of supporting roles and had featured in two of her husband’s early films, Variety Lights (co-directed with Alberto Lattuada, 1951) and The White Sheik (1952), winning two prestigious Silver Ribbon awards for best supporting actress along the way.

The first germ of an idea that Fellini had for La strada was that of two characters who had been thrown together without really knowing why. This idea then merged with his search for a project that would put his wife centre-stage, a piece that would best showcase Masina’s physicality and performance style. In his 1980 memoir, Fare un film (Making a Film), the director notes: “To me, Giulietta seems the kind of actress that’s uniquely equipped to express with immediacy the sense of wonder, the confusion, the frenetic happiness and the comic sadness of a clown.” He went on to explain how he viewed the clownish aspects of an actor as their most precious quality – “the sign of an aristocratic vocation for the scenic arts”.

Given his background as a cartoonist, Fellini always conceived of his characters with sketches, and for Gelsomina he drew a small figure sporting a long military cape and tennis shoes, her short blonde locks sprouting out from under a bowler hat. It’s such a singular, unconventional image, and so clearly conceived with Masina in mind, that the film’s co-producer Dino De Laurentiis’s original suggestion (according to Fellini) of Silvana Mangano seemed more than a little odd. Just as it would have been odd to have had Masina play Mangano’s role in, say, Bitter Rice (Giuseppe De Santis, 1949). 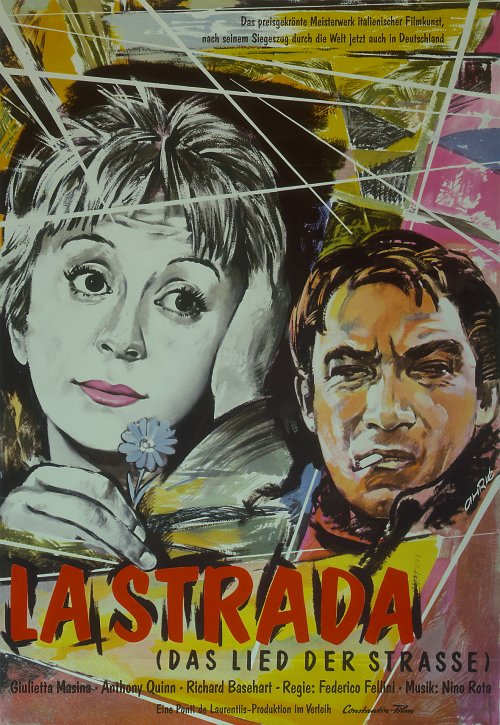 De Laurentiis’ initial choice of Burt Lancaster as Zampanò was nearer the mark, but despite his similarly imposing stature, Lancaster lacked the furrowed-brow gruffness that Anthony Quinn seemed to exude so effortlessly. Quite apart from any more specific aspect of the actors’ performances, there had to be a significant difference in physical stature between the two characters – Zampanò had to loom over Gelsomina. Both Fellini and Masina felt that there had to be a downtrodden quality to the protagonist, a sense that she lacked the nous to thrive in the world she had been thrown into.

After the film’s release, Masina was overwhelmed by the reaction to her performance. When she came to the UK to show the film, she returned to her hotel one evening to find packages of clothes sent by worried cinemagoers. Some even thought that Fellini had met Masina at the circus and married her out of pity. Clearly, the character had made an extraordinary impact, but Masina never lost her humility. Indeed, when she went to the Oscar ceremonies for La strada and The Nights of Cabiria, her chief concern was adding to her autograph collection.

Fellini made a further four films with Masina, the last – Ginger and Fred – in 1986. After a supporting role in Il bidone (1955), she had top billing again in 1957’s The Nights of Cabiria where she played the eponymous Roman prostitute, a character with whom she felt she could more closely identify. Cabiria shared some of Gelsomina’s traits, but she had an added steeliness. “[Her] basic instinct is to search for happiness as best she can, as one who has not been dealt a good hand,” Fellini told Charlotte Chandler. “She wants to change, but she has been typecast in life as a loser. Yet she is a loser who always goes on to look again for some happiness.”