From Star Wars to George Orwell: why storyboarding matters

The art of the storyboard plays a key part in film production. But, when the film is finished, do storyboards have anything left to tell us? 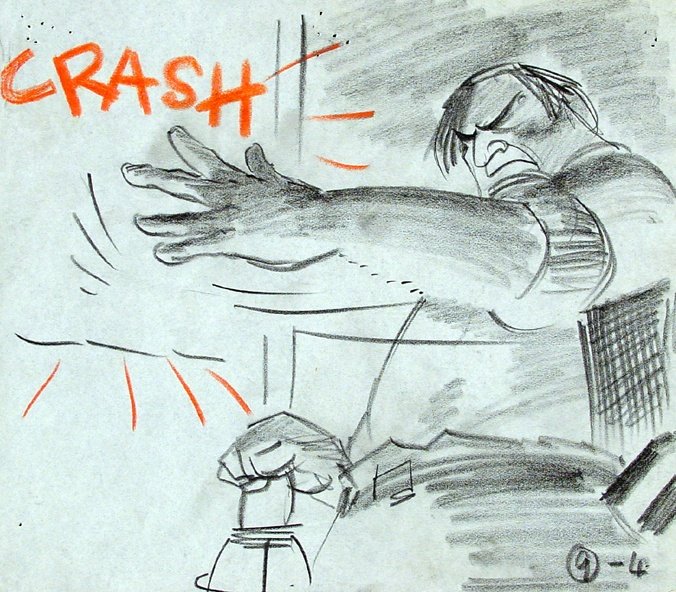 Why should we care about storyboards when we have the finished film?

The same question could be asked about the screenplay, and there have been many screenwriters, none more vocal than the legendary Jean-Claude Carrière, who have posed this very question. A recipient of a lifetime achievement Academy Award in 2014, Carrière rarely passes up an opportunity when speaking publicly about his career as both a screenwriter and director to restate this now familiar refrain: “Everyone knows that when shooting is over, screenplays generally end up in studio wastebaskets.”

While the study and appreciation of screenplays has blossomed despite their disposable nature, perhaps by virtue of their written form mirroring that of the theatrical play, thereby granting a degree of artistic autonomy and legitimacy outside of the finished film, the storyboard has struggled to gain a similar footing. For those interested in the storyboard, there are opportunities to engage with the form, but these are mostly limited to ‘Art of’ books and occasional gallery exhibitions of notable storyboards. But should we care? 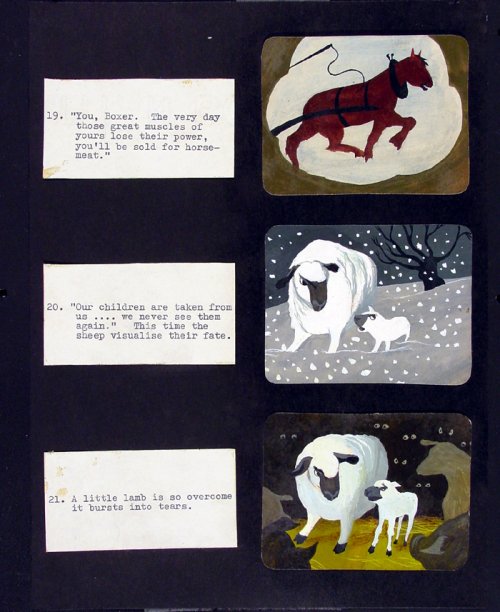 There are several answers to this. As an industrial process, storyboarding relies on both individual and collaborative effort, and therefore neatly reflects the tension that underpins all filmmaking. As a document, the storyboard can provide a window on the creative journey taken during the production process – a journey that fades from view, and perhaps also memory, once the film is in the multiplex.

But perhaps most importantly of all, our burning fascination with directors, writers, and performers has meant that many of the storyboard artists who hold similar authorial claims over the look and feel of a finished film remain invisible. This is why I care about the art and practice of storyboarding.

In the book Storyboarding: A Critical History (Palgrave, 2015), which I co-authored with Steven Price, our aim was to fill in the many gaps left by the ‘How to’ manuals – which constitute the bulk of extant literature concerning the storyboard form – and to establish the first critical history of the form.

During the course of researching this book we discovered many things about the evolution of the storyboard form that have understandably remained beyond the remit of the existing ‘How to’ literature. While it is impossible to retread this in full here, I would like to share a couple of examples that help illustrate the challenges and surprises bound up in storyboard research. 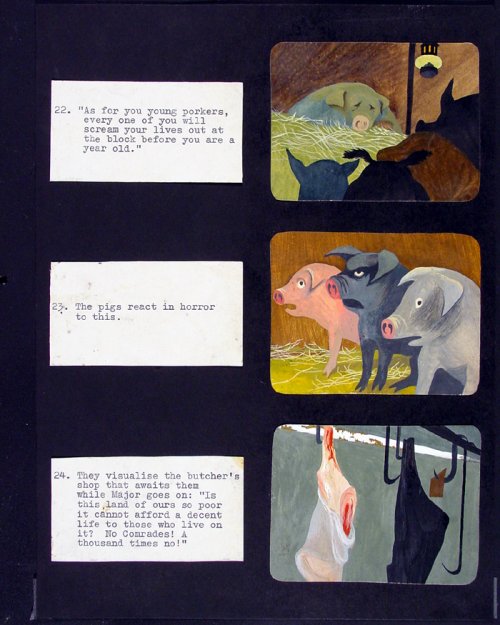 The BFI’s archive has proven to be a good resource for storyboard research, as long as the researcher remains alert. For example, a key characteristic of storyboards that serve narrative animation is their amplified seriality, when compared to live action storyboards, due to the need to more carefully plan – and deliver – the series of developing images required for the illusion of life.

Yet, simultaneously, the pre-production world of an animated film is also filled with many more drawn documents than that of the live-action film, with character model sheets, colour mood boards, layout designs etc likely to populate the archive alongside the storyboard pages.

Without vigilant archival practice at the point of cataloguing, it can be quite tricky to work out what once was a storyboard drawing and what wasn’t – especially if there is the suspicion that the images might have been remounted to help with their preservation. 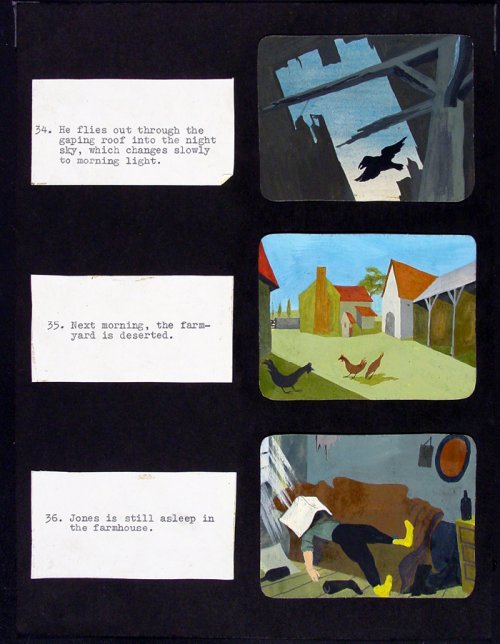 These were the challenges faced when reviewing the BFI’s Halas and Batchelor holdings, in particular some colour images related to Animal Farm (1954), the first British animated feature film. Following a ‘storyboard’ keyword search, a range of materials were returned, including several easily recognisable storyboard panels, such as the one pictured at the top of this article, to the more curious documents pictured to the side of this article. Here, short sequences of colour drawings, mounted in a narrative sequence on sheets of black card look like storyboards, yet their abbreviated seriality – offering only key frames accompanied by short lines of description from the script – suggests that these fall somewhere between a working storyboard and a fragmentary sample from a now lost colour mood board.

In this instance, the material pliability of the storyboard, which is a considerable strength during production, allowing individual frames and whole sequences to be cut, glued, re-cut, moved, to help plan a scene, becomes a challenge for both the archivist and the researcher.

Also to be found in the BFI’s archive are the storyboards produced by Ivor Beddoes for The Empire Strikes Back (1980). Unlike the Animal Farm materials discussed above, there is no uncertainty regarding the purpose or form of Beddoes’ work: it is a storyboard. This is not to say that Beddoes’ storyboard is not noteworthy, far from it. Visually, the pages are filled with artistic flourishes that conjure the sensation of movement and space, such as whip pans, expansive tracks and zooms, and wide panoramas that literally stretch the storyboard frame across the entire page. Perhaps a by-product of Beddoes’ experience in theatrical production design, his Empire Strikes Back storyboards seek to inject depth at every possible opportunity.

These storyboards now form part of the Ivor Beddoes Collection at the BFI National Archive. The fact that they form part of an artist’s archive, rather than a studio archive, serves as a potent reminder of how storyboards, and other visual pre-production materials, could become decoupled from the film and the producing studio’s archive in the pre-digital era. In the case of Beddoes’s Empire Strikes Back work, being based almost exclusively at the Elstree Studios meant that the storyboards were not archived with the rest of the production papers at Lucasfilm.

Hopefully these brief insights into the variety, vagaries and vitality of storyboard research have whetted your appetite for more! At the very least, next time you find yourself in a multiplex, I hope that you might pause for a moment to consider what role the storyboard and the storyboard artist might have played in the creation of the images that you now see on screen.

From Spielberg to Lucas to Disney and Hitchcock, every great director utilises storyboarding when planning and visualizing their film. Dr Chris Pallant of Canterbury Christ Church University and co-author of Storyboarding: A Critical History gives an illustrated talk on this often invisible part of the film making process including examples from BFI Special Collections.