How Star Wars conquered cinema with help from The Hidden Fortress

Akira Kurosawa’s classic was a key influence on George Lucas’s evergreen sci-fi. On May the 4th, and ahead of our Japan 2020 season, we explore the parallels between them. 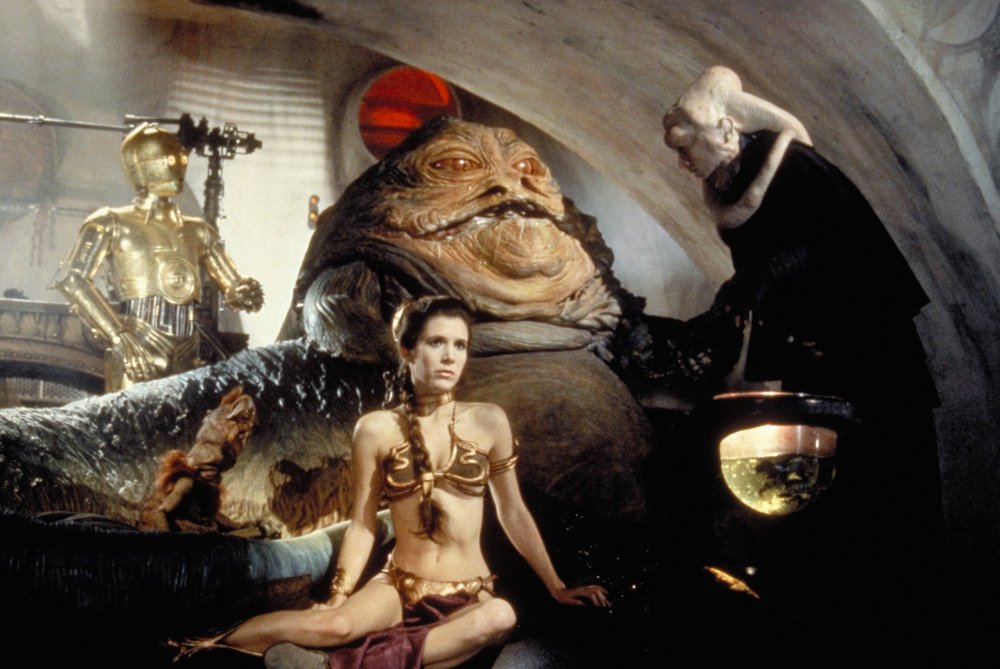 BFI Japan 2020: Over 100 Years of Japanese Cinema is a major celebration of Japanese cinema launching on BFI Player on 11 May 2020

It’s hard to think of a single motion picture that has had more of an impact on my generation than Star Wars. While other blockbusters of the late 70s faded into obscurity (Smokey and the Bandit, anyone?) Star Wars never seemed to go away. As J.J. Abrams takes the reins of the space-opera saga, will he return to the spirit and influences of George Lucas’s original trilogy?

That trilogy was the first to create an all-encompassing ‘expanded universe’ – through a smorgasbord of films, TV shows, comics, novels, merchandise and video games. Everybody and their dog has heard of Darth Vader, Princess Leia, Threepio and Artoo. But fewer in the west are familiar with General Rokurōta, Princess Yuki, Matashichi and Tahei – and yet, without them and the 1958 Japanese movie in which they appeared, there would be no Star Wars as we know it.

For the most part, Star Wars wears its Japanese influences on its large impractical sleeves – Darth Vader’s helmet is directly modelled on that of a samurai’s kabuto, the use of swords – albeit laser swords – is more Wild Eastern than Wild Western. A Jedi’s power coming from his or her mastery of a ‘living force’ is closer to Zen Buddhism than any Western philosophy. The word ‘Jedi’ itself comes from the Japanese word ‘jidaigeki’, a genre of historical dramas, which includes Akira Kurosawa’s The Hidden Fortress (1958).

Akira Kurosawa’s influence on Hollywood is difficult to overstate. Seven Samurai (1954) was remade as The Magnificent Seven (1960). Yojimbo (1961) was ripped off as A Fistful of Dollars (1964). Kurosawa’s multiple-POV technique from Rashomon (1950) would be reprised years later in great films such as The Usual Suspects (1995) and bad ones such as Vantage Point (2008). Ikiru is often quoted as being one of Steven Spielberg’s favourite films. Kurosawa’s shadow reaches far over Tinseltown, and while other movies owe a debt of gratitude to the Japanese master, Star Wars owes him its very existence – which brings us back to The Hidden Fortress. 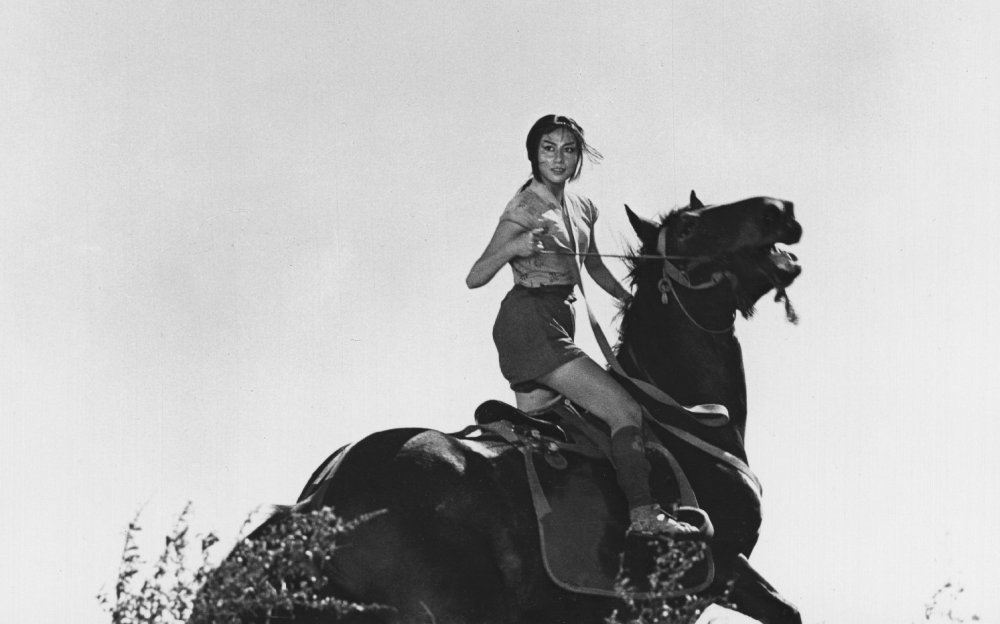 Star Wars begins with one blisteringly stark message, written in the stars: the odds are overwhelming. You see it in the very first shot, as a tiny blockade runner whizzes overhead, followed by the vast wedge of a Star Destroyer that goes on… and on… and on. The bad guys have already won.

The Hidden Fortress kicks off with similar odds. The kingdom of Akizuki has been decimated, the king is dead and all that remains of the old guard is a feisty young princess and the samurai general sworn to protect her. The future of everything becomes entangled in the destiny of two bickering peasants, Tahei and Matashichi, who are trapped in the middle of a war they don’t really understand. Those two bickering peasants would become R2-D2 and C-3PO in the Star Wars galaxy, and, as in The Hidden Fortress, we watch events unfold from their perspective.

You can pick out the points in both movies in which the peasants/droids unintentionally save the day as unwitting pawns in a much larger game, the only major difference being that the peasants agree to help through the promise of gold, whereas the droids are unfailingly loyal to their masters (free will often being a secondary consideration in the Star Wars Universe). The “help us and we’ll make you rich!” gambit is used on Han Solo instead.

Both films open with these lowly duos. C-3PO has the first spoken line of Star Wars – a fact that even die-hard fans sometimes forget. Artoo can only beep and warble, but the cowardly, panicky temperament of Threepio is almost a carbon copy of the characterisation of Tahei and Matashichi – you could almost imagine them fretting about being sent to the spice mines of Kessel. As if to underline how insignificant these peasants are in the grander scheme of things, Tahei and Matashichi are ignored as “fools” just three and a half minutes into the movie, a move mirrored in Star Wars with the infamous “no life forms onboard” line. 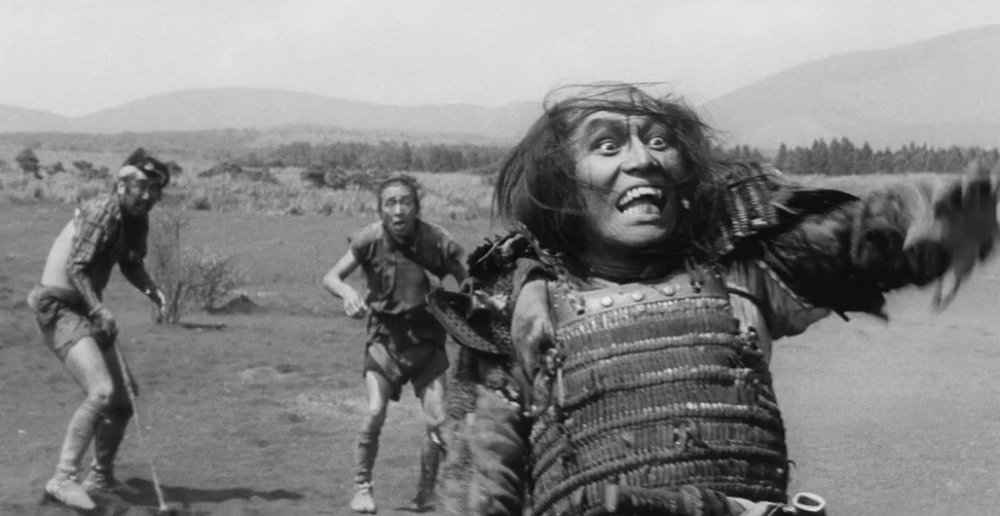 Within the first ten minutes of both films, the peasants and droids split up, but are then reunited when they are captured and sold into bondage. Tahei and Matashichi escape, only to be effectively enslaved by their own greed, while Threepio and Artoo are bought by Luke Skywalker – taken out of the frying pan and thrown well and truly into the firing line. Like characters in a horror movie, all any of them want is a quiet life – with the possible exception of Artoo.

The Hidden Fortress’s Princess Yuki is introduced as young, angry, defiant and more than capable of holding her own in a fight – a proto-feminist sadly lacking in 1950s Hollywood. She has lost her friends, her family and her kingdom. George Lucas went one better and destroyed his princess’s entire planet. But the upshot is the same: both can never go home again. Both are princesses of realms that no longer exist and both must place their trust in some unlikely characters in order to battle their way to safety from behind enemy lines.

Both films feature a legendary general, introduced around a quarter of the way into each – Rokurōta Makabe in The Hidden Fortress and Obi-Wan Kenobi in Star Wars. Both are branded “crazy” before being revealed as respected warriors. The Empire Strikes Back (1980) takes this trope one further with the introduction of Yoda, a strange, green, frog-like creature who turns out to be the greatest Jedi of all time. 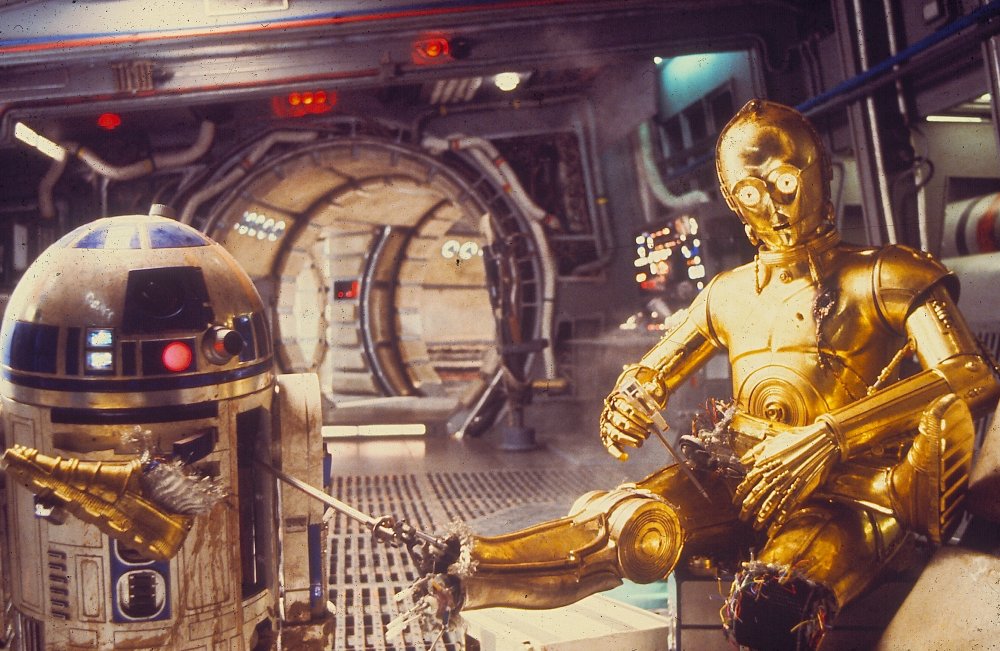 These men will risk everything to help the princess – Makabe going so far as to sacrifice his own sister, much to Yuki’s disgust. The idea of using a sacrificial double was revived in the confused prequel trilogy, with somewhat lesser emotional impact. Before the Star Wars storyline was muddied by the prequels, it was suggested that Luke’s Uncle Owen was in fact Obi-Wan’s brother, and that Obi-Wan knew that the stormtroopers would be coming for Owen and Beru the minute he saw Leia’s message and chose not to intervene in order to accelerate Luke’s destiny.

This almost fanatical devotion to ‘the greater good’ culminates in both generals duelling with a respected rival whom they fought years earlier in order to ensure the rest of their party escape danger. While Obi-Wan sacrifices his life at the end of act II (aka The Mentor’s Graveyard), Makabe goes on to best General Hyoe Tadokoro in front of Tadokoro’s men. His refusal to deliver the coup de grâce, sets up a neat dynamic that pays off in the denouement of the film – Tadokoro, punished by his own side for his failure to kill Makabe, turns traitor in order to save our heroes from almost certain death. In Star Wars, it’s swashbuckling space cowboy Han Solo who swoops in at the last moment to allow Luke to take out the first Death Star. Yet at the end of Return of the Jedi (1983), we see the similarly conflicted (and similarly facially scarred) all-round badass Darth Vader turn on his dark master and save the universe. 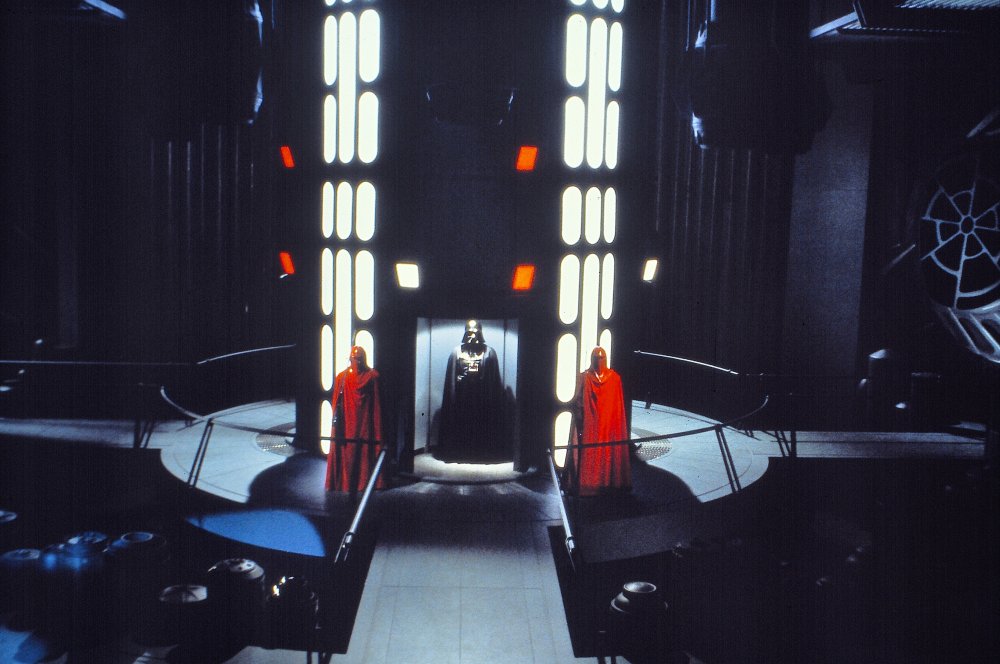 Eagle-eyed viewers will also notice the wipe transitions in both movies – a classic technique to imply passage of time between scenes. Those with keen ears may also note that the music around the six-minute, 45-second of The Hidden Fortress is strikingly similar to the droid cue from Star Wars. The way in which General Makabe’s horse chase scene is shot – he could be racing an X-Wing along a trench – and the pay off of our hero charging upon a large pack of surprised enemy soldiers, is repeated by Han Solo upon the Death Star to comic effect. Finally, the Big Bad in both movies – the Lord of Yamana and Emperor Palpatine – although often referred to, are characters that we never meet; a phantom menace for another instalment, perhaps.

So there it is: a princess, a general, a couple of bickering underlings and an action adventure romp behind enemy lines with swords, nobility, sacrifice, low cunning, a fair old dollop of luck and the dubious promise of riches at the end of it all. Hell, they even manage to have a few laughs along the way.

Of course, The Hidden Fortress wasn’t the only major influence on the creation of the cinematic behemoth that is Star Wars. And Kurosawa himself was heavily influenced by the sweeping Westerns of John Ford. He transposed the plots of two Shakespeare plays – Macbeth and King Lear – into Feudal Japan with Throne of Blood (1957) and Ran (1985). Lucas has spoken openly of his debt to Joseph Campbell’s The Hero with a Thousand Faces, a 1949 book which breaks down the journey of the archetypal hero from most world mythologies. 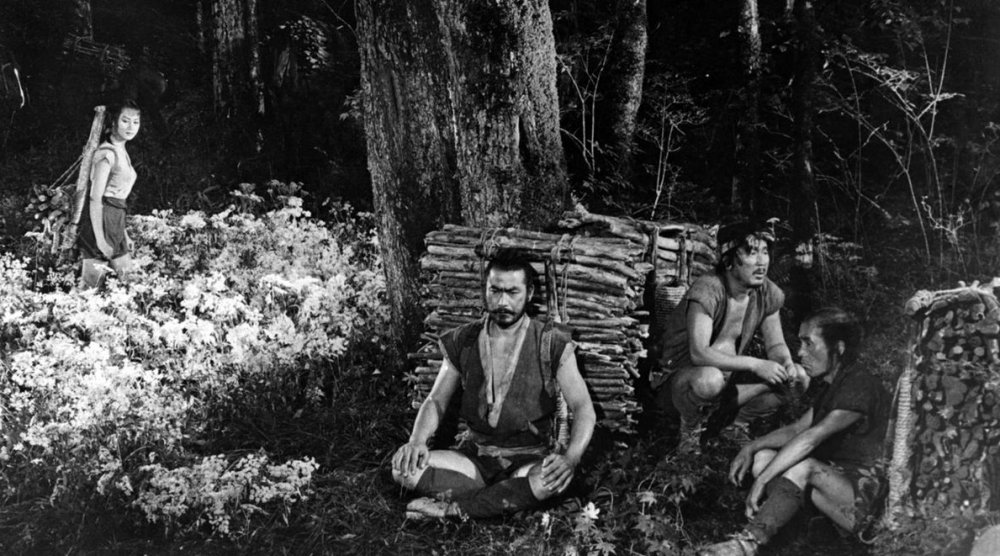 “A hero ventures forth from the world of common day into a region of supernatural wonder: fabulous forces are there encountered and a decisive victory is won: the hero comes back from this mysterious adventure with the power to bestow boons on his fellow man.”

Sound familiar? It should. It could be a plot summary of a thousand different films, including The Hidden Fortress.

Look hard enough at Star Wars and you’ll find it’s not just the opening text crawl that was lifted from Flash Gordon Conquers The Universe (1936-1940); there is a startling similarity between C-3PO and Maria, the robot from Metropolis (1927), as well as the dog-fighting scenes from The Dam Busters (1955) and 633 Squadron (1964). Special mention must be made of Stanley Kubrick’s 2001: A Space Odyssey (1968) – a film whose visual effects were, for their time, so cutting-edge people still believe that Kubrick may have directed the moon landings.

Star Wars owes a Wookiee life debt to 2001 for two reasons: one is that it paved the way for hyper-realistic three-dimensional spaceship effects, and the other is that it persuaded Lucas that his battle among the stars would sound better with a classical score – step forward Mr John Williams. You could argue that Star Wars would be an enjoyable film regardless, but the effects and music contributed to its being so much more than just another 70s sci-fi action adventure. They made it, for a time, The Greatest Show On Earth.

Without Kubrick, Campbell and Kurosawa, there would be no Star Wars – at least not in any form that we would recognise today. The genius of Star Wars, by accident and/or by design, was to somehow fuse these disparate elements together – ancient mythology, samurai warriors and futuristic spacecraft – and weave a spellbinding story that began a long time ago, in a galaxy far, far away…