The inside scoop on communications film legend Video Arts, founded by Anthony Jay and John Cleese 40 years ago. 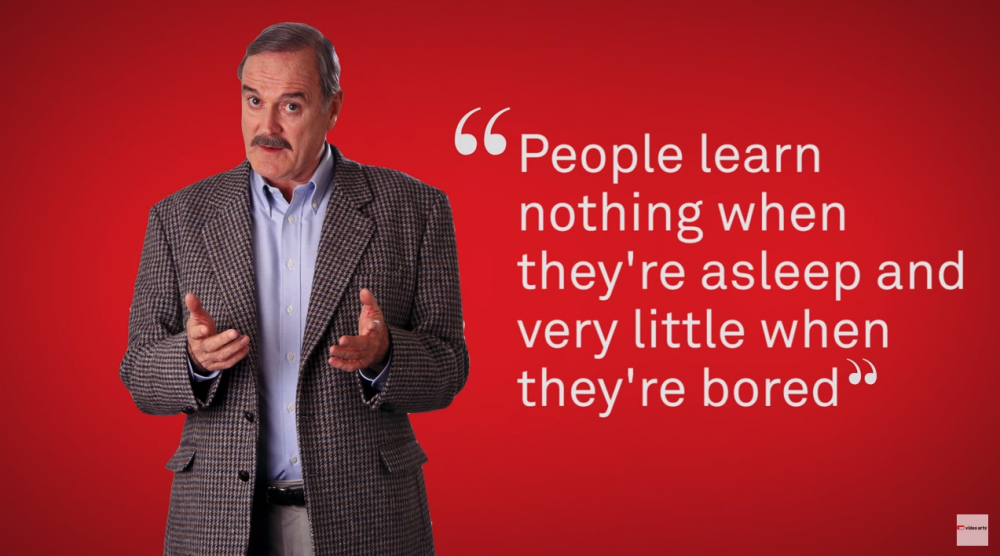 Though they can all be proud of the impact of their work, none of the companies featured in this series on communications filmmaking could claim to be household names in their own right. Until now: our 20th subject is not only a legend in the business – it also has a high public recognition factor.

I speak of Video Arts who, 40 years ago under founders Anthony Jay and John Cleese, stormed the citadel with a barrel-load of groundbreaking training films, many starring Cleese. It’s hard to overestimate what a sea-change these were, turning ‘industrial’ filmmaking on its head in several ways. They broke the mould (still dominant today) of films commissioned by corporations (at the time mainly light and heavy industries) for free distribution. Video Arts instead identified generic training needs, producing films about them without sponsorship – returning the investment when selling or renting them to interested training departments, usually within white-collar businesses. The films themselves marked an equally sharp departure from the stately industrial documentary: witty scripts, crafted (with consultants’ advice) to key learning points about skills and behaviours, using television talent and with high production values.

These films are fondly remembered, but Video Arts today has been rebooted for the online era – once again aiming to shake up the world of learning. It’s fascinating to compare the new work with the classics, a measure of the ways the working world has changed drastically in 40 years – and the ways it’s changed not a jot.

Video Arts is now part of the Tinopolis media empire. Its 20 full-time staff are headed by CEO Martin Addison and include former senior COI man Colin Burgess as head of content. Behind-camera creatives, hired project by project, are a mix of Tinopolis talent and corporate sector freelancers.  Subject matter experts include Peter Honey and Charles Jennings. As for on-screen personalities, where in the 70s and 80s it was Cleese and chums, and in the 90s Video Arts made much use of the alternative comedy gang, today’s stars include Robert Webb, Mark Heap, James Nesbitt and several Horrible Histories and The Thick of It cast members.

As we’ve seen, the core of the proposition was never just its content but how it was distributed. Mindful of Video Arts’ closeness to the broadcasting world, Addison (who’s been with the company 25 years) draws a comparison between the ways digital technology is revolutionising TV viewing and the changes it is making to organisations’ training programmes: in both cases, essentially, a shift from producer to consumer led environments. Where television was ruled by the schedule, today the platforms on which it sits matter more. Likewise, screen-based learning is no longer all about groups in a classroom watching a film ordered from a catalogue.

Hence, in October 2013, Video Arts launched its on-demand platform. Sort of an iPlayer for training professionals, it’s a password-protected site giving access to Video Arts titles, old and new, together with some films distributed on behalf of other producers. Subscribers can deliver them to staff via multiple devices, as well as in the old-fashioned way. The site also enables analytics on how they’re being consumed, and the capacity for uploading users’ own video content (something that certainly couldn’t happen in the 70s).

The Balance Sheet Barrier is an ingenious remake of an older Video Arts title (actually its second remake) in which animated cartoon versions of Cleese and Dawn French perform to the original soundtrack:

Trailer for The Balance Sheet Barrier

Addison predicts learning departments will become ongoing curators of video from multiple sources, including user-generated content and professionally produced material like theirs. Where Video Arts’ filmmaking schedule used to be centred on two or three ‘big’ productions annually, each treating several aspects of a large topic over an average 25 minutes running time, its producers today, mindful of the need for bite-sized e-learning (often self-driven) are also focused on building ‘libraries’ of 35 short films, each dealing with just one ‘learning point’. A trainer can select the one film they need, package several into an onsite session or release a series at planned intervals to employees’ own devices. The first two libraries to come on-stream are ‘Workplace Essentials’ and ‘Management Essentials’, trailed below:

Both series were recently recognised by Hamburg’s WorldMediaFestival and a third library, ‘Customer Service Essentials,’ is in the pipeline now.

As mentioned, the workplace anthropologist might usefully compare Video Arts’ various eras. Differences between them reflect how much the technology, and much of the culture, of work has radically changed. For example, today’s version of Meetings, Bloody Meetings, undoubtedly the quintessential Video Arts classic, takes in conference calls and skypes as well as boardroom gatherings. In the old version of So You Want to Be a Manager, the protagonist uses a Dictaphone, now it’s an app… But what haven’t changed are the ‘eternal truths’ with which training films are ultimately concerned, in this case the human failure to plan and steer meetings, and the insecurities of the newly promoted.

The eternal truths of training films themselves, as Anthony Jay saw them, are equally enduring. Addison puts it this way:

“As well as learning through trial and error, we can observe and reflect on others’ experiences, giving us clues what would happen if we did the same thing. Story-based video becomes a really powerful medium because it allows viewers to observe such situations, gaining insight as events unfold – think of it as an accelerated life experience. It may only take a two or three minute video story to trigger the reflection process. For this to work well, however, the learner needs to care about the consequences because it’s highly relevant to their personal goals and problems — relevance drives out reluctance to learn. Additionally, learners must identify with the characters and care what happens to them – they need to be credible, so viewers really become emotionally engaged in their stories.”