From the earliest days of cinema, filmmakers ducked around censorship laws to feed appetites for nudity on screen. 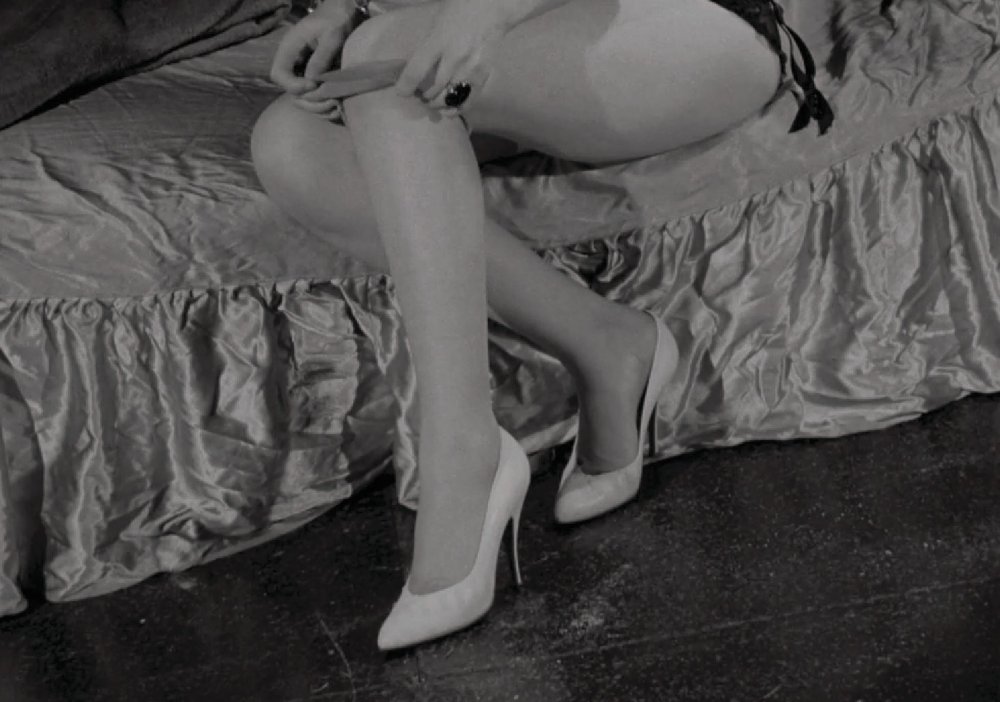 The first known example of British ‘cheesecake’ top ends The Pleasure Principle, a new collection on BFI Player exploring the history of British film erotica. Appropriately shot on a Kinetoscope or ‘peepshow’ camera, the Brighton-based pioneer Esme Collins’ A Victorian Lady at Her Boudoir (1896) is, in effect, a three-minute long stripshow in which the leading lady stops short in her shift, appears confused by the camera and tousles her hair by way of a wink to the audience.

By 1920 it was reported that no self-respecting brothel on the continent considered its facilities complete without a stock of ‘stag films’. Meanwhile, back in Blighty, films showing actual nudity, such as Nude Woman by a Waterfall from 1920, could only be seen in cinema or photographic clubs. The official adjudicators of public cinema, the British Board of Film Censors, had a strict rule at the time of no representation of sex (or God).

Nonetheless, in the aftermath of the First World War, filmmakers had little choice but to respond to some increasingly obvious social facts: by the turn of the 1920s there were over 60,000 prostitutes working in London, two thirds of them refugees from Belgium; one in four officers was returning from the front with VD; and, because another one in four never would return, welfare groups were disturbed by the subsequent decline in the middle-class population. Moreover, instead of the working classes, it was the less populous well-to-do who were practising birth control.

Throughout the 1920s and 30s so-called ‘propaganda films’ about birth control or the dangers from sexually transmitted diseases, such as The Uncharted Sea (1928) and The Irresponsibles (1929) were refused film certificates by the BBFC. This is surprising since neither of these two films depicts how such diseases are actually caught, only that they seem to occur outside “marital relationships”.

For its part, and despite its coyness, The Irresponsibles is direct in its information while also being effective as a melodrama. Here our heroine catches gonorrhoea from a grinning gentleman on a passing motorbike (we know that she’s on the path to perdition when she separates her legs to ride pillion). With a sulky look she refuses treatment, so her doctor recounts – via an ominous flashback – the sad tale of an upwardly mobile young lady who, due to her ‘charm’, is promoted to a position of responsibility at a fashionable milliners, only to go astray and contract VD. She likewise refuses treatment and, as she sits slumped, head bowed by the counter, the intertitle tells us that after such attacks: “Out of pity the firm kept her on [but] in a subordinate position.”

The Uncharted Sea, meanwhile, warns young men of the dire consequences that will arise from licentious living, and the price is not left in doubt. “I’ve paid heavily for one night out,” bewails our hero, George. “I’ve lost my job, and now I have gonorrhea.”

The censors’ no nudity rule persisted in the coming decades, and curiosities such as Action in Slow Motion (1943), which feature nudes in action (albeit shot at a distance), would not have not been seen in cinemas. By the beginning of the 1960s, however, one man was determined to find a way to put naked bodies on the British screen. In the summer of 1960 the pin-up photographer Harrison Marks told the head censor at the BBFC: “I’m going to be waving the banner for British nudists.” The censor was not impressed. But he knew that the board would have to pass Marks’ intended film, Naked as Nature Intended (1960), provided “the film’s setting is recognisable as a nudist camp or nature reserve”.

Starring ‘Britain’s most famous glamour model’, Pamela Greene, Marks’ film shows bikini-clad girls exploring a series of tourist traps such as Stonehenge and Minack Open Air Theatre in Porthcurno, finally for Pamela to take the plunge in the last 20 seconds and reveal all. The British ‘nudie’ film had arrived. But, if Naked as Nature Intended and such followers as Around the World with Nothing On (1960) or, a year later, Michael Winner’s Some Like It Cool shortchanged devotees of naturism, there was a place where the ever elusive nude could be seen.

It was between the acts put on in Soho’s strip clubs that the short uncertified films Goodnight with Sabrina (1958) and Burlesque Queen (1961) would have been exhibited. With tassels twirling, over-elaborate dance steps and bodies swathed in voluminous gauze, these 8mm shorts are caught in time, oddly prim in routines that could have been choreographed by the Women’s Institute.

Out of this collection, however, one genuine curio from the striptease era does stand out. Probably made for strip clubs and the 8mm home movie market, Harrison Marks’ Xcitement (1960) once again features his favourite model, Pamela Greene. From its very first shot of a slightly decrepit putti overlooking a divan adorned in fake leopard skin, Marks announces that this is going to be a strip show imbued with neoclassicism and culture.

While the production values of Xcitement might overstress the faux sophistication of the early 1960s, Greene was an impresario of the glamour industry in her own right, who along with Marks had created the massively successful ‘nude studies’ magazine Kamera in 1957, so she knew how to play to the camera and occupy the audience. And it’s with a natural adeptness for sinuous moves and peek-a-boo glances, as well as her straightforward charm, that she carries us along in a rare example of a striptease film living up to its title.

The 8mm shorts and British nudies struggled on for another three or four years until they gave way to the ‘shocking but true’ social documentary in such exposes as Stranger in the City (1961) or London in the Raw (1964), the latter of which featured a hair transplant operation as well as a more crowd-pleasing striptease act. Unfortunately, as their own directors conceded, the censor-appeasing morality within these films reduced audiences to near catatonia. “We had these dreadful psychiatrists explaining social behaviour patterns and all that crap, which no one was interested in in the slightest,” explained Stanley Long, the director of The Wife Swappers (1969).

Inevitably, at some point screen sexuality had to grow up. An early example of this need for realistic representations of sex can be seen in the Harold Pinter TV play The Lover (1963). As for nudies, filmed stripshows and their offspring, their reason for being now ran into a wall. In 1962, in her last interview, Marilyn Monroe said: “That’s the trouble, a sex symbol becomes a thing – I just hate to be a thing.” With the rise of feminism, women increasingly refused to be objectified, both off and on screen, and no longer would it be so easy for the male viewer to divorce himself from the subject of his gaze. The projector in the Soho sex clubs dimmed, the postman stopped delivering 8mm shorts, and thus this cinema sub-genre died.