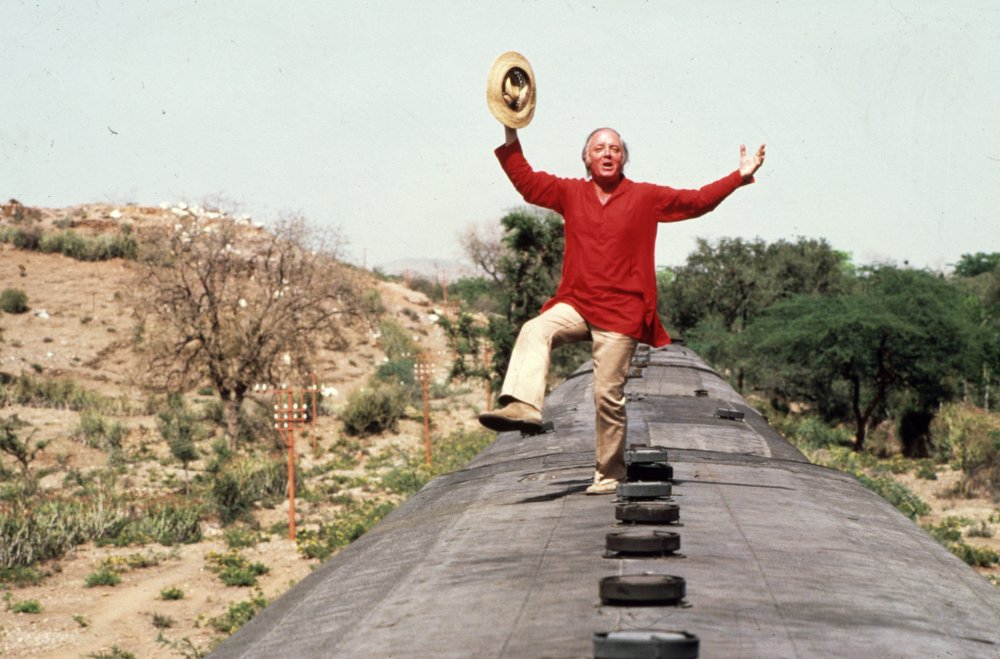 Lord Attenborough was best known for the historical epic Gandhi (1982), which won him two Academy Awards, for best director and (as the film’s producer) for best picture. As an actor, some of his most famous films include Brighton Rock (1947), The Great Escape (1963) and Jurassic Park (1993). He was Chairman of the BFI from 1981 to 1992.

Richard Samuel Attenborough was born in 1923 in Cambridge. His brother David is the renowned BBC naturalist. After an apprenticeship at RADA, his major film breakthrough came playing vicious spiv Pinkie in the 1947 film of Graham Greene’s Brighton Rock — a role he’d previously played on the West End stage.

He moved into film producing in the late 1950s when, in partnership with director Bryan Forbes, he set up Beaver Films, producing The Angry Silence (1960) and Whistle down the Wind (1961).

Attenborough made his directorial debut with 1969’s Oh! What a Lovely War, an ambitious musical satire set during the First World War. His second film, Young Winston (1972), charted the early years of Winston Churchill’s life, while 1977’s A Bridge Too Far was a wartime epic stretched across an even bigger canvas and featuring a massive all-star cast.

Before the acclaim for Gandhi, Attenborough made a smaller film that proved his capacity for making thrillers as well as history pieces: Magic (1978) starred Anthony Hopkins on chilling form as a deranged ventriloquist.

Based on the life of South African activist Steve Biko, Cry Freedom was a rare 1980s film that turned a critical eye on apartheid, while in the 1990s the director made a number of biographical films on famous subjects: Chaplin (1992), starring Robert Downey Jr as the eponymous silent film comedian; Shadowlands (1993), based on the life of C.S. Lewis; and In Love and War (1996), a First World War love story about the young Ernest Hemingway.

Knighted in 1976, Attenborough was made a life peer in 1993. His final film, Closing the Ring (2007), is a wartime romance starring Shirley Maclaine and Christopher Plummer.

The world has lost a very, very special person. Lord Attenborough was multi-talented as an actor, producer and world-class film director, but he was also a warm, compassionate and empathetic man and a friend to all those who met him. He loved the art and culture of film and was a tremendous advocate for every part of it, not least for the BFI where he was chair for 13 years, as well as for the British film industry, playing a major part in enabling it to attain and hold the position it has today as a world-leader. His support for individuals whether they were starting out in the industry or accomplished professionals such as himself, knew no bounds and his legacy will continue to be an inspiration for generations to come. We are all saddened. 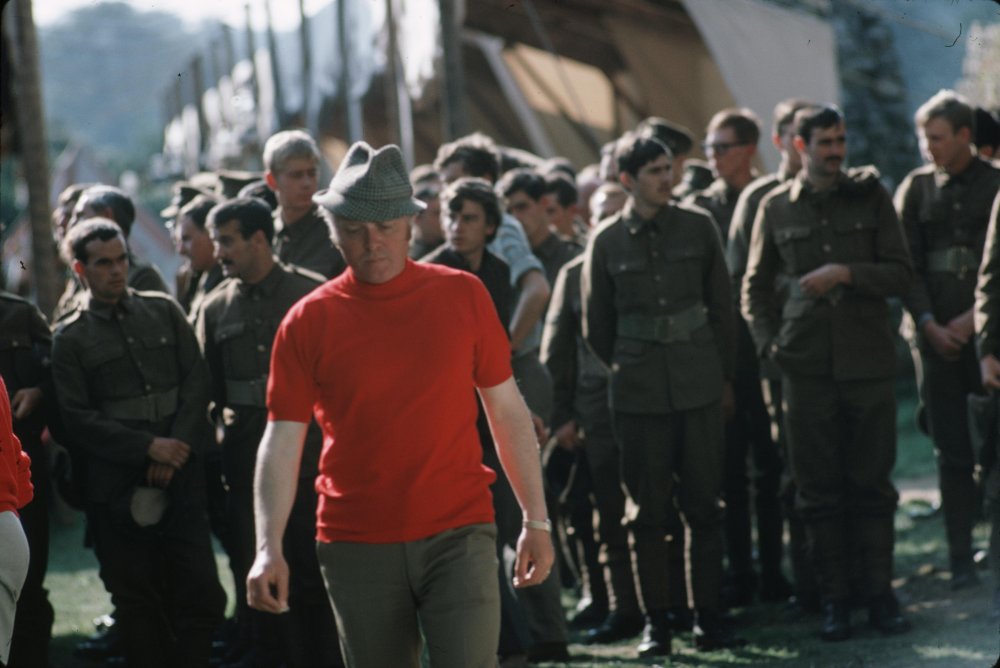 Long established as a leading man in British cinema, Attenborough made his directorial debut with 1969’s Oh! What a Lovely War, a musical satire about the First World War based on a stage play of the same name. 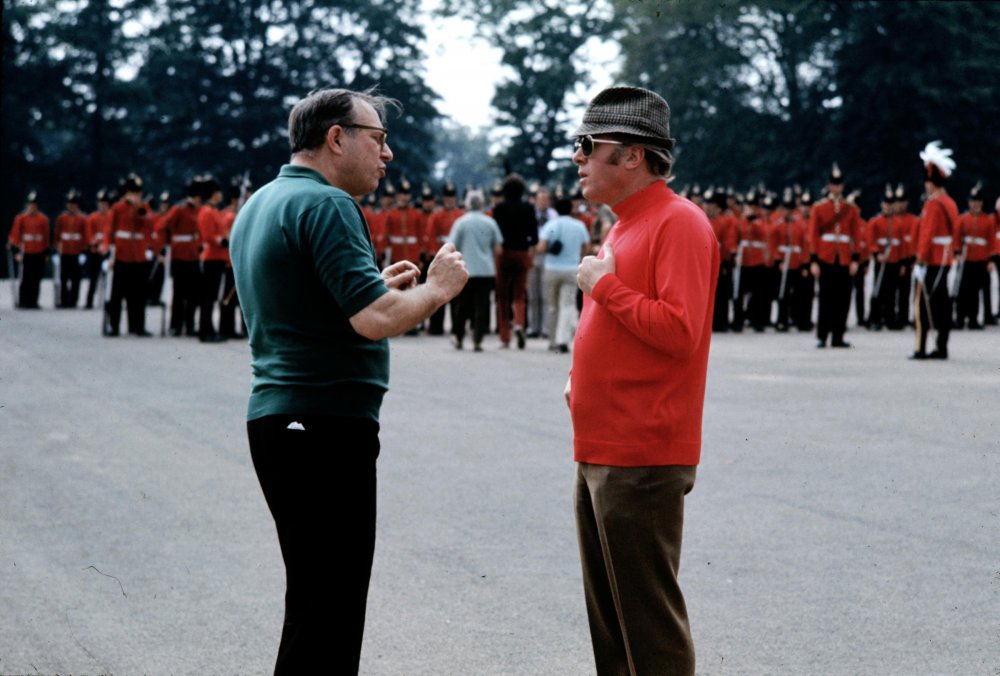 Attenborough continued to document British history with Young Winston, a 1972 biopic of Winston Churchill in his early years. 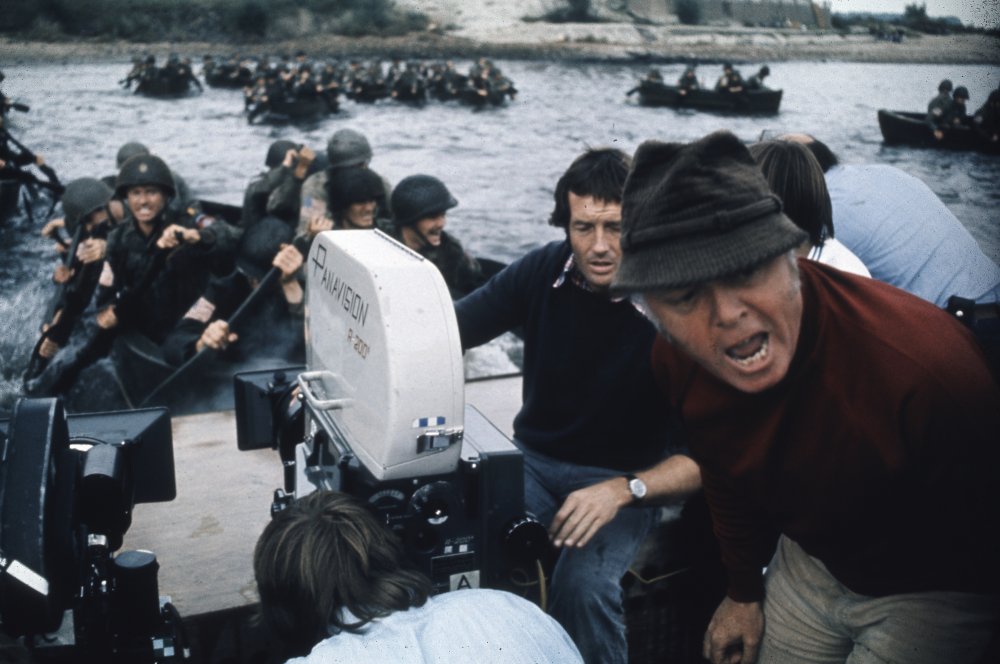 He marshalled an all-star cast – including Robert Redford, Michael Caine, Dirk Bogarde and Sean Connery – for the wartime epic A Bridge Too Far (1977), about the failure of Operation Market Garden during World War II. 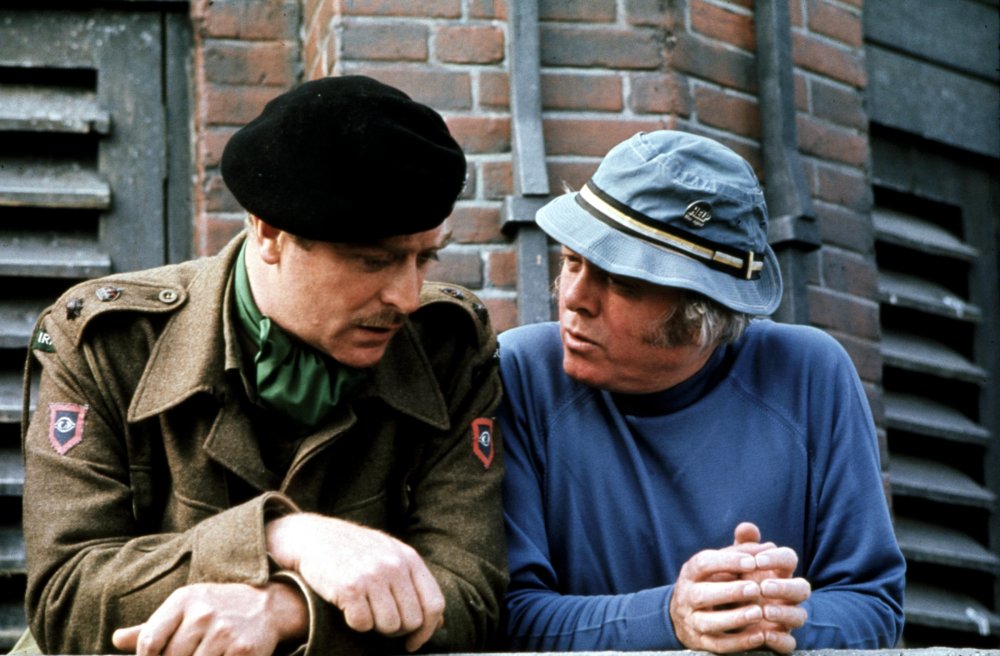 Here Attenborough talks with Michael Caine (who plays Lieutenant-Colonel J.O.E. Vandeleur) on location for A Bridge Too Far. 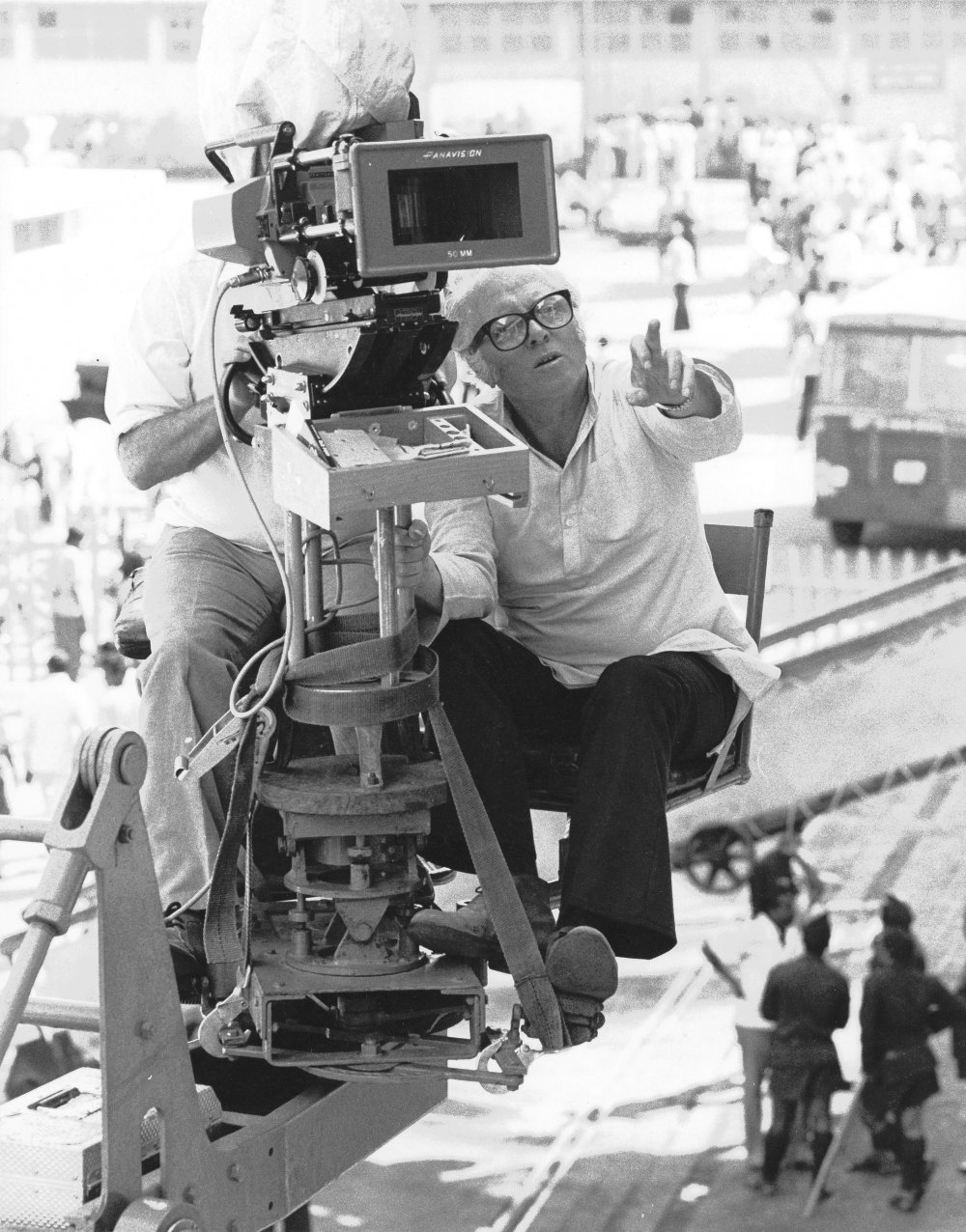 Richard Attenborough on the set of Gandhi (1982)

Attenborough behind the camera for his epic 1982 biopic of Gandhi. 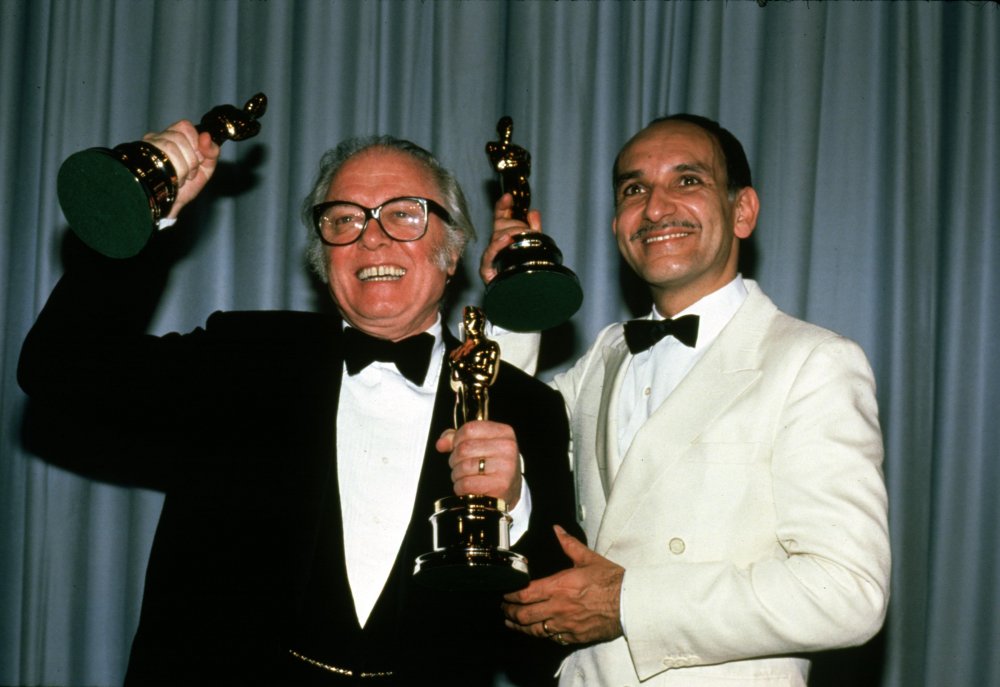 Richard Attenborough and Ben Kingsley with their Oscars for Gandhi (1982)

Attenborough and Ben Kingsley with their Oscars for Gandhi. 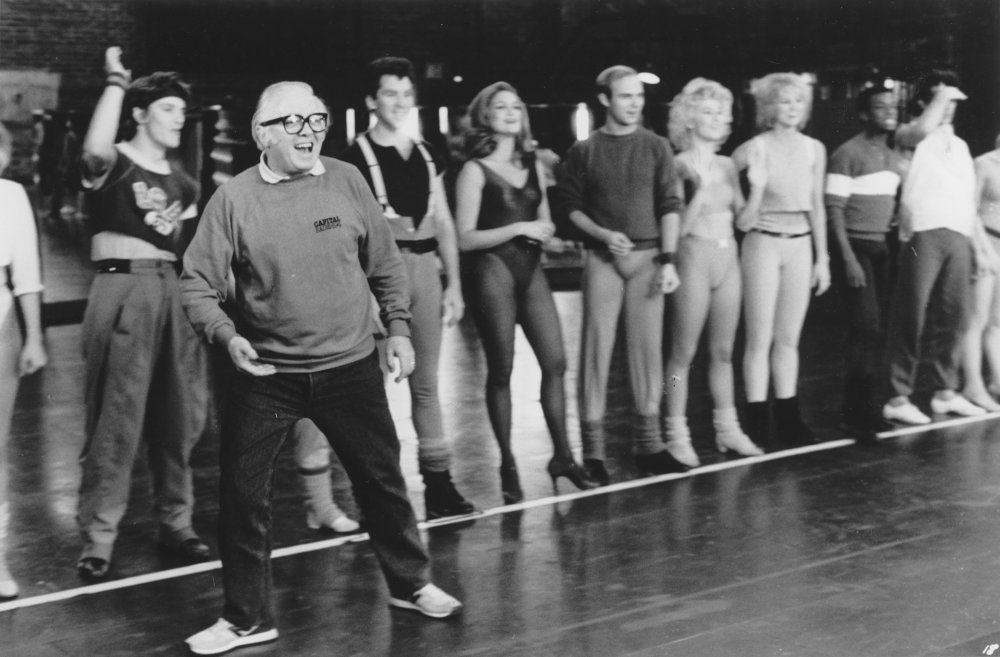 Richard Attenborough directs the dancers in A Chorus Line (1985)

Showing the dancers how it’s done in production for the 1985 musical A Chorus Line. 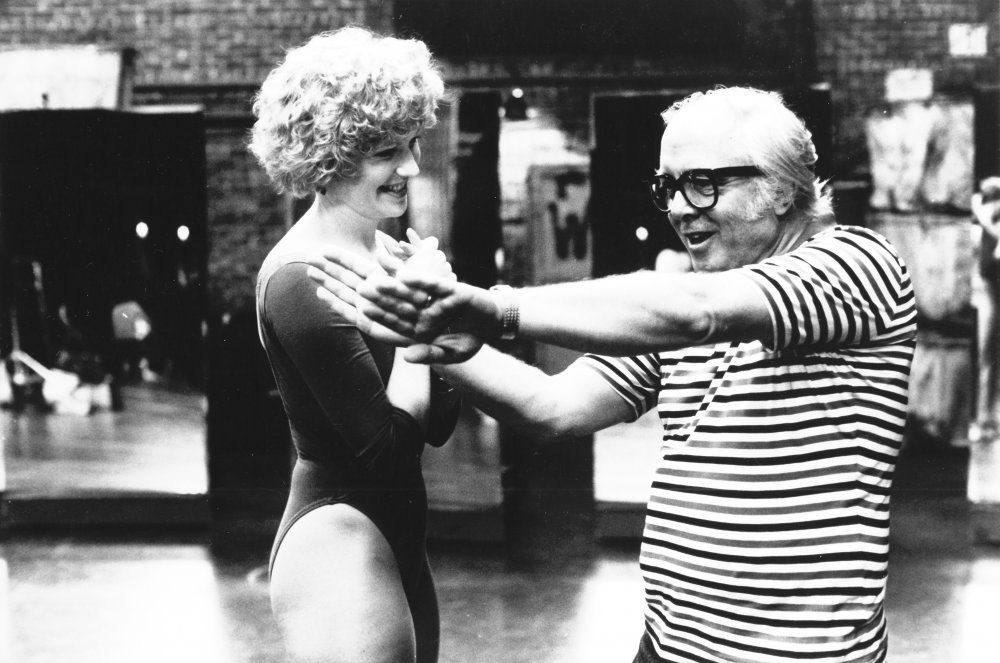 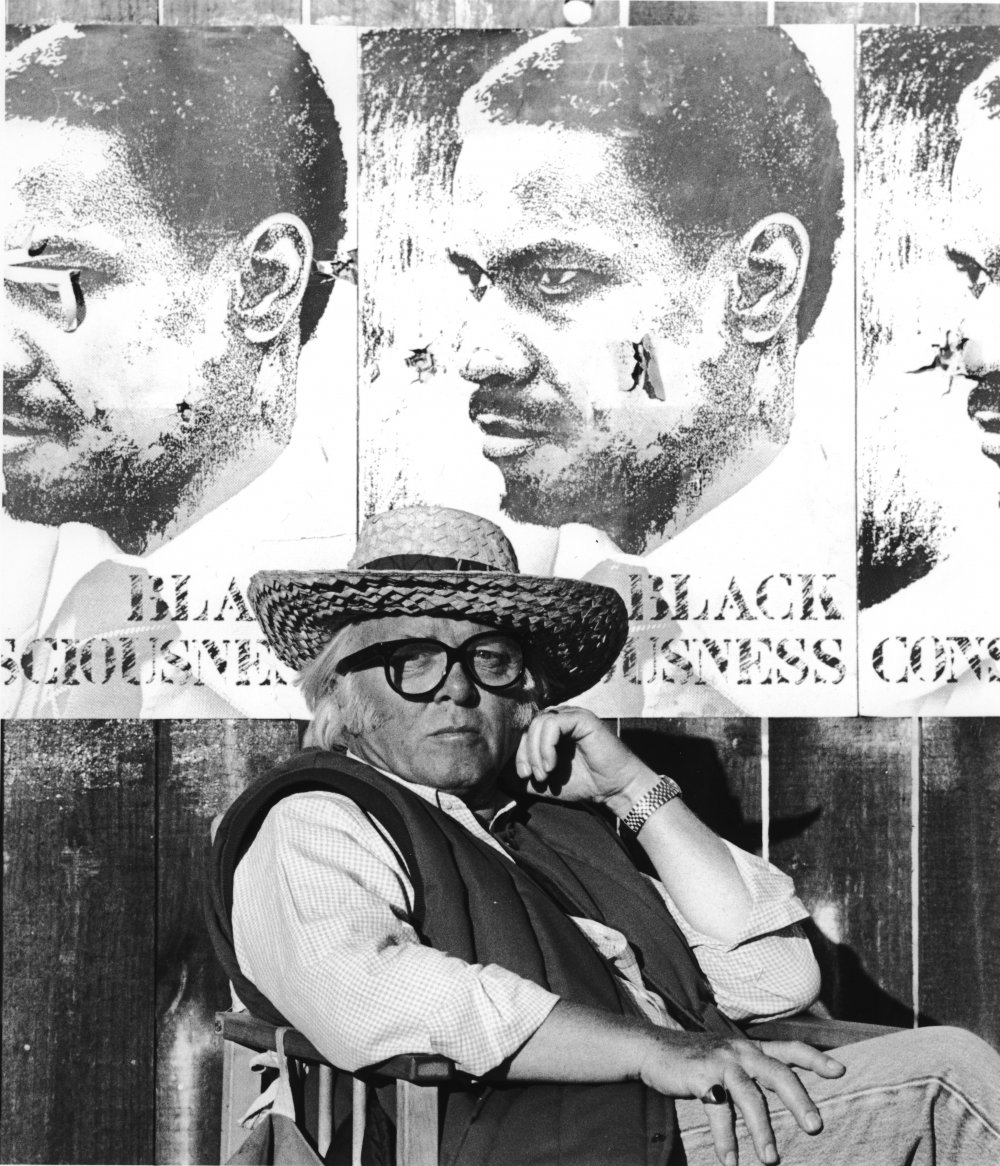 Richard Attenborough on the set of Cry Freedom (1988) 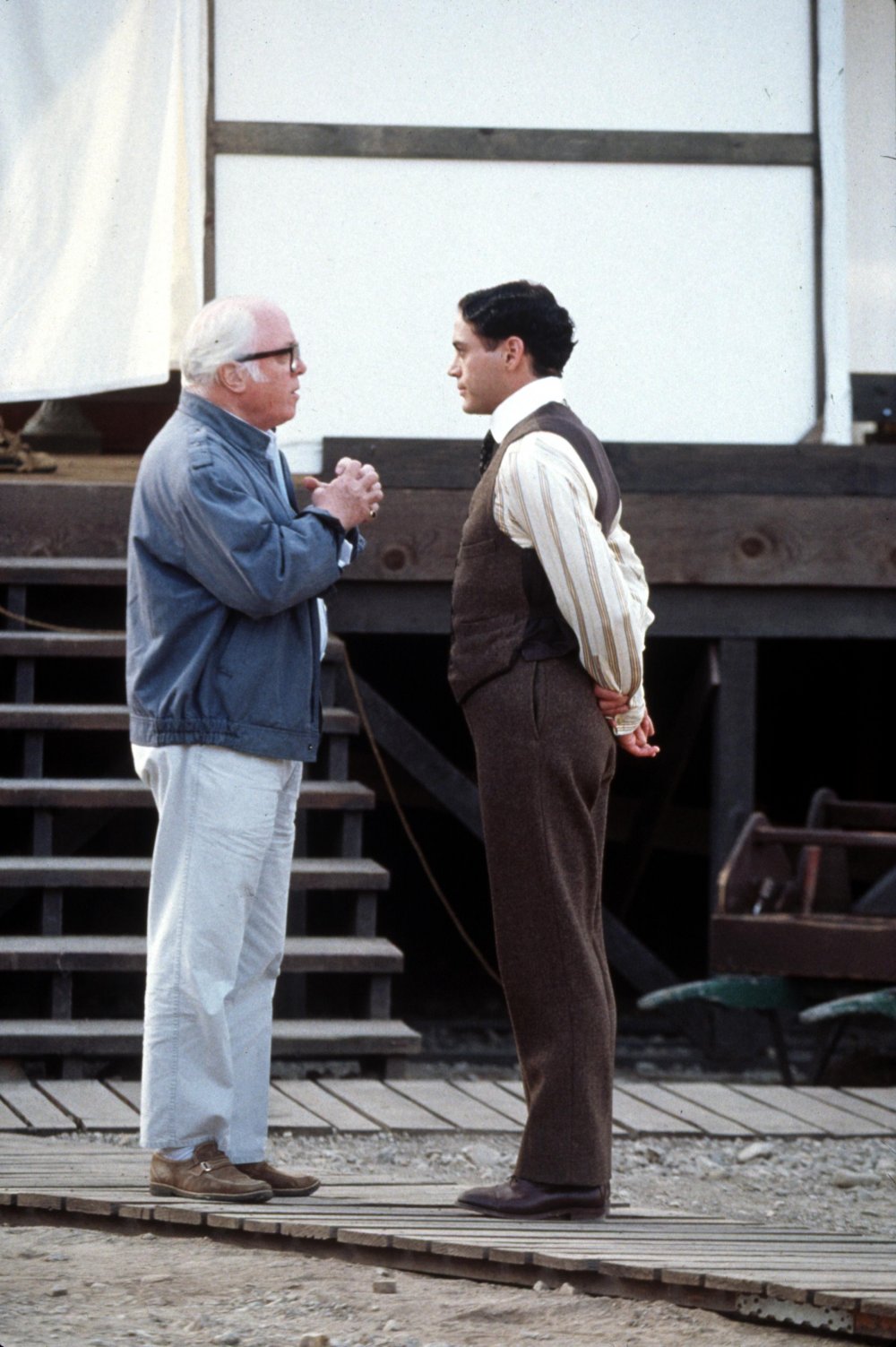 With Robert Downey Jr (as Charlie Chaplin) on the set of his 1992 biopic Chaplin. 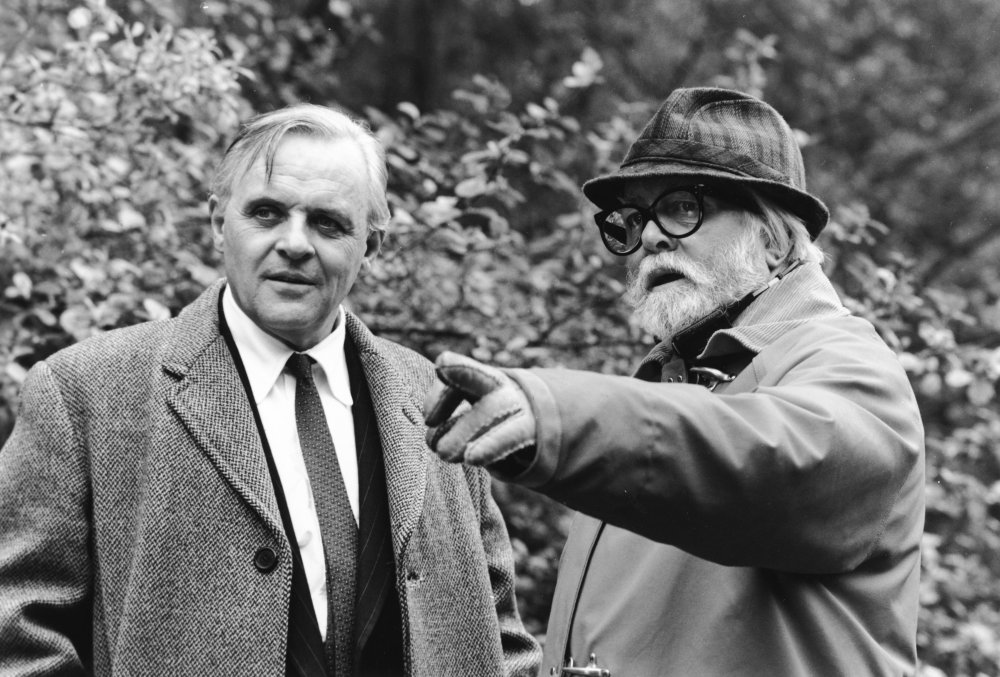 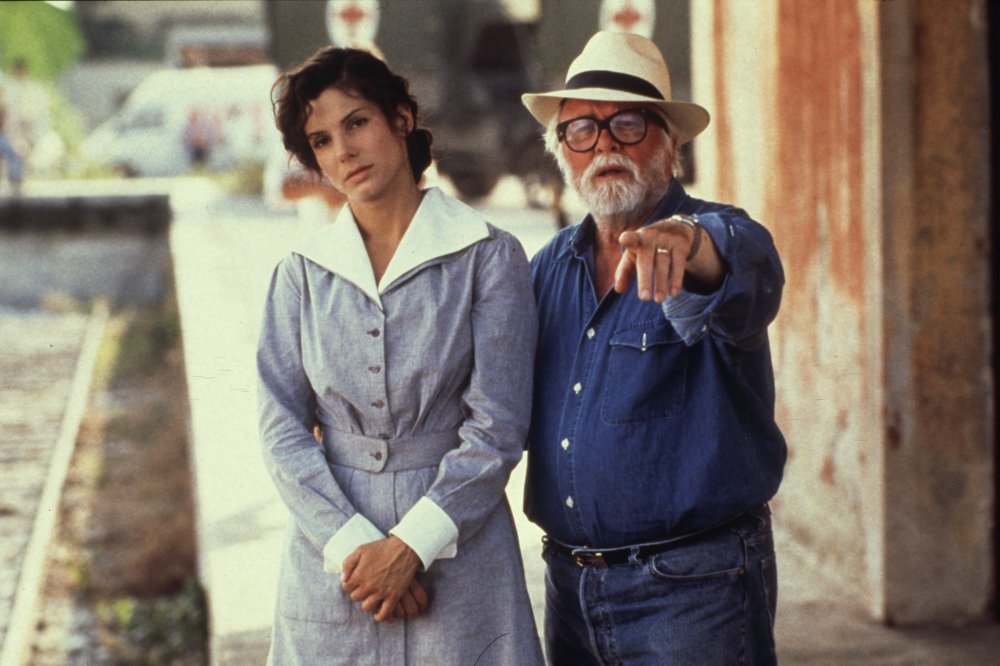 Richard Attenborough directing Sandra Bullock in In Love and War (1996)

Attenborough returned to the subject of the First World War for 1996’s In Love and War, starring Chris O’Donnell as Ernest Hemingway and Sandra Bullock as the nurse with whom he falls in love. 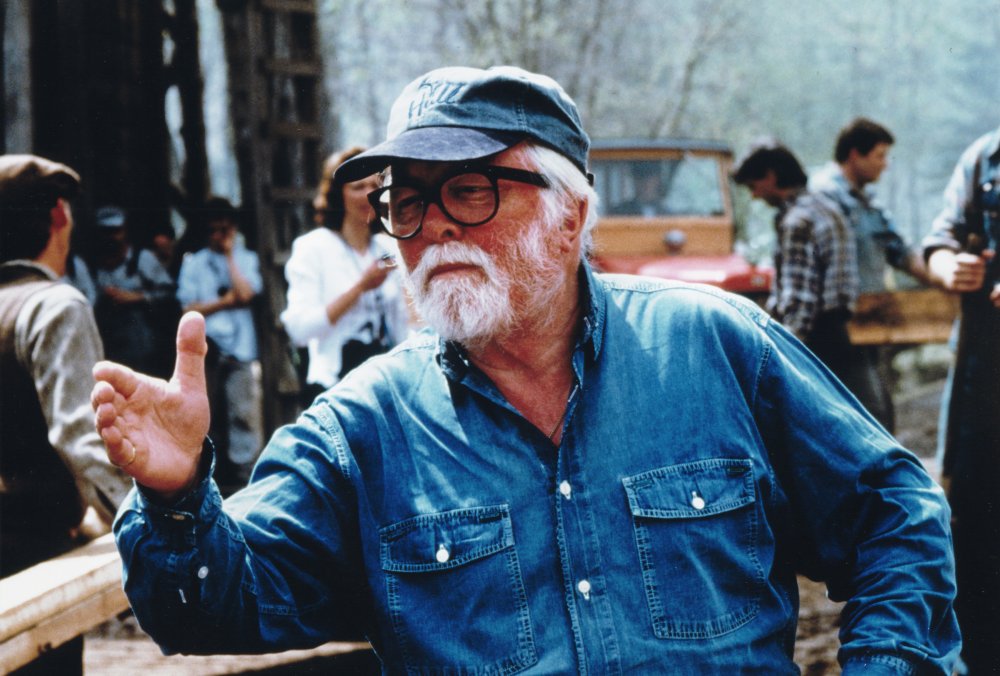 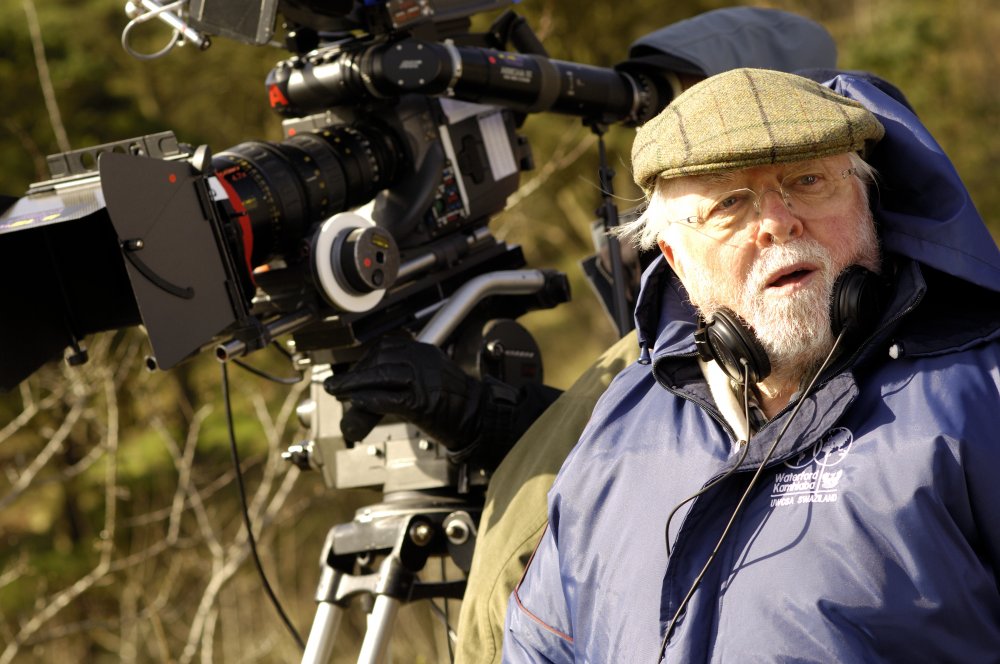 Richard Attenborough on location for Closing the Ring (2007)

On location for his most recent film, the 2007 drama Closing the Ring, starring Shirley MacLaine and Christopher Plummer.