Curator Josephine Botting pays tribute to the late, Oscar-winning costume designer, one of our last surviving links with the golden age of British cinema. 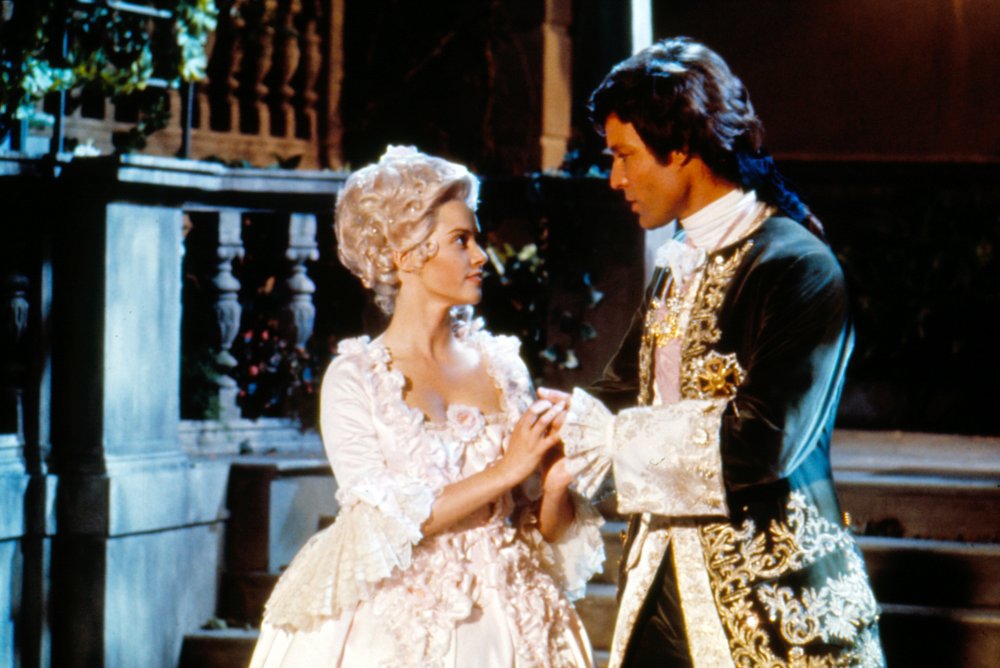 Julie Harris’s costumes for The Slipper and the Rose (1976)

Oscar- and BAFTA-winning costume designer Julie Harris died on 30 May at the age of 94. Over a 44-year career she worked on more than 80 films and television productions and dressed some of the biggest stars of both the British and American film industries.

Julie was one of the last surviving creatives who learned her craft in the golden age of British cinema, making her solo debut in 1947 on the Gainsborough film Holiday Camp, an assignment which dashed any illusions she had regarding the glamour of the movies, as she and the rest of the crew found themselves on location at Butlins in Filey, Yorkshire. 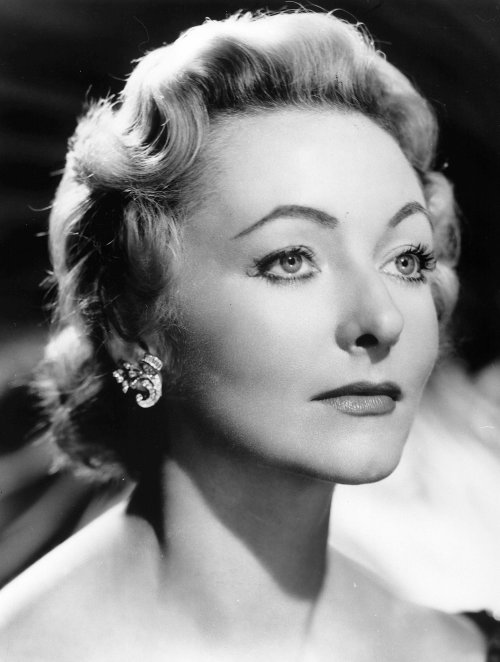 Harris during her years at the Rank studio

She went on to work with many of the studio’s stars, including Patricia Roc, Phyllis Calvert and Dennis Price but had an especially good relationship with Jean Kent, who specifically asked for Julie to dress her in Good-time Girl (1948), in which she played a juvenile delinquent who gets in with a shady crowd. She and Jean were reunited at BFI Southbank in 2011 at a celebration of Kent’s 90th birthday.

After receiving excellent on-the-job training at Gainsborough, under the tutelage of the studio’s talented head of costume, Elizabeth Haffenden, Julie went on to get a contract with Rank in the early 1950s. There she designed not only film costumes but also evening wear for the stars’ public appearances at premieres and festivals such as Cannes. One of the more flamboyant stars she had to cater for was Diana Dors; she was once instructed to dye an entire outfit turquoise, fur and all, to match her Rolls Royce and also designed the infamous ‘mink bikini’ Dors wore on a gondola at the 1955 Venice Festival (actually made of rabbit as mink was too difficult to get).

As Rank began to wind down, Julie went freelance and found herself in great demand. Over the next 30 years, she worked with Hollywood stars such as Jayne Mansfield, Joan Crawford, Bette Davis, Lauren Bacall and Alan Ladd and directors Alfred Hitchcock, Joseph Losey, Billy Wilder and John Schlesinger. It was for Schlesinger’s 1965 film Darling that she won her Oscar; typically, she was too busy working to go to collect it in person. 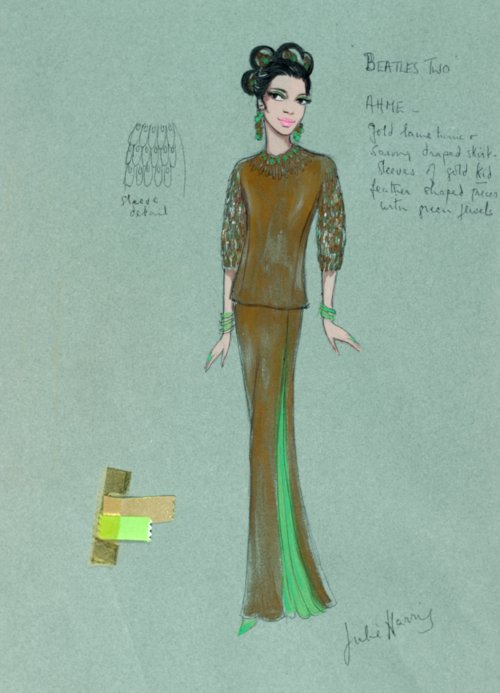 After working on the Beatles’ first two films (designing a set of fabulous Indian-inspired costumes for Eleanor Bron in 1965’s Help!), she worked with Bryan Forbes on The Wrong Box (for which she won a BAFTA in 1967), The Whisperers and Deadfall (both 1967). Forbes and his wife Nanette Newman became close friends and she was later invited to work on his 1976 Cinderella adaptation, The Slipper and the Rose. This was to become Julie’s favourite of all her films and still has many fans; while Julie was in hospital at the end of her life, a fellow patient was thrilled to learn that in the next bed was the person who had designed the beautiful ball gown that she had fantasised about wearing as a girl.

The Slipper and the Rose allowed her to dress again one of her favourite actors: Dame Edith Evans. Evans’ demeanour was so regal that it had been incredibly difficult to dress her ‘down’ for the role of the lonely old woman in The Whisperers (1967) – even in a moth-eaten fur coat Julie had picked up on the Portobello Road, Evans still managed to look like Lady Bracknell. Another of her favourite stars was Deborah Kerr – with whom she worked on five films – whose poise and elegance were a costume designer’s dream.

Julie lived for her work and didn’t let up throughout the 1970s and 80s, working on the Bond title Live and Let Die (1973), science fiction film Rollerball (1975) and John Badham’s 1979 version of Dracula, starring Frank Langella and Laurence Olivier. 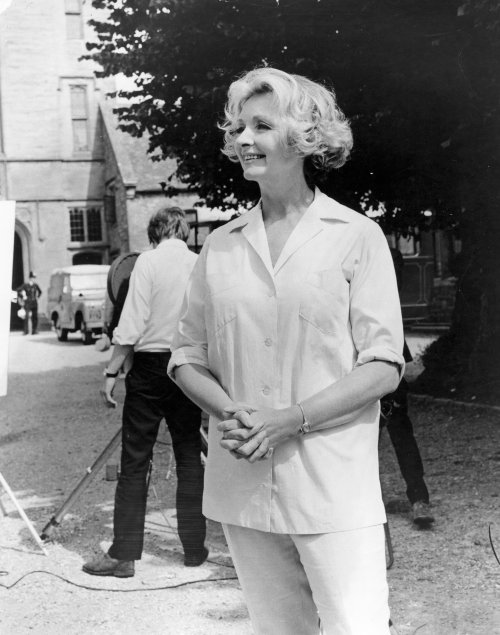 Most of her later credits were TV movies but she brought to them the same style and attention to detail which characterised her work. She was professional to the core: once sitting up all night with a team of local art students painting stripes on the bands of piles of straw boaters to be worn by the schoolboy extras in Goodbye Mr. Chips (1969), which had been delivered minus the school colours.

On her retirement at the age of 70, Julie concentrated on her other passion, painting still life, and her work was exhibited at a London gallery. She loved to meet people and talk about her work but with little regret; she had practised her craft in a period when there was the time and resource to get things right. She knew that the frenetic pace and pressures of contemporary filmmaking would not have suited her way of working, not to mention the absence of the glamour which she so adored. But she always kept up to date and maintained an interest in fashion and production which was testament to her lively engagement with the world.

I was lucky enough to know Julie well and shared many afternoons with her watching her films or listening to her reminiscences of the stars she worked with and the experiences she had. She would welcome friends and strangers alike into her home and loved company of all ages. She will be very sadly missed by her friends and fans. 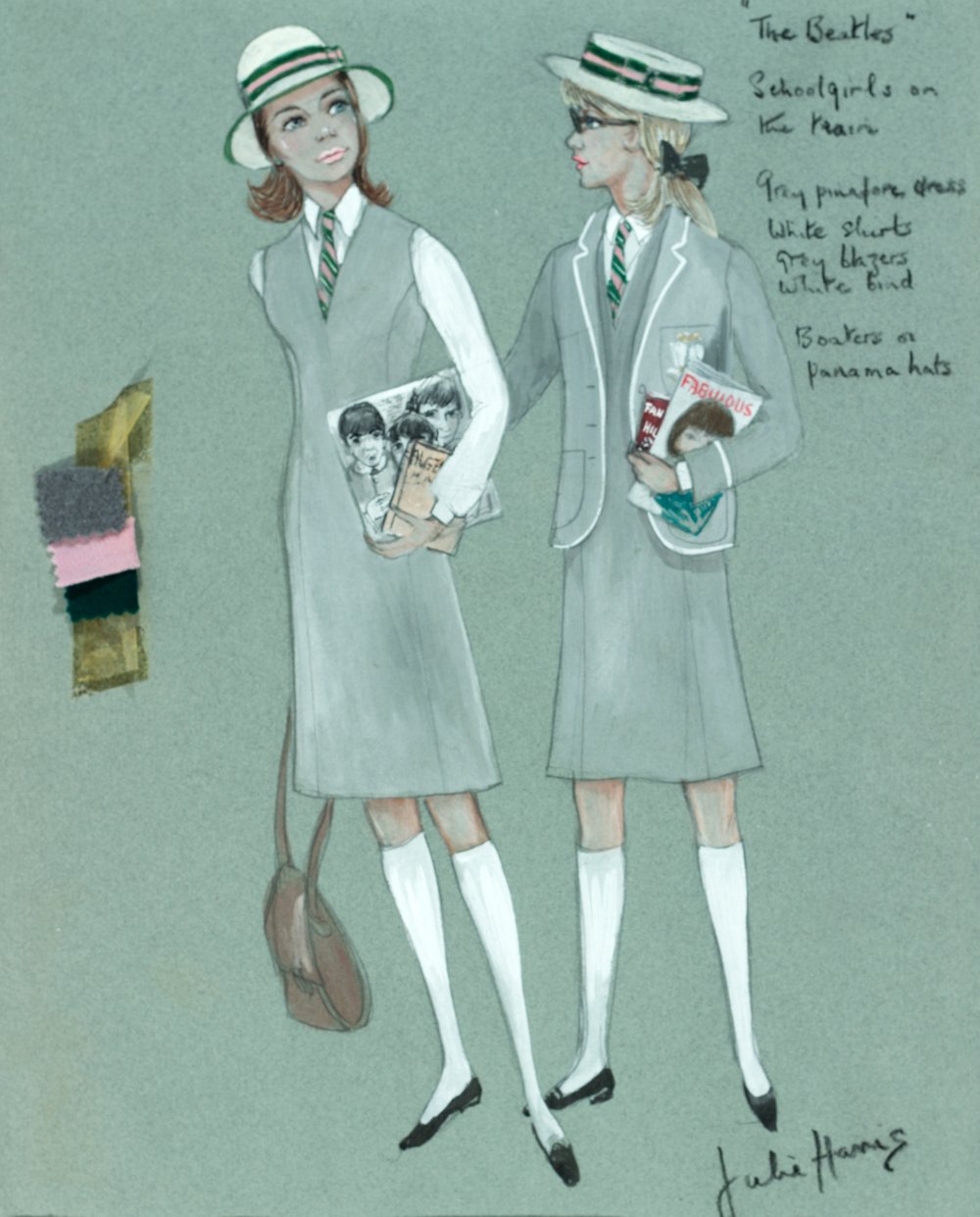 Harris designs for the schoolgirls in A Hard Day’s Night (1964)
Credit: Julie Harris 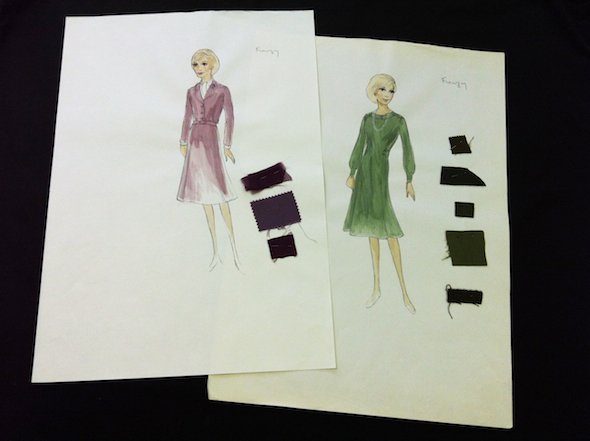