Whoopi Goldberg has always seemed so smart, funny and brash. That’s what makes her delicate debut as the downtrodden wife in Steven Spielberg’s southern drama The Color Purple so remarkable. 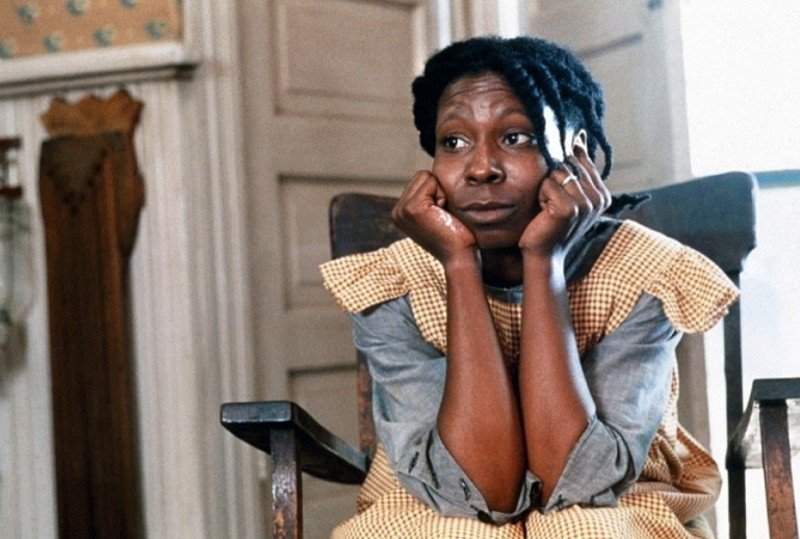 Whoopi Goldberg made her film debut in The Color Purple almost 10 years before I was born, and on 13 November she turns 62 almost exactly 38 years before I will reach the same age. But, while the movie itself has aged a little rustily, Goldberg’s delicate performance as Celie – a routinely abused black woman in the American south who eventually finds her strength in the relationships she forges with other women after being torn away from her sister at a young age – has always seemed to me to be eternally worthy of the Oscar nomination she received for it in 1986. And Goldberg herself is still going strong too.

What’s interesting about Goldberg’s turn in this movie is how far away from her public demeanour the original, downtrodden character of Celie is for much of the production. Both in every live interview I’ve seen of her and on The View, an American chat show where she has served as one of the main hosts since 2007, Goldberg is smart, funny, brash and loud; the very opposite of the quiet, hard-working Miss Celie, so afraid of her husband’s wrath. 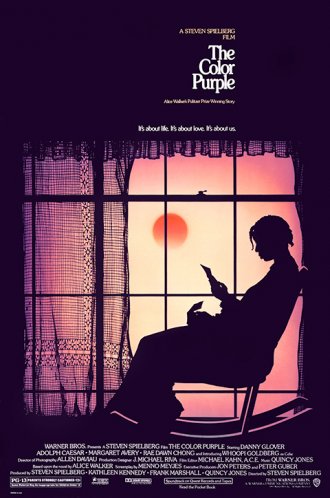 As Goldberg said herself in her Golden Globe acceptance speech for the film, she was aware from the outset that the producers were taking a ‘big chance’ on her. Before working on The Color Purple she had been performing mainly as a comedian – making audiences laugh with her one-woman standup shows.

In Direct from Broadway, for instance (her first TV special from 1985), among other characters we see her personifying a surfer dude (“I totally love to surf, I feel rea-ally connected with ocean”), an old rasta and a hysterical southern matriarch. Among other quirks, Goldberg has always shaved off her eyebrows as a style choice, and nearly changed her name to Whoopi Cushion – settling on Goldberg as it wasn’t quite as ridiculous.

But, as The Color Purple’s director Steven Spielberg later said in an interview, while Goldberg may not have been the obvious choice for such a serious acting role, he knew that he’d found his actor as soon as he laid eyes on her: “I would never hire a Celie who wasn’t strong,” he explained.

I imagine it must have taken some restraint from Goldberg to morph as effectively into the young, subjugated Celie as she does, but it is her display of strength that makes the movie whole. At one point of calm rage Goldberg’s character is only a movement away from slitting the throat of her abusive husband, known as Mr ______, and later she threatens him with a knife.

“I’m poor, black, I might even be ugly, but dear God, I’m here. I’m here,” she tells him soon afterwards as she rides away into the sunset. Goldberg’s power on screen in these moments is palpable.

“The way I played Celie,” she once said in an interview with critic Roger Ebert, “was to stand back from her. There’s a theory that an actor should identify with the character. Well, I loved her, but I didn’t identify with her. Celie is so far away from me, it was easy to allow her pain to be there, because her life has so little to do with mine.” 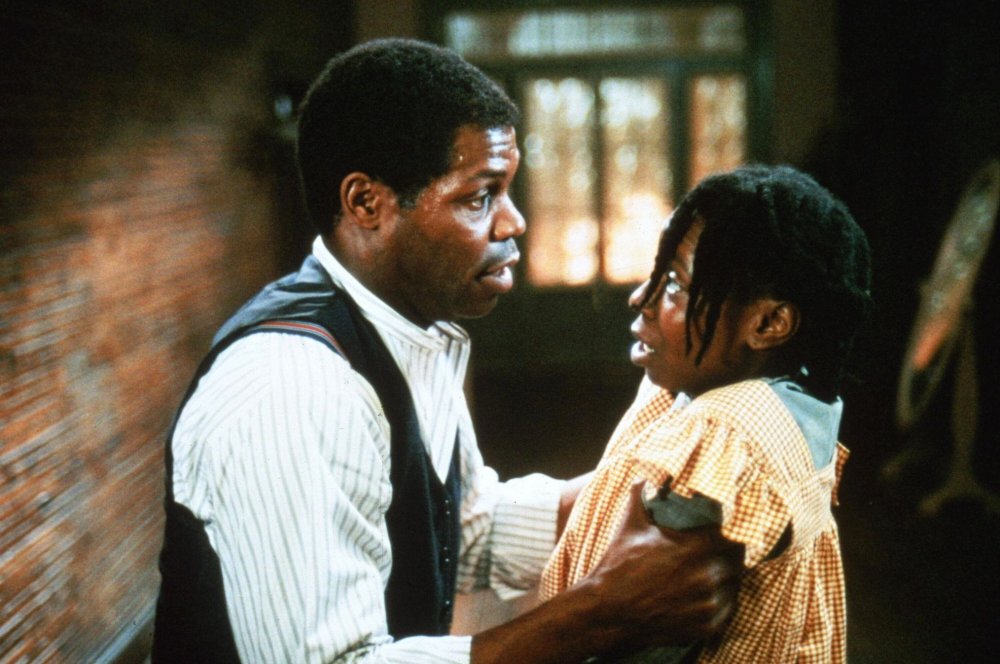 The Color Purple is based on the bestselling epistolary book of the same name, written by Alice Walker in 1982. The film is quite a faithful adaptation: we track Celie’s upbringing – her two underage pregnancies as a result of being raped by her “father” and children taken from her, the subsequent death of her mother, her marriage to Mr ______ aged only 14, who had originally fallen in love with her even younger sister Nettie.

The banishment of Nettie follows, when she refuses Mr ______’s sexual advances after she comes to live with the couple, then there’s Mr ______’s genuinely horrific physical and sexual abuse of Celie, and, eventually, the love she finds in her dalliance with Mr ______’s long-time mistress, the magnetic Shug Avery. 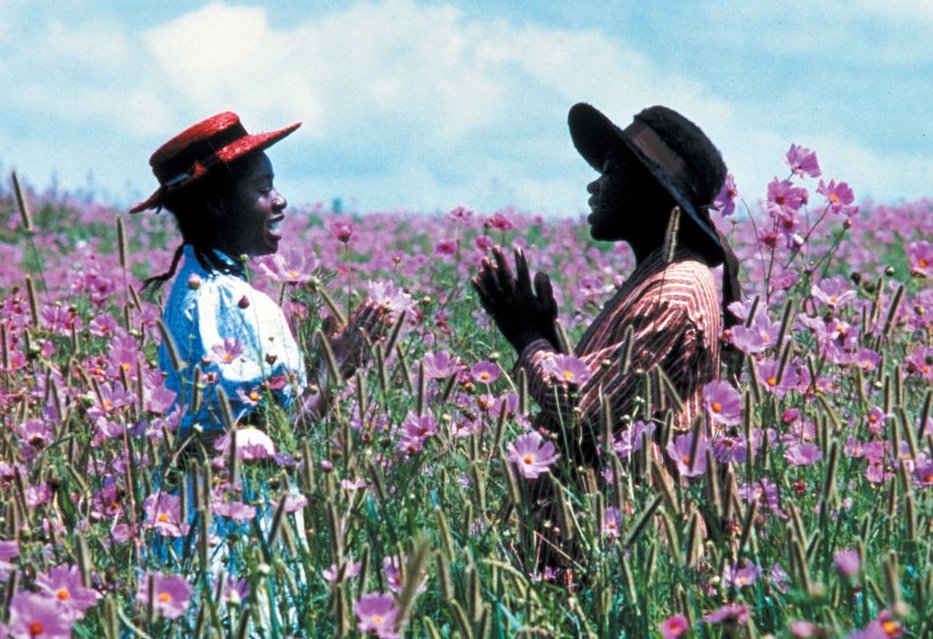 Of course, a core theme of the novel, and one that I’d argue that is not explored fully enough in the film, is the sexuality of Celie. In the novel The Color Purple we have passages detailing the sexual nature of the relationship between Celie and Avery, and what the latter learns from the former (“Right down there in your pussy is a little button that gits real hot when you do you know what with somebody. It git hotter and hotter and then it melt. That the good part. But other parts good too, she say.”) – although it must be noted that for the time seeing any type of sexual contact between two black women on screen was (and still is) unusual and groundbreaking in its own small way. In the movie this is confined to a few chaste kisses between Goldberg and Margaret Avery, the actor who plays the beautiful singer.

Despite this slightly underwhelming aspect of the film, one of the other reasons I have always been such a big fan of Whoopi Goldberg is because of her ongoing support of the LGBT community since The Color Purple first played in cinemas. She has always recognised her gay and lesbian fanbase and, while (ironically) I don’t want to lavish too much praise upon her allyship, it’s worth noting that in 1987 she memorably pushed a man afflicted with AIDS in a wheelchair through a march in Washington seeking gay rights.

More recently, in 2008, she held a sign that said “For My Friends – Equal Rights” during a Prop 8 protest in New York, and in 2010, she helped launch the ‘Give a Damn’ campaign with Cyndi Lauper, to raise awareness of LGBT discrimination.