A new exhibition at BFI Southbank celebrates a generation of visionary Polish poster artists who created their own unique spins on British films released in Poland in the post-war period. 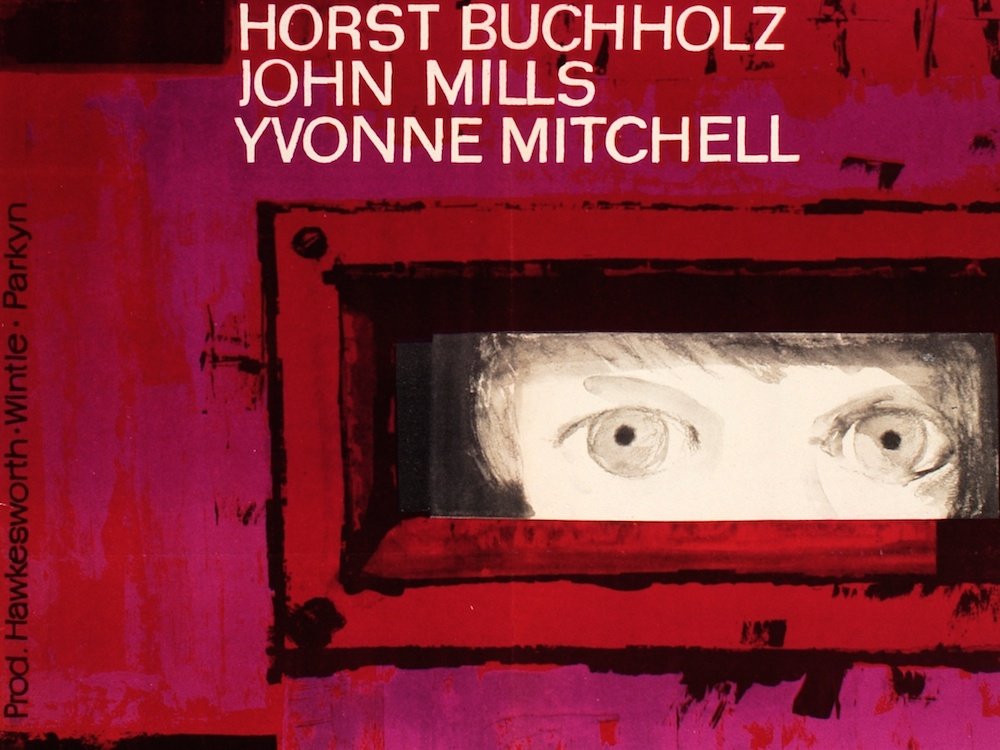 Detail from the Polish poster for Tiger Bay (1959)

Established in 1947, the Polish School of Posters was a loose association of artists headed by Henryk Tomaszewski. Tomaszewski taught at Warsaw Fine Art Academy and encouraged his students to move away from posters created in western Europe, which he considered to be too commercial.

It was a bold undertaking but the breakthrough came at the 1948 International Poster Exhibition in Vienna (organised by Austrian graphic artist Victor Theodor Slama). Two thousand posters from 18 countries were exhibited, and Tomaszewski and Eryk Lipiński won 12 gold medals between them. 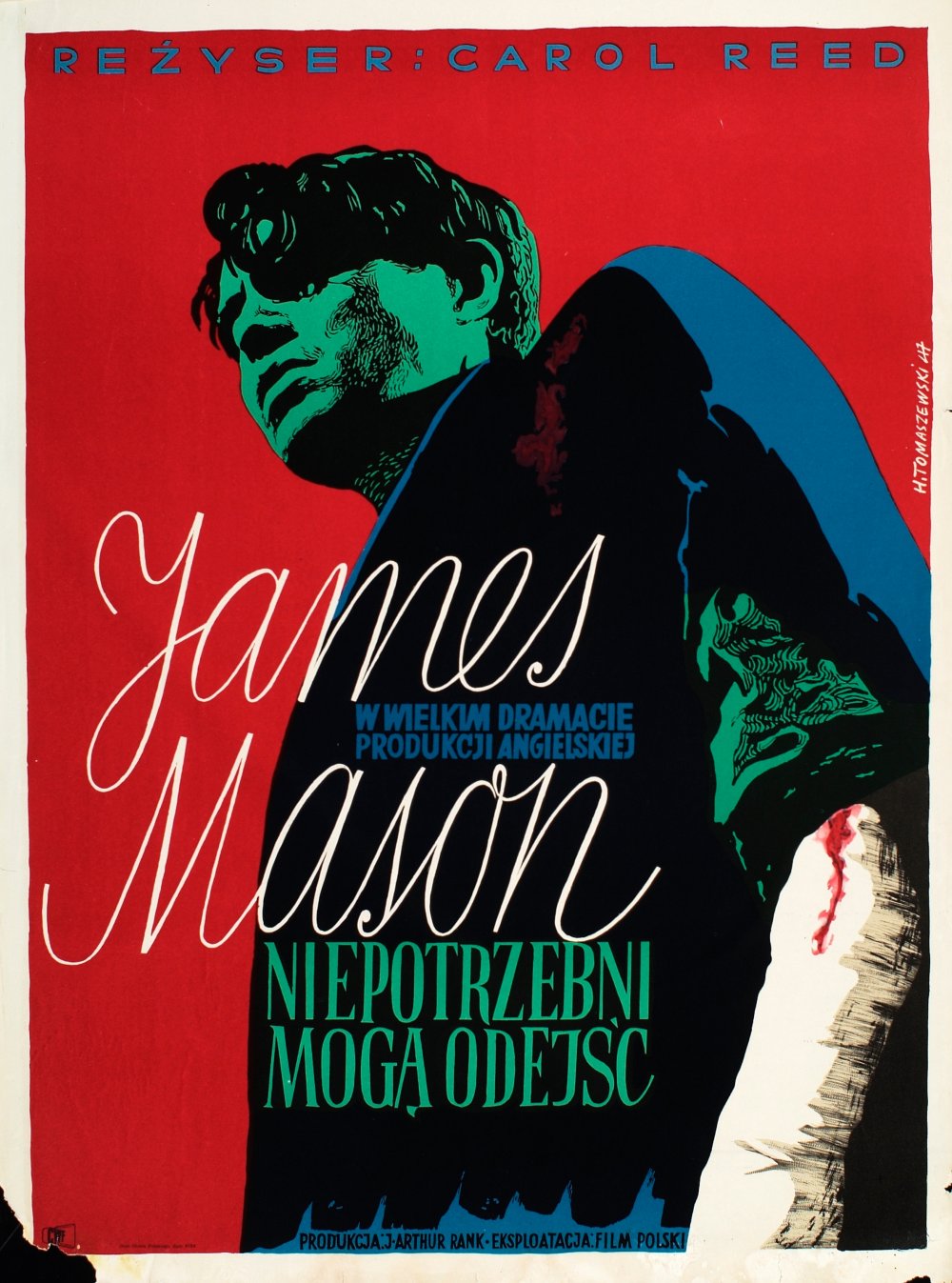 Among the medal-winners was Tomaszewski’s design for Carol Reed’s classic thriller, Odd Man Out (1947), which represents the film through a single image of James Mason as Johnny McQueen, the anti-hero who is wounded and disappears in the back alleys of Belfast. Painterly in style, Tomaszewski’s image references the crucifixion and martyrdom as portrayed in religious paintings, with Jonny painted on a blood red background – a very different reading of the film’s noir atmosphere. 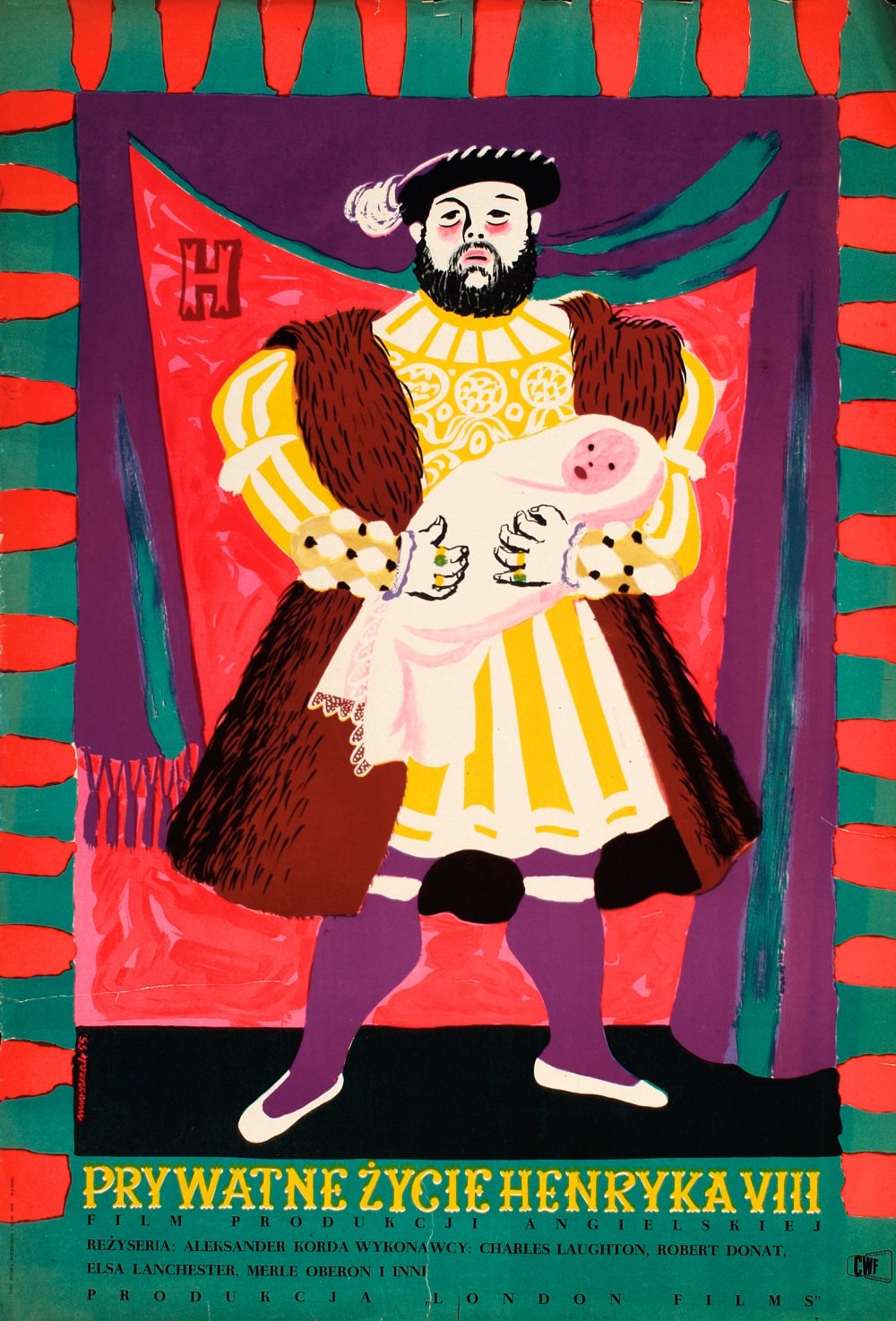 Drawn from BFI , our new exhibition Polish Film Posters: 1954 – 1970 features a range of such reinterpretations of British films of the time, which are often starkly different to the original publicity campaigns. Take for example Josef Mroszcak’s poster for a reissue of Alexander Korda’s classic historical film The Private Life of Henry VIII (1933). Again, the style is bold and colourful, with Henry is depicted as a comic yet tragic Tudor king. Note that he is seen holding a baby, a detail which mocks his relentless pursuit for a male heir. 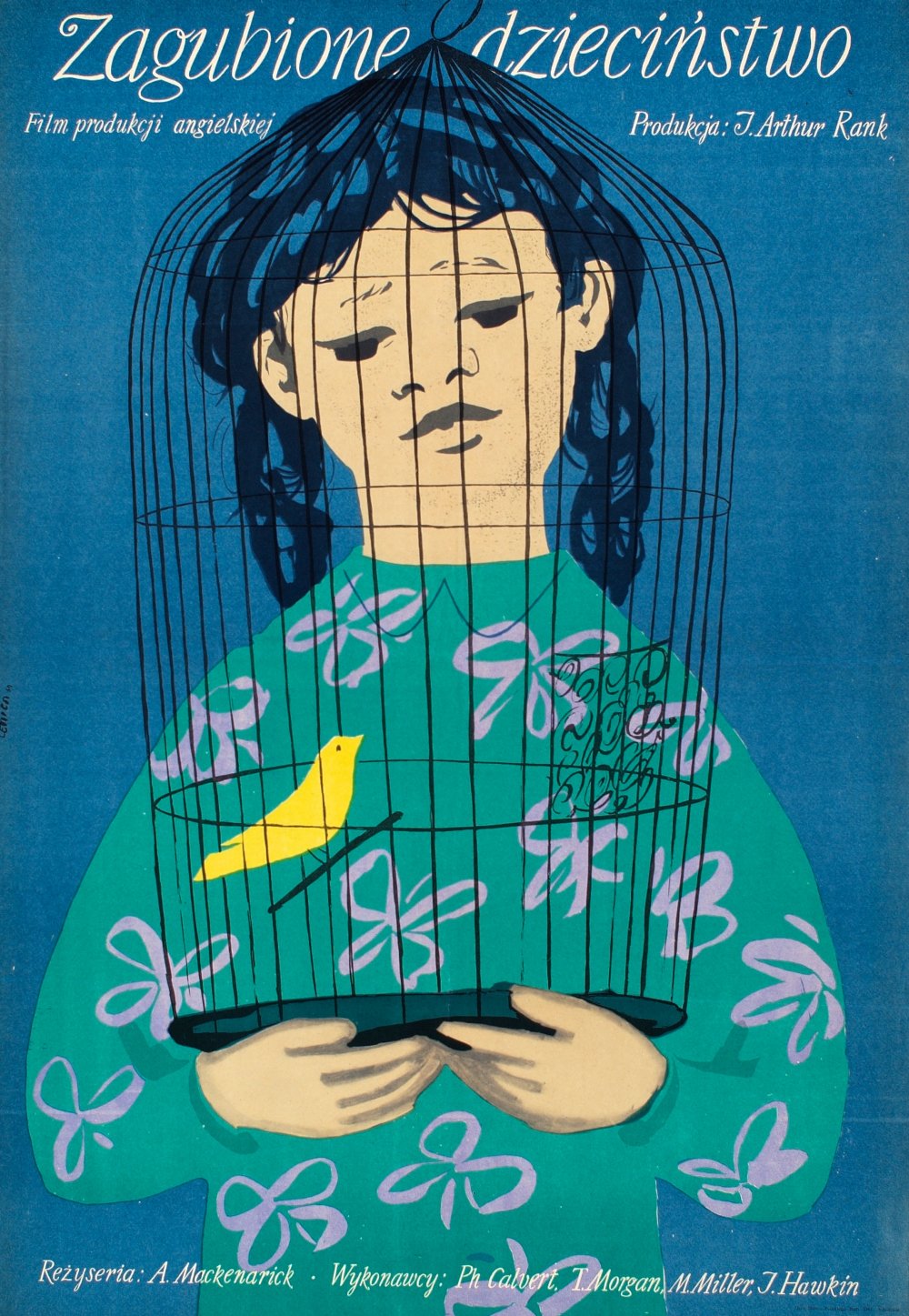 Alexander Mackendrick’s 1952 film Mandy is a realistic, black-and-white social drama about the life of a girl with learning difficulties (played by Mandy Miller). However, in his poster for the Polish release, Jan Lenica’s poster explores a colourful motif of a sad-looking girl staring at a caged yellow canary and longing to be able to sing like a bird. The colours blue and yellow help to heighten that feeling of desire: a desire to be free and the desire to sing. This is also perhaps a witty comment by the artist to convey the predicament of the Polish people, who were under state control throughout the 1950s. 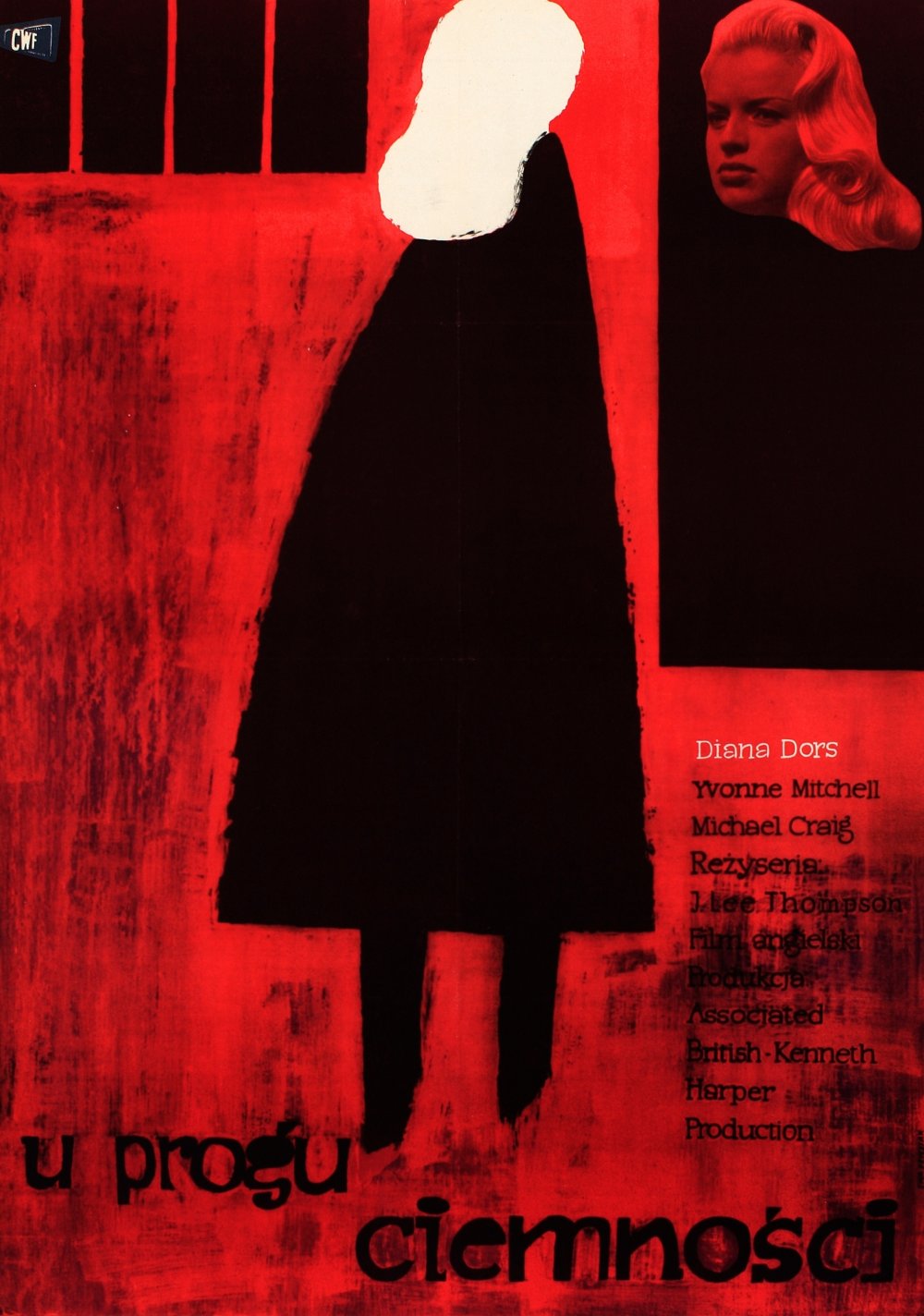 Poster for Yield to the Night (1956) by Ewa Frysztak
Credit: BFI Special Collections

In 1956, J. Lee Thompson made a gritty drama based on the tragic life of Ruth Ellis, the last woman to face the death penalty in Britain. Yield to the Night (1956) was alternatively titled The Blonde Sinner, which becomes a key visual motif through the eyes of poster artist Ewa Frysztak. In the main section of the poster, we see an abstracted image of Ruth in a prison cell, whereas in a panel on the right-hand side we see a mirror image of actor Diana Dors’ face as if she is floating and staring into a dark space. 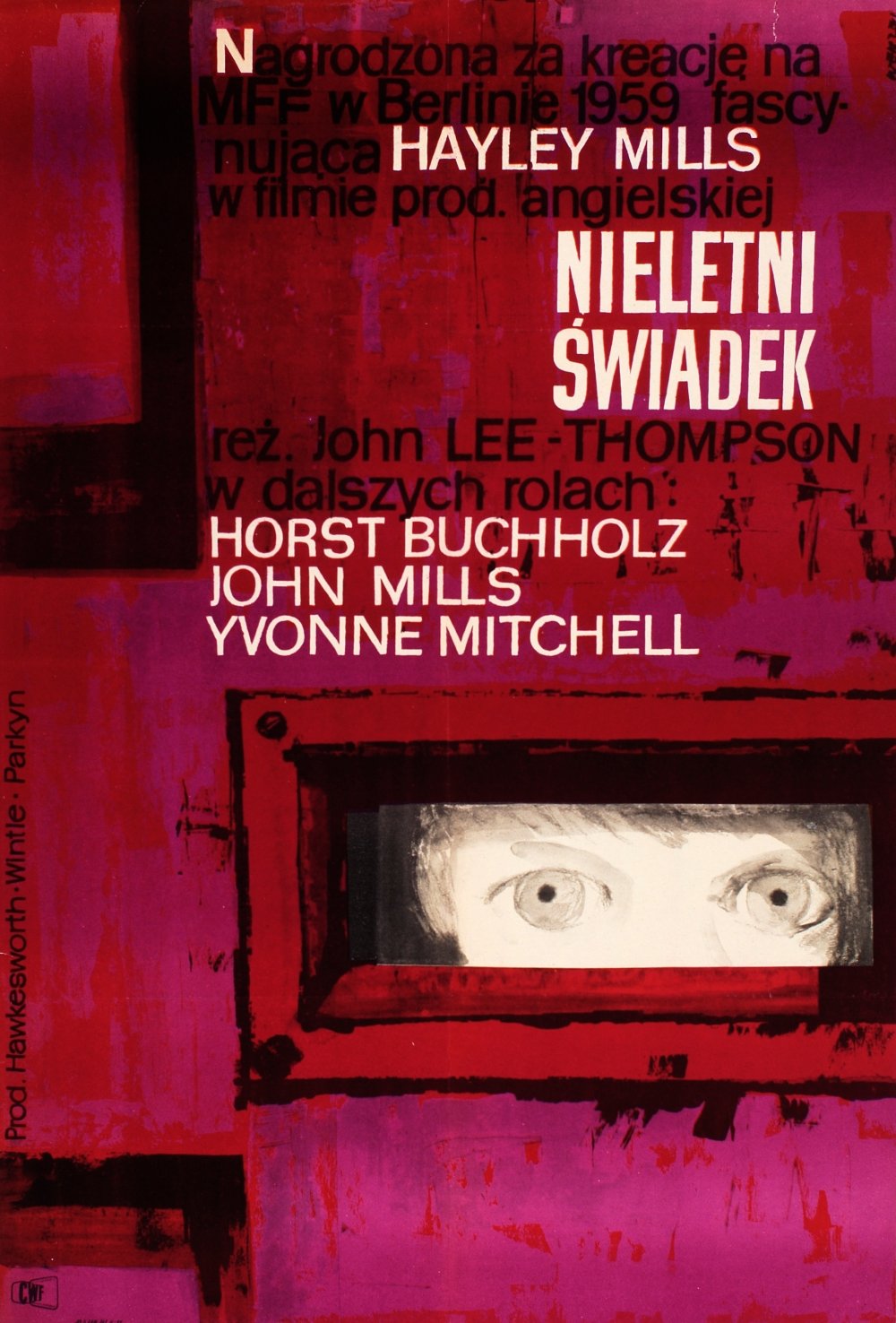 Equally intriguing is the poster for Tiger Bay (1959) by Wojciech Wenzel. In the film, Gillie Evans (Hayley Mills) witnesses a murder. The poster is a more literal interpretation of the film but one can see that the Polish school was beginning to be influenced by graphic art and the use of block typeface. A rectangular slit in the middle of the poster with a pair of big eyes peering back is immediately arresting. The poster is again a comment on incarceration, as if the young girl wants to see the real world rather than the confines of her own reality.

By the 1960s the Polish School of Posters had become fully international, with many artists living abroad including Jan Lenica and Roman Roman Cieślewicz. They contributed to poster biennales, attended conferences and became fully aware of the west’s new emerging styles, with pop art in particular having a profound influence on the many artists who were attempting to gain wider recognition. 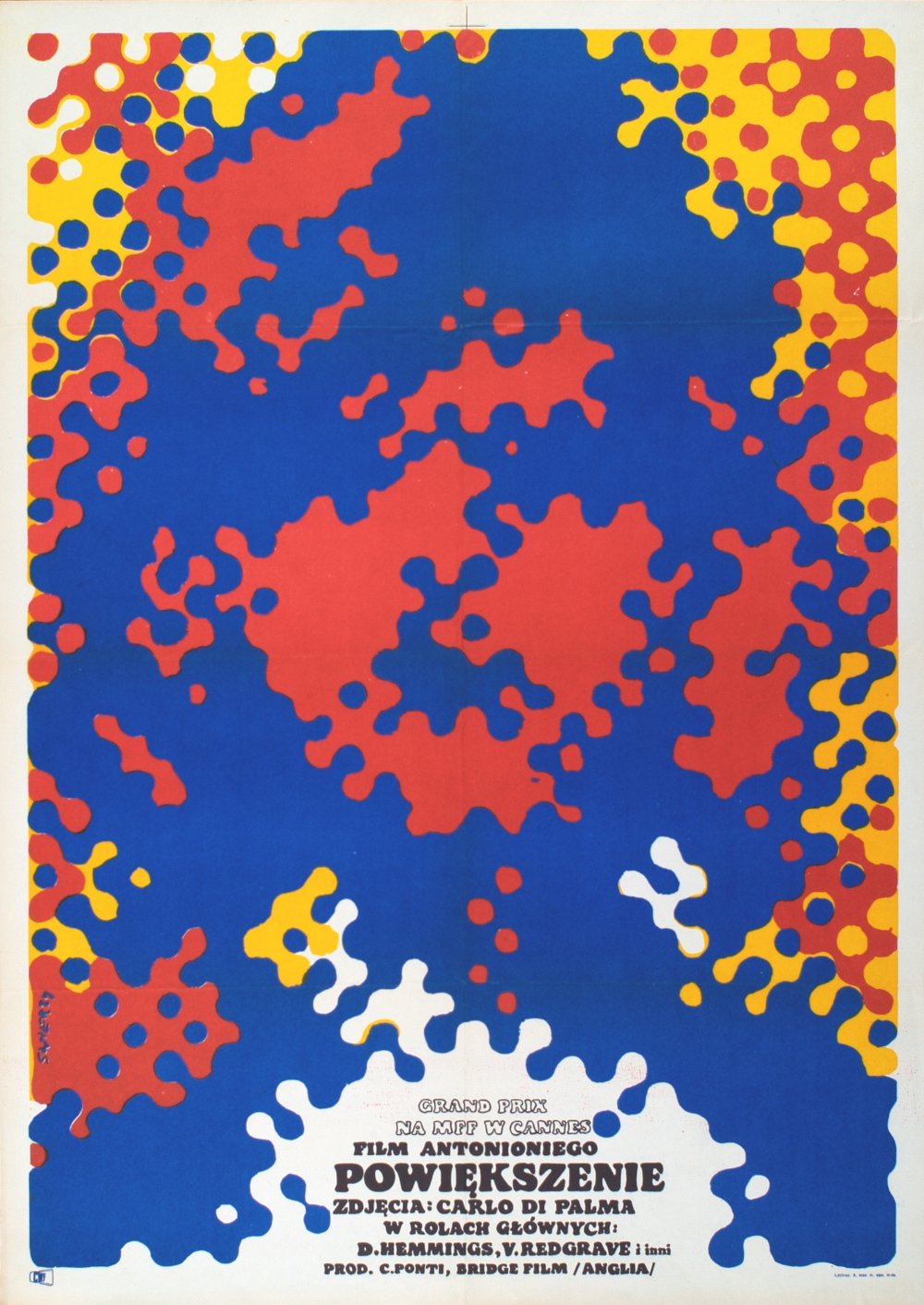 Waldemar Świerzy created his own conceptual style, with a great deal of his work devoted to portraiture and the deconstruction of the human image. In his 1967 poster for Blowup, the face vanishes into abstraction, with a bold counterpoint of red, blue and yellow. It’s a vivid visual rendering that bears comparison with the work of artists such as Victor Vasarely, Bridget Riley or Peter Sedgley, while consciously acknowledging Andy Warhol’s screen prints of 20th century icons and the work of American pop artist Roy Lichtenstein. 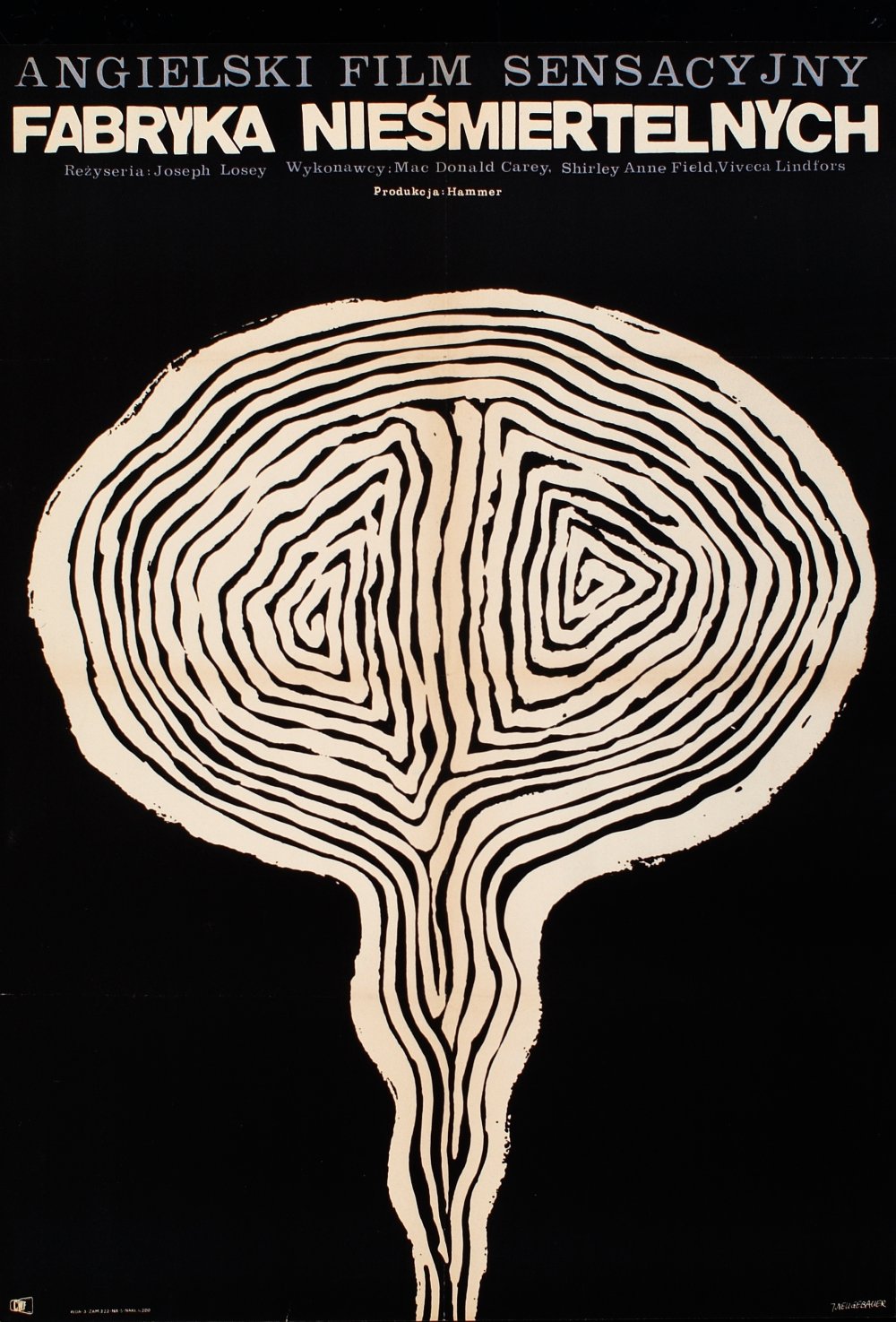 Equally fascinating is Jacek Neugebauer’s poster for Joseph Losey’s The Damned (1961, released in Poland in 1967). The abstract poster reflects the mood and tone of the disturbing opening sequence to the film, in which Arthur Grant’s camera pans across the rocky Dorset coastline and reveals what appear to be charred bodies. Are we witnessing scenes after a disaster or a post-apocalyptic landscape? 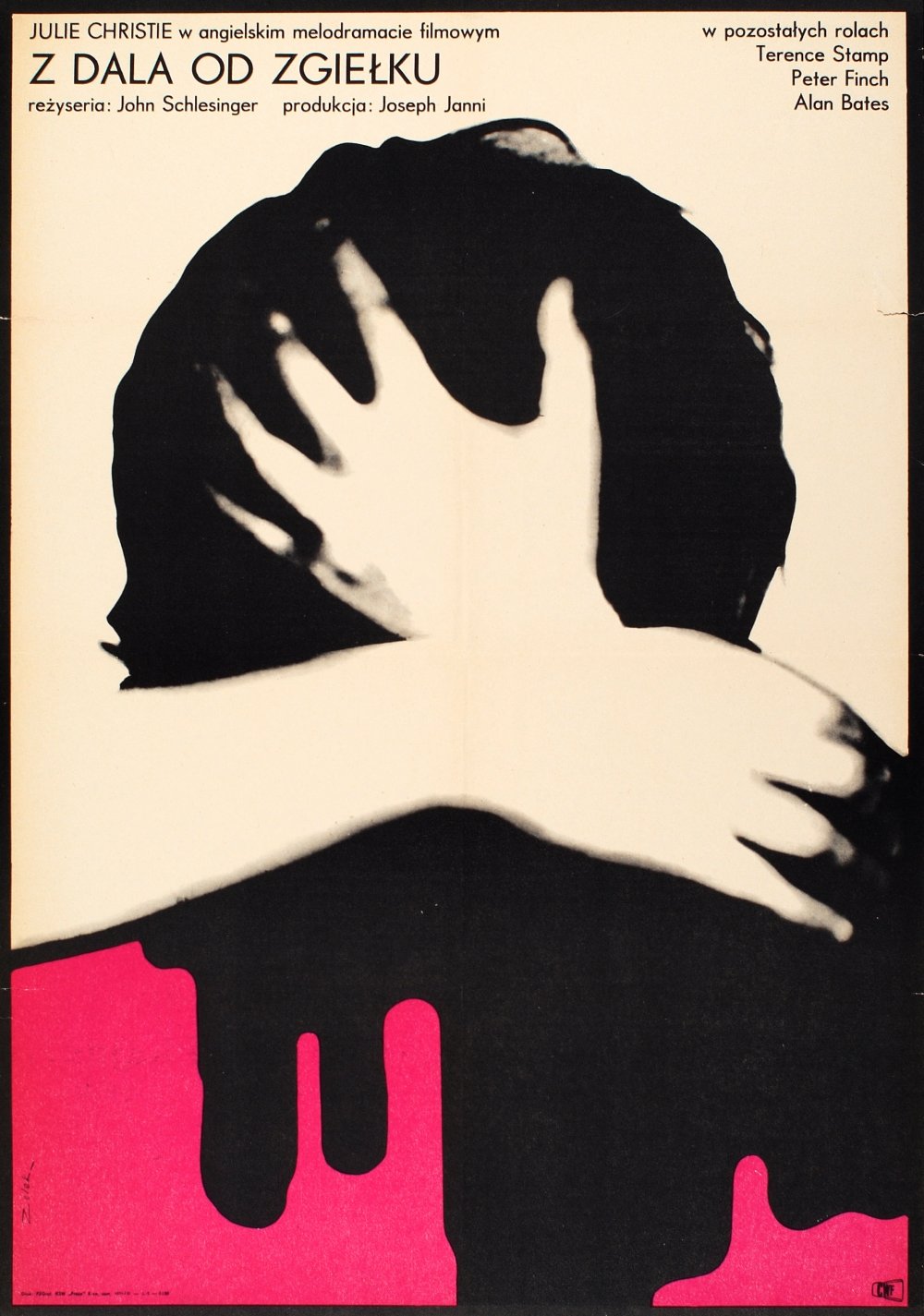 In 1970, British cinema reached a watershed with the release of Nicolas Roeg and Donald Cammell’s Performance (1970), starring Mick Jagger and featuring a heady mix of sex and violence. But with the delay to releases, Poland was catching up with one of Nicolas Roeg’s finest achievements as cinematographer: the 1967 version of Far from the Madding Crowd. The poster by Bronisław Zelek depicts the plight of Bathsheba (Julie Christie), who is forced to choose between three men: Sergeant Frank Troy (Terence Stamp), Gabriel Oak (Alan Bates) and William Boldwood (Peter Finch). The poster disguises the face of the suitor depicted, but the blood running down the back of his shoulder suggests a tragic end. 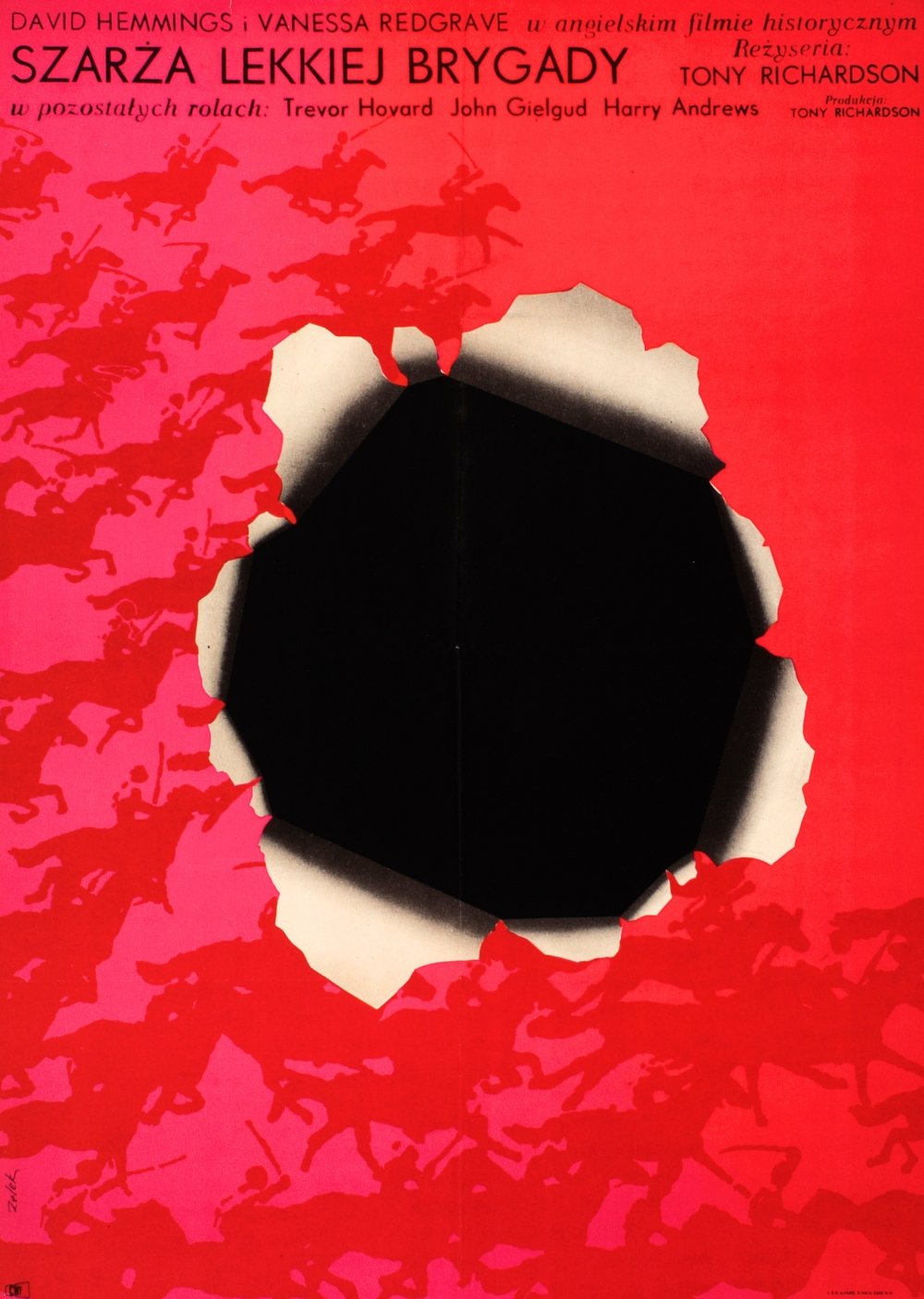 Poster for The Charge of the Light Brigade (1968) by Bronisław Zelek
Credit: BFI Special Collections 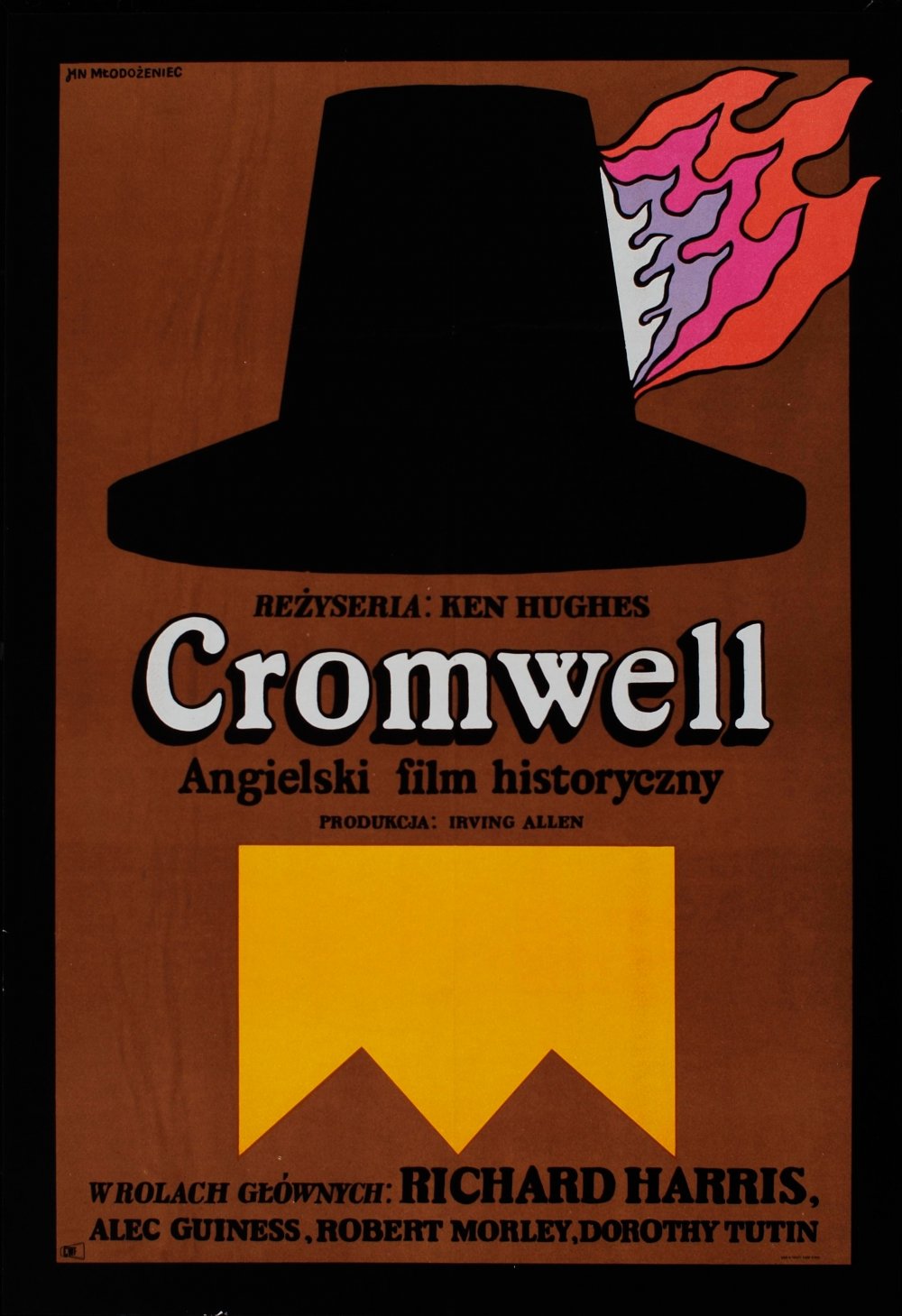 Our collection includes posters for several historical dramas that were released in Poland between 1971 and 1973. The mini-wave reflects a trend in how British cinema began to project itself during a period of continued social change and upheaval, particularly given the deployment of troops in Northern Ireland that began in August 1969. 1968’s The Charge of the Light Brigade (released in Poland in 1972) and 1970’s Cromwell (released in Poland in 1971) suggested a Britain looking back on its military campaigns of the past. 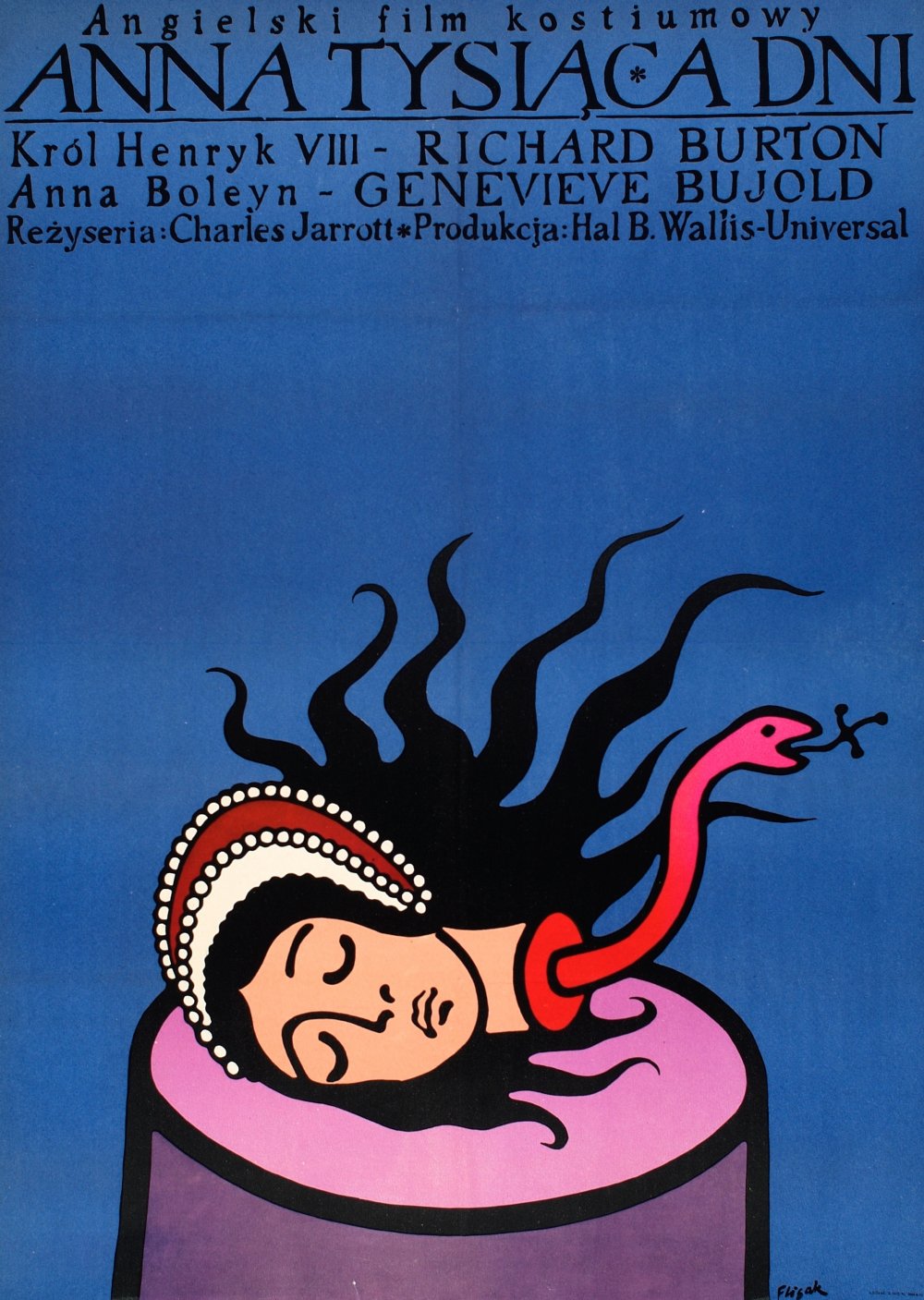 With thanks to Ewa Reeves. For more information on Polish posters see 77 Posters/77 Plakatow by Ewa Reeves and Nigel Arthur (published 2010).

Then there is Jerzy Flisak’s poster for the Tudor drama Anne of the Thousand Days (1969), which was released in Poland in 1972. Anne Boleyn’s severed head has one of Satan’s snakes writhing on the block, which adds to the dramatic but playful depiction of Anne, who even in death seems to be resolute in her loyalty to the king.

The Polish sense of humour comes through in these three historical film posters that gently mock Britain’s imperial past, its failed campaigns and its need to feel that it has a position of authority in the world.