Panic on the streets of London: filming The Day the Earth Caught Fire

An all-time great London film, The Day the Earth Caught Fire sets the stage for the end of the world in real-life locations around the capital.

While his film may have concerned nuclear testing knocking the Earth off its axis and causing the planet’s climate zones to become displaced (cue tropical storms in London and the River Thames drying up), director Val Guest was nevertheless determined to present The Day the Earth Caught Fire (1961) in as realistic a style as possible. “I tried very hard to make it as ‘documentary’ as possible. I wanted it to be so authentic”, he later declared.

From the contemporary critical reception Guest was apparently successful in this. But what was it about the film that appeared to make it so realistic and authentic? Well, one was the perceived sense of journalistic authenticity that Guest generated in those scenes set within the offices of the Daily Express, not only through a combination of cracking dialogue and believable characters, but through the recreation at Shepperton Studios of the Express offices in precise detail. The other key factor was Guest’s extensive use of London locations, and it’s these that will be examined here.

A news crew films a demonstration in Trafalgar Square

As the film’s central characters are journalists on a national newspaper, a natural, and somewhat inevitable, choice for location shooting was Fleet Street, the one-time nerve centre of Britain’s newspaper industry. But filming on the street was to cause Guest major logistical headaches. All relevant scenes were to be staged outside the famous art deco Express building (extant but vacated by that newspaper in 1989), but, as the majority of these scenes were to be set in that period where London is near deserted owing to the heat, it was imperative that the street was devoid of traffic and pedestrians. While the police were willing to help by offering to close the street, their offer of assistance came with a catch – they would only close it for two to three minutes at a time. Scenes therefore had to be rehearsed and shot with military precision. 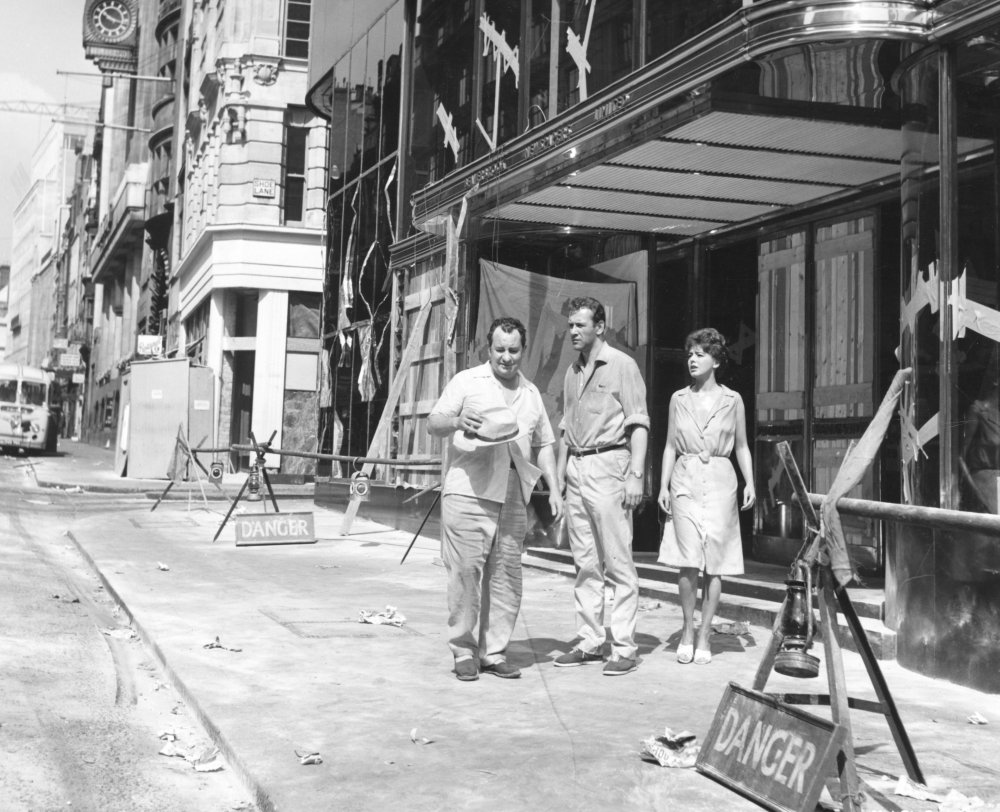 Outside the Daily Express office on Fleet Street

Being journalists, the main characters naturally like a drink or two, and the favoured watering hole is Harry’s Bar, located in the film in St Bride’s Avenue, a side street running alongside St Bride’s Church, diagonally opposite the Express offices. But whether the bar actually existed is open to question. It is certainly not there now. The doorway that actors Leo McKern and Edward Judd can be seen exiting from no longer exists; in fact that part of the avenue where the bar was seemingly located is now simply a brick wall covered in tiling. Guest has stated that the shooting of the bar interiors did take place within the actual establishment, so it may well have been a genuine bar, although the scenes in question do strike one as having more of a studio look about them. The puzzle remains, as yet, unsolved!

Another primary location was Battersea Park on the south bank of the Thames. The park’s funfair (used extensively in the film) had opened in 1951 as part of the Festival of Britain but was to close in 1974, leaving the footage in the film, showing a variety of the rides that were a popular feature of the fair, as a valuable visual record of what was once a major London attraction.

Although the film was shot between mid-May and mid-July 1961, and the sun appears to be shining, the scene of people sunbathing in the park was actually shot on a particularly cold day; the cast were shivering, not sweating. No doubt to the cast’s relief, this sunbathing is brought to a sudden halt by the arrival of an impenetrable heat mist that rapidly envelops London, the shooting of which necessitated the employment of a battery of fog machines strategically positioned around the park in order to fill it, or at least part of it, with a copious amount of fake mist.

Guest also requisitioned Trafalgar Square in order to stage an anti-bomb demonstration. Footage of a genuine demonstration by the Campaign for Nuclear Disarmament (CND) had already been shot in April 1961, before filming of the feature itself had actually begun, but a smaller demonstration, with Judd now in attendance, was staged for the benefit of the film in June, providing material that could be intercut with the previously shot actuality footage. 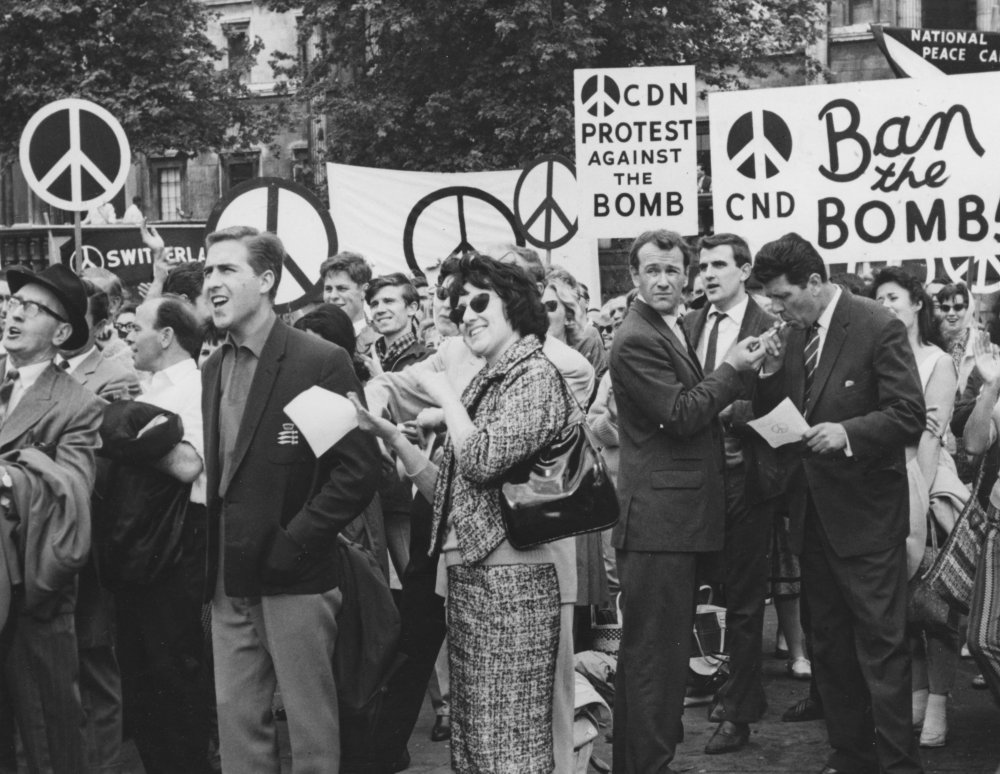 The CND demonstration in Trafalgar Square

Other London locations used for more minor scenes include the Board of Trade building (now housing the Ministry of Defence) in Horse Guards Avenue, standing in for the Meteorological Office (Judd is shown on the main entrance steps and in the foyer); Chelsea Bridge (Judd walks past people queuing for water); St Paul’s Cathedral (shots of people praying on the steps and of a soapbox orator); BBC Broadcasting House in Portland Place (a group of people listening to a broadcast by the Prime Minister); fleeting shots during a firestorm montage of Hampstead Heath tube station, Richmond Park and Epping Forest; and possibly Downing Street, as Guest has stated that the brief scene of a public demonstration here (the street was open to the public until railings were erected in 1982) was shot on location, although it may actually be a studio set.

Whether for time or logistical reasons, or a combination of both, studio sets were indeed used in some scenes that featured other London locations. The footage of people queuing for water in Hyde Park, for example, was achieved entirely in the studio, with extras standing in front of a large photographic backdrop. Genuine footage of a parched Parliament Square appears during the opening credits, but a later shot of people listening to the prime minister’s broadcast in the square was also achieved using a large photographic backdrop.

The shots of Piccadilly Circus, whether showing groups of people or a lone police car moving through it, were achieved, not by photographic backdrops this time, but via matte shots filmed in the studio. And while Fleet Street, as referenced earlier, may have been extensively used as a location, the shots of Judd walking down the centre of the street that appear at the beginning and end of the film were also studio matte shots.

But whether filmed in the studio or on location, this does not detract from that fact that, as well as producing one of the most accomplished of all British science fiction films, Val Guest also managed to make one of the great London films.

Related to Panic on the streets of London: filming The Day the Earth Caught Fire