The only way is Wessex: the making of Far from the Madding Crowd

Far from the mod ‘in’ crowd – the story of swinging 60s stars Julie Christie and Terence Stamp decamping to Dorset in 1967 for an adaptation of one of Thomas Hardy’s greatest novels. 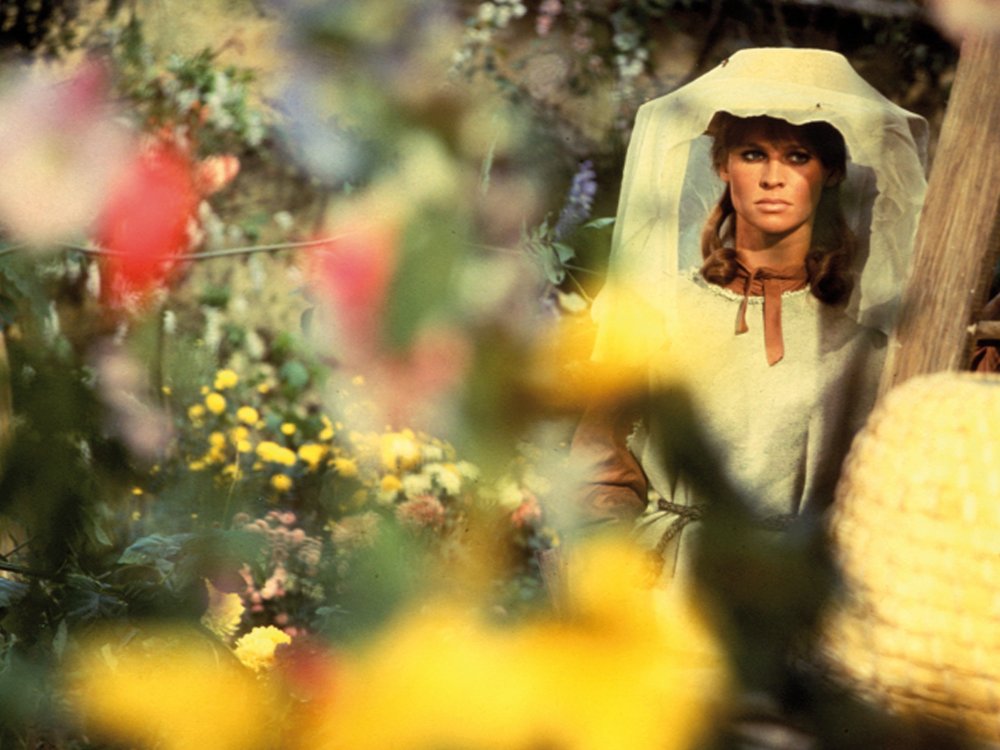 There was great surprise when the Oscar-winning creative team behind Darling (1965) – the hip film depiction of swinging 60s London, announced their next project was to be Thomas Hardy’s Far from the Madding Crowd. But the dynamic trio of director John Schlesinger, producer Joseph Janni and screenwriter Frederic Raphael were serious in their intent to bring the complex tale of love and loss in 1860s Dorset to the big screen. Mini skirts, fast cars and discotheques were replaced with buttoned up corsetry, horse-drawn wagons and harvest barn dances. Asked what had prompted him to ‘go Victorian’, Schlesinger declared: “I wanted to get away from a contemporary subject. People are tiring of the flip side. Contemporary is dated.”

The archives of Schlesinger and his continuity supervisor Ann Skinner, held in the BFI’s , offer up a wealth of original production material, including annotated scripts, storyboarding and continuity photographs, which tell the fascinating story of the making of the film. 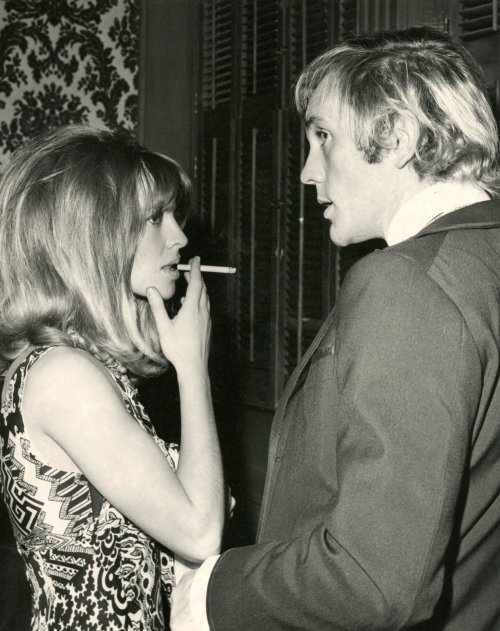 Julie Christie plays the wilful, impulsive and beautiful Bathsheba Everdene, unexpected heiress to a large farm. She deals simultaneously with the unwanted affections of shepherd Gabriel Oak (Alan Bates) and wealthy landowner Mr Boldwood (Peter Finch), while also coming to terms with her new wealth and status. Events are further complicated when she falls into a disastrous marriage with caddish Sergeant Troy (Terence Stamp), a man in love with Bathsheba’s fortune, but haunted by his ‘true wife’, servant Fanny Robin, who dies giving birth to his child.

The casting of Christie, Oscar-winning star of Darling and epitome of 1960s pale-lipped, bee-hived beauty, as rosy-cheeked temptress Bathsheba, caused much controversy. With cool and trendy Stamp, as roguish Frank Troy, it was a pairing made in publicists’ heaven. However, their modernity and ‘of the moment’ celebrity, worked against them, as the majority of the critics simply couldn’t believe in their Victorian counterparts. As one critic remarked: “Here we have the ultra-mod talents of Christie floundering in period psychology. The Now wasted on the Then.” 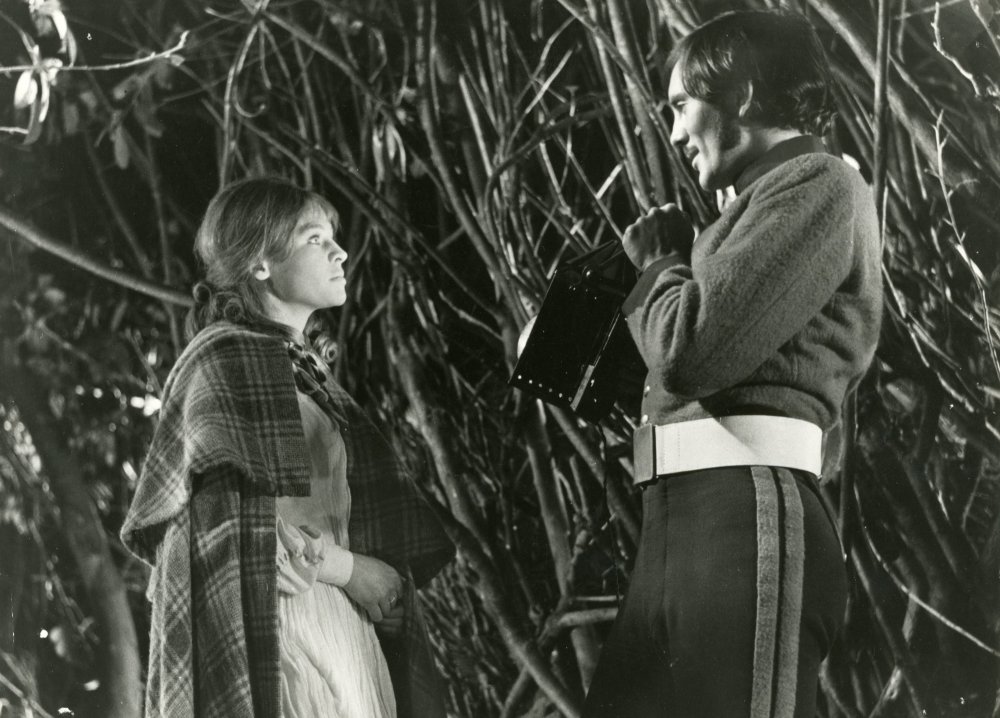 Schlesinger, however, seemed extremely happy with his cast. In a letter to American producer Jerome Hellman he expresses admiration for Finch, Bates and Stamp but admits slender-framed Christie is not quite the image of Hardy’s buxom wench. 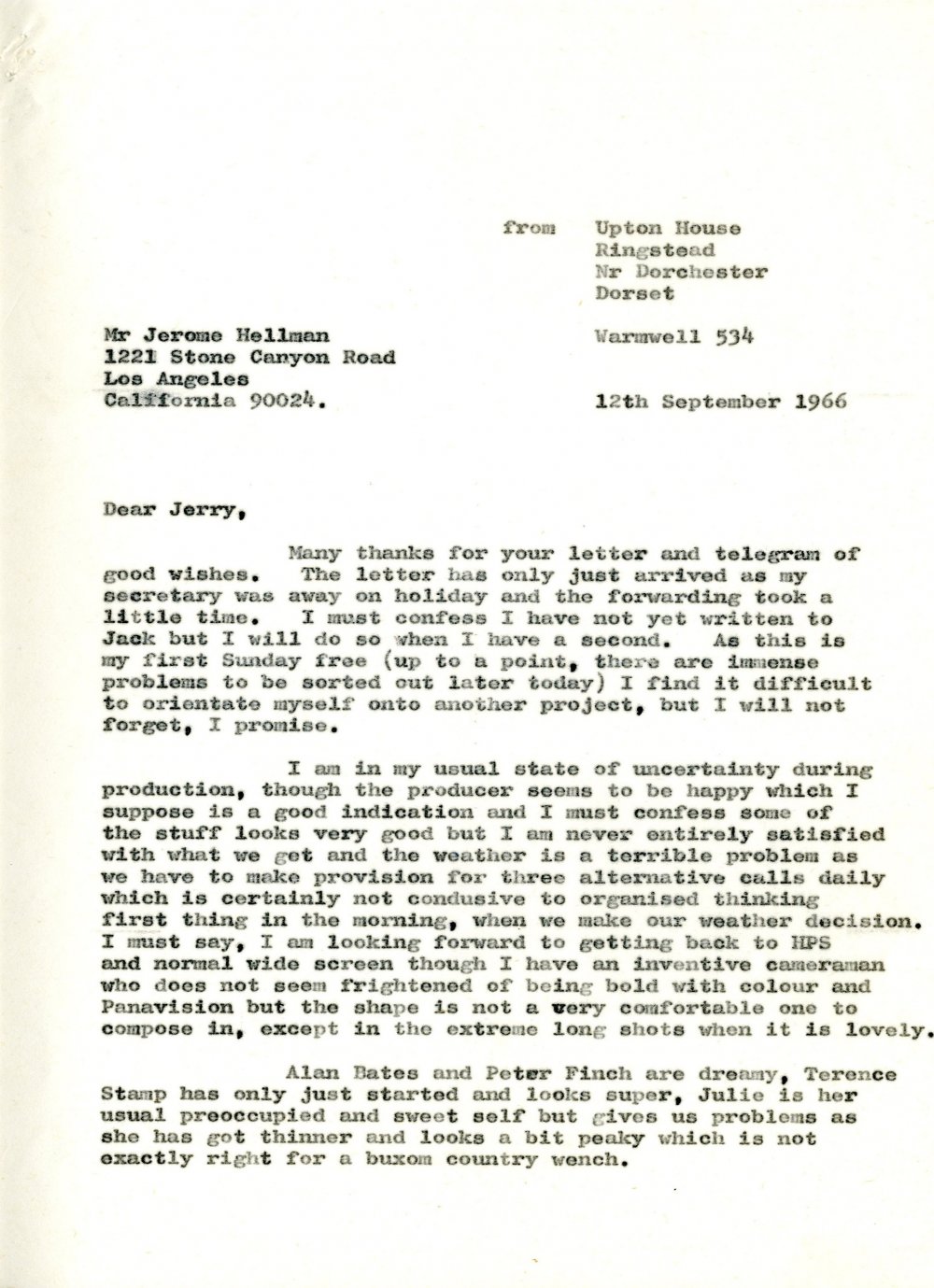 But below the headline focus on its main stars, there was unanimous admiration for the film’s wonderful look, painstakingly shot almost entirely on location over a seven-month period in Wiltshire and Dorset.

Schlesinger was determined from the outset to place his actors in the most breathtaking landscape – bleak grassy uplands, wind-swept valleys and a rugged sea shore were created in Panavision and a tawny Metrocolor. Director of photography Nicolas Roeg used a painterly eye with exaggerated long shots establishing actors as tiny dabs on the horizon, as lost specks in crowds or looked down on from vertiginous heights, echoing Hardy’s vision of the smallness of mankind against the universe. 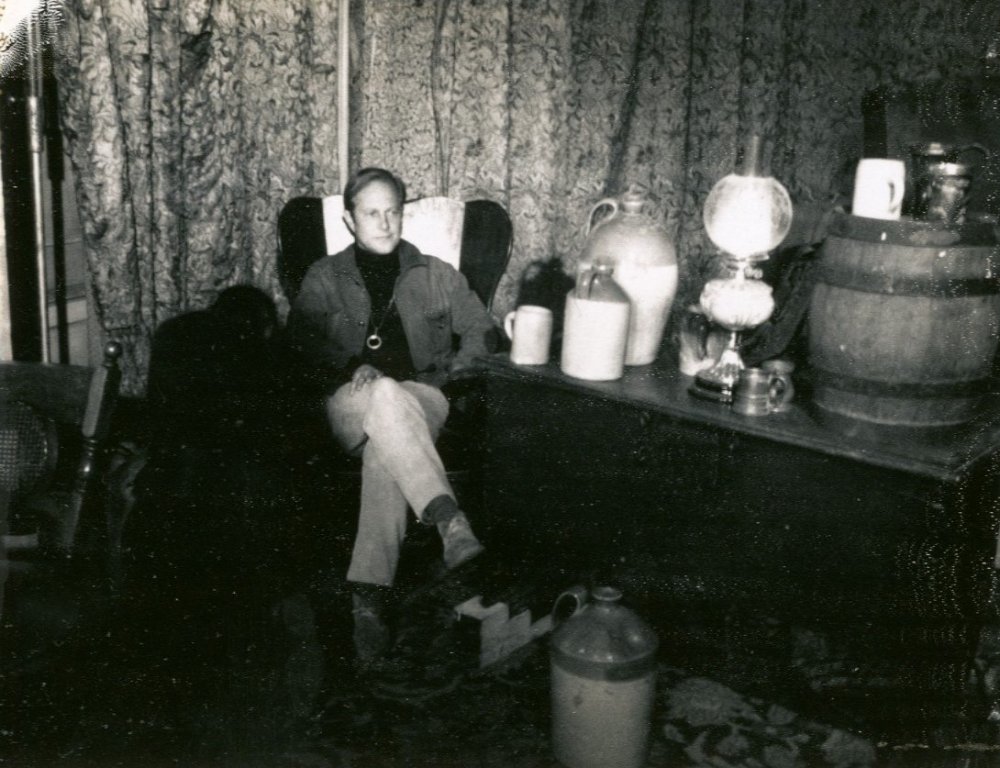 Richard MacDonald’s production design and Alan Barrett’s costume create a muted palette of brown and grey with startling flashes of Sergeant Troy’s red tunic – almost an alien presence, deliberately discordant with its sepia toned background. Christie’s wardrobe is confined to a few simple pieces, mainly in earth tones, though her virginal white lace dress is worn in key scenes throughout the early part of the film. 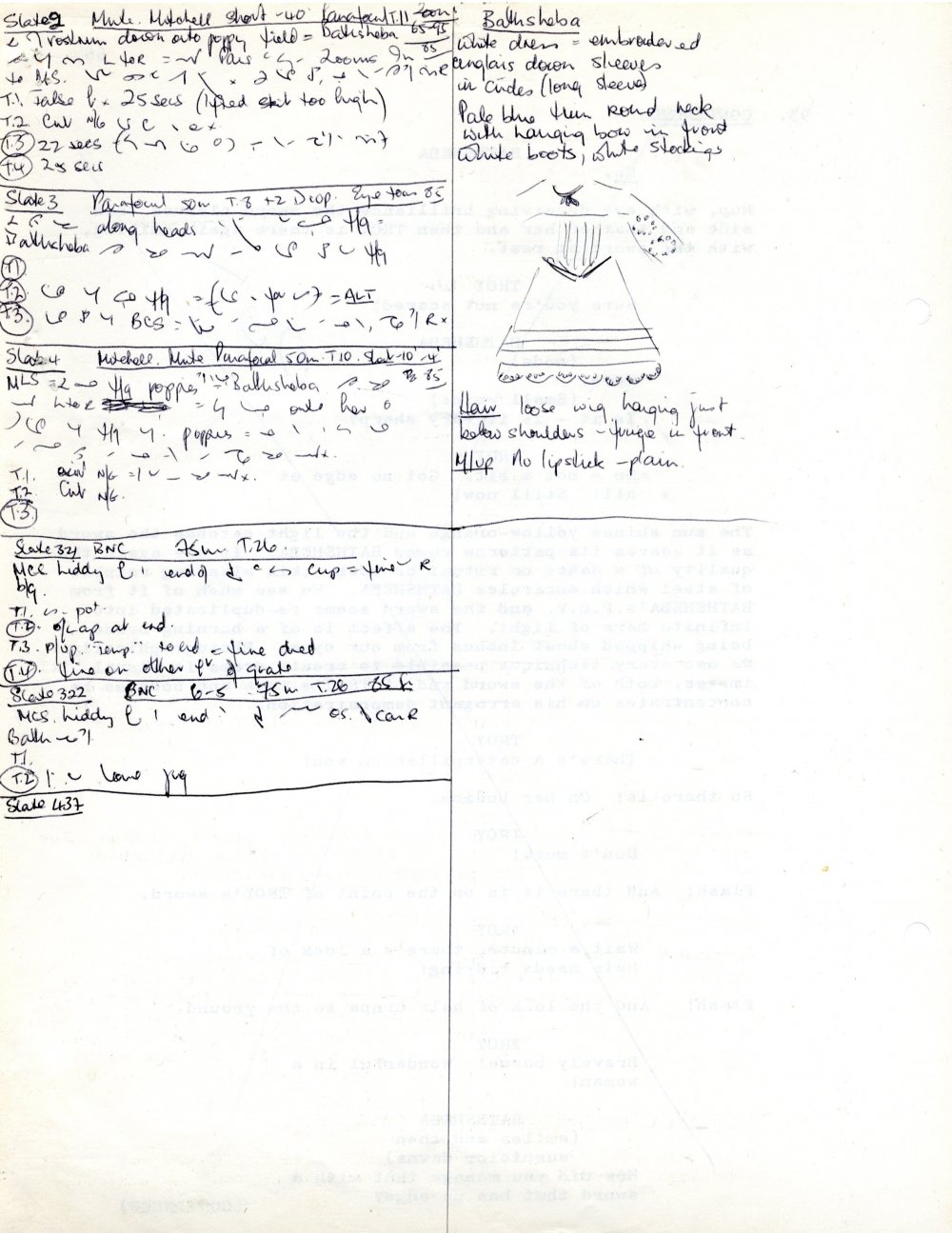 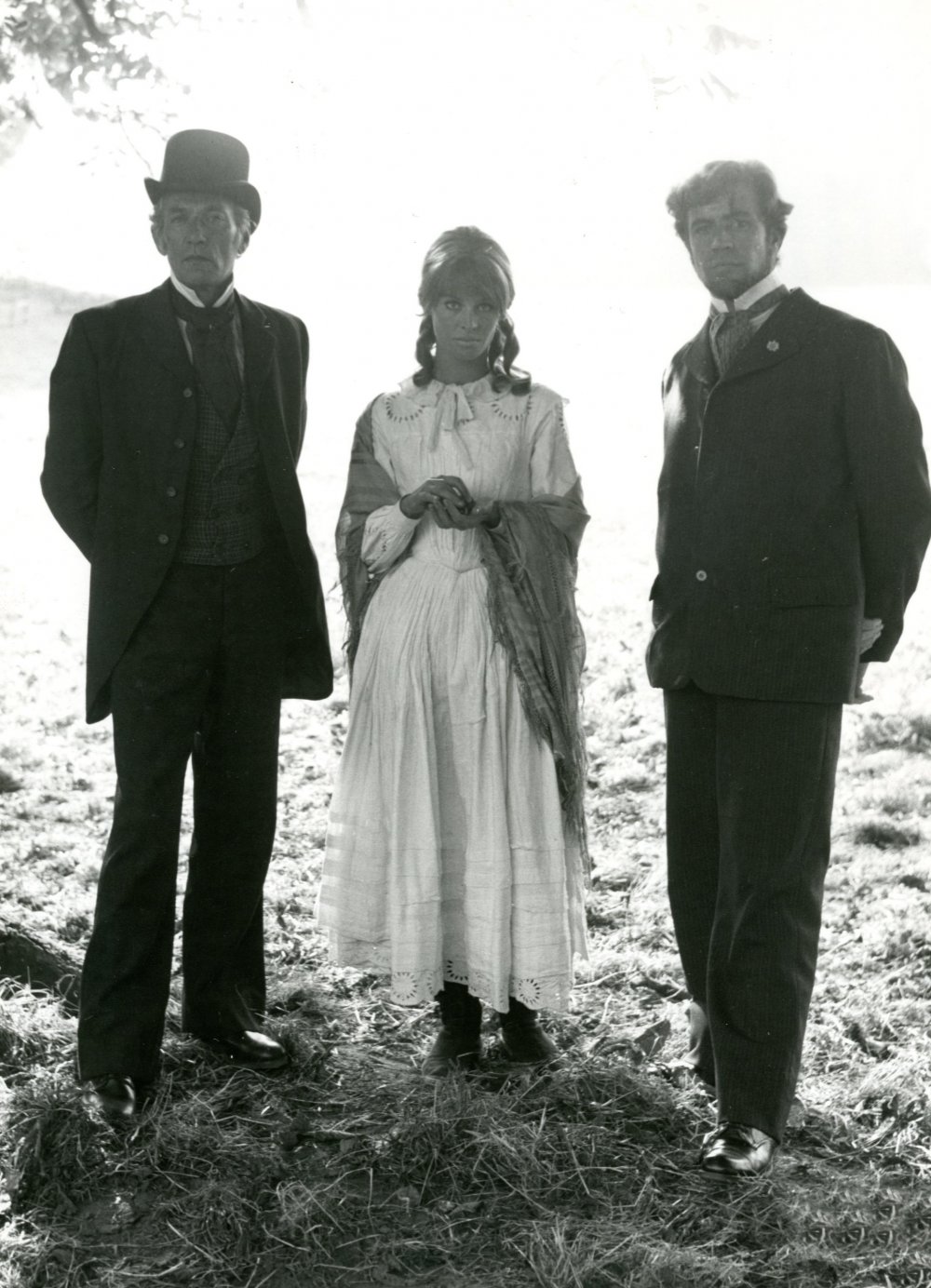 This is no bucolic idyll: characters are shown frequently at the mercy of the environment. Weather is a constant note, with threat of storms ruining crops or tinder-box heat causing fire. The film is driven by the rhythmic change of season, the cycle of country life from sewing of tilled earth, dipping of sheep, making of hay, the bounty of harvest and the coming of snow and freezing hoar frosts. 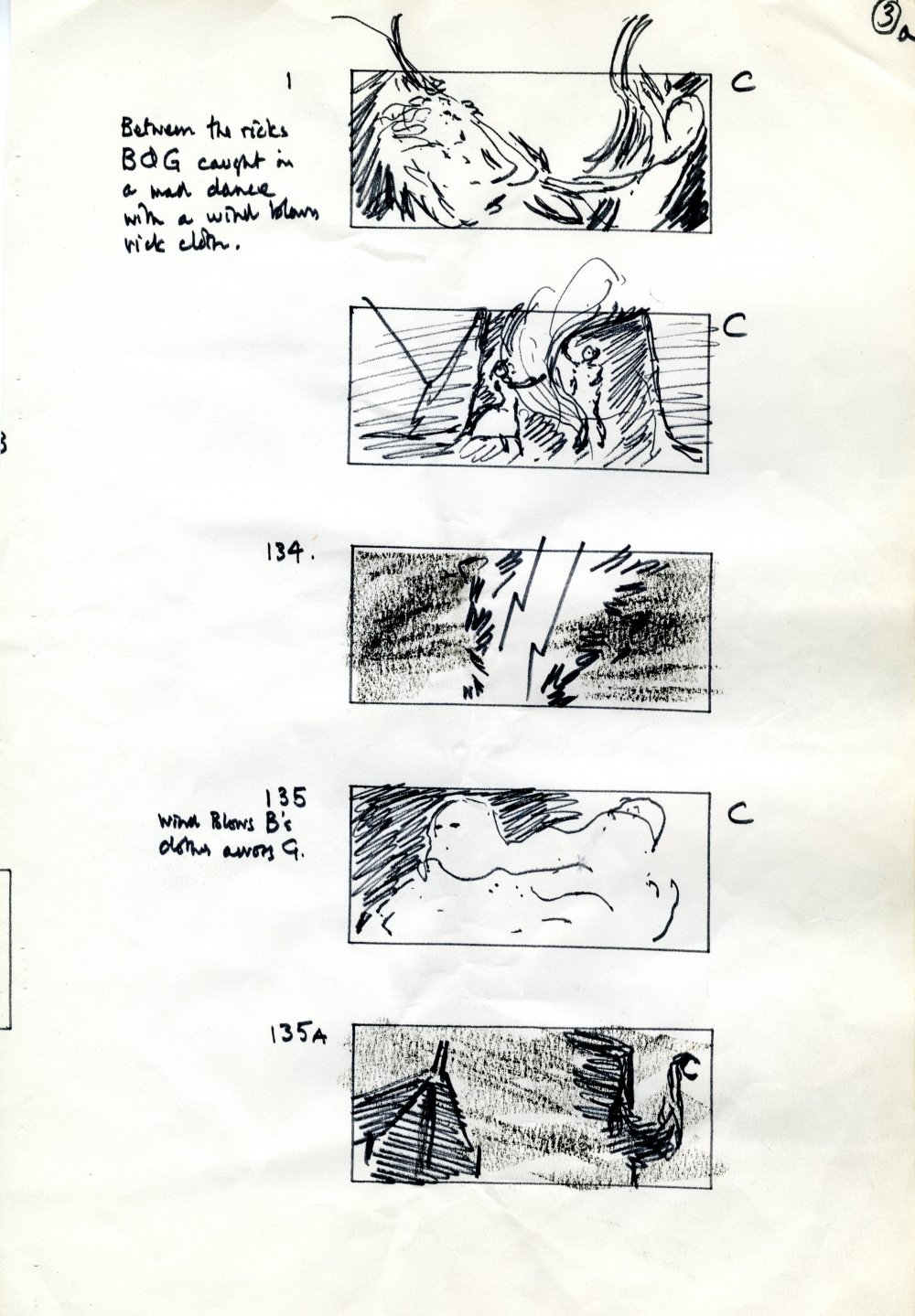 A page of director John Schlesinger’s storyboarding for the sequence where Gabriel Oak and Bathsheba battle with the storm to cover the hay ricks with cloths
Credit: John Schlesinger Collection/BFI Special Collections

Schlesinger was keen to populate his scenes with “real faces and voices” and over 700 local people were recruited as extras. Filming aroused great local interest and press attention and became an important boost to promote Hardy’s ‘Wessex’ as a tourist destination. 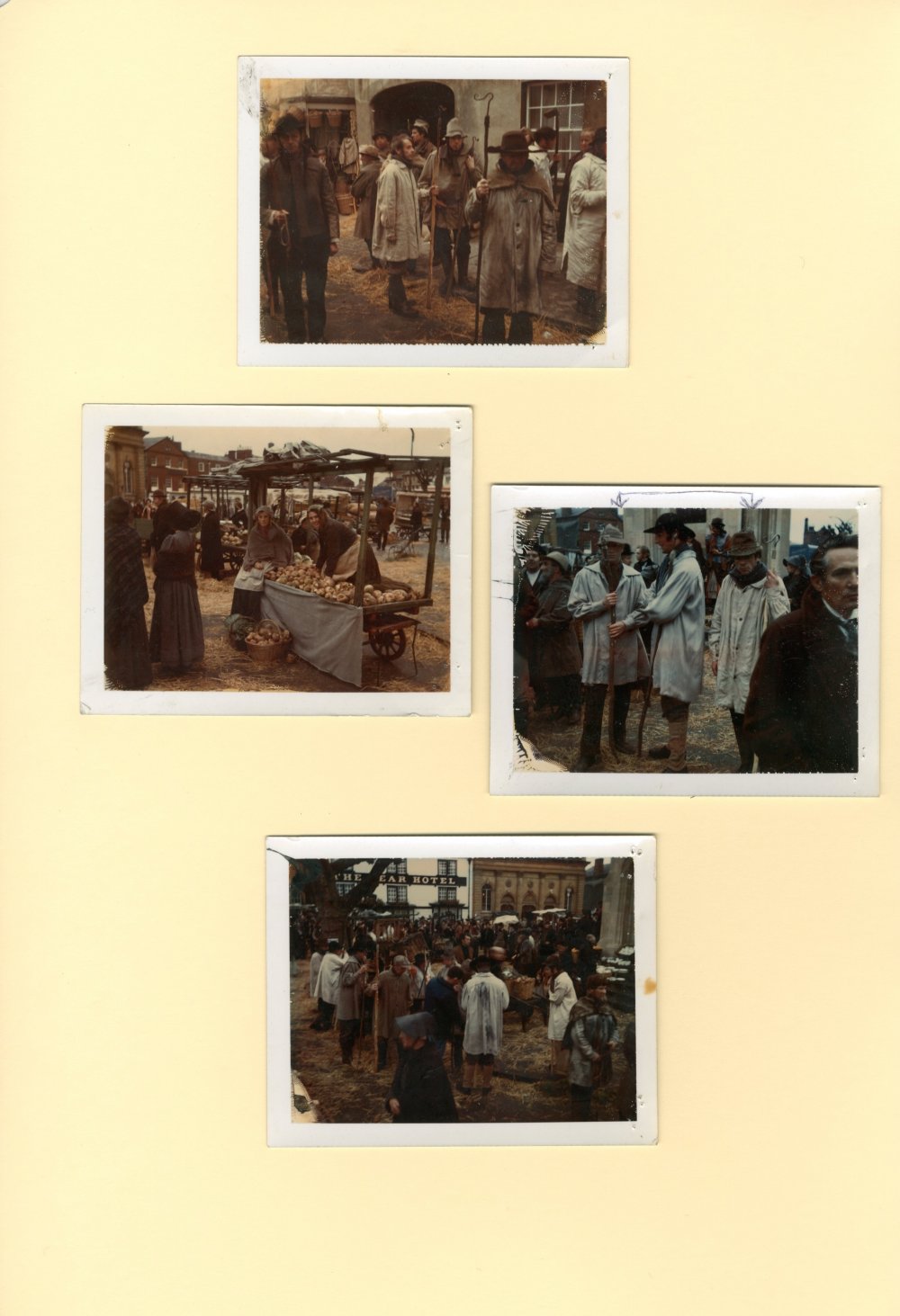 Frederic Raphael’s script is remarkably faithful to the original work, using much of Hardy’s dialogue. He remarked: “We threw away a certain amount of literary stuff, condensing and modifying passages of dialogue.” Schlesinger admitted he had never read the novel before it was first suggested by producer Janni, but once devoured, he and Raphael set about breaking down the chapters into filmable scenes. For example the sequence where Troy, missing believed dead, is found disguised as Dick Turpin in a travelling circus. 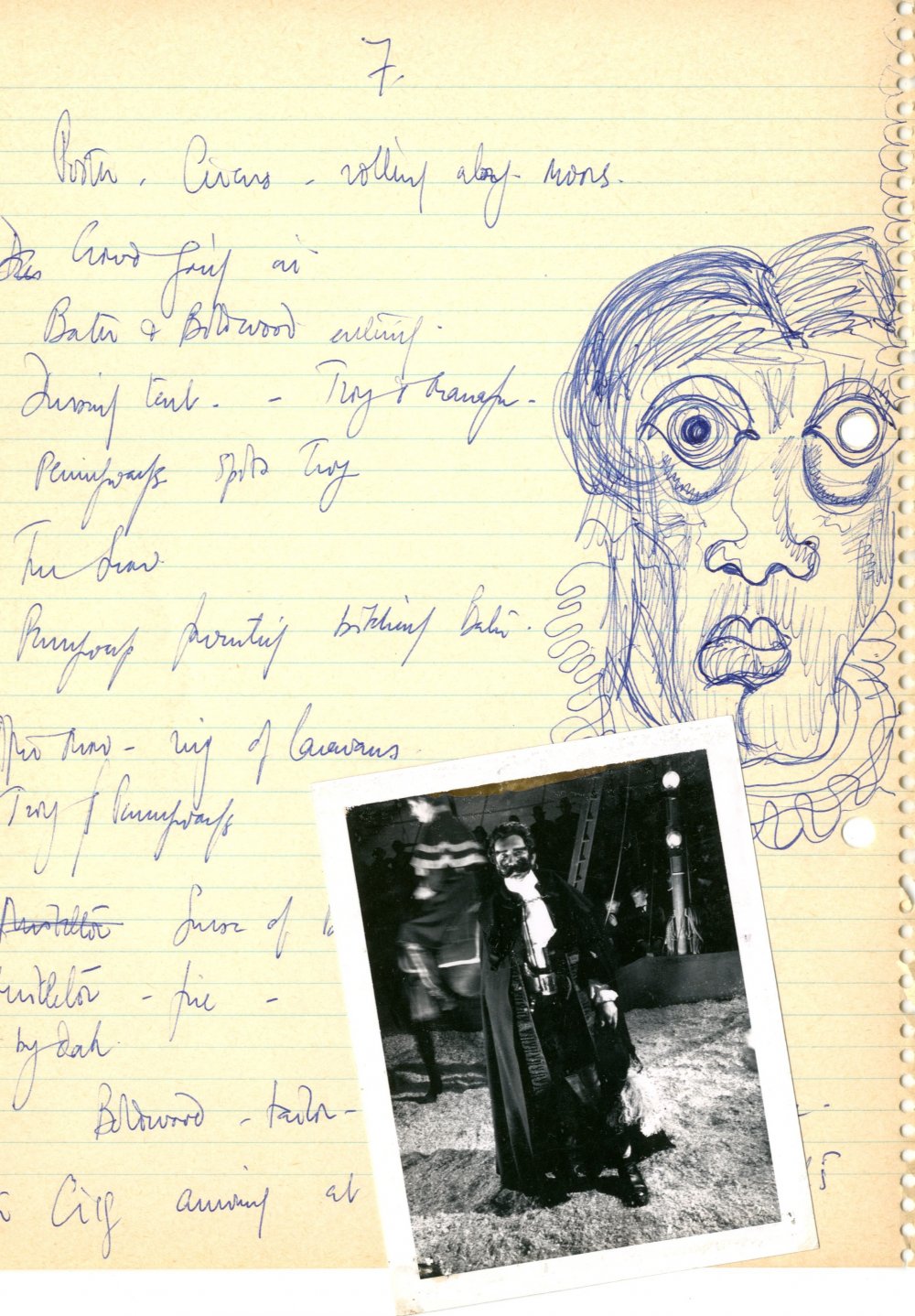 The most famous scene in the film where Troy demonstrates his skill with a sword to the mesmerised Bathsheba underwent several revisions. 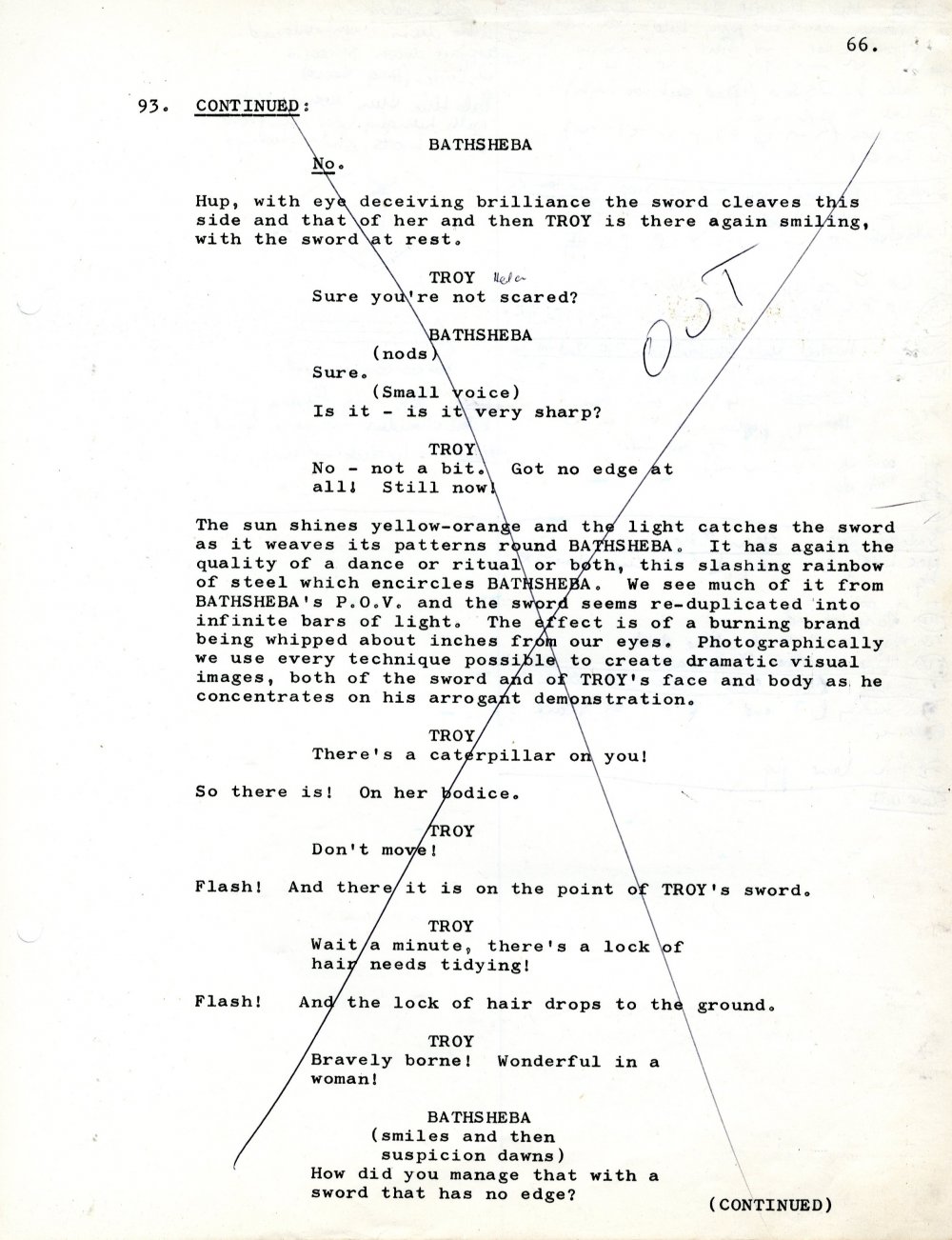 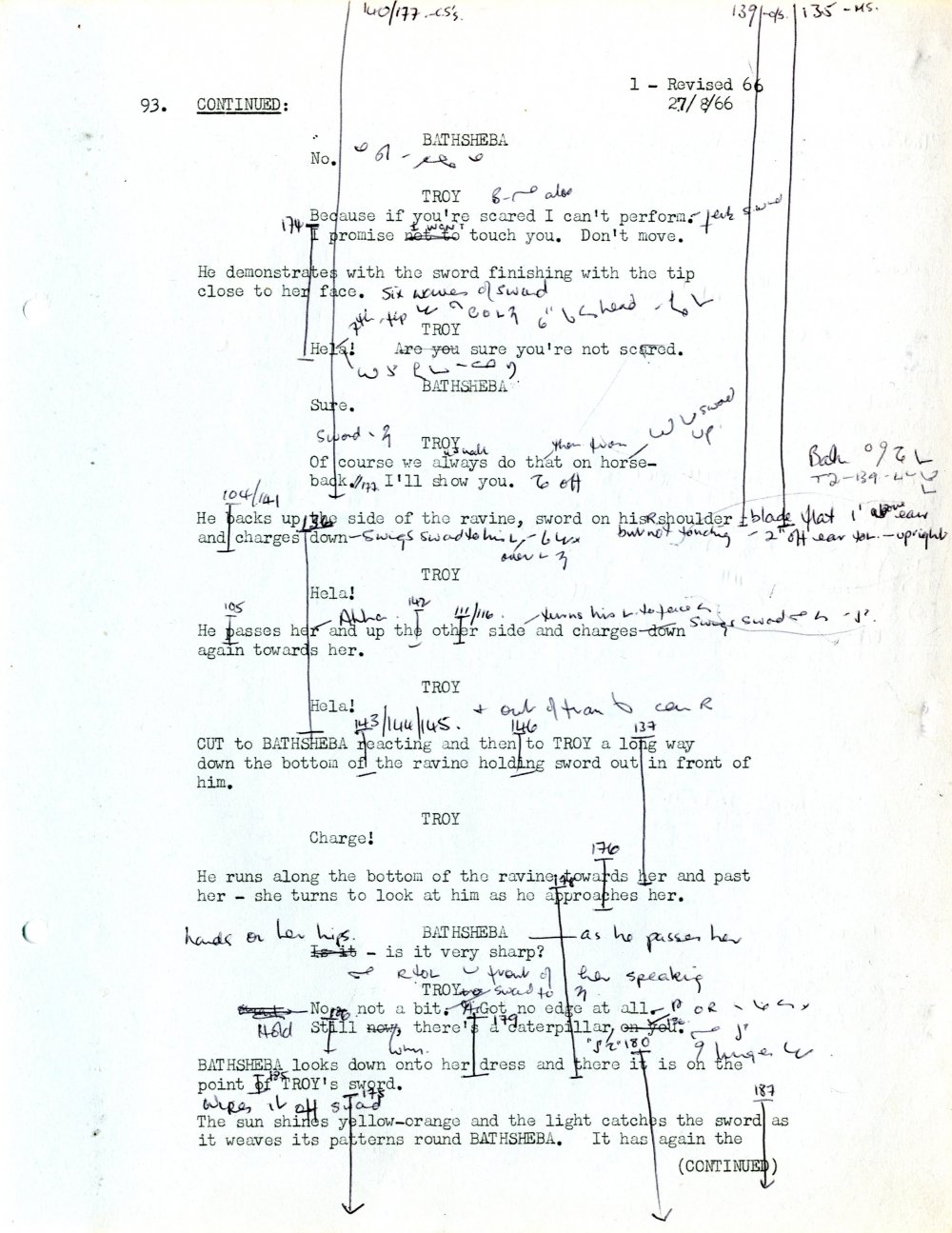 But despite every effort to be concise, the film stubbornly remained far too long. At well over three hours, backers MGM began to worry that even with an intermission, the pace would be too slow and leisurely. Radical pruning became necessary, even scenes considered pivotal had to be sacrificed. The scripts are full of suggested cuts and deleted scenes, for example, a small but revealing sequence where Troy goes in search of Fanny Robin at a sweat shop where she had worked as a seamstress, only to find she has fled. It attempted to explain why Fanny and Troy never meet immediately after their abandoned wedding ceremony and why Troy considers himself free to marry Bathsheba. 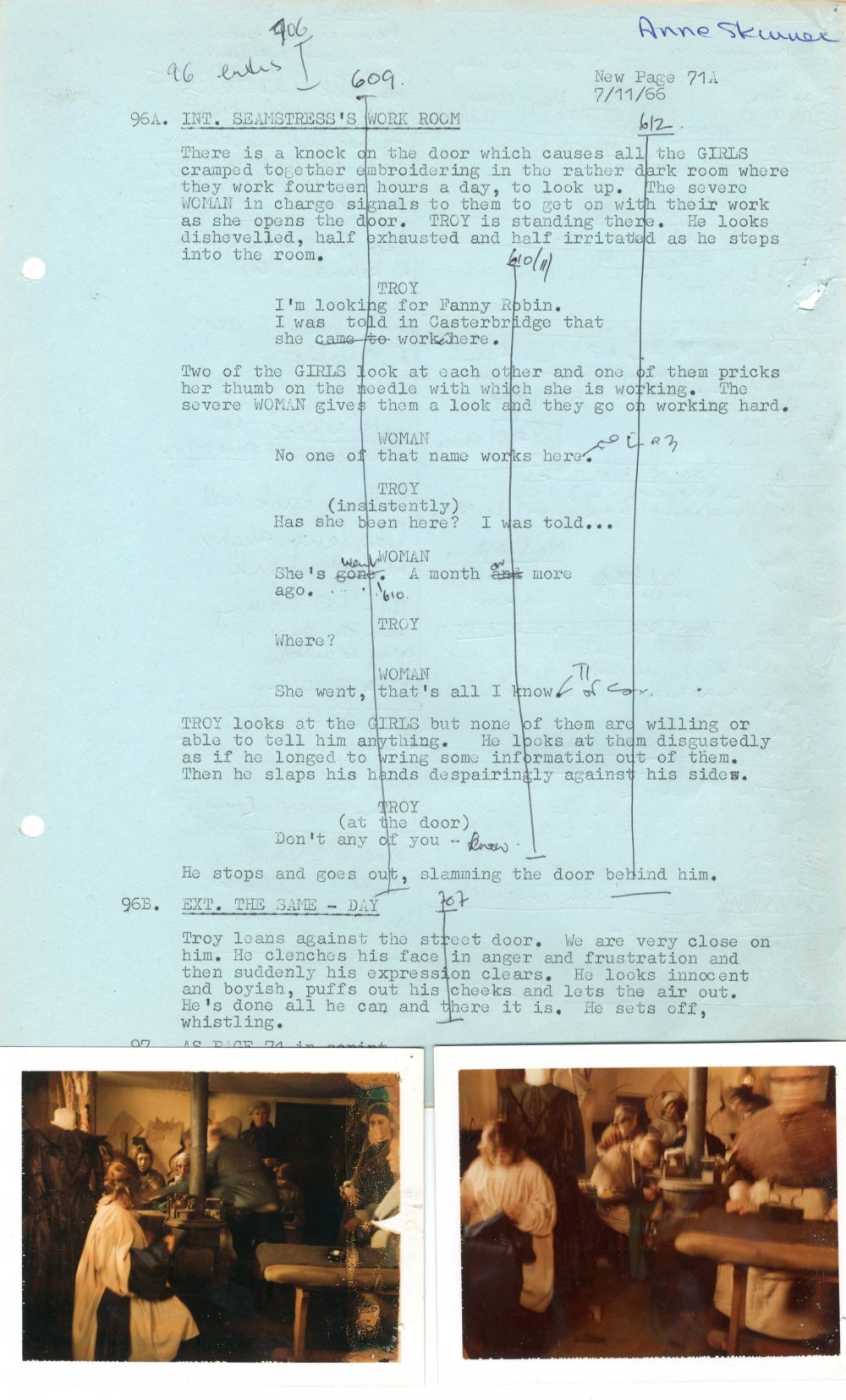 In spite of ruthless further editing the film was released at a majestic 165 minutes. Brisk box-office business in Britain was not matched in the US (perhaps due to tepid press reviews on both sides of the Atlantic – and its challenging length). Despite being one of most ravishingly evocative depictions of rural 19th-century England, the film was harshly overlooked, with only Richard Rodney Bennett receiving an Oscar nomination for his haunting music score. Schlesinger and producer Janni may have misjudged public taste, as the understated beauty and unashamed nostalgia of Far from the Madding Crowd seemed at odds with grittier themes in The Graduate, Bonnie and Clyde and In the Heat of the Night, which were also in competition that year.