Danger, desire, death and a donkey – Cary Grant, Jean Arthur and Rita Hayworth are flying high in a welcome return to the big screen for Howard Hawks’s peerlessly entertaining tale of aviation in the Andes. 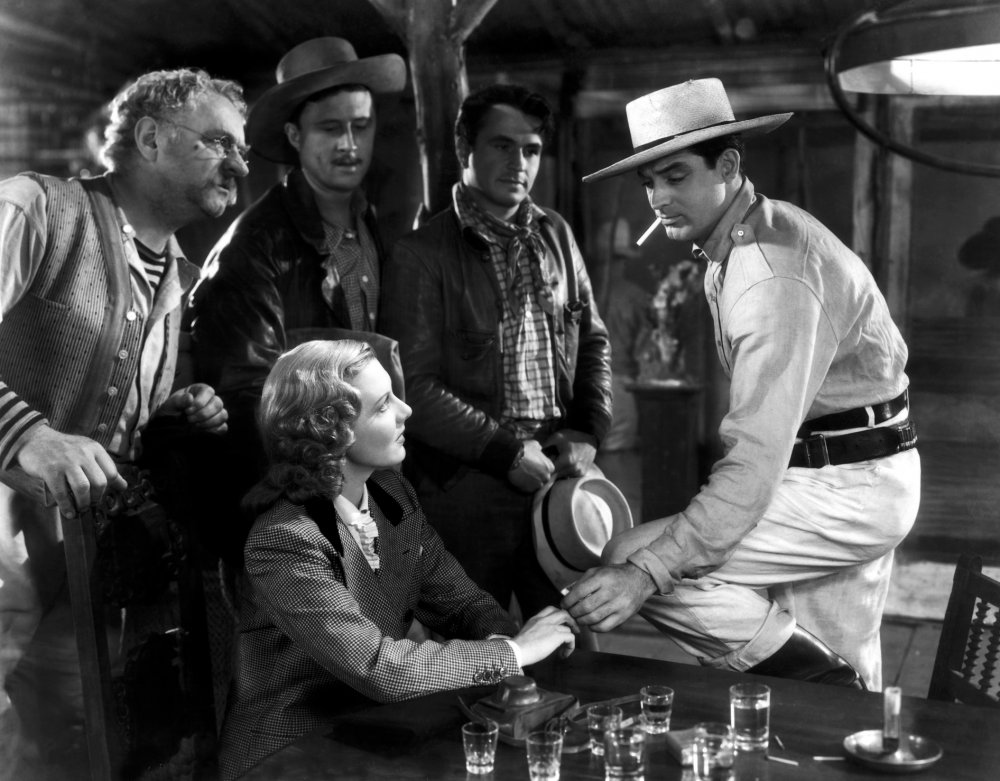 Only Angels Have Wings is back in cinemas, included an extended run at BFI Southbank, from 15 May 2015.

Many fine films screened in last year’s BFI London Film Festival – indeed, there were some great ones – but of those I saw, none gave me more utter enjoyment than Only Angels Have Wings, made 75 years earlier by Howard Hawks. The film was playing in a new 4K digital restoration, and judging by the response of those sitting around me in a packed NFT1 at BFI Southbank (there was a loud round of spontaneous applause at the end credits), I was far from alone in my happiness. So it is with great pleasure that we at BFI Southbank are now giving an extended run to the film – again in that very lovely new version overseen by Sony’s master of restorations, Grover Crisp. 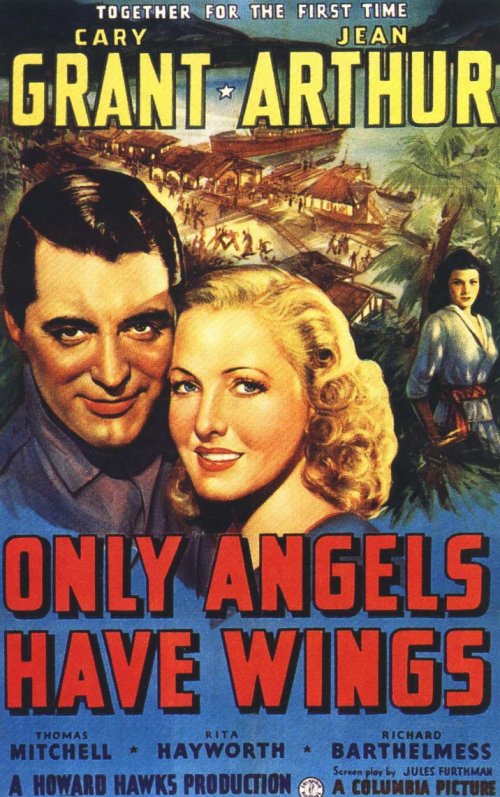 I mention the personal pleasure I derived from that screening – which remained as great as the pleasure I’ve derived from the film each and every time I’ve seen it over the years (and that must be getting on for about a dozen viewings now) – because I’ve always found it quite strange that I like the film so very much. By that, I don’t mean that I don’t like the films of Hawks, who’s long been one of my favourite American directors), nor that I have an aversion to the movie’s stars: who wouldn’t be pleased to be watching Cary Grant, Rita Hayworth, Jean Arthur and Richard Barthelmess, not to mention such agreeable character actors as Thomas Mitchell, Sig Ruman and Noah Beery Jr?

No, what always surprises me about my liking this film (which I’m seriously tempted to designate as a masterpiece) is that it is also, in many respects, patently quite absurd. The story – Hawks’s own, apparently, though the screenplay is attributed to the great Jules Furthman – is pretty much a Boys’ Own-style affair about a bunch of daredevil pilots down in some anonymous banana republic flying dangerous missions over the Andes. The company, headed by Grant’s Geoff Carter, is on the brink of going bust unless they keep the cargo – which runs from mail to medics to explosives – constantly moving. And since this is a Hollywood film, and a Hawks movie to boot, as if that weren’t enough along come a couple of women to add to Carter’s worries: marooned showgirl Bonnie Lee (Arthur), gooey for Geoff after an initially bumpy meeting-cute; and old flame Judy MacPherson (Hayworth), now married to a flier the rest of the team regard as… well, not one of the team.

To give away more might spoil your enjoyment. What I can reveal, however, is that some of this derring-do involves scenes involving light airplanes which are clearly models; it also features a high Andean pass that is evidently a studio set – complete with a donkey named Napoleon whose relevance to the narrative is entirely obscure – and an airfield and company headquarters which appear actually to consist of a bar with a piano, a couple of rooms and a few square yards of patio.

Then there’s Carter himself: Grant in a kind of cowboy hat, wearing trousers hitched up halfway to his armpits, so heedless in his heroism that his right-hand man The Kid (Mitchell) adores him almost as much as – or perhaps even more than – poor Bonnie. Is that because Carter’s forever lighting the Kid’s cigarettes for him? Or is it because Carter – once bitten, twice shy where women are concerned – is simply a man’s man, and won’t let silly stuff like feelings get in the way of his work?

How are we meant to take this seriously? You may well ask. On paper this sounds like prime escapist hokum – which in many ways it is. But – and it’s an extremely big ‘but’ – Hawks somehow pulls it all off, so that we are wholly engrossed, from beginning to end, in the lives and deaths of these people. He manages that partly because he mixes the studio artifice up with some stunning footage of real planes in the air (one flight out to a remote plateau includes moments that always make my stomach churn), and partly because he’s as heedless about what does or doesn’t look ‘real’ as Carter is about the risks he and his fliers have to take. 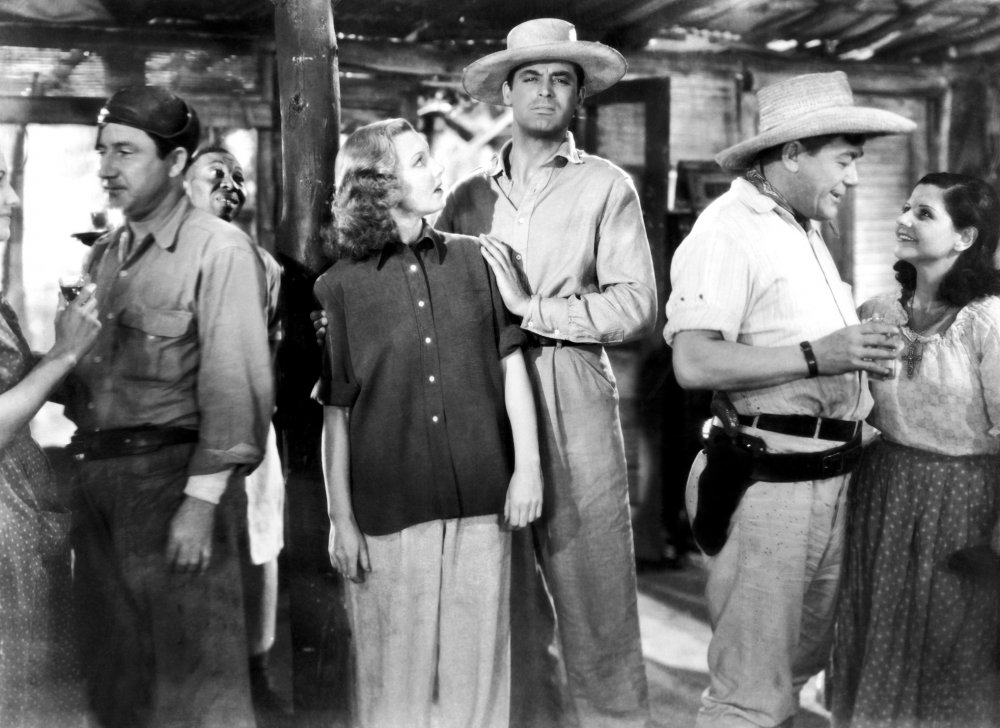 Like Carter, Hawks simply gets on with the job that has to be done and, being very versatile, adapts his methods according to the problems at hand. When fog threatens a pilot’s landing, Hawks wisely focuses, mainly in close-up, on worried faces watching the sky, letting the plane engine on the soundtrack do most of the narrative work. Later, a funereal scene is deftly turned into a boisterous singalong by the stark, simple phrase, “Who’s Joe?” – an example of Hawks’ skill at handling quickly shifting moods. Later still, a deathbed scene is handled with a delicacy of tone one would probably never expect from a director known for making movies about (supposedly) rugged masculinity.

But then Hawks, for all that he kept returning to certain situations, phrases, character types and predicaments, was never one to stick to what one would expect – from him or from anyone else. A little like Yasujiro Ozu, he worked wondrously rich variations on a small number of themes. And like Ozu, he used a very light touch to explore, to serio-comic effect, the parameters of life, love and death. Absurd? Hardly. Just great.

Behind the scenes on Only Angels Have Wings 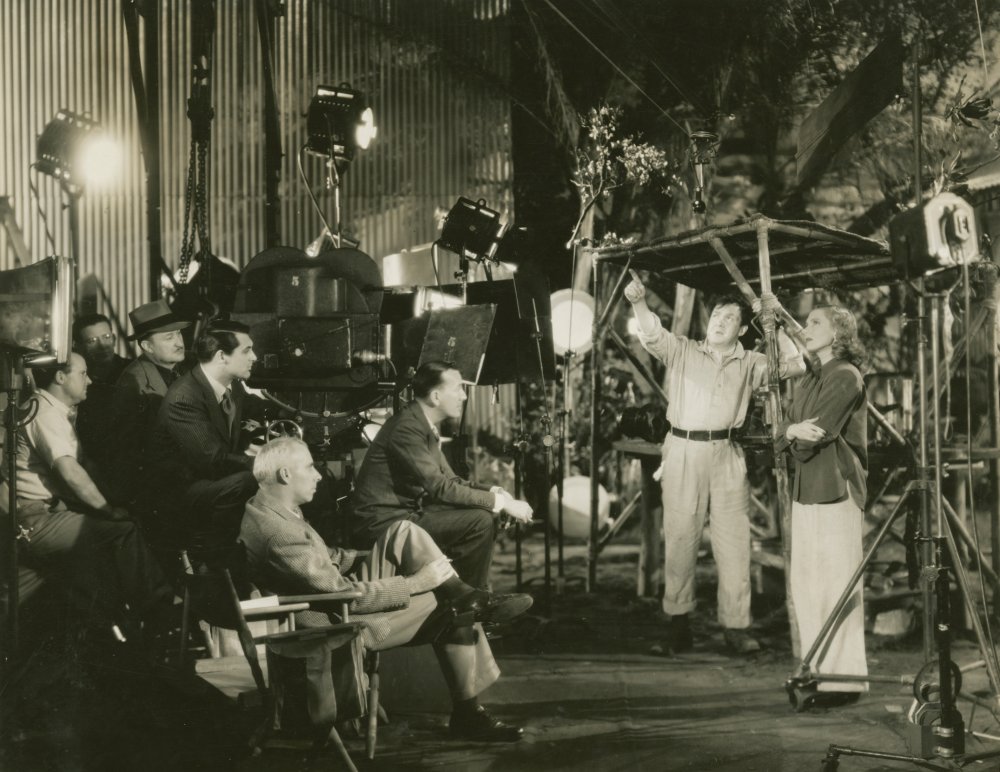 Howard Hawks, cast and crew on the set of Only Angels Have Wings (1939) 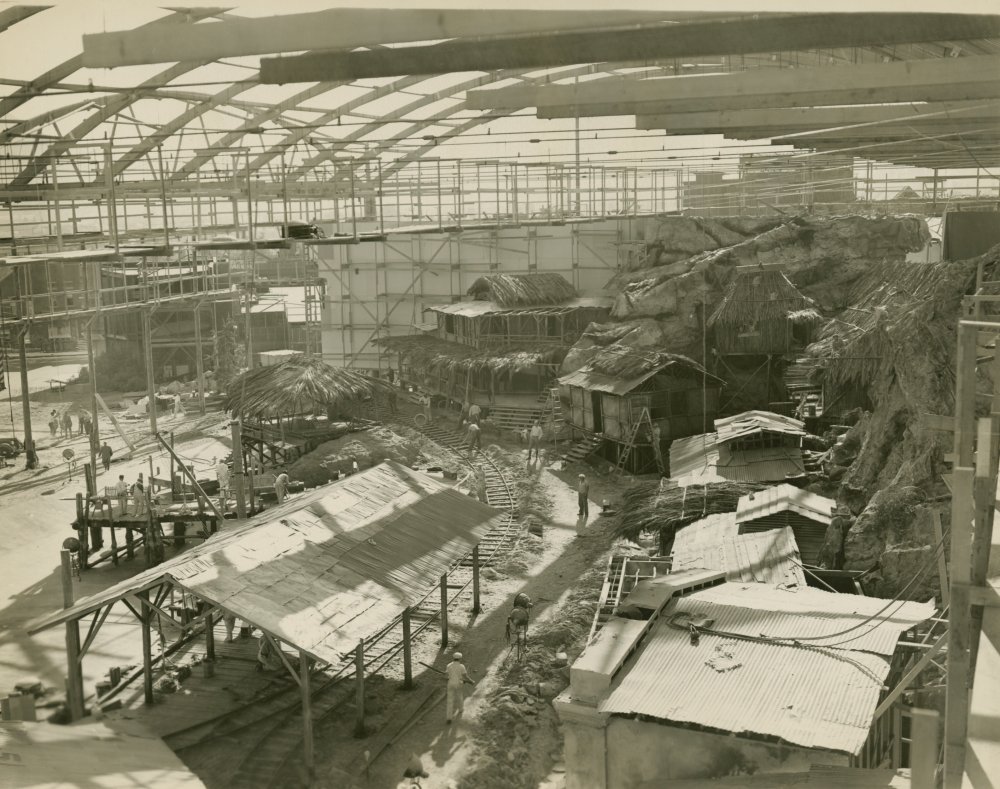 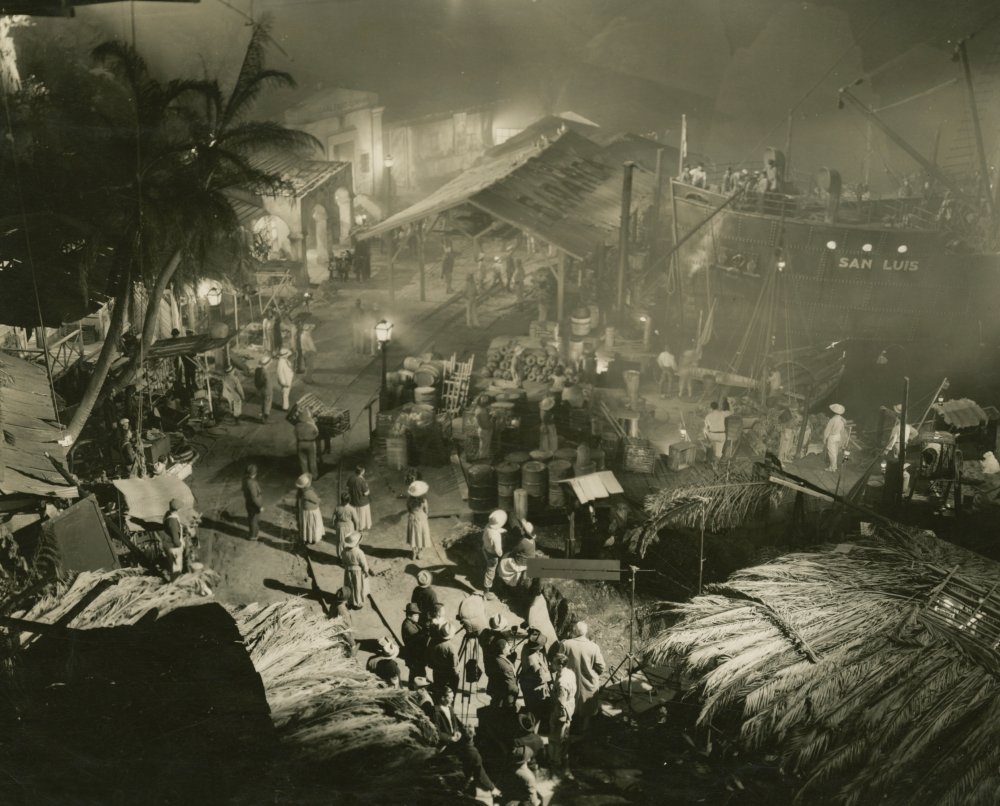 Production crew on the set of Only Angels Have Wings (1939) 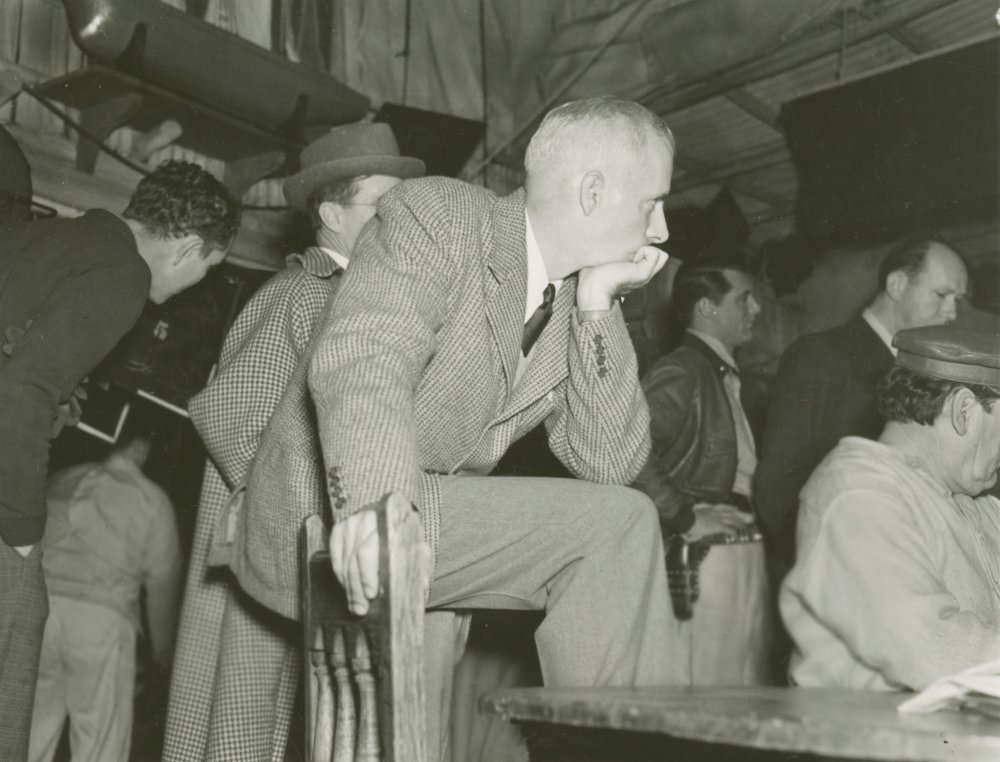 Howard Hawks on the set of Only Angels Have Wings (1939)