Not just a spy film, Alfred Hitchcock’s 1946 classic Notorious is a perverse love story that presents one of the most anguished relationships in American film. 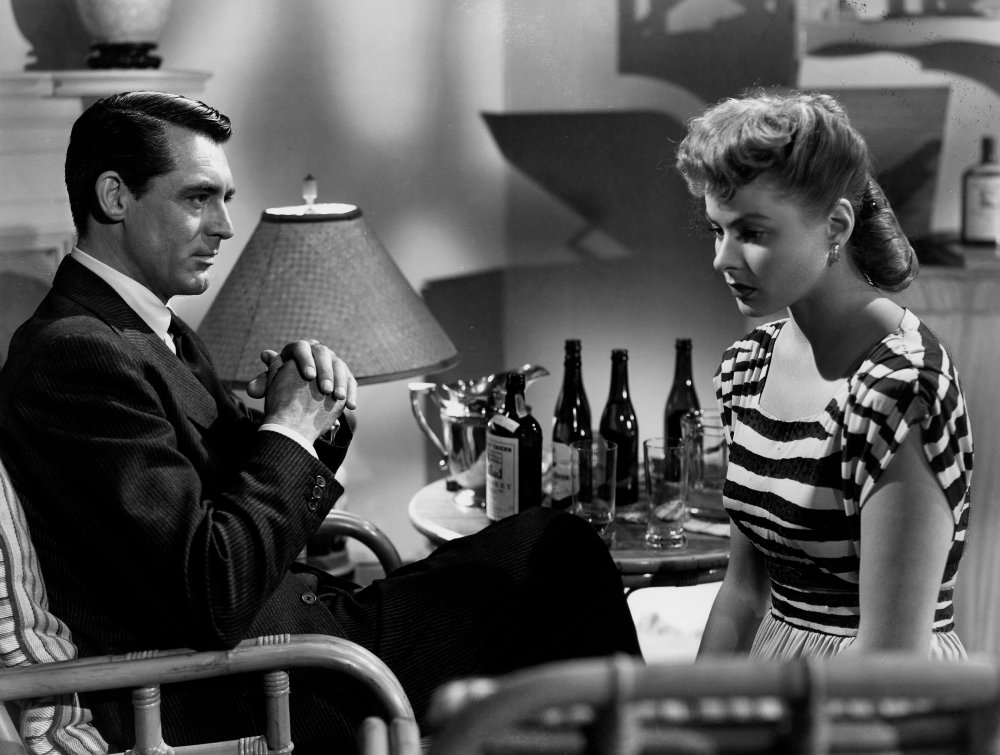 ALICIA: My car is outside.
DEVLIN: Naturally.
ALICIA: Wanna go for a ride?
DEVLIN: Very much.

Seven decades after its premiere in New York on 15 August 1946, it’s impossible to shake the feeling that Alfred Hitchcock’s Notorious is a perfect film – a rare feature in which you wouldn’t want to change a thing.

Next to Vertigo (1958), it’s certainly the Master of Suspense’s gravest, saddest and most perverse offering. Yet, in its opening moments, there’s something close to the lighter mood of screwball comedy in the bemused exchange between party host Alicia Huberman (Ingrid Bergman) and suave gatecrasher Devlin (Cary Grant), the lone awake survivors at Alicia’s decadent soirée.

Here’s how it starts:

The writing is by Ben Hecht, a man whose brisk, effervescent scripts for classic screwballs such as Nothing Sacred (1937) and His Girl Friday (1940) deserve their own AOC certification.

We’ve been introduced to Devlin from behind, in mysterious shadow, watching silently as the other party guests either leave or pass out in distended stupors. Bergman’s sozzled hostess, wearing an immortal, striped party outfit, bare at the waist, doesn’t really remember inviting this interloper, but she thinks he’s all right (“You’re quite a boy”, she says, as he downs a nightcap).

The after-hours lighting (cinematography by Ted Tetzlaff) seems to make everything in the room glisten, from Devlin’s brilliantined hair to Alicia’s booze-misted eyes as she makes inquisitive glances towards the stranger. She suggests a picnic, outside. It’s early morning, chilly even in Miami, so Devlin ties a scarf around her midriff as they head out to the car. Do we want to go for a ride? We do. 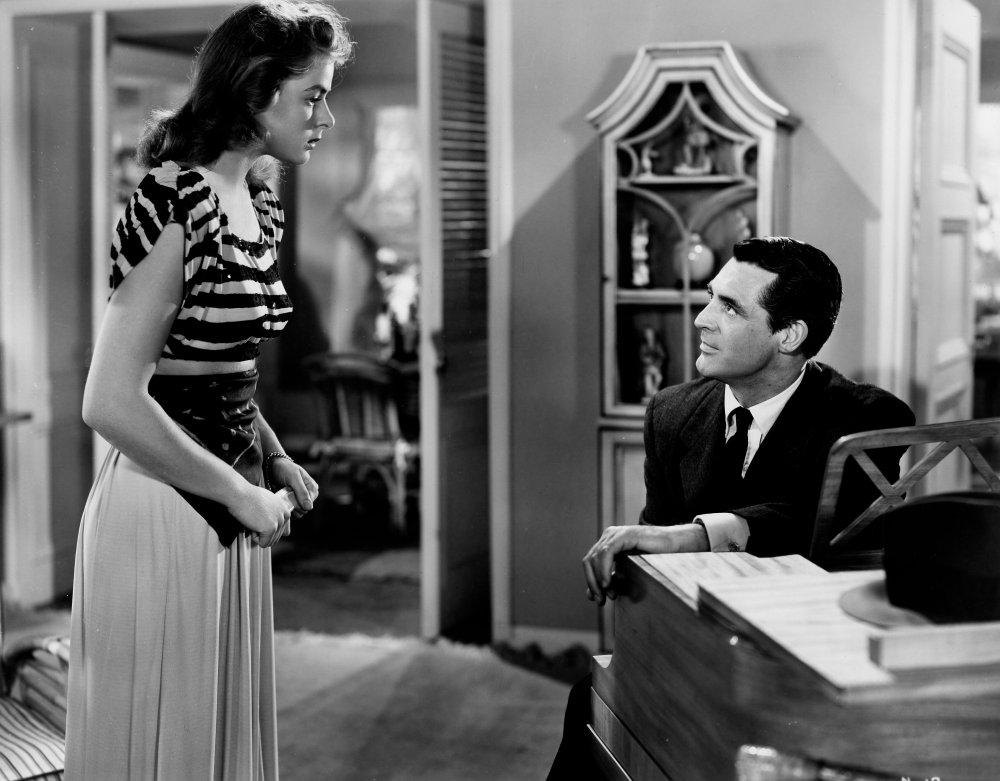 We’re already falling for Alicia and Devlin falling for each other. A drunken joy ride follows – a precursor to the drink-driving episode in Hitchcock’s later spy thriller North by Northwest (1959), when Cary Grant takes the driving seat. Here Devlin lets Alicia drive, ready to grasp the wheel if she falters, while she accelerates ever faster to “wipe that grin off your face”. “This fog gets me”, Alicia says – though Devlin points out it’s just her wind-blown hair in her eyes.

They’re both careering headlong into one of the most anguished relationships in American film. Alicia is the daughter of a traitorous German American father, who we see convicted of war crimes in the film’s opening court scene. Devlin is an intelligence man, sent to enlist Alicia’s help in infiltrating a circle of her father’s Nazi friends living in South America – namely an old paramour of Alicia’s called Sebastian (Claude Rains).

What follows is a brilliant spy movie (the best of them all, and without a gun in sight). But it’s not exactly in the jolly vein that Hitchcock perfected back in England with The 39 Steps (1935) and The Lady Vanishes (1938). Nor, though there are kindred elements, does it precisely resemble the paranoid, nightmarish espionage movies that Fritz Lang was making around this time, such as Ministry of Fear (1944) or Cloak and Dagger (1946). More lastingly, it is an agonised love story, closer to Vertigo in its ruthless demonstration of how twisted and neurotic our attraction to others can be.

At first, neither Devlin nor Alicia realises how far it will be necessary for Alicia to go in her mission to ensnare Sebastian: feigned love to start with, then marriage. It’s a seduction that the once loose-living party girl could have done in her sleep, but – having put her in this situation – Devlin misinterprets her willingness as her old habits dying hard. As he begins to shrink from her, she throws herself into her dangerous task, masochistically whoring herself for Uncle Sam because the man she loves thinks no better of her. 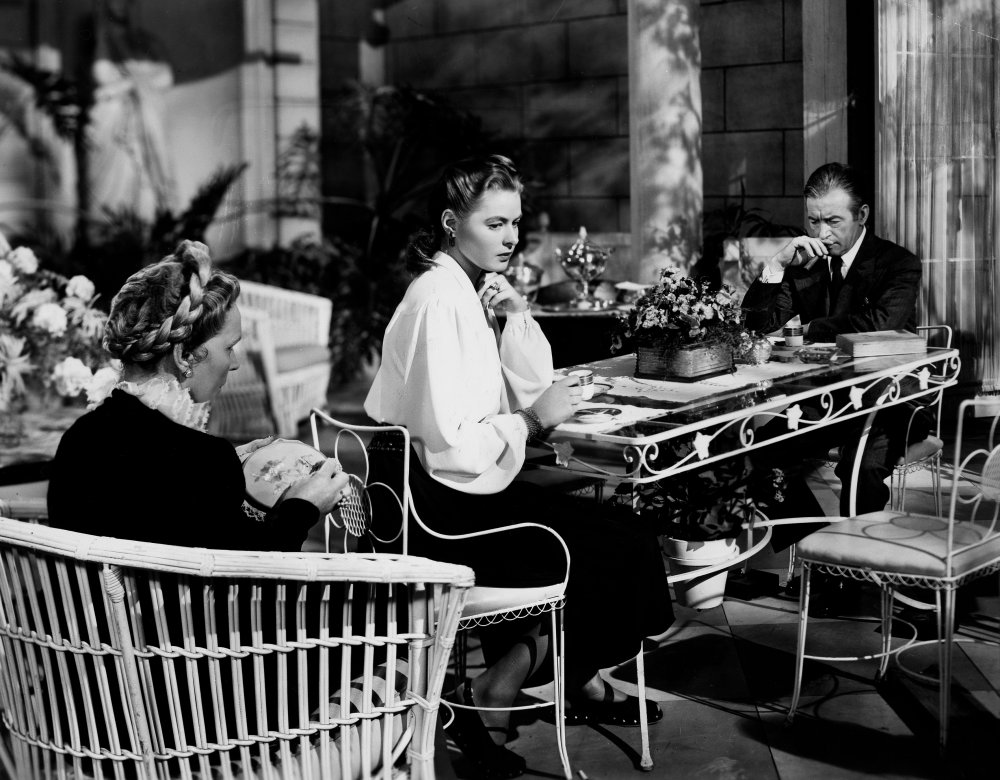 Like Vertigo, Notorious is a Hitchcock film that you remember for its tortured feelings and faces as much as for its suspense plot. There’s a brilliant and very famous sequence involving the furtive search of Sebastian’s wine cellar, as Hitch intercuts to the champagne running out at the party upstairs. And it’s preceded by some inspired technical wizardry, in which a crane shot moves from a wide perspective on the guests arriving at said party, swooping down from the grand staircase to end on a tight close-up of Alicia’s hand, clutching the key that will gain her entry to the cellar. 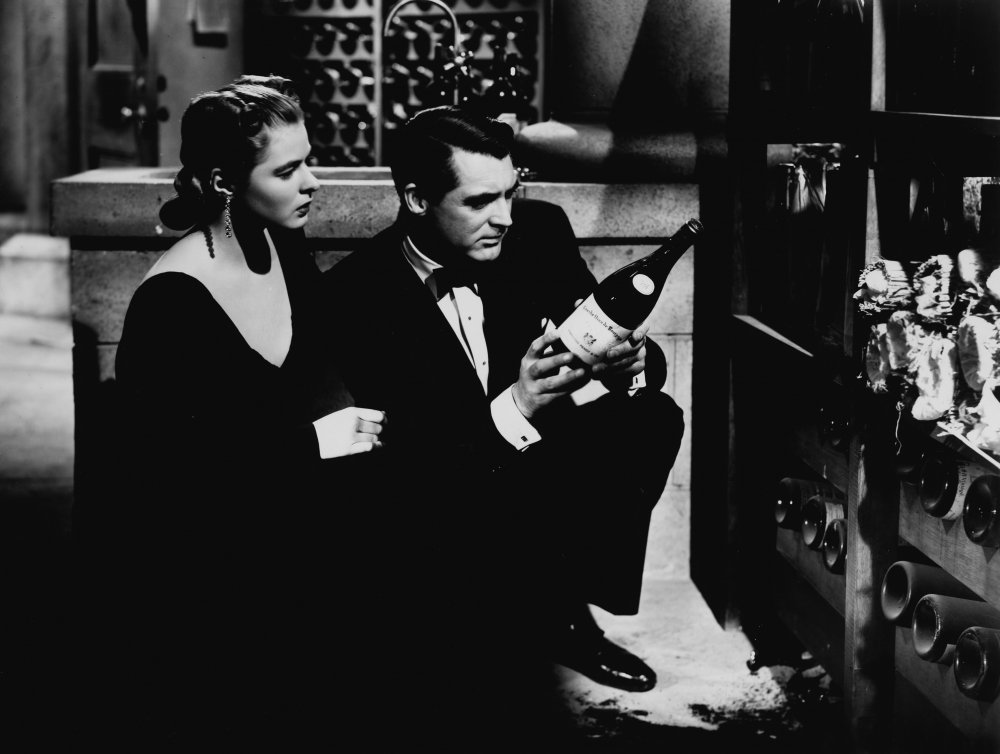 But no less momentous is an extended clinch that Alicia and Devlin enjoy on their balcony in Rio, in their all-too-brief honeymoon romance before the nature of her patriotic duty is revealed. Since the censor forbade screen kisses lasting longer than three seconds, Hitchcock prolongs the moment and considerably ramps up the eroticism by having the lovers intersperse their kissing with nuzzling and murmuring. This way, it lasts for two and a half minutes – and the atmosphere of almost carnivorous desire is electric. 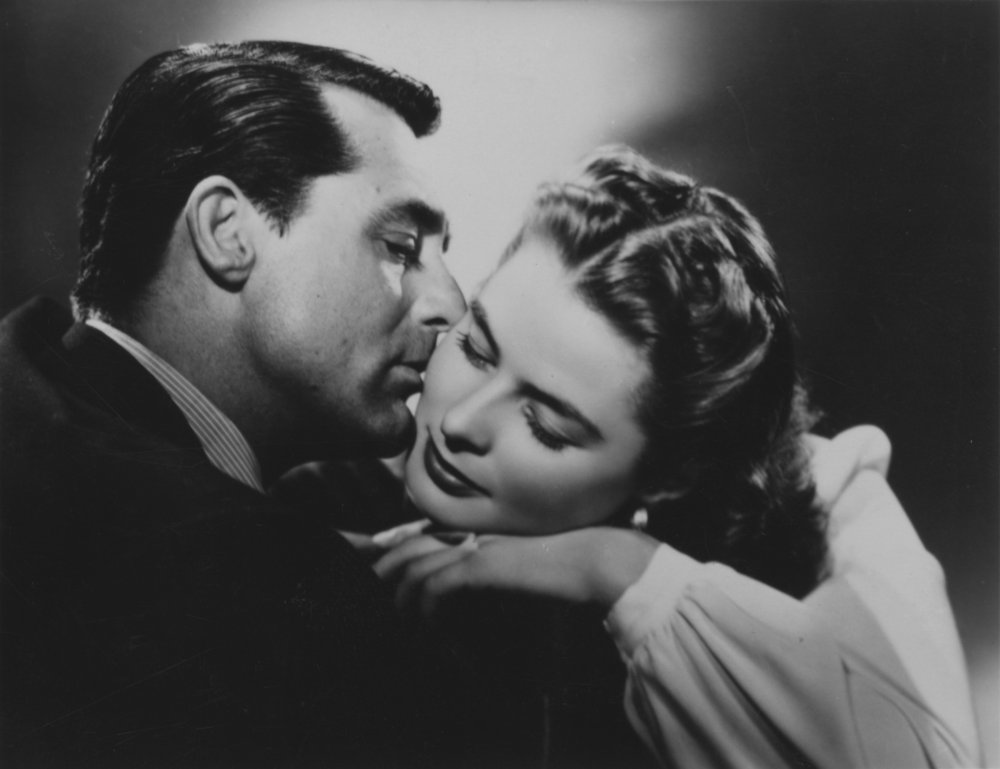 It must be said that, in navigating these turbulent waters, Hitchcock has at his disposal some of the most immaculate lead performances that have ever graced a film. Ingrid Bergman, Cary Grant and Claude Rains – this is a top-three cast billing made in movie heaven. The director had started to burrow into Grant’s dark side with Suspicion (1941), which had more melodramatic questions about the extent to which such charming men might actually be murderers. Here the interrogation is far more subtle and searching, drawing all masculinity into its doubt.

1946 was a very fine vintage of American cinema. It’s a Wonderful Life, The Big Sleep, My Darling Clementine, Gilda, The Best Years of Our Lives, The Postman Always Rings Twice and Duel in the Sun all saw their first release – and so many of those too are tinged with anxiety, sexual or existential.

Like these other septuagenarian classics, Notorious remains a lasting demonstration of the potency and complexity possible in old Hollywood at the peak of its powers. But its balance between pleasure and pain, between its seductive surface and plungingly dark depths, is uniquely Hitchcockian.