Night animals: the women of Woodfall

How British films of the 1960s brought working-class women characters blinking into the light after decades of being ignored.

• Buy Woodfall: A Revolution in British Film on Blu-ray 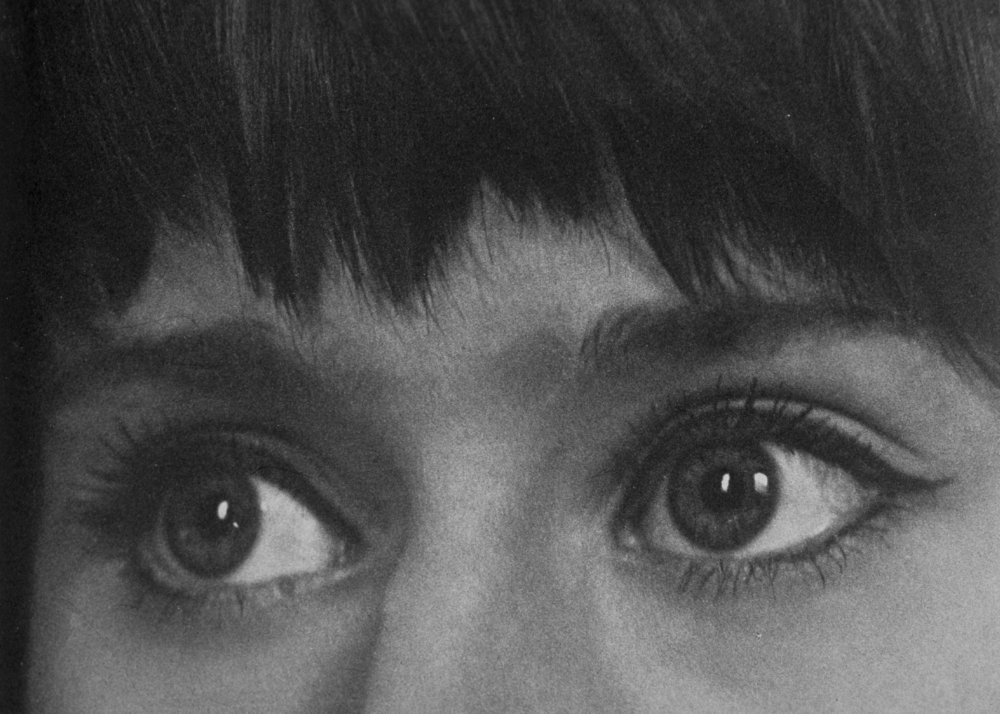 Rita Tushingham as Kate in Girl with Green Eyes (1964)

“You’re like a lemur,” Eugene tells his younger lover Kate in Girl with Green Eyes (1964), “a beautiful night animal, with big, hungry eyes.” In Look Back in Anger (1959), Alison snaps into a performance of the “beautiful, great-eyed squirrel; hoarding, nut-munching squirrel” of her husband’s evocation. Two large-eyed, hungry women.

The first of these descriptions has the air of condescension, typical of Peter Finch’s cavalier lover, while the second – not a simile – is depersonalising and, as such, plays as much a part of Jimmy’s persecution of his wife as his rancorous outbursts. Still, these two descriptions aren’t far off the mark. 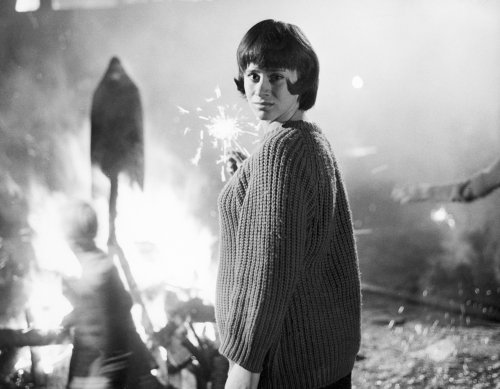 The ordinary, by-and-large working-class women and girls of the Woodfall-produced films of the 1960s are night animals inasmuch as the John Osborne- and Tony Richardson-founded company brought them out of the darkness and into the light. Their hungering comes in all forms: appetite for sex, romance, adventure, play and food. Some want sexual freedom. Some want deliverance from filial obligation, the “little attentions” Helen asks of her daughter Jo in A Taste of Honey (1961).

All want to live – not as social expectation prescribes, not as someone’s daughter, not behind an ironing board, but in such a way as brings them home to themselves. As Jo tells her gay friend Geof, brusquely refusing his offer of marriage (“for the baby’s sake”), “You’re nothing to me; I’m everything to myself.” Britain’s working-class women had long gone unregarded by the feature-film camera. Under the auspices of Woodfall, they blinked into the light of the lens’s attention.

“They” were shop-girls Kate (Girl with Green Eyes) and Jo (A Taste of Honey), woolgatherers both; factory-worker Doreen (Saturday Night and Sunday Morning), frantic to get out from under her mother’s roof; unhappily married Brenda, carrying on with her husband’s workmate (Saturday Night and Sunday Morning); single mother Helen (A Taste of Honey), making up for lost time by going with younger men; Baba, in Girl with Green Eyes, who, “sick to death” of “hick” Dublin, swaps secretarial school for the unknown of London; and chambermaid Jenny Jones, falsely accused, cast out on her ear, and refashioned into the fast Mrs Waters (Tom Jones).

The camera’s perlustration of female faces in the Woodfall films of the 60s is lasting testament to what was, at the time of making, a fascination with the new. These working-class faces – in many cases belonging to non-professionals (Rita Tushingham) or actors making their screen debuts (Shirley Anne Field, Lynn Redgrave) – were as unfamiliar to the contemporary British filmgoer, and as uncommon in the context of cinematic fiction, as were the lowly, real locations of A Taste of Honey and Saturday Night and Sunday Morning (1960): the cobbled streets of Salford, and the ginnels and double-entries of Nottingham’s terraced housing. Woodfall director Tony Richardson insisted that he film on location; he also preferred that his newcomer-star Rita Tushingham wear no makeup. (The freedoms of fresh air and clean face Tushingham would miss on other film sets.)

It was central to the poetic realist project of the British New Wave movement that its fictional working-class characters resemble as near as possible their real-life counterparts. Domestic spaces – seedy, stymying, hostile, impermanent – impel the narratives of many Woodfall-made films. In the coming-of-age drama Girl with Green Eyes, convent-girl Kate shuttles between twin-room lodgings in town and her lover’s rural manor house. This alternating between the dormitory world of face-masks and romance novels and the higher-ceilinged environment of Eugene’s home – where the fire burns perpetually in the grate, and Bach plays on the phonograph – reifies the transitional phase Kate occupies between child and adult, innocence and experience. Kate has a foot in both camps, a state of being that might be enjoyed, but which Eugene seizes as pretext for leaving her. 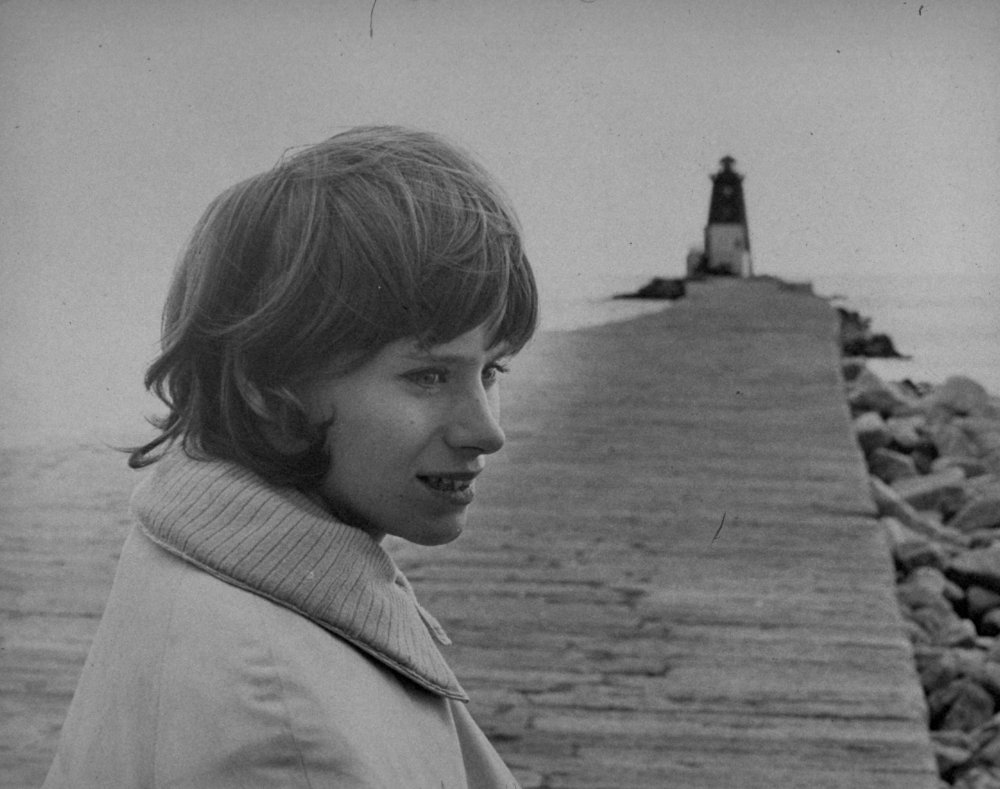 Rita Tushingham as Kate in Girl with Green Eyes

Kitchen-sink realism demanded of its actresses a new kind of physical performance: the performance of habitual activity. Lynn Redgrave, as Baba, empties cosmetics onto her dressing table. Tushingham, as Jo, takes a handkerchief from her head and knots it round a naked bulb. A young 17 and old before her time, Jo is a tomboyish Blanche Dubois, who never knew the high life, but mourns the loss of it anyway. Dora Bryan, as Jo’s mother Helen, towels herself dry after a bath. Rachel Roberts, as Brenda, makes eggs and bacon for Arthur, for whom playing husband in another man’s home is as pleasurable as the food on his plate. Mary Ure’s Alison in Look Back in Anger, though not of working-class origin, tends to never-ending laundry. 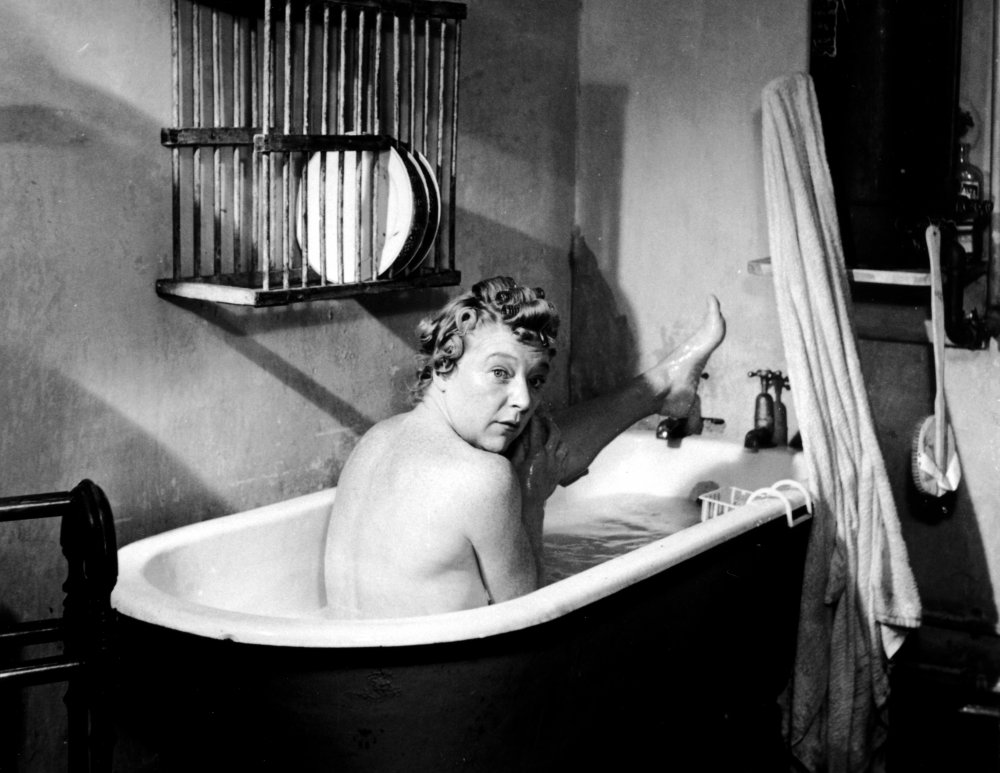 Mirror images give visual expression to Woodfall’s commitment to realism. When Woodfall women peer into mirrors, the spectator sees them as they appear to themselves; sees them exactly as they are. These mirror scenes affirm that there is no separation between the character and her representation; that every image confided by the camera is as frank and unscheming as a reflection.

Woodfall women primp and pout in mirrors, readying themselves for a romantic engagement – as Helen does in A Taste of Honey, passing a comb through her hair before a pleasure-trip to Blackpool. In Look Back in Anger, Alison converses with Jimmy in her toilet mirror, nursing the burn he inflicted – he now concedes – “on purpose”. Alison looks, but seems not to see, Jimmy so big and eclipsing a presence – behind her and in the mirror – that he comes between her and herself.

A Taste of Honey’s teenaged Jo seems none too interested in her reflection. That is, until a classmate comments that Jo and her mother, preparing to flit, are “like a couple of gypsies”, whereupon Jo quizzes the mirror: is she like a gypsy? what is she like? Her wordless observing as she lathers her face turns up no answer. Jo’s eyes don’t consume her image as some women’s do; a soap bubble usurps her attention, and her brows, a little knitted by the girl’s remark, relax. 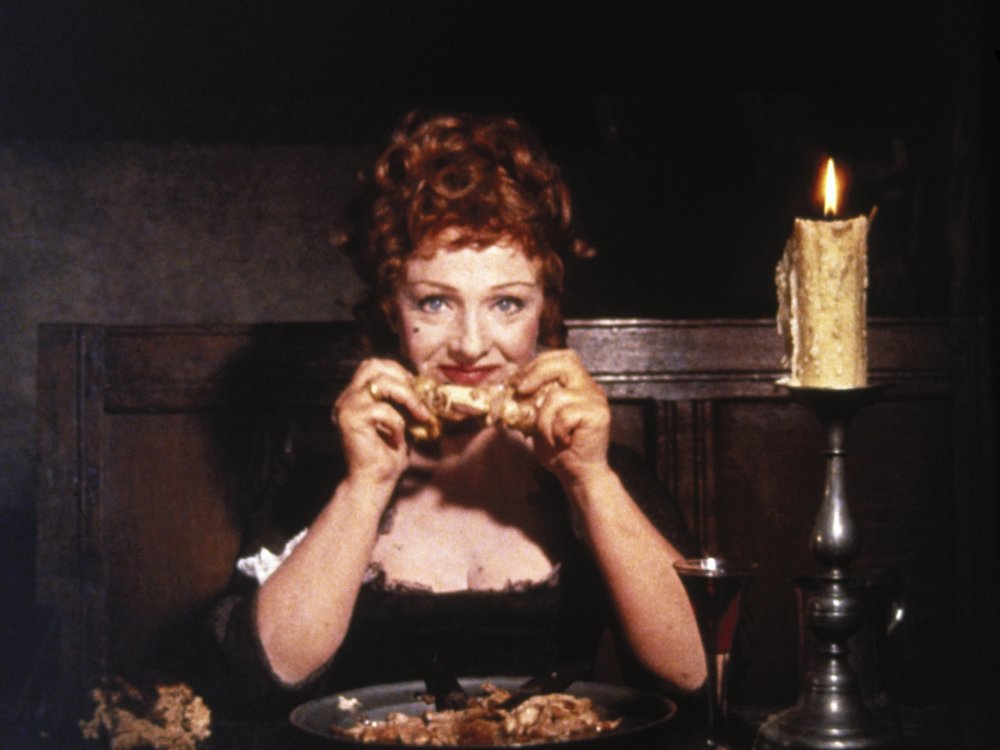 Joyce Redman in the famous dining scene from Tom Jones (1963)

Woodfall actresses excelled at nonverbal performance. Joyce Redman put to work every muscle in her face in the dialogue-less eating scene for which Tom Jones is famous, a performance that earned the actress an Oscar nomination. Clammy, never taking her eyes from Tom (Albert Finney), who sits opposite, she sucks her teeth, tongues the wishbone, mashes fruit against her lips, tilts back her head and tips the oyster into her gaping mouth.

Her Tom Jones co-star, Susannah York, was no less talented or rubber-faced. Sitting down to the harpsichord, York’s Sophie lours privately, pressing the keys without feeling, as her loutish father praises her heavenly abilities: “Ah, you play like an angel.” Later, John Addison’s ‘Love Theme’ plays over a four-minute montage of Tom and Sophie gambolling over her father’s estate. Sophie takes cuttings from a climbing rose, white petals catching in her laughing mouth; she rides a mare barefoot, and dances on the lawn with the spaniel watching; and, caught in a cloudburst, she bobs, jubilant, at Tom’s fetching her a flower from the full river. 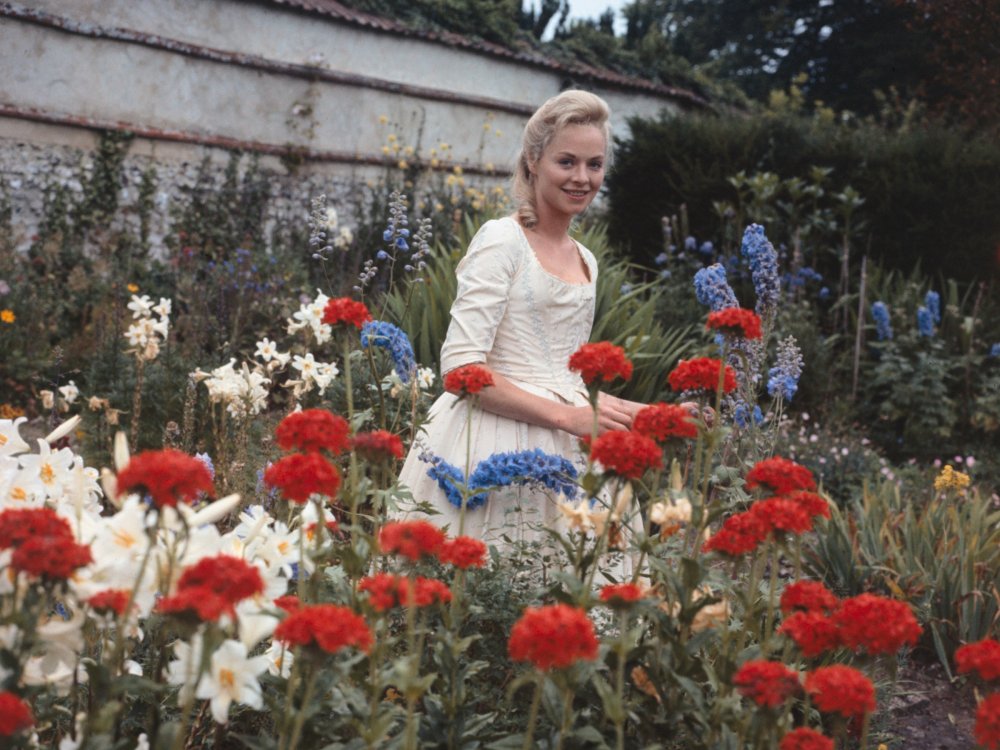 What has an 18th-century inheritress have in common with working-class Jo of 1960s Salford? Only their capacity for play. Jo dances, arms wide, to Jimmy’s tomtom accompaniment and, posing as a flapper for amateur painter Geof, twirls her beads and grimaces. Pratting about, in the world of Woodfall, is not the preserve of men. Just as Arthur Seaton is “out for a good time”, so, too, is his lover Brenda, who wants tenderness and sex as well as to keep her family. Rita Tushingham as Jo in A Taste of Honey

Woodfall is to be praised for individualising its women. It’s an achievement of particular significance for the working-class characters among them, liable, then as now, to be treated as homogeneous; as all alike. The collective works of Woodfall proclaim the multiplicity of working-class experience. No two existences are the same, they say. As Jo calls down to Geof, having marched out of the shade of the arches of Stockport Viaduct: “My usual self is a very unusual self.” Backlit by a big sky, throwing up her arms as though she would take off, she shouts for all the world to hear: “I’m an extraordinary person! There’s only one of me, like there’s only one of you!”