The NHS on film: files from the campaign that launched the National Health Service

As part of the 70th anniversary celebrations of the NHS, we asked Christopher Day from The National Archives to delve into the records on the information films that first shaped public understanding of the revolutionary new health service.

Meanwhile, over on The National Archives website, the BFI’s Patrick Russell explores the films themselves.

• Explore the NHS on Film collection on BFI Player 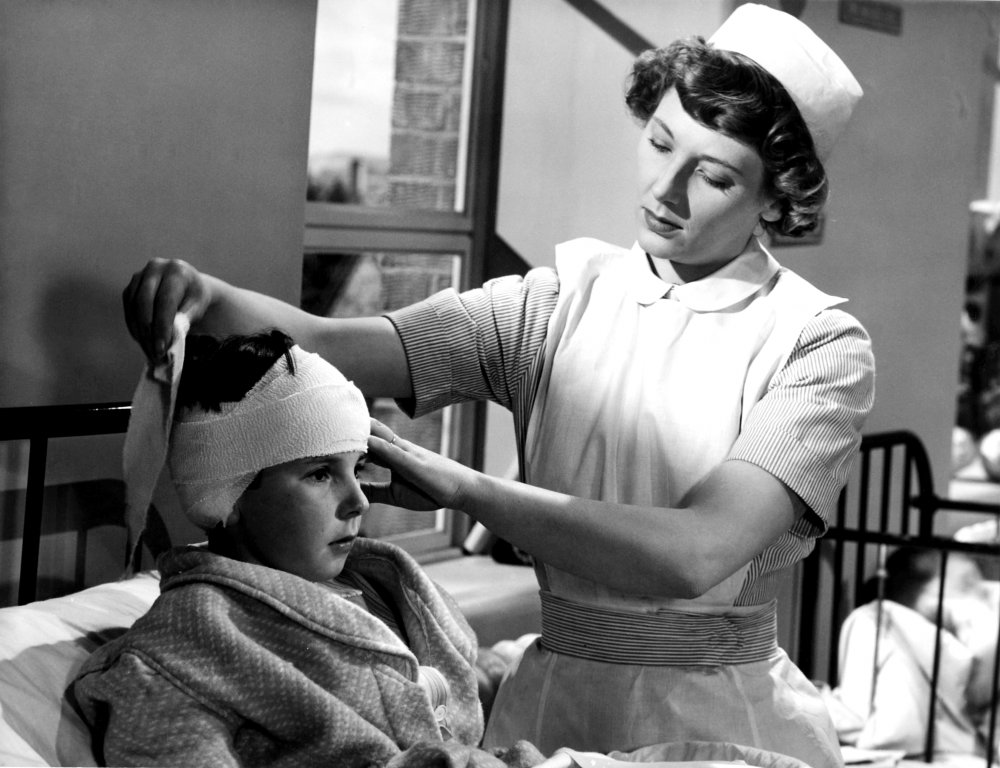 Film and other media have always been key parts of the way that the British government has built public understanding and support of the National Health Service (NHS), which celebrates its 70th anniversary this July.

When Minister of Health Aneurin Bevan faced opposition before the NHS was formed, his solution was to launch a media assault on the public domain, “to publish a sale booklet on it, to run films on it and generally go on with the explanatory work which is most likely to create public demand”.

The Ministry of Health used films like Here’s Health (1948), held at the BFI, which painted a utopian picture of the coming health service, a service that would allow the unfortunate Mrs Carter to get her injured ankle treated and still enjoy Christmas.

My BFI colleague Patrick Russell has written a blog for The National Archives website examining two other health related public information films, Life in Her Hands (1951) and Understanding Aggression (1960), bringing a film historian’s eyes to government records of these films’ production. I am reciprocating here on the BFI site, examining records to pose the question of exactly how films and the cinema as a space fitted in with government policy on nursing recruitment.

Film was just one component in a multimedia marketing campaign as the NHS got going. Key at first was explaining its labyrinthine organisational structure, so that people could use it. 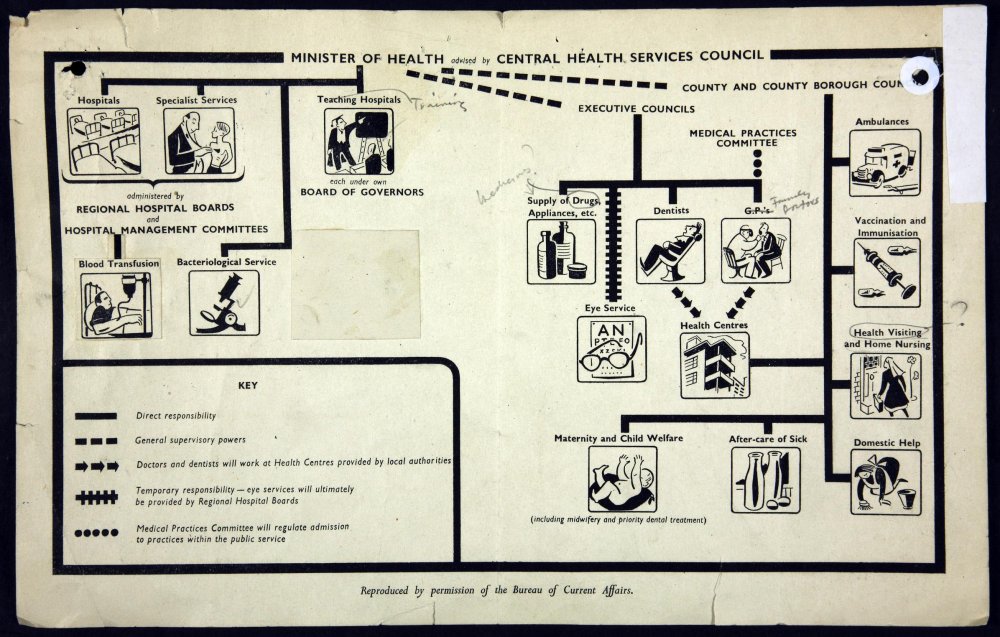 These attempts seem to have been successful. By ‘the appointed day’ of foundation, 5 July 1948, around 95% of the population had signed up as patients. Demand was massive and this created a need for more doctors and nurses.

So the government sought to educate the population about the demands and capacities of the new NHS. Simultaneously they began an even bigger effort, to recruit the nurses they needed to staff the NHS. 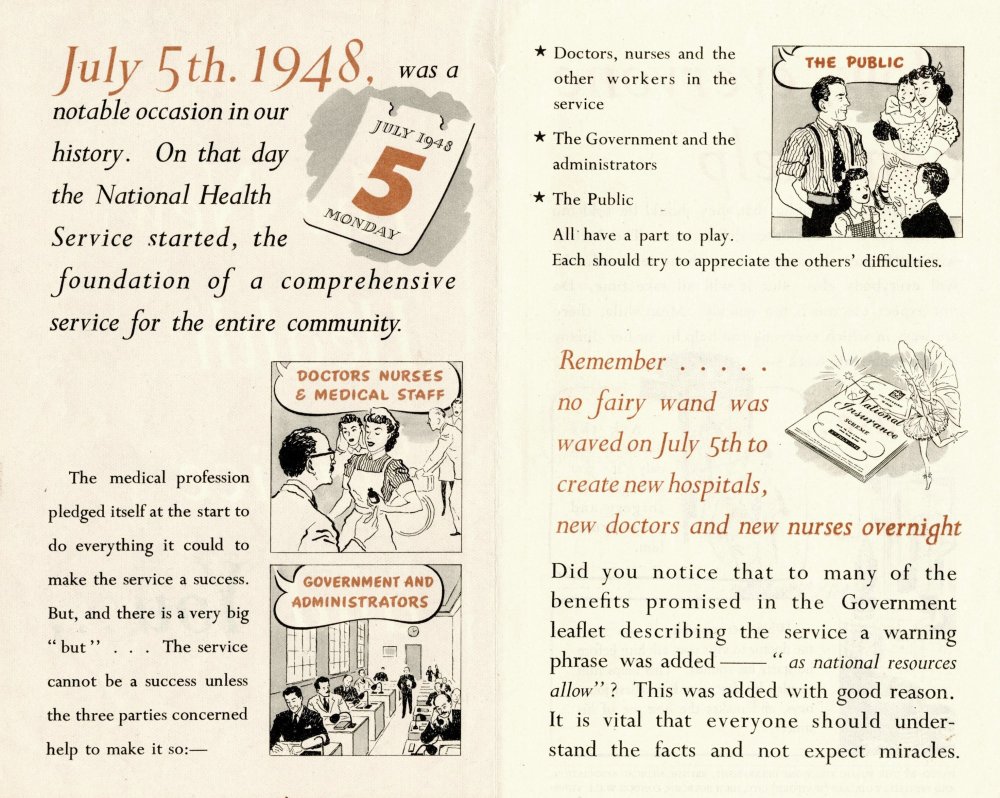 The New NHS and You, government leaflet, September 1948
Credit: The National Archives: MH 55/965

Film and cinema were a huge part of all public facing government department’s work in the immediate postwar period, perhaps to an extent that would surprise us now. The Central Office of Information (COI), the government’s marketing mouthpiece, was involved in producing public information films on many topics, including Life in Her Hands. The scale is staggering; between 1949 and 1950, for instance, the regional offices of the COI put on 43,000 film showings across the country. These covered all topics, but publicising the NHS, and recruiting to it were specific COI aims.

It seems also that the COI and other campaigns to recruits nurses, using film and otherwise, were successful. In 1954 Patricia Hornsby-Smith, junior health minister, informed Parliament that the government has recruited some 35,000 nurses between December 1948 and September 1953, a 27% increase.

But while much of the material, including films, for these campaigns was produced nationally, it seems that when it came to recruiting nurses, the COI and the Ministry said that it was at a local level where “we are convinced that the best results accrue”.

So what shape did these local campaigns take? How did film figure in them? And what films were shown? Fortunately a fascinating file from within the Ministry of Health’s archives gives us an insight into nursing recruitment campaigns conducted in the 1950s.

The National Archives file MH 55/944 contains dozens of returns from local nursing recruitment committees, recounting the progress and success of their campaigns. The showing of public information films features in many of the campaigns and often seem to be the biggest success at getting the public engaged.

Tottenham’s is the first report in the file. A key part of their campaign was showing the 1944 film Student Nurse, dramatising the journey to qualification, to 800 people in the town hall. Despite this though, they only got three new nursing recruits. “Such energetic campaigning deserved better immediate results” wrote the disheartened local officer. 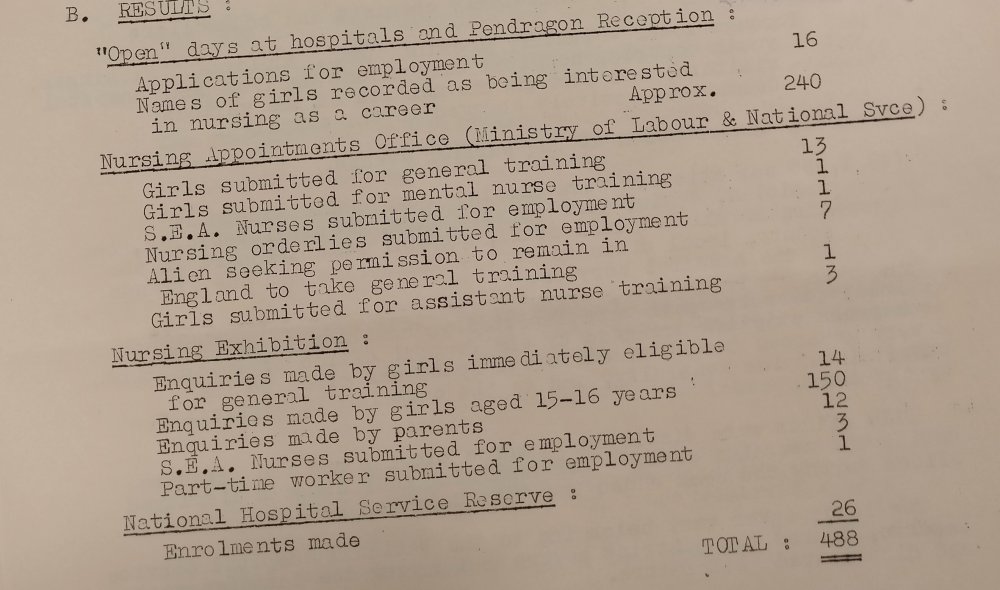 Summary of the results of the Reading, Berkshire nursing recruitment campaign, 1952
Credit: The National Archives: MH 55/944

Other campaigns were successful though, with the Reading Committee’s 1952 campaign generating 488 new recruits. Many campaigns also utilised the powerful attraction of cinema to young people – either showing films or exhibiting ‘cinema slides’ depicting nursing before local film showings.

The May 1952 Oldham campaign showed nursing films twice a day for a week. As well as 80 enquiries, they received letters of appreciation for the films. In Stoke-on-Trent meanwhile, the showing of the films Nurse and The Nursing Story at 24 local schools was praised as the “most successful feature of the campaign”. 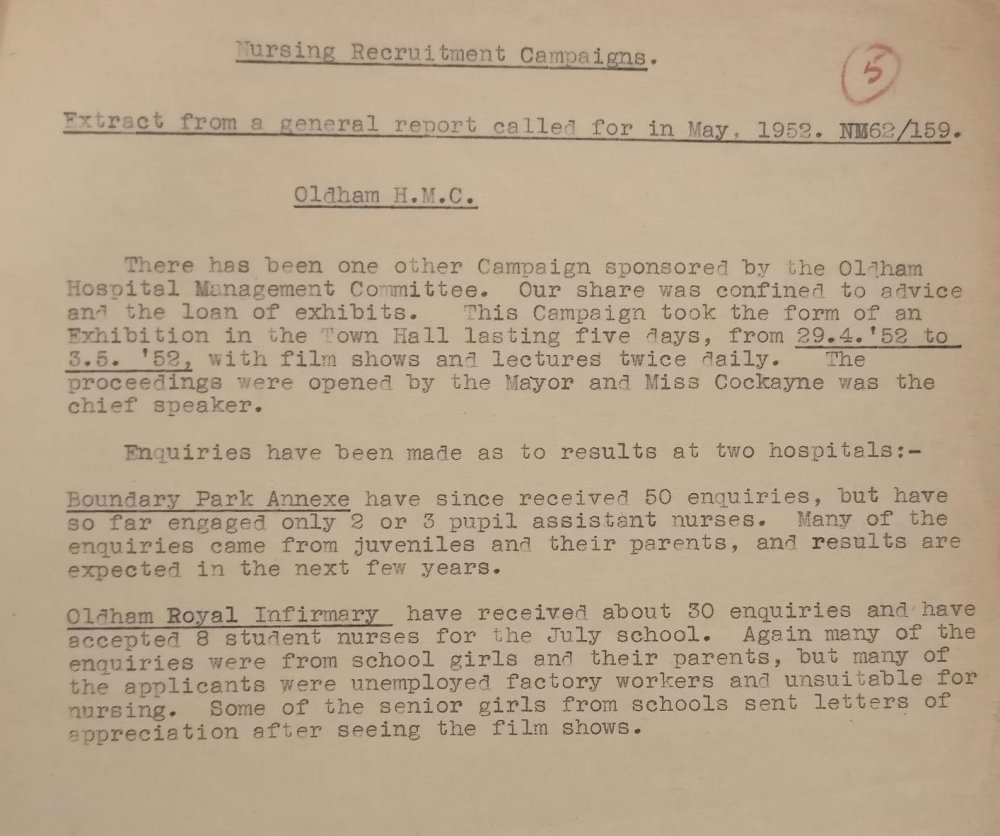 Phillip Leacock’s Life in Her Hands, which Patrick has blogged about, makes an appearance too. It was shown in Devon in 1952, but only once, as the Sister in charge “adversely criticised [it] as being unsuitable for the occasion”. Replacement film Student Nurse was “somewhat disappointing” in comparison.

Watch an extract from Life in Our Hands

Leacock’s other film, Out of True (1951), a film made to dispel myths and recruit people to psychiatric nursing, appears to have been shown more regularly. Indeed the myth-busting capability of films about nursing seems to have been highly regarded by many local committees, particularly with schoolgirls who would soon be old enough to become nurses. Film’s ability to “correct wrong impressions” about a nurse’s life was “useful” said the Tottenham report.

So perhaps it was the delayed success of the films that in part allowed the Ministry to boast of a 27% increase of numbers a few years later. Film was used as a powerful tool to change perceptions of just what nursing was and join its ranks.