Your essential guide to the key sequences and technical wizardry of Abel Gance’s gargantuan historical epic Napoleon, a breathtaking milestone in film history. 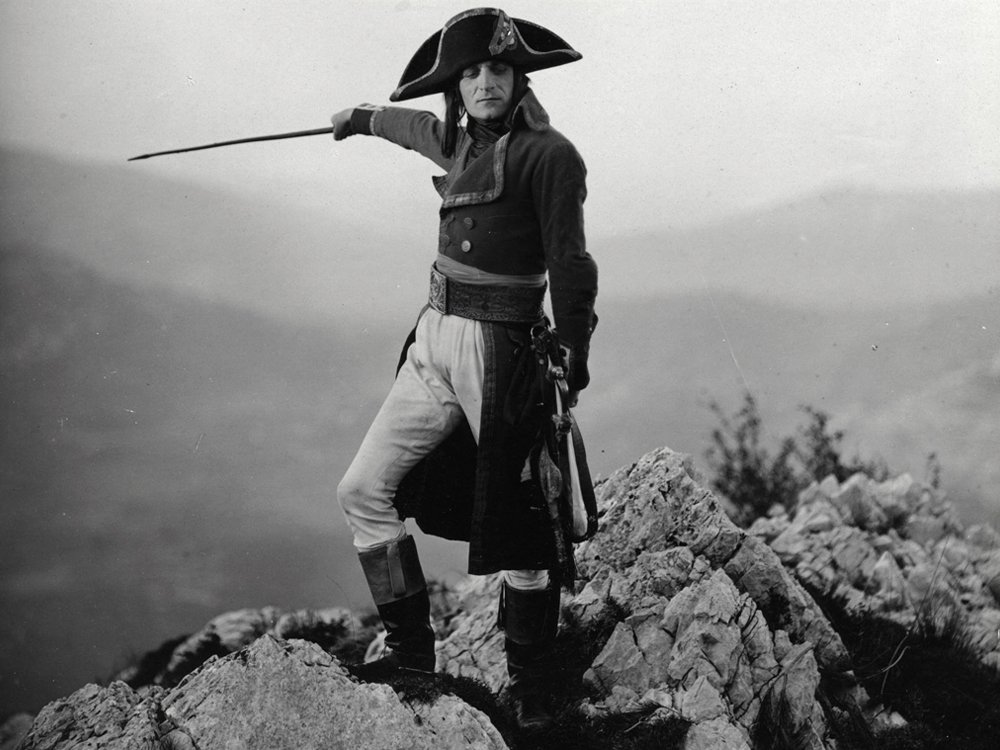 Abel Gance’s Napoleon (1927) is too big a movie to miss. This broad-beamed silent epic reportedly ran for nine hours in its original cut, which is even more impressive when you consider that it was conceived as merely the first film in a six-part biography.

Napoleon is huge in ambition as well as scale: Gance pushed at the boundaries of the biopic, introducing cinematic innovations at every turn. Many of the tricks he used in Napoleon were never to be repeated, while others – such as his pioneering widescreen format and ‘handheld’ photography – were just decades ahead of their time.

Film historian Kevin Brownlow embarked on an epic undertaking himself when he began to restore the film from fragments in the 1960s. Now he has compiled a staggering, near-complete five-and-a-half-hour cut, complemented by an orchestral score from Carl Davis.

The new digital restoration of Napoleon will screen at the Royal Festival Hall with Davis conducting the Philharmonia Orchestra, and in cinemas across the country. It’s being released on DVD/Blu-ray too. That means more people than ever before will have the chance to experience Napoleon. Here’s what you should look out for in this colossal film.

The film begins with the hero conducting his troops in a battle. But this is Napoleon the schoolboy, and the weapons are snowballs. From his icy trench, Napoleon can see that his ‘men’ are pitifully outnumbered, but he concocts a strategy to lead them to victory regardless.

Equally resourceful, Gance shoots this prophetic scene with artistic flourishes enabled by technological creativity. The rapid cutting he had used so powerfully in La Roue (1923) returns, and the footage itself has been shot on a variety of rigged cameras – one strapped to a toboggan, one that spins in a circle, another that plunges down a frame grimly inspired by a guillotine.

The ‘fusil viseur’, or ‘photo gun’, allowed the operator to capture fast movements by angling a mirror in front of the camera lens, instead of shifting the camera itself. As Gance put it: “The camera becomes a snowball … it is in the fortress and fights back.” However, he denied the rumour that some shots were achieved by chucking around a camera in a football.

Another schoolboy scuffle, but this time in the dormitories. One of the young extras recalled the experience as a “splendid brawl” and Gance captures the playful excitement of the fight (Jean Vigo paid tribute in his 1933 classic Zéro de conduite), in a stunning, multifaceted sequence. As the pillows burst, so does the image. 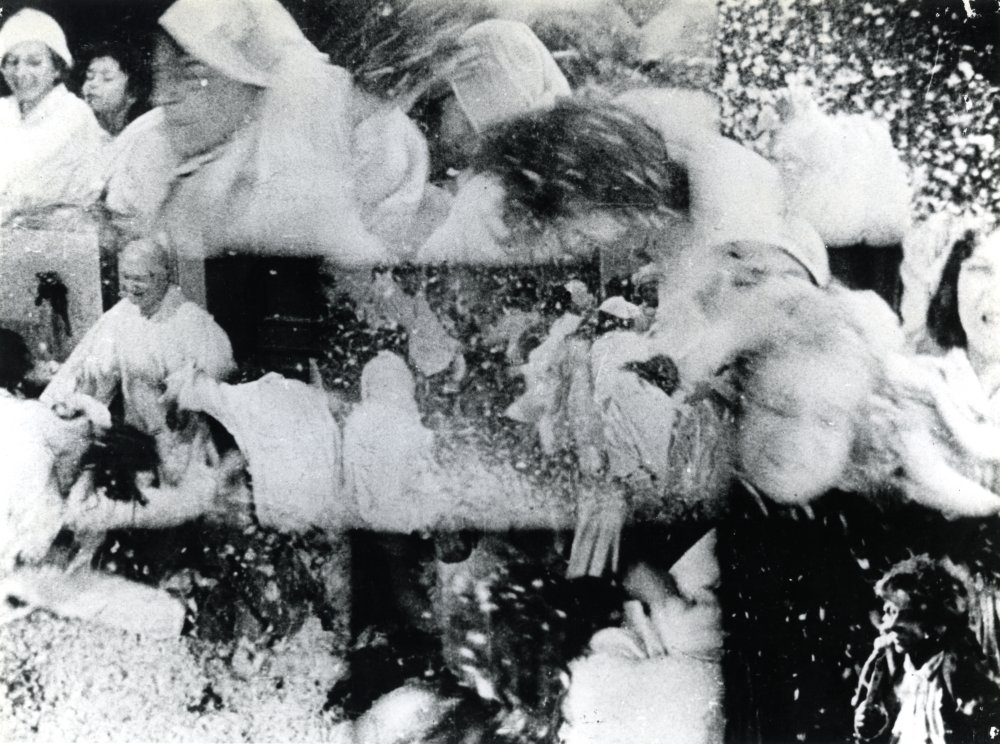 The fight is shown in split-screen setups, with four or nine compartments at a time. This effect had to be accomplished ‘in camera’ with tiny shutters masking off parts of the frame, before the film was wound back to shoot another exposure. After the chequerboard come spinning superimpositions, with as many as 16 different images on screen at once.

In Napoleon, Gance hoped to take the audience from a mere spectator to a player in the action. Handheld cameras were a few years away from reality, though, and the cumbersome alternative was for his cameramen to wear heavy, motorised cameras strapped to their chests, connected by a cable to a portable generator on a truck. 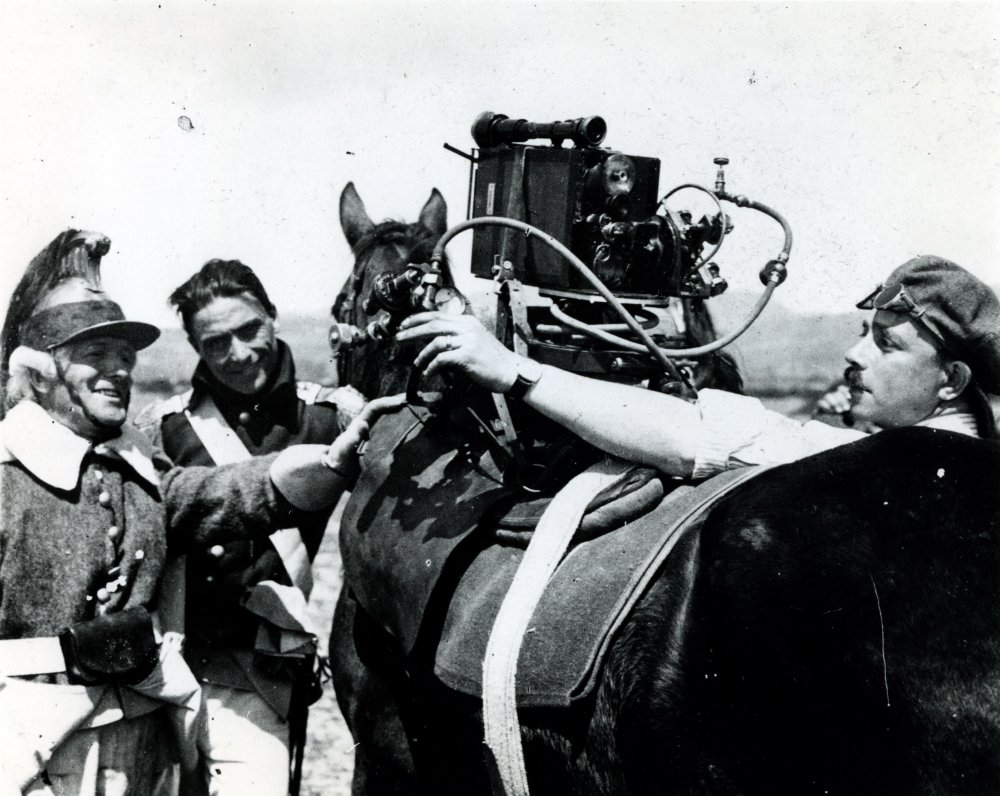 In this scene in Corsica, Bonaparte (played as an adult by Albert Dieudonné) is pursued on horseback, and the cameras, equipped with wide-angled lenses, had to go faster than the cameramen could carry them. The scene was inspired by the ride of the Klan sequence in The Birth of a Nation (1915), but Gance naturally wanted to outdo D.W. Griffith. To keep pace with the chase, three cameras were fixed to a car, and another on a horse. The chief cameraman rode alongside the camera-horse, operating a compressed-air motor to power the equipment.

Many of Gance’s background players were striking workers from the nearby Renault factory, and he fired them up with enthusiasm before shooting, feeling that extras needed to be in a trance-like state to inhabit their roles.

For the scene in the hall where the Marseillaise is first performed, Gance asked the extras to sing the revolutionary anthem 12 times in a row, and on no account to look directly upwards, where cameras tracked above their heads on wooden rails, capturing their impassioned faces.

Brownlow, who knows the film better than anybody, says that this sequence still amazes him. At the close of the first act, Bonaparte is making his escape from Corsica on a stormy sea, while miles away in Paris, political turmoil rocks the convention. “I decided to give the camera the movement of a wave,” said Gance. His cross-cutting between the two locations creates a link between the two events, but it is the swooping camera, mounted on a pendulum over 1,200 extras in the convention, that does most to connect the two locations, and provoke the audience into sympathetic terror.

The death of Marat 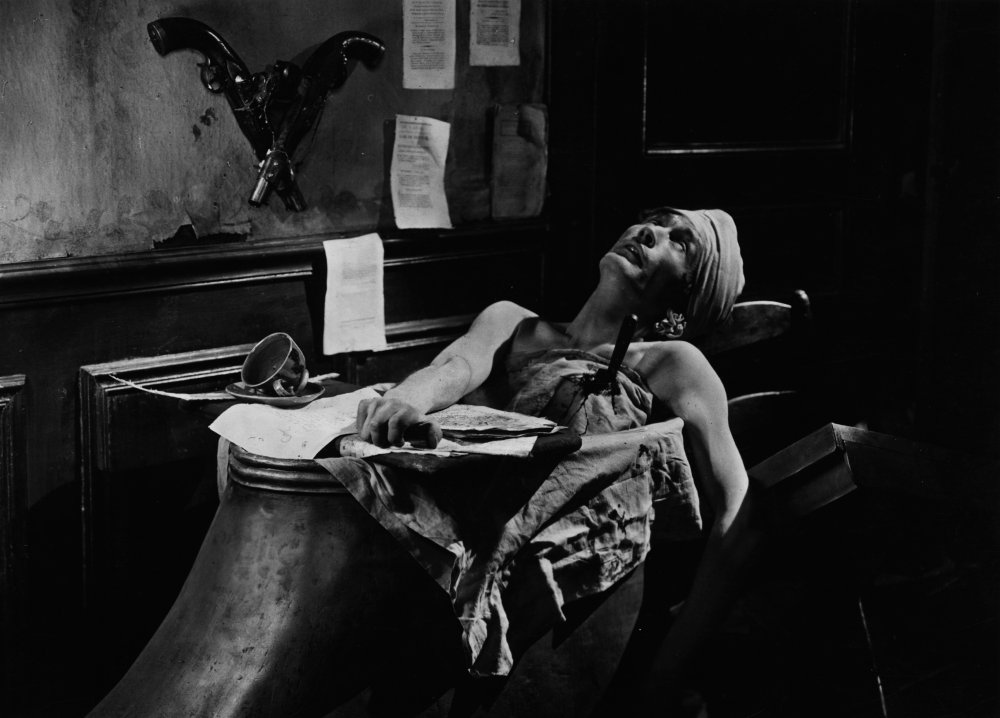 At the beginning of act two, the revolutionary journalist Jean-Paul Marat (hauntingly played by the avant-garde writer Antonin Artaud) is assassinated: stabbed in his bathtub by Charlotte Corday. Gance lights the aftermath of his murder in the manner of the famous painting by Jacques-Louis David, ‘The Death of Marat’, emphasising the hollows in Artaud’s face. Gance compiled huge amounts of research for the film, and other compositions echo the engravings from Victor Hugo’s novel Ninety-Three, itself a big influence on the screenplay.

The siege of Toulon

The gruesome, fierce battle at Toulon takes up most of the second act. Just as with the snowball fight, Bonaparte battles impossible odds. His plan to attack at night and in driving rain fails at first but ultimately succeeds in driving back the English. Capturing the scene was near-impossible too – as silent-era film stock did not cope well with low light, or capturing rainfall (large grains of salt were used for hailstones).

Stomach-churning highlights include a soldier drowning in the slime and the moment a rolling cartwheel crushes an ankle. There were casualties among the crew, when an accidental explosion burned and temporarily blinded nine men, including Gance, who was unperturbed. “Films are something great, mysterious and sublime,” he said, “for which one should not spare any effort and for which one should not fail to risk one’s life if the need arises.”

As the great and good of Paris dance on the graves of the victims of the Terror, chest-mounted cameras sway and tilt with the crowd, using soft-focus lenses to capture the shimmering glamour of the guests. The result is a little eerie, as the man once charged with reading out the names of the condemned reads out the delicacies on the extravagant menu instead, and grotesque costumes poke fun at the violence of death by guillotine. It is merely a flattering coincidence that the Grecian-inspired draped dresses of the time are in accord with 1920s fashion.

This film is very far from a romance, but Bonaparte’s relationship with Josephine is central to the narrative. In act three, their relationship hurtles towards marriage. For Josephine, played with a pointed charm by Gina Manès, this will be more or less a match of convenience, and note how Gance shows Bonaparte’s growing obsession with Josephine in visual terms, but always in tandem with his military strategies and his aspirations to empire-building. He kisses the globe that her face is superimposed on, and multiple exposures of Josephine fill the office where he sketches his plans for the conquest of Italy.

“I felt that I lacked space in certain scenes, because the picture was too small for me,” said Gance. “Even a big picture was too small for me.” Enter ‘Polyvision’. At the close of the film, as Bonaparte’s ragged troops begin to march, the image expands to three times its original width, capturing a panoramic sweep across the camp, and then a kaleidoscope of imagery, featuring Bonaparte, Josephine, his empire, his eagle and his men, in pulses of red, white and blue. It’s a victorious, and poetic finale. The panoramas were achieved by stacking three cameras on top of each other, one pointed to the left, one straight ahead and one to the right. To screen the triptych finale on film requires a huge screen, three projectors, perfect timing and a projectionist with nerves of steel. And, of course, an auditorium vast enough to house Gance’s Napoleonic ambition.

Watch the trailer for the digitally restored version of Napoleon (1927)