The great Mildred Pierce bake off

Hot pies and killer martinis… why the new restoration of noir melodrama Mildred Pierce provides the perfect inspiration to get baking. 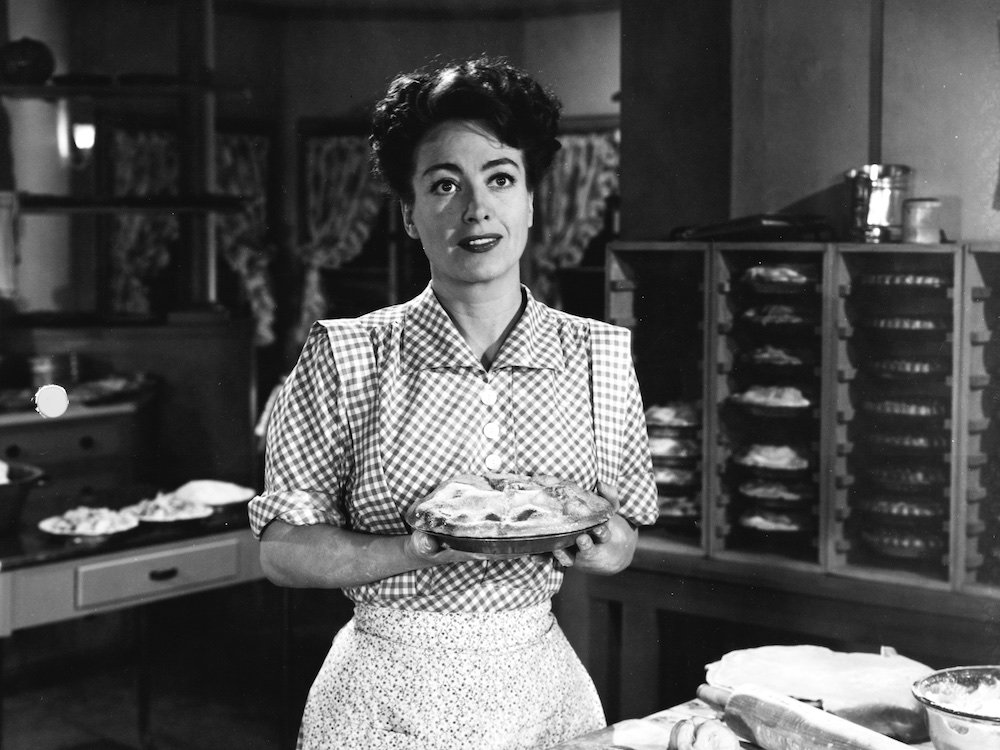 “I’m planning on opening a place of my own. There’s money in a restaurant”

While Joan Crawford, in an Oscar-winning performance, is the unquestionable star of Mildred Pierce (1945), food should surely be awarded a prize for its supporting role. Mildred’s cooking drives the film’s plot and is inextricably linked to her desire to please her spoilt daughter, Veda (Ann Blyth). Mildred starts by baking birthday cakes for neighbours to plug gaps in the family income and ends up building a restaurant empire in order to keep Veda in the lifestyle to which she would like to become accustomed.

Despite having a noir murder mystery framework overlaid onto the maternal melodrama of James M. Cain’s 1941 source novel, the author’s behind-the-scenes painstaking detailing of restaurant work (described by the Los Angeles Times as “practically a how-to book on starting a restaurant in LA”) does carry through to Curtiz’s film – although not quite to the extent that it so gloriously did in Todd Haynes’ 2011 TV mini-series.

Mildred is driven to diner waitressing after being left by her husband Bert. Typical of many women of her generation, she only has a basic education and her main skillset is around domestic work. As Crawford’s voiceover tells us: “I married Bert when I was 17. I never knew any other kind of life. Just cooking and washing and having children.” 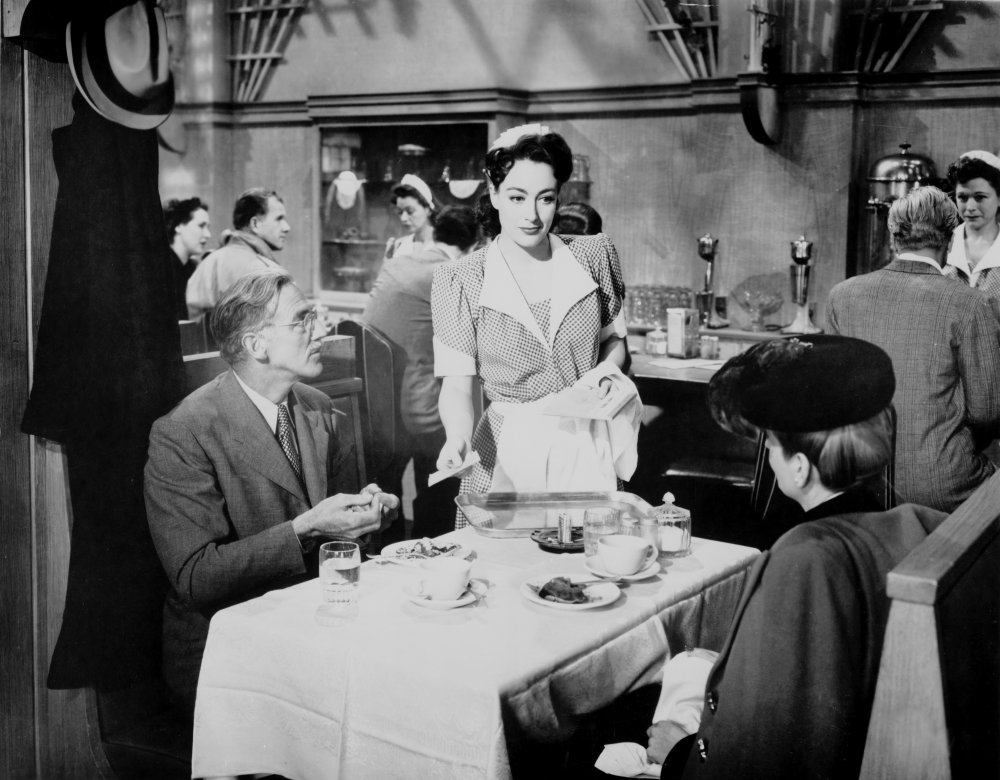 She keeps her new job secret from the snobbish Veda, but clearly takes pride in her transition from ingénue to expert: “In three weeks I was a good waitress, in six weeks I felt like I’d worked in a restaurant all my life. And in three months I was one of the best waitresses in the place.”

When Veda discovers her mother’s clandestine career she loses no opportunity to humiliate her. Mildred attempts to rescue the situation by telling Veda she’s only waitressing to learn the business in preparation for opening a restaurant of her own. “Will we be rich?” asks a suddenly enthusiastic Veda.

Mildred discovers her skills as a businesswoman, researching property prices (she’s able to get a bargain due to the Depression), footfall and potential competition. And by baking pies for the diner Mildred is able to build both her savings and a wholesale customer base.

She’s soon ready to open Mildred’s, an all-American restaurant selling chicken and waffles, with her signature pies – peach, pumpkin, cherry and apple – to follow. Given the current popularity of fried chicken and comforting, homely cooking, Mildred’s instincts seem spot on. Times of economic uncertainty support simple and cost-effective dishes, and this is reflected in the instant success of her food. But as Mildred’s business grows, and she opens several more restaurants, the profession that has been her means to success gradually morphs into a weapon that is used against her. 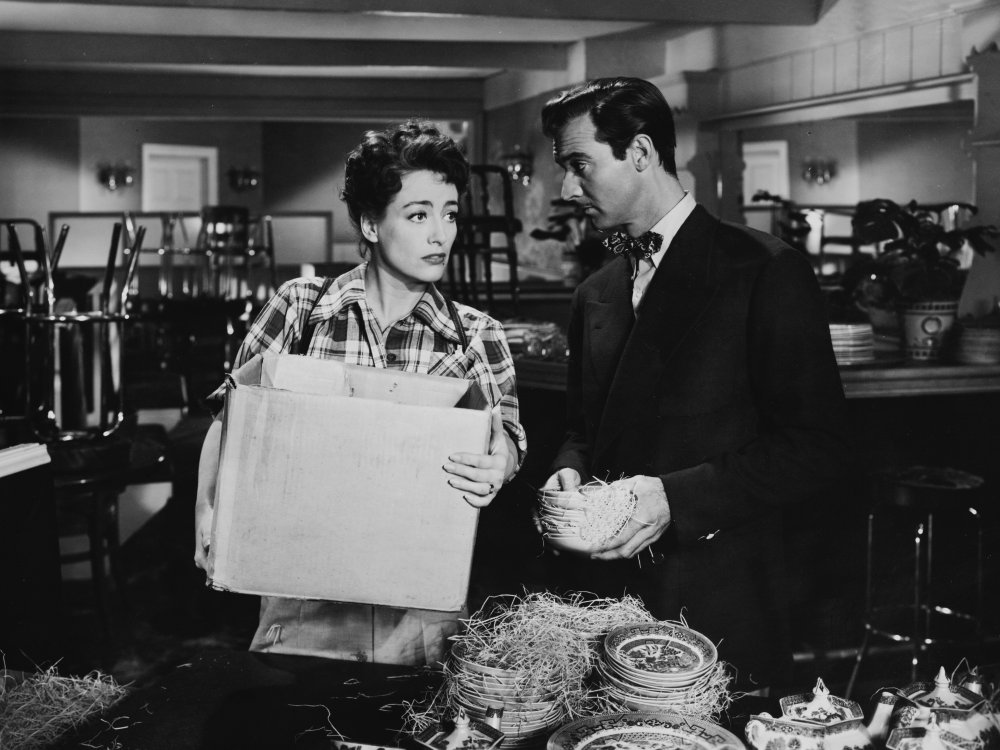 When Mildred first meets handsome playboy Monte Beragon (Zachary Scott), he’s charming and in control, while she’s a smart and attractive working woman trying to make good (a very common characteristic of Crawford’s roles). After becoming wealthy, Mildred marries Monte not for his money but for his social cache, in the hope that this will please Veda. Mildred soon finds out that Monte has little hard cash of his own and is more than willing to live off her hard work – something that he has in common with Veda. Both take money from Mildred while despising its origins, but Mildred allows Monte decidedly less leeway, telling him: “I don’t notice you shirking away from a 50 dollar bill because it smells of grease.”

In a familiar noir trope, Monte is emasculated by Mildred’s strength and drive – except here we side with Mildred, the ostensible femme fatale. Resentful of her financial power over him, Monte uses class to retaliate. As Mildred pays him off at the end of their relationship, he retorts: “Thank you, I’ve always wondered how it felt to take a tip.” Likewise, Veda knows how to hit out at her mother. She tells Mildred that she’s nothing but a “common frump” and that she wants to “get away from you. With your chickens and your pies and kitchens and everything that smells of grease.” 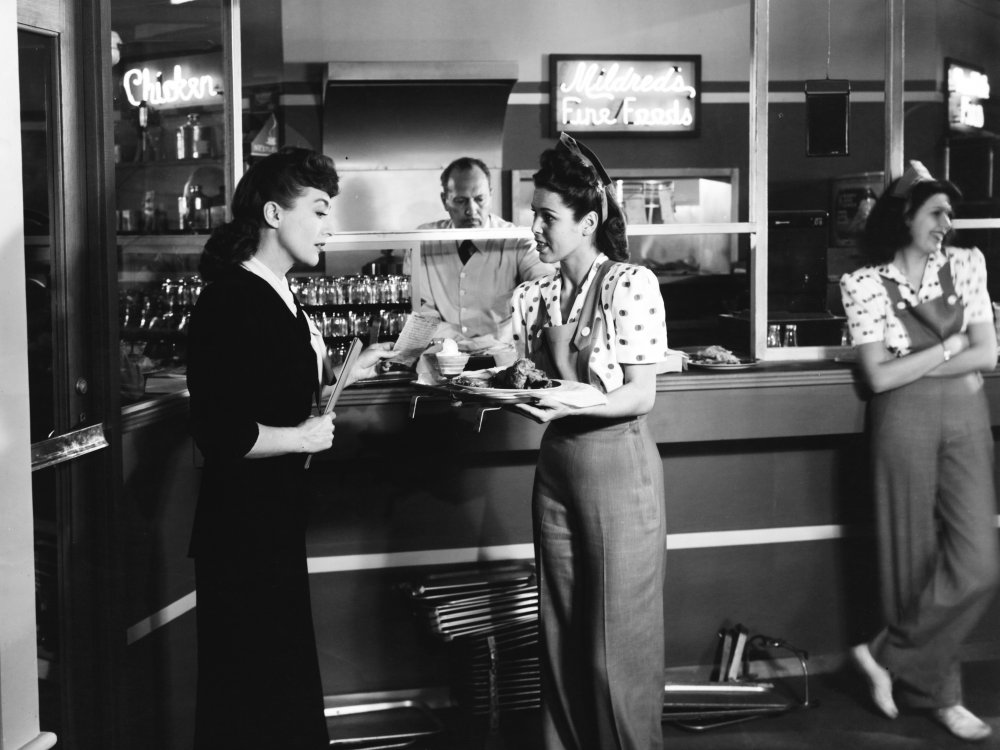 But one thing that everyone seems to forget, throughout all of this intense emotion, social climbing and murder, is that Mildred’s food is delicious (especially when served with one of Monte’s killer martinis). During shooting the smell of baking pies drew visitors to the Mildred Pierce set from all over the Warner Bros’ studio lot, and with our modern day appreciation of simple food cooked well, and love of celebrity chefs, it’s hard to not to think that Veda and Monte – with their snobbish disdain for Mildred and her profession – have got it very wrong.

Mildred Pierce treads a fascinating line between celebrating Mildred’s empowerment while showing how her misguided, obsessive love for her daughter brings her down. Mildred can never really enjoy her success because Veda does not, and she struggles to hold on to it for this reason.

However, for me, the most memorable images from the film are of an impossibly chic Joan Crawford in the fog (a scene which looks more beautiful than ever in this recent restoration), and perhaps even more indelibly of Mildred apron-clad in the kitchen, competently and happily managing a busy restaurant and taking pleasure in work done well. 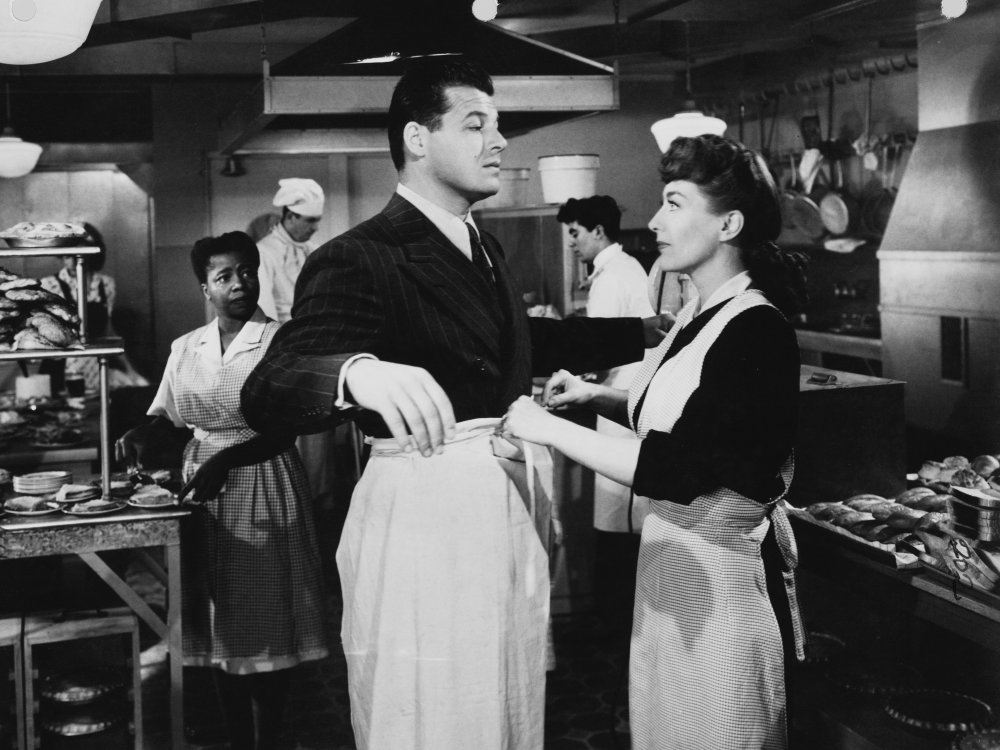 So in celebration of cook and career woman Mildred Pierce, and the new restoration of the film, why not try serving the following menu?

Monte: How do you like your drink?
Mildred: Oh, harmless…

Fill a jug or cocktail shaker with plenty of ice. Add 4 parts gin and 1 part vermouth (you can vary your gin to vermouth ratio depending on how dry you like your martini). Stir until everything is mixed and very, very cold (shaking is only for James Bond). Pour into a chilled cocktail glass and add a twist of lemon peel or a couple of green olives on a cocktail stick.

(To take the sting out of a couple of these on an empty stomach, I recommend serving Joan Crawford’s own ‘danti chips’, which sound weird but are actually quite good — basically tortilla chips with meat paste, chopped up gherkins and cheese. Check out Silver Screen Suppers’ Joan Crawford Cookbook for the recipe).

Recipe by Colin Flynn, food stylist for the 2011 version of Mildred Pierce.

Follow with a fruit pie, courtesy of an American cook and businesswoman almost as formidable as Mildred.